Colorectal cancer (CRC) is one of the most common malignancies in the world, and has a high morbidity and mortality rate (1,2). CRC is caused by multiple factors and multiple mechanisms, which are associated with abnormal cell signaling pathways, such as the Hippo/Yes-associated protein 1 (YAP1) pathway and the Wnt/β-catenin pathway (3,4). In the Hippo/YAP1 signaling pathway, the activation of YAP1 is associated with tumor acquisition of malignant characteristics, including anti-cancer therapy resistance, the metastasis of cancer stem cells, and epithelial-mesenchymal transformation (5-7). In addition, YAP1 has been shown to be associated with poor prognosis and reduced survival in many human cancers (8-10). Thus, YAP1 can be used as a marker of poor prognosis and drug resistance in cancers. In the Wnt/β-catenin signaling pathway, β-catenin can lead to tumor recurrence and treatment resistance (11,12). Secreted frizzled-related proteins (SFRPs) are a type of Wnt signaling inhibitor that are expressed at significantly reduced levels in a variety of cancers and are associated with poor disease progression and prognosis (13,14). SFRPs can be used as non-invasive biomarkers for the early diagnosis of CRC (15).

In the present study, we investigated correlations among the expression of YAP1, SFRP2, and β-catenin, and the effects of YAP1 and SFRP2 on the proliferation and apoptosis of CRC cells. The aim of the study was to elucidate the mechanism underlying CRC development and progression and provide novel strategies for its treatment. We present the following article in accordance with the MDAR reporting checklist (available at https://dx.doi.org/10.21037/jgo-21-418).

SW480 cells (BeNa Culture Collection, Beijing, China) in the logarithmic growth phase were seeded into 24 well plates. The cells were cultured to ~70% confluence, and then transfected with 6 promoter plasmids (ZHBY Biotech Co., Ltd, Jiangxi, China) using Lipofectamine™ 3000 Transfection Reagent (Invitrogen™, USA) in accordance with the manufacturer’s protocol. Fresh medium was added to each well after transfection for 6 hours. Fluorescence signals were observed after transfection for 48 hours.

The gene expression vectors of YAP1 and SFRP2 were constructed using the screened promoters and packaged with lentivirus (ZHBY Biotech Co., Ltd, Jiangxi, China). Subsequently, the multiplicity of infection (MOI) values of different gradients were set to select the MOI values with the best cell status and the strongest fluorescence expression after lentivirus infection. After the cells were infected with the optimal concentration of lentivirus, the overexpression efficiency was verified by quantitative polymerase chain reaction (qPCR) and Western blot.

For the co-immunoprecipitation assay, we used the Pierce™ Classic Magnetic IP/Complex Immunoprecipitation (Co-IP) Kit (Thermo Fisher Scientific,88804) in accordance with manufacturer’s protocol. 200 µL of cell lysate was incubated with a mixture of 20 µL of protein A/G beads and 5 µL of conjugated antibody to YAP1/SFRP2 at 4 °C overnight with rotation. The beads were then washed with IP (Immunoprecipitation) lysis/wash buffer and PBS. 200 µL of elution buffer was added to the beads, which were incubated at room temperature and mixed for 5–10 minutes. The supernatant was transferred to a new tube. Finally, the samples were loaded onto a SDS-PAGE gel for a western blot analysis.

Cells grown on coverslips were fixed with 4% paraformaldehyde and blocked with 5% BSA. The cells were then incubated with a mixture of 2 primary antibodies (Rabbit Anti-YAP1, 1:200 and Mouse Anti-SFRP2, 1:100/1:200) at 4 °C overnight. The cells grown on coverslips were washed with PBS and incubated with a fluorescent labeled secondary antibody (Goat Anti-Rabbit and Anti-Mouse IgG, 1:100, ABclonal Technology Co., Ltd., Wuhan, China) in the dark for 30 minutes at 37 °C. The nuclei were counterstained by 4’,6- diamidino-2-phenylindole (DAPI, Key GEN BioTECH Co., Ltd, Jiangsu, China). Images were captured using a fluorescence microscope (OLYMPUS, CKX53).

CRC cells were seeded in 96-well culture plates (Corning, Shanghai, China). A total of 10 µL CCK8 reagent (KeyGEN BioTECH Co., Ltd, China) was added to each well and incubated for 4 hours. The absorbance was measured at 450 nm using a microplate reader.

The CRC cells were washed with PBS and collected after centrifugation at 1,500 ×g for 3 minutes. The cells were remixed with 500 µL ice-cold 1× binding buffer. Then, 5 µL of Annexin V-APC and 10 µL of 7-AAD (Multi Sciences Co., Ltd, Hangzhou, China) were added to each tube, and the cells were incubated in the dark for 10 minutes at room temperature. Cell apoptosis was detected by NovoCyte™ flow cytometry (ACEA BIO Co., Ltd, Hangzhou, China). 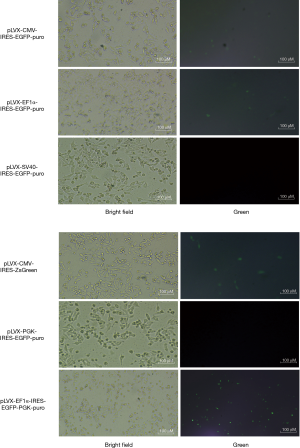 Figure 1 Promoter screening (100 µm). The fluorescence expression level of pLVX-EF1α-IRES-EGFP-PGK-puro in SW480 cells was significantly higher than that of the other plasmids.

The construction of overexpressed cell lines 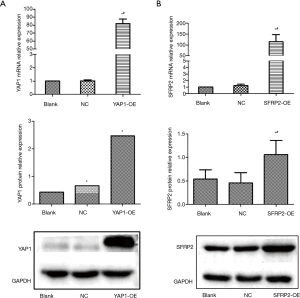 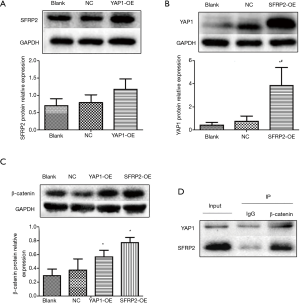 A Western blot analysis was performed to determine the effects of SFRP2 on YAP1 expression at the protein level. The expression of YAP1 was upregulated in SFRP2 overexpression group (see Figure 3B). The results suggest that SFRP2 may be an upstream regulator of YAP1 in CRC.

The localization and expression of YAP1 in SW480 cells 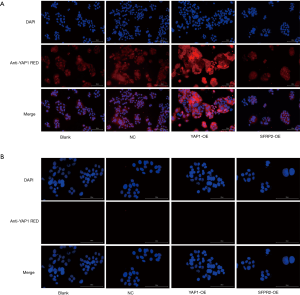 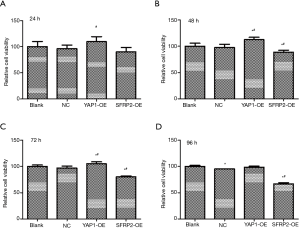 CRC is one of the most common malignancies in the world, and has a high fatality rate (16). At present, the molecular basis of colorectal tumor formation is still not fully understood. In recent years, with the development of modern molecular biology, the exploration of the molecular mechanism and targeted therapy of CRC at the gene level has become a popular area of research. YAP1 is a powerful regulator of tumor cell proliferation, and is closely related to the formation and development of a variety of tumors (17,18). Many YAP1/TEAD (TEA domain family member) target genes are also associated with tumor progression, including baculoviral IAP repeat containing 5 (BIRC5), cyclin D1 (CCND1), and forkhead box M1 (FOXM1) (6,17,18). Of these, FOXM1 is highly expressed in a variety of human cancer cells (6,17,18). The Wnt signaling pathway is one of the key cascades in regulating organ development and stem cell properties and is closely associated with cancer, most notably CRC (19). SFRPs inhibit the abnormal activation of the Wnt pathway and inhibit cell proliferation (20,21). Thus, research that examines how YAP1 and SFRP2 are involved in the molecular mechanisms and biological behaviors of CRC cells may provide new evidence of novel diagnostic and prognostic biomarkers and therapeutic targets for CRC.

In conclusion, there may be an interaction between the Hippo/YAP1 pathway and the Wnt/β-catenin pathway in CRC. YAP1 and SFRP2 are involved in the formation and development of CRC. These findings indicate that YAP1 or SFRP2 may be promising targets for CRC treatments in the future.

Funding: This study was supported by the Natural Science Foundation of Anhui Province (1808085MH283) and the Doctoral Research Funded Project of the Anhui Medical University (XJ201614).

Reporting Checklist: The authors have completed the MDAR reporting checklist. Available at https://dx.doi.org/10.21037/jgo-21-418

Conflicts of Interest: All authors have completed the ICMJE uniform disclosure form (available at https://dx.doi.org/10.21037/jgo-21-418). All authors have reported that this work has received funding from the Natural Science Foundation of Anhui Province (1808085MH283) and the Doctoral Research Funded Project of the Anhui Medical University (XJ201614). The authors have no other conflicts of interest to declare.

Ethical Statement: The authors are accountable for all aspects of the work in ensuring that questions related to the accuracy or integrity of any part of the work are appropriately investigated and resolved. The study was approved by Fuyang Hospital of Anhui Medical University (No. KY2021015). The study was conducted in accordance with the Declaration of Helsinki (as revised in 2013). Informed consent was waived.