In China, gastric cancer is a common malignant tumor of the digestive tract, and surgery is the main method used to treat advanced gastric cancer. In recent years, laparoscopic radical gastrectomy (LRG) has become a common method for the treatment of gastric cancer worldwide, with the advantages of light pain, small trauma and quick recovery (1-3). However, anatomic variations of perigastric vascular structures increase the difficulty of laparoscopic surgery, and the lack of tactile sensation in laparoscopic surgery increases the risk of vascular injury, particularly venous injury (4,5).

The left gastric vein (LGV), also known as the coronary gastric vein, is one of the important vessels requiring dissection in LRG, and is usually incorporated into the portal vein (PV) or splenic vein (SV) (5,6). Therefore, accidental injury to the LGV during surgery can result in significant blood loss. Previous studies of the LGV have focused on imaging and anatomy, and lack physical observation. At present, there is relatively small guidance for laparoscopic surgery. Therefore, laparoscopic anatomical classification of the LGV has a direct guiding significance for surgery, which can quickly improve the level of laparoscopic surgery among young physicians and provide greater benefits to patients. In this study, we observed and analyzed the anatomical classification of the LGV in patients undergoing LRG and explored its clinical significance. We present the following article in accordance with the STROBE reporting checklist (available at https://dx.doi.org/10.21037/jgo-21-352).

This retrospective study aimed to observe and analyze 230 LRG videos stored at the Department of Gastrointestinal Surgery, Guangdong Provincial Hospital of Chinese Medicine, from January 2016 to December 2020. Of these, six patients were found to have LGV deficiency intraoperatively, and another six were found to have extensive adhesions or intraoperative major hemorrhage and open laparotomy. In one patient, the common hepatic artery (CHA) was not found during the operation. A total of 217 patients were included in this study. All procedures performed in this study involving human participants were in accordance with the Declaration of Helsinki (as revised in 2013). The study was approved by regional ethics board of Guangdong Provincial Hospital of Chinese Medicine (NO: ZE2021-173-01). Individual consent for this retrospective analysis was waived.

LRG involved laparoscopic distal, proximal, and total gastrectomy, with D2 to D2+ lymph node dissection (LND) performed according to the third Japanese gastric cancer treatment guidelines (7). All surgical procedures were recorded on a laparoscopic video system, and were performed by a deputy chief physician (or above) in our department.

Classification and nomenclature of the LGV variants

The general data, pathological characteristics, and surgical data of the 217 included patients are shown in Table 1. The LGV of each type is shown in Figure 1, and the schematic diagram of each type of LGV is shown in in Figure 2. Among these, type Ia was the most prevalent (i.e., where the LGV runs between the CHA (posterior) and the CA into the portal venous system), accounting for 55.8% (n=121). Of the remaining patients, types II, III and IV accounted for 16.6%, 21.1%, and 5.5%, respectively (n=36, 48, and 12) (Table 2). Three patients (1.3%) had double LGVs, and the most common types for the larger LGVs were types I (n=3). In 21 (9.7%) patients, the LGV was injured during LRG, and the incidence of LGV injury hemorrhage was different among different types. Among them, type I LGV injury involved the largest number of bleeding patients, but its injury bleeding rate was only 5.8% (7/121). Although the number of type IV LGV injury bleeding patients was lower, its injury bleeding rate was as high as 41.7% (5/12) (Table 3). 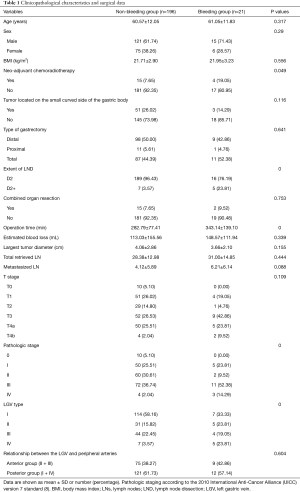 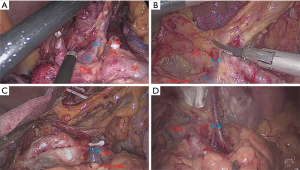 Figure 2 Course of the LGV identified by the anatomic relations to the peripheral arteries and the pancreas. I, II, III, IV, If the patient has two or more LGVs, the type of LGV is determined by the largest branch.

Table 2 Anatomical type and frequency of the LGV
Full table 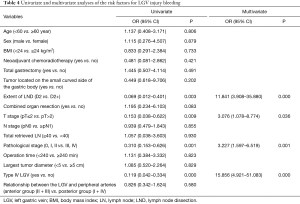 None of the 16 patients with LGV injury-induced bleeding were transferred to laparotomy due to uncontrolled hemorrhage. Furthermore, none of the patients had postoperative bleeding-related complications, and all were successfully discharged after the operation.

Zhi et al. (13) first summarized the anatomical relationship between the LGV and peripheral arteries (CHA/SA) and the pancreas of 100 patients who underwent LRG in China. They found that the LGV walking behind the CHA (45.5%, 40 cases) was the most common anatomical type. However, Lee et al. (14) observed the videos of 405 patients who underwent LRG and found that there were six main anatomic relationships between the LGV and peripheral arteries [CHA/SA/left gastric artery (LGA)] and the pancreas. The LGV running behind the CHA accounted for 48.1% (n=195). In LRG, whether it be total, distal, or proximal gastrectomy, involves the dissection of the No. 7, 8a, 9, and 11p LNs. When dissecting the LNs around the CHA, SA, and CA, LGV is around these arteries and is easily injured (resulting in bleeding). The LGA is the most important blood vessel of the stomach. When LNs are dissected, the LGA must be cut off, and the CA, CHA, SA must be preserved. Therefore, the LGA has less influence on the injury to the LGV, and analysis of the relationship between the LGV and peripheral arteries (CA/CHA/SA) and the pancreas is of greater clinical significance in this study. At the same time, we found that the LGV running between the CHA (posterior) and the CA into the portal venous system is the most common anatomical type.

In this study, the incidence of hemorrhage in LGV injury was 9.7% (n=21), while that of IV LGV being easily injured (resulting in bleeding) was as high as 41.7% (5/12). Lee et al. (14) found that 49 cases (13.0%) had bleeding from LGV injury, while the LGV had a higher risk of bleeding from injury before or after the SA (17.8%), which might be due to the increased anatomical difficulty caused by the hunched uplift of the pancreas. The LGV, which runs in the anterior part of the LGA, has the lowest probability of hemorrhage, which may be related to the easy detection of the LGV and the simple dissection of LNs. However, according to the risk factor analysis of LGV injury, LGV injury hemorrhage was not associated with the relationship between the LGV and peripheral arteries. If a LGV runs between the CHA/SA (posterior) and the CA into the portal venous system, it will increase the difficulty of the LRG operation. It is possible that the LGV entry point on the posterior aspect of the artery and the hunched bump of the pancreas were obscured, thus increasing the difficulty of the procedure. Therefore, for a LGV that runs behind the CHA into the portal venous system, we choose to actively expose the root of the PV and the LGV below the angle between the CHA and the gastroduodenal artery (GDA) during the dissection of LNs, which can effectively reduce the injury and hemorrhage of LGV. In this study, type I LGV injury has the largest number of bleeding patients, but its injury bleeding rate was only 5.8% (7/121).

The extent of LND and pathological stage were found to be significantly associated with LGV injury and hemorrhage (P<0.05). Patients undergoing extended LND (D2+) tended to have a late pathological stage, and there may have also been more LN metastasis around the CA and its branches. Therefore, the surgical difficulty increases accordingly, which increases the risk of bleeding from perigastric vascular injury, including the LGV. Among the 21 patients with LGV injury and hemorrhage, five underwent enlarged LND (D2+), including two patients who received omental sac excision and three patients who received para-aortic LND. The operative time and dissection of positive LNs were also higher in the non-bleeding group. Similarly, later pathological stage was considered as an independent risk factor for LGV lesion bleeding during LRG (OR =1.87, 95% CI: 0.81–0.4.38) (14). T staging of gastric cancer directly affects the surgical difficulty, and T stage was found to be an independent risk factor for bleeding from LGV injury. A T stage of T3 or T4 will limit the pull and exposure of the operation, thus increasing the difficulty of LND. Also, a tumor located on the small curved side of the gastric body will further increased the difficulty of No.7, 8a, and 9 LNDs, thereby increasing the risk of LGV injury and bleeding. However, in this study, the injury and bleeding of LGV was found to be independent of tumor location. In addition, the metastasis of No. 7, 8a, and 9 LNs in N staging also affected the dissection of the LGV. However, this was a retrospective study, and No. 7, 8a, and 9 LNs were divided into independent groups in the previous surgery.

Certainly, LGV injury and hemorrhage were also related to the degree to which the main surgeon was familiar with the anatomy of the perigastric vessels under laparoscopy, as well as the traction, exposure of assistant, laparoscopic system, and surgical instruments, etc. At present, the impact of bleeding from LGV injury on the outcome of the procedure is unknown. Although the operation time of patients with LGV injury bleeding under laparoscopy is prolonged and intraoperative blood loss is increased, in addition to anatomical location of LGV, numerous factors determine the surgical results. Therefore, further clinical study is required to identify methods of reducing the effect of LGV injury on the operation.

This study had some limitations that should be noted. Firstly, this was a retrospective, single-center study with a small number of cases included. Secondly, we chose to actively expose the root of the PV and the LGV below the angle between the CHA and the GDA while also cleaning up the NO.8p LNs, whether it would increase the number of positive lymph nodes. The survival prognosis of patients also requires further research.

Reporting Checklist: The authors have completed the STROBE reporting checklist. Available at https://dx.doi.org/10.21037/jgo-21-352

Conflicts of Interest: All authors have completed the ICMJE uniform disclosure form (available at https://dx.doi.org/10.21037/jgo-21-352). The authors have no conflicts of interest to declare.

Ethical Statement: The authors are accountable for all aspects of the work in ensuring that questions related to the accuracy or integrity of any part of the work are appropriately investigated and resolved. All procedures performed in this study involving human participants were in accordance with the Declaration of Helsinki (as revised in 2013). The study was approved by regional ethics board of Guangdong Provincial Hospital of Chinese Medicine (NO: ZE2021-173-01). Individual consent for this retrospective analysis was waived.