Hepatocellular carcinoma (HCC) has been identified as the 6th most common cancer in the world, and has the 4th highest mortality rate among all types of cancer (1). In 2018, an estimated 841,000 new cases of liver cancer were reported globally (1). Currently, there are many treatments for liver cancer, but its prognosis remains unsatisfactory (2,3). HCC remains a great threat and challenge to human health. Thus, new treatments need to be found for HCC urgently.

In a recent study, the development of HCC was found to be closely associated with various genes and abnormal activations of signaling pathways (4). Hepatocarcinogenesis is not only associated with protein-coding genes, but is also involved in non-coding ribonucleic acids (RNAs) (5). MicroRNAs (miRNAs) are endogenous non-coding RNAs that are composed of 18–24 nucleotides (6). It is thought that more than 60% of the genes that encode proteins are managed by miRNAs (5). Recent reports have suggested that miRNAs regulate HCC progression by acting as tumor promoters or suppressors (7-9). For example, miR-140-3p can suppress the expression of epithelial-mesenchymal-transition (EMT)-associated proteins by targeting the mitogen-activated protein kinase (MAPK) signaling pathway (10). MiR-382 has been reported to play an important inhibitory role in non-small cell lung cancer (11). Additionally, miR-494 has been shown to have suppressive effects on epithelial ovarian cancer and may be a new prognostic marker (12). However, the underlying biological function and potential molecular mechanism of miR-744-5p in HCC progression remain an enigma.

Transforming growth factor-beta (TGF-β) is a well-known signaling pathway that is overexpressed in advanced and highly metastatic HCC tissues (13,14). Recent studies have shown that the TGF-β signaling pathway is involved in liver fibrosis and hepatocarcinogenesis (15). Additionally, TGF-β signaling was shown to regulate tumor apoptosis, proliferation, EMT, and invasion in the progression of liver cancer (16-18). Our previous study also showed that TGF-β receptor I serves as a target for miR-4458 and activates drosophila mothers against decapentaplegic2/3 (Smad2/3) and thus mediates HCC development (19).

In this study, we detected miR-744-5p expression in HCC cells and analyzed its effect on the clinical stages of HCC. We found that miR-744-5p suppresses HCC cell proliferation and metastasis. Next, we explored how miR-744-5p regulates HCC progression via the TGF-β1/Smad axis. In addition, the relationships between miR-744-5p and TGF-β1 were validated by a western-blot assay and a luciferase activity reporter assay. We present the following article in accordance with the MDAR reporting checklist (available at https://dx.doi.org/10.21037/jgo-21-319).

The miRNA mimics of the negative control (NC mimics) and miR-744-5p were obtained from GenePharma (Shanghai, China). The TGF-β1 overexpression plasmid (pcDNA3.1-TGF-β1) and the corresponding empty plasmid (pcDNA3.1-NC) were constructed by HanBio (Shanghai, China). The HCC cells were then transfected with Lipofectamine 2000 reagent (Invitrogen, Carlsbad, USA). The transfected cells were collected after 48 h.

To detect cell viability, CCK-8 assays were conducted as directed by the manufacturer (CCK-8 solution; Dojindo, Japan). Transfected HCC cells were seeded into 96-well plates (2×103 cells/well) and cultured in an incubator for 0, 24, 48, and 72 h. The CCK-8 reagent of each well was replaced at different time points and continued to be cultured for 4 h. Finally, we measured the absorbance at 450 nm using the Multiskan Spectrum (Thermo Fisher, Rockford, IL, USA).

Transfected HCC cells were re-seeded onto 6-cm plates with 500 cells/plate and were cultured in a complete medium for 14 days to allow a single cell to grow into a population that could be seen with the naked eye. Next, 3.7% of methanol and 0.1% of crystal violet were used to fix and stain the plate.

The HCC cells were transfected with NC mimics or miR-744-5p mimics and re-seeded into 6-well plates. Next, 10-µL sterile pipette tips were used to make cell scratches. The scratches were captured using a microscope at 200× magnification after phosphate-buffered saline rinsing. Images of the scratches were taken after 24 h of incubation. Finally, the ImageJ system (NIH, Bethesda, USA) was used to analyze the distance that the cell has migrated.

The ability of the cells to migrate or invade was examined using a Transwell assay. The transfected cells were re-suspended in a serum-free medium and inoculated into the upper part of the 8-µm pore size chambers (Costar, Cambridge, USA), which were either coated or not coated with Matrigel (BD Biosciences, Franklin Lakes, NJ, USA). A 700-µL sample of the complete medium was also added to the bottom of the chamber. After incubation for 24 h, cotton swabs were used to carefully wipe off any non-invaded cells. The cells on the underside of the membrane were then fixed with 95% methanol and stained with crystal violet for 30 min. A Carl Zeiss microscope system (ZEISS, Jena, Germany) was used to randomly capture 3 images. Finally, the number of invaded or migrated cells were counted and averaged across 3 random visual fields.

StarBase (http://starbase.sysu.edu.cn/) predicted that TGF-β1 was 1 of the targets of miR-744-5p. A dual-luciferase reporter assay was then conducted to examine the interaction between miR-744-5p and TGF-β1. The mutant (Mut) or wild-type (Wt) TGF-β1 3'-untranslated region (3'-UTR) was inserted into the pSI-Check2 vector (HanBio). Next, miR-744-5p mimics or NC mimics were co-transfected with Wt or Mut TGF-β1 3'-UTR into Hep3B cells. A dual-luciferase reporter system (Promega, Madison, USA) was used to detect luciferase activity after 48 h.

The data are expressed as mean ± standard deviation (SD). The experimental data were statistically analyzed using GraphPad Prism 8.0 software (GraphPad, San Diego, USA). Two groups of normally distributed data were analyzed using the Student’s t-test. A 1-way analysis of variance followed by a Tukey-Kramer test was used to compare 3 or more differences between the treatment groups. Categorical data were tested using a chi-square test. Additionally, the Wilcoxon paired signed-rank test was used to determine the differences between paracancerous tissues and HCC tissues. A P<0.05 was considered statistically significant. 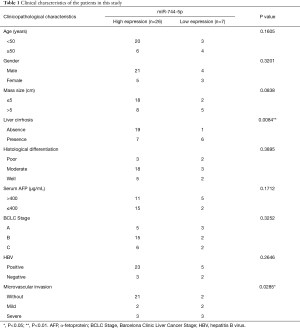 miR-744-5p inhibits the proliferation and metastasis of HCC cells 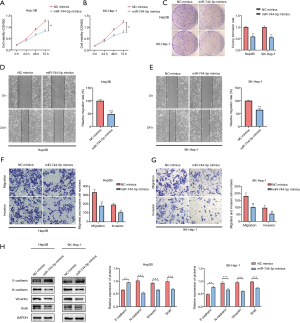 To further explore the potential molecular mechanisms by which miR-744-5p suppresses HCC progression, online public databases were searched to determine the downstream effects of miR-744-5p, and TGF-β1 was identified as the possible target of miR-744-5p (see Figure 3A). The relationship between miR-744-5p and TGF-β1 was examined using a dual-luciferase reporter gene assay. As Figure 3B shows, the luciferase activity was obviously inhibited following co-transfection with miR-744-5p mimics and h-TGF-β1-wt. Conversely, the luciferase activity remained unchanged when the cells were co-transfected with miR-744-5p mimics and h-TGF-β1-mut. Notably, the qRT-PCR results indicated that miR-744-5p might cause an obvious decrease in TGF-β1 expression in Hep3B and SK-Hep-1 cells, which also suggested that TGF-β1 might act as a possible target of miR-744-5p (see Figure 3C,D). Subsequently, western blotting was used to analyze the effects of miR-744-5p on the TGF-β1 signaling pathway. The expressions of TGF-β1, p-Smad2, and p-Smad3 were observed to decrease significantly after miR-744-5p mimics were transfected into Hep3B and SK-Hep-1 cells (see Figure 3E,F). 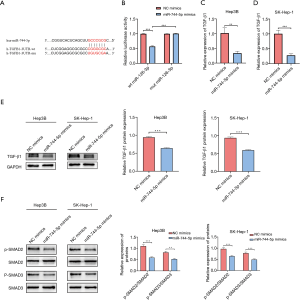 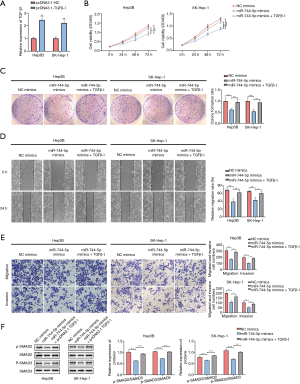 In recent decades, great advances have been made in the treatment of liver cancer. However, the prognosis of patients with liver cancer continues to be poor and unsatisfactory, which can be attributed to its high metastasis rate and frequent recurrence (20). Thus, exploring the details of HCC development and the pathogenesis of HCC is an effective means of improving the quality of life of patients. Recently, miRNAs have been the focus of research due to their critical role in tumor progression (21,22). Our results showed that miR-744-5p was more lowly expressed in HCC than para-carcinoma tissues. Additionally, the low expression of miR-744-5p was found to be closely correlated with microvascular invasion. miR-744-5p has also been found to suppress HCC cell proliferation and metastasis. Thus, we concluded that miR-744-5p plays a vital role in the development of liver cancer.

It is currently believed that high differentiation, low mortality, and a strong invasion and metastasis ability are the significant characteristics of tumor cells. These processes are often accompanied by the abnormal activation of many signaling pathways (23). Thus, finding the downstream target of miR-744-5p is essential if the occurrence and development of HCC is to be elucidated. In recent reports, miR-744-5p was identified as a diagnostic marker and therapeutic target for cancers due to its ability to target ADP ribosylation factor 1 (ARF1) (24), paired box 2 (PAX2) (25), heterogeneous nuclear ribonucleoprotein C (HNRNPC) (26), etc. However, in our study, it was predicted through starBase that TGF-β1 may be the downstream target of miR-744-5p. The luciferase reporter showed that miR-744-5p could target TGF-β1 directly.

In conclusion, our study showed that the expression of miR-744-5p was highly repressed in HCC tissues and cell lines. Further functional experiments showed that miR-744-5p exerts a tumor-suppressive role in HCC by directly targeting TGF-β1. However, the effects of the miR-744-5p/TGF-β1 pathway on HCC growth in vivo need to be further explored in future studies. Together, these findings provide new insights into the mechanisms involved in the occurrence and development of HCC. Further, these findings may have identified a prognostic marker that can be used as an important therapeutic target in the treatment of liver cancer.

Funding: This work was supported by the Venture and Innovation Support Program for Chongqing Overseas Returnees [CX2017105, CX2018146], and the Postgraduate Innovation Project of Chongqing Education Commission, Chongqing, China [CYS19184].

Reporting Checklist: The authors have completed the MDAR reporting checklist. Available at https://dx.doi.org/10.21037/jgo-21-319

Conflicts of Interest: All authors have completed the ICMJE uniform disclosure form (available at https://dx.doi.org/10.21037/jgo-21-319). The authors have no conflicts of interest to declare.

Ethical Statement: The authors are accountable for all aspects of the work in ensuring that questions related to the accuracy or integrity of any part of the work are appropriately investigated and resolved. The study was approved by the Medical Ethics Committee of The First Affiliated Hospital of Chongqing Medical University (No. 2021-156). All patients gave their informed consent. All procedures performed in this study involving human participants were in accordance with the Declaration of Helsinki (as revised in 2013).