Latinos currently represent the largest minority group in the United States (US). In 2016, nearly 60 million Americans identified as Hispanic or Latino (1). According to US Census Bureau projections, this ethnic group will double by the year 2060 (2). Texas is home to 19% of the nation’s Latino population, with the vast majority of Latino Texans being of Mexican origin (1).

Gastric adenocarcinoma is the predominant form of gastric cancer. Wang et al. conducted a large retrospective study using US Cancer Statistics (USCS) registry and Surveillance, Epidemiology, and End Results (SEER) Program data to examine national and state-level trends in gastric cancer incidence (3). This study demonstrated an overall reduction in the incidence of gastric cancer, from 7.64 per 100,000 in 1999 to 6.55 per 100,000 in 2013. However, they noted decreases in the rate of decline from 2007 onward and there was an increase in incidence rates amongst younger adults (those under age 50), particularly in females. California and Texas, states with large and growing Latino populations, showed the highest annual increases in the incidence of gastric cancer. However, it is important to note that the SEER data used in this study did not include patients from Texas.

To date, there is a paucity of published research on gastric cancer disparities in South Texas. Based on 2005–2009 Texas Cancer Registry and 2004–2008 SEER-17 data, the age-adjusted incidence rate (per 100,000) of gastric cancer is higher for South Texas compared to the rest of the state of Texas and the nation (8.3 vs. 6.7 vs. 7.7, respectively) (4).Additionally, gastric cancer occurrence is more than two times higher among South Texas Latinos than in non-Latino whites (11.4/100,000 vs. 4.7/100,000). Moreover, in South Texas, the incidence rate of gastric cancer is roughly twice as high among Latino females compared to non-Latino white females. Considering these observations in a Latino majority-minority region, it is critical to elucidate contributing factors for gastric cancer mortality in order to appropriately manage this high-risk group.

Results from other regional studies may not be applicable to South Texas considering differences in the composition of study populations and other lifestyle and environmental factors specific to the geographic area (5,6). Thus, research efforts to explore demographic, clinical, and histopathologic features as well as survival outcomes in gastric cancer among a distinctive population in South Texas is warranted. In contrast to other gastric cancer studies in the US, the Latino community in our investigation is more homogenous (i.e., of Mexican origin) and constitutes the majority of the patient population under examination (7). The objective of our study was to compare clinicopathological characteristics and survival outcomes of Latino and non-Latino white patients with gastric cancer who were seen at the National Cancer Institute (NCI)-designated Mays Cancer Center at the University of Texas (UT) Health San Antonio. We present the following article in accordance with the STROBE reporting checklist (available at https://dx.doi.org/10.21037/jgo-21-39).

The study was conducted in accordance with the Declaration of Helsinki (as revised in 2013). The study was deemed exempt by the Institutional Review Board at UT Health San Antonio and informed consent for this retrospective analysis was waived. We performed a retrospective chart review of all patients with gastric adenocarcinoma diagnosed and treated at Mays Cancer Center between 2000–2018. Data was entered directly into the Research Electronic Data Capture (REDCap) system, a web-based survey administration and data collection service developed at Vanderbilt University and hosted by the Department of Population Health Sciences (8).

The primary outcome measure was overall survival. Covariates included demographic data such as age at diagnosis, ethnicity, gender, and family history of cancer; clinical data including pathologic stage at diagnosis according to the American Joint Committee on Cancer (AJCC) (9), clinical stage at diagnosis, and treatment type (i.e. surgery, chemotherapy, radiation); and histopathological criteria including tumor grade, type—Lauren classification, lymph node involvement, anatomic location of primary tumor, lymphovascular invasion (LVI), Helicobacter pylori (H. pylori) status, HER2 status, and location of metastases. Continuously distributed outcomes were summarized with the sample size, mean, standard deviation, median, minimum and maximum and categorical outcomes were summarized with frequencies and percentages. Groups were contrasted on the mean with t-tests and on the median with Wilcoxon tests, and on proportions with Pearson’s Chi-square or Fisher’s exact tests as appropriate. Groups were contrasted on survival with log rank tests and survival distributions were described with Kaplan-Meier curves with 95% confidence bands. All statistical testing was two-sided with a significance level of 5% and 95% CIs for mean differences and for the median time to death. R was used throughout. 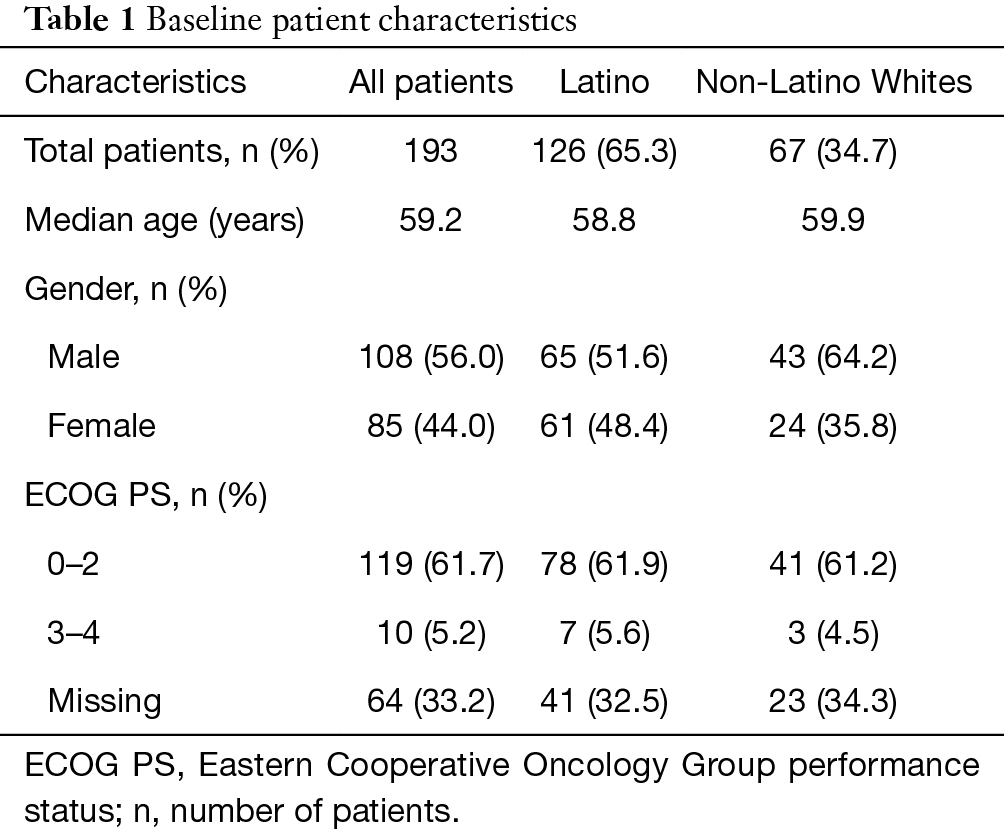 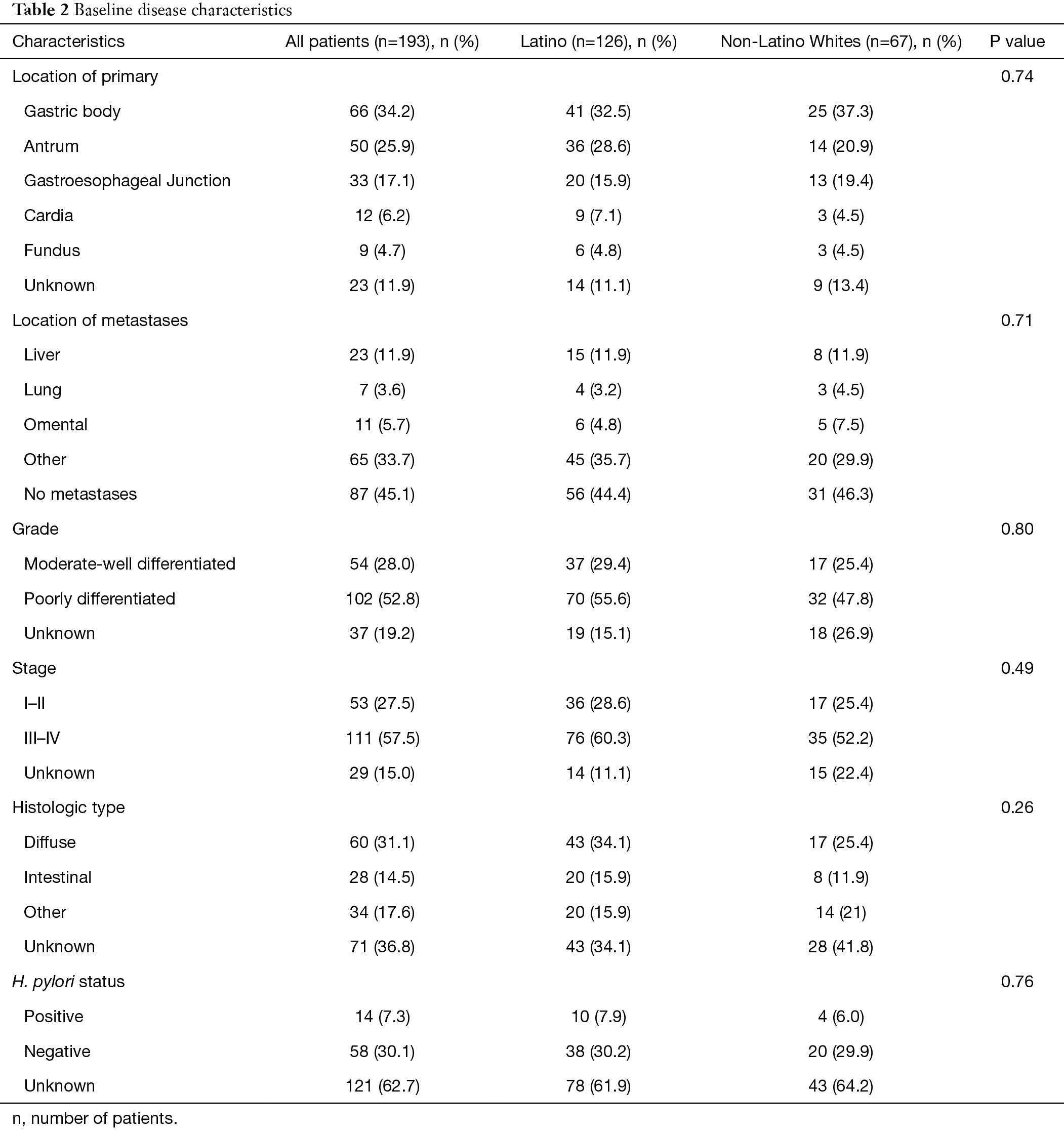 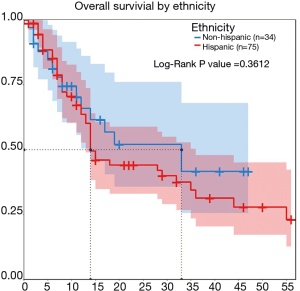 In this retrospective analysis of predominantly Latino patients with gastric cancer, we found that there were no statistically significant differences in clinicopathologic features at diagnosis. We also did not find significant differences in survival between the two ethnic groups. However, we did find that there is a trend towards decreased survival in Latino patients when compared to non-Latino white patients. Although we did not find a statistically significant difference, our trend does appear to be consistent with what some other studies have been able to demonstrate, with inferior outcomes in Hispanic patients with gastric cancer (10).

There are, however, other studies which have not been able to demonstrate a propensity for Latinos to have worse survival outcomes than non-Latino whites. This may be due, in part, to the diverse nature of the Latino population. Just over two-thirds of Latinos were born in the US (11), yet they are often grouped together with foreign-born Latinos in studies. It has been demonstrated that foreign-born Latinos have lower mortality rates for all cancers combined when compared with non-Latino whites (12). However, Latinos born in the US have cancer mortality rates approaching that of non-Latinos. This effect could be attributed to a higher propensity of healthy individuals to migrate to the US, or to an assimilation of cultural and dietary habits that may lead to higher risk disease in US-born patients. For these reasons, other studies have sought to divide the Latino population into those who were born in the US and those who were born in other countries. One study that made this distinction demonstrated inferior outcomes in Latino patients with gastric cancer overall (12). When these populations were stratified by country of birth, the findings became more complex, as the outcomes varied depending on the state of birth, with California-born patients having better outcomes than those that were Texas-born.

Even though overall cancer mortality is lower for foreign-born Latinos, gastric cancer is one of the few malignancies where Latino patients have worse mortality rates than non-Latinos overall (10). Other researchers have also hypothesized that disease biology is inherently different in Latino patients. For example, increased prevalence of Epstein-Barr virus (EBV) and H. pylori-related gastric cancer in this population might contribute to differing outcomes in these studies as well. The disease biology appears to have multiple complex factors contributing. EBV appears to be associated more frequently with more positive outcomes (13). EBV-associated gastric cancers have also been demonstrated to be more common in Hispanic patients in a small study (14), although more prospective evaluation is required to further clarify these data. Non-cardia diffuse-type gastric cancer is a subtype that is associated with treatment resistance and poorer outcomes (15). This type of gastric cancer is more common in those with lower socioeconomic status (16), and thus this is thought to also be a possible driver of disparate outcomes between non-Latinos and minority populations in the US.

Lower socioeconomic status has also been linked to poorer access to quality care, including lower rates of screening, delays in treatment after diagnosis, and low adherence to treatment plans (17). In addition to being over-represented in this category (18), the US Latino population is the least insured group in the country (19), which could also be linked with inferior outcomes. Counteracting this is the fact that there may be an earlier median age at diagnosis of gastric cancer in Latinos. In one study of 129,666 Latino patients diagnosed with gastric cancer between 2004 and 2014, the median age of diagnosis was 63 for Hispanics vs. 69 for non-Hispanics (20), making outcomes even more difficult to compare. Thus, there are many complex and sometimes conflicting factors that determine outcomes in this patient population.

Limitations of our study include that it is a retrospective analysis and it is a relatively small sample size. Additionally, our study population had a low rate of HER2 testing which is in part due to the inclusion of non-metastatic patients and that our study period included a time frame that begins prior to HER2 testing becoming standard of care. Our study also did not make the distinction between US and foreign-born Latinos, which could guide the direction of future studies. Given the limited published research available for this patient population, further prospective real-world studies are needed to evaluate access to care, quality of life, and treatment outcomes in order to improve the care of Hispanic patients with gastric cancer. We also need further investigation of epidemiologic, pathogenetic, and molecular differences to help identify variables that are predictive of treatment efficacy and survival outcomes.

All authors appreciate the efforts of Cesar Barron, MD, for his work in starting this project.

Funding: This work was supported by National Institutes of Health (grant number CA054174).

Reporting Checklist: The authors have completed the STROBE reporting checklist. Available at https://dx.doi.org/10.21037/jgo-21-39

Conflicts of Interest: All authors have completed the ICMJE uniform disclosure form (available at https://dx.doi.org/10.21037/jgo-21-39). Dr. SPA declares that she is on the Speakers Bureau for Bayer and Exelixis. She has received honoraria for lectures (Haymarket CME Education, Horizon CME Education). She has participated on Advisory Boards for AstraZeneca and QED Therapeutics. She has received support for travel from Faron. She is on the board for Support New India (unpaid). Dr. DLP declares that she has a relationship with the Department of Defense PRCRP, whose Career Development Award provided protected time to work on this manuscript. The other authors have no conflicts of interest to declare.

Ethical Statement: The authors are accountable for all aspects of the work in ensuring that questions related to the accuracy or integrity of any part of the work are appropriately investigated and resolved. The study was conducted in accordance with the Declaration of Helsinki (as revised in 2013). The study was deemed exempt by the Institutional Review Board at UT Health San Antonio and informed consent for this retrospective analysis was waived.