Life expectancies are rising globally, and the number of people who reach the age of 90 and beyond is increasing. However, with age, the incidence of cancer increases. For instance, age is an important risk factor for colorectal cancer (CRC), which is the third most common cancer in the world (1,2). Older people are increasingly being diagnosed with CRC, with a median age at diagnosis of about 70 years (3). Further, in patients aged ≥90 years, CRC accounts for more than one-fifth of new cancer diagnoses (4).

We present the following article in accordance with the STROBE reporting checklist (available at https://dx.doi.org/10.21037/jgo-21-324).

From January 2000 to December 2019, 151 consecutive patients with CRC aged ≥90 years from 3 individual hospitals were enrolled. Patients were excluded if they did not undergo surgery, had CRC concurrent with another type of cancer, or had incomplete clinical records.

Data on postoperative complications were collected, and the CCI was used to classify complications (8). Operative mortality was defined as any death related to surgery or surgical complications. Tumor specimens were examined by at least 2 pathologists. Tumors were staged according to the American Joint Committee on Cancer (8th edition) staging system.

Quantitative variables were expressed as means and standard deviations (SDs), and the Student’s t-test was used for comparisons. Categorical variables were expressed as frequencies and percentages, and comparisons were analyzed by the chi-square test, when one or more of the cell counts in a 2×2 table was less than 5, Fisher’s exact test was used. All comparisons were two-sided, and P<0.05 was considered to indicate statistical significance.

Linear regression was adopted to analyze the clinicopathological factors associated with the CCI. The Kaplan-Meier method was employed to calculate survival, and the survival curves were compared by the log-rank test. The Cox proportional-hazards model was applied to analyze survival-associated factors, and adjusted hazard ratios (HRs) and their 95% confidence intervals (CIs) were calculated. Variables with significant associations in univariate analysis, as defined by a P value <0.1, were included in multivariate analysis. SPSS 25.0 for Windows (IBM Corporation, Armonk, NY, USA) was used to perform the data analyses.

All procedures performed in this study involving human participants were in accordance with the Declaration of Helsinki (as revised in 2013). The study was approved by institutional ethics board of three hospitals (No.:2014-ke-161-1). Individual consent for this retrospective analysis was waived. 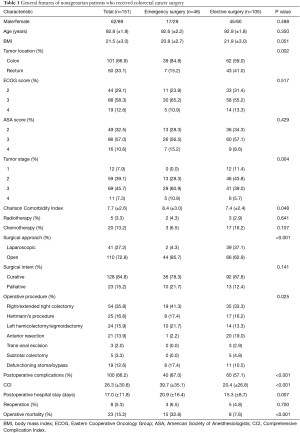 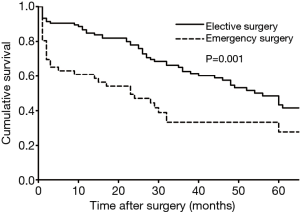 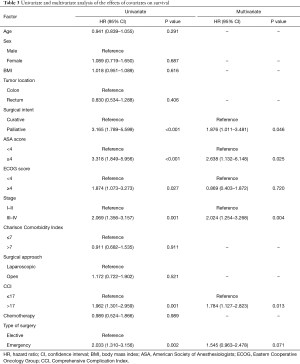 Data on the operative and oncologic outcomes of nonagenarians with CRC are scarce. Several retrospective studies with a small number of patients have reported that CRC surgery appeared to be safe for select patients aged ≥90 years, with acceptable morbidity and mortality, although the results were conflicting (10-15). Therefore, we conducted a multicenter study with a larger number of patients aged ≥90 years, and investigated their operative and oncologic outcomes.

In the present study, 66.2% patients experienced some type of complication; however, the median CCI was 17.3, and many of the complications were minor. Although the overall operative mortality rate was relatively high (15.2%), the mortality rate of elective surgery was lower, at 7.6%, which is similar to the results reported by other authors (8-10,13). The 5-year survival rate was 38.6%. Based on our results, we believe that surgical treatment can achieve acceptable short-term postoperative and long-term oncologic outcomes for patients with CRC aged ≥90 years; therefore, it should not be denied to this population.

We found that pneumonia or respiratory failure was the first cause of death. Chan et al. (11) also demonstrated that pneumonia with respiratory failure as the most common postoperative complication and the leading cause of mortality. Yap et al. (14) reported that by incorporating a physician’s input into the perioperative care, the 30-day mortality could be as low as 2.1%, patients in the study had a much lower (2%) incidence of pneumonia. These encouraging results demonstrated the importance of multidisciplinary collaborative care in the extreme elderly.

Emergency surgery was found to be an independent risk factor for complications among the patients in our study, and the rate of operative mortality was high (32.6%) in patients who underwent emergency resection. Therefore, it is reasonable to avoid urgent surgery and to offer therapeutic alternatives, such as self-expanding metallic stents for patients with colonic obstructions (16). Turning emergency surgery into elective surgery would aid in decreasing morbidity and mortality. For the inevitable emergency operation, multidisciplinary collaborative care was of great important. More attention should be paid to their breathing, because respiratory failure was the first cause of death.

In contrast, laparoscopic surgery was found to be associated with a low risk of postoperative complications in univariate analysis, although its statistical significance was lost in multivariate analysis. The benefits of laparoscopic colorectal resection have been widely studied in randomized controlled trials (17-20). However, all of these trials excluded elderly patients. Elderly patients are associated with higher rate of comorbidities and reduced functional reserve compared with younger patients, and increasing age itself is an important risk factor for postoperative morbidity and mortality. The usage of laparoscopic surgery in the very elderly patient remains controversial, the haemodynamic changes secondary to the increased intra-abdominal pressure caused by the pneumoperitoneum can be associated with perioperative complications which may be most marked in the nonagenarians. Because of safety considerations, most patients underwent open resection (72.8%). However, we found that laparoscopic surgery could be performed safely in nonagenarians and was associated with a low rate of complications. Laparoscopic surgery might be a better choice for colorectal cancer patients over 90 years old, especially for patients with palliative surgery. Further studies with larger sample sizes are needed to confirm these results.

ASA score was identified as an independent risk factor for both postoperative complications and survival. Surgeons should be extremely cautious in deciding whether to perform surgery on patients with an ASA score of ≥4, due to the association with a poor prognosis following surgery. Higher disease stages and palliative surgery were also associated with poor OS, indicating that the biological behavior of tumors is similar between nonagenarians and younger patients. However, for nonagenarian patients with an ASA score <4, curative surgery should be considered, especially for those in the early stages of cancer.

Although this is a multicenter study involving a larger number of patients than previous studies, it still has some limitations. Firstly, owing to the study’s retrospective nature, potential bias may exist. Secondly, the patients who received surgery were regarded as having a low risk of complications. Thirdly, data on patients who did not receive surgery were not available. Finally, we only reported the results of morbidity and mortality, as information about the patients’ quality of life and functional outcomes was not available.

CRC surgery should not be denied to nonagenarian patients. Surgical treatment can be performed with acceptable morbidity and mortality, and achieves long-term survival in a select group (e.g., elective surgery, ASA score <4, early-stage cancer) of these patients.

Reporting Checklist: The authors have completed the STROBE reporting checklist. Available at https://dx.doi.org/10.21037/jgo-21-324

Conflicts of Interest: All authors have completed the ICMJE uniform disclosure form (available at https://dx.doi.org/10.21037/jgo-21-324). The authors have no conflicts of interest to declare.

Ethical Statement: The authors are accountable for all aspects of the work in ensuring that questions related to the accuracy or integrity of any part of the work are appropriately investigated and resolved. All procedures performed in this study involving human participants were in accordance with the Declaration of Helsinki (as revised in 2013). The study was approved by institutional ethics board of three hospitals (No.:2014-ke-161-1). Individual consent for this retrospective analysis was waived.