Gastric cancer (GC) is the second leading of cause of cancer-related death in China (1) and places a large economic burden on society according to the latest epidemiologic data (2). Multimodality treatment approaches, consisting of surgery, adjuvant chemotherapy, immunity therapy, and targeted therapy, have improved patient outcomes in GC patients in recent decades, and radical surgery with a standard D2 lymphadenectomy remains the prioritized choice for stage II–III GC patients (3), when supplemented by chemotherapy and/or molecular targeted drugs (4). However, due to the heterogeneity of the treatment response to these therapies in most advanced GC patients, the prognosis remains unsatisfactory because of systemic relapses after surgery. Therefore, the discovery of a novel reliable biomarker to predict tumor recurrence or metastasis is imperative and will help risk stratification and improve prognostication in stage II–III GC patients.

The past decade has seen a growing consensus that cancer-related immune-inﬂammatory responses are critically involved in tumor progression by promoting tumor growth, invasion, angiogenesis, immune escape, chemoresistance, and metastasis, and are associated with the prognosis of the cancer patients (5-7). Recently, immune-inﬂammatory markers have been reported to be correlated with the prognosis of GC patients, including the circulating neutrophil to lymphocyte ratio (NLR) (8). Red blood cell distribution width (RDW) has obtained increasing attention in cancer research and several studies have reported that its elevation also correlates with a poor prognosis in GC (9). RDW is composed of RDW-variation coefficient (RDW-cv) and RDW-standard deviation (RDW-sd), and reflects the evenness of the volume and size of red blood cells (RBCs) (10). RDW is a component of routine blood examinations, and several studied reported that its elevation was associated with poor nutritional status and cancer-related chronic inflammation (11).

We present the following article in accordance with the REMARK reporting checklist (available at https://dx.doi.org/10.21037/jgo-21-271).

The electronic medical records of 151 patients diagnosed with stage II–III GC between March 2014 and September 2015 and hospitalized in The Affiliated Cancer Hospital of Zhengzhou University & Henan Cancer Hospital were retrospectively reviewed (Figure S1). All enrolled GC patients were treated with radical surgery and had complete follow-up. The inclusion criteria for selected patients were as follows: (I) all GC patients were confirmed by biopsy; (II) GC was defined according to pathological diagnosis and primary tumors were staged by CT; (III) all patients received radical gastrectomy and D2 lymphadenectomy; (IV) there was no evidence of distant metastasis; and (V), six to eight cycles of postoperative chemotherapy using 5-fluorouracil (5-FU)-based regimens (mostly oxaliplatin with either S-1) were performed after surgery. The exclusion criteria were any of the following: (I) patients with infection, rheumatoid disease or other inflammatory conditions, blood transfusion, or hematopoietic cytokine [i.e., epidermal growth factor (EGF), granulocyte colony-stimulating factor (G-CSF) within 1 month of study onset]; (II) evidence of distant metastasis at the first record of hospitalization; (III) remnant GC; (IV) patients who underwent non-radical surgery, or died due to non-cancer-related causes; (V) patients who underwent emergency surgery performed in case of digestive bleeding or perforation; and (VI), those who did not complete postoperative chemotherapy and follow up.

Variables including age, sex, tumor size, pathology, T stage, N stage, TNM stage, metastatic lymph node, vascular invasion, neurological invasion, serum carcinoembryonic antigen (CEA), carbohydrate antigen 19-9 (CA19-9), carbohydrate antigen 72-4 (CA72-4), preoperative neutrophil, lymphocyte, and pre-RDW-cv levels were collected from the first record of hospitalization for each patient. Tumor stages were classified according to the AJCC TNM staging system (8th edition) (12) and NLR was defined as the ratio of the neutrophil count over the lymphocyte count. All patients were divided into a high and low group according to the optimal cut-off points of RDW-cv and NLR by SPSS 24.0 software. The optimal cut-off value for preoperative- RDW-cv was defined as 14.1% and the cut-off value for pre-NLR was determined as 2.015. Patients with elevated RDW-cv (≥14.1%) and elevated pre-NLR (≥2.015) levels were allocated an R-NLR score of 2, an R-NLR of 1 (either a high RDW-cv or a high NLR), and R-NLR score of 0 (neither a high RDW-cv nor a high NLR). This study was approved by the Ethics Committee of The Affiliated Cancer Hospital of Zhengzhou University & Henan Cancer Hospital (No. KY2019177). All procedures performed in this study involving human participants were in accordance with the Declaration of Helsinki (as revised in 2013). Informed consent was obtained from participating patients.

Patients were followed at 3-month intervals for the first 2 years and at 6-month intervals for the next 3 years, and the median follow-up was 52.01 (range, 18–64) months after surgery. Patients who did not visit our hospital as scheduled were telephoned for follow-up to obtain treatment information and living status. Recurrence was determined by clinical and radiologic examination and/or histologic confirmation, including gastroscopy, serum CEA, CA19-9, CA72-4, CT, MRI, and/or PET-CT, and examinations were performed once metastasis was suspected. Overall survival (OS) was defined as the time from the diagnosis of GC to the date of the last follow-up or death, and disease-free survival (DFS) was defined as the time from surgery to the time of relapse.

The data were analyzed by SPSS 24.0 software (IBM SPSS Inc., Chicago, IL, USA). Continuous variables were expressed as mean ± standard deviation if normally distributed and categorical data were presented as numbers (percentage). Survival analysis was calculated by the Kaplan-Meier method and differences between the survival curves were compared with the log-rank test. Univariate and multivariate analyses were performed by Cox proportional hazards regression models, and risk factors of DFS and OS were calculated by hazard ratios (HRs). HRs with 95% confidence intervals (CIs) and two-sided P values were analyzed. A two-sided P<0.05 was considered statistically significant. 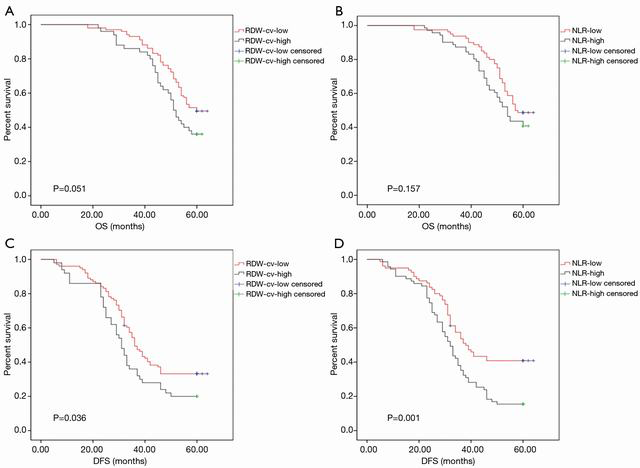 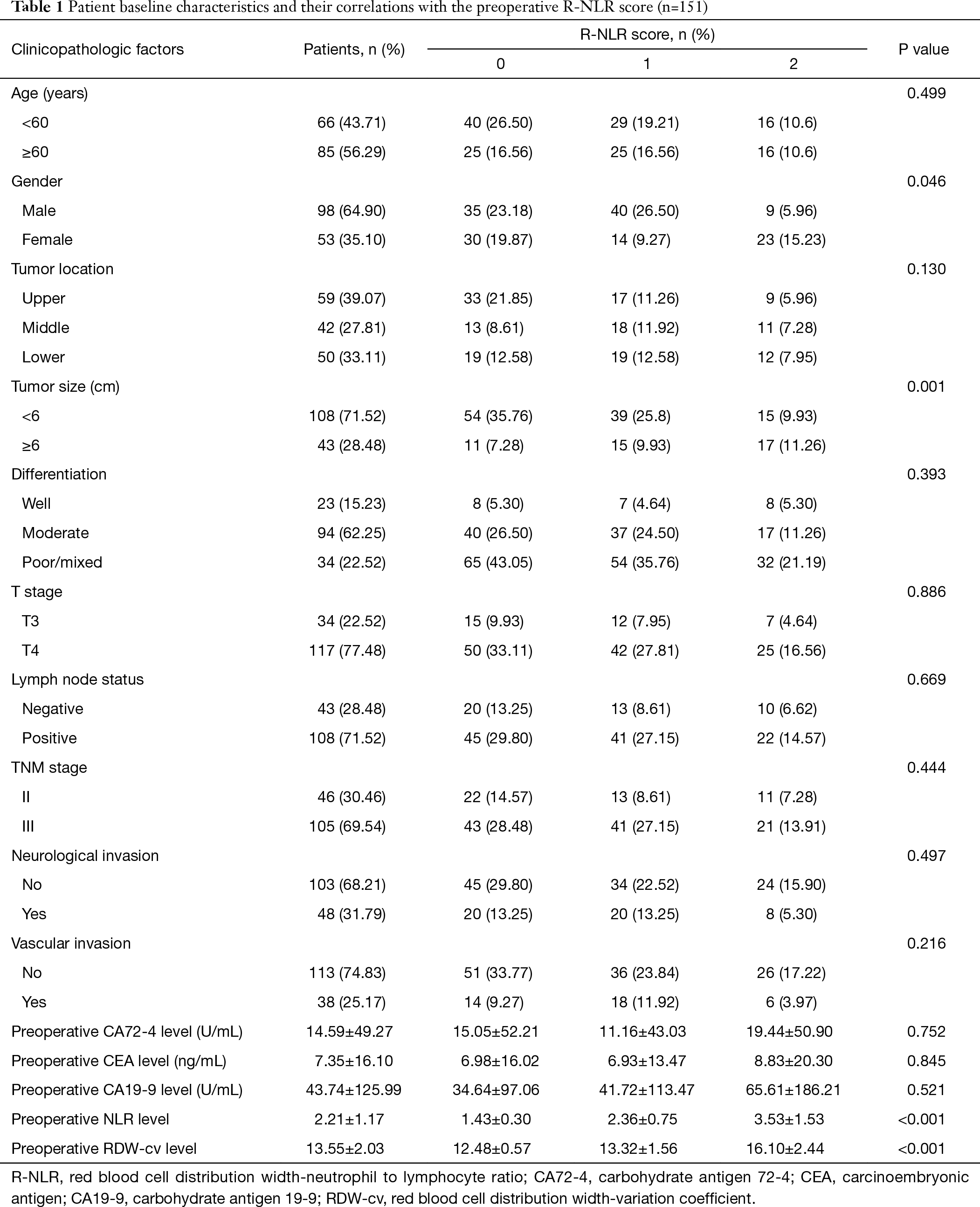 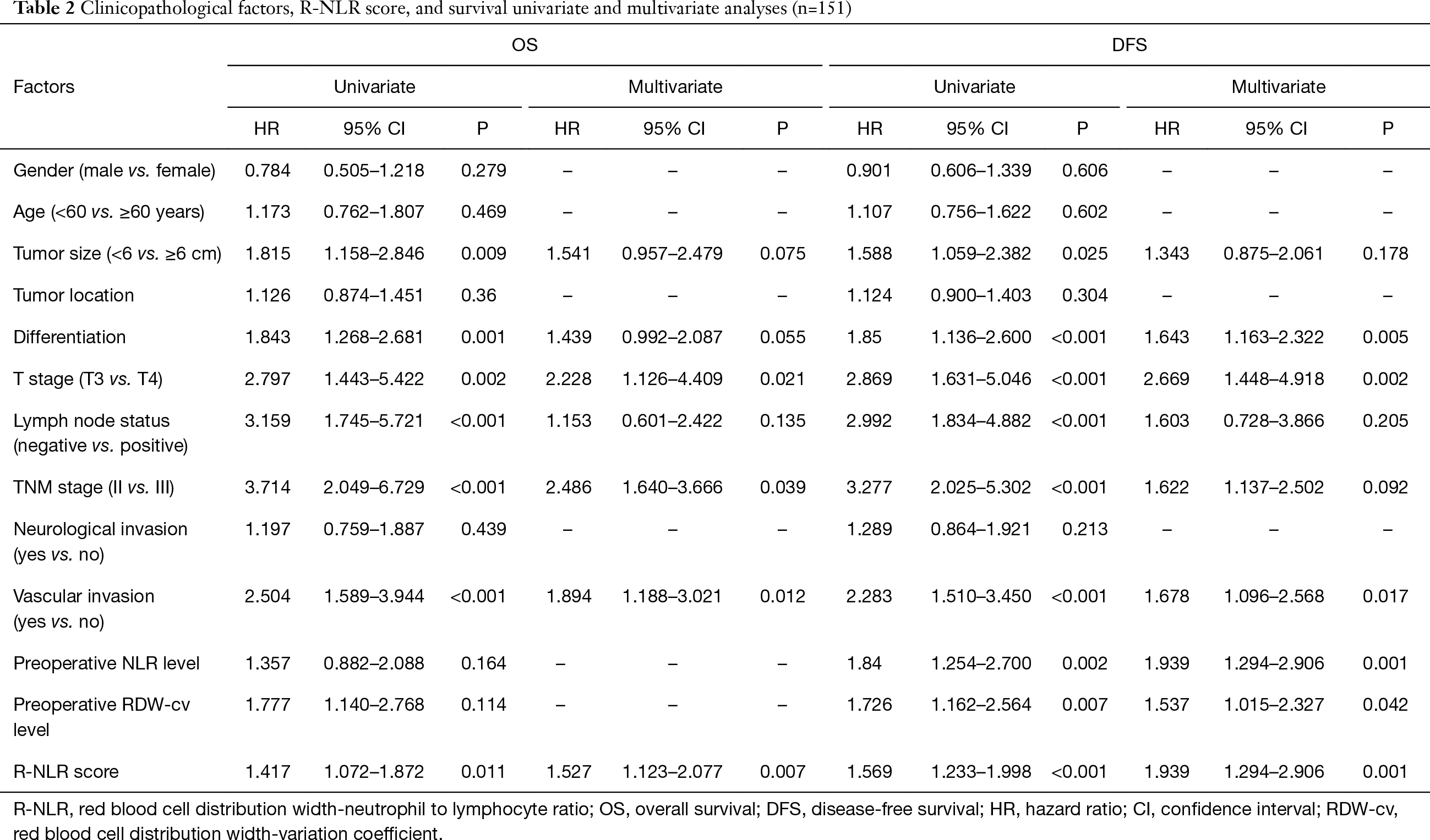 A number of previous studies have compared the prognostic impact of SII, CRP and other inflammation-based parameters in tumors such as lung and colon cancers (13-16). However, to our knowledge, there are no studies on the most appropriate parameters to predict long-term prognosis in GC. Some inflammatory and nutritional markers, including NLR and RDW, have been shown to indirectly reflect the progression of GC (13,14). Malnutrition is one of the most common symptoms of GC, and the use of preoperative anemia as a nutritional indicator is easy and convenient. The most common cause of anemia is iron deficiency caused by cancer progression, which leads to a serious decline in the physical condition of patients with GC (15). RDW is obtaining increasing attention in patients with GC, and its elevation has been reported to be correlated with a poor prognosis (16). Recent research also demonstrated that elevated RDW was associated with systemic inflammation induced by cancer cells and the cancer microenvironment (17-19). Increased cancer-related inflammation may inhibit the production of erythropoietin, reduce the release of iron from reticuloendothelial macrophages, and shorten the survival time of RBCs as cancer progresses (20). Interestingly, elevated RDW reflects these changes and is indirectly related to cancer-related inflammation, although the underlying mechanism requires further research.

Cancer-related inflammation appears to play a vital role in the development of several cancers including GC. Therefore, “avoiding immune destruction” has been accepted as an emerging hallmark and contributing characteristic of cancer treatment, including that of GC (21,22). Simultaneously, increasing evidence has shown that several inflammation indicators such as NLR are associated with tumor recurrence and a worse prognosis in several cancers (23-25). However, few reports have studied the relationship between NLR and the prognosis of patients with stage II–III GC. More importantly, there is now enough evidence to suggest that RDW and NLR are related to the prognosis of patients with stage II–III GC. However, there are no previous studies investigating the combined analysis of perioperative RDW and NLR (R-NLR score) for the prognostic estimation in stage II–III GC patients with D2 lymphadenectomy.

In the present study, we demonstrated that RDW-cv and NLR correlated with the prognosis of GC by AUC, despite RDW-cv being rarely reported as doing so. NLR is considered an important prognostic marker which reflects the tumor-related inflammatory state in several cancers including GC (26). However, our results suggest that elevated RDW-cv and NLR are negatively correlated with DFS but not OS in stage II–III GC patients who received radical surgery. Rapid economic growth in China has facilitated the development of secondary surgery and targeted drugs therapy applications following tumor recurrence and metastasis (27). However, the reliance on single tumor markers to assess the prognosis of cancers such as GC retards this progress. In this study, we demonstrated that the R-NLR score, which is based on RDW and NLR, could increase the predictive prognostic accuracy of stage II–III GC patients. We found that GC patients with elevated R-NLR have a worse 5-year OS and shorter DFS compared to those with low R-NLR. In addition, patients with elevated R-NLR were more likely to have a bigger tumor size and be female, while no association was found between elevated R-NLR and age, tumor location, differentiation, depth of infiltration, nodal involvement, TNM stage, vascular invasion, and neurological invasion. However, further research is required to verify these findings.

We also inducted a Cox model to identify the prognostic value of the preoperative R-NLR score, and after adjusting for other confounding factors, found that it remained an independent prognostic indicator for OS and DFS in stage II–III GC patients after radical surgery. Simultaneously, vascular invasion, depth of invasion, and TNM stage were also prognostic parameters.

The R-NLR score is a prognostic scoring system combining anemia status and the immune system, and our results demonstrated that the preoperative R-NLR score could as a powerful prognosticator compared to RDW or NLR alone for stage II–III GC patients following radical surgery and could be used to stratify patients at high risk of tumor recurrence to improve the survival estimation.

There are some limitations to this study. Firstly, its retrospective and single-center design, combined with the small number of patients may have led to bias in the results. Secondly, the collected prognostic indicators are limited, and thirdly, some patients received targeted drug therapy or second surgery after conventional chemotherapy, which may have skewed the results. In the future, prospective studies with larger sample sizes and full clinical staging are needed to validate our findings.

Reporting Checklist: The authors have completed the REMARK reporting checklist. Available at https://dx.doi.org/10.21037/jgo-21-271

Conflicts of Interest: All authors have completed the ICMJE uniform disclosure form (available at https://dx.doi.org/10.21037/jgo-21-271). The authors have no conflicts of interest to declare.

Ethical Statement: The authors are accountable for all aspects of the work in ensuring that questions related to the accuracy or integrity of any part of the work are appropriately investigated and resolved. This article was approved by the Ethics Committee of The Affiliated Cancer Hospital of Zhengzhou University & Henan Cancer Hospital (No. KY2019177) and informed consent was obtained from participating patients. All procedures performed in this study involving human participants were in accordance with the Declaration of Helsinki (as revised in 2013).