The prevalence of adenocarcinoma of the esophagogastric junction (AEG) has shown a rising trend in recent years (1,2). Multidisciplinary treatment, mainly surgery, is an effective strategy for early and middle-stage AEG and remains the only possible cure for this malignancy (3). Currently, the surgical approach to AEG remains controversial. A Japanese retrospective study suggested that the short-term and long-term outcomes of laparoscopic radical surgery and open surgery in the treatment of advanced gastric cancer between were not significantly different (4). A large number of multicenter clinical studies on laparoscopic surgery for advanced gastric cancer are underway. The oncologic safety of proximal gastrectomy for stage T2/3 AEG has recently been found to not significantly be different from that of total gastrectomy (5). However, total gastrectomy remains the most preferred surgical procedure for Siewert type II–III AEG (6). According to the Japanese Gastric Cancer Treatment Guidelines (fifth edition) (7), the recommended digestive tract reconstruction methods following proximal gastrectomy are esophagus-gastric remnant anastomosis, jejunal interposition, and double tract anastomosis (8). Compared with total gastrectomy, proximal gastrectomy can preserve some gastric functions and improve patients’ postoperative nutritional status. However, the incidence of reflux esophagitis reaches 25% one year after proximal gastrectomy plus esophagus–gastric remnant anastomosis, while the incidence of postoperative anastomotic stricture reaches to about 35% (8). A retrospective propensity score matching analysis in the Republic of Korea found that proximal gastrectomy with double-tract anastomosis lowered the incidences of these complications and might be associated with better clinical outcomes (9).

Our study retrospectively analyzed the clinical data of 113 patients who had undergone proximal gastrectomy with double-tract anastomosis in our center from October 2010 to October 2019 to assess the feasibility and safety of laparoscopically assisted proximal gastrectomy with double-tract anastomosis. We present the following article in accordance with the STROBE reporting checklist (available at http://dx.doi.org/10.21037/jgo-21-165).

The inclusion criteria were as follows: (I) with Siewert type II/III AGE preoperatively proven by gastroscopy and biopsy, which was expected to be feasible for proximal gastrectomy; (II) with a diagnosis of cT1-2N0M0 on abdominal contrast-enhanced computed tomography (CT); (III) aged 18–80 years; (IV) without a history of cancer or serious underlying disease, and with an Eastern Cooperative Oncology Group (ECOG) physical performance score of <2 and an American Society of Anesthesiologists (ASA) score of <3 points. The exclusion criteria included the following: (I) with early AEG that could be removed under endoscope; (II) with a history of malignancy; (III) with other serious comorbidities that would make surgery intolerable; (IV) previous neoadjuvant radiochemotherapy; (V) with a serious psychiatric disease; (VI) with incomplete clinical data.

The clinical outcomes of 113 consecutive Siewert type II/III AEG patients treated at our center from October 2010 to December 2019 were retrospectively analyzed. The decision to perform this procedure depended on the intraoperative findings. Laparoscopically assisted radical proximal gastrectomy with double-tract anastomosis has been carried out in our center since June 2014.

This was a retrospective case-control study and the requirement for informed consent was waived. This retrospective case-control study was approved by the ethics committee of Henan Tumor Hospital (No. 2019156) and was conducted in accordance with the Declaration of Helsinki (as revised in 2013). This study didn’t involve the biological tissues and specimens of patients, and informed immunity.

The scope of resection included lymph node dissection performed under open or laparoscopic conditions with reference to the Japanese Classification of Gastric Carcinoma second English Version (10), as described in detail by Ma et al. (11). 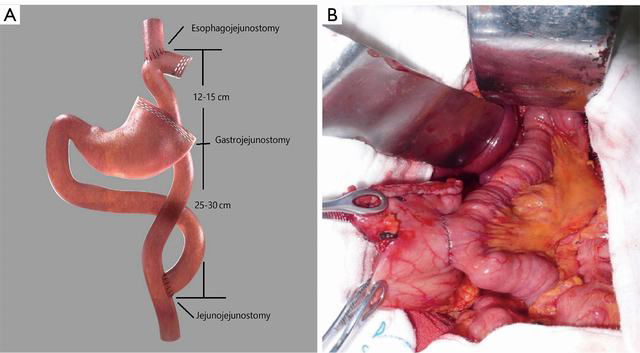 Thoraco-abdominopelvic CT was performed about 3 days after surgery, and water-soluble contrast was administered about 5 days after surgery determine the degree of healing of the reconstructed digestive tract. Patients were allowed to eat if there was no anastomotic leak or intestinal obstruction. The main outcome indicators included the occurrence of perioperative complications and the occurrence of postoperative reflux esophagitis. The postoperative complications were graded according to the Clavien-Dindo classification (12), and the postoperative gastroesophageal reflux symptoms were evaluated using the Visick scores (13). Based on the gastroscopic findings, postoperative reflux gastritis was graded according to the Los Angeles classification criteria (14).

Statistical analysis was performed by SPSS 22.0 software (IBM Corp.). The normally distributed measurement data are presented as and were compared using t-test, while the nonnormally distributed measurement data are presented using M (Q1, Q3) and were compared using Mann-Whitney U test. The generalized estimating equation was used for comparisons between groups at different time points. Count data are expressed as cases (%). The comparisons of nonranked count data were based on χ2 test, and the comparisons between ranked count data were performed using the Mann-Whitney U test. A P value <0.05 was considered significantly different.

Surgery and recovery during the perioperative period

Radical proximal gastrectomy with double-tract anastomosis was performed in 113 patients, among whom 61 received open proximal gastrectomy with double-tract anastomosis (OPG-DT group) and 52 of whom underwent laparoscopically assisted proximal gastrectomy with double-tract anastomosis (LAPG-DT group). The clinicopathological data of these patients are listed in Table 1. The operative time in the LAPG-DT group was longer than in the OPG-DT group and stabilized with the improvement of the surgical procedure. There was no significant difference between the 2 groups in the amount of intraoperative bleeding and the number of lymph nodes obtained postoperatively. After the surgery, the time to first flatus, the time to first eating, and postoperative hospital stay also showed no significant differences (Table 2). 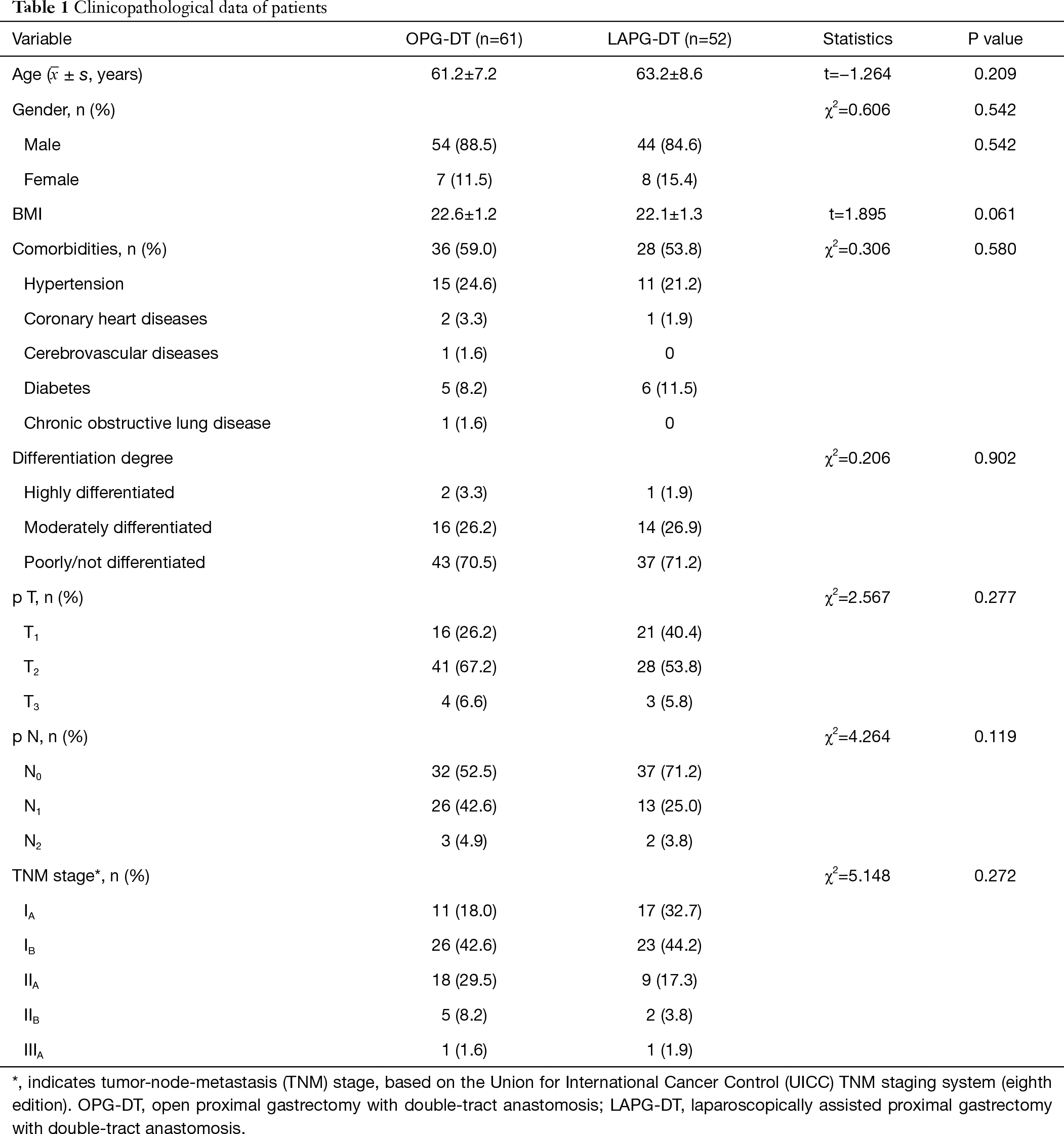 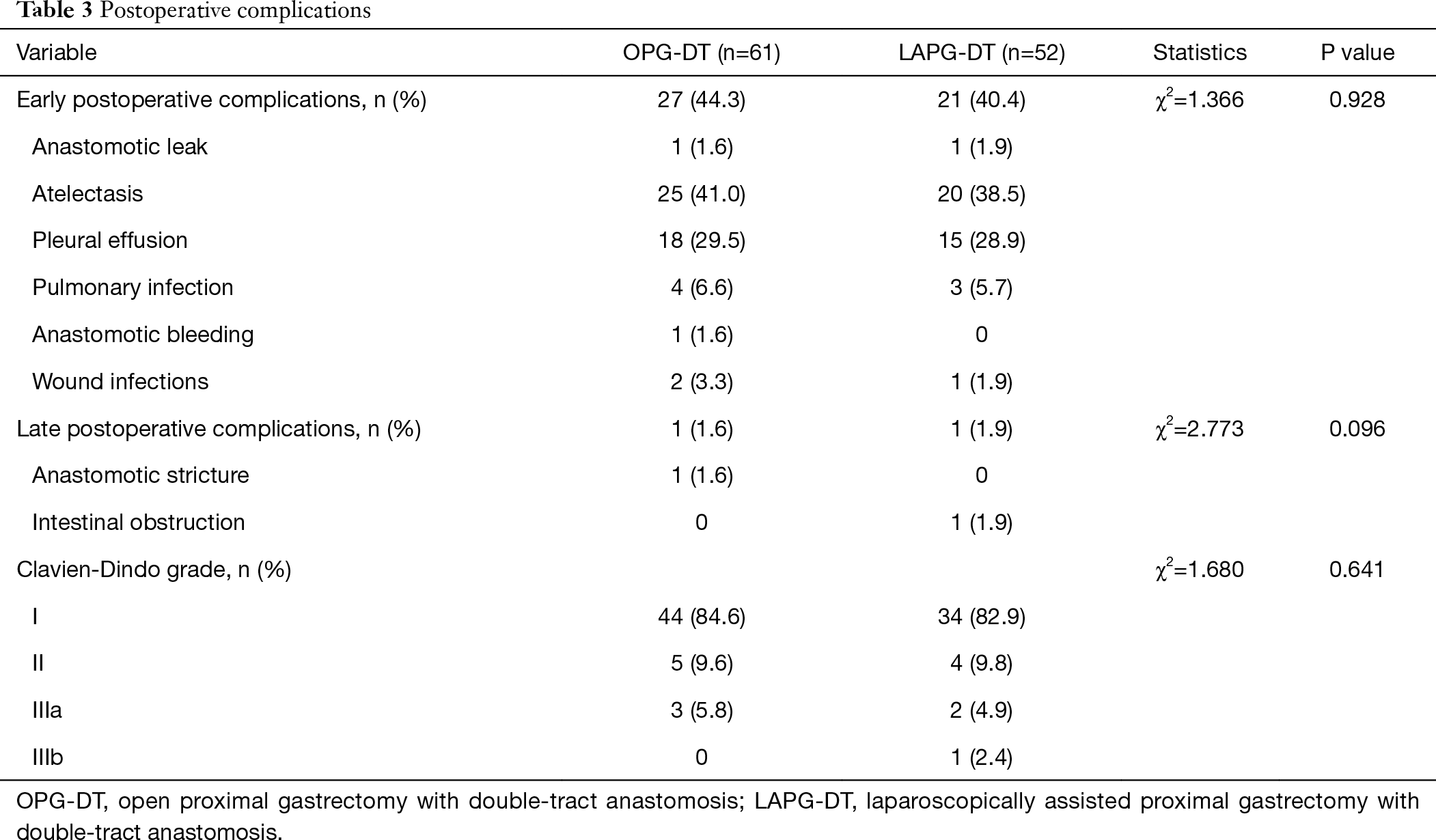 Changes in neutrophils and C-reactive protein after surgery 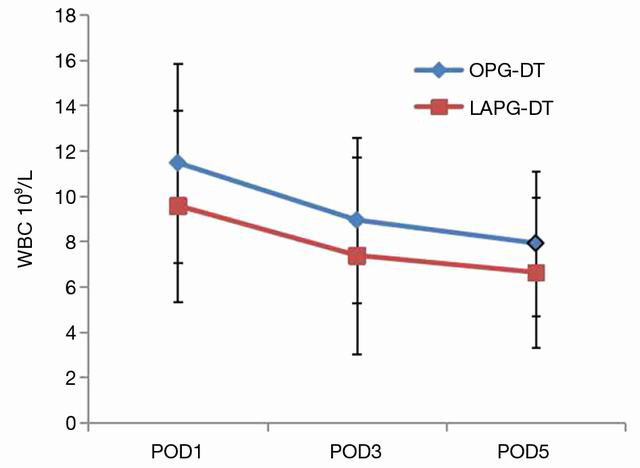 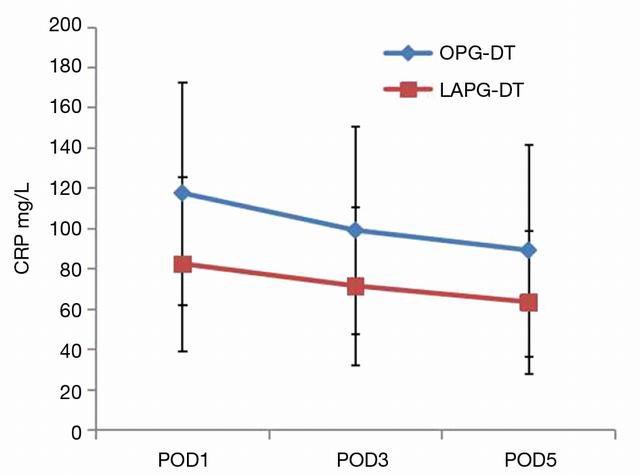 For reflux esophagitis, 56 patients (91.8%) in the OPG-DT group and 49 patients (94.2%) in the LAPG-DT group underwent endoscopic examination 1 year after surgery. Significant symptoms were seen in 1 patient in the former group but in no patients in the latter group. However, endoscopic grading showed that 4 patients in the OPG-DT group had manifestations of esophagitis (including 3 cases of grade A and 1 case of grade B); in the LAPG-DT group, 2 patients had the manifestations of reflux esophagitis, both of which were grade A (Table 4).

The greatest advantage of proximal gastrectomy with dual-tract anastomosis is in preventing the occurrence of reflux esophagitis. In our current study, the Visick score was used to assess postoperative reflux symptoms. Only 1 of the 113 patients developed grade II reflux symptoms, which were treated with intermittent oral omeprazole, suggesting that the procedure applied had a good antireflux effect. However, 6 patients presented with reflux esophagitis (grade B in 1 patient; i.e., with occasional reflux symptoms) during the endoscopic evaluation, indicating that the subjective symptoms do not always match perfectly with objective evidence, as described by Ronellenfitsch et al. (22). In the literature, the reported length of the jejunal interposition varies (23). We believe that keeping the length of jejunal interposition between 12 and 15 cm might be more helpful for reducing the occurrence of reflux and stasis (24). The operative time and difficulty of surgery are also of concern for many operators. In our current study, most patients had Siewert type II (without invasion of the dentate line) and type III tumors. The laparoscopic surgery initially lasted as long as 470 minutes, but the operative time was rapidly decreased after further optimization of the surgical processes.

Furthermore, the 2 groups showed no significant differences in postoperative complications (both short- and long-term complications) or complication grades. However, the incidences of postoperative pulmonary complications were relatively high among our patients. There are no uniform criteria for postoperative pulmonary complications, and their incidences may fluctuate from 2% to 40% (25). In our current study, 40.98% of patients in the open surgery group had varying degrees of pulmonary atelectasis, and 29.51% had varying degrees of pleural effusion; in contrast, these incidences were 38.46% and 28.85%, respectively, in the laparoscopic surgery group, which might be explained by the fact that the functional residual air volume usually reaches its valley value 1–2 days after the upper abdominal surgery and gradually recovers 5–7 days later (26). A CT scan of the thoraco-abdominopelvic cavity performed around the third postoperative day revealed a high incidence of pulmonary atelectasis. All the patients with pleural effusion also had varying degrees of pulmonary atelectasis. However, only a small percentage of these patients developed secondary pulmonary infections, which might be associated with age, smoking history, and chronic obstructive pulmonary disease (27). All anastomotic leaks in our current study occurred at the esophagojejunostomy site, with an incidence of 1.64% and 1.92%, respectively, in the OPG and LPG groups, and the outcomes was similar to the study conducted by Nomura et al. (28). Although there was no statistical difference in the use of additional analgesics, patients in the open surgery group used more additional analgesics than those in the laparoscopic surgery group. In both groups, routine blood tests, biochemistry, and C-reactive protein tests performed on postoperative days 1, 3, and 5 showed that the count of WBC and level of C-reactive protein were significantly lower in the LAPG-DT group than those in the OPG-DT group, suggesting that laparoscopic-assisted surgery reduced the inflammation and stress significantly compared with traditional open surgery. These findings offered a theoretical basis for the adoption of enhanced recovery after surgery (ERAS) following laparoscopic proximal gastrectomy with double-tract anastomosis.

In conclusion, although laparoscopic proximal gastrectomy with double tract anastomosis increases the operative time, it markedly decreases the bleeding, postoperative leukocyte count, and C-reactive protein level. Meanwhile, the number of surgically obtained lymph nodes, the postoperative short- and long-term complications, and the reduction of reflux esophagitis are not significantly different from those of open surgery. This procedure also features less bleeding and reduced inflammatory response. Thus, it is a safe and feasible surgical method for early AEGs.

Reporting Checklist: The authors have completed the STROBE reporting checklist. Available at http://dx.doi.org/10.21037/jgo-21-165

Ethical Statement: The authors are accountable for all aspects of the work in ensuring that questions related to the accuracy or integrity of any part of the work are appropriately investigated and resolved. This was a retrospective case-control study and the requirement for informed consent was waived. This retrospective case-control study was approved by the ethics committee of Henan Tumor Hospital (No. 2019156) and was conducted in accordance with the Declaration of Helsinki (as revised in 2013).