Gastric cancer remains the 6th most prevalent form of cancer and the 3rd leading cause of cancer-related death, with just under 800,000 new cases in 2017 alone (1,2). In order to prolong the survival of gastric cancer patients, it is vital that the disease is detected early and is rapidly treated via surgical intervention (3,4). Although open surgery can effectively remove the lesion, it can also result in significant trauma and a large amount of intraoperative blood loss, which is not conducive to postoperative recovery (5). At present, laparoscopic gastrectomy is a popular method. Clinical results indicate that laparoscopic gastrectomy has the advantages of small incision, limited tissue damage, and less intraoperative blood loss, and can clearly observe the complex structure around the stomach (6,7). For laparoscopic gastrectomy, the reconstruction of the digestive tract has been of widespread concern. In order to eliminate the tiny laparoscopic scars caused by laparoscopic assisted distal gastrectomy (LADG) with extracorporeal anastomosis, intracorporeal anastomosis is currently adopted, which leads to totally laparoscopic distal gastrectomy (TLDG). In 2002, Kanaya et al. designed a totally laparoscopic reconstruction of Billroth I, called the delta-shaped anastomosis (DA) (8). It has become a common method of digestive tract reconstruction following laparoscopic distal gastrectomy. Short-term outcomes of DA have been assessed previously, however, one study lacked long-term survival results(9) and another study indicated that there were no significant differences between the short-term efficacy and long-term survival of DA and Billroth I (10), with no further confirmation. In our study, a comparison of the short-term effects and long-term survival of gastric cancer patients using DA and Billroth I after laparoscopic distal gastrectomy was performed. We present the following article in accordance with the STROBE reporting checklist (available at http://dx.doi.org/10.21037/jgo-21-109).

Patients with gastric cancer undergoing laparoscopic distal gastrectomy from January 2013 to December 2017 were included in the study. The principle of surgery was primarily defined according to the treatment guidelines for gastric cancer in Japan (11,12). All the operations were performed with D2 lymphadenectomy, and a negative gastric margin after surgery was ensured to achieve adequate tumor resection (13,14). The principle of chemotherapy was based on the National Comprehensive Cancer Network (NCCN) guidelines (15,16). None of the patients received radiotherapy after surgery. Patient information was obtained from the Electronic Case System of the First Affiliated Hospital of Chongqing Medical University, and phone calls or outpatient visits were used for the follow-up of all patients through to December 31, 2018.

After the patient was anesthetized, a 1 cm arc incision was made in the lower edge of the navel to establish a CO2 artificial pneumoperitoneum. Surgery was performed with a five-hole method. DA in laparoscopic distal gastrectomy was performed with just a laparoscopic linear stapler8. In the Billroth I group, after fully mobilizing the stomach and lymph nodes, a small 5 cm incision was made 3 cm below the xiphoid process. The incision was protected with a wound protector. After delivery from the pylorus, a purse suture was placed in the duodenal balloon and connected to the mushroom head of the circular stapler. The stomach was divided by the linear stapler and combined with the circular stapler to the duodenal stump.

This retrospective study included 257 patients. Among them, there were 166 cases of Billroth I and 91 cases of DA. The study was approved by the First Affiliated Hospital of Chongqing Medical University Ethics Committee (No.2018-004). All procedures performed in this study involving human participants were in accordance with the Declaration of Helsinki (as revised in 2013). Individual consent for this retrospective analysis was waived.

SPSS v23.0 (SPSS Inc., IL, USA) was used for all statistical analyses. For quantitative variables, the normal distribution was verified. If the distribution was normal, continuous variables were compared using t-tests and were expressed as mean ± SD. If not, variables were tested by the Wilcoxon nonparametric test. For categorical data, a chi-square test or Fisher's exact test was utilized. The Kaplan-Meier approach and log rank tests were used for survival analyses. Cox proportional hazard regression model was used to analyze all data for univariate and multivariate analyses to verify independent survival prognostic factors. P<0.05 was the significance threshold. 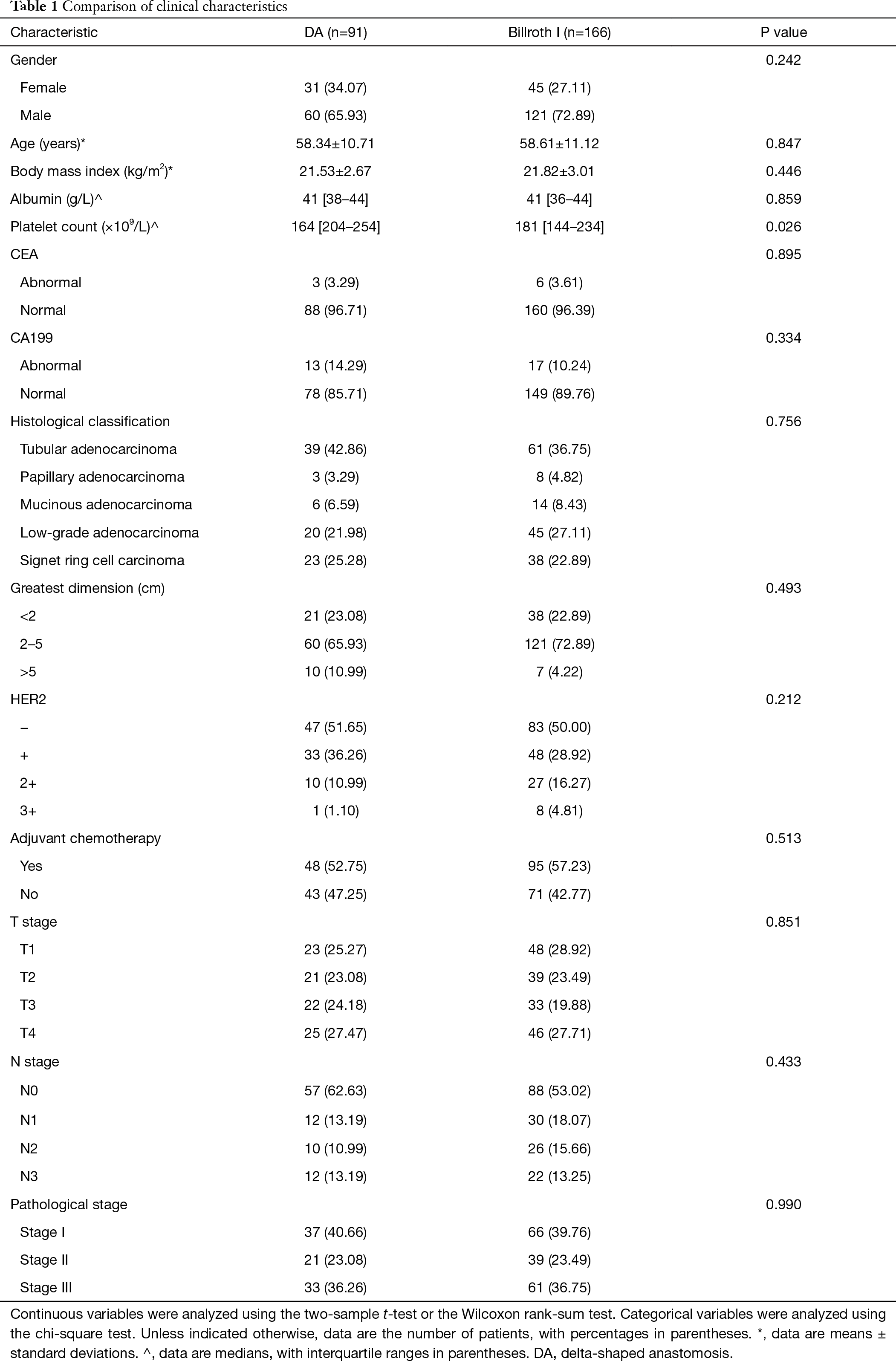 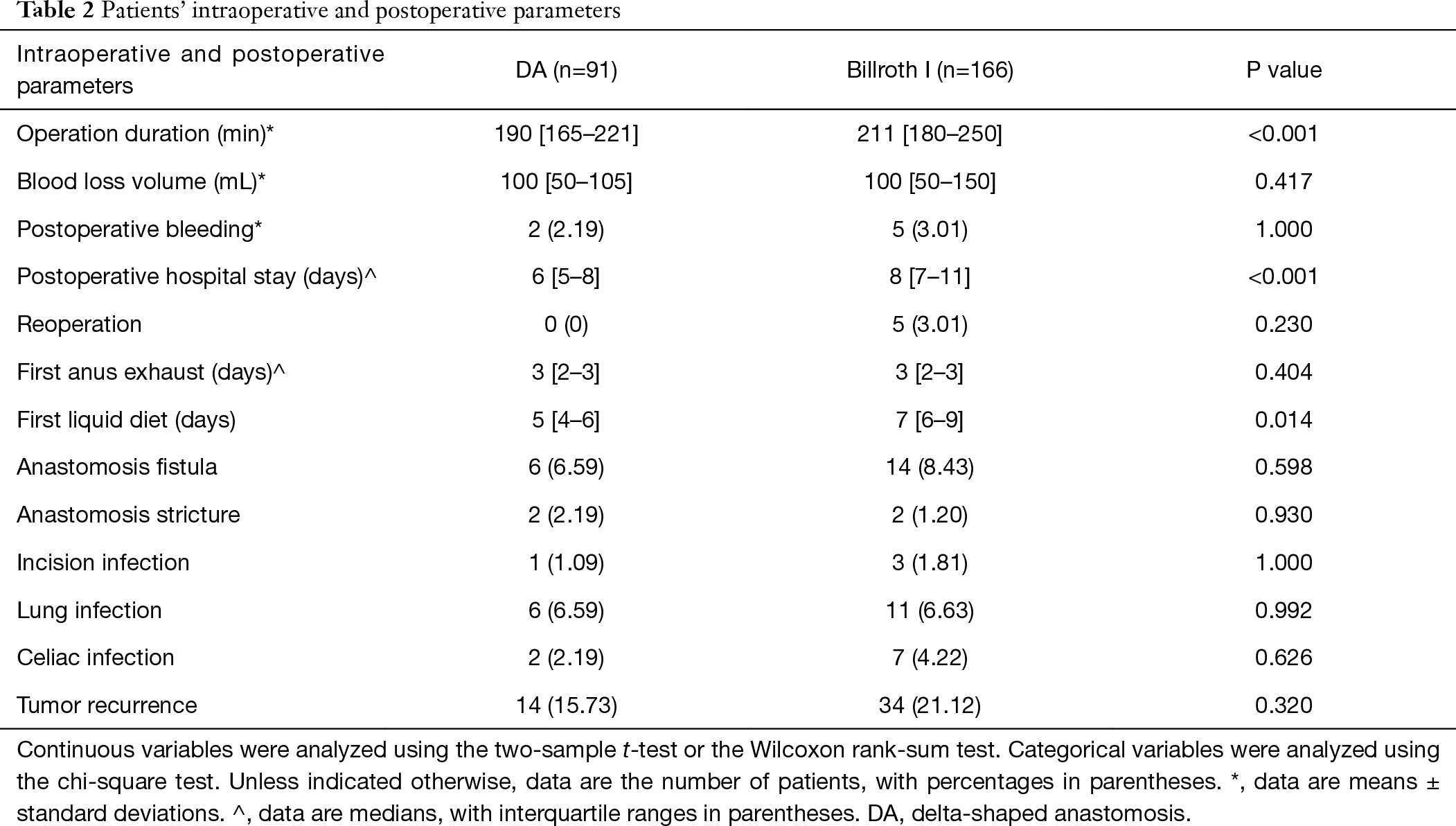 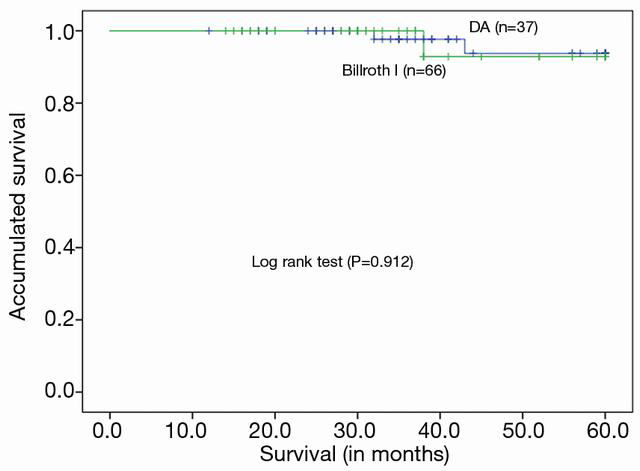 Figure 1 In the staged stratified subgroup analysis of stage I gastric cancer patients, the 5-year survival rates of the DA group and the Billroth I group were 93.77% and 94.44%, respectively (P=0.912). DA, delta-shaped anastomosis. 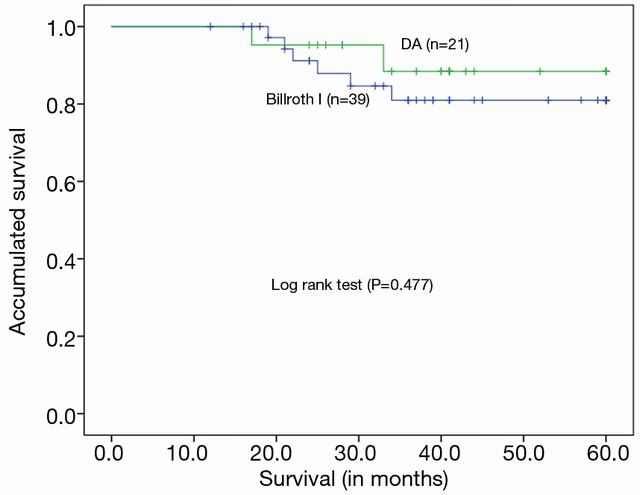 Figure 2 In the staged stratified subgroup analysis of stage II gastric cancer patients, the 5-year survival rates of the DA group and the Billroth I group were 81.07% and 73.22%, respectively (P=0.477). DA, delta-shaped anastomosis. 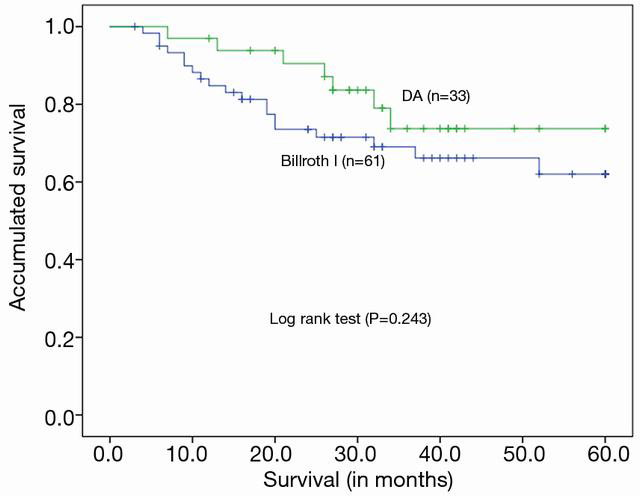 Figure 3 In the staged stratified subgroup analysis of stage III gastric cancer patients, the 5-year survival rates of the DA group and the Billroth I group were 63.97% and 55.38%, respectively (P=0.243). DA, delta-shaped anastomosis. 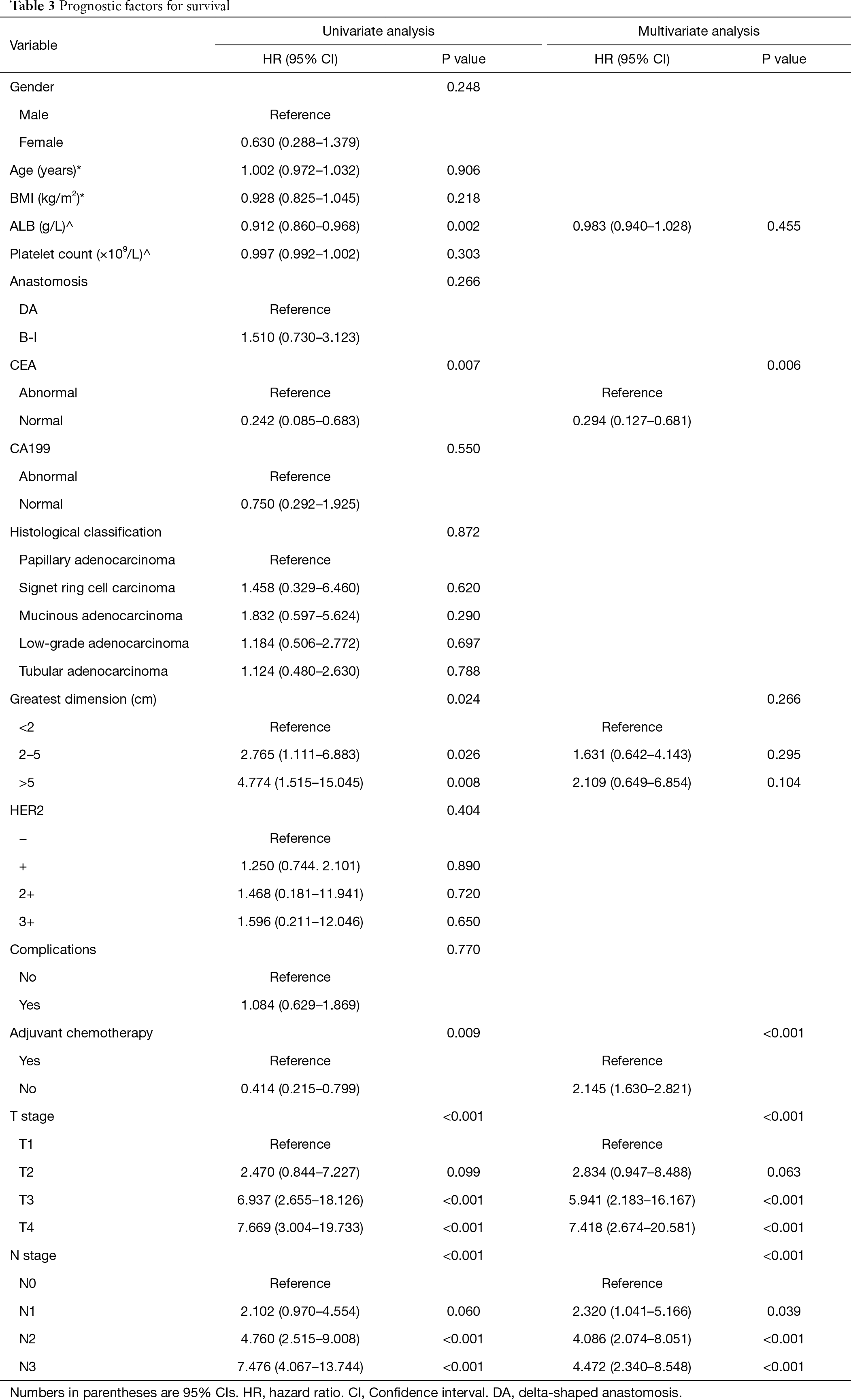 Common gastrointestinal reconstruction methods after laparoscopic distal gastrectomy include DA and Billroth I. The ideal method of anastomosis not only achieves the purpose of treating tumors and reconstructing the digestive tract, but also ensures good gastrointestinal function and reduces the rates of adverse outcomes or death following surgery. It is essential that significant attention be paid to the postoperative quality of life and prognosis of these patients (17,18). In clinical practice, Billroth I is commonly used by surgeons in the Asia Pacific region (19). Billroth I reconstruction was required to complete the anastomosis of the residual stomach and duodenum by laparoscopic assistance, while DA was totally performed under laparoscopy. TLDG has the advantages of small incision and minimal tissue damage (6,7). Therefore, the operation time of DA is shorter, the postoperative wound recovery is faster, and the postoperative hospitalization duration is shorter. The median operative time (190 minutes) was shorter in the DA group than in the Billroth I group (211 minutes) (P<0.001). The post-operative length of hospital stay in the DA group (6 days) was reduced compared with the Billroth I group (8 days) (P<0.001). The median time to first soft diet oral intake (5 days) in the DA group was earlier than in the Billroth I group (7 days) (P=0.014). These results are consistent with the results obtained in the previous literature (9).

The prognostic relevance of specific clinicopathological variables was assessed using univariate and multivariate analyses, which revealed that for both groups, CEA abnormality (P=0.006), chemotherapy (P<0.001), T stage (P<0.001), and N stage (P<0.001) were independent prognostic factors for survival (Table 3). CEA is one of the most commonly used serum tumor markers in gastric cancer. Previous studies have confirmed the value of CEA for predicting the prognosis of gastric cancer patients (20,21). Similarly, T stage and N stage grounding represent the extent of tumor progression and TNM staging, and postoperative chemotherapy affects postoperative tumor recurrence and progression. Therefore, these factors may affect survival outcomes.

There are multiple limitations to the present study. Firstly, this was a retrospective analysis and it is therefore susceptible to indication and selection biases. The reconstruction of laparoscopic distal gastrectomy for gastric cancer is determined by the surgeon. They usually choose Billroth I as the method for gastrointestinal reconstruction, resulting in differences in the total sample size of each group. Secondly, when we calculated postoperative survival, we did not detail the long-term complication rates of patients, and the patients’ long-term nutritional status, gastrointestinal function, and quality of life were not compared between treatment groups. However, multivariate and phased subgroup analyses were conducted, and these results were nonetheless convincing. Further prospective randomized controlled trials will be essential in order to better explore the optimal gastrointestinal reconstruction approach for LADG.

In summary, our results indicate that it is possible to safely conduct DA and Billroth I reconstruction following laparoscopic distal gastrectomy while achieving satisfactory complication rates. Among patients with diseases of the same pathological stage, no significant differences in 5-year survival were detected. DA offers clear advantages as a reconstruction approach, including the fact that it is a laparoscopic approach that results in minimal scarring while also reducing hospitalization duration and operative duration. Furthermore, DA patients exhibited more rapid postoperative dietary recovery than Billroth I patients.

The authors thank Dr. Zeng and Dr. Wu for reviewing an early draft of this article and providing valuable comments.

Reporting Checklist: The authors have completed the STROBE reporting checklist. Available at http://dx.doi.org/10.21037/jgo-21-109

Conflicts of Interest: All authors have completed the ICMJE uniform disclosure form (available at http://dx.doi.org/10.21037/jgo-21-109). The authors have no conflicts of interest to declare.

Ethical Statement: The authors are accountable for all aspects of the work in ensuring that questions related to the accuracy or integrity of any part of the work are appropriately investigated and resolved. The study was approved by the First Affiliated Hospital of Chongqing Medical University Ethics Committee (No. 2018-004). All procedures performed in this study involving human participants were in accordance with the Declaration of Helsinki (as revised in 2013). Individual consent for this retrospective analysis was waived.