Anastomotic leakage (AL) is a serious complication that can occur following rectal cancer surgery (1), and is a contributor to poor cancer-specific and overall survival (2). For patients with a high risk of AL, diverting ileostomy is recommended to reduce the risk of morbidity and mortality (3,4). However, the complications associated with ileostomy creation and closure, including dehydration, stoma stenosis, bleeding, hernia, and dermatitis cannot be ignored (5,6). These complications are responsible for the controversy surrounding the indication for ileostomy creation and the timing of ileostomy closure.

The postoperative incidence of fluid and serum electrolyte disturbance is high among patients who undergo ileostomy (7). Studies have reported dehydration to be a common reason for readmission of patients with ileostomy (8,9). Recent evidence suggests that the estimated glomerular filtration rate (eGFR) is decreased in patients with ileostomy (10-13). Furthermore, a decreased eGFR has been associated with an increased risk of cardiovascular co-morbidity and mortality (14,15). These observations highlight the potential link between compromised intestinal integrity with ileostomy and impairment of renal function.

In this study, we aimed to determine the effects of ileostomy on serum electrolyte levels and renal function in patients with rectal cancer after index surgery. Serum electrolyte levels and renal function were compared between patients with temporary ileostomy and those without ileostomy from baseline to 3 months after surgery for rectal cancer. We present the following article in accordance with the STROBE reporting checklist (available at http://dx.doi.org/10.21037/jgo-21-118).

Clinical data of patients with rectal cancer who underwent low anterior resection (LAR) with or without temporary ileostomy at the Sixth Affiliated Hospital of Sun Yat-sen University between January 2014 and December 2015 were retrospectively collected. Patients with a temporary ileostomy were assigned to the ileostomy group, and those without ileostomy were included as the control group. This study was conducted in accordance with the Declaration of Helsinki (as revised in 2013). Ethical approval for the study was obtained from the ethics committee of the Sixth Affiliated Hospital of Sun Yat-sen University. The requirement for informed consent was waived due to the study being observational and retrospective.

Data of the serum potassium (mmol/L), serum sodium (mmol/L), serum blood urea nitrogen (BUN, mmol/L), and serum creatinine (µmol/L) levels of the patients were collected at three timepoints which includes baseline (within 1 month before index surgery), 1 month and 3 months after index surgery. For the patients who underwent ileostomy closure, these indices were also collected at two timepoints which includes baseline (within 1 month before ileostomy closure) and post surgery (within 6 to 12 months after closure). Demographic factors (sex, age, body mass index (BMI), hypertension and diabetes), tumor characteristics (distance of the tumor to the anal margin and tumor stage) and treatment information (neoadjuvant chemoradiotherapy or chemotherapy, post surgery chemotherapy, length of hospital stay and surgical method) were obtained from all patients. Data on 30-day outcomes after index surgery (including death, AL occurrence, reoperation, and readmission) were also collected.

Demographic characteristics of the study participants

A total of 320 patients with rectal cancer who underwent LAR were included in this study. Of them, 156 patients received a temporary ileostomy (ileostomy group) and 164 patients did not receive an ileostomy (control group) at index surgery. The patients’ demographic characteristics and pathological outcomes are described in Table 1. There was no significant difference between the ileostomy and control groups with respect to sex, age, BMI, hypertension, diabetes, history of abdominal surgery, or length of hospital stay (P>0.05). Furthermore, the ileostomy group had increased rates of low tumors (<5.0 cm from the anal margin), neoadjuvant chemoradiotherapy, neoadjuvant chemotherapy, and stage I tumor compared to the control group (16.0% vs. 4.3%, P<0.001; 48.7% vs. 3.0%, P<0.001; 16.0% vs. 27.4%, P=0.020; and 35.3% vs. 9.8%, P<0.001; respectively). The perioperative outcomes are described in Table 2. The rates of laparoscopic surgery, mortality (within 30 days post surgery), AL (within 30 days post surgery), and readmission (within 30 days post surgery) were comparable between the groups; however, more reoperation events occurred in the ileostomy group than in the control group (5.8% vs. 0.6%, P=0.020). 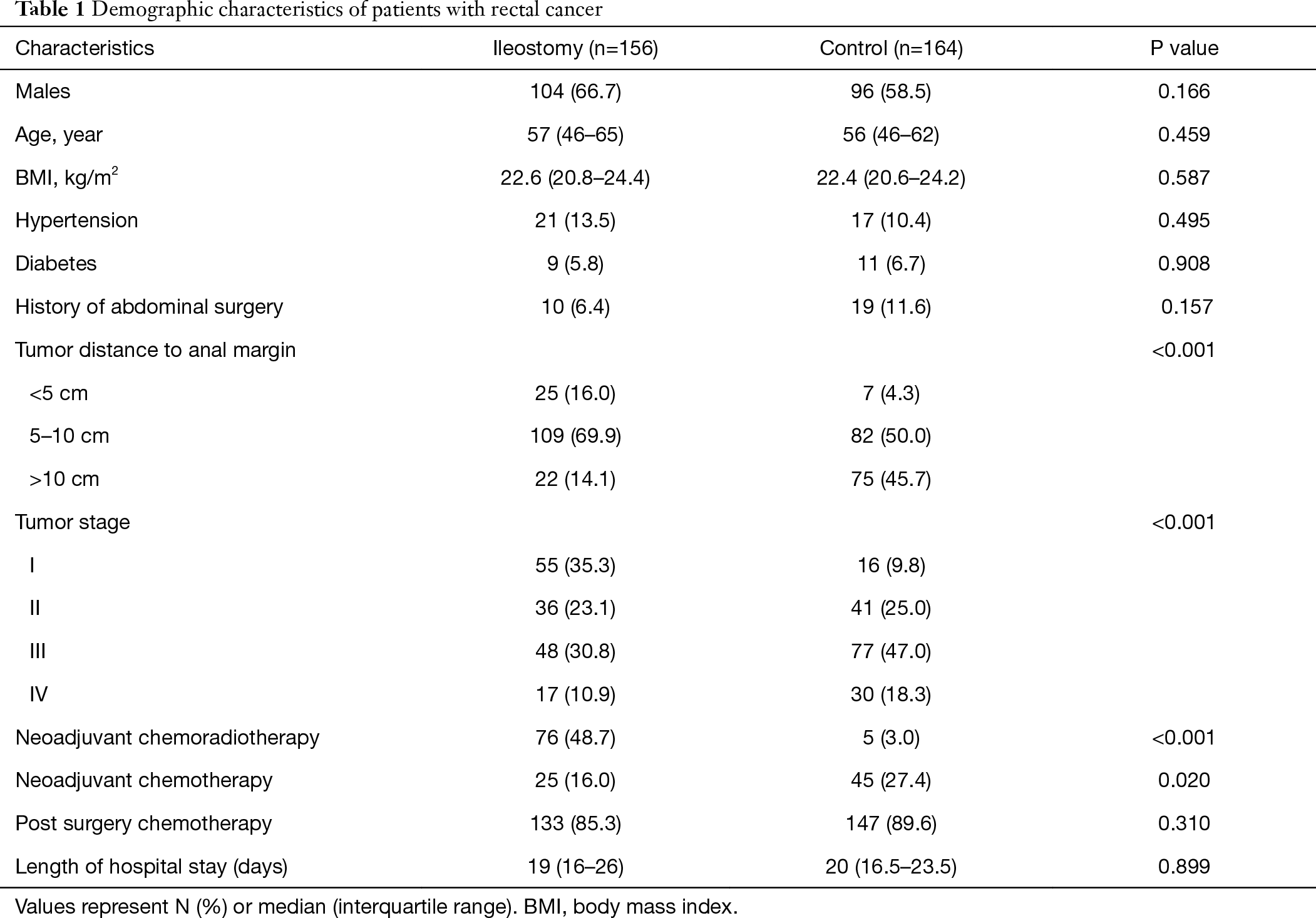 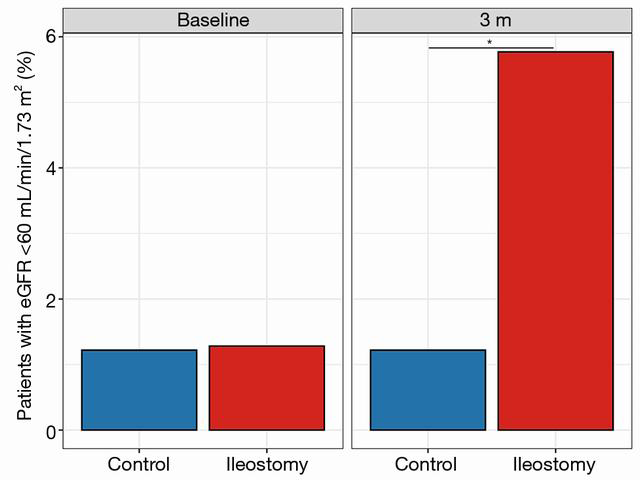 Figure 3 The proportion of patients with estimated glomerular filtration rate (eGFR) <60 mL/min/1.73 m2 is increased in the ileostomy group compared to the control group at 3 months after index surgery. Baseline: within 30 days before index surgery; 3 m (3 months): 61 to 90 days after index surgery. Statistical significance was determined by Chi-square test. *P<0.05.

Risk factors for a decreased eGFR

As the decrease in eGFR after surgery was more significant in the ileostomy group than in the control group, we explored the risk factors that might be associated with a decreased eGFR. For all patients, changes in the eGFR were calculated between baseline and 3 months after index surgery. A total of 14 risk factors including ileostomy, male sex, age, BMI, hypertension, diabetes, abdominal surgery history, tumor distance to the anal margin, tumor staging, neoadjuvant treatment, neoadjuvant chemoradiotherapy, neoadjuvant chemotherapy, and post surgery chemotherapy were included into a univariate analysis (Table 3). Apart from ileostomy, diabetes was identified as a risk factor for a decreased eGFR in patients at 3 months after index surgery (10.1% vs. 2.9%, P=0.016). Next, all risk factors were included for multivariate analysis. In line with the univariate analysis results, ileostomy and diabetes were identified as independent risk factors for a decreased eGFR (odds ratio: 2.3, 95% confidence interval: 1.3–4.3, P=0.005; odds ratio: 4.1, 95% confidence interval: 1.3–15.9, P=0.022, respectively). 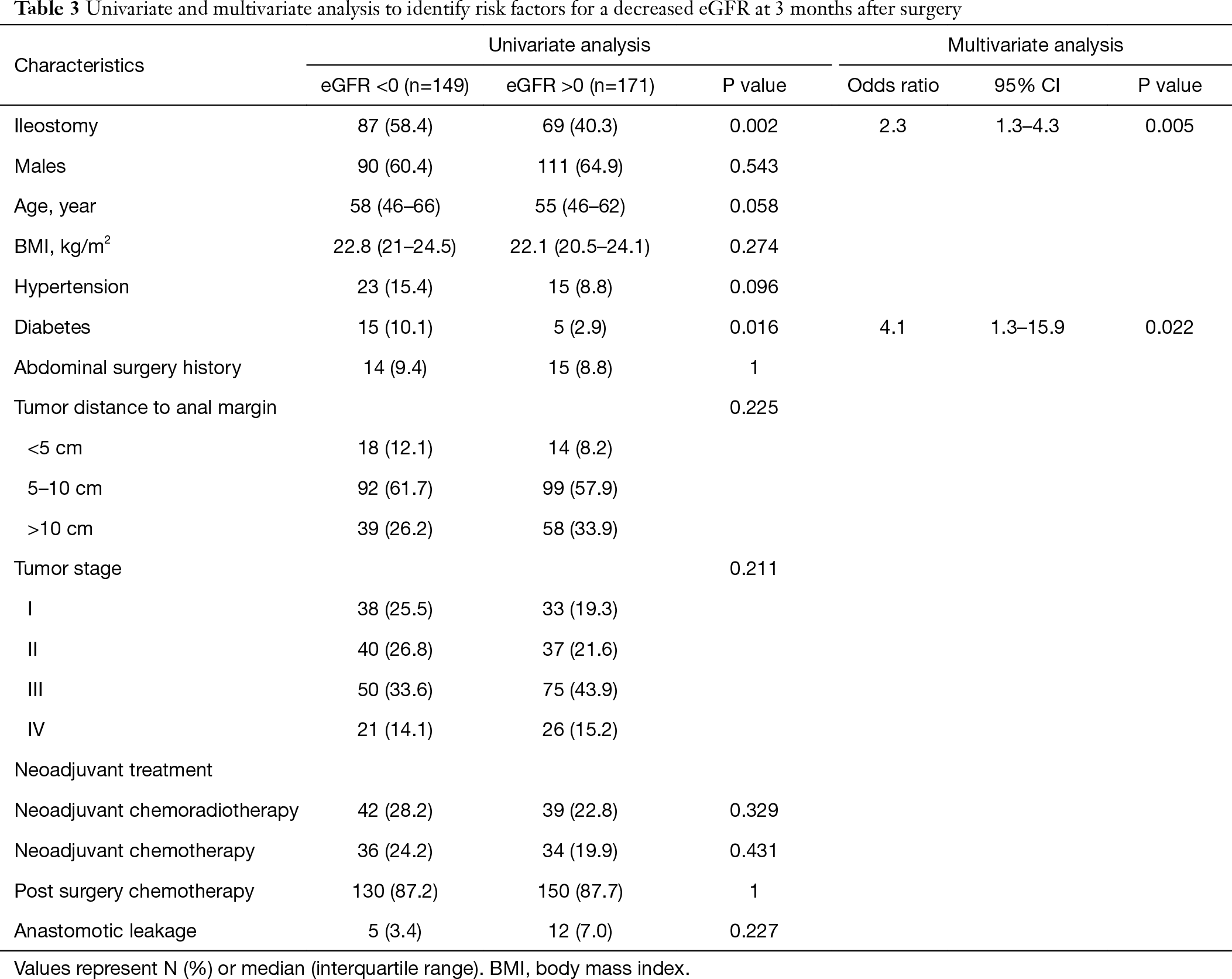 Although several previous studies have reported a longer duration of ileostomy to be associated with an elevated risk of stoma-related complications (28,29), the changes in renal function with different stoma durations are not well known. A study by Yaegashi et al. reported that the eGFR was decreased in patients at 1 month after ileostomy creation (11). However, multiple factors might affecting the eGFR within the perioperative period, including surgical stress and dietary disorders. In our cohort, the eGFR only differed between the ileostomy group and the control group at 3 months after index surgery. Furthermore, we failed to observe a significant difference in the eGFR among patients with different stoma durations before closure. These results suggest that the onset of eGFR reduction occur by 3 months after ileostomy creation but no further changes of eGFR occur in patients with a longer ileostomy duration. This evidence suggests that early ileostomy closure before 3 months after index surgery might be an effective means of avoiding significant impairment of the eGFR.

This study has several limitations. First, this retrospective study had a modest sample size and the included data were retrospectively collected from patient medical records. Consequently, stoma output and dehydration could not be assessed in this study, especially after discharge from the hospital. Second, the eGFR was estimated from serum creatinine, which can be affected by physiological and dietary disturbances during the perioperative period; such disturbances might have introduced bias to our analysis of changes in the eGFR and serum creatinine levels. Third, drugs usage is commonly reported associated with renal function variations (32,33). We found higher ratio of patients received neoadjuvant chemoradiotherapy and neoadjuvant chemotherapy in the ileostomy group before LAR (Table 1), this might associate with decreased renal function in the ileostomy group compared with the control group. However, we did not observe significantly difference of renal function between the ileostomy group and control group at baseline. Further prospective studies with larger sample size with detailed drugs usage, stoma output and dietary record might help understand the effects these confounding factors.

Reporting Checklist: The authors have completed the STROBE reporting checklist. Available at http://dx.doi.org/10.21037/jgo-21-118

Conflicts of Interest: All authors have completed the ICMJE uniform disclosure form (available at http://dx.doi.org/10.21037/jgo-21-118). The authors have no conflicts of interest to declare.

Ethical Statement: The authors are accountable for all aspects of the work in ensuring that questions related to the accuracy or integrity of any part of the work are appropriately investigated and resolved. The study was reviewed and approved for publication by our institutional reviewer. This study was conducted in accordance with the Declaration of Helsinki (as revised in 2013). Ethical approval for the study was obtained from the ethics committee of the Sixth Affiliated Hospital of Sun Yat-sen University. No written informed consent was required for this analysis due to the retrospective nature of the data.