Intrahepatic cholangiocarcinoma (ICC) is the second most common liver cancer after hepatocellular carcinoma (HCC) with an increasing incidence worldwide (1). Partial hepatectomy (PH) is currently the only well-established treatment aiming at cure for ICC. However, the long-term prognosis after PH for ICC is dismal due to high incidence of tumor recurrence (2). Efforts to investigate effective postoperative adjuvant therapy may improve the long-term survival outcomes in patients with ICC.

Microvascular invasion (MVI) is a well-defined risk factor associated with tumor recurrence and poor OS in patients with ICC after PH (15-18). It is currently unclear whether adjuvant TACE improves the long-term prognosis in patients with ICC involving MVI (ICC-MVI) after PH is unclear. Our previous study revealed that adjuvant TACE following PH might be suitable for ICC patients with high ICC nomogram scores (≥77) (19). In this study, we used a database from a multicentric cohort of patients with ICC-MVI to evaluate the causal effects of adjuvant TACE on ICC-MVI after PH, using propensity score analyses to emulate a randomized controlled trial. We present the following article in accordance with the STROBE reporting checklist (Available at http://dx.doi.org/10.21037/jgo-20-443).

All patients with ICC-MVI undergoing curative-intent PH at the Eastern Hepatobiliary Surgery Hospital (Second Military Medical University, Shanghai), the Zhongda Hospital (Southeast University, Nanjing), and the Qin Huai Medical District of Eastern Theater General Hospital (Bayi Hospital, Nanjing) between December 2002 and November 2015 were considered to be enrolled in this retrospectively study. All of the enrolled patients were confirmed by histopathological findings. The inclusion criteria included patients with: (I) curative-intent PH for ICC; and (II) age older than 18 years. The exclusion criteria included patients with: (I) macrovascular invasion; (II) a history of other malignancies; (III) R1 and R2 resections; (IV) preoperative anticancer or neoadjuvant therapy; (V) lipiodol concentration foci detected by TACE; (VI) other postoperative adjuvant therapy (adjuvant chemotherapy, etc.); (VII) death within 30 days of operation and (VIII) loss to follow-up. The study ﬂow chart is shown in Figure 1. 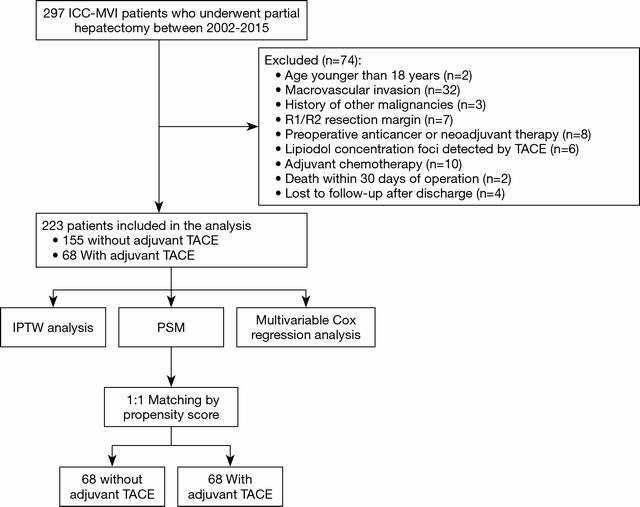 Figure 1 Flow chart of the study.

Adjuvant TACE was carried out within 2 months after PH using the Seldinger technique. Briefly, microcatheter was inserted into an appropriate hepatic artery through femoral artery, and iodized oil emulsion (3–5 mL), 5-fluorouracil (500 mg), hydroxycamptothecin (10 mg), and epirubicin (20 mg) were injected into the liver through the catheter.

Patients were followed-up once every 2 months in the first 2 years after surgery and then once every 3–6 months thereafter. In each follow-up visit, serum tumor markers that included carbohydrate antigen (CA) 19-9, carcinoembryonic antigen (CEA), and alpha-fetal protein (AFP); liver function; chest radiography; and abdominal ultrasound were routinely conducted. CT/MRI was performed every 6 months or earlier if clinically indicated. Once tumor recurrence was diagnosed, patients were treated with repeat resection, percutaneous ablation, TACE, radiotherapy, or supportive care.

Continuous variables expressed as median (range) or means ± standard deviations (SDs) were compared using Mann-Whitney or t test between the adjuvant TACE and non-TACE groups, whereas categorical variables were reported as numbers and percentages and compared using chi-square or Fisher test. The OS and recurrence rates were estimated using Kaplan-Meier and compared by log-rank test. Univariate and multivariate analyses of the entire data were performed using the Cox proportional hazards regression model for recurrence and OS. Propensity scores were calculated by a multivariable logistic regression model, with adjuvant TACE status regressed on age (continuous variable), sex (female/male), HBsAg (negative/positive), cirrhosis (no/yes), CEA level (<5/≥5 µg/L), CA 19-9 level (<39/≥39 U/mL), tumor size (≤5/>5 cm), tumor number (single/multiple), differentiation (well-moderate/poor), lymph node status (N0/Nx/N1), visceral peritoneum invasion (no/yes), and direct invasion of adjacent organs (no/yes). Nearest neighbor with a caliper of default width of the SD of the logit of the propensity score was used (23). Standardized mean difference (SMD) was used to compare balance among covariates, with a value of ≤0.10 indicating good balance (24). Inverse probability of treatment weighting (IPTW) based on the propensity score was used to construct a weighted cohort of patients who had similar baseline characteristics. To reduce the variability in the IPTW models, we used stabilized weights (25). A 1:1 propensity-score matched (PSM) analysis was also conducted. To assess the robustness of our results, a robust sandwich estimator was also used. In the subgroup analysis, Cox regression model was utilized to calculate the hazard ratios (HR) and 95% CI.

The study was conducted in accordance with the Declaration of Helsinki (as revised in 2013). The study was approved by the institutional ethics committees of each of the involved hospitals (NO. EHBHKY2020-K-027, 2020ZDSYLL010-P01, and 81YY-KYLL-19-05). Informed consent was routinely obtained before surgery.

Baseline characteristics before and after IPTW 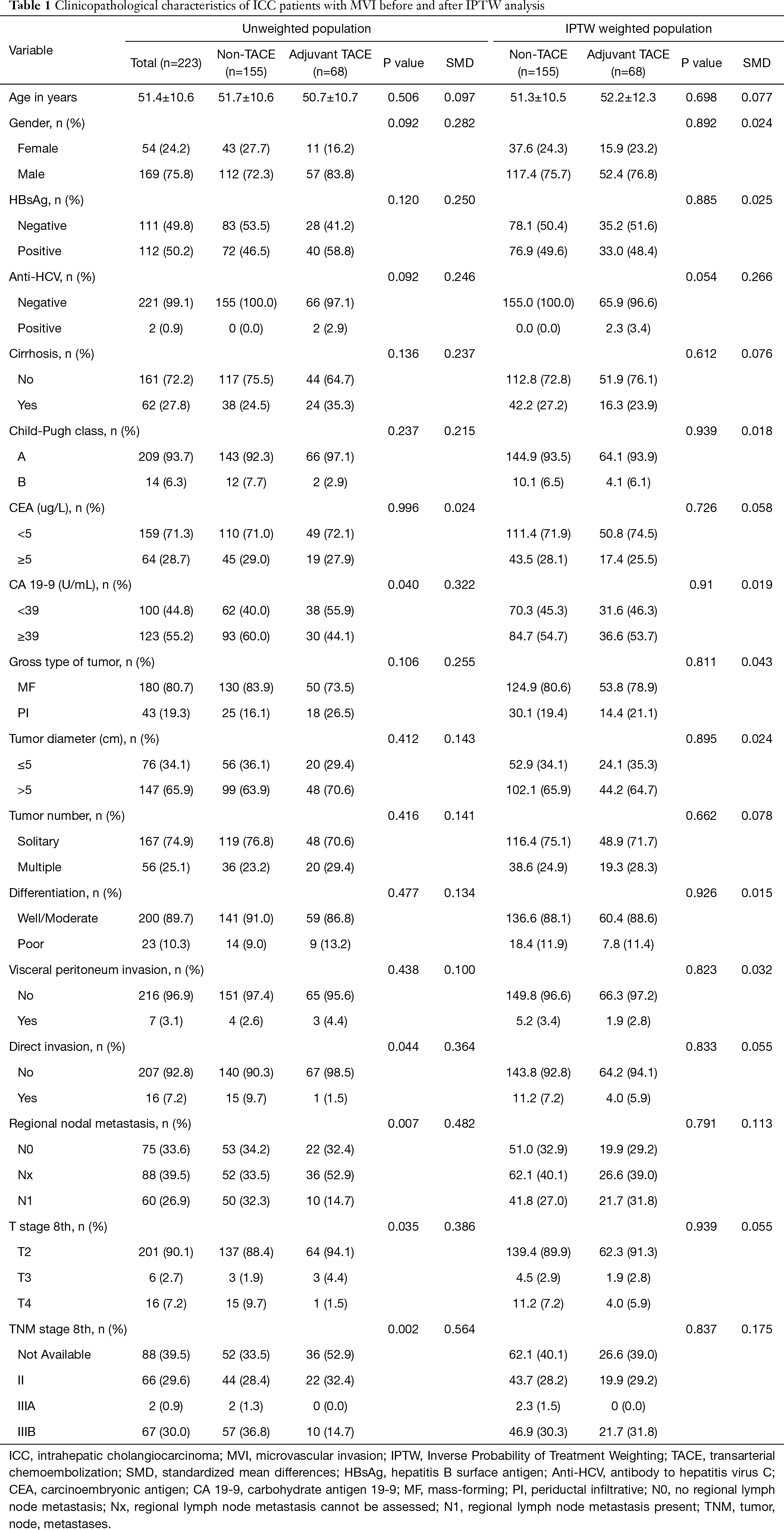 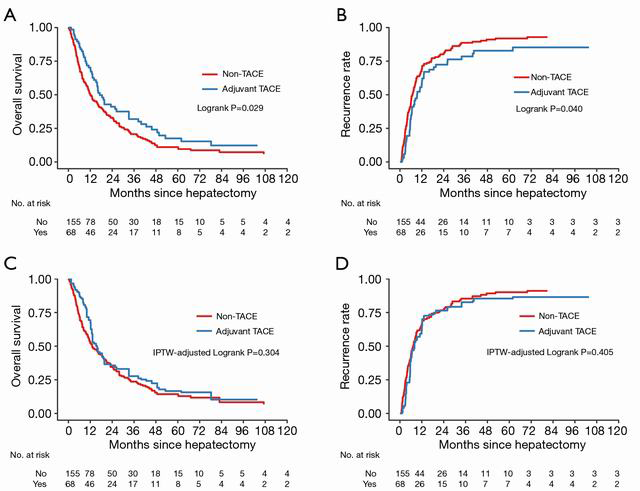 The 1:1 PSM analysis generated 68 pairs of patients, and the baseline characteristics of the 2 groups are shown in Table S1. Consistent with the findings by the IPTW analyses, similar results were obtained after the PSM analyses. Adjuvant TACE was not significantly associated with better long-term outcomes in the ICC patients with MVI (Figure S1).

Independent risk factors for prognosis of patients in the entire cohort

Subgroup analyses for the effect of adjuvant TACE 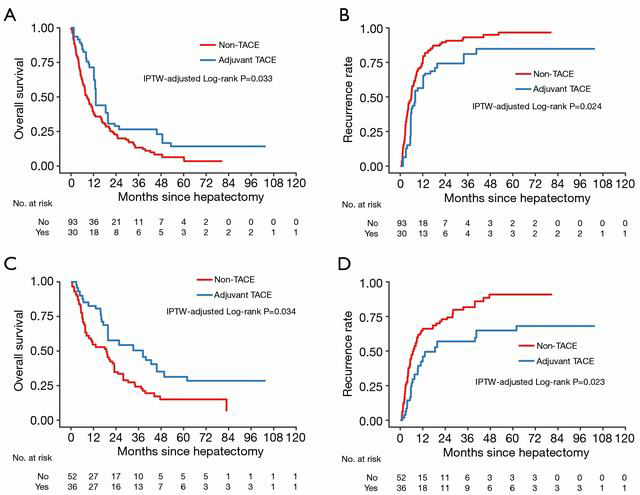 Our current study investigated the impact of adjuvant TACE on patients with ICC involving MVI after curative-intent PH. Our findings suggest that adjuvant TACE was only associated with lower recurrence and better OS in the ICC-MVI patients with elevated CA19-9 or without lymphadenectomy. These finding were consistent and robust across IPTW and PSM analyses.

Previously, many studies indicated that adjuvant TACE might provide survival benefits for patients with HCC when MVI presented (3,4,6,7,26). However, the potential impact of adjuvant TACE on ICC-MVI patients remains uncertain. In this study, our preliminary results before IPTW and PSM showed that adjuvant TACE was associate with better postoperative long-term outcomes in the ICC patients with MVI. However, when compared to the baseline clinicopathological characteristics, some selected biases were observed, which might account for the differences in prognosis between these 2 groups. Patients in the non-TACE group had higher incidences of elevated serum CA19-9 level, direct invasion of adjacent organ, and lymph node involvement than those in the adjuvant TACE group. Patients in these two groups differed significantly by these factors which have been widely proven as independent risk factors for postoperative prognosis of ICC patients by various studies (27-30). After the baseline characteristics of the 2 groups were balanced by IPTW and PSM, the results showed that adjuvant TACE was not associated with improved prognosis among the overall ICC-MVI patients.

It is interesting to note that in subgroup analyses significant TTR and OS differences between the adjuvant TACE and non-TACE groups were observed in the CA19-9 ≥39 U/L and Nx subgroups. The reasons for the TACE’s positive impacts on these populations are not clear from our work. In this study, lymphadenectomy was performed in 135 patients (60.5%), 60 (44.4%) of whom had LN metastasis. This result indicated that ICC involving MVI has a relative higher rate of LN metastasis when compared to that reported in previous studies (31). Moreover, various studies have demonstrated that elevated preoperative serum CA19-9 was associated with LN metastasis (32-36). Concerning 80% or more of hepatic lymph drains through the periportal lymphatic system to the hilar LNs (37), we hypothesized that TACE may result in necrosis or inhibition of micrometastatic foci lay in the deep lymphatic system of the liver when elevated CA19-9 or nonlymphadenectomy was presented. Further studies are needed to better understand the underlying mechanisms.

In our series, all of the ICC involved MVI, and the long-term outcomes in these patients after PH were relatively poor with high recurrence rate and low OS rates. These results revealed that MVI is an adverse factor for recurrence and death of patients with ICC. Various studies have documented that MVI may lead to intra- and extrahepatic disseminations through the portal vein or hepatic vein (38), thus presenting an aggressive tumor biological behavior associated with advanced tumor characteristics and a higher risk of tumor recurrence (17,39). Furthermore, unlike macrovascular invasion, MVI cannot be diagnosed before surgery, it only can be determined by microscopic histological examination after surgery (38). As such, postoperative adjuvant therapy to improve long-term prognosis should be considered for these patients (40). In this study, the association between the adjuvant TACE and better survival was only observed among ICC-MVI patients with elevated CA19-9 and Nx. Therefore, the role of other adjuvant therapeutic strategies in the remaining ICC-MVI patients needs to be investigated.

In addition, we guess that as a locoregional therapy, TACE might offer an advantage in the adjuvant setting in patients with high risk for early intrahepatic recurrence. While, adjuvant chemotherapy may inhibit the invasion and metastasis of tumor cells systemically, adjuvant TACE could potentially improve outcomes in resected ICC-MVI patients that will receive adjuvant modern chemotherapy as well.

The current study has several limitations. First, patient selection for adjuvant TACE was not randomized, so potential selection bias may exist. We have attempted to directly address this basic limitation using the IPTW and PSM analyses. Another limitation of this study is that half of the enrolled patients were diagnosed with HBV-related ICC; whether our findings can be confirmed in other study populations is still uncertain. Third, the drug, dosage, and frequency of adjuvant TACE may affect the outcomes of patients with ICC. Further well-designed randomized clinical trials with an ideal regimen of adjuvant TACE will thus be necessary in the future. Last but not least, although we have collected the largest number of ICC patients with MVI so far, the relatively small sample size limits our power to come to any formal conclusions.

In conclusion, among the ICC-MVI patients who underwent curative-intent PH, only those have elevated CA19-9 or who did not undergo lymphadenectomy might be suitable for adjuvant TACE. Further studies are needed to conﬁrm the results of this study.

Reporting Checklist: The authors have completed the STROBE reporting checklist. Available at http://dx.doi.org/10.21037/jgo-20-443

Conflicts of Interest: All authors have completed the ICMJE uniform disclosure form (Available at http://dx.doi.org/10.21037/jgo-20-443). The authors declare no conflict of interest.

Ethical Statement: The authors are accountable for all aspects of the work in ensuring that questions related to the accuracy or integrity of any part of the work are appropriately investigated and resolved. The study was conducted in accordance with the Declaration of Helsinki (as revised in 2013). The study was approved by the institutional ethics committees of each of the involved hospitals (NO. EHBHKY2020-K-027, 2020ZDSYLL010-P01, and 81YY-KYLL-19-05). Informed consent was routinely obtained before surgery.