Approximately 10 to 60% of hepatocellular carcinomas (HCCs) invade the portal vein system and form a portal vein tumor thrombus (PVTT). The prognosis of HCC patients with PVTT is poor (1,2). HCC with PVTT has different clinical features, different prognosis, and markedly different treatment outcomes (3-5). PVTT is widely regarded as the main route of intrahepatic metastasis of HCC (6). Currently, hypoxia (7), non-coding ribonucleic acids (RNAs) (8), and cancer stem cells (CSCs) (9) have been found to contribute to PVTT development. Further, numerous molecules, including messenger RNAs (mRNAs), such as Chemokine (C-C motif) ligand 20 (CCL20) (7) and RNA polymerase II subunit 5 (RPB5)-mediating protein (RMP) (10), and long non-coding RNAs (lncRNAs), such as plasmacytoma variant translocation 1 (PVT1) (11), intercellular adhesion molecule-1 (ICAM-1)-related (ICR) (9), and hypoxia-inducible factor 1 alpha-antisense RNA 2 (HIF1A-AS2) (8), have been identified and proposed for use as diagnostic and prognostic biomarkers for HCC, and also represent promising targets for HCC therapy. Based on these findings, we sought to apply these molecular biomarkers to individual HCC patients, and to determine the extent to which they may aid the personalized precision therapy of HCC patients with PVTT.

We present the following article in accordance with the MDAR reporting checklist (available at http://dx.doi.org/10.21037/jgo-21-162).

Tumor tissue specimens were acquired from 3 Chinese HCC patients who underwent surgery at Sun Yat-sen University Cancer Centre between 2019 and 2020 (Patient 1, female, 53 years; Patient 2, male, 50 years; Patient 3, male, 57 years). Each patient had three matched samples: (I) primary HCC tumor (PT); (II) adjacent normal (N) liver; and (III) PVTT tissues. This study was approved by the Sun Yat-sen University Cancer Centre Institutional Review Board (No. B2020-265). All participants provided written informed consent. All procedures performed in this study involving human participants were in accordance with the Declaration of Helsinki (as revised in 2013).

Total RNA samples were treated with the RiboMinus Eukaryote Kit (Qiagen, Valencia, CA) to remove ribosomal RNA (rRNA). The NEBNext Ultra Directional RNA Library Prep Kit for Illumina (NEB, Beverly, MA) was used to construct the strand-specific RNA-seq libraries in accordance with the manufacturer’s instructions. Briefly, treated RNA samples were fragmented, and then complementary deoxyribonucleic acid (cDNA) were synthesized using random hexamer primers. To remove the second strand of cDNA, a mixture of 2’-Deoxyuridine 5’-Triphosphate (dUTP) was used for synthetic reactions. The End-It DNA End Repair Kit was used to repair cDNA fragments at the ends. These repaired cDNA was then modified with Klenow to add an A at the 3’ end and then linked to adaptors. The linked cDNA products were purified and the second cDNA strand was removed by uracil DNA glycosylase. After purification, the first strand of cDNA was amplified by polymerase chain reaction for 13–16 cycles. The quality of libraries were assessed by Bioanalyzer 2100 (Agilent, Santa Clara, CA), and sequenced by Novaseq S4 PE150 (Illumina, San Diego, CA) with a length of 150 bp.

We aligned the RNA-seq reads to human reference rRNA database using SortMeRNA. Most of the rRNAs were removed by our experiments. Subsequently, the RNA-seq reads were mapped to the human reference genome (hg38) using STAR (Spliced Transcripts Alignment to a Reference) aligner with default parameters. The human genome sequence was downloaded from GENCODE (Homo sapiens GRCh38/hg38). Next, we reassembled a transcriptome using Cufflinks (version 2.2.1) with GENCODE reference annotations for each dataset of the nine samples, based on the mapped reads.

We identified genes that were differentially expressed between the PTs or the PVTTs and adjacent normal tissues, and between the PVTTs and the matched PTs using GFOLD (generalized fold change) algorithm for each individual patient. GFOLD calculated its own statistics for expression level changes based on the posterior distribution of the log fold-changes in expression. The significance cutoff was set at 0.01 (-sc 0.01) and |GFOLD value| >1.

CIBERSORT was used to deconvolute the immune microenvironment in each sample (12). Absolute immune cell abundance was calculated from the combat corrected fragments per kilobase per million (FPKM) matrix containing 22 functionally defined human immune subsets (LM22) in the CIBERSORT website.

The posterior distribution of the log fold-changes in expression was used to calculate the statistics of GFOLD.

All the related software and scripts are available from the corresponding author on reasonable request. 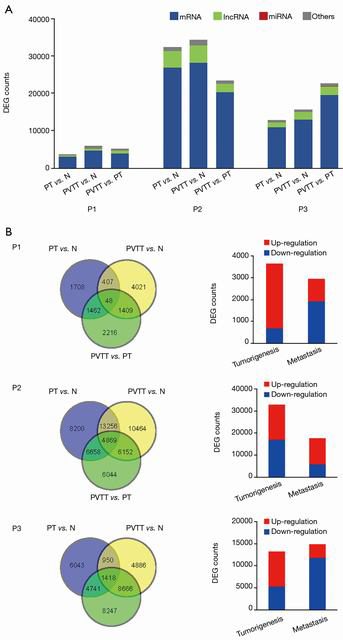 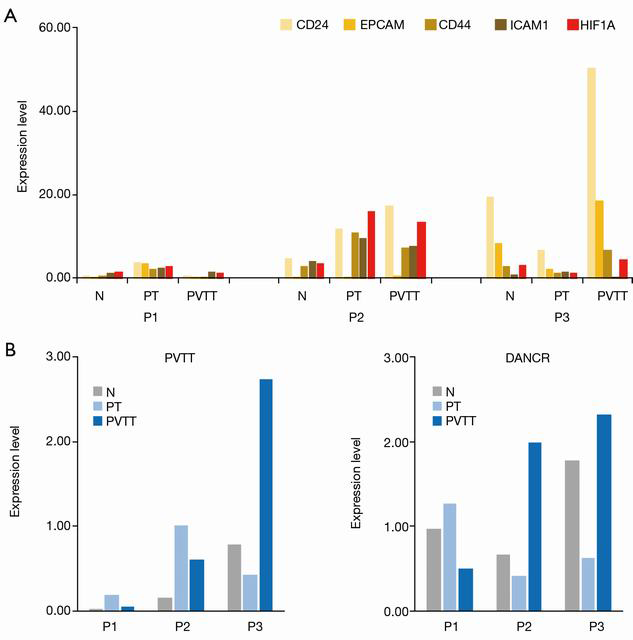 Several lncRNAs have been reported to be involved in the tumorigenesis and metastasis of HCC (19), including Highly Up-regulated in Liver Cancer (HULC) (20), delta-like 1 homolog (Drosophila) (DLK1) (21), PVT1 (11), ICR (9), High Expression In HCC (HEIH) (22), microvascular invasion in HCC (MVIH) (23), HIF1A-AS2 (8), and RP11-166D19.1 (8). PVT1 and differentiation antagonizing non-protein coding RNA (DANCR) are stemness-associated lncRNAs. Compared with PT tissues, PVTT tissues expressed upregulated PVT1 in P3 but downregulated PVT1 in P1 and P2, and PVTT tissues expressed upregulated DANCR in P2 and P3, but downregulated DANCR in P1 (see Figure 3B). Based on the results of LCSC surface markers and stemness-associated lncRNAs, we found that P2 and P3 showed stem cell-like properties, but P1 did not.

The overexpression of Metastasis-Associated Lung Adenocarcinoma Transcript (MALAT1) promotes proliferation and metastasis in HCC. In all 3 patients, the expression of MALAT1 was upregulated in PT and PVTT tissues compared to that of normal tissues (see Figure 4A). Thus, MALAT1 can be used as universal prognostic markers in HCC. In addition, downregulated lncRNA Heart and Neural Crest Derivatives Expressed 2 antisense RNA (HAND2-AS1) in HCC cells was related to cell migration, and we observed the downregulation of HAND2-AS1 in PVTT compared with PT in all 3 patients (see Figure 4B). In P2, the expression levels of proliferation-associated lncRNAs (i.e., zinc finger nuclear transcription factor, X-box binding 1-type containing 1 antisense RNA 1 (ZFAS1), ubiquitin-fold modifier conjugating enzyme 1 (UFC1), paxillin-antisense RNA 1 (PXN-AS1), and gradually increased during hepatocarcinogenesis (GIHCG)) in the PT and PVTT tissues were much higher than those in normal tissues (see Figure 4C,D,E,F). Moreover, the glutaminolysis-associated lncRNA HOXA transcript at the distal tip (HOTTIP) was overexpressed in the PVTT tissues in P3 (see Figure 4G). The proliferation and lipogenesis-associated lncRNA HULC was not upregulated in PT or PVTT tissues in any patient; thus, HULC does not appear to play an important role in HCC development (see Figure 4H). 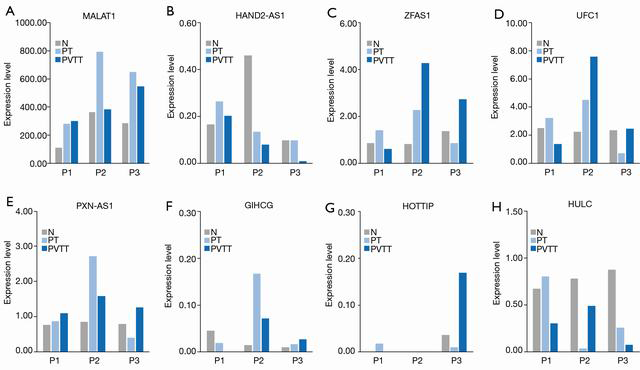 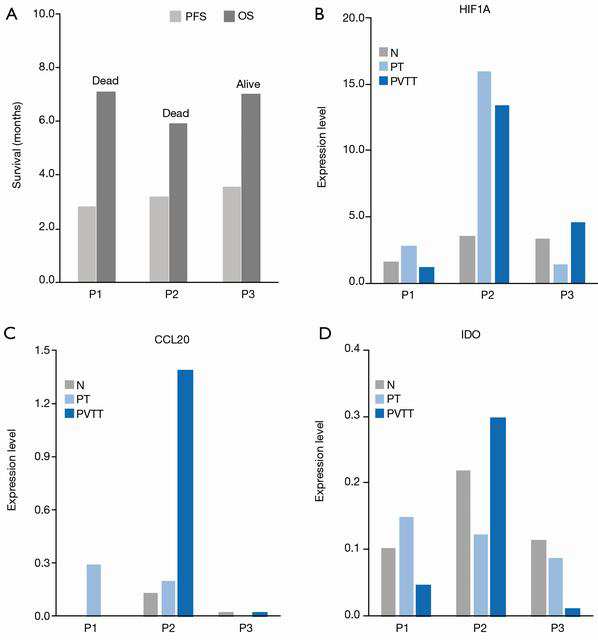 We also found that the proportion of macrophages in the microenvironment was closely related to the survival of HCC patients with PVTT. The more the macrophages in the TME, the shorter the OS. As reported previously, while macrophages are essential for the normal activity of the immune system, their aberrant regulations are related to HCC (26). Macrophages largely infiltrate HCC microenvironment and play roles in the development and progression of HCC, including immunosuppressive function, enhancement of tumor invasion and metastasis, angiogenesis, epithelial-mesenchymal transition, and maintenance of stemness. Thus, there is considerable interest in TAMs targeted immunotherapy for HCC. These strategies include inhibition of monocyte recruitment, elimination of TAMs that are already present in tumor tissues, functional re-education of TAMs polarization, and neutralization of tumor-promoting products of TAMs. Preliminary data on TAMs-targeted drug interventions suggest that these insights can be successfully translated into new treatment options for HCC patients.

We would like to thank Shanghai Tongshu Biotechnology Co. Ltd. for providing us with technical support, and all of the participants for their kind cooperation in this study.

Funding: This study was funded by the National Natural Science Foundation of China (Grant No. 81571780).

Reporting Checklist: The authors have completed the MDAR reporting checklist. Available at http://dx.doi.org/10.21037/jgo-21-162

Conflicts of Interest: All authors have completed the ICMJE uniform disclosure form (available at http://dx.doi.org/10.21037/jgo-21-162). The authors have no conflicts of interest to declare.

Ethical Statement: The authors are accountable for all aspects of the work in ensuring that questions related to the accuracy or integrity of any part of the work are appropriately investigated and resolved. All procedures performed in this study involving human participants were in accordance with the Declaration of Helsinki (as revised in 2013). This study was approved by the Sun Yat-sen University Cancer Centre Institutional Review Board (No. B2020-265). All participants provided written informed consent.