As the most common cancer and the second most common cause of death worldwide, colorectal cancer (CRC) is likely to metastasize to liver, followed by lungs and peritoneal cavity, yet rarely to bone (1,2). It is reported that the incidence of BM from CRC is 6.0–10.4% (3) but has gradually increased in recent years (4). Bone metastasis (BM) is a rare and special type of metastasis, presenting with very poor prognosis (5). BM is completely a special distant metastasis compared to liver or lung metastases, and its uniqueness and particularity should be attracted more attention in current clinical practice.

The diversity and complexity of metastasis provide a big challenge in the treatment of CRC with BM. How to make treatment plan and predict the treatment effect is very crucial. Either overtreatment or undertreatment for BM could have an adverse impact on prognosis and quality of life of patients. However, because of low incidence and poor prognosis of BM, the current treatment strategy for this group of patients has relatively been ignored. Previous studies with regard to the treatment plan decision of CRC patients with BM mainly originated from clinical experience and lack standardized guidance, because of the relative rarity of BM in CRC patients.

Previous studies have reported about the characteristics and clinical outcomes of BM from CRC (5,6). However, risk model for predicting survival outcome for CRC patients with BM are scarce. Construction of a clinically useful risk stratification based on clinicopathologic factors will allow classification of patients according to different prognosis, which have important clinical value in guiding follow-up care and treatment. Therefore, the aims of our study were to (I) identify the clinicopathological characteristics and prognostic factors of BM from CRC; (II) to develop a comprehensive and practical risk stratification for evaluation of prognosis of CRC patients after BM diagnosis. We present the following article in accordance with the Tripod reporting checklist (available at http://dx.doi.org/10.21037/jgo-20-586).

The study was conducted in accordance with the Declaration of Helsinki (as revised in 2013). This study was approved by the Ethics Committee of Cancer Hospital, Chinese Academy of Medical Sciences (NCC2019S-060) and informed consent was taken from all the patients.

Patients who were diagnosed with BM from CRC between January 2008 and December 2017 at Cancer Hospital, Chinese Academy of Medical Sciences, were retrospectively identified. Patients without follow-up information or patients with BM from other malignant tumors were excluded from our study. The primary CRC lesion was confirmed by histopathological examination. The American Joint Committee on Cancer (AJCC) TNM stage and BM were identified by histopathological or imaging examinations such as standard X-rays, whole-body bone scans, computed tomography (CT), magnetic resonance imaging (MRI) and positron emission tomography-computed tomography (PET-CT). For the number of bone metastases, two adjacent vertebral metastases were classified into the solitary bone involvement, while non-consecutive metastases or more than 2 consecutive vertebral metastases were classified as multiple bone involvement. Synchronous BM refers to bone metastases found within 3 months after the diagnosis of CRC. Metachronous BM refers to bone metastases found more than 3 months after the diagnosis of CRC. The cancer specific survival (CSS) was defined as the time from the BM diagnosis until cancer-associated death or the end of follow up.

We developed a weighted scoring system and assigned points for each adverse prognostic factor according to its beta coefficients (β) value. The insignificant risk factors (P>0.05) received 0 point. Adverse factors (P<0.05) with 0<β<0.5 received 1 point; those with 0.5≤β<1 received 2 points. Risk groups were stratified based on total risk scores of prognostic factors.

The CSS was assessed with Kaplan-Meier method, with the log-rank tests used to compare subgroups. In order to reduce the impact of sample size, factors with P<0.20 in univariate Kaplan-Meier analyses (7) were finally tested in multivariable COX regression analysis via a backward stepwise selection process. Hazard ratio (HR), corresponding 95% confidence interval (CI) and β were also calculated by COX regression model. The discrimination power of risk stratification was measured by calculating the area under the time-dependent receiver operating characteristic (AUROC) curve. Calibration curves were provided to internally evaluate the calibration ability of risk stratification. All statistical analyses were performed with SPSS version 25.0 for Mac or R version 3.6.0. It is considered as statistically significant when P<0.05.

Patterns of BM and extra-osseous metastasis

The treatments for patients after diagnosis of BM were seen in Table 1. There were 66 patients skipped surgery for primary tumor mainly due to the inability of radical resection. All patients received chemotherapy after diagnosis of BM, and some (n=79, 39.5%) also received targeted therapy. There were 85 patients (42.5%) and 57 patients (28.5%) receiving bisphosphonates and radiotherapy, respectively. Only 3 patients (1.5%) took surgery for metastatic tumors of bone because of spinal cord compression. 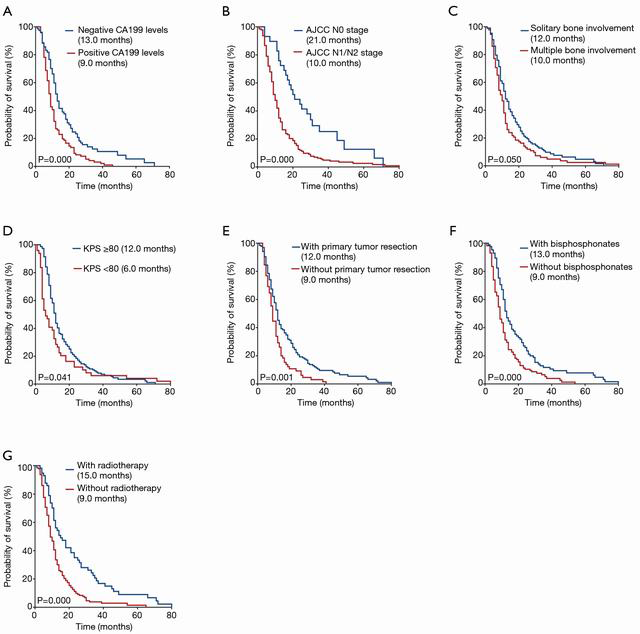 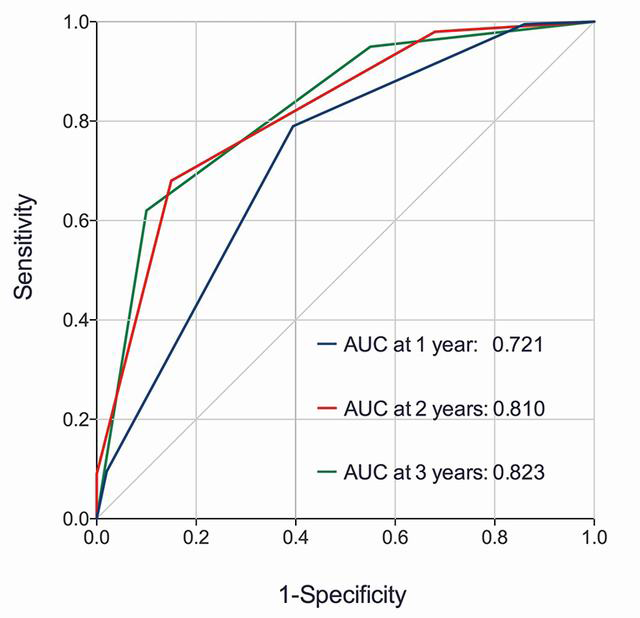 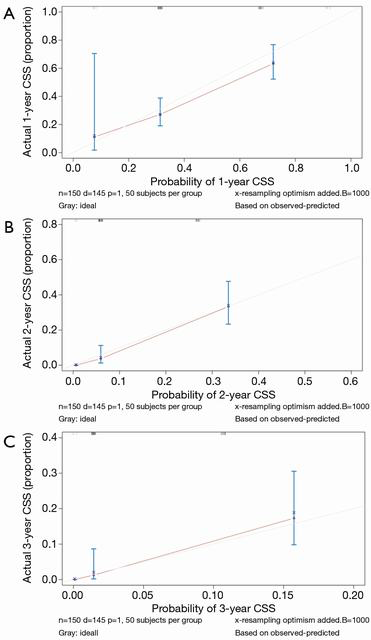 Our study retrospectively reviewed the clinicopathological characteristics of 200 patients with BM from CRC, discussing prognostic factors and a novel risk stratification for CSS. Many researches have been reported that spine is the leading site of BM from solid tumors (8,9). And the common sites of BM from CRC are reportedly the spine, followed by the pelvis and long bones, which is highly consistent with our study (10).

The prognosis of patients with BM from CRC is very poor because of advanced disease stage, with a median survival time of 7.0 to 17.8 months after BM diagnosis (6,10,11). In our study, the overall median CSS time was 11 months (95% CI: 9.7–12.3) from the time of BM diagnosis, with 30.0%, 17.0% and 7.0% of 1-, 2- and 3-year CSS rate. Although the median CSS of patients with adenocarcinoma was longer than those with mucinous adenocarcinoma, signet-ring cell carcinoma and other pathological types (11, 9, 8, and 4 months, respectively), there was no statistical significance (P=0.453). Median CSS time of patients with metachronous BM and synchronous BM were both 11 months. The CSS did not differ significantly between the two groups (P=0.571) in univariate analysis. Kawamura et al. also found there is no significant difference in survival between metachronous and synchronous groups after BM diagnosis (P=0.59) (8).

Then we analyzed the prognostic factors based on multivariable analysis, which revealed the CSS in patients with regional lymph node metastasis was found to be shorter than patients who were without. In addition, patients with positive serum CA199 levels at BM diagnosis had poorer prognosis in CRC patients than those with negative. High CA199 levels is one of indicators of colorectal tumor, but there are rarely reports about the its role in prognosis of CRC, while most of researches show it plays a key role in CRC diagnosis (12,13). We also found high serum CEA levels and LHD levels were significant prognostic indicators for CSS by univariate analysis, which had been shown in many reports (10,14). So, we suggest careful surveillance in those indicators for patients with BM from CRC.

The multiple bone involvement was found to be an independent prognostic factor for CSS, similar to some previous studies (15,16). However, Lun et al. reported there was no association between the number of bone metastases and survival (17). Such differences might due to the sample size and selection bias in different studies. In our study, KPS scores at BM diagnosis less than 80 were associated with a worse prognosis compared to scores ranging from 80 to 100. This is in line with previous researches that have identified performance status as one of the most valuable prognostic factors for survival of BM patients (16-18).

There exists controversy regarding to the benefit of primary tumor resection in advanced CRC. Many prior studies suggest a clinical benefit to improve survival with surgery (19-21), while others report there is no benefit (22,23). We found the patients with BM from CRC could significantly be beneficial from primary tumor resection with improved CSS. That might be because removal of primary tumor could prevent tumor-related complications such as bleeding, obstruction and perforation, further improving quality and survival of patients with BM.

The treatment of bisphosphonates and radiotherapy for CRC patients with BM is strongly recommended. Bisphosphonates have been used for prevention of skeletal-related events and reduction of pain from BM in recent years (24,25). According to our study, 42.5% of patients received bisphosphonates therapy for BM and the remaining patients didn’t. The difference in median CSS between two groups is significant (13 vs. 9 months, respectively), showing that patients who took bisphosphonates were associated with better prognosis.

Radiotherapy was found to be associated with longer CSS, although quality-of-life data were lacking. In patients with palliative radiotherapy for BM, median CSS time after BM diagnosis was prolonged obviously (15 vs. 9 months, respectively). Previous researches have verified that radiotherapy is the approach most commonly used to treat severe pain from BM, which could improve survival directly and indirectly (26-28). In addition, the chemotherapy can notably improve survival of BM as many researches have demonstrated (26,29,30). However, because all patients had received adjuvant chemotherapy in our study, the utility of chemotherapy in improving CSS was not investigated.

Here, we developed a weighted scoring system to facilitate risk stratification for patients with BM from CRC. As an example, a CRC patient, with regional lymph node metastasis, negative CA199 levels, KPS ≥80 and multiple bone involvement, received primary tumor resection, bisphosphonates therapy and radiotherapy for BM, then he would be assigned for 0 point with a median CSS benefit of up to 35 months (95% CI: 20.6–49.4). In contrast, patients with all adverse factors (10 points) showed the worst CSS of only 5 months (95% CI: 3.6–6.4). So, we suggest that more medical care might be necessary for high risk patients. And individualized medical care should be considered for patients in different risk groups. This risk stratification had good discrimination and calibration, implying a clinical value in predicting prognosis of CRC patients with BM.

Our study had some limitations. First, this was a retrospective designed study, and some data might have missed. For example, not every patient showed complete AJCC TNM stage. In addition, this was a single-center study. Because of the low incidence of BM from CRC, the number of patients was small, which limited the external validation. Finally, because the treatment process for CRC patients with BM is very complicated, many potential prognostic factors including lymphocyte count, inflammation, nutritional status and sarcopenia are missing to a large extent. Therefore, it is regretful that we could not accurately and objectively evaluate the impact of these factors on the prognosis. Nonetheless, we believe our study will be useful to both clinicians and patients.

Given the poor survival of BM from CRC, information regarding how to evaluate the prognosis of such patients should be considered in diagnosis and treatment. Here, we found AJCC N stage, CA199 levels, multiple bone involvement, KPS scores, primary tumor resection, bisphosphonates and radiotherapy were prognostic factors significantly affecting survival. Four risk groups showed significant differences in CSS, which could help physicians determine the prognosis of CRC patients with BM. The novel risk stratification has considerable practical implications and may be useful in selection of appreciate care and treatment.

Funding: This work was supported by Sanming Project of Medicine in Shenzhen (No. SZSM201911012).

Reporting Checklist: The authors have completed the Tripod reporting checklist. Available at http://dx.doi.org/10.21037/jgo-20-586

Conflicts of Interest: All authors have completed the ICMJE uniform disclosure form (available at http://dx.doi.org/10.21037/jgo-20-586). The authors have no conflicts of interest to declare.

Ethical Statement: The authors are accountable for all aspects of the work in ensuring that questions related to the accuracy or integrity of any part of the work are appropriately investigated and resolved. The study was conducted in accordance with the Declaration of Helsinki (as revised in 2013). This study was approved by the Ethics Committee of Cancer Hospital, Chinese Academy of Medical Sciences (NCC2019S-060) and informed consent was taken from all the patients.