Colorectal cancer (CRC) is the fourth most prevalent malignancy and the fifth leading cause of cancer death worldwide (1). Liver is the most common site of metastases from CRC and approximately 15% of colorectal cancer liver metastases (CRLM) present liver lesion at the initial diagnosis (synchronous metastasis) (2,3). Despite advances in systemic therapy, surgery is still an irreplaceable part of modern therapy approach for CRLM. The median survival of CRLM without treatment is 9.6 months, while the 5-year overall survival (OS) of resected CRLM approaches 50 months (4). In recent years, surgical strategies of synchronous CRLM have changed dramatically. Although several studies revealed the surgical outcome or survival advantage among classical colorectum-first, liver-first, and synchronous surgery is similar for CRLM, synchronous resection has gradually been accepted and popularized with advantages of safety, minimal damage, and less cost (5-8). However, few studies so far have focused on outcome of this subgroup of patients who receive simultaneous resection for CRLM. The survival of CRLM patients undergoing simultaneous resection remains highly variable and more precise categorization is needed preoperatively to identify those who may benefit more from surgery. Fong’s score (9) is a well-accepted prognostic system initially formulated for metachronous CRLM, and GAME score (10), put forward by Margonis, is a preoperative model based on American cohort requiring genetic status of KRAS, which is not specifically designed for simultaneous CRLM resection. Therefore, we provided this scoring system merely requiring clinicopathological data as an option for CRLM patients undergoing simultaneous resection for preoperative risk stratification.

The present study assessed the preoperative prognostic factors in CRLM patients undergoing synchronous resection. A nomogram was established and validated to quantify the impact of every variable. We present this article in accordance with the TRIPOD reporting checklist (11) (available at http://dx.doi.org/10.21037/jgo-20-329).

Clinicopathological information of 415 consecutive patients with CRLM who underwent combined liver and colon/rectum resection with or without chemoradiotherapy from January 2010 to March 2019 in Changhai Hospital was retrospectively collected for analysis. Telephone follow-up was completed by May 2020. Inclusion criteria were as follows: (I) verified diagnosis of CRC by colonoscope and biopsy; (II) synchronous liver metastasis demonstrated by enhanced computed tomography (CT) scan of abdomen or enhanced liver magnetic resonance (MR); (III) R0 resection of primary lesion and liver metastasis; (IV) definite diagnosis of CRC with liver metastasis by postoperative biopsy; (V) treated with postoperative systemic chemotherapy (5-FU-based) ± targeted therapy. Exclusion criteria were as follows: (I) presence of extrahepatic metastasis; (II) 30-day mortality from operative complications; (III) loss to follow-up or absence of clinicopathological information. A total of 234 cases meeting the eligibility criteria above were included in this study.

The study was conducted in accordance with the Declaration of Helsinki (as revised in 2013). This study was approved by the Institutional Review Board of Changhai Hospital, Secondary Military Medical University, Shanghai, China (No. CHEC2015-146). Because of the retrospective nature of the study, the requirement for informed consent was waived.

Categorical variables were analyzed with non-parametric test and continuous data with Student t-test or Log-rank test. Univariable and multivariable Cox regression analyses were employed to assess prognostic factors. Survival analyses were performed with Kaplan-Meier method, and compared by log-rank test.

The 234 patients were grouped into training cohort and validation cohort by a ratio of 3 to 1 (174:60) with random number (Figure 1). Univariable and multivariable Cox regression analyses to identify predictors of survival were performed using data in training cohort. For the sake of comprehensive inspection of relevant factors, variables with P<0.15 in univariable analysis were entered into multivariable analysis. Hazard ratio (HR) and 95% confidence interval were reported and variables with P less than 0.05 in multivariable analysis were considered statistically significant. Based on the results of multivariable Cox regression analysis, a nomogram was generated to predict 1- and 3-year OS of CRLM patients undergoing synchronous resection. The predictive accuracy and discriminative ability were evaluated by calibration plot and survival curve, respectively. We adopted time-dependent receiver operating characteristic (ROC) curve to compare the accuracy of the nomogram with Fong’s clinical risk score (CRS) system (9). 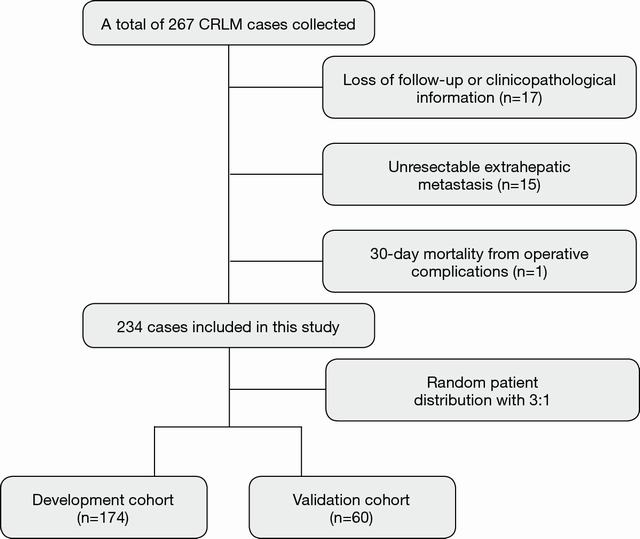 Figure 1 Flowchart of case selection and distribution in this study.

Clinicopathological characteristics of the patients

Among these 234 patients, 174 patients were included in the training cohort while 60 in the validation cohort. The 3-year OS in this study was 30.3% and median follow-up time was 26 months. Preoperative clinicopathological characteristics comparison in the two groups showed no statistical differences (P≥0.05, Table 1). Also, survival analysis comparing OS between patients receiving surgery in different periods showed stable procedure outcome through the follow-up (Figure S1, P=0.47). 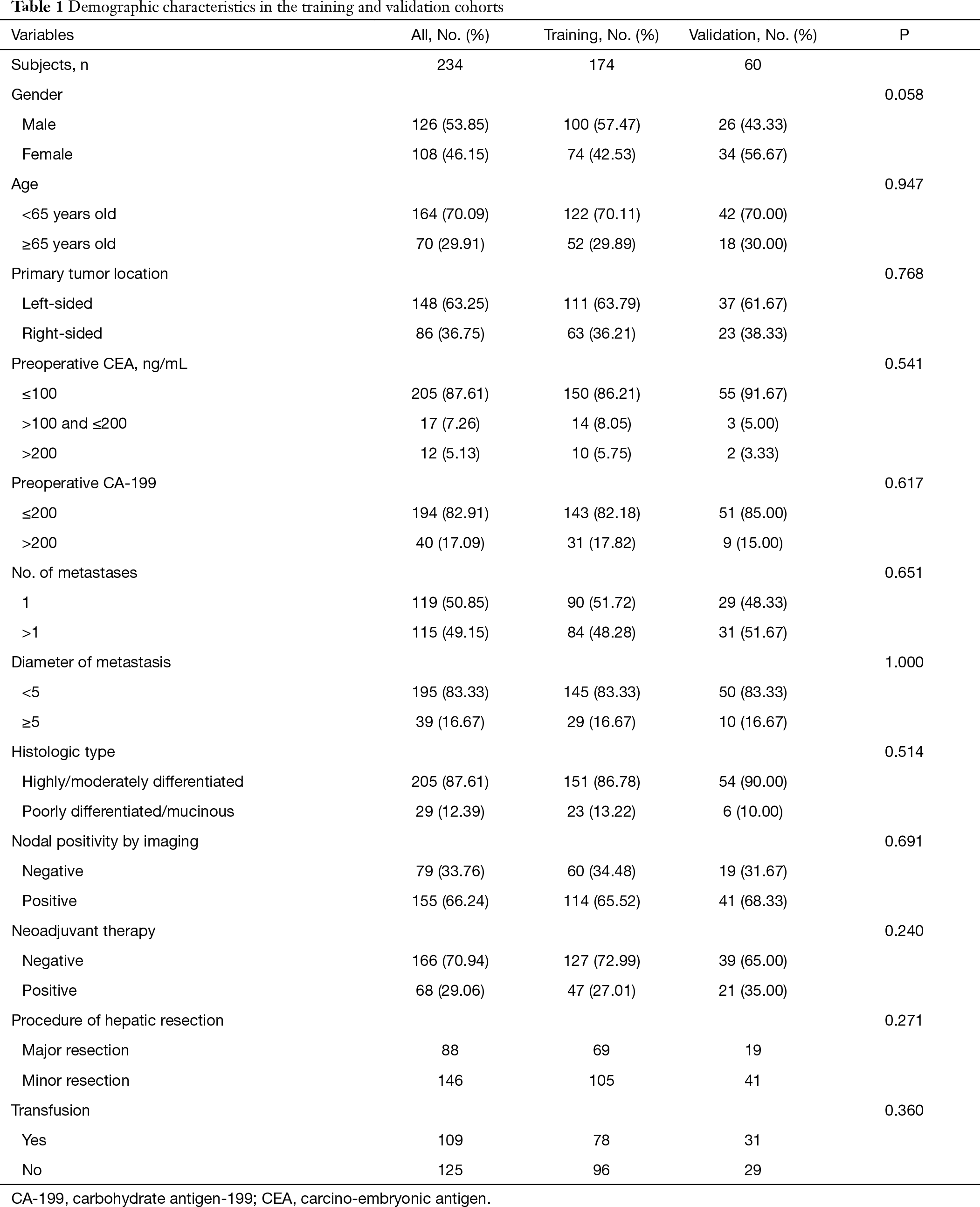 Preoperative prognostic factors of OS in the training cohort

In training cohort, the hazard ratio (HR) and P value with 95% confidence interval of every candidate predictor generated by Cox regression analysis are shown in Table 2.  Presence of positive-node primary defined by enhanced CT/MR, preoperative CEA level and primary tumor site are statistically associated with OS in univariable analysis. These three factors combined with tumor grade (P=0.111) and number of liver metastases (P=0.058) were included in further multivariable analysis and all these five variables were demonstrated to be independent risk factors associated with OS of patients receiving simultaneous resection for CRLM. Patients with higher preoperative CEA level, right-sided primary location, poor tumor grade, positive lymph node and multiple liver metastasis tend to have less opportunity of long-term postoperative survival according to above results. 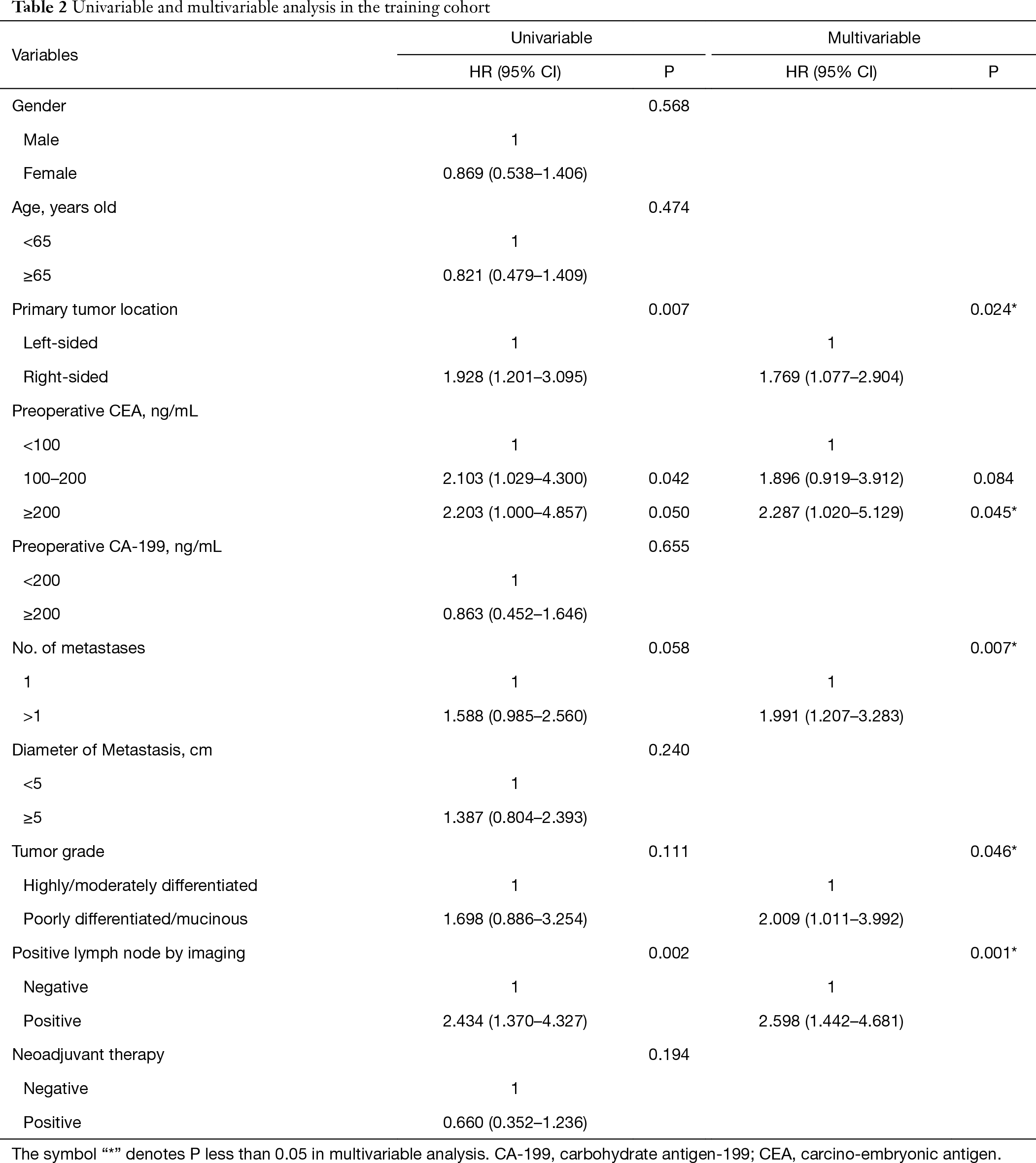 Generation and validation of predictive nomogram for OS

A nomogram was formulated based on five independent risk factors selected by multivariable analysis of Cox proportional hazard model to visualize and quantify the weight of every factor (Figure 2). We applied the nomogram to all cases in both training and validation cohorts and calculated the total score and predicted probability of 1- and 3-year survival of every patient. Calibration plot graphically showed good fitness between estimated and actual 1- and 3-year survival in both cohorts (Figure 3). 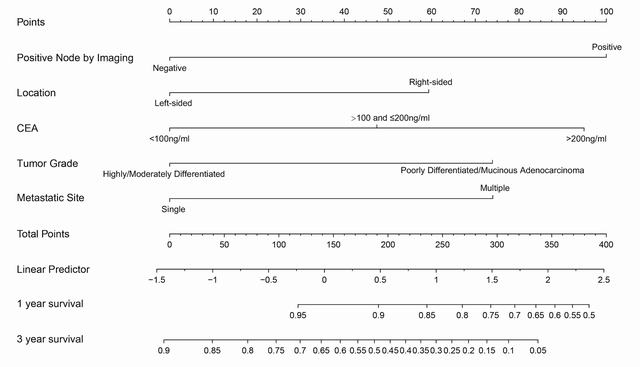 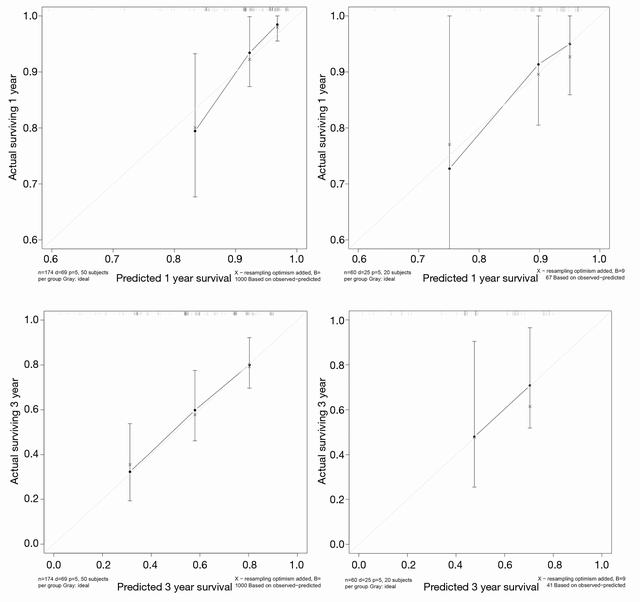 Time-dependent ROC curve by Kaplan-Meier method was adopted to assess the predictive power. To estimate the predictive validity of our scoring system, we applied modified Fong’s scoring system: (I) dissected lymph node biopsy replaced with MR finding, and (II) disease-free interval uniformly deemed as less than 12 months. The result showed that our nomogram scoring system can better predict 1-year survival [area under curve (AUC) 0.788 vs. 0.652 and 0.702 vs. 0.591 in training and validation cohort respectively]. As for 3-year prediction, modified Fong’s score retained high accuracy, with AUC 0.712 and 0.801 in training and validation cohorts respectively, while slightly lower than those of our nomogram (0.752 and 0.848,  Figure 4). However, in predicting 5-year OS, both Fong’s score and our model showed low power of test, partially reflecting the heterogeneity among long-surviving CRLM patients. 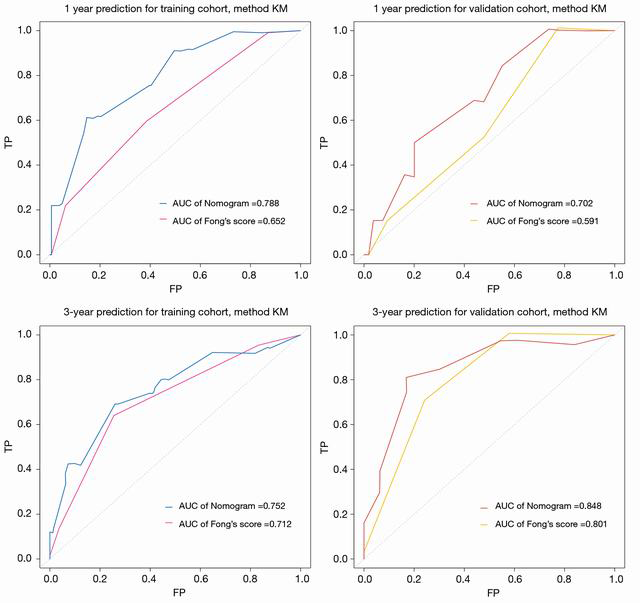 For convenience of clinical use, we stratified patients with maxstat, an algorithm in R used to decide on cut-point to yield the most significant difference. Based on the result, a total mark of 135 was identified as the cut-point and patients were divided into low- and high-risk groups. Survival analysis was performed by Kaplan-Meier method with log-rank test and graphically displayed in Figure 5, showing good discriminability of this stratification solution (P<0.001). Among three groups, there were statistical differences in several postoperative pathological characteristics including primary location, tumor grade, pT stage, pN stage, peripheral nervous invasion, and number of liver metastases (P<0.05, Table 3). 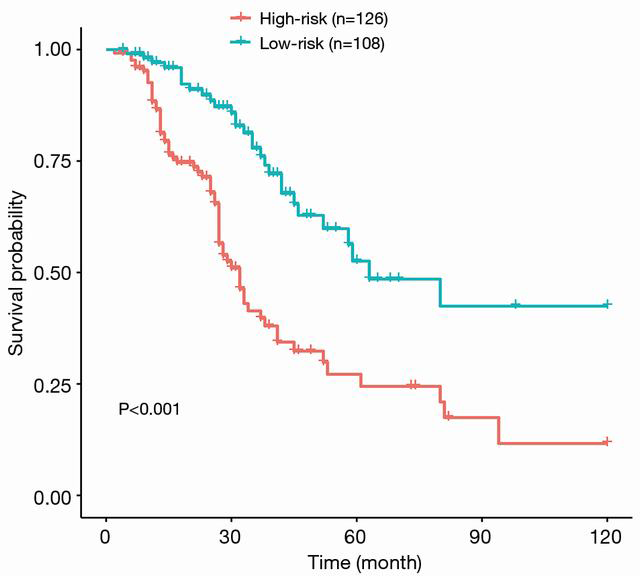 Combined primary tumor and liver resection is the most preferred curative treatment for synchronous CRLM and should be taken into consideration when R0 resection is possible (13). To date, simultaneous surgery has been accepted widely for its perioperative safety, good long-term effects and improved economic efficiency (14,15). However, when CRLM patients decide to receive synchronous surgery for complete R0 resection, the individual oncological benefit is still difficult to predict. Therefore, optimal preoperative prognostic models for patient selection are required.

The present study demonstrated that preoperative factors including primary tumor location, preoperative CEA level, number of liver metastases, tumor grade and positive lymph node by imaging were independent indicators to predict survival benefit from surgery, which was in line with findings of certain reports (16-18). Notably, there was no significant difference in OS between the patients receiving neoadjuvant chemoradiotherapy (nCRT) or not. Despite that the National Comprehensive Cancer Network (NCCN) recommends 6 months of perioperative chemotherapy, standard treatment strategy is poorly  defined (19). Neoadjuvant therapy has been proposed to be an essential part of comprehensive treatment, and individual response to nCRT reflects tumor biologic characteristic and prognosis (20,21), while redundant chemoradiotherapy has been reported to cause liver damage and poor short-term outcome (22). Our data suggested that neoadjuvant therapy was not essential when patients with resectable CRLM treated with postoperative chemotherapy ± targeted therapy.

Nomograms have been considered a reliable tool to quantify risk factors of prognosis (23,24). In our study, a nomogram based on five prognostic indicators was generated to predict 1- and 3-year OS of synchronous CRLM patients undergoing combined resection. The predictive accuracy and the discriminative ability of the nomogram were internally and externally validated, and the results showed good fitness between estimated and actual 1- and 3-year OS. At present, Basingstoke score system, Nordlinger scoring system, Iwatsuki scoring system and Fong’s CRS scoring system, which requires postoperative biopsy of primary tumor, are widely used for the prognosis evaluation of CRLM patients undergoing staged resection, but might not be appropriate for simultaneous resection (9,25-27).

According to the nomogram-based stratification, patients in low-risk group have a highly favorable outcome, and simultaneous resection is a rational option for such patients. Patients in high-risk group have a relatively poor outcome, therefore, further studies of the better surgical and therapeutic strategies for such patients are needed. There was a statistically significant difference in primary location, tumor grade, pT and pN stage, neural invasion, and metastatic site among the three groups. However, despite genetic predictors having been used with increasing frequency for patients with CRLM, the status of KRAS, NRAS, and BRAF did not differ obviously among risk groups (28,29).

The present study has several noteworthy limitations. First, our preoperative prognostic nomogram model was based on the retrospective data from a single clinical center, which may have biased the selection. Second, this model was internally validated with part of cases in our dataset but not externally validated. Third, incomplete genetic testing results and neoadjuvant therapy schemes might limit the accuracy of our conclusions. We do hope with the popularization of more accessible genetic testing method, molecular pathology will serve a prior part in future scoring systems. Further exploration is urgently needed to provide more precise risk assessment for CRLM patients.

This study formulated and validated a practicable preoperative prognostic nomogram model for surgeons and CRLM patients to predict individualized mortal risk after combined resection. We also designated cut-off to stratify patients at different level of risk to provide better assessment of postoperative survival. The CRLM patients ranked high-risk by the scoring system should consider comprehensive and more individualized treatment.

Reporting Checklist: The authors have completed the TRIPOD reporting checklist. Available at http://dx.doi.org/10.21037/jgo-20-329

Conflicts of Interest: All authors have completed the ICMJE uniform disclosure form (available at http://dx.doi.org/10.21037/jgo-20-329). The authors have no conflicts of interest to declare.

Ethical Statement: The authors are accountable for all aspects of the work in ensuring that questions related to the accuracy or integrity of any part of the work are appropriately investigated and resolved. The study was conducted in accordance with the Declaration of Helsinki (as revised in 2013). This study was approved by the Institutional Review Board at Changhai Hospital prior to the collection of data (No. CHEC2015-146). Because of the retrospective nature of the study, the requirement for informed consent was waived.