External validation study of the 8th edition of the American Joint Committee on Cancer staging system for perihilar cholangiocarcinoma: a single-center experience in China and proposal for simplification

Cholangiocarcinoma (CCA) is a rare biliary tract tumor that often presents as advanced disease and is usually challenging to diagnose and treat (1,2). CCA is divided into intrahepatic and extrahepatic CCA, which includes perihilar CCA (pCCA) and distal CCA (3). PCCA is a tumor that arises from the bifurcation of the hepatic ducts; the lower boundary is the site of cystic duct origin and the upper boundary is the secondary branches of the left and right hepatic ducts (4). Despite improvements in diagnosis and treatment, pCCA is often associated with universally poor outcomes (5,6). Complete resection of tumors with a negative margin is the primary curative option for patients with pCCA (7-9), although the majority of patients are not suitable candidates for curative resection at the time of presentation (1,10). Yet, even though some patients accept radical resection, the prognosis is still poor (8,11). In addition to radical resection, liver transplantation is another curative treatment option for selected patients with pCCA (12,13).

The American Joint Committee on Cancer (AJCC)/Union for International Cancer Control (UICC) tumor-nodes-metastasis (TNM) staging system is the most popular and powerful prognostic tool for predicting overall survival (OS) for most malignancies (14-19). It provides clinicians with a knowledge-based and robust tool in the battle against cancer (20). Since the 7th edition of the AJCC staging system was published in 2009, a separate staging system has been established for pCCA (14). Several changes were introduced to enhance the discrimination ability of the 8th edition in predicting the prognosis of patients with pCCA (21). In terms of T category, this new classification excluded Bismuth-Corlette Type IV from the T4 category. In the 7th edition, the N category was classified according to the site of metastatic lymph nodes (LNs), with N1 representing regional LN metastasis and N2 defined as metastatic LNs located near the pericaval, superior mesenteric, periaortic artery, and/or celiac artery (14). Meanwhile, the 8th edition has introduced an entirely new N category for pCCA, defining N1 as 1–3 metastatic regional LNs and N2 as >3 metastatic regional LNs (21).

The current study had a retrospective design and was carried out in accordance with the principles of the Declaration of Helsinki (as revised in 2013). The ethics committee of West China Hospital, Sichuan University, approved this analysis and waived the requirement for informed consent owing to its retrospective nature (No. 2019753).

Owing to the retrospective nature, the ethics committee waived the requirement for informed consent. All patients who underwent radical resection for pCCA between January 2010 and December 2018 in our institution were identified. Patients with histologically confirmed pCCA were included in the study. The exclusion criteria were as follows: (I) loss to follow-up since discharge; (II) patients who underwent non-curative intent surgery; (III) postoperative mortality within 90 days; (IV) patients with a final pathological diagnosis other than pCCA; and (V) patients with missing data. A routine histopathological workup was carried out by the Department of Pathology for all resected specimens.

The operative technique was depicted in our previous study (25). “LNs of the proper hepatoduodenal ligament and the hepatic artery, along with those posteriors to the pancreaticoduodenal artery were routinely resected. Except for Bismuth type I, hemihepatectomy and resection of the caudate lobe was performed routinely. R0 was defined as no residual tumor (neither macroscopically nor microscopically), and R1 was defined as microscopic positivity. The T category of pCCA was mainly determined by surgical and pathologic records. They attended outpatient follow-ups every 2–3 months for the first year postoperatively, and every 3–6 months thereafter. Measurements of tumor markers and liver function, as well as computed tomography (CT) and/or magnetic resonance imaging (MRI) examinations, were performed for assessment at each visit. Patients were followed-up until January 2020. 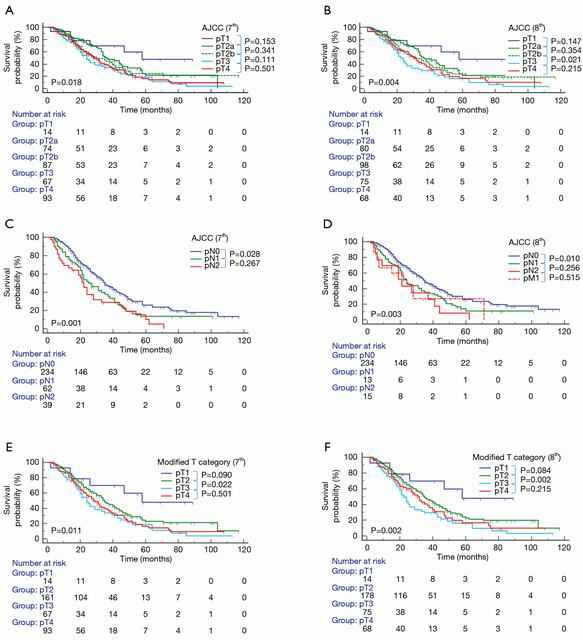 In the 7th and 8th editions of the AJCC staging system, both T2aN0M0 and T2bN0M0 are classified as TNM stage II. We compared the OS between pT2a and pT2b patients in the N0 category based on the 8th edition. To avoid the influence of surgical technique on prognosis, patients with R1 margins (n=28) were excluded from the analysis. Finally, 52 and 54 patients were included in the T2aN0M0 and T2bN0M0 groups, respectively. Patients with T2a tumors had a 1-, 3-, and 5-year survival rate (YSR) of 92.2%, 58.2%, and 22.8%, respectively, compared with 90.6%, 50.3%, and 31.1% for patients with T2b tumors, respectively. No statistically significant difference in survival was observed (P=0.745). Next, we merged T2a and T2b into a T2 category for further investigation. After modification, based on the 7th edition (Figure 1E), differences between T2 and the adjacent subcategories, which were previously absent, became apparent. We found that the differences between T2 and the adjacent subcategories were more obvious when the 8th edition was used (Figure 1F). 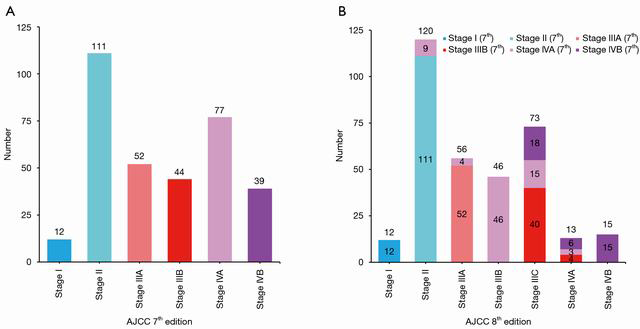 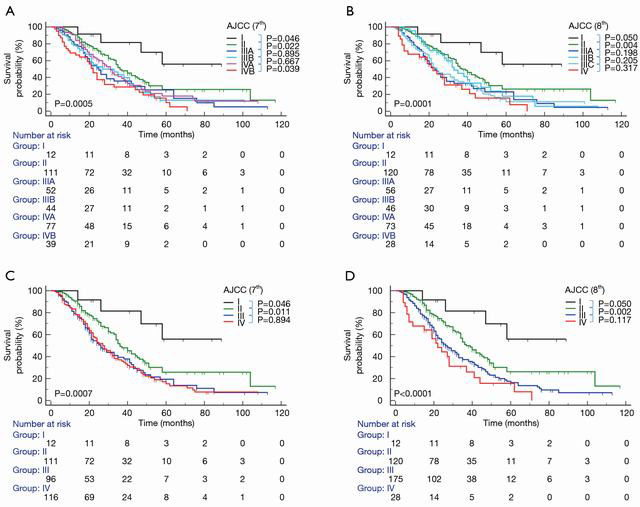 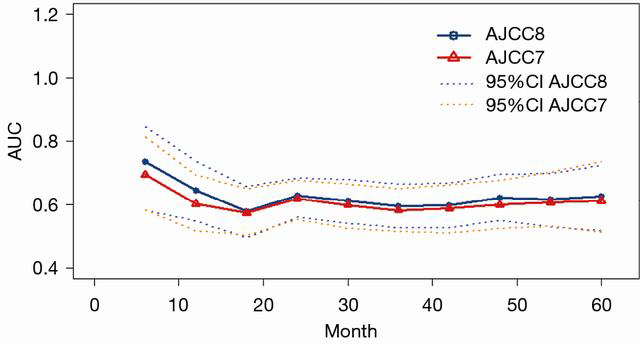 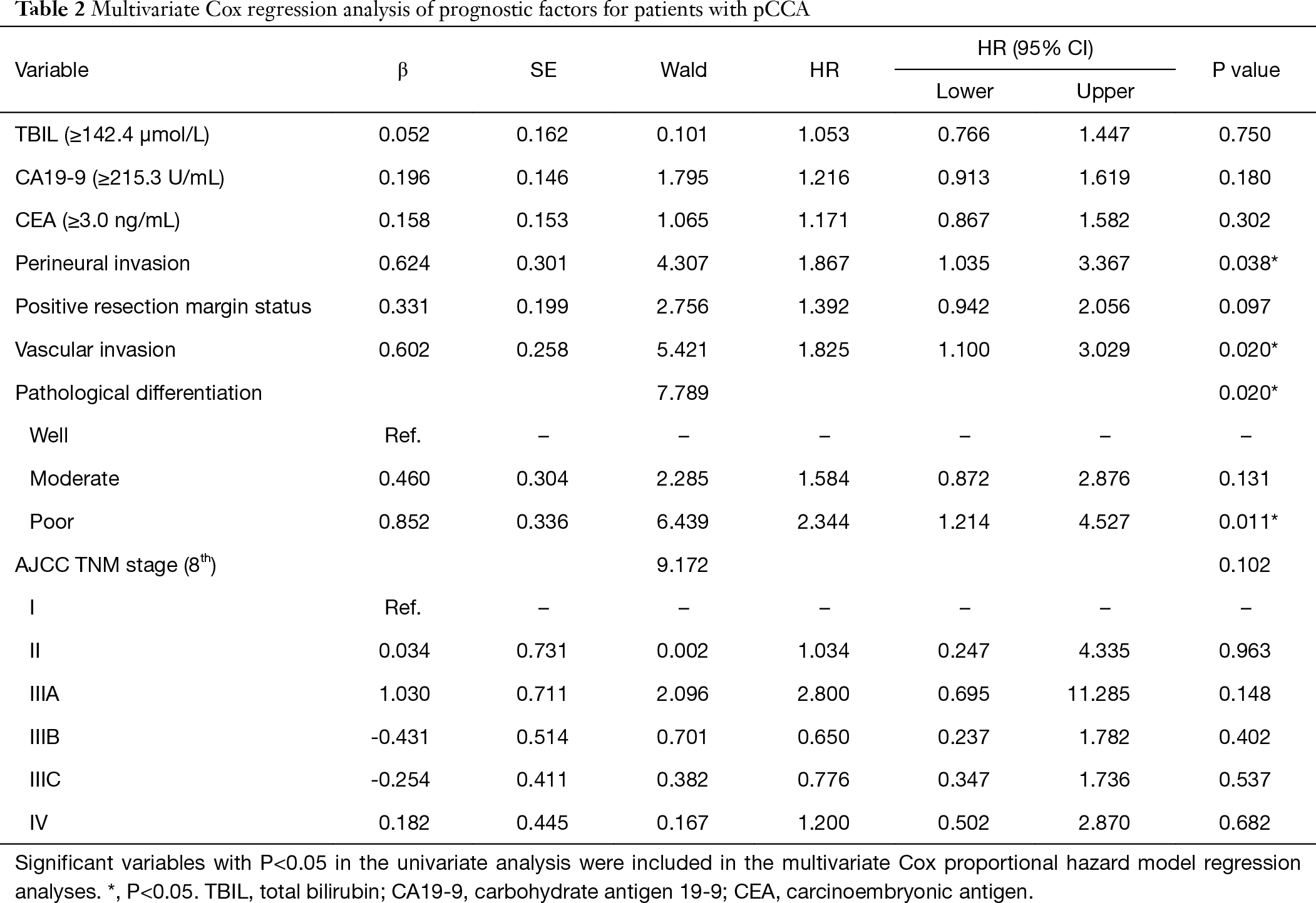 In the 8th edition, several changes were made to the T- and N-categories, which resulted in the reclassification of the distribution of T- and N-categories of pCCA. Invasion of the bilateral second order biliary radicals was excluded from the T4 category in the 8th edition. Although after changing of T categories, compared to patients in stage T1, patients with stages T3 and T4, but not T2a and T2b, tumors had an elevated risk of death in both the 7th and 8th editions. This result differed from that of the study conducted by Kwon et al. (28), who reported that when Bismuth-Corlette type IV was excluded from the T4 category, the discrimination of stages was greatly improved. This difference between the studies may have been caused by the small number of Bismuth-Corlette Type IV cases in our study. In another study, patients with stages T3 and T2b had an elevated risk of death compared to patients with stage T1; however, those with stages T2a and T4 did not (22), which may be due to the small cohort of patients with T2a and T4 cancer in this study. In current clinical practice, except for Bismuth type I, hemihepatectomy with an extrahepatic bile duct resection as well as resection of the caudate lobe is obligatory in most surgical plans (29). However, in the 7th and 8th editions of the AJCC staging system, both T2aN0M0 and T2bN0M0 were classified as TNM stage II. We did not find significant differences in OS between T2aN0M0 and T2bN0M0, which was consistent with the results of Ito et al. (30). However, the survival curves of T2a and T2b showed a significant difference in another study (28). The reason for this difference may be attributable to the confounding effect of lymph node metastasis and surgical technique on survival, which were excluded in our study. Based on the similarity in the survival of T2aN0M0 and T2bN0M0 in the current study, we merged T2a and T2b into T2, and found this to be helpful in distinguishing T2 from other adjacent subcategories. This is our proposal for simplification in the future.

After resection of pCCA, lymph node status is considered to be one of the most important prognostic predictors (31,32). In this study, we only demonstrated that the existence of metastatic LNs had a negative effect on survival, but could not distinguish the prognosis of N1 and N2 in neither the 7th nor the 8th edition. This result contrasted with that of the study by Lee et al. (23), who found that the difference between N1 and N2 was not significant in the 7th edition, but was statistically significant in the 8th edition. Another study found that patients with >3 positive LNs had significantly worse outcomes than those with ≤3 (33). However, we could not acquire this result in our study. Further demonstration of the effect of the new N category on survival in more centers is necessary in future studies.

In the present study, 46.9% of all patients changed overall stages based on the 8th AJCC TNM staging system, which is consistent with the findings of previous studies (22,23). The prognosis of patients with new stage IIIC was slightly better than that of stage IV patients but worse than that of stage IIIB patients. Therefore, the newly-established stage IIIC (8th) could reflect the poor prognosis of patients with metastatic LNs. In the 8th edition, differences between each stage became more obvious compared to the 7th edition, which could also reflect the rationality of this amendment. In addition to analyzing the changes between the 7th and 8th editions, we also investigated the prognostic factors associated with survival. In the multivariate survival analyses, pathological differentiation, vascular invasion, and perineural invasion were identified as independent predictors of poor survival after surgery in patients with pCCA. Vern-Gross et al. (34) demonstrated that lower tumor differentiation had a negative effect on survival. Our result was consistent with the findings of a meta-analysis (35) in which microvascular invasion, perineural invasion, and tumor differentiation were found to be significant prognostic factors.

The current study has several limitations that should be noted. Firstly, owing to the retrospective nature, our study might have a selection bias in terms of the patients’ diagnosis and treatment. Secondly, the effect of adjuvant therapy on OS is unclear. However, an association between adjuvant therapy and improved survival has been observed, with the effect limited to those with lymph node-positive disease (36). Due to the small population of patients that received adjuvant chemotherapy in this cohort, solid conclusions could not be drawn to depict the effect of adjuvant chemotherapy on survival. Thirdly, vascular resection was not lucubrated, and some researchers have noticed the effect of hepatic artery and portal vein resection on survival (37-39). However, this study was designed to explore AJCC categories. Furthermore, the present study was performed in a single institute and included 335 cases. Although this is one of the largest cohorts of patients with pCCA outside of the Surveillance, Epidemiology, and End Results (SEER) database, further multi-national and multi-institutional studies are required to derive more solid conclusions. Lastly, the cohort of this study involved patients who had undergone curative-intent resection, whereas most patients with pCCA had no opportunity to accept radical surgery at initial presentation. Further study is needed to include patients with both conservative treatment and surgical resection.

In summary, the modified T and N categories in the newly released 8th edition of the AJCC staging system for pCCA enhance the ability of this staging system to discriminate patient survival. Nevertheless, further simplification is still needed.

We thank A. Kassem and J. Reynolds from AME Editing Service for assisting language editing.

Reporting Checklist: The authors have completed the STROBE (Strengthening the Reporting of Observational studies in Epidemiology) reporting checklist. Available at http://dx.doi.org/10.21037/jgo-20-348

Conflicts of Interest: All authors have completed the International Committee of Medical Journal Editors (ICMJE) uniform disclosure form (available at http://dx.doi.org/10.21037/jgo-20-348). The authors have no conflicts of interest to declare.

Ethical Statement: The authors are accountable for all aspects of the work in ensuring that questions related to the accuracy or integrity of any part of the work are appropriately investigated and resolved. The study was conducted in accordance with the Declaration of Helsinki (as revised in 2013). The ethics committee of West China Hospital, Sichuan University, approved this analysis and waived the requirement for informed consent owing to its retrospective nature (No. 2019753).