Gastric cancer is a prevalent solid malignancy and leading cause of cancer-related mortality worldwide (1,2). Diet, infections, smoking, and obesity, especially in the presence of Helicobacter pylori, have all been implicated in facilitating the development of gastric cancer (3). Despite considerable advancements in diagnosis and treatments including surgery, chemotherapy, and radiotherapy, the prognosis of metastatic gastric cancer remains poor (4-6). Accordingly, it is necessary to discover novel clinically applicable molecular targets and more effective treatment strategies for gastric cancer.

Lipoteichoic acid (LTA) is a form of teichoic acid hydrophobically anchored to a glycolipid moiety of the plasma membrane. This molecule is an amphiphile in the cell wall of Gram-positive bacteria and is a highly immunogenic glycolipid. It has many similar pathophysiological properties with lipopolysaccharide in Gram-negative bacteria (16-18). In early research, LTA was shown to promote the production of proinflammatory agonists by leucocytes and played important roles in the pathophysiology of inflammation and postinfectious sequelae (19,20). However, more studies were needed to reveal the role of LTA in immune regulatory and cancer therapy. In UV-induced skin tumors, the oral administration of LTA suppressed tumor growth once UV radiation was discontinued (17) and melanogenesis in B16F10 mouse melanoma cells was inhibited by LTA which also inhibited the expression and cellular activity of tyrosinase (18). The combination of LTA and 5-FU showed potent antitumor effect by enhancing cell-mediated immunity (21). However, the effects of LTA on gastric cancer also remain unknown.

We proposed a combination therapy using LTA and miR-27b-3p agomir for treating gastric cancer. Our data showed that decreased expression of miR-27b-3p inhibited the viability of AGS cells by targeting vascular endothelial growth factor C (VEGFC) and inhibiting the AKT pathway. Furthermore, LTA suppressed the viability of gastric cancer cells via regulating the NF-κB pathway. Importantly, our data showed that the combined use of LTA and miR-27b-3p agomir had a synergistic anti-gastric cancer effect in vitro and in vivo. Our study showed the role of miR-27b-3p on VEGFC and p65 for the first time in GC by synergistic effect with LTA. These results provide a new information to support that miR-27b-3p/VEGFC might be helpful on aiding the development of novel therapeutic strategies.

We present the following article in accordance with the ARRIVE reporting checklist (available at http://dx.doi.org/10.21037/jgo-21-12).

Wells were established and each contained 3,000 cells which were seeded, exposed to the indicated treatment, then repeatedly washed with fresh media. A 20 µL of solution of MTT (Sigma-Aldrich, USA) was then added into each well for 4 h incubation at 37 °C and 5% CO2. Absorbance at 570 nm was measured by using a microplate reader (Thermo Fisher, Finland).

RNATrizol (Invitrogen) was used to extract total RNA from cells following the protocols. mRNA was reverse transcribed into cDNA by Prime ScriptTM RT reagent Kit with gDNA Eraser (Takara, Japan). miRNA was reverse transcribed into cDNA using Mir-X miRNA First-Strand Synthesis Kit (Takara, Japan). SYBR® Green (BioRad Laboratories Inc., USA) was used for qRT-PCR analysis. The thermal cycles for qRT-PCR were listed as follows: 95 °C for 5 min, 40 cycles of 95 °C for 15 s and 60 °C for 50 s, 95 °C for 15 s, 60 °C for 15 s and 95 °C for 15 s. Each reaction was performed in a technical triplicate. The relative expressions of mRNA and miRNA were normalized to GAPDH and U6, respectively. The comparative cycle threshold method and fold change was used to calculate the relative expression. The primer used is showed in Table 1. 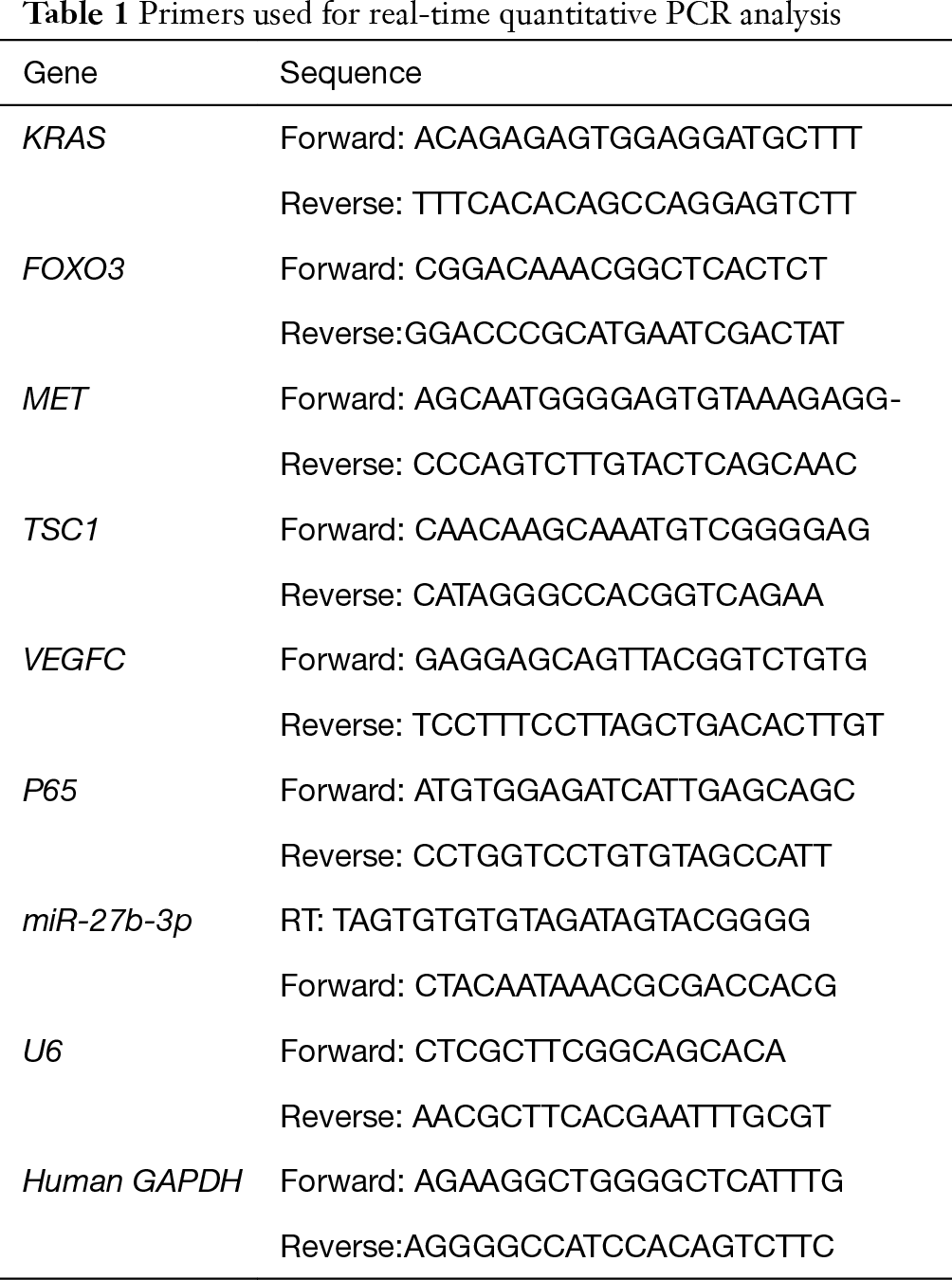 Cells were homogenized in ice-cold lysis buffer. After being centrifuged for 5 min at 10,000 g, 15 µg protein was subjected to 10% SDS-PAGE and transferred onto PVDF membranes. The membranes were then blocked and incubated with respective primary antibodies: anti VEGFC (abcam 1:1,000), phosphorylated-AKT (p-AKT) (sigma, 1:1,500), AKT (CST, 1:1,000), P65 (abcam, 1:1,000) and GAPDH (abcam, 1:2,000). After washing, the membranes were incubated with anti-rabbit IgG-HRP (CST, 1:2,000). Bands were visualized with the enhanced chemiluminescent system (Thermo Fisher Scientific, Inc., USA). Three independent repeats of experiments were performed. The density of each band was measured using ImageJ software (National Institutes of Health, USA). GAPDH from the same sample was internal loading control.

Male Balb/c nude mice (3–4 weeks, 20–25 g) were purchased from the Animal Center of Southern Medical University. Experiments were performed under a project license (NO.: IEC2020011600012) granted by Ethics Committee of the Dongguan Third People’s Hospital, in compliance with Dongguan Third People’s Hospital guidelines for the care and use of animals. All animal experiments were conducted at the Experimental Animal Center of Southern Medical University.

After treatment, cells were fixed in 4% paraformaldehyde and permeabilized with 0.5% Triton X-100 for 15 min. The cells were washed and blocked with 5% NGS (normal goat serum) in PBS and incubated with primary antibody overnight at 4 oC. We used P65 (1:500 Santa, USA) as the primary antibody and a secondary antibody conjugated with Alexa Fluorescence 549 (1:1,000, Invitrogen) was also used. The stained cells were visualized by a confocal microscope (OLYMPUS, Japan).

The apoptosis of cells was evaluated using a Hoechst detection kit (Roche, Germany) following the manufacturer’s instructions. In brief, the cells were fixed with 3% formaldehyde, permeabilized with 0.1% Triton X-100, and incubated with Hoechst reaction mixture. The cell nucleus was then labelled with DAPI.

All experiments were performed at least three times and P<0.05 was considered statistically significant. To determine significance between two groups, an unpaired t-test was performed and Kruskal-Wallis test was used to evaluate the differences between more than two groups using Prism statistical software package (Version 8.0, Graphpad Software Inc., CA, USA). 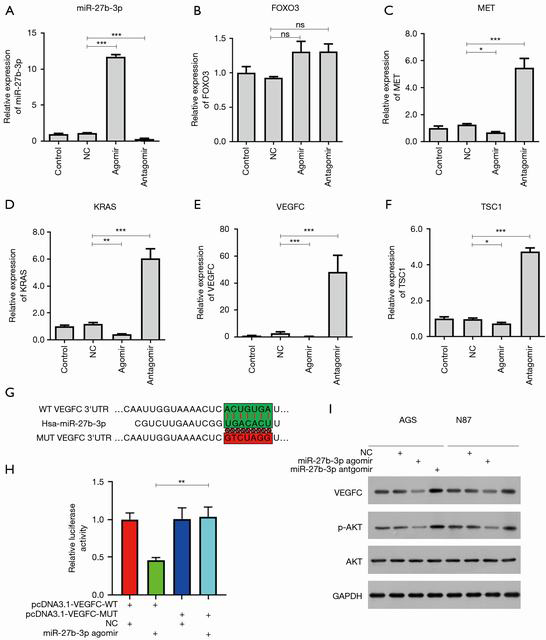 To investigate whether LTA inhibited the proliferation of gastric cancer cells, the AGS cells were treated with LTA. The molecular structure of LTA is shown in Figure 3A. As shown in Figure 3B, cell viability was significantly inhibited by LTA after 3 days of treatment. Previous studies reported that LTA can activate NF-κB through the recognition of TLR2 and reactive oxygen species in LTA-induced murine macrophages (26). The protein level of P65 in AGS cells was significantly decreased by LTA treatment (Figure 3C) and immunofluorescence assay showed that the level of P65 in both the cytoplasm and nucleus of AGS cells was also decreased by LTA treatment (Figure 3D). Our results indicated that the proliferation of gastric cancer cells was suppressed by LTA through inhibition of the NF-κB pathway. 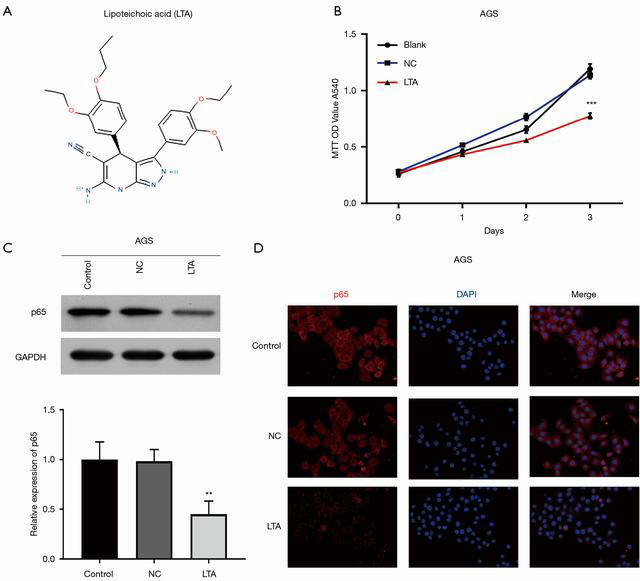 Figure 3 Lipoteichoic acid (LTA) suppressed the proliferation of gastric cancer cells by inhibiting the NF-kappa-B pathway (A) The molecular structure of LTA. (B) AGS cells were treated with LTA (4 µmol/L) for 1, 2 and 3 days. MTT assessed the cell viability. (C) Western blot analyzed the protein level of GAPDH and P65 at 3 days after LTA stimulation. (D) The level of P65 in both the cytoplasm and nucleus of AGS cells was visualized by immunofluorescence assay at 3 days after LTA stimulation. DAPI was used to stain nucleus (blue). All the experiments were carried out in triplicate. **P<0.01, ***P<0.001. 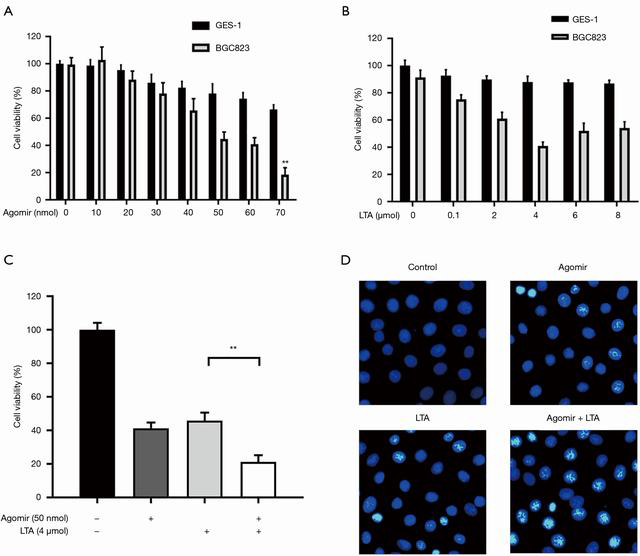 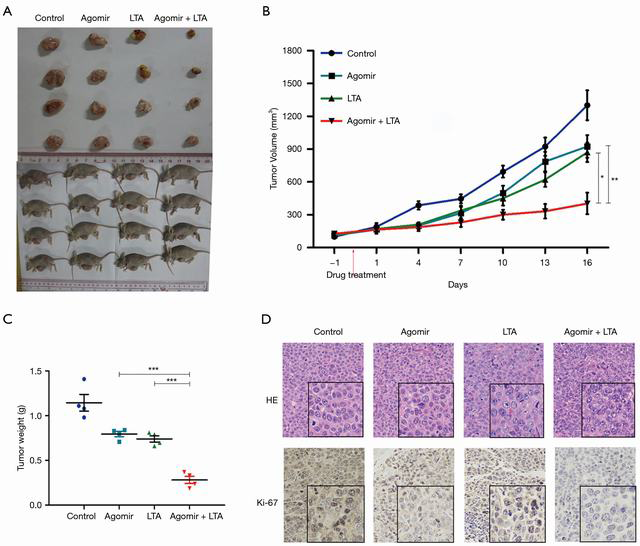 Figure 5 Combined use of lipoteichoic acid (LTA) and miR-27b-3p agomir has synergistic effect for anti-gastric cancer in vivo. Subcutaneous xenografts were established in nude mice, which were treated with miR-27b-3p agomir, LTA or together as indicated (n=4 per group). (A) The photos of tumor and mice are shown. The growth of tumor (B) was recorded and weight (C) is shown. (D) Hematoxylin-eosin staining of tumor tissues and Ki-67 immunohistochemistry analysis in xenograft tumor tissues were performed. ×400. All the experiments were carried out in triplicate. Magnification, 100×. *P<0.05, **P<0.01, ***P<0.001.

As a potent lymphangiogenic factor, VEGFC has been shown to be pivotal for lymph angiogenesis (27,28). Angiogenic VEGFC is expressed in endothelial cells, non-endothelial cell types, like cancer cells (8,29) and VEGFC was found to be highly expressed in various tumors including gastric carcinoma (28-30). In gastric carcinoma, the overexpression of VEGFC was associated with advanced regional lymph node infiltration and both poor disease-free and overall survival (30). The production of VEGFC was also induced by conventional or targeted radio- and chemo-therapy (31,32). VEGFC stimulated proliferation by promoting the phosphorylation of PI3K-AKT in spermatogonia GC-1 cells (33) and in N87 cells, the expression of VEGFC and VEGFD was significantly decreased by inhibition of p-Akt and p-mTOR pathways (23). Xiang et al. also reported that the expression of VEGFC was regulated by the PI3K/Akt pathway in colorectal cancer cells (28). Our results showed that decreased levels of VEGFC inhibited the phosphorylation of PI3K-AKT. We speculate that the decreased phosphorylation of PI3K-AKT will reduce the expression of VEGFC.

Previous studies have mainly demonstrated the immune regulatory effects of LTA and less attention has been paid to its preventive antitumor effect. LTA has been shown to inhibit melanogenesis in B16F10 mice (18) and its oral administration suppressed the growth of established skin tumors (17). However, LTA was also found to enhance the proliferation and metabolic activity of human non-small-cell lung cancer cells in vitro by activation of inflammatory signaling (34). Our data showed that LTA suppressed the proliferation of gastric cancer cells via regulating the NF-κB pathway. We suspect that this inconsistency in results may be due to differences in tumor cell types and the concentrations of LTA used in each experiment.

The NF-κB pathway supports cell survival and the acquisition of chemo resistance in gastric cancer (35-37). In LTA-induced murine macrophages, LTA was reported to activate NF-κB through the recognition of TLR2 and reactive oxygen species (26), and in LTA-induced endometritis mice, LTA promoted the activation of TLR2 and NF-κB (38). Immunofluorescence assay showed that the protein level of P65 in both the cytoplasm and nucleus of AGS cells was significantly decreased by treatment with LTA. Given the different cell types used and the disease being studied, more cancer cell lines might be explored in subsequent experiments. Different concentrations of LTA used to treat cancer cells might also be used.

MiR-27b-3p agomir showed a potent inhibition of tumor growth, and a synergistic inhibitory effect of miR-27b-3p agomir and LTA on gastric cancer was seen. Nowadays, miRNA agomir and miRNA inhibitors are considered promising therapeutics in the treatment of some cancers. However, the number of miRNA therapeutics progressing into clinical development is small because obstacles encountered in developing efficient delivery systems (39). The combination of miRNA therapeutics and other drugs is an intuitive strategy (40). However, drug candidates for miRNA therapeutics are also under investigation and their synergistic inhibitory effect needs to be explored.

Reporting Checklist: The authors have completed the ARRIVE reporting checklist. Available at http://dx.doi.org/10.21037/jgo-21-12

Conflicts of Interest: All authors have completed the ICMJE uniform disclosure form (available at http://dx.doi.org/10.21037/jgo-21-12). The authors have no conflicts of interest to declare.

Ethical Statement: The authors are accountable for all aspects of the work in ensuring that questions related to the accuracy or integrity of any part of the work are appropriately investigated and resolved. Experiments were performed under a project license (NO.: IEC2020011600012) granted by Ethics Committee of the Dongguan Third People’s Hospital, in compliance with Dongguan Third People’s Hospital guidelines for the care and use of animals.