The liver is a common organ for metastatic disease involvement in many solid malignancies including gastrointestinal, breast, and lung cancer. Among patients with colorectal cancer (CRC), approximately 50% will develop metastatic disease to the liver (1,2). Aggressive local treatment to these lesions can increase survival in certain scenarios. In patients with oligometastatic disease to the liver, there is even a possibility of long-term disease control. Hepatic resection is the standard of care in these situations with five-year survival rates generally around 25–45% (3-7). There is also data on surgical resection of liver metastases in patients with non-CRC primaries (8-10). Unfortunately, a majority of patients are not candidate for resection (11). Therefore, safe and effective treatments for metastatic hepatic disease are an important clinical need.

Other local therapy options for patients that develop liver metastases include radiofrequency ablation (RFA), cryotherapy, transarterial chemoembolization (TACE), yttrium-90 (Y90), and stereotactic body radiation therapy (SBRT). High rates of local control (LC) of hepatic disease appears to be a key determinant of overall survival (OS) (3,5,10,12,13). For example, Aloia et al. showed RFA was associated with a seven-fold increased risk of local failure and three-fold increased risk of death compared to resection despite similar rates of intrahepatic and extrahepatic failure among patients with solitary hepatic disease from CRC (13). A recent meta-analysis demonstrated superior LC for SBRT compared to RFA in the treatment of liver metastases (14). Along with good LC, the ideal treatment would also be associated with minimal morbidity. SBRT has been shown to be safe in dose escalation studies (15-18) with excellent control rates above 90% with biologically effective doses (BED) >100 Gy10 (19). Rusthoven et al. reported a 2-year LC rate of 94% for 38 lesions treated with 60 Gy in 3 fractions, with a 2-year LC rate of 100% for lesions 3 cm or less (16). SBRT also has the advantage over other local therapies of being non-invasive.

Proton therapy’s unique characteristics of the Bragg peak and a lack of exit dose can potentially provide additional benefits for Proton SBRT treatment of liver metastases. Multiple studies illustrate a dosimetric advantage of proton therapy compared to photon-based therapy in liver radiotherapy resulting in higher volumes of liver irradiation with photon therapy (20-22). Subsequent courses of treatment may be limited by prior liver radiation exposure with photon therapy. Proton SBRT limits the integral dose to the liver making subsequent courses of treatment more feasible. Joo et al. reported a 59% out-of-field recurrence rate in the liver for these patients showing the high probability of additional courses of liver directed therapy (23). Proton-based radiation treatment to the liver has also been shown to be safe in patients with hepatocellular carcinoma (HCC), who most often have underlying cirrhosis (24-26). Only one phase II Proton SBRT liver metastases study is published to date showing lower rates of LC compared to contemporary series (27). However, the authors note that this is likely related to a lower BED. A phase I dose escalation trial showed Proton SBRT to be safe and well tolerated with the maximal tolerated dose not reached at a dose of 60 GyE (Gray equivalent) (28).

In this study we analyzed all patients that were treated with Proton SBRT for liver metastases at our institution in the initial five years. The primary objective was to identify the LC rate of Proton SBRT in patients with metastatic liver disease. Secondary objectives include evaluation of OS and toxicity. We present the following article in accordance with the Strengthening the Reporting of Observational studies in Epidemiology (STROBE) reporting checklist. (available at: http://dx.doi.org/10.21037/jgo-20-424).

A retrospective analysis was completed of all 46 patients with 81 liver metastases that were treated at our institution between September 2012 and December 2017. The fractionation regimens, LC rates, OS, and toxicity were evaluated. Potential bias was reduced by analyzing every patient that was treated for liver metastases over this time period.

LC was defined according to Response Evaluation Criteria in Solid Tumors (RECIST) guidelines (version 1.1) (32). OS was assessed as the time period between completion of the last treatment and either death by any cause, or censored at last known follow up. The Kaplan-Meier method was used to estimate LC and OS. Statistical analysis was completed using Python (33).

Acute toxicity was graded according to Common Terminology Criteria for Adverse Events (CTCAE) version 4.0. Specific factors of interest included evaluation for radiation-induced liver disease (RILD). RILD is a clinical syndrome of anicteric ascites, hepatomegaly, and elevation of alkaline phosphatase (ALP) relative to other transaminases that may occur 2 weeks to 3 months following radiation to the liver. Grade 3 ALP (>5 times the upper limit of normal) with ascites not due to cancer progression was considered RILD. Other evaluated toxicity included toxicity to any related organ system within 90 days from the start of treatment.

Patients were planned to be evaluated once during the treatment course, at 4 weeks after treatment, and at 3 months after treatment. Evaluation included physical examination, laboratory values, follow-up imaging (starting at 3 months), and a detailed account of possible symptoms. Any observed toxicity within 90 days of treatment was recorded as acute toxicity. Regular follow-up was planned to continue at 3-month intervals to evaluate treatment response. In cases of missing follow-up data, patients were censored when last known to be alive.

The study was conducted in accordance with the Declaration of Helsinki (as revised in 2013). The study was approved by the Institutional Review Board (IRB) of Loma Linda University Health (IRB#5200383) and informed consent was taken from all the patients.

Forty-six patients with 81 total lesions were treated with Proton SBRT. Patient characteristics are listed in Table 1. The median age was 65.5 years old (range, 33–86 years). The median follow up was 15 months (range, 1–54 months). Half of the patients were male (n=23) and half were female (n=23) and 87% of patients had an Eastern Cooperative Oncology Group (ECOG) score of 0. The primary site of disease was colorectal in 50.0% of cases. Extrahepatic disease was present in 43.5% of patients with 19.6% receiving some sort of prior local therapy to the liver before Proton SBRT. Two or more lesions were treated in 56.5% of patients, with one patient receiving treatment to a total of five lesions. The median size of the GTV was 2.5 cm (range, 0.7–8.9 cm) with a median volume of 4.07 cc (range, 0.23–125.58 cc). A majority of patients (89.1%) underwent 4DCT for immobilization. 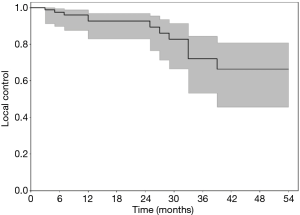 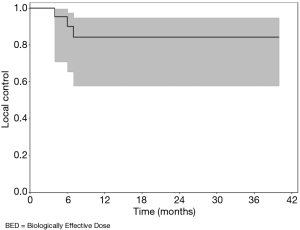 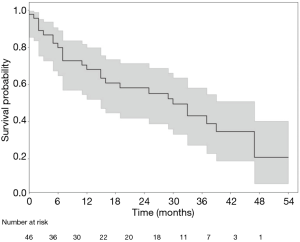 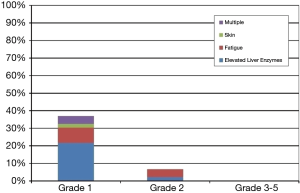 In this study, we report the results of our 5-year institutional experience treating liver metastases with Proton SBRT. The 2-year LC for all 81 lesions treated was 92.5%. There was no grade 3 or higher toxicity and no incidences of RILD.

The LC was high despite a large number of patients treated with a low BED. A 2-year LC of 90.4% for 37 lesions treated with a BED ≤60 was unexpected. Smaller tumor size in this cohort (median 1.8 cm) is a possible contributor. It is also possible that a lower BED can delay the disease progression, but may not lead to a durable response, as the 3-year LC rate dropped to 64.7%. The 2-year LC rate was 84.0% for 13 lesions treated with a BED ≥100. The lower LC compared to the lower BED cohort may be explained by two large lesions that had early local failure. Liver metastases greater than 5 cm are typically excluded from most SBRT protocols. The curve remains flat after these early failures suggesting a durable response for the other lesions treated with a high BED.

LC, the primary end point in this study, was similar to photon-based SBRT as expected (16,19). However, the main advantage of Proton SBRT is the reduced integral liver dose providing the option of safely delivering multiple courses of treatment. When patients are considered for hepatic resection, the limit for safe resection is generally 20–30% of remnant liver (34). The median percentage of liver that received no radiation dose from our data was 59.9%, despite a majority of patients receiving two or more courses of treatment. This is significant as the out-of-field recurrence rate in the liver can be high (23). Therefore, preserving the possibility for additional courses of SBRT in the future is a major benefit of Proton SBRT.

The MS was 30 months, which is high considering almost half of patients had extrahepatic disease. This partially reflects the efficacy of systemic treatment. In general, patients were considered for Proton SBRT to new or progressing liver metastases if the extrahepatic disease was stable on systemic treatment. The 4-year OS was 20.1% and eight patients were still alive at the time of this analysis. Since LC of liver metastases appears to be associated with OS (3,5,10,12,13), SBRT offers the possibility of long-term survival in some patients with oligometastatic disease even if they are not candidates for hepatic resection.

Proton SBRT appears to be safe with no patients experiencing grade 3 or higher toxicity or RILD. This is significant considering 56.5% of patients completed treatment to two or more liver metastases. Routine use of DIBH for those who can tolerate it, as opposed to 4DCT, can further reduce integral liver dose, potentially increasing the benefit of Proton SBRT even further.

Our phase I dose escalation study established the safety of the 60 GyE in 3 fraction dose regimen (28). This is the preferred regimen for treatment now as long as there are no dose-limiting adjacent structures. For lesions adjacent to chest wall or rib, we use 50 GyE in 5 fractions to reduce the risk of chest wall pain or rib fracture (35). We use 30 GyE in 5 fractions in patients that have liver metastasis near stomach or bowel. However, an alternative local treatment modality should be considered, if possible, as durable LC is expected to be low in these situations.

The limitations of this study include the common limitations that apply to any observational study. All patients treated with Proton SBRT for liver metastases over this time period were analyzed to reduce selection bias. However, patients that received Proton SBRT for liver metastases were likely carefully selected by the referring provider based on performance status and ability to tolerate treatment. These results are likely not generalizable to all patients with liver metastases, especially patients with poor performance status or inadequate hepatic reserve.

In conclusion, Proton SBRT has high LC rates with an excellent toxicity profile for treatment of liver metastases even when a majority of patients received multiple courses of treatment. We continue to accrue patients for our Phase II study treating liver metastases with Proton SBRT to 60 GyE in 3 fractions.

Sandra C. Teichman for her assistance in the IRB approval process.

Reporting Checklist: The authors have completed the STROBE reporting checklist. Available at: http://dx.doi.org/10.21037/jgo-20-424

Conflicts of Interest: All authors have completed the ICMJE uniform disclosure form (available at: http://dx.doi.org/10.21037/jgo-20-424). The authors have no conflicts of interest to declare.

Ethical Statement: The authors are accountable for all aspects of the work in ensuring that questions related to the accuracy or integrity of any part of the work are appropriately investigated and resolved. The study was conducted in accordance with the Declaration of Helsinki (as revised in 2013). The study was approved by the Institutional Review Board (IRB) of Loma Linda University Health (IRB#5200383) and informed consent was taken from all the patients.