Gastric cancer (GC) is a common and life-threatening malignant tumor of the digestive system with a high incidence in China. Most patients are in the middle or advanced stage of the disease when they commence treatment and the 5-year survival rate is only 20–50% (1), placing GC as the second highest mortality cancer in the world. The molecular mechanisms underpinning the occurrence and development of GC are complex and the role played by immune escape and the design of therapies to address it are of increasing interest (2). The use of immune checkpoint inhibitors in particular has become the focus of tumor immunotherapy in recent years.

Programmed death 1 (PD-1) is an important immunosuppressive molecule that regulates tumor growth, prevents excessive inflammatory responses, and maintains the survival of transplanted donors. The ligand of PD-1, programmed death ligand-1 (PD-L1/B7-H1), is widely expressed in various types of tumor and immune cells (3), and has the effect of immune surveillance (4). PD-L1 is expressed in the anti-tumor T cell response of various solid tumors including renal cell carcinoma and breast, pancreatic, colorectal, and esophageal cancer (5,6). It inhibits the proliferation and activity of T cells and plays a significant role in the negative regulation of the immune response (7). In addition, PD-L1 expression is associated with poor prognosis in patients with various malignant solid tumors including GC (8,9) and is valuable in predicting prognosis and clinicopathological characteristics and as a biomarker in the tumor microenvironment (10-12). Its targeted immunoregulation is of great significance in the treatment of infection, tumors and autoimmune diseases, and the corresponding antibodies have the same effect (13). At present, there are many studies on the clinicopathological and prognostic significance of PD-L1 expression in GC, but the results are not consistent. We performed a meta-analysis to clarify the correlation of PD-L1 expression with clinicopathology and prognosis in GC.

We present the following article in accordance with the PRISMA reporting checklist (available at http://dx.doi.org/10.21037/jgo-20-568).

We searched the PubMed, ScienceNet, EMbase, CNKI, and Wanfang databases for publications appearing between January 2010 and April 2020 using the key terms PD-L1, PD-1, programmed death cell 1, programmed death 1 ligand, and gastric cancer or GC. The literature was collected by the combination of subject words and free words according to the characteristics of different databases.

The following inclusion criteria were used: (I) all patients were pathologically diagnosed with GC; (II) PD-L1 expression was obtained by immunohistochemical (IHC) method; (III) the relationship between PD-L1 expression and the prognosis of GC was clarified; (IV) all GC patients had been followed up and the results were reported; (V) treatises, not reviews, case reports, conference abstract, and others were included; (VI) articles contained complete research data; (VII) the full text was in English; (VIII) the Newcastle-Ottawa Quality Assessment Scale (NOS) score was ≥6 points.

The following data were extracted: name of the first author, year of publication, country, total cases, survival rate, number of PD-L1 positive cases, number of PD-L1 negative cases, tumor stage, and presence of lymph node metastasis. If a clear survival report was not available, the Kaplan-Meier curve was read for survival information through Engauge Digitizer 4.1.

The quality of the articles was evaluated by NOS, with the highest score being 9. A score ≥6 was rated as high quality.

Meta-analysis was performed by Stata15.0 software (StataCorp., College Station, TX). The data were analyzed by hazard ratio (HR), odds ratio (OR), and 95% confidence interval (CI). Heterogeneity between studies was judged with I2 and Q tests. If there was no heterogeneity (P>0.10, I2<50%), the fixed effect model (FEM) was used for analysis and the random effect model (REM) then used for analysis. Sensitivity analysis was performed to evaluate the stability of the results by eliminating the study results one by one, that is, removing the effect of each study on the overall results to explore the source of heterogeneity. Publication bias was analyzed by funnel plot.

A total of 761 related studies were obtained and after reading the title, abstract and full text, 704 articles were excluded. A further 42 articles with other intervention measures and low quality but without a control group were also excluded. Finally, 15 articles (14-28) were included in the meta-analysis, with a total of 3,218 patients. The screening procedure is shown in Figure 1. 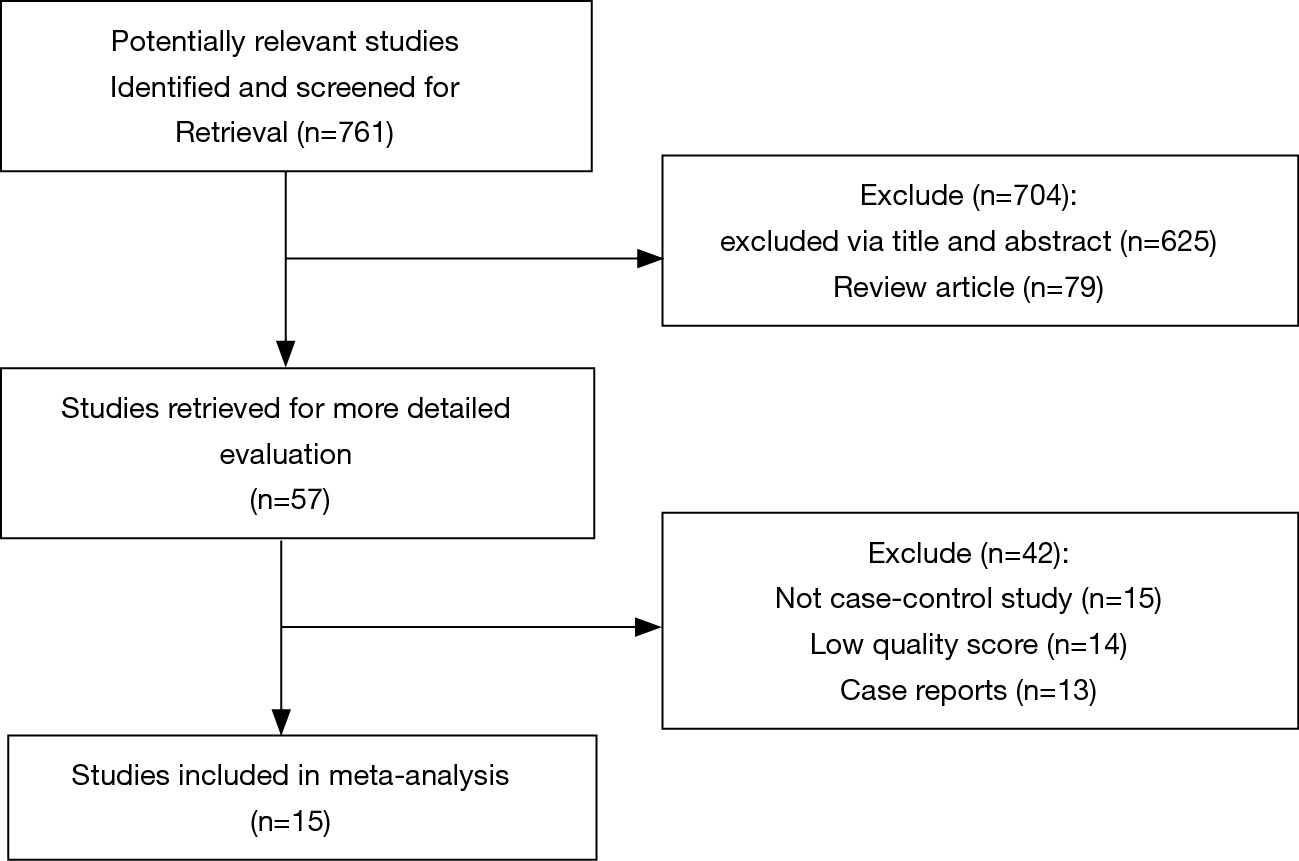 Basic research characteristics of the 15 included studies are shown in Table 1. The NOS score ranged from 7 to 8, indicating that all were high-quality studies. 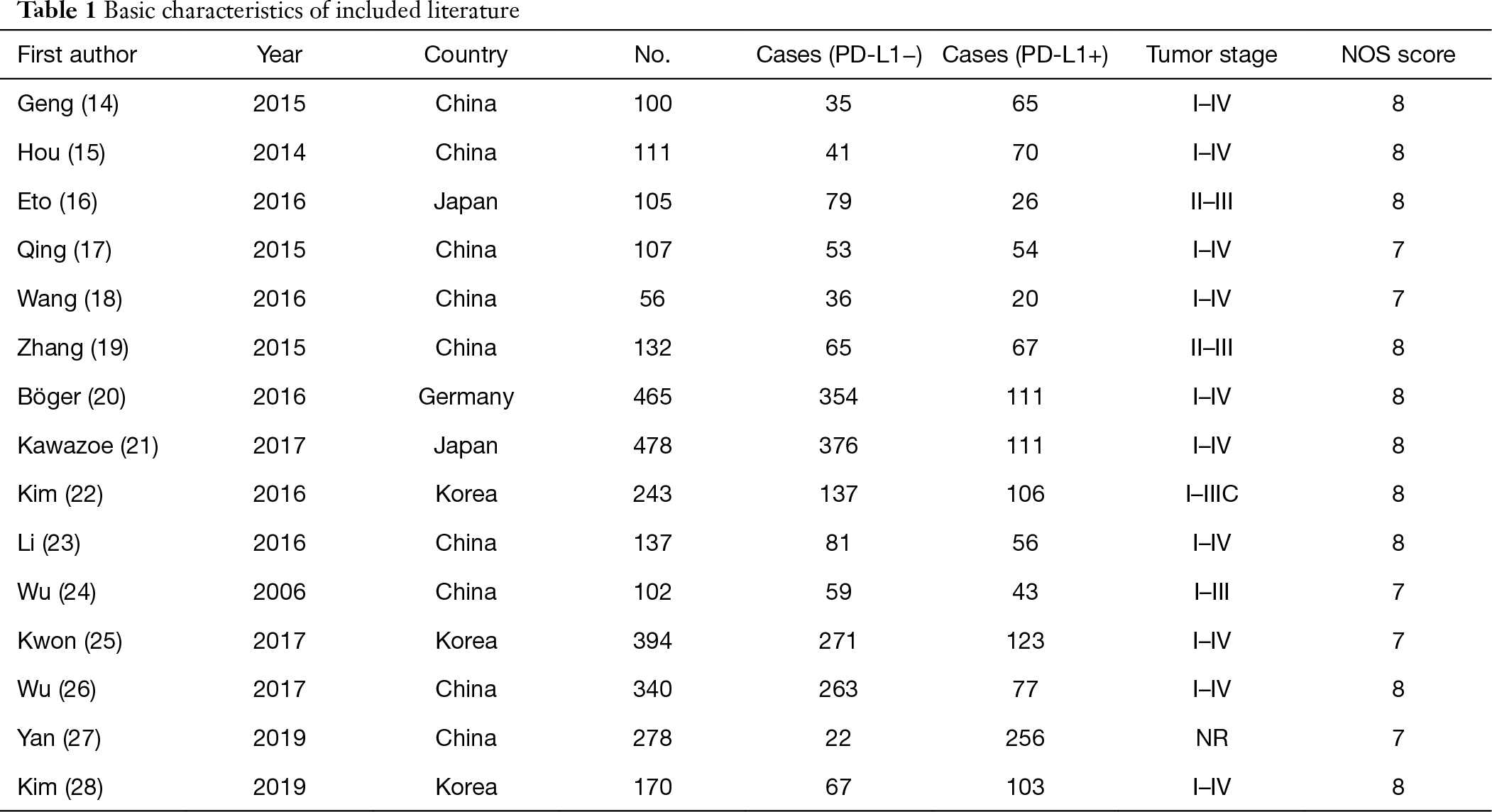 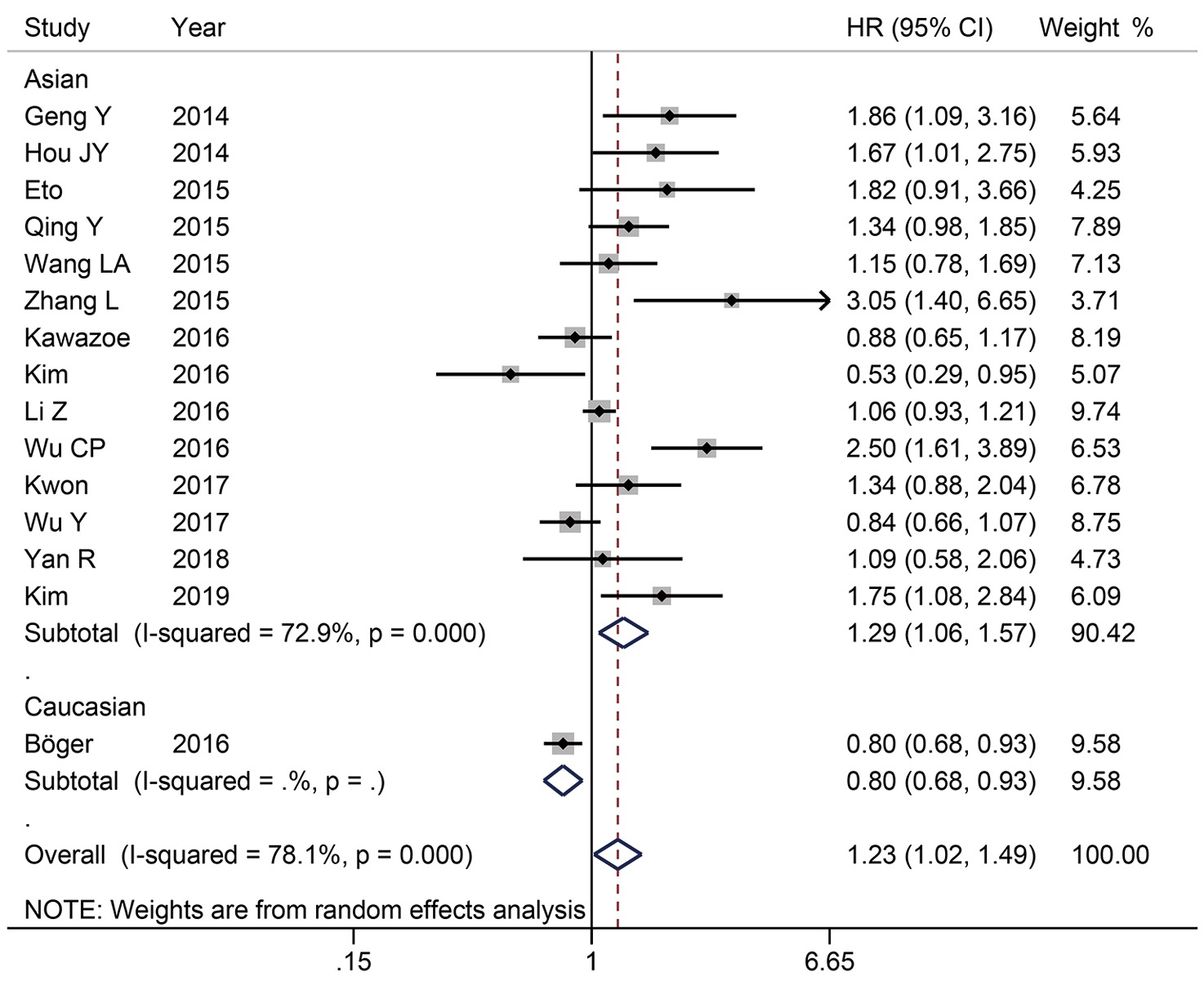 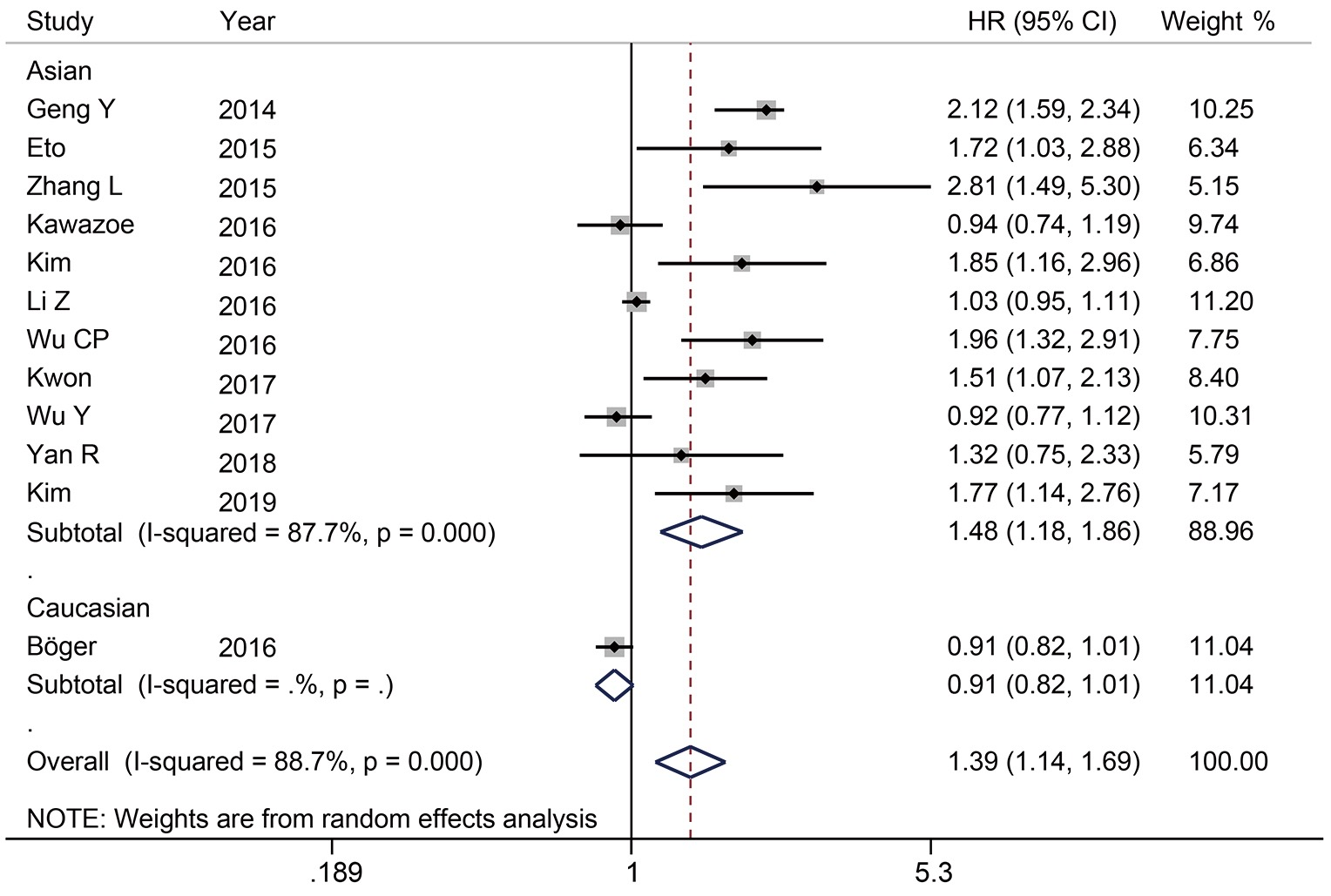 Relationship between PD-L1 expression and clinicopathological characteristics in GC patients

To further understand the role of PD-L1 as a biomarker, we investigated the relationship between PD-L1 expression and the clinicopathological features of GC using REM. The correlation between PD-L1 expression and lymphatic metastasis was reported in 12 studies (14,16,19-28) and there was significant heterogeneity among them (I2=73.9%, P<0.001). The positive expression of PD-L1 in the group with lymph node metastasis was 1.73 times higher than that in the group without lymph node metastasis, and the difference was statistically significant (OR =1.73, 95% CI: 1.18–2.54, P<0.01) (Figure 4A). The result showed that patients with higher expressions of PD-L1 are more prone to lymph node metastasis. 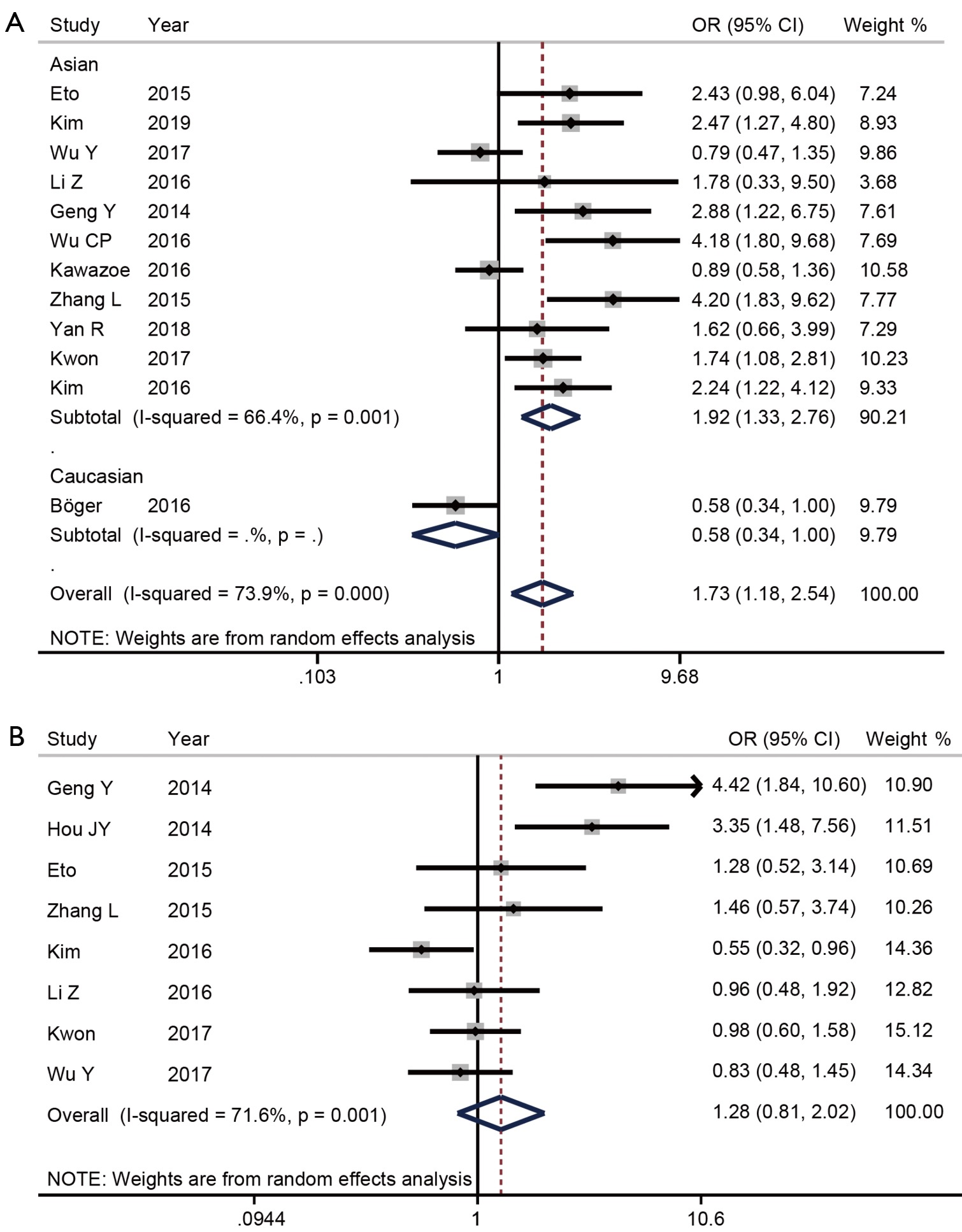 An increasing number of studies show that PD-L1 is highly expressed in a variety of malignant tumors and can be used as a marker in tumor prognosis. However, its relationship with survival in GC patients remains controversial. Statistical analysis of the 15 articles and 3,218 patients assessed in this study showed that the 3- and 5-year overall survival rates of patients with positive expression of PD-L1 were significantly lower than those in whom it was negatively expressed. The positive expression of PD-L1 was more common in patients with positive lymphatic metastasis but had no correlation with tumor stage. Therefore, PD-L1 expression can be used as a reliable indicator for monitoring the clinical prognosis of GC patients.

Studies have shown that PD-L1 is barely expressed in normal gastric tissues, while its expression level is significantly up-regulated in GC tissues (29). In the tumor microenvironment, overexpression of PD-L1 can produce immunosuppressive effects (30) and promote the immune escape of tumor cells. Blocking this signal pathway can induce T cells to activate and kill tumor cells, enhancing the endogenous anti-tumor effect to provide a new approach to the treatment of GC (31). Consistent with the results of this study, many others have shown that patients with high PD-L1 expression have a poor 5-year overall survival rate, indicating PD-L1 is closely related to prognosis (32-34). While a variety of PD-L1 monoclonal antibodies have been applied in the clinical treatment of cancer patients with good clinical efficacy (35,36) there remain few clinical studies on PD-L1 monoclonal antibodies in GC patients. The present study shows that PD-L1 is more common in GC patients with lymph node metastasis, which may provide a theoretical basis for its use in evaluating the prognosis of GC.

There are several limitations to this study. Firstly, the number of publications in the meta-analysis is small. Secondly, although subgroup analysis was performed, only one publication concerned Caucasian groups. Finally, the heterogeneity of the results is large, which is caused by many factors including technical deviation due to test methods and operators. Larger, multicenter prospective cohort studies of the predictive role of PD-L1 expression in GC are needed to verify our results.

In summary, we found that the high expression of PD-L1 decreases 3- and 5-year survival rates and promotes lymph node metastasis in GC patients although this was not related to tumor stage. PD-L1 is a negative factor in GC prognosis, and whether it can be used as prognostic factor in GC requires verification through high-quality prospective studies with uniform criteria. Further studies on the mechanism of PD-L1 overexpression in GC will also provide more reliable evidence for individualized treatment of GC.

Reporting Checklist: The authors have completed the PRISMA reporting checklist. Available at http://dx.doi.org/10.21037/jgo-20-568

Conflicts of Interest: Both authors have completed the ICMJE uniform disclosure form (available at http://dx.doi.org/10.21037/jgo-20-568). The authors have no conflicts of interest to declare.