Duodenal subepithelial lesions (D-SELs) are mostly asymptomatic lesions that are incidentally detected during endoscopic examinations. Most D-SELs are benign, including Brunner’s gland hyperplasia, lipomas, and ectopic pancreases; however, some are malignant or have malignant tendencies, such as neuroendocrine neoplasms (NENs) and gastrointestinal stromal tumors (GISTs) (1). The initial management of SELs depends on the accurate diagnosis and evaluation of the malignant potential of the lesions. Biopsy samples are obtained with difficulty due to the subepithelial location of the lesions. Endoscopic ultrasonography (EUS) is the most helpful imaging technique for evaluating SELs. EUS-guided fine-needle aspiration can be beneficial in some cases (2,3). However, the final diagnosis can only be obtained by performing tumor resection (4).

There is controversy regarding the optimal treatment strategy for D-SELs. Surgery, including limited resection and pancreaticoduodenectomy, is invasive, expensive, and involves a high risk of severe complications, such as hemorrhage, pancreatic fistula, and intra-abdominal infection (5). With the recent rapid development of endoscopic techniques and devices, endoscopic resection (ER) has become an alternative method of diagnosing and treating D-SELs. The main ER types are endoscopic mucosal resection (EMR), endoscopic submucosal dissection (ESD), endoscopic submucosal excavation (ESE), and endoscopic full-thickness resection (EFTR) (6-8). However, ER for D-SELs remains challenging and is associated with a high incidence of complications because of the narrow cavity, thin wall, and large vascular network of the duodenum. Only a few studies on the efficacy and safety of ER for the treatment of duodenal lesions are available, and these studies rarely focused on D-SELs. Therefore, we aimed to perform a retrospective study of 49 patients with SELs in the duodenum to evaluate the efficacy and safety of ER for the treatment of D-SELs (6,7,9).

We present the following article in accordance with the STROBE reporting checklist. Available at http://dx.doi.org/10.21037/jgo-20-301.

We retrospectively analyzed the clinical data of patients with D-SELs who underwent ER at the Second Xiangya Hospital between August 2010 and September 2019 (Figure 1). All D-SELs included in this study originated from the submucosal or muscularis propria (MP) layer, as ascertained by EUS (U-ME1 or A75; Olympus, Tokyo, Japan) before the procedure. The indications for ER were as follows: (I) D-SELs suspected or confirmed to be potentially malignant tumors with no risk of metastases by preoperative EUS, abdominal computed tomography (CT), and/or histopathology; (II) symptomatic SELs; (III) SELs increasing rapidly in size during the follow-up period; or (IV) a strong desire to undergo ER. The exclusion criteria were as follows: (I) signs of metastases or invasion outside the duodenum; (II) imaging features indicating high risk, such as poorly defined margins and heterogeneity; (III) periampullary lesions; (IV) inability to tolerate the procedure; and (V) severe coagulation disorders. Written informed consent was obtained from the patients before endoscopic treatment. The study was conducted in accordance with the Declaration of Helsinki (as revised in 2013). The study protocol was approved by the Ethics Review Board of the Second Xiangya Hospital (No. LYF2020129).

Thirty-six (73.5%) ER procedures were performed with patients under general anesthesia, while 13 (26.5%) were performed with patients under conscious sedation. ER was performed with a single-channel endoscope (GIF-Q260J; Olympus) with an attached transparent cap (D-201-11802; Olympus). Other equipment included an argon plasma coagulation unit (APC300; ERBE; Tübingen, Germany), a high-frequency generator (ICC 200, ICC 300, or VIO 200D; ERBE), a carbon dioxide insufflator (UCR; Olympus), an injection needle (NM-4L-1; Olympus), hot biopsy forceps (FD-1U-1; Olympus), a dual knife (KD-650Q; Olympus), an insulation-tip knife (KD-611L; Olympus), and hemostatic clips (HX-600-90; Olympus). During EMR, a solution (100 mL normal saline, 1 mL indigo carmine, and 1 mL epinephrine) was injected into the submucosal layer. Subsequently, the lesion was resected using a snare. For ESD (Figure 2) and ESE, dots were marked around the lesion using a dual knife (KD-650Q; Olympus), followed by administration of a submucosal injection. After precutting the mucosa and submucosa, the tumor was dissected (ESD) or excavated as deep as the MP layer around the lesion (ESE) using a dual knife or insulation-tip knife. Thereafter, the mucosal defect was closed using metal clips or an endoloop combined with metal clips, as necessary. The EFTR procedure was performed as reported previously (10) (Figure 3). All resected specimens were embedded in paraffin and then sectioned for pathological assessment. 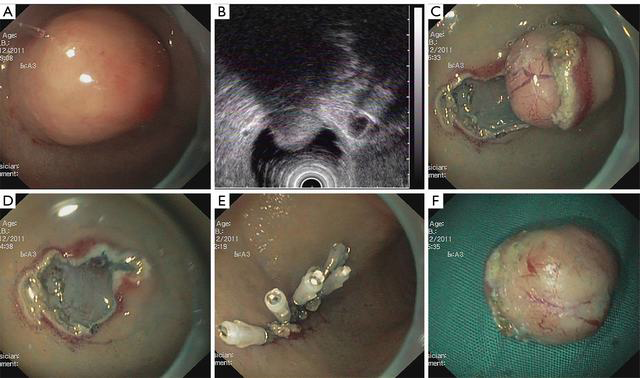 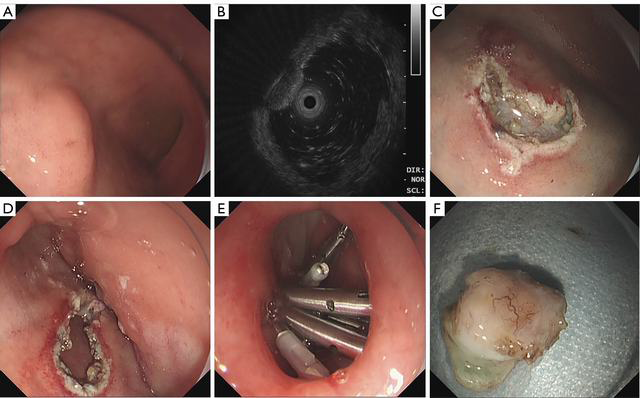 Surveillance endoscopy or EUS with or without CT was performed at 1, 6, and 12 months postoperatively and annually thereafter to observe wound healing and check for residual tumors and metastases. Patients lost to follow-up were excluded when calculating the follow-up parameters such as recurrence rate, follow-up duration, etc.

SPSS 23.0 software (SPSS Inc., Chicago, IL, USA) was used for statistical analyses. The categorical variables were represented as frequencies and analyzed using the chi-square test or Fisher’s exact test. The continuous variables were expressed as mean ± standard deviation or median and range and calculated using the Student’s t-test or Mann-Whitney U test; P<0.05 was considered statistically significant.

Characteristics of patients and SELs 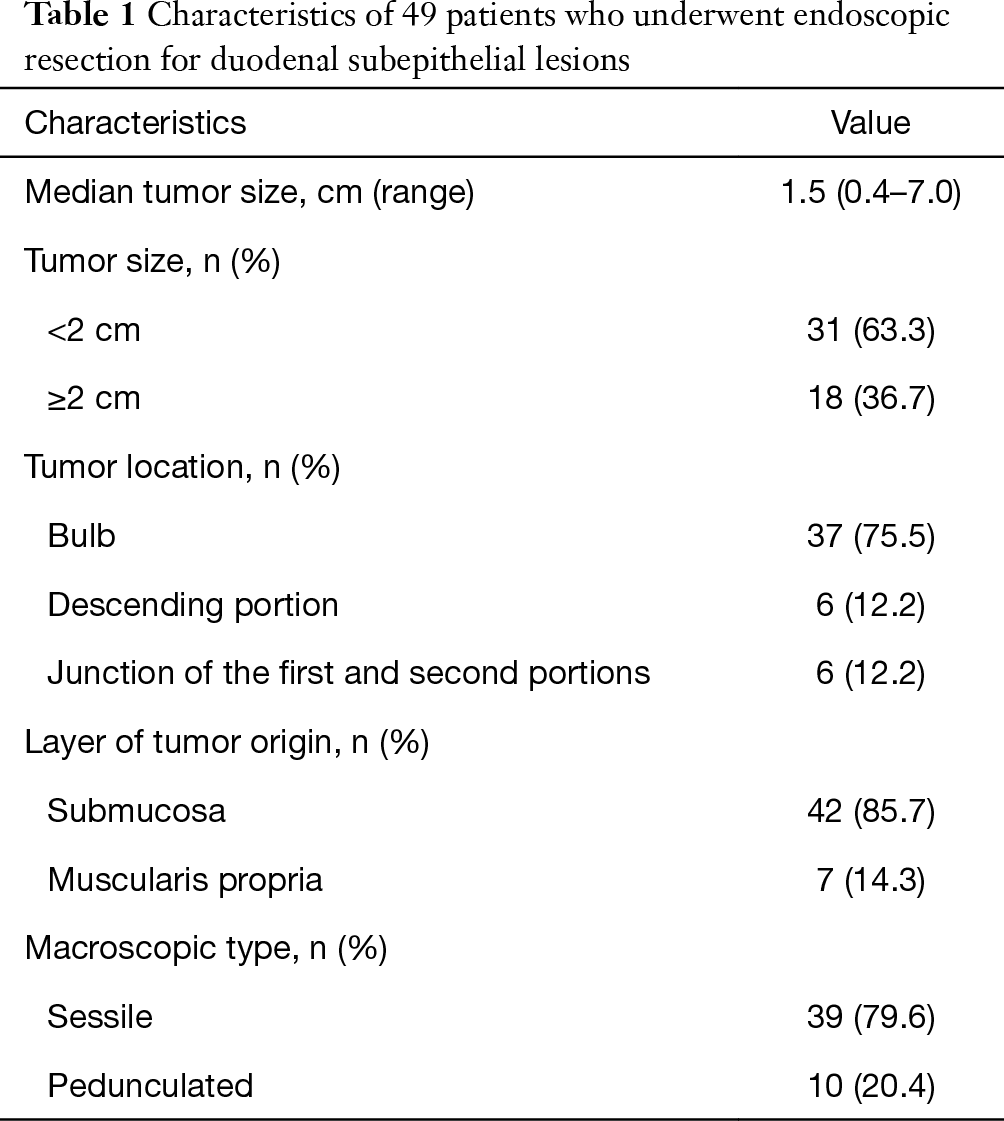 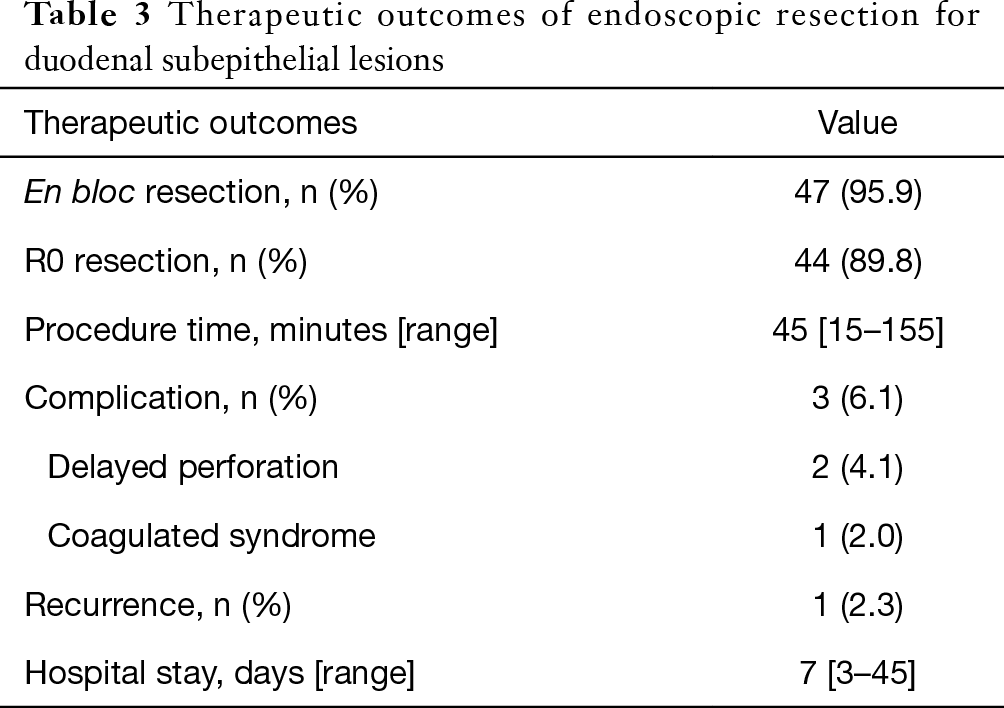 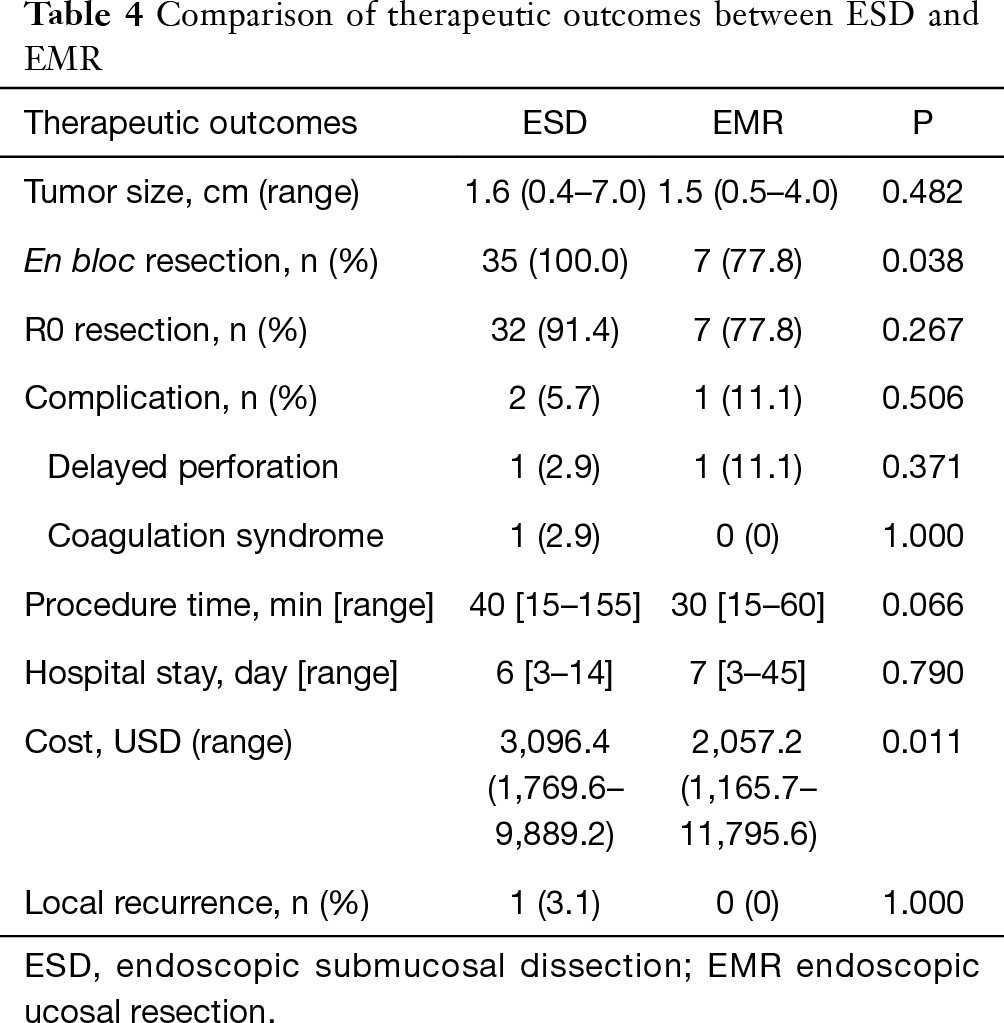 Two (4.1%) patients, one with a 1.5-cm lipoma resected by EMR and the other with a 2.0-cm NET (G2) resected by ESD, developed delayed perforation; both tumors arising from the submucosa. Both patients recovered after open surgical closure of duodenal perforation. Coagulation syndrome occurred in 1 (2.0%) patient who underwent ESD; however, the patient recovered conservatively. Delayed bleeding, gas-related complications, or duodenal stricture was not observed in our study.

Of 49 patients, four were lost to follow-up and one with a G2 NET underwent additional surgery because of tumor infiltration to the MP layer. Follow-up data were available for 44 (89.8%) patients. The median follow-up period was 24 months (range, 1–88 months). One (2.3%) case of tumor recurrence was noted in a patient with Brunner’s gland hyperplasia at 42 months after ESD. The recurring tumor was resected using laparoscopic local resection. The two cases of GISTs were followed-up for 10 and 47 months, respectively, without recurrence. The patient who underwent R0 resection of a neuroendocrine carcinoma refused to undergo additional treatment; no recurrence occurred after 8 months of follow-up.

Bleeding and perforation are the most common complications of ER. Delayed perforation developed in 2 patients in this study, resulting in a perforation rate of 4.1%, which was consistent with previous studies (6,7,16,17). The reported incidence of bleeding for duodenal ER ranges from 0% to 14.9% (6,7,14,17), and no delayed bleeding was observed in this study.

The indications for different ER methods for the treatment of D-SELs have not been standardized to date. The selection of ER methods is associated with the lesion features, such as macroscopic type, size, origin, growth pattern, and so on, which are ascertained by preoperative evaluation, including white light endoscopy, EUS, and/or CT. At our center, EMR is suitable for small (<2 cm), intraluminally growing SELs arising from the muscularis mucosa or superficial submucosa that can be removed in one piece using a snare. When lesions with intraluminal growth are confined to the deep submucosa or superficial MP layer, or cannot be resected in one piece by a snare (>2 cm), ESD is preferred. If SELs arise from the deep MP layer, then ESE is recommended. EFTR is optimal for SELs growing extraluminally or those that are tightly connected to the serosa.

All duodenal NENs have a potential for malignancy (18). ER is recommended for duodenal NENs that are ≤1 cm in size, non-ampullary, confined to the submucosal layer, and do not present with lymph node or distant metastasis (19). Eight NENs with an average diameter of 1.1±0.5 cm (range, 0.5–2.0 cm) were included in this study. All lesions were located in the bulb, originated from the submucosa, and were resected by ESD. The R0 resection rate for ESD of NENs in the present study was low (62.5%, 5/8), which may be related to the insufficiency of EUS for defining the lesion type. The differential diagnoses for hypoechoic and heterogeneous lesions from the submucosal and MP layers may be broad, such as GISTs, leiomyomas, and NENs, and EUS-guided fine-needle aspiration may be useful for determining the malignant potential of these lesions to guide further management (2). Therefore, for D-SELs >1 cm in size that are suspected to be or confirmed as NENs preoperatively, therapeutic management should be selected with caution.

Although our study showed that ER was effective and safe and that the long-term prognosis associated with ER was good, there are several limitations of this study. First, bias may potentially be present mainly because of the single-center retrospective design and relatively small sample size. Second, all procedures were performed by experienced endoscopists at a tertiary hospital; therefore, the results cannot be directly generalized. Third, a small number of EFTR and ESE procedures were performed owing to the endoscopist’s concerns regarding perforation or bleeding during the selection of the management strategy. Due to these limitations, the results of our study should be interpreted carefully.

In summary, ER is an effective, safe, and minimally invasive method for the histopathologic assessment and curative treatment of D-SELs originating from the submucosal or MP layer and can serve as a promising alternative treatment for D-SELs. Its en bloc resection rate and R0 resection rate are high, and its recurrence rate and complication rate are low. Therefore, large-scale, randomized, controlled, and multicenter studies are warranted to confirm the efficacy and safety of ER for D-SELs.

We would like to thank the pathologists form our hospital for the critical pathological diagnosis.

Reporting Checklist: The authors have completed the STROBE reporting checklist. Available at http://dx.doi.org/10.21037/jgo-20-301

Conflicts of Interest: All authors have completed the ICMJE uniform disclosure form (Available at http://dx.doi.org/10.21037/jgo-20-301). The authors have no conflicts of interest to declare.

Ethical Statement: The authors are accountable for all aspects of the work in ensuring that questions related to the accuracy or integrity of any part of the work are appropriately investigated and resolved. Written informed consent was obtained from the patients before endoscopic treatment. The study was conducted in accordance with the Declaration of Helsinki (as revised in 2013). The study protocol was approved by the Ethics Review Board of the Second Xiangya Hospital (No. LYF2020129).