In the operation of rectal cancer, the level of ligation of the inferior mesenteric artery (IMA) has received extensive attention from surgeons. Mile believed that rectal lymphatic drainage is from the bottom to the IMA and was the one who first proposed IMA low ligation (LL), which entails complete ligation of the blood vessels below the branching of the left colic artery (LCA) (2,3). On the other hand, Moynihan proposed high ligation (HL) of the IMA, from the level of the abdominal aorta to the blood vessels at the root of the IMA, in order to clear the 253 lymph nodes (regional lymph nodes at the root of IMA) located in the area (2,3).

Some scholars support HL of the IMA because they believed that this method can significantly increase the extent and number of lymph nodes dissected. For this purpose, laparoscopic operation can easily separate the colon and the spleen in order to decrease the risk of hematogenous tumor spread and to quickly find the correct anatomical gap to complete a total mesorectal excision (TME) (4-7). Although IMA HL can extend the lymph node dissection to include all 253 lymph nodes, other scholars support IMA LL, because the presence of metastases to 253 lymph nodes decreases the possibility of radical resection and cannot improve the prognosis, and HL may lead to insufficient anastomotic blood supply and serious complications (8,9).

In the textbook of Colon and Rectal Surgery, the American Society of Colon and Rectal Surgeons recommended LL, because HL can decrease the blood supply to the sigmoid colon; however, HL was recommended for patients who require additional vascular mobilization for the proximal colon, in order to avoid excessive tension on an anastomosis, with a consideration of the presence of metastatic nodes around the IMA (10). Japanese scholars believe that the lymph nodes around the IMA should be routinely cleaned. In fact, in Japan, D3 lymph node dissection for rectal cancer has become the standard procedure and D2 lymph node dissection is only used for tumors confined to the muscular layer and those that do not have lymph node metastasis found before surgery (11). Huang et al. showed HL and D3 lymph node dissection can be safely performed using the da Vinci robotic surgical system (12). Moreover, some surgeons routinely perform LL and D2 lymph node dissection which was proven an oncologically acceptable treatment strategy by Maeda et al. (13).

We present the following article in accordance with the STROBE reporting checklist (available at http://dx.doi.org/10.21037/jgo-20-327).

This study retrospectively analyzed 253 patients who underwent anterior resection for rectal cancer at our hospital from March 2014 to August 2018 (Figure 1). The inclusion criteria were age >18 years, enteroscopy biopsy-confirmed malignancy, absence of distant metastasis on preoperative imaging assessment, American Society of Anesthesiologists (ASA) score I–III, body mass index (BMI) <30 kg/m2, and complete medical records. The exclusion criteria were IMA root lymphadenopathy on the preoperative images; previous history of malignant tumors, abdominal aortic surgery, or arteriosclerosis of the IMA and its branch; and emergency surgery for intestinal obstruction, perforation, bleeding, etc. The primary and metastatic lesions were treated simultaneously in stage IV patients (surgical resection or radiofrequency ablation). The study was conducted in accordance with the Declaration of Helsinki (as revised in 2013). The TNM staging was in accordance with the American Joint Committee on Cancer colorectal cancer TNM staging system (eighth edition, 2017). The study was approved by the Ethics Committee of Chinese People’s Liberation Army General Hospital (No. S2020-467-01). Because of the retrospective nature of the research, the requirement for informed consent was waived.

Figure 1 The flowchart of patient selection.

The surgeons were the deputy chief physicians of our hospital. In the LLD2 group, the abdominal cavity was routinely explored for the presence of distant metastasis and to identify tumor location and serosal penetration; the LCA was separated and retained, the IMA under the LCA was ligated and cut off [IMA changing to superior rectal artery (SRA) after LCA]. We identified the root of IMA for the confirmation of lymph node status through preoperative imaging and intraoperative exploration in LLD2 group. Complete anterior resection of the rectal cancer was performed according to the TME principle. In the LLD3 group, dissection of the 253 lymph nodes distributed along the IMA, from the its beginning to the beginning of the LCA, was performed; the other steps were the same as those for LLD2. In the HL group, the anterior space of the Toldt’s fascia to the root of the IMA was freed, the blood vessels in the IMA were exposed, and the IMA was ligated at about 1 cm from the abdominal aorta; to complete the dissection of the 253 lymph nodes, the mesentery around the inferior mesenteric vein was freed and cut; the other steps were the same as those for LLD2.

The baseline data collected from the three groups included age, gender, and BMI; distance (cm) of the tumor from the anal verge; preoperative chemoradiotherapy (CRT); ASA score; and tumor maximum diameter, differentiation, histopathologic type, and pathologic TNM stage. The intraoperative and postoperative parameters were operative time, blood transfusion, conversion from laparoscopic to open surgery, complications, anastomotic leakage grade, and hospital stay. The parameters for the oncological quality of surgery included the total number of harvested lymph nodes, metastatic lymph nodes, number of lymph nodes, number of metastatic 253 lymph nodes, and R0 resection. Clinical pathological information was obtained through the electronic medical record system. The long-term outcomes included OS and DFS. The first recurrence mode and cause of death were compared among the groups. 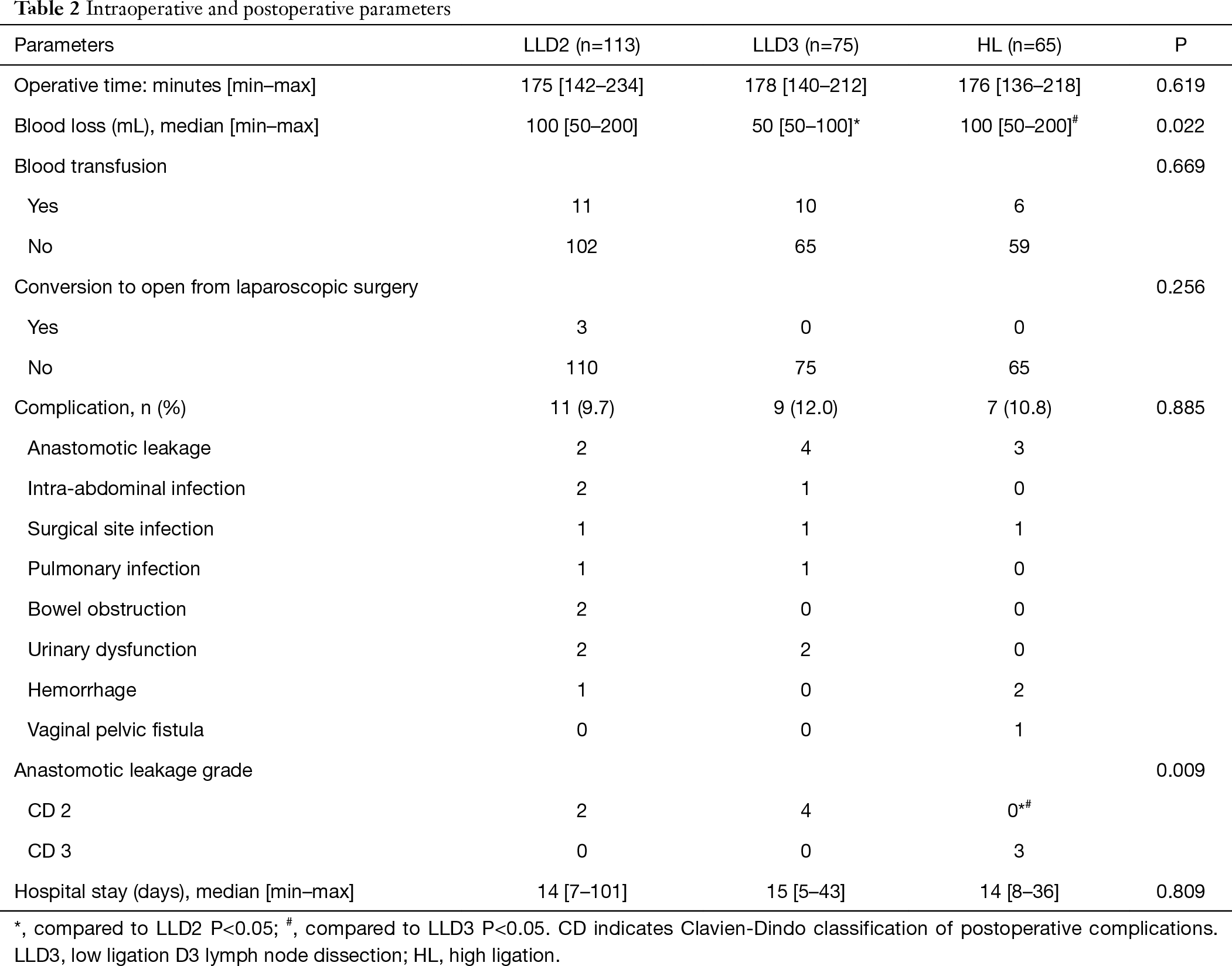 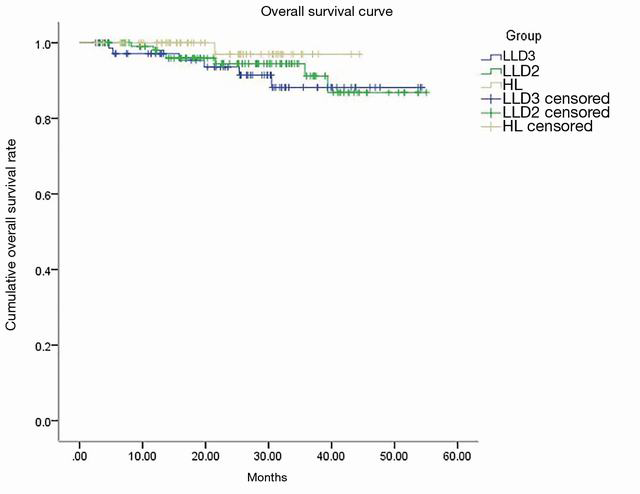 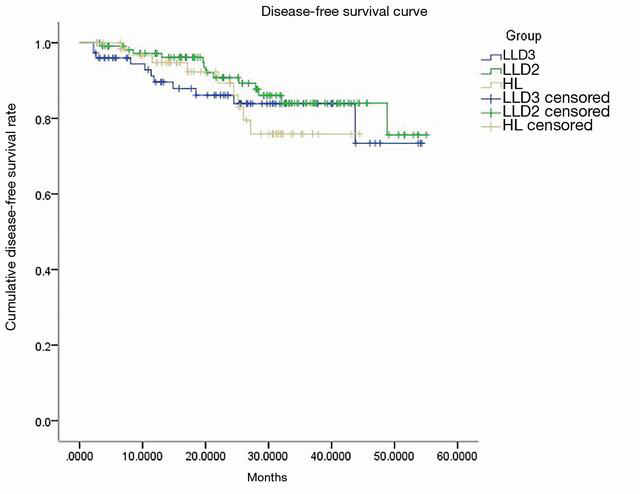 In 1982, Professor Heald proposed the concept of TME, which surgeons widely accepted and applied to the clinic and significantly improved the local recurrence and long-term survival of patients with rectal cancer (14,15). In the academic world of laparoscopic TME surgery, there are two opposing views on the site of IMA ligation, in particular, LL and HL. With the development of technology, more emphasis had been placed on IMA root lymph node dissection. The best IMA ligation level and the decision to clean the 253 lymph nodes or not are not well-documented. This study compared the short- and long-term effects of three different surgical methods LLD2, LLD3, and HL, in order to explore the best surgical procedure for anterior resection of rectal cancer.

Anastomotic leakage is a serious complication after rectal cancer surgery and is an important index for evaluating the short-term curative effect of radical resection of rectal cancer. Anastomotic leakage was reported to have an incidence of about 5% to 15% after low anterior resection for rectal cancer and had been closely related to anastomotic blood supply and anastomotic tension (16-18). The effects of the different IMA ligation levels on the short-term efficacy of radical surgery for rectal cancer are controversial. The anatomical types of IMA and its branches include types I to IV. In type I, the LCA is the first to branch off, and the sigmoid artery (SA) and SRA coexist; in type II, the IMA first branches into the common trunk of the LCA and SA; in type III, the LCA, SA, and SRA are separated at the same point; in type IV, there is no LCA (19). The Riolan’s arterial arch is an important collateral circulation of the IMA and superior mesenteric artery and was reported by Chinese scholars to be present in about 7.6% (20-22). Some studies have shown that LL has certain advantages on the short-term efficacy in some patients. One study that used laser Doppler flowmetry to confirm retention in the LCA and its ascending branch showed that increasing the perfusion of the anastomosis could theoretically reduce the incidence of anastomotic leakage (23). Other studies showed that IMA type III and absence of the Riolan’s arterial arch were independent risk factors for anastomotic leakage (19,24). Retrospective studies recommended IMA LL for patients with IMA type III and absence of the Riolan’s arterial arch, in order to reduce the incidence of postoperative anastomotic leakage (25). Trencheva et al. reported a prospective cohort study on 616 patients and showed that the incidence of anastomotic leakage increased with HL than with LL (P=0.0281) (26). Mari et al. conducted a multicenter randomized controlled trial (RCT) on 214 patients and reported better preservation of genitourinary functions (i.e., urinary symptoms, quality of life, sexual function) in the LL group (n=103) than in the HL group (n=111) at nine months postoperatively (P<0.05) (27).

Our study found no significant difference between LL (i.e., LLD2, LLD3) and HL in the incidence of anastomotic leakage, postoperative complication rates, and other major intraoperative and postoperative parameters, such as operative time, blood transfusion, conversion from laparoscopic to open surgery, and hospital stay. The median blood loss of LLD3 was significantly lower than that of LLD2 and HL, which might be related to the individual surgeons who performed LLD3 tending to pay more attention to the details of the operation. Theoretically, HL could free the sigmoid colon. Autopsy studies have shown that HL could result in a colonic intestine that was about 10 cm longer than that with LL (33). Buunen et al. found that a tension-free anastomosis was possible in 80% of patients who underwent LL (34). Another main factor for anastomotic leakage is anastomotic blood supply. In patients with Riolan’s arterial arch, the IMA and Riolan’s arterial arch can both supply blood to the intestine. A small or absent Riolan’s arterial arch can decrease colonic blood supply, which is an important cause of ischemic damage in the left colon. In HL, the LCA is not retained and the blood supply from the middle colic artery could only reach the splenic flexure of the colon; this leads to insufficient blood supply to the peripheral arteries of the colon distal to the splenic flexure and of the anastomotic region, thereby, leading to intestinal ischemia, which can cause anastomotic leakage and more severe complications, such as intestinal necrosis (35). In patients without a Riolan’s arterial arch, HL might reduce the blood supply to the distal colon, causing severe anastomotic leakage; our findings of significantly lower CD grade of anastomotic leakage after LL than after HL, but a similar grade between LLD2 and LLD3, might support this principle. However, multivariate logistic regression analysis revealed that ligation level was not an independent risk factor for anastomotic leakage.

Our study analyzed the short- and long-term effects of LLD2, LLD3, and HL. Urinary function and quality of life need to be further compared. This study was a single-center study with risk of bias; a multicenter research should to be carried out. Future studies need to explore the benefits of LCA retention in preventing anastomotic leakage in high-risk populations and D3 lymph node dissection for high-risk populations with 253 lymph node metastases.

Reporting Checklist: The authors have completed the STROBE reporting checklist. Available at http://dx.doi.org/10.21037/jgo-20-327

Conflicts of Interest: All authors have completed the ICMJE uniform disclosure form (available at http://dx.doi.org/10.21037/jgo-20-327). The authors have no conflicts of interest to declare.

Ethical Statement: The authors are accountable for all aspects of the work in ensuring that questions related to the accuracy or integrity of any part of the work are appropriately investigated and resolved. The study was conducted in accordance with the Declaration of Helsinki (as revised in 2013). The TNM staging was in accordance with the American Joint Committee on Cancer colorectal cancer TNM staging system (eighth edition, 2017). The study was approved by the Ethics Committee of Chinese People’s Liberation Army General Hospital (No. S2020-467-01). Because of the retrospective nature of the research, the requirement for informed consent was waived.