Sporadic colorectal cancer (sCRC) represents the second leading cause of cancer-related mortality in Europe, being responsible for 177,400 deaths in 2018 (1). Metastatic dissemination of the primary tumor is the major cause of death among sCRC patients. The most common locations of sCRC metastasis are liver, lung and peritoneum. Hematogenous and lymphatic spreading is a well-known mechanism of dissemination. Much less infrequent is the intraluminal shedding with distant intraluminal metastasis. In these cases, the genetic characterization of each of the tumor cell clones present in the primary tumor and in the metastases could help to establish the clonal relationship between them both. In this sense, interphase fluorescence in situ hybridization (iFISH) techniques, although it does not provide specific information about each chromosomal abnormality present in a tumor, with a suitable combination of probes, is used to obtain information about the genetic diversity of a tumor at the single-cell level.

We present the following case in accordance with the CARE reporting checklist (Available at http://dx.doi.org/10.21037/jgo-20-281).

After conventional histological studies, a cytogenetic profile of both tumors was performed. For this, a set of 7 different probes specific for those chromosomes and chromosomal regions most frequently gained/amplified and deleted in sCRC (2) were analyzed by iFISH techniques: 7q31 (D7S486), 7p11.1 (centromere), 8p22 (LPL), 8p11.1 (centromere) and 8q24 (CMYC), 13q14 (FOXO1) and 18q21 (BCL2); Vysis Inc, Chicago, IL, USA. FISH study displayed an identical genetic profile in both tumors, loss of the chromosomes 8 and 18q, and no alteration in chromosome 7 and 13q; consequently, a common clonal origin was suggested (Figure 3). 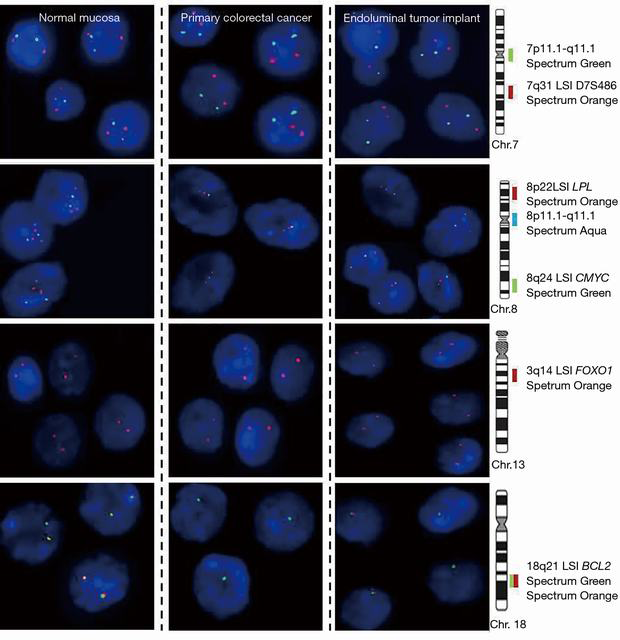 All procedures performed in studies involving human participants were in accordance with the ethical standards of the institutional and/or national research committee(s) and with the Helsinki Declaration (as revised in 2013). The study was reviewed and approved by the ethics committee of the University Hospital of Salamanca. The patient referred in the case report participant provided informed written consent.

Several studies have explored the cytogenetic alterations in sCRC, showing that gains/amplifications of chromosomes 7p, 8q, 13q and 20q together with losses of the 1p, 8p, and 17p chromosomal regions are frequent findings in these tumors (12). Although the metastatic tumor usually harbors more chromosomic abnormalities that of their paired primary tumor, it is well known that share highly similar karyotypic abnormalities. Many of these chromosomic abnormalities are acquired before the tumoral spreading (13,14). In our case, iFISH studies revealed that both tumors displayed loss of the chromosomes 8 and 18q without alteration of the chromosomes 7 and 13q. The former is an unusual finding, as Duijf et al. described loss of chromosome 8 in 0.96% of 520 sCRC tumors (15). Conversely, chromosomes 7 and 13q gains have been described in 30% in nonmetastatic disease and are significantly more frequent in metastatic tumors (P<0.05; 61% and 75%, respectively) (16). Those shared infrequent cytogenetic alterations among both tumors support the existence of a close genetic relationship between primary tumors and their intraluminal metastasis, suggesting a common clonal origin instead of synchronous sCRC. Given that some authors propose a more aggressive approach for synchronous sCRC—suggesting subtotal or total colectomy in that cases—differentiate between synchronous and metastatic tumors is important to choose the most adequate therapeutic option (17,18). The generalized use of iFISH techniques in pathology departments makes it a useful and accessible option in daily clinical practice to make an accurate diagnosis in these patients.

Conventional cytogenetics or Spectral Karyotyping (SKY) to define the chromosomal and molecular abnormalities of sCRC has important limitations, mainly related to the need for obtaining tumor metaphases, after an in vitro cell culture period (2); even more, when normal metaphases are obtained it is difficult to confirm that they correspond to the tumor cells and not to the normal cells present in the sample. These include the potential existence of clonal selection during cell culture, the analysis of a small fraction (typically ≤1%) of all the cells present in the tumor sample, and the difficulties in obtaining tumor cell metaphases in a significant proportion of cases. In addition, other molecular approaches such as array comparative genomic hybridization (aCGH) or single nucleotide polymorphism arrays (aSNPs) also has several limitations: the detection of gains or losses of genetic material present in the majority (e.g., more than 50%) of cells in the tumor sample from which DNA was extracted (12). These approaches do not provide detailed information about the clonal heterogeneity and genetic diversity of a given tumor and the potential co-existence of different abnormalities in the same tumor sample, particularly when tumor cell clones are present at relatively low frequencies (2). Conversely, iFISH techniques, with an adequate combination of probes, we can to obtain information about the genetic heterogeneity of a tumor at the single-cell level.

On the other hand, the mutation KRAS discordance observed between the primary tumor and the endoluminal implant may be explained by two mechanisms. The first hypothesis explains that it is a consequence of the divergent evolution of the tumors once the metastases are established. The presence of WT KRAS-metastasis with KRAS-mutated primary tumor has been reported in 3 of 99 cases (3%) by Santini et al. (19). and in 5 cases of 305 patients (2%) by Knijn et al. (20). Furthermore, Miranda et al. described a lower rate of mutated KRAS in lymph node metastasis than in primary tumor or visceral metastasis, suggesting that those colonizing neoplastic cells spread through lymphatics before KRAS mutation occurs (21). They hypothesize that native KRAS confers an advantage in the ability to migrate to lymph nodes. A similar mechanism may underlie in intraluminal metastasis; nevertheless, the data available is scant, and further research is necessary. The second possibility is that because of the primary tumor heterogeneity (a well-known circumstance in sCRC), tissue sampling has not included KRAS-mutated areas (22).

Reporting Checklist: The authors have completed the CARE reporting checklist. Available at http://dx.doi.org/10.21037/jgo-20-281

Conflicts of Interest: All authors have completed the ICMJE uniform disclosure form (available at http://dx.doi.org/10.21037/jgo-20-281). The authors have no conflicts of interest to declare.

Ethical Statement: The authors are accountable for all aspects of the work in ensuring that questions related to the accuracy or integrity of any part of the work are appropriately investigated and resolved. All procedures performed in studies involving human participants were in accordance with the ethical standards of the institutional and/or national research committee(s) and with the Helsinki Declaration (as revised in 2013). The study was reviewed and approved by the ethics committee of the University Hospital of Salamanca. The patient referred in the case report participant provided informed written consent