Surgery is the most effective treatment for early gastric cancer. For patients with advanced gastric cancer, especially those who have missed their chance for radical cure, mainly rely on chemotherapy, radiotherapy, and neoadjuvant chemoradiotherapy, among others. However, these treatments are nonspecific, with limited clinical efficacy and serious adverse events. Further, the long-term survival and prognosis of patients are not significantly improved as a result of such treatments (2). Targeted therapy is a hot spot in tumor combination therapy, which can not only improve clinical efficacy, but also minimize side effects. At present, several targeted therapeutic drugs have been approved for clinical use, and have been successfully used in the treatment of melanoma and non-small cell lung cancer (3). However, for gastric cancer, there is still a lack of effective therapeutic targets (4), and tumor recurrence and metastasis are still the main factors affecting the clinical prognoses of advanced gastric cancer patients (5).

Tight junction is a junction complex between epithelial and endothelial cells, which forms a material barrier around the cells, and plays an important role in cell polarity, permeability, adhesion, and regulation of cell proliferation and differentiation (6). The Claudins protein family is a human tight junction protein, whose function is to maintain the stability of epithelial cells (7). Studies have shown that Claudins are often down-regulated in cancer tissues, resulting in abnormal tight junction of cells, and decreased cell differentiation and polarity, which is closely related to the occurrence and development of tumors (8). Claudin-18 protein is a member of the Claudins protein family. A previous study showed that a monoclonal antibody against Claudin-18 combined with EOX (epirubicin + oxaliplatin + capecitabine) is feasible and safe in the treatment of patients with advanced or metastatic gastroesophageal cancer (9). However, the role of Claudin-18 in the development of gastric cancer is still unknown.

We present the following article in accordance with the REMARK reporting checklist (available at http://dx.doi.org/10.21037/jgo-20-463).

A total of 63 patients with gastric cancer, who were treated at our hospital from December 2012 to June 2013, were recruited as the research participants. Enrollment criteria included pathological confirmation of the specimens and no radiotherapy or chemotherapy before operation. The clinical stage was defined in accordance with the 7th edition of clinical staging standards.

All procedures performed in this study involving human participants were in accordance with the Declaration of Helsinki (as revised in 2013). The study was approved by the ethics committee of our hospital before implementation (No. IEC20200142). The participants gave their written informed consent before participation in the study.

The survival situation of patients was obtained by telephone interview.

The tissue wax was sliced by a slicer to a thickness of 5 µm. The flattened wax was fixed on the glass slide with adhesive to make paraffin sections. The paraffin slices were roasted for 90 min (70 °C), and dewaxing was conducted twice in xylene, 10 min each time; 100%, 95%, and 85% alcohol were successively passed through the cylinder for 5 min each time; the slides were washed with natural water until the they were clear. In order to block endogenous peroxidase, slides were immersed in 3% hydrogen peroxide for 8 min; washed 3 times in distilled water, added to a temporary citrate buffer solution, heated at 95 °C for 15 min in a microwave oven, and cooled at room temperature. The primary antibody of Claudin-18 (1:500, Abcam, Cambridge, MA, USA) was incubated in a wet box at 4 °C overnight, then removed from the humidification box and left at room temperature for 10–20 mins. It was then washed 3 times in phosphate buffer saline (PBS); the secondary antibody (1:10,000, Jackson ImmunoResearch Laboratories Inc., West Grove, PA, USA) was added and incubated in an oven at a constant temperature of 37 °C for 30 min; followed by washing 3 times in PBS buffer solution, and then diaminobenzidine (DAB) was used for color development. It was then dyed with hematoxylin for 3 s, differentiated in lithium carbonate for 2 s; and finally, dehydrated with gradient ethanol, xylene was used for transparency, and it was then sealed with neutral gum.

Clinicopathological information of the patients

All the patients are diagnosed with gastric adenocarcinoma. The clinicopathological information of the 63 participants is listed in Table 1. 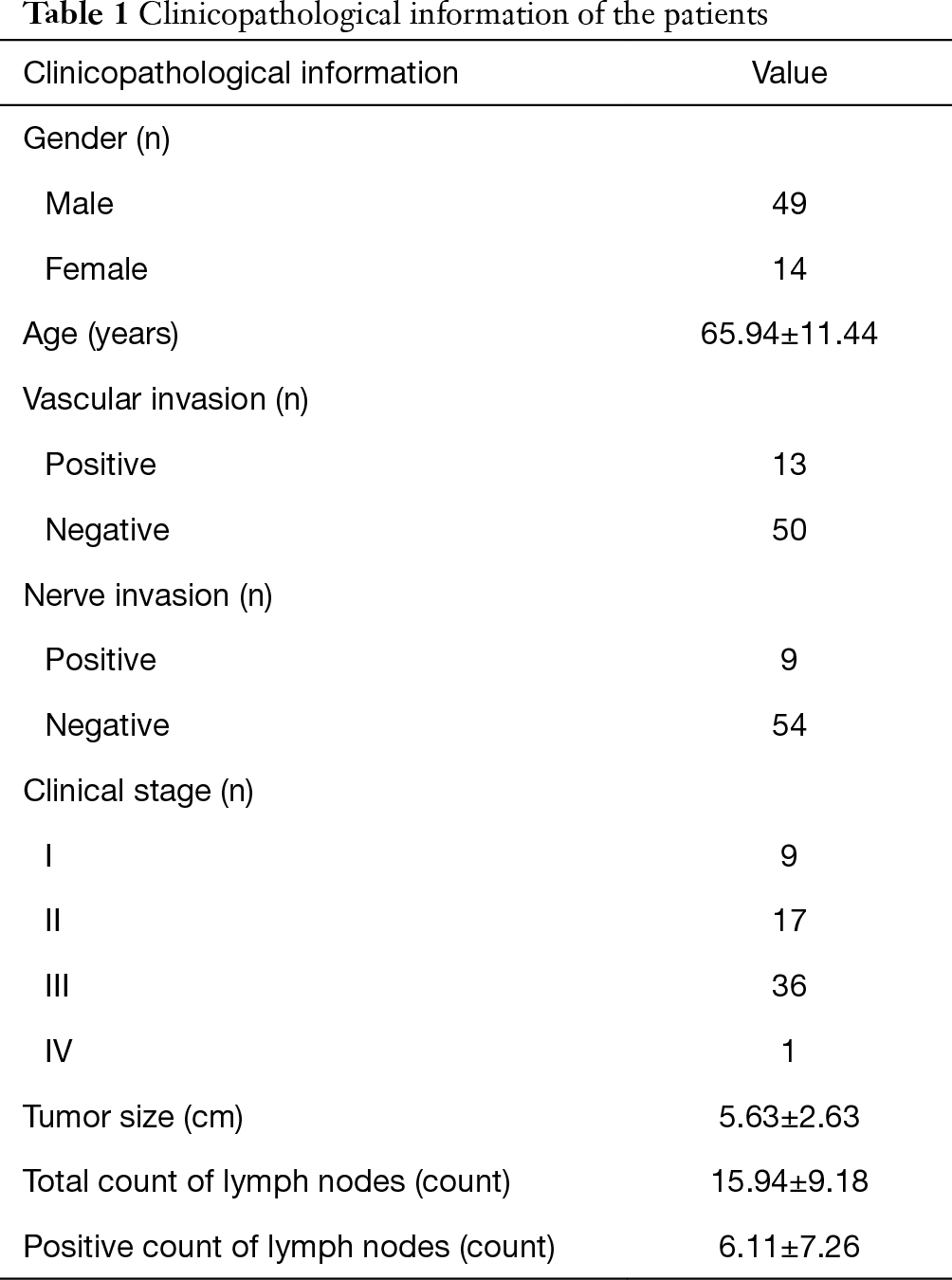 Expression of Claudin-18 in gastric cancer

Correlation between Claudin-18 expression and clinicopathological features of gastric cancer 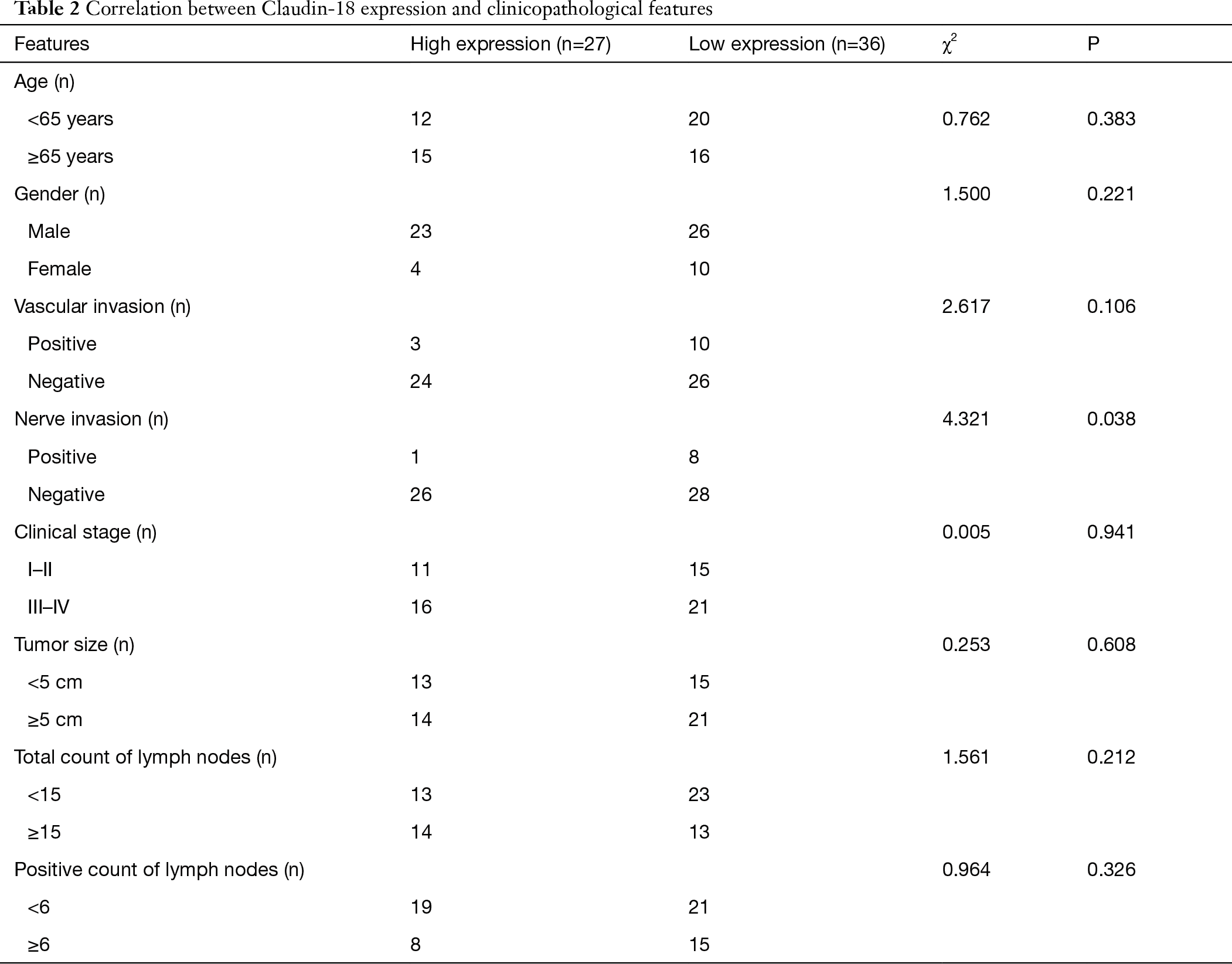 Risk factors associated with the prognosis of patients with gastric cancer

As of June 2019, a total of 37 gastric cancer patients were followed up, and 26 cases were lost for changing the phone number. Finally, 37 participants were included in the statistical analysis. The time of operation of the 37 patients was from December 2012 to June 2013. Up to June 2019, the number of deaths was 18 (48.6%). The survival time of the patients was 1–77 months. The Cox regression model included 37 patients to analyze the risk factors associated with the clinical prognosis of gastric cancer patients. Univariate Cox regression analysis showed that nerve invasion, Claudin-18 staining score, tumor size, and positive count of lymph nodes were risk factors associated with the prognosis of gastric cancer (Table 3).

Then, the 4 positive factors were included in multivariate Cox regression analysis, and the results showed that Claudin-18 staining score and tumor size were independent risk factors associated with the prognosis of gastric cancer (Table 4).

Furthermore, log-rank analysis showed that the overall survival (OS) of patients with a low Claudin-18 staining score was significantly reduced in comparison to those with high staining score (log-rank =7.225, P=0.007, Figure 2A). And the OS of patients with larger tumor size was significantly reduced compared to those with smaller tumor size (log-rank =10.579, P=0.001, Figure 2B).

The Claudin-18 protein participates in the formation of the gastric mucosal epithelial barrier and is closely related to the tissue differentiation, invasion, metastasis, and prognosis of gastric cancer. Previous studies have shown that the expression of Claudins is often reduced in cancer tissues, resulting in abnormal tight junction of tumor cells, cell differentiation, and polarity reduction (10). Our study showed that the expression of Claudin-18 was reduced in gastric cancer tissues, which was consistent with the previous report (10).

There are some strengths and limitations in our study. The clinical and pathological data of gastric cancer patients collected in this study were relatively complete, which increases the reliability of the study to a certain extent. However, there are also the following shortcomings: firstly, this study included patients with preoperative metastases, and the heterogeneity of these patients may have affected the conclusion. We tried to carry out hierarchical analysis to exclude patients with metastases, but the number of cases with complete follow-up data was less than that of intake data, which may have caused statistical bias of this study to some extent; secondly, IHC was semi-quantitative. Although the double-blind scoring method was used in this study, it is susceptible to subjective influence and cannot eliminate measurement bias, which requires improvement for future research.

To conclude, the low expression of Claudin-18 was closely related to nerve invasion in gastric cancer, which indicated the poor clinical prognosis of gastric cancer patients. Claudin-18 is a promising prognosis predictor. The current study provides theoretical and experimental basis for further exploring the mechanism of Claudin-18 and finding new therapeutic targets.

Reporting Checklist: The authors have completed the REMARK reporting checklist. Available at http://dx.doi.org/10.21037/jgo-20-463

Conflicts of Interest: All authors have completed the ICMJE uniform disclosure form (available at http://dx.doi.org/10.21037/jgo-20-463). The authors have no conflicts of interest to declare.

Ethical Statement: The authors are accountable for all aspects of the work in ensuring that questions related to the accuracy or integrity of any part of the work are appropriately investigated and resolved. All procedures performed in this study involving human participants were in accordance with the Declaration of Helsinki (as revised in 2013). The study was approved by the ethics committee of our hospital before implementation (No. IEC20200142). The participants gave their written informed consent before participation in the study.