Esophageal cancer (EC) is a highly prevalent digestive system cancer, increasing incidence, and mortality rates. Although the medical treatment and surgical techniques are developed too much in the last few years, the 5-year surviving percentage of EC patients is still low. One of the factors is that patients with EC have been diagnosed at an advanced stage or have localized invasive and distant metastases. EC can be separated into a couple of pathological types: esophageal squamous cell carcinoma (ESCC) and esophageal adenocarcinoma. The occurrence of ESCC is a multi-factor, multi-step biological process, often accompanied by the dormanting of tumor-inhibiting genes and oncogenes’ activation, like STAT3, PTEN, Snail1 et al. (1,2). The expression dysregulation of these genes greatly resembles the existence and progression of ESCC, but its pathogenesis is not clear.

With the development of genetics and molecular biology, people have a deeper understanding of the pathogenesis of ESCC. In recent years, microRNAs (miRNAs) have been implicated in tumorigenesis and tumor development. MicroRNAs are short non-coding RNAs, almost 18–25 nucleotides long, and are highly conserved (3). MiRNAs can regulate gene expression by the 3’UTR region of that particular mRNA, resulting in regulating translation suppression and/or mRNA degradation at the after-transcription stage, having relation with different life studies cell differentiation, development, and homeostasis process (4). Numerous studies have confirmed that miRNA plays a vital regulatory function in the development and progression of malignant tumors, and it resembles much to the diagnosis, treatment, and prognosis of tumor patients.

MiR-125b is examined in past ages to function as a tumor inhibitor in many cancers. In general, the outlook of miR-125b is down-regulated in tumors and plays a similar function as an oncogene, and the appearance of miR-125b is tissue specific. In different tumors comprising cells, the expression level of miR-125b is different (5), which makes miR-125b increasingly promising in the clinical testing and treatment and prognosis judgment of malignant tumors. At present, it has been found that miR-125b plays the role of oncogene or tumor suppressor gene in gastric cancer (6), liver cancer (7), colorectal cancer (8), breast cancer (9), lymphoma (10) and other malignant tumors, but its expression and regulatory role in ESCC are still unclear.

That is why this exhaustive study aimed to research the outlook of miR-125b in ESCC and its clinical benefits and study the effect of miR-125b on the biological function in ESCC development on a molecular level. The expression level of miR-125b in tumor comprising cells, some samples of ESCC was detected to analyze the interlink between miR-125b and the clinicopathological parameters and recovery as anticipated of patients with ESCC. Then cell experiments were conducted to explore the effect of miR-125b on the biological function of ESCC cells, and the potential target genes were predicted and verified by bioinformatics analysis.

miR-125b‘s detection in cells by qRT-PCR

Total RNA was taken out from ESCC holding cells and ESCC cell lines utilizing Trizol regent, and 5µg of RNA was subjected to reverse transcription to obtain cDNA. The obtained cDNA was used as a template, and the RT-PCR reaction was conducted using SYBR Green PCR Kit. The reaction conditions around were 95 °C for 5 minutes; 40 cycles of approximately 95 °C, 30 seconds, 60 °C, 30 seconds, 72 °C, 1 minute. After the reaction was completed, the dissolution curve was drawn, and U6 was used as the internal reference. The expression of the miR-125b was then calculated by the 2−ΔΔCt method. The following primer pairs were used for the qPCR: miR-125b, forward: 5'-TCC AGT TCG GGA AGT GAA GTG A-3', and reverse: 5'-GTC CAA AGT GGT ATT GCC ACT A-3'. GAPDH, forward: 5'-CTC CAG TAC GTA AGT GCA GAG CT-3', and reverse: 5'-CAG TGA CAC ACG TTG CGT TGT C-3'.

The transfected four groups of cells were made into cell suspensions, and after cell counting, 4×103 cells were seeded into plates, i.e., 96-well, and 3 of the replicate wells were set in every group. After the cells were all attached, the CCK-8 test kit was then used to detect the absorbance at the 0, 24, 48, and 72 hours of each cell‘s cell.

Matrigel gel dissolved overnight at 4 °C was diluted 1:8 on a serum-free medium, and a Transwell chamber with an 8 µm microporous polycarbonate membrane was also put in a sterile plate of 24-well and added to the uppermost portion. The experimenter evenly spread 25 mol/L matrix gel on the bottom of the chamber, and sterile at 37 °C overnight to ensure sufficient polymerization of matrix gel. Transwell cell migration experiments were not performed with Matrigel gel. Each group of cells was collected and made into a single cell suspension. Every group of cells then was separately included in the uppermost portion of the Transwell chamber (1.5×105 cells/cell), and 650 µL of RPMI (medium) containing almost 10% of the fetal bovine serum was poured to the lower chamber. Forty-eight hours, the uppermost chamber cells were thoroughly cleaned utilizing cotton swab, washed with PBS, colored with crystal violet, examined using an inverted phase (contrast) microscope (×200), photographed, and five fields were randomly observed to count the number of transmembrane cells. The experiment was done three times.

A search of bioinformatics websites TargetScan and miRanda showed that miR-125b has a binding place for 3'URT of p38-MAPK, verified by dual luciferase assay, and the luciferase reporter gene was hybridized with wild-type p38-MAPK. The 3'UTR of the mutant p38-MAPK was combined, and the miR-125b was co-transfected with the plasmid carrying the p38-MAPK target fragment for 24 hours. Detection by a multi-function microplate reader and calculating the luciferase, firefly luciferase, and value/Renilla luciferase activities, value setting three duplicate wells per sample.

All the collected information were presented as mean ± standard deviation (x±s) utilizing SPSS19.0 statistical software. Paired t-tests were then used for comparing the two groups. The difference coming between them was statistically better at P<0.05.

miR-125b is shown in ESCC tissues and cell lines

RT-PCR results proved that the relative appearance of miR-125b in ESCC tissues was significantly lower than that in adjoining normal tissues (P<0.05). Similarly, miR-125b was down-expressed in 5 ESCC cell lines equated with normal ESCC, statistically significant (Figure 1). It shows that miR-125b is downregulated in ESCC.

According to the median relative appearance of miR-124 in ESCC holding cells. We divided 52 patients between a very high expression category and also low expression category. The results concluded that the apparent position of miR-125b in tumor tissues was highly correlated between the strength of the invading of TNM level and lymph node metastasis, and no significant correlation with sex, age, and differentiation of tumor (Table 1). 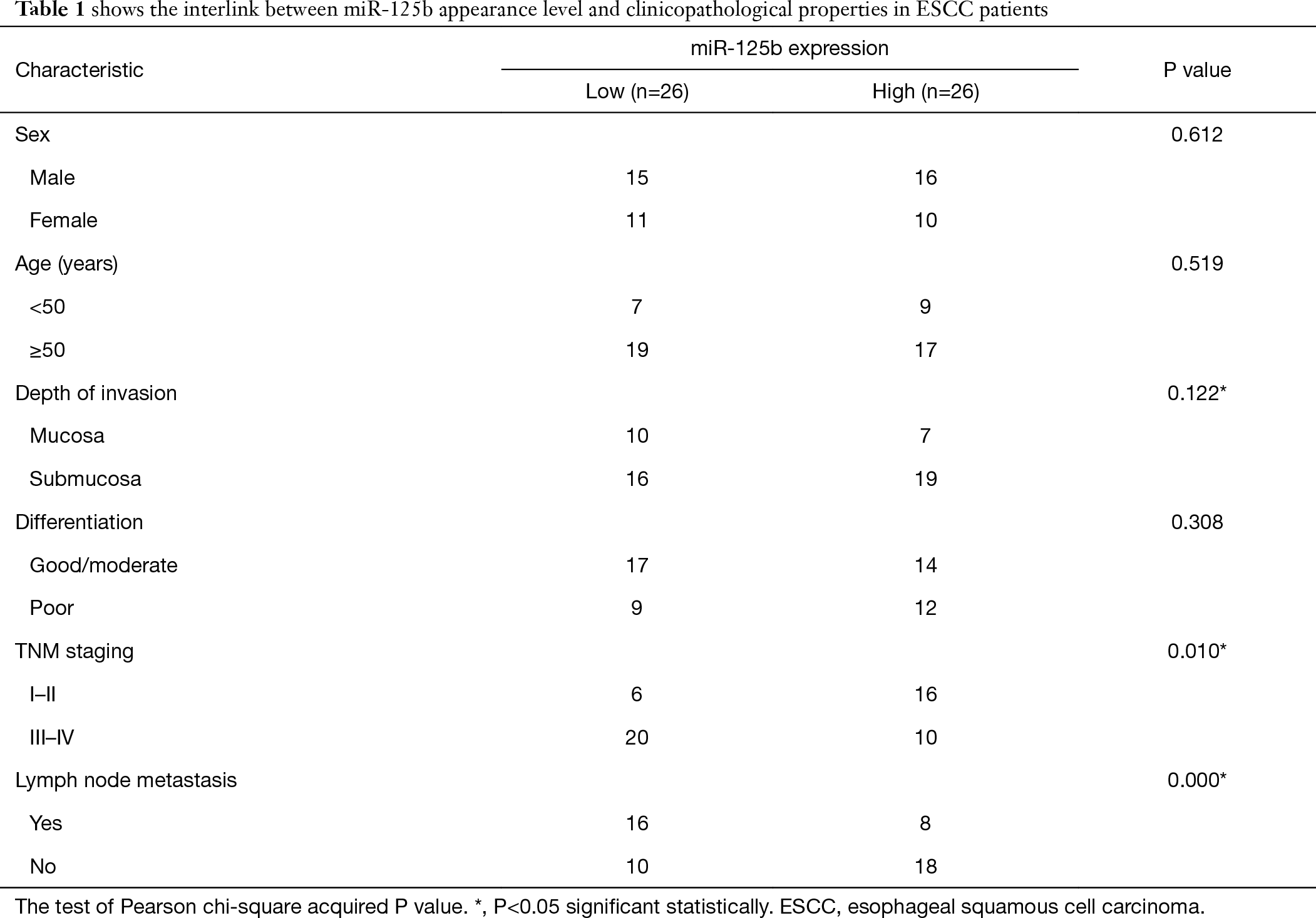 Interrelation analysis between miR-125b expression and patient recovery as expected

Kaplan-Meier curve analysis for existence and survival rate was used to see the link between miR-125b appearance and recovery as predicted of patients with ESCC. The results showed that ill patients with high miR-125b tend to have a longer survival period (Figure 2).

Figure 2 The interlink between the miR-125b appearance level and the total surviving rate. 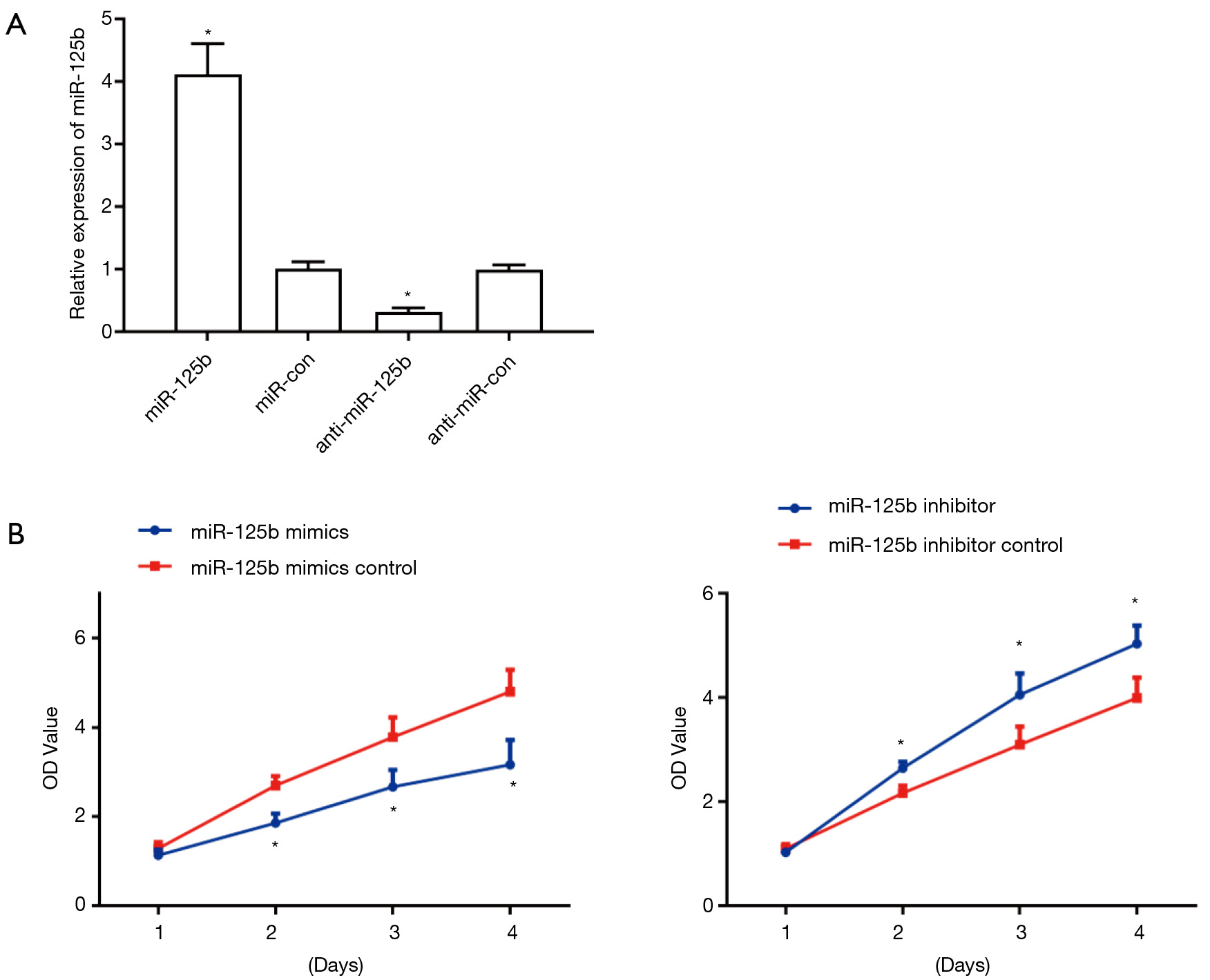 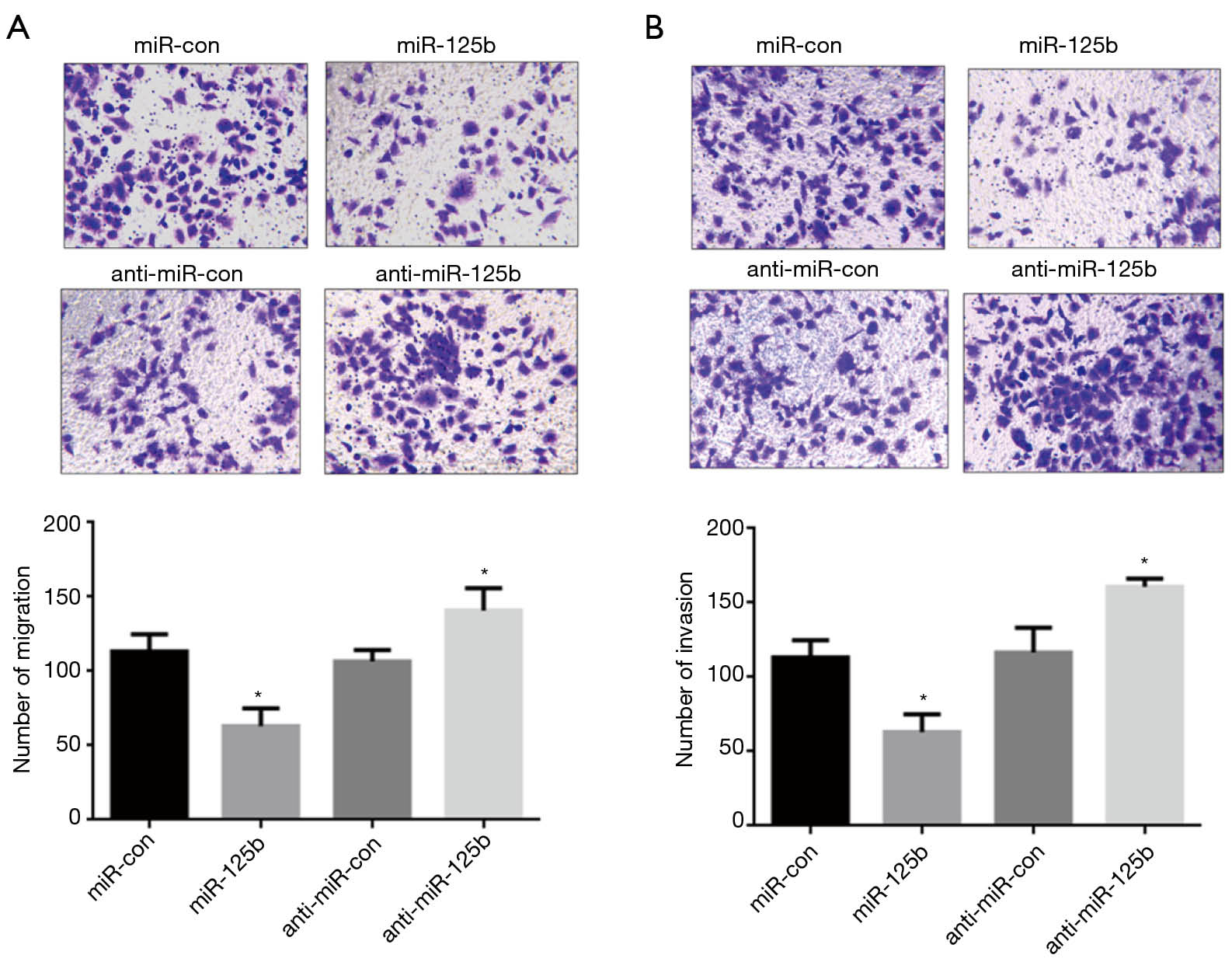 Bioinformatics software analysis revealed a binding place for the miR-125b and p38-MAPK (Figure 5A). The outcome of dual-luciferase assay concluded that the relative fluorescence intensity of p38-MAPK in miR-125b mimics transfection group was lesser than in the control group (P<0.01), and the miR-125b binding site in p38-MAPK 3'UTR was also changed/mutated (Figure 5B). The clogging effect of the miR-125b over the reporter gene disappeared, showing that that miR-125b can act on 3'UTR of p38-MAPK messenger RNA directly to stop the expression of p38-MAPK. 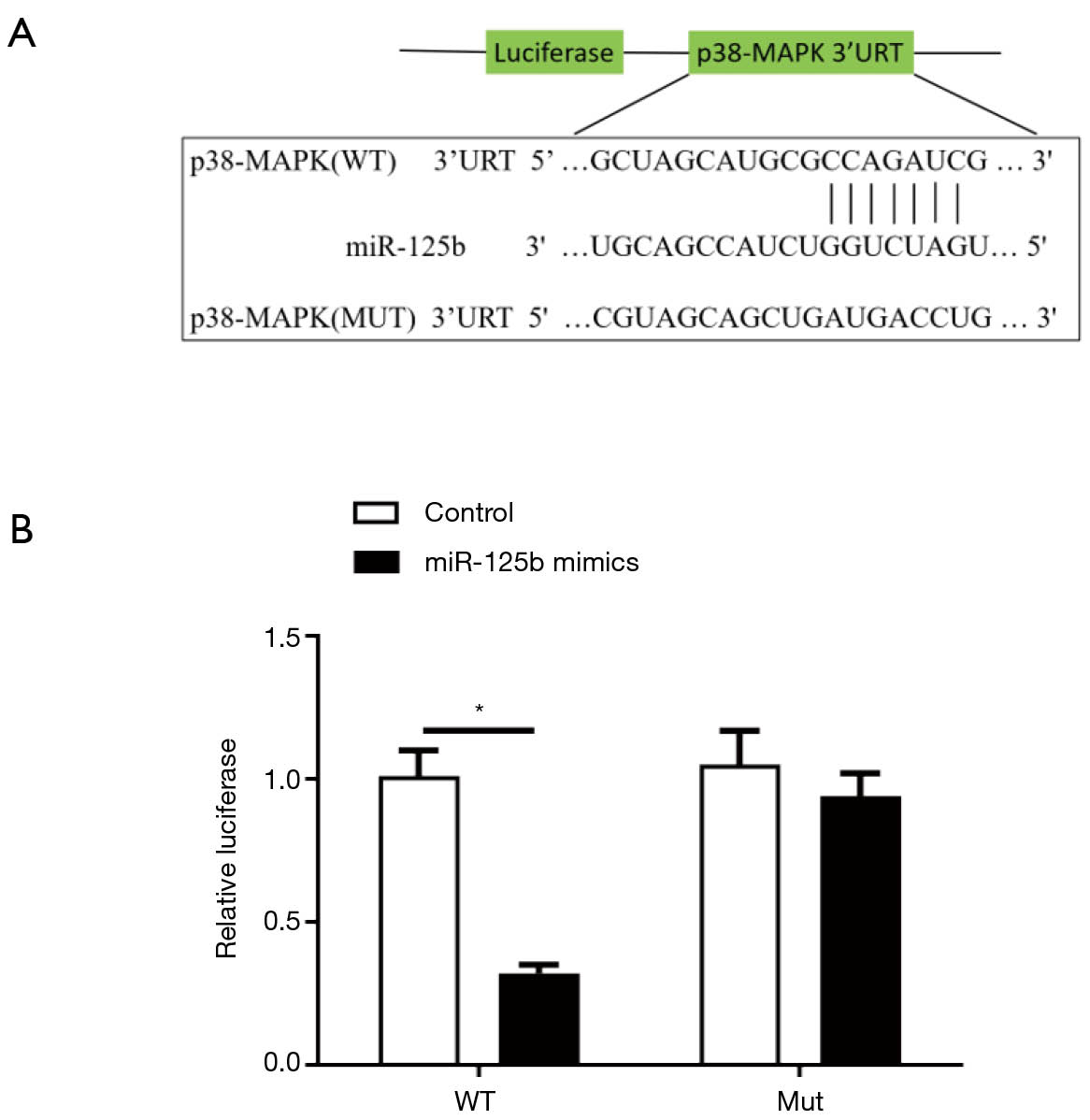 ESCC progression is a complex process involving multiple gene regulation and multiple steps. It is of huge clinical use to understand the mechanism of ESCC development and improve the initial stage diagnosis of ESCC and improve patients’ recovery expectations. MicroRNAs (miRNAs) are a category of small chain non-coding RNA molecules that are about 18–25 nucleotides inhibit length. By binding with the 3'URT site of a particular microRNA, and miRNAs cause mRNA degradation, inhibit protein translation, and regularizes gene showing after the transcriptional stage. Presently, several miRNAs have been found out, most of which are present in cells and have various biological functions such as regulating cell differentiation, development, and homeostasis. Studies found that most of the miRNAs are located in tumor-associated chromosomal sites, participate in regularizing transcriptional expression of tumor-associated genes, and thus participate in DNA damage of tumor cells, regulate the cell cycle, apoptosis and change the tumor microenvironment (11). In tumorigenesis and development, miRNAs play the role of oncogenes or tumor suppressor genes. Earlier studies have reported that more than 30% of human genes regulated with miRNAs aid (12), but the molecular process involved in regulating miRNAs is still largely unclear. MicroRNAs are tissue-specific, conserved, and time-series, making miRNAs have great clinical potential and can serve as potential markers for cancer diagnosis, therapeutic evaluation, and prognosis.

MiR-125b is a part of the miR-125 (family) residing in chromosome 21, which is affiliated with differentiation, proliferation, apoptosis, occupying, metastasis, and malignant cells’ drug resistance containing tumor (13). The expression of that miR-125b is tissue-specific, and miR-125b exerts different regulatory functions in different tumor tissues, such as bladder cancer, breast cancer, hepatocellular carcinoma, and ovarian cancer, melanoma, and osteosarcoma. And below-regulation of miR-125b exerts a tumor-suppressing effect, while in pancreatic cancer and prostate cancer, the expression of miR-125b is much higher than that of neighboring normal tissues and does a function in promoting cancer progression (14). Panella et al. found that the expression of miR-125b was regulated less in hepatocarcinoma containing cells and hepatocellular carcinoma cell lines, and the proliferation along with metastasis of hepatoma cells could be inhibited by targeting the oncogene lin28 (15). By overexpressing miR-125b in cancer cell SKBR3bof the breast, Vilquin et al. found that the appearance of ERBB2 and ERBB3 protein was decreased, and the proliferation ability of breast cancer cells was inhibited (16). Aherne et al. found that miR-125b was hijacked in prostate cancer cells. In androgen receptor prostate cancer cell lines LNCAP and CDs, androgen can develop the buildup of cancer cells of prostate by up-regulating miR-125b (17). The above studies reveal that miR-125b does indispensable regulatory work in developing various tumors, but its research in ESCC is still rare.

While summing up this discussion, the expression of miR-125b is down-regulated in the ESCC, and its expression strength is closely related to the depth of the invasion of the tumor, TNM level lymph node metastasis, and prognosis. miR-125b has this feature of stopping the proliferation, shifting, and invasion of ESCC cells by having a target p38-MAPK signaling pathway, which plays a similar role as a tumor suppressor gene.

Reporting Checklist: The authors have completed the MDAR checklist. Available at http://dx.doi.org/10.21037/jgo-20-546

Conflicts of Interest: All authors have completed the ICMJE uniform disclosure form (available at http://dx.doi.org/10.21037/jgo-20-546). The authors have no conflicts of interest to declare.