We read with great interest the article by Vogl et al. published in the Journal of Gastrointestinal Oncology on a two-centre experience of ramucirumab (RAM) plus paclitaxel or FOLFIRI in advanced gastric/gastroesophageal junction (GEJ) cancer (1). The authors could show a favourable outcome for RAM plus FOLFIRI in a selected cohort (n=16) of taxane-refractory patients or patients with pre-existing neurotoxicity. We can corroborate these findings with a retrospective analysis of 16 patients treated with RAM plus irinotecan or FOLFIRI at our tertiary cancer centre.

The addition of the anti-vascular endothelial growth factor receptor 2 antibody RAM to paclitaxel has been shown to prolong survival in advanced or metastatic gastric/GEJ cancer with disease progression on or after fluoropyrimidine- or platinum-containing chemotherapy (2). The results of the RAINBOW trial led to the approval of RAM in this indication by the Food and Drug Administration as well as by the European Medicines Agency and RAM plus paclitaxel nowadays constitutes the standard second-line therapy. Since the conduction of this pivotal trial, the treatment landscape of localized gastric/GEJ cancer has changed considerably. The FLOT regimen (fluorouracil, oxaliplatin, docetaxel) has replaced EOX (epirubicin, oxaliplatin, capecitabin) as standard perioperative chemotherapy for operable localized gastric/GEJ cancer (3). This regimen has also been adopted by many centres as first-line therapy in patients with advanced/metastatic disease and high tumour volume and/or symptomatic disease (4).

However, approximately 70% of patients undergoing FLOT therapy will suffer from peripheral neuropathy (PNP), which impedes further application of potentially neurotoxic agents in clinical practice (3). In addition, progression under or rapid disease recurrence after FLOT in the perioperative or first-line setting raises the demand for an alternative chemotherapy backbone in subsequent treatment other than paclitaxel (5). We—as others—have therefore combined RAM with FOLFIRI or with irinotecan in analogy to the RAISE trial in colorectal cancer (6).

This is a retrospective analysis of 16 patients with advanced or metastatic gastric/GEJ cancer, who received off-label treatment with RAM plus FOLFIRI or irinotecan at our institution between January 2015 and April 2020. Patients aged 18 years or older with histologically confirmed gastric or GEJ adenocarcinoma were considered eligible. RAM was administered at 8 mg/kg body weight, irinotecan at 180 mg/m2 and FOLFIRI in combination with 5-fluoruracil (5-FU) 400 mg/m2 bolus and 2,400 mg/m2 over 46 hours continuously, biweekly. Palliative treatment was classified as first-line therapy in regard to evidence of metastatic disease, irrespective of interval from perioperative chemotherapy for localized disease. Progression-free survival (PFS) was calculated from the date of therapy start until radiologically confirmed progression or death. Patients without progression at the last contact were censored. Overall survival (OS) was calculated from the date of therapy start until death from any cause. Patients alive at the last contact were censored. Overall response rate (ORR) was evaluated using Response Evaluation Criteria in Solid Tumours (RECIST 1.1) (7). Adverse events were evaluated according to the Common Terminology Criteria for Adverse Events (CTCAE version 4.0). Baseline characteristics were analysed descriptively. The median PFS and OS were determined using the Kaplan-Meier method. Statistical analyses were performed using SPSS for Windows v23 (IBM, Armonk, NY, USA). P values <0.05 were considered to indicate statistical significance.

In total, 16 patients with advanced or metastatic gastric/GEJ cancer were treated with RAM plus FOLFIRI or irinotecan at our institution. Patient baseline characteristics are summarized in Table 1.

Median age was 55 years ranging between 46 and 71 years. One-quarter of patients was 65 years or older. Three-quarters of patients were male. Eastern Cooperative Oncology Group (ECOG) performance status (PS) at start of RAM-based therapy was ≥1 in the majority of our cohort (88%). Primary site of disease was equally distributed to stomach and gastroesophageal junction. Most of primary tumours received perioperative systemic therapy (75%) and had undergone oncologic resection (69%). Peritoneal metastases were present in 38% of patients (n=6). All patients had received prior 5-FU based therapy. Subsequent palliative therapy was applied in 31% of patients (n=5) and consisted of checkpoint-inhibitors, trifluridine/tipiracil or cytotoxic monotherapy. FOLFIRI-RAM or irinotecan-RAM was chosen due to progression during or rapid disease recurrence after FLOT in the perioperative or first-line setting in 63% (n=10) and pre-existing PNP CTCAE grade >1 in 31% (n=5).

The median PFS and OS of all patients were 5.4 (95% CI: 3.7–7.1) and 7.6 (95% CI: 6.1–9.1) months, respectively. The clinical benefit rate was 63% (n=10) with an ORR of 38% (n=6). Only one patient discontinued RAM-based therapy because of treatment toxicity. Presence of peritoneal metastases at treatment initiation was not associated with a statistically significant impact on survival rates. Patients with rapid recurrence, which was defined as disease progression within six months after perioperative chemotherapy, did not show a statistically significant worse outcome in comparison to the rest of our cohort (median OS: 7.6 vs. 7.2 months, P=0.82). Median time to relapse after perioperative chemotherapy in patients with initially curative setting was 3.8 months. 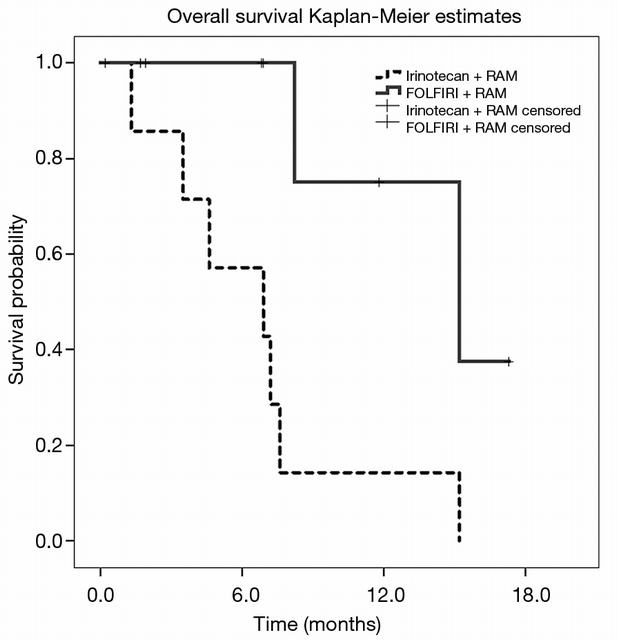 Our results are consistent with the findings of Vogl et al. and support RAM plus FOLFIRI or irinotecan as treatment option for advanced gastric/GEJ cancer in patients with pre-existing PNP, progression during or rapid recurrence following FLOT. A median OS of 7.6 months in this real-world cohort was comparable to the results from the RAINBOW trial (2). Cytotoxic monotherapy with irinotecan in second-line treatment of advanced/metastatic gastric/GEJ cancer is known to improve median OS up to 4.0 months in comparison to best-supportive care (7). The significantly prolonged survival with FOLFIRI as chemotherapy backbone compared to irinotecan in our single-centre cohort might suggest a clinical benefit of 5-FU continuation in combination with RAM and irinotecan. However, results have to be interpreted with caution due to the limited number of patients (n=16). We did not detect statistically significant imbalances of prognostic baseline characteristics between the two chemotherapy backbone groups. However, the majority of patients receiving irinotecan-RAM had been pre-treated with palliative intent, whereas FOLFIRI-RAM was mostly administered as first-line therapy. Due to the retrospective character of this analysis, comprehensive evaluation of adverse events according to CTCAE was not feasible. Half of the patients who had progressed during RAM-based therapy (n=5) underwent at least one further palliative treatment line, which underlines tolerability as shown by the RAISE trial in patients with colorectal cancer (6).

The multicenter randomized phase 2 RAMIRIS trial has recently proven feasibility and PFS benefit of FOLFIRI plus RAM in taxane-pre-treated patients with advanced gastric/GEJ cancer (8). Results of the phase 3 study (NCT03081143) should clarify the clinical efficacy in this setting and are eagerly awaited.

Provenance and Peer Review: This article was a free submission to the journal. The article has undergone external peer review.

Conflicts of Interest: All authors have completed the ICMJE uniform disclosure form (available at http://dx.doi.org/10.21037/jgo-20-230). FH and LW report personal fees from Lilly, outside the submitted work. The other authors have no conflicts of interest to declare.

Ethical Statement: The authors are accountable for all aspects of the work in ensuring that questions related to the accuracy or integrity of any part of the work are appropriately investigated and resolved. This analysis was approved by the Ethics Committee of the provincial government of Salzburg (415-EALL/5/39-2019).