Cholangiocarcinoma (CCA) is classified into intrahepatic (iCCA), perihilar, and distal subtypes, which accounts for 8–10% of biliary tract cancers (1,2). The incidence of iCCA has been increasing over the last 3 decades. While the exact reason of the increased incidence is controversial, which may be related to primary sclerosing cholangitis, viral hepatitis, or chemical exposure (3). Surgery offers the only opportunity for long-term survival, but 5-year survival after curative intent resection remains at only 20–30% (4). However, most iCCA tumors are considered to be unresectable at the time of diagnosis because of the lack of early clinical symptoms. Thus, liver transplantation is the remaining promising treatment for iCCA. However, data from several studies have reported poor post-transplant outcomes in patients with iCCA (5,6). Thus, iCCA is consider to be a contraindication to liver transplantation (7). On the other hand, recent data have shown excellent outcomes in selected patients, thereby justifying transplantation for iCCA patients under restrictive conditions (8,9). Current criteria for evaluating liver transplantation, such as the Milan criteria, that are effective for hepatocellular carcinoma (HCC) patients are not useful for evaluating patients with iCCA. Currently, there is no sufficient criterion for evaluating liver transplantation in patients with iCCA.

In the last few years, some studies have indicated that tumor diameter >2 cm and multinodular are risk factors for recurrence and poorer 5-year survival in patients with iCCA (10,11). In these studies, a single tumor and size ≤2 cm was defined as “very early” iCCA, and all other cases were defined as “advanced” iCCA. Patients with early iCCA have lower recurrence rate and higher survival rate after liver transplantation compared with patients with advanced iCCA. These data support that early iCCA patients should be considered as candidates for liver transplantation. Other study has shown that high CA19-9 levels are predictive of a poor postoperative prognosis (12).

Thus, the objectives of this study were to establish and validate a predictive model for the recurrence and prognosis of iCCA after liver transplantation incorporating CA19-9, tumor size, and tumor number. We present the following study in accordance with the STROBE reporting checklist (available at http://dx.doi.org/10.21037/jgo-20-209).

The study population consisted of patients who had undergone liver transplantation for iCCA at The First Affiliated Hospital, Sun Yat-sen University between 2008 and 2017. This study only included patients with iCCA at the explant. Patients with mixed hepatocellular cholangiocarcinoma tumors, transplant recipients who were <18 years old, and those without complete clinical data were excluded from the study. Twenty-seven patients were excluded due to the exclusion criteria. Twenty-one patients were used to develop the model, and 28 patients were used to validate the model. The patients in the discovery cohort were from 2008 to 2012, and the patients in the validation cohort were from 2012 to 2017.

All patients with iCCA on the waiting list were excluded from extrahepatic metastasis by imaging examination pre LT. Patients with a waiting time of more than 6 months could be treated with ablation and transarterial chemoembolization (TACE) as pretransplant bridging therapies. In addition to TACE and ablation, patients with iCCA diagnosed preoperatively received chemotherapy based on gemcitabine and cisplatin.

Eight potential predictors were screened to determine which variables were independent predictors of recurrence, which were selected based on clinical experience and previous studies: age, gender, MELD scores, HBV-DNA, number of tumor, CA19-9 level, tumor size, preoperative treatment. Univariate and multivariate analysis were performed to evaluate the potential value of risk factors.

Multivariate analysis using the cox proportional hazards regression model was used to determine the risks for post-LT recurrence. A cut-off value was derived from the area under the receiver operating characteristic (ROC) curve(AUC) based on the highest Youden index. The predictive model was examined in the validation cohort and assessed for calibration using the Hosmer-Lemeshow C test. Survival curves were generated with the Kaplan-Meier method, and compared with the log-rank test. All data were analyzed using SPSS version 19.0 (SPSS, Chicago, IL, USA). Statistical significance was considered as P<0.05.

All organs came from voluntary donations from citizens; no organs from executed prisoners (even with his/her consent) were used involved. Because of the retrospective nature, the requirement of informed consent was waived. The study was approved by the Institutional Review Board of the The First Affiliated Hospital, Sun Yat-sen University [Approval No. (2020) 344] and was performed in accordance with the Declaration of Istanbul. All protocols conformed to the ethical guidelines of the 1975 Helsinki Declaration (as revised in 2013). 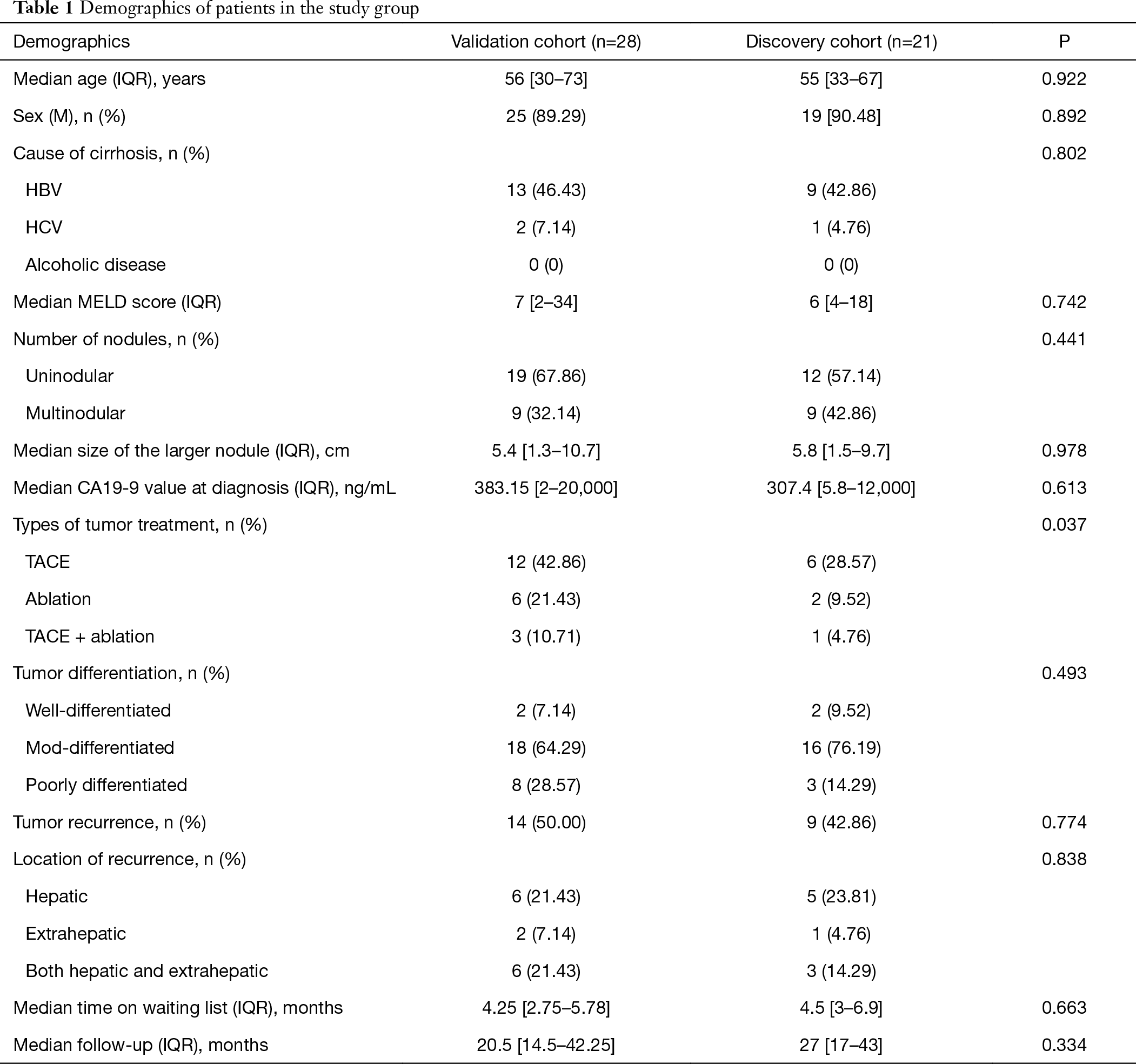 Table 1 Demographics of patients in the study group
Full table

Of the 8 potential risk factors for recurrence, CA19-9 level, largest tumor diameter, and number of nodules were significantly associated with tumor recurrence (Table 2). 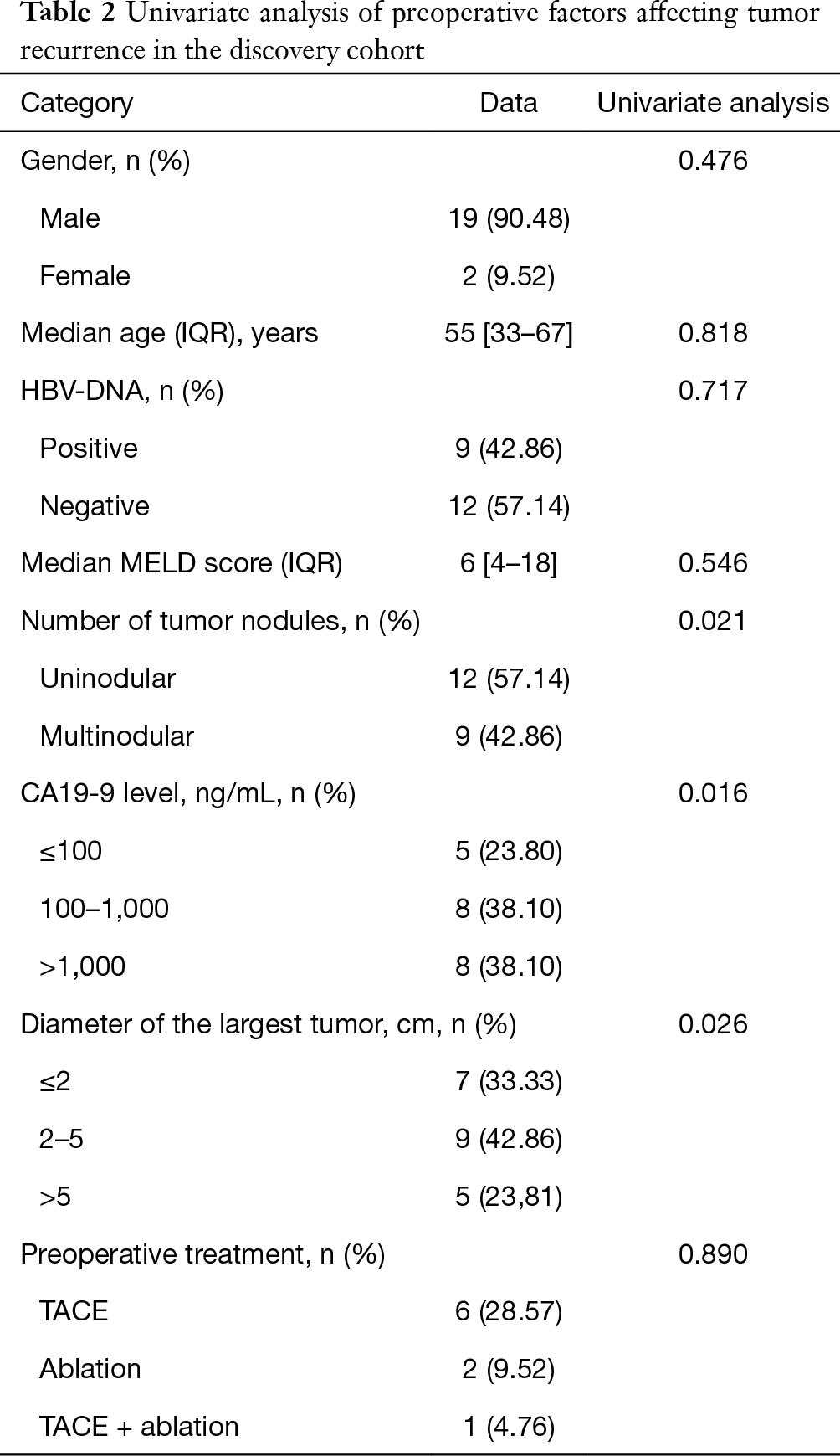 The β regression coefficient values and hazard ratios (HRs) for each independent predictor of iCCA recurrence are summarized in Table 3. The AUC of the model for predicting recurrence was 0.736 [95% confidence interval (CI): 0.549–0.923], with a sensitivity of 69.2% and a specificity of 73.3%. 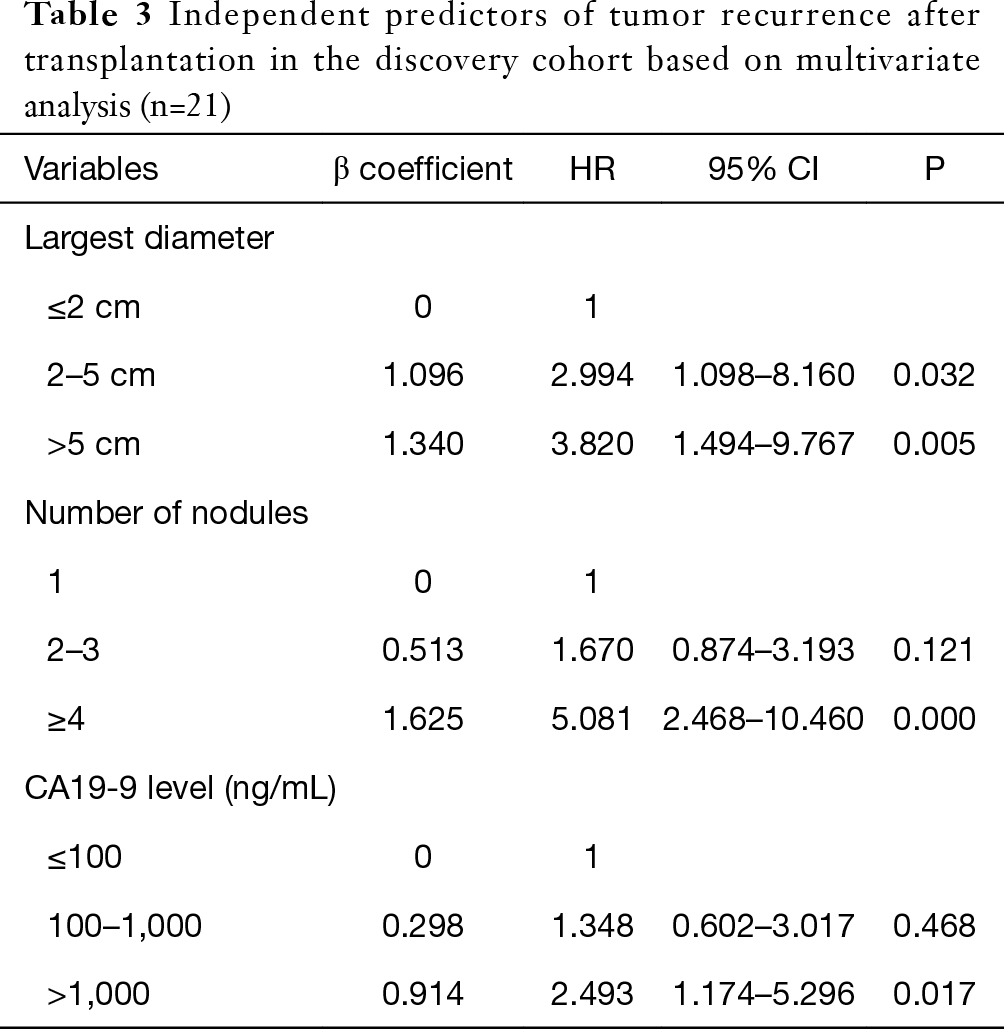 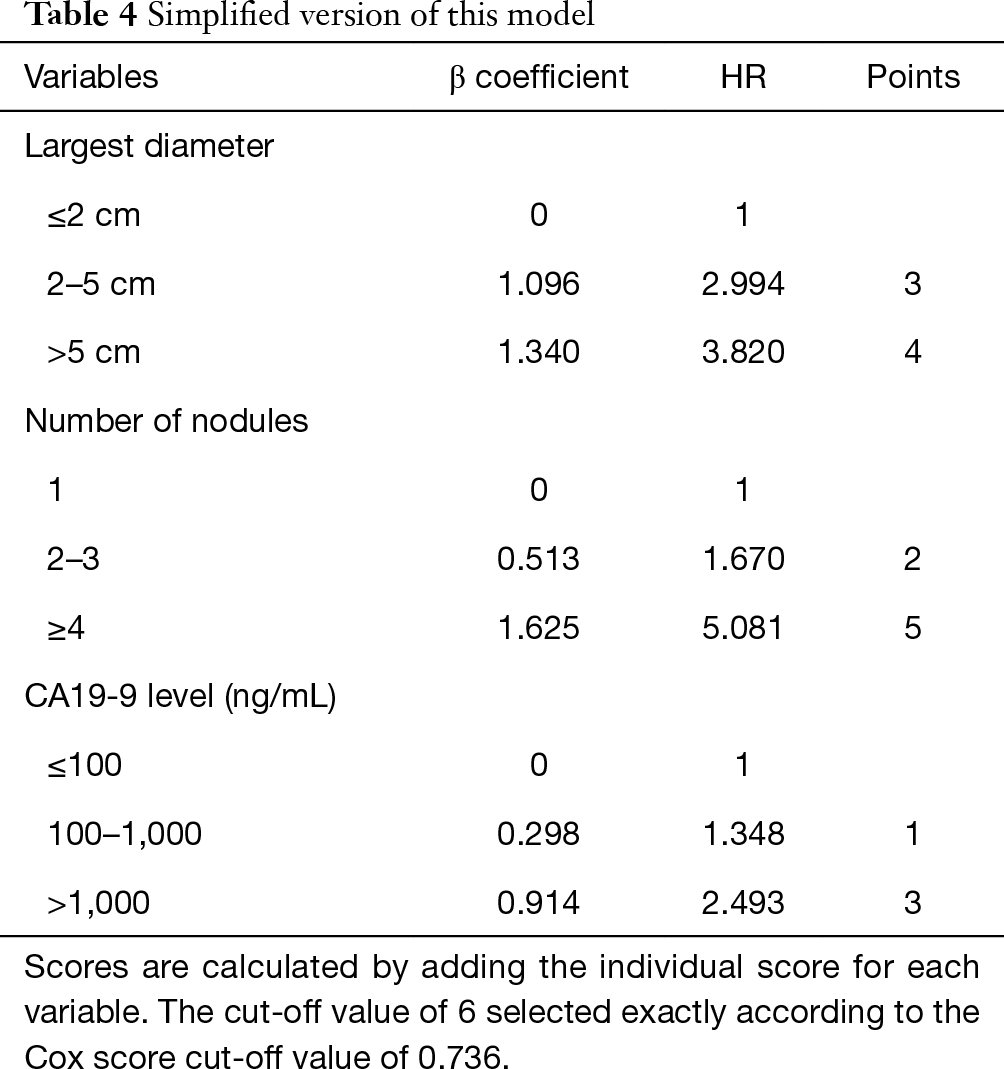 Figure 1 Risk of recurrence (A) and overall survival (B) according to the score cut off of 6 in discovery cohort.

Figure 2 Risk of recurrence (A) and overall survival (B) according to the score cut off of 6 in validation cohort.

While the indications for liver transplantation for iCCA are controversial, several studies have shown that iCCA patients with small solitary tumors have good long-term survival after liver transplantation. In 2016, Sapisochin et al. (10) conducted a multicenter study that included 48 patients with iCCA. Among them, 15 patients had very early iCCA and 33 patients had advanced disease (single tumor >2 cm or multifocal disease). The advanced group had a higher 5-year recurrence rate than the very early iCCA group (61% vs. 15%, respectively), and lower 5-year OS (45% vs. 65%, respectively). Therefore, appropriate selection criteria are required to ensure a better prognosis of patients undergoing liver transplantation for iCCA .

In addition to the Milan criteria for evaluating patients with HCC, several other selection criteria have been proposed and include the Up-to-7 criteria, Hangzhou criteria, the AFP French model, and UCSF criteria (14). However, is no specific criterion for evaluating iCCA patients for liver transplantation. We explore the establishment of specific criteria for iCCA in order to facilitate the selection of appropriate patients to ensure better outcomes after liver transplantation.

The size and number of tumors play an important role in the prognosis of patients undergoing LT for iCCA. In 2014, a multicentre study demonstrated that liver transplantation for patients with very early iCCA (single tumor ≤2 cm) could achieve a 5-year survival rate of 73% (11,13). A multicenter study performed at 17 large institutions worldwide also confirmed that patients with very early iCCA have an acceptable 5-year survival rate and a low recurrence rate after liver transplantation (10). Studies have explored the significance of CA19-9 in iCCA, and reported it is associated with recurrence and decreased long-term survival after resection (15,16). Some studies have included CA19-9 level in iCCA staging, and a recent study reported that staging system for predicting survival of iCCA patients after LT, which classified patients with iCCA into four prognostic stages (17,18). Another study showed that a preoperative CA19-9 serum level of <100 U/mL was associated with better outcomes in patients with iCCA who received macroscopic curative resection (19). In the present study, we showed that size and number of tumors, and serum CA19-9 level were independent predictors of recurrence after transplantation for iCCA, and also predicted post-transplantation survival.

Other models have been proposed for predicting the prognosis of iCCA after hepatectomy, and are based on alkaline phosphatase, CA 19-9, CEA, number of tumors, tumor size, and tumor boundary type (20,21). On this basis, we designed and validated a new predictive model that combined CA19-9 serum level and tumor size and number. Although the model was based on the analysis of only 28 patients, it exhibited good predictive value for iCCA recurrence after LT. A simplified version of the model was developed for predicting recurrence of iCCA based on the highest Youden index of ROC curve, which was 6. A score was calculated for each patient based on the simplified version of the model. Patients with a model score ≤6 had significantly better outcome than patients with a score >6. Only 30–40% of patients with iCCA were deemed to benefit from surgical resection (7,22), and 5-year OS rate of patients with iCCA undergoing surgical resection varies between 11% and 40% (20,23,24). As for LT, in a multicenter study from Spain, the 5-year survival rate of LT for patients with very early iCCA could be 73% (8). Collectively, these data suggest that select suitable iCCA patients for liver transplantation to achieve better prognosis. As for locoregional treatments and systematic therapy, TACE and ablation are locoregional treatment options that could prolong survival in iCCA patients, especially recommended for the local control of small and localized lesions without extrahepatic spread (25). The role of systematic therapy in patients with unresectable iCCA is more clearly demonstrated, and proved the benefit in patients underwent R1 resection and with LN metastasis (26).

This study has several limitations. This was a retrospective, single-center analysis with a small number of patients, and with a long inclusion period, which might limit the reproducibility of the results. However, it is important to consider the rarity of iCCA, and the fact that fewer patients receive liver transplantation for iCCA than hepatectomy.

In conclusion, we identified 3 independent risk factors for recurrence in iCCA patients post LT, and set up a model based on these preoperative factors to improve the selection of iCCA patients at low risk of recurrence post LT. Based on the model, we propose combining CA19-9, tumor number, and tumor size to select suitable iCCA patients for liver transplantation. The simplified version of the model was also established to facilitate clinical application. However, given the limitations mentioned above, this model needs further validation and improvement with a larger multi-centre sample of more defined subjects.

Reporting Checklist: The authors have completed the STROBE reporting checklist. Available at http://dx.doi.org/10.21037/jgo-20-209

Conflicts of Interest: All authors have completed the ICMJE uniform disclosure form (available at: http://dx.doi.org/10.21037/jgo-20-209). The authors have no conflicts of interest to declare.

Ethical Statement: The authors are accountable for all aspects of the work in ensuring that questions related to the accuracy or integrity of any part of the work are appropriately investigated and resolved. Because of the retrospective nature, the requirement of informed consent was waived. The study was approved by the Institutional Review Board of the The First Affiliated Hospital, Sun Yat-sen University [Approval No. (2020) 344] and was performed in accordance with the Declaration of Istanbul. All protocols conformed to the ethical guidelines of the 1975 Helsinki Declaration (as revised in 2013).