Hepatocellular carcinoma (HCC) is a fatal malignant tumor with a poor prognosis, and is the third leading cause of cancer-related deaths worldwide (1). With the deterioration of China’s ageing population, the burden caused by HCC mortality may yet be a huge challenge for China in the future (2). In China, HCC is primarily caused by viral factors. The current priorities strategy for reducing HCC is to promote hepatitis B vaccination, prevent the spread of hepatitis C, and reduce alcohol consumption (3). Surgical resection and liver transplantation are still the standard therapeutic options for the treatment of HCC (4). For surgical resection, the choice of anesthetic drugs plays an important role in the subsequent treatment of HCC. Previous studies have shown that anesthetic drugs strongly accelerate the postoperative progression of spontaneous lung metastases from 3LL Lewis lung carcinoma andB16 melanoma (5). However, emerging research has increasingly shown that anesthetic drugs can reduce the metastasis-promoting activities induced by cancer surgery as a result of immune responses to physiological and anatomical trauma (6). In addition, bupivacaine exhibits direct anti-cancer activity, and its migration-inhibiting effect on gastric cancer is superior to its growth- and survival-inhibiting effect (7).

In eukaryotic cells adenosine monophosphate-activated protein kinase (AMPK) is a key regulator of energy balance that is expressed ubiquitously (16). AMPK is closely related to the tumor suppressor function of liver kinase B1 (LKB1) and tumor protein p53, thereby regulating the activity of cell survival signals such as mammalian target of rapamycin (mTOR) and protein kinase B (Akt), leading to inhibition of cell growth and cell cycle arrest (17). It has been reported that the overexpression of large tumor suppressor gene 2 (LATS2) can attenuate the treatment resistance of HCC HepG2 cells to sorafenib-mediated death by suppressing the AMPK-mitofusin 2 (Mfn2) signaling pathway (18). Inhibition of glycogen synthase kinase-3 beta (GSK-3β) activity inhibits the HCC malignant phenotype by suppressing glycolysis by enhancing AMPK/mTOR signaling (19). Importantly, AMPK may serve as a novel target to overcome chemoresistance in HCC (20). Based on the foregoing research, this study aims to explore the effect of propofol on the AMPK signaling pathway in HCC. We present the following article in accordance with the ARRIVE reporting checklist (available at http://dx.doi.org/10.21037/jgo-20-472).

The HepG2 cells used in this study were purchased from Chinese Type Culture Collection. The cells were cultured in Roswell Park Memorial Institute (RPMI) 1640 medium (Gibco, USA) [containing 10% fetal bovine serum (FBS), 1×105 U/L penicillin, and 1×105 U/L streptomycin], and then incubated at 37 °C with 5% carbon dioxide (CO2). The RPMI 1640 medium, FBS, penicillin-streptomycin, and trypsin were purchased from Gibco, USA. The medium was changed every 2 days. This experiment used cells in the logarithmic growth phase.

HepG2 cell apoptosis was assessed using an Annexin V Staining Kit (BD Biosciences, San Diego, CA, USA). Briefly, the cells were harvested, washed with cold PBS and resuspended in binding buffer, and then incubated with Annexin V and PI for 15 min at room temperature. Sorting was performed, and the cells were analyzed using BD FACSCanto II.

All animal experiments were approved by the Quanzhou First Hospital Affiliated of Fujian Medical University and were performed according to the National Institutes of Health (NIH) Guide for the Care and Use of Laboratory Animals. Eighteen Bagg Albino (BALB/c) nude mice were purchased from Fujian Medical University (female, 5–6 weeks old, weight 17.44±4.28 g). A xenograft nude model was established in female BALB/c mice. A 0.1 mL cell suspension containing about 5×107 HepG2 cells was subcutaneously injected into the right flank regions. One week later, tumor size (volume >200 mm3) was used to evaluate whether the tumors had successfully formed. Next, propofol or an equivalent volume of saline solution was injected intraperitoneally every 3 days consecutively for 30 days. The mice were randomly divided into two groups: (I) HepG2 xenograft group and (II) propofol (35 mg/kg) group (12).

Tumor tissue samples were placed on slides and fixed with 4% paraformaldehyde (Sigma-Aldrich, Germany) for 10min. The slides were subsequently blocked with 1% bovine serum albumin for 1 h, and incubated at 4 °C for 12 h with primary antibody rabbit anti-PCNA antibody (1:10,000, ab29, abcam) and anti-P27 (1:50, ab32034, abcam). Next, the slides were incubated with goat anti-rabbit immunoglobulin G (IgG) HRP-conjugated secondary antibodies for 1 h. The nuclei were stained with 4',6-diamidino-2-phenylindole (DAPI; Sigma-Aldrich, Germany). Fluorescence imaging was analyzed using confocal laser scanning microscopy (Carl Zeiss, Oberkochen, Germany). The integrated option density (IOD) and area of the myocardial cells were evaluated in each tissue section, and were used to obtain the average optical density value (OD = IOD/area). Four slices were selected, and four fields of view were selected for each slice.

Part of the tumor tissues were taken to make paraffin sections. After routine deparaffinization, the sections were immersed in 0.1 M pH 6.0 citric acid buffer, microwaved for 5 minutes, and washed twice with PBS. They were then added to the TUNEL reaction solution in a wet box at 37 °C for 1 h in the dark, and washed with PBS three times. The slides were stained with TUNEL using the in situ cell death detection kit, POD (Roche, Penzberg, Germany). POD was added to the slices in a humid chamber at 37 °C for 30 min, washed three times with PBS, and dried. 3,3'-Diaminobenzidine (DAB) was added at room temperature for 10 min, counterstained, dehydrated with gradient ethanol, clarified with xylene, and sealed with neutral glue. The sections were observed under an OLYMPUS DX51 fluorescence microscope (Tokyo, Japan), and five fields of view were randomly selected for image analysis using image6.0 (Media Cybernetics, USA). The TUNEL cell apoptosis detection kit (C1091) was purchased from Shanghai Biyuntian Institute of Biotechnology (Shanghai, China).

All experiments were carried out independently at least three times, and all experimental data were expressed as mean ± standard deviation (SD). The Student’s t test and SPSS 22.0 software (SPSS Inc.) were used for statistical analysis between the two groups. P<0.05 was considered statistically significant.

HepG2 cells were treated with different concentrations of propofol for 24 h. The results showed that HepG2 cell viability was decreased significantly as the concentration of propofol increased (Figure 1A). According to the results of the cell viability experiments, we selected propofol at a concentration of 5, 10, and 20µM for subsequent experiments. After treatment with propofol, the mRNA and protein expression levels of PCNA and survivin were decreased compared with the 0 µM propofol (control) group (Figure 1B,C, P<0.05). These results suggested that propofol could inhibit HepG2 cell proliferation. 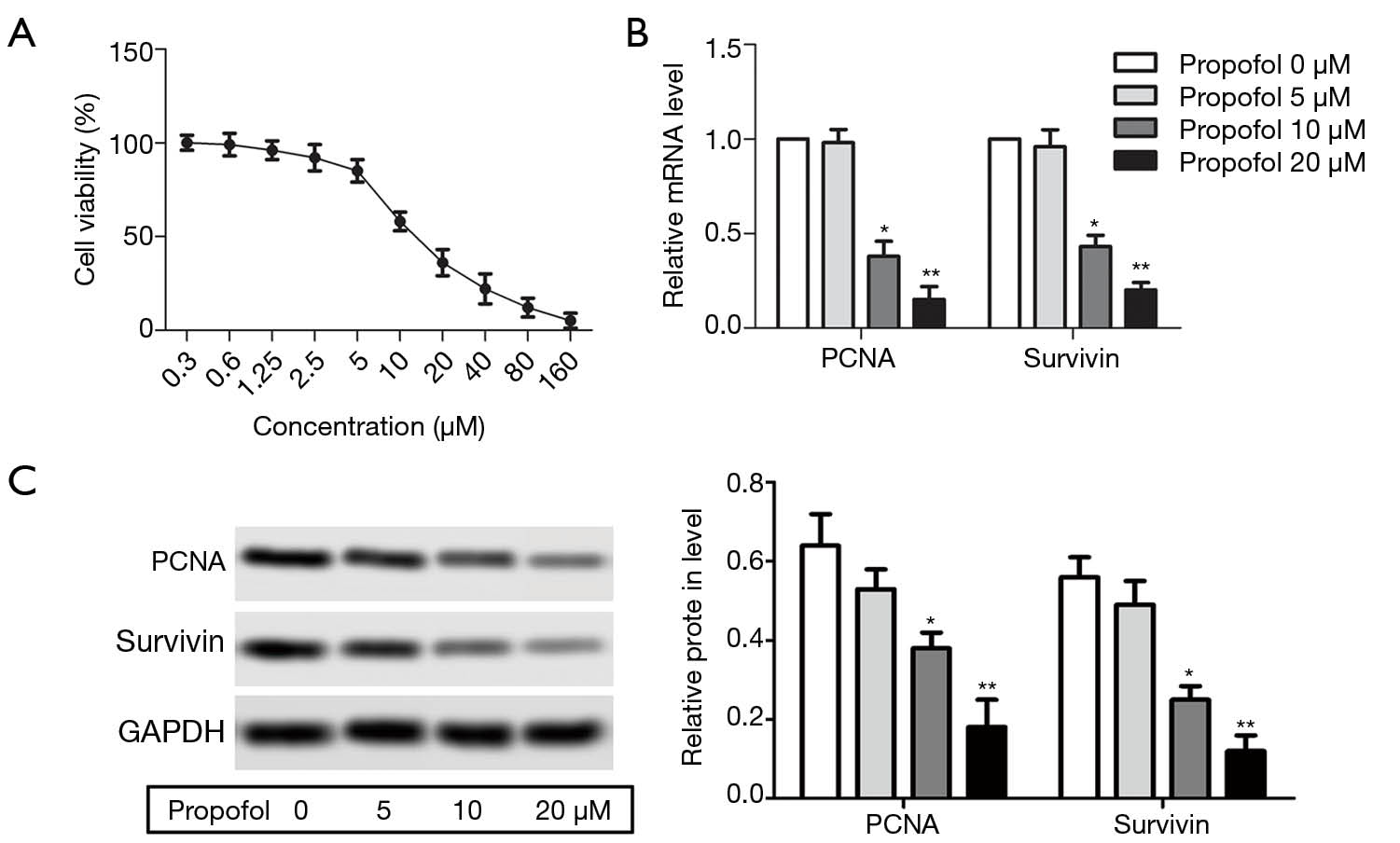 After treatment with propofol, flow cytometry showed that HepG2 cell apoptosis was increased compared with the control group (Figure 2A, P<0.05). The protein expression levels of cleaved caspase-3 and cleaved caspase-9 were detected by western blot, and were notably elevated compared with the control group (Figure 2B, P<0.05). These results indicate that propofol could promote HepG2 cell apoptosis. 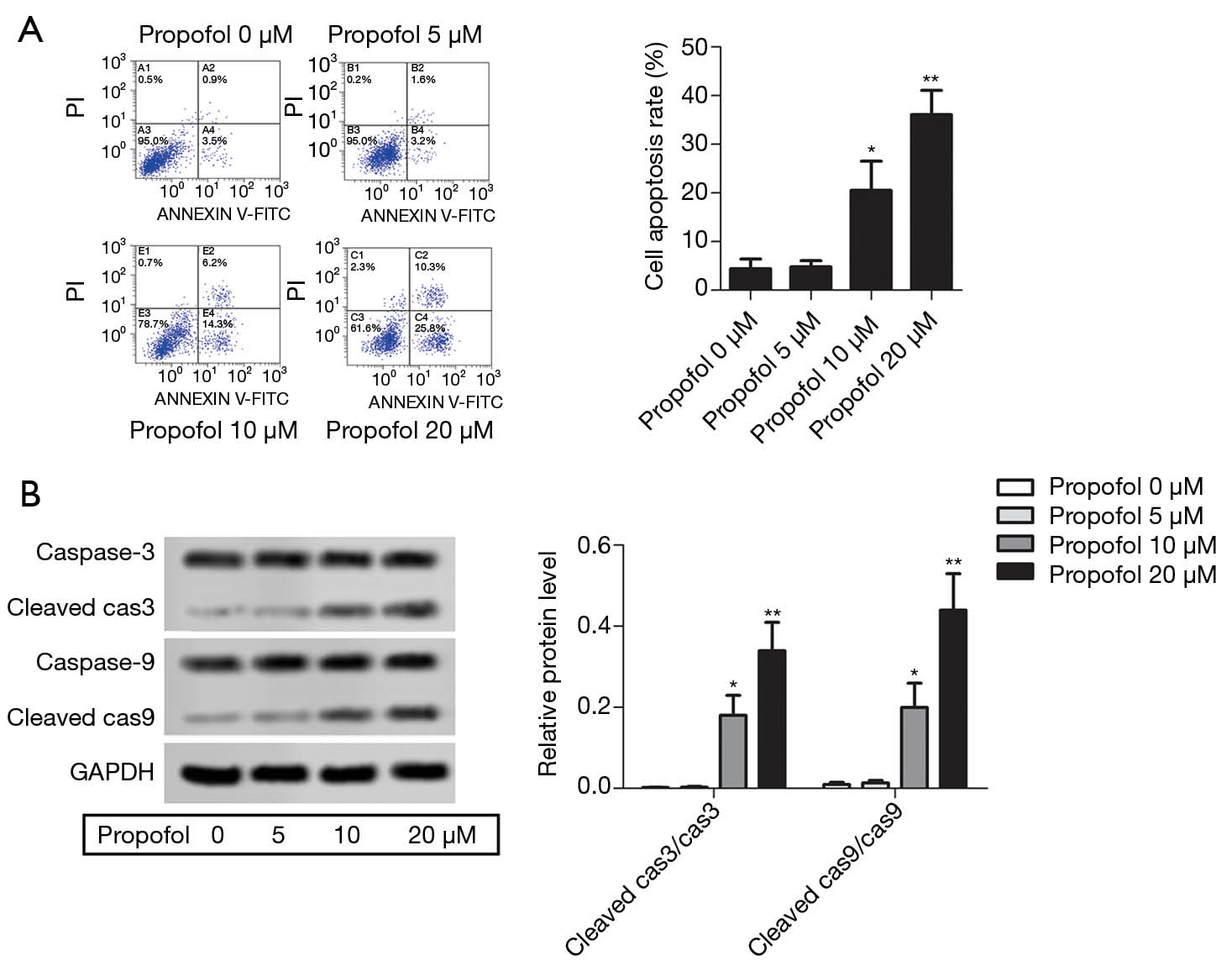 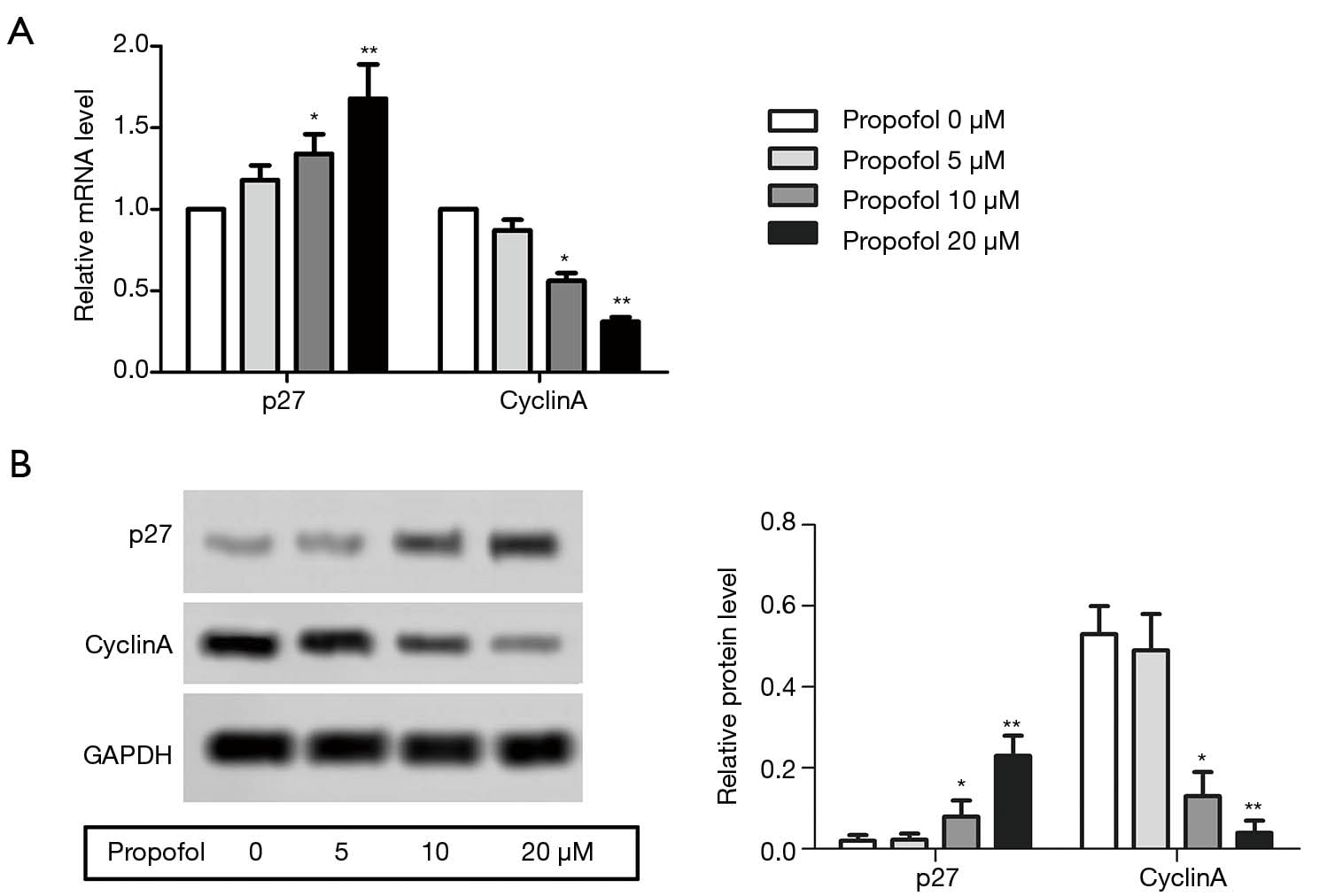 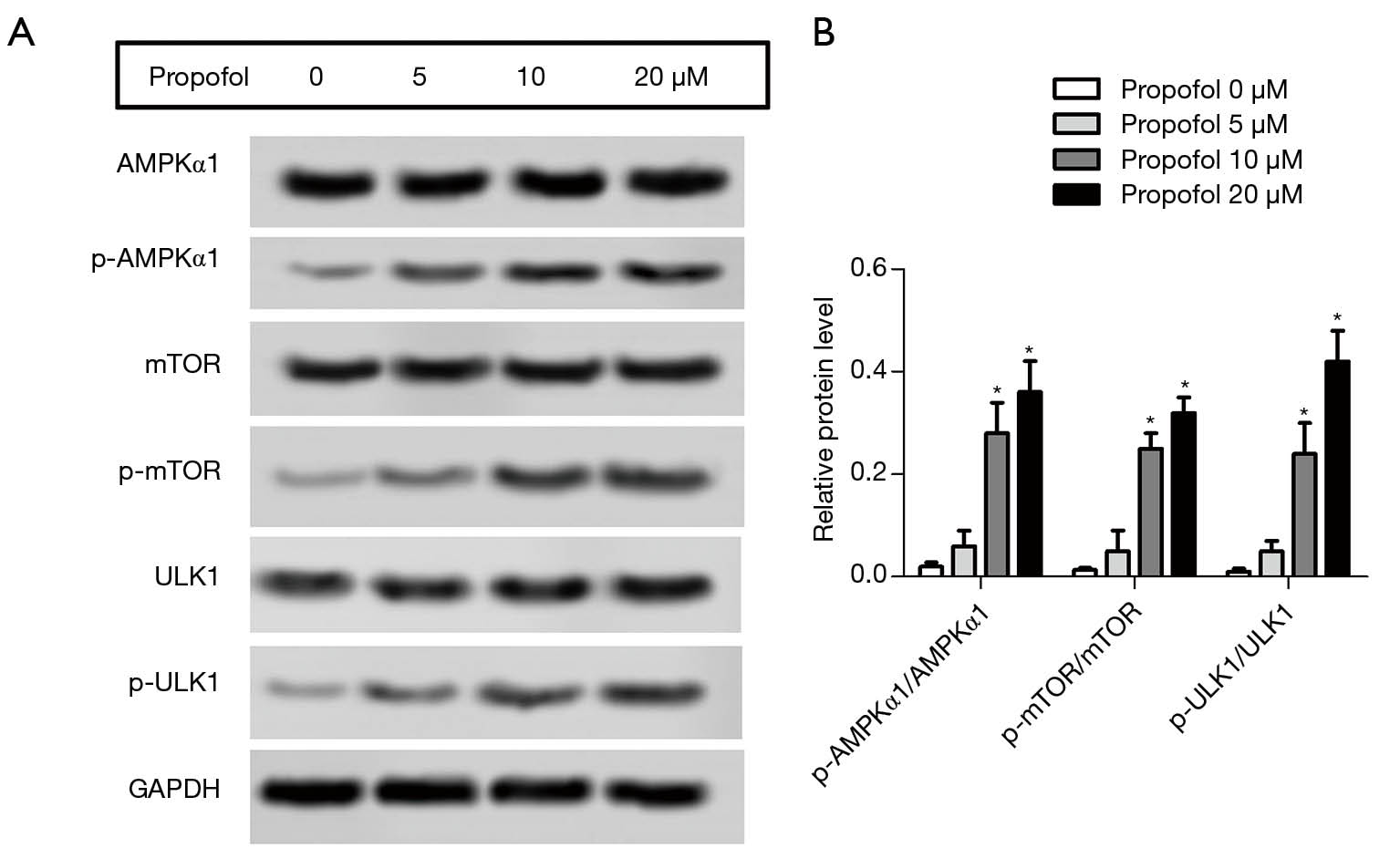 The effect of propofol in vivo 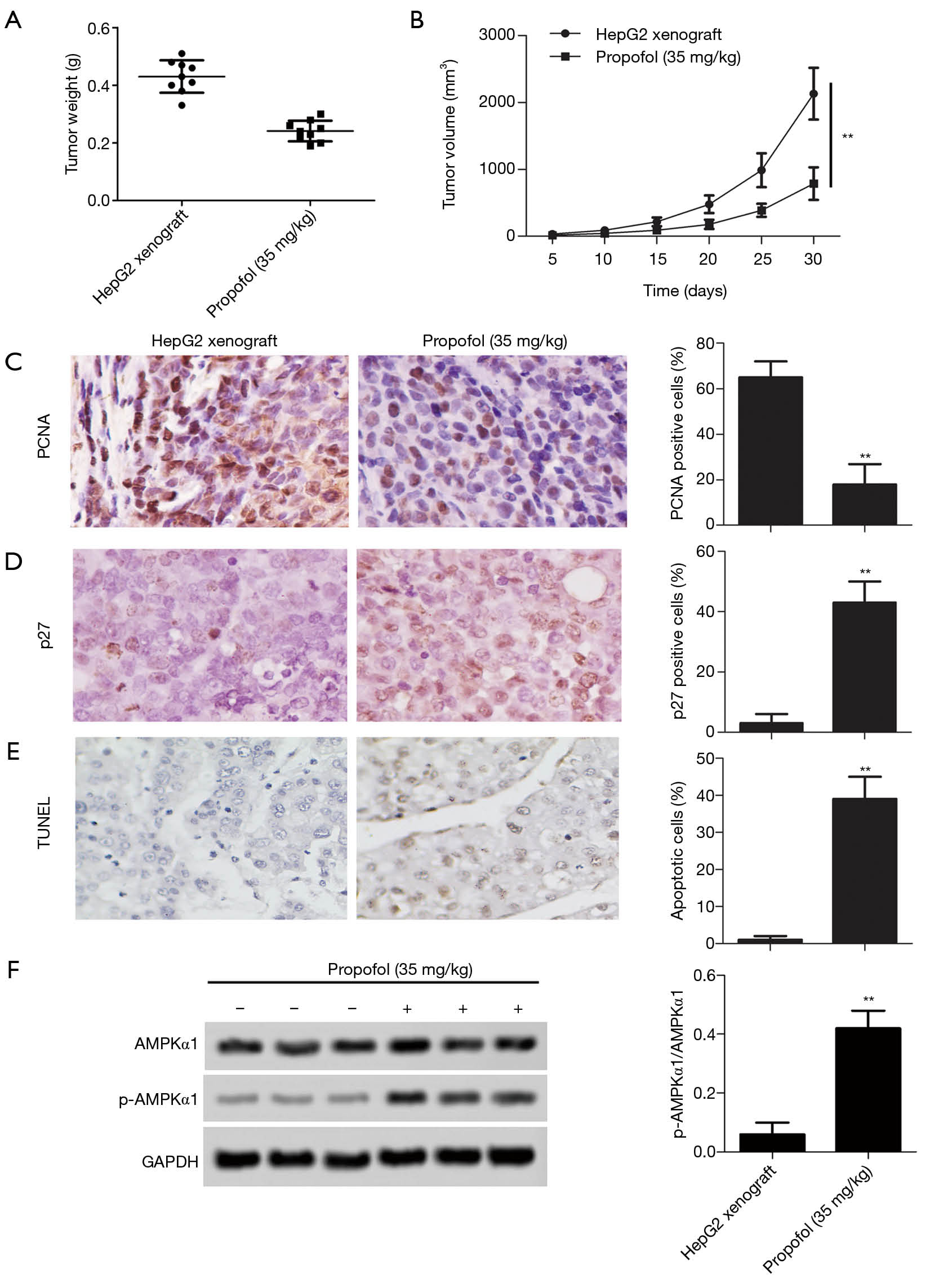 Liver cancer is the most common malignancy of the digestive system, and has a high mortality rate. It is classified into HCC and intrahepatic cholangiocarcinoma (ICC) (21,22). At present, the standard treatment for liver cancer includes surgical resection, cytotoxic chemotherapy, immunotherapy, and oncolytic virus therapy (23). For HCC, surgical resection and liver transplantation are still the basic therapeutic options (4). For surgical resection, the choice of anesthetic drugs plays an important role in the subsequent treatment of HCC. Propofol anaesthesia was associated with better survival in HCC patients who underwent hepatectomy (24). Propofol inhibits cell viability, migration, and invasion, but promotes apoptosis of HepG2 and SMMC-7721 cells. Also, the levels of cleaved caspase-3 and cleaved caspase-9 are up-regulated (25). Previous research has shown that PCNA is a key protein necessary for deoxyribonucleic acid (DNA) replication in proliferating cells (such as cancer cells) (26). Survivin has been extensively investigated using proliferation and apoptosis assays in tumor cells (27). It can inhibit cell death and regulate the cell cycle, especially during the mitotic phase, which all contribute to the progression of cancer. Clinical specimens have demonstrated that the expression of survivin is always up-regulated in human cancers and is associated with chemotherapy or radiotherapy resistance, as well as poor prognosis (28).

Cell cycle progression is closely regulated via a complex network of regulatory molecules. The cell cycle refers to a series of events that occur during cell division that are precisely controlled to adjust cell proliferation, apoptosis, and other events critical to cell survival (31). Loss of normal cell cycle control is a hallmark of cancer (32). P27 not only regulates the cell cycle but also suppresses cell proliferation by impacting the formation of the cell cycle-dependent complex cell division protein kinase 6 (CDK6)/cyclin D1 (CCND1) (33). When located in the cytoplasm, p27acquires oncogenic roles, and its levels in non-small cell lung carcinoma patients appear to be a powerful prognostic marker (34). The deletion of p27 occurs in the early stage of carcinogenesis, and is related to the aggressiveness and metastasis of liver cancer. At the same time, it is also a prognostic marker (35). CDK and cyclin are core factors that endogenously regulate the cell cycle (36). Based on the interaction between p27 and cyclin/CDK, the development of specific cyclin E/cyclin A-CDK2 inhibitors inhibit cell cycle progression, thereby preventing tumor growth and survival (37). In our research, after treatment with propofol, the mRNA and protein expression levels of p27 were notably elevated, while the levels of cyclin A were suppressed. These results suggested that propofol could suppress the HepG2 cell cycle.

AMPK directly promotes autophagy by phosphorylating the autophagy-related proteins in mTOR, Unc-51 like autophagy activating kinase 1 (ULK1), and the phosphatidylinositol 3-kinase catalytic subunit type 3 (PIK3C3/VPS34) complex, or indirectly promotes autophagy by regulating the expression of autophagy-related genes downstream of transcription factors [such as forkhead box O-3 (FoxO3), transcription factor EB (TFEB), and Bromodomain-containing protein 4 (BRD4)] (38). MTOR is a protein kinase that regulates cell growth, survival, metabolism, and immunity. Activation of mTOR promotes tumor growth and metastasis (39). Metformin can induce the levels of DEP domain-containing mTOR-interacting protein (DEPTOR), which intensifies binding to mTOR and exerts a suppressing effect on mTOR signaling in HCC (40). Previous research has shown that propofol suppresses the proliferation, differentiation, and migration of neural stem cells (NSCs), and these functions are partially mediated by the calmodulin-dependent protein kinase (CaMk) II/phosphorylation of serine at amino acid position 485 (pS485)/AMPK/activating transcription factor 5 (ATF5) signaling pathway (41). Importantly, the AMPK/mTOR signaling pathway has been found to be activated in propofol-induced autophagosome accumulation in HeLa cells (42). Medium- and long-chain triglyceride (MCT/LCT) propofol not only significantly promotes the phosphorylation of AMPK and acetyl coenzyme A carboxylase (ACC), but also reverses the free fatty acid (FFA)-induced decreased phosphorylation of AMPK and ACC (43). In our research, the levels of p-AMPKα1, p-mTOR, and p-ULK1 were notably restrained following treatment with propofol compared with the 0 µM propofol group. These results indicated that propofol could restrain the AMPK signaling pathway in HepG2 cells.

Reporting Checklist: The authors have completed the ARRIVE reporting checklist. Available at http://dx.doi.org/10.21037/jgo-20-472

Conflicts of Interest: All authors have completed the ICMJE uniform disclosure form (available at http://dx.doi.org/10.21037/jgo-20-472). The authors have no conflicts of interest to declare.

Ethical Statement: The authors are accountable for all aspects of the work in ensuring that questions related to the accuracy or integrity of any part of the work are appropriately investigated and resolved. All animal experiments were approved by the Quanzhou First Hospital Affiliated of Fujian Medical University and were performed according to the National Institutes of Health (NIH) Guide for the Care and Use of Laboratory Animals.