Incidence and detection of high microsatellite instability in colorectal cancer in a Chinese population: a meta-analysis

The 4 most common types of DNA mutations in tumors are single-nucleotide variations, insertion-deletion, fusion, and copy number variations, which are relatively simple mutations that typically cause abnormalities in the function of 1–2 genes and signal transductions in their pathways. Microsatellite instability (MSI) is the 5th most common mutation in tumors and is defined as an alteration of any length due to either the insertion or deletion of repeat units, named “microsatellites”, within a tumor tissue when compared to normal tissue (1). MSI is a hypermutable phenotype caused by the loss of function of the DNA mismatch repair (MMR) system, which is responsible for repairing DNA mismatch errors that occur during DNA replication. MSI is a more complex mutation. As microsatellites are distributed throughout the entire genome, MSI in different genes will result in the dysfunction of these genes and will affect multiple signaling pathways associated with cancer, leading to the occurrence and progression of MSI-high (MSI-H) tumors.

MSI occurs in various types of cancer, including colorectal, endometrial, gastric, small bowel, ovarian, and prostate cancer. The incidence of MSI-H varies among different cancers, and has been found to be highest in endometrial, gastric, and colorectal cancers (33%, 22%, and 13%, respectively) (2). It also varies among different populations in the same type of cancer; for example, for colorectal cancer, the incidence of MSI-H is highest among Egyptians (37%) and African Americans (20–45%), but lowest among Europeans and Americans (8–20%) (3).

Currently, MSI diagnostic approaches used for human tumors mainly include the polymerase chain reaction (PCR)-based method and next-generation sequencing. Multiplex fluorescence PCR followed by capillary electrophoresis fragment analysis is considered as the international gold standard approach for identifying MSI status in cancer, because of its high-throughput, higher sensitivity and reproducibility. The most critical factor influencing the sensitivity of MSI diagnosis is the loci of the microsatellite markers used. Different MSI diagnostic panels have been proposed for the sensitive detection of MSI, including the 2B3D NCI panel, which has been the gold standard panel for MSI diagnosis since 1997. The NCI panel consists of 2 mononucleotide repeat markers (BAT-25 and BAT-26) and 3 dinucleotide repeat markers (D2S123, D5S346, and D17S250). The classification criteria for MSI status are as follows. When compared to normal tissue, tumors with ≥2 unstable microsatellite markers are defined as MSI-H, those with only 1 unstable microsatellite marker are defined as MSI-low(MSI-L), and those with all 5 stable microsatellite markers are defined as MSS (1). According to previously published studies on Caucasians, the sensitivity of dinucleotide loci showed lower sensitivity than mononucleotide loci; therefore, panels composed of mononucleotides are also widely used in MSI diagnosis, such as the pentaplex panel of 5 mononucleotides (BAT-25, BAT-26, NR-21, NR-24, and MONO-27), which is commercially available from manufacturers, such as Promega (Madison, WI, USA).

However, a comparison of positive rates between the 2B3D NCI panel and mononucleotide panels is lacking for the Chinese or East Asian population. No consensus has been reached on the selection of MSI diagnostic panels in Chinese population due to lack of data support. In the present study, we used the PCR-based approach to analyze different panels for the diagnosis of MSI in the East Asian population, and conducted a meta-analysis based on a comparison between the positive rate of the 2B3D and mononucleotide panels, and tried to find out a panel with better sensitivity in Chinese population in order to provide a clearer guidance for panel selection.

We present the following article in accordance with the PRISMA reporting checklist (available at http://dx.doi.org/10.21037/jgo-20-487).

The inclusion criteria for the present study were as follows: (I) the study type was a cohort study; (II) a definite diagnosis of colorectal cancer; and (III) articles published in Chinese or English. The exclusion criteria were as follows: (I) duplicate publications; (II) review articles, animal experiments, and case reports; (III) studies without full text, studies with incomplete information, or studies where data extraction was not possible; (IV) studies without available incidence of MSI-H; (V) articles without using PCR and capillary electrophoresis; (VI) articles published previous to 2000.

The literature search, screening, and information extraction were completed by 2 researchers independently. If consensus could not be reached, a 3rd researcher was consulted. Data extraction included author, year, type of study, sample size, and clinical indicators.

Two researchers independently used Newcastle-Ottawa Scale (NOS) to evaluate the quality of the literature. If consensus could not be reached, a 3rd researcher was consulted. NOS includes 4 items (4 points) for “selection of research participants”; 1 item (2 points) for “comparability between groups” and 3 items (3 points) for “result measurement”, with a total score of 9 points and ≥7 points high-quality literature, <7 is divided into lower-quality literature.

Stata 15.1 (StataCorp, College Station, TX, USA) was used for the single-group rate analysis on the data. I2 was used to evaluate heterogeneity. If the heterogeneity test showed P≥0.1 and I2≤50%, this indicated that the study had homogeneity. The fixed-effects model was used for the combined analysis. If P<0.1 and I2 >50%, this indicated that the study had heterogeneity. Sensitivity analysis or subgroup analysis was used to find the source of heterogeneity, the sensitivity analysis was performed by excluding the literature one by one. If the heterogeneity was still significant, the random-effects model was used or descriptive analysis. When the number of documents included in a single outcome index was >10, the publication bias of each index was analyzed using a funnel chart and Egger’s bias test.

In total, 1,832 articles were obtained by searching the PubMed, Embase, Web of Science databases, CNKI, Wanfang, CQVIP, and CBM databases. After excluding duplicate articles, 926 articles remained. Article abstracts were browsed and a further 574 articles were included. After reading the full text, we obtained a further 17 articles that could be used in meta-analysis (Figure 1) (Table 1). 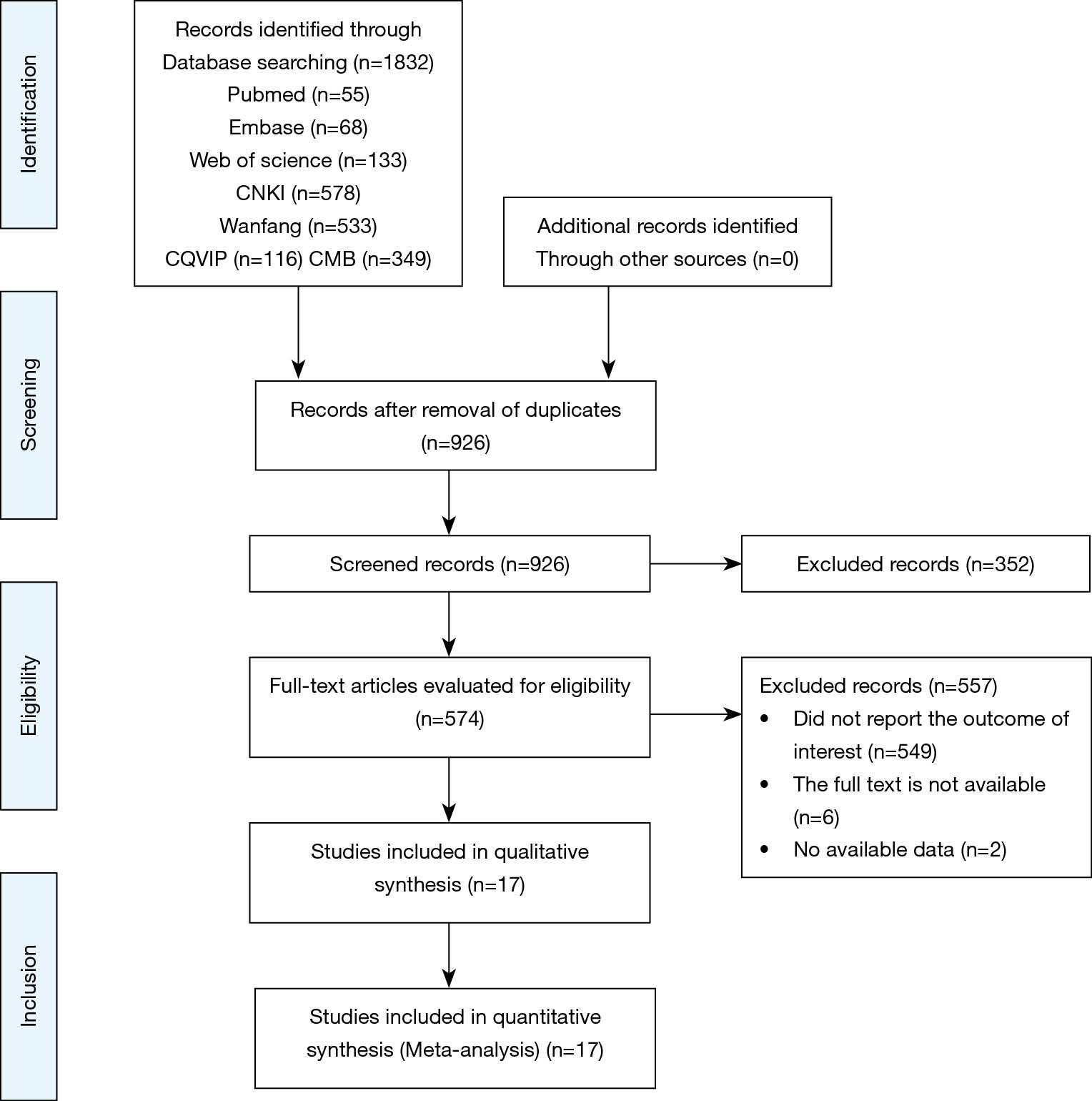 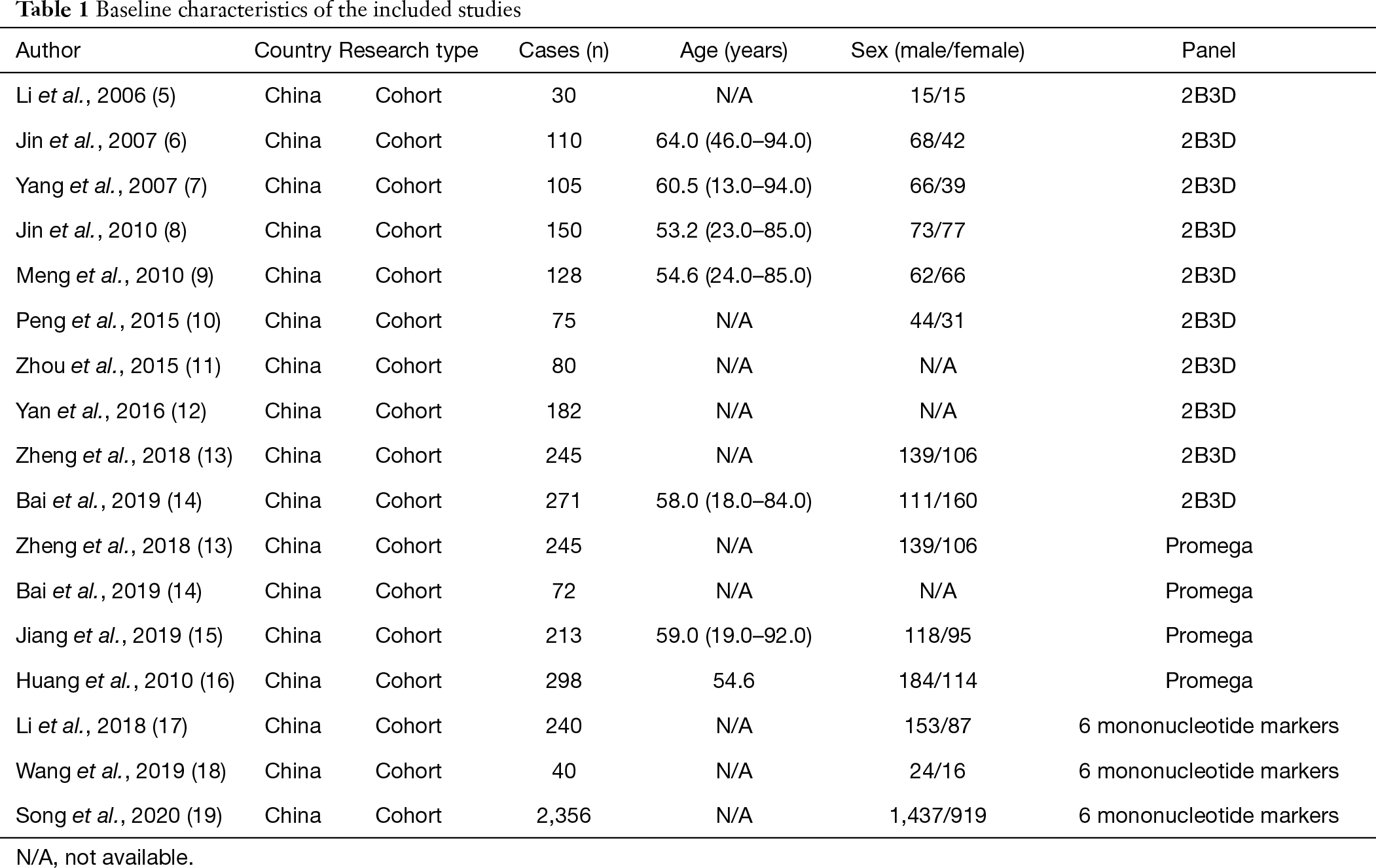 Baseline characteristics and quality assessment of the included studies

The included 17 articles used the NOS scale for quality evaluation. The NOS scores of the included documents were ≥7 points, and the quality of the documents met the requirements (Table 2). 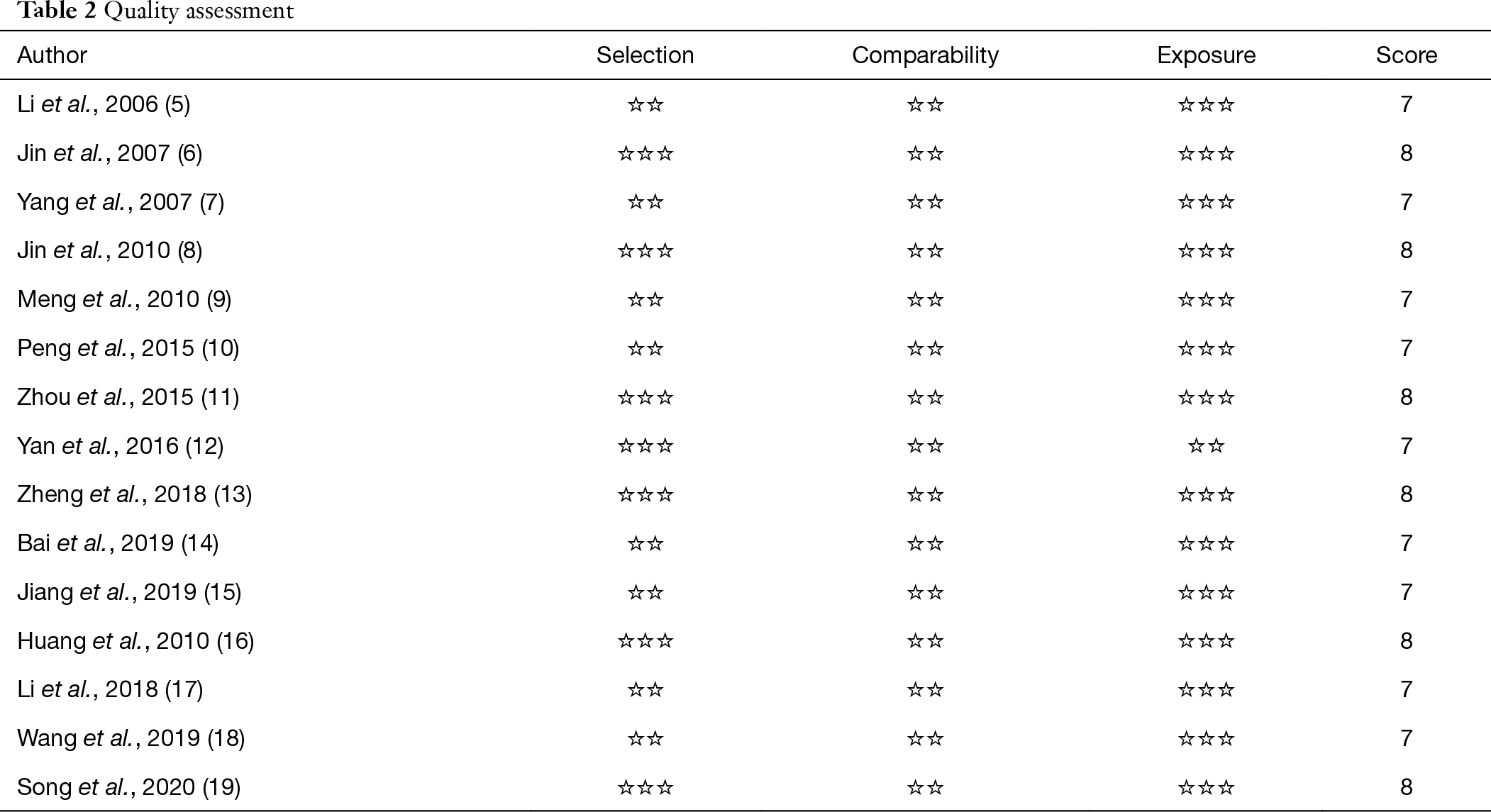 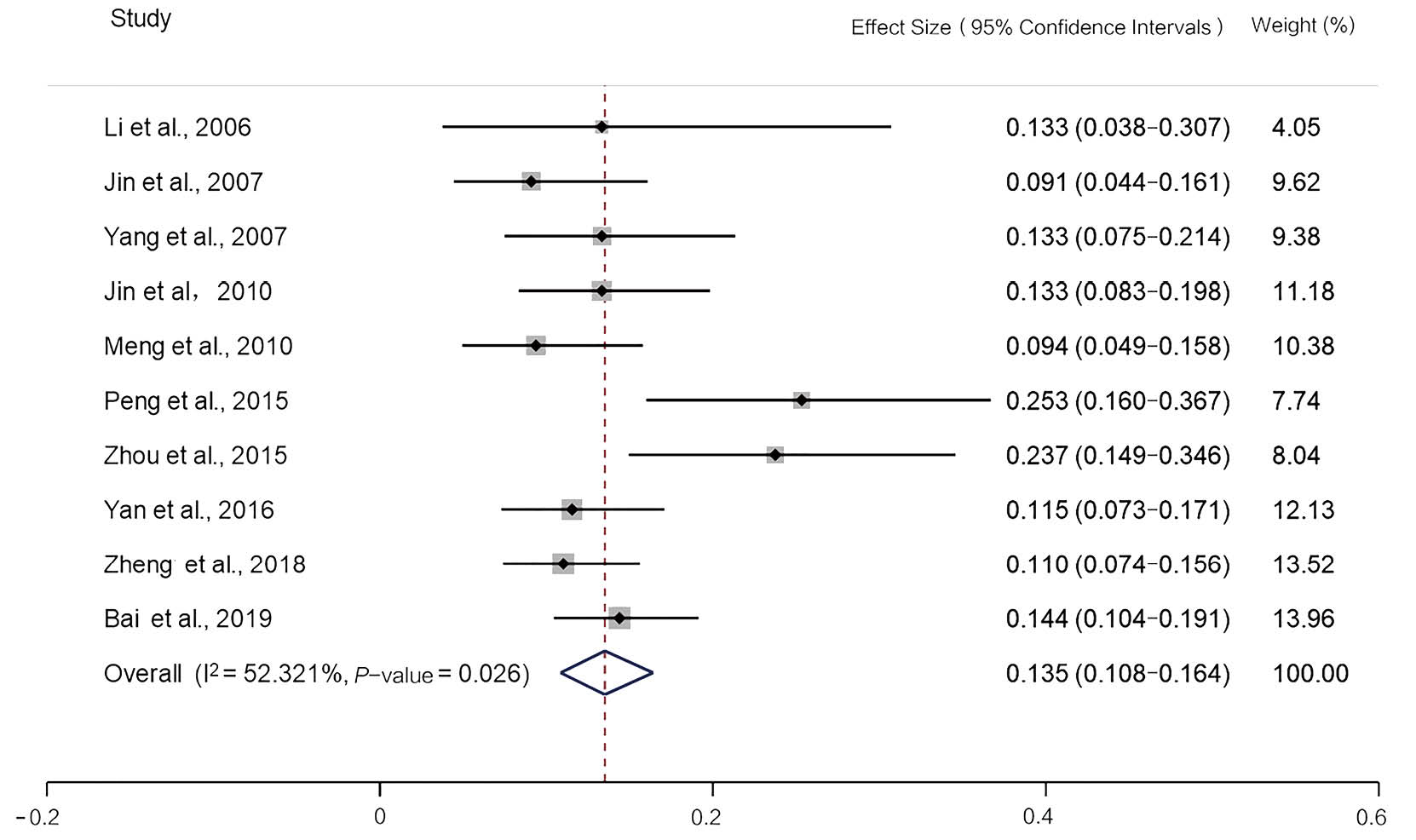 Figure 3 Forest plot of the incidence of microsatellite instability-high, detected by Promega.

Figure 4 Forest plot of the incidence of microsatellite instability-high, detected by 6 mononucleotide markers. 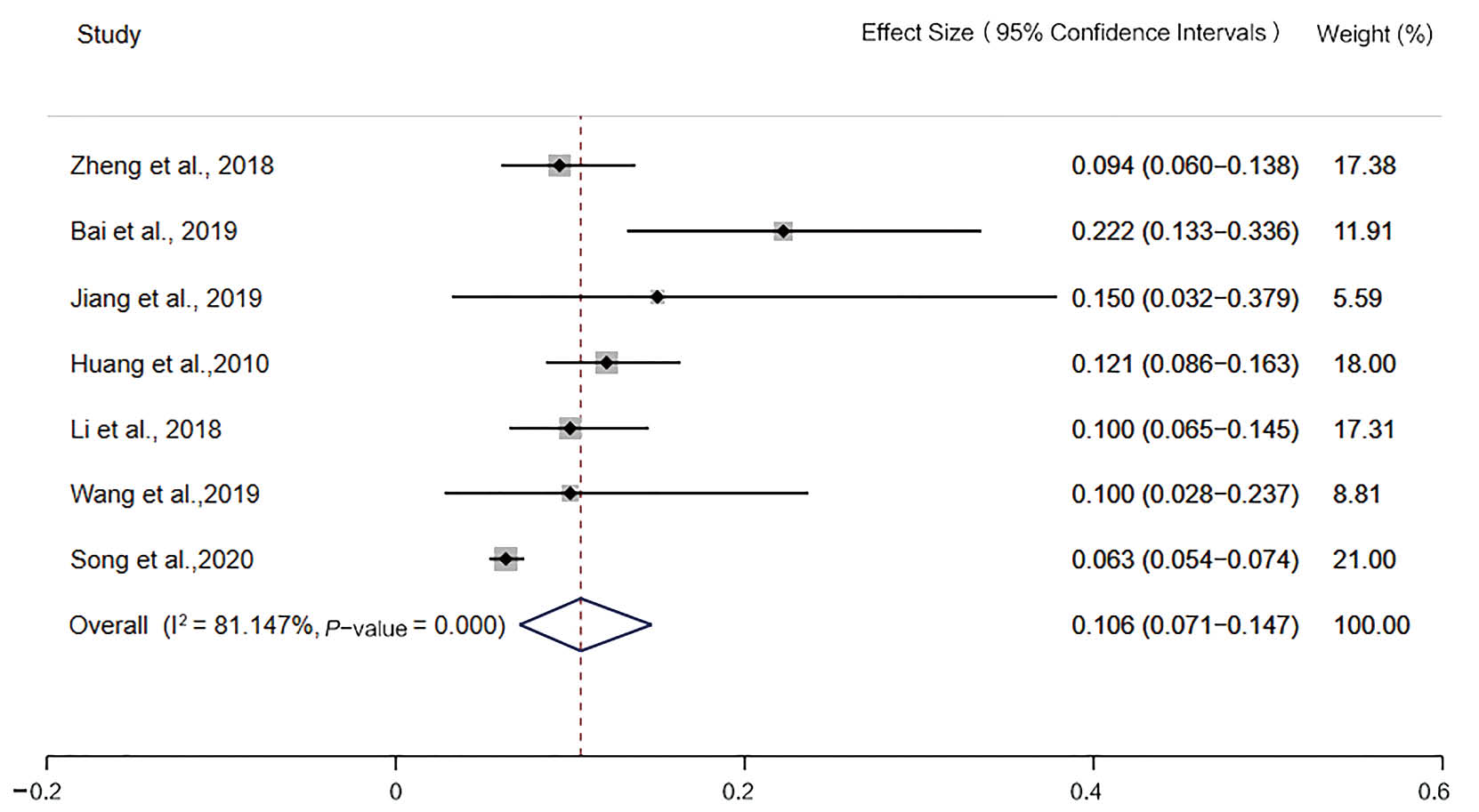 Figure 5 Forest plot of the incidence of microsatellite instability-high, detected by mononucleotide markers.

As shown in Figure 6, based on the results of the Egger’s bias test (P=0.274, >0.05), there was no obvious publication bias in the present study, and the funnel chart was symmetrical.

No studies that had a significant impact on the results were found, suggesting that the results of the present study were relatively stable.

There were approximately 4,292,000 new cancer cases in China in 2015. Based on the incidence of MSI-H in different types of cancer, we estimate that 300,000 new MSI-H cancer cases per year in the Chinese population; this value is comparable to breast cancer [272,400] and colorectal cancer [376,300] (2,4). Despite the severe burden of MSI-H cancer, its role in clinical diagnosis and treatment has been underreported.

The reasons affecting MSI-H incidence vary. First, MSI-H incidence among populations differs; for example, in colorectal cancer, the incidence of MSI-H is highest among Egyptians (37%) and African Americans (20–45%), but lowest among Europeans and Americans (8–20%) (3). In comparison MSI-H, incidence in Chinese patients is about 4.5–15%. Second, MSI-H incidence varies among different stages. MSI-H is more frequent in stage II colorectal cancer (20%) than stage III (12%), and is rare in stage IV (4%) (3). Third, the incidence obtained from different methods or panels composed with different microsatellite markers. The PCR-based method, recognized as the gold standard for MSI detection, has higher sensitivity and specificity than other methods. However, the incidence obtained from panels using different microsatellite markers would also be different. To the best of our knowledge, the present study is the first to compare the incidence of MSI-H in colorectal cancer obtained from panels with different microsatellite markers. The incidence of MSI-H detected by the 2B3D NCI panel in the present study was 13.5% (95% CI: 10.8–16.4, I2=52.321%, P=0.026, n=10 studies including 2,681 participants), the incidence of MSI-H detected by mononucleotide panels was 10.6% (95% CI: 7.1–14.7, I2=81.147%, P=0.000, n=7 studies including 3,249 participants). Therefore, in the Chinese population, the 2B3D NCI panel can detect 27.4% more MSI-H cancers than mononucleotide panels, 54.7% more MSI-H cancers than the panel of 6 mononucleotides, and its sensitivity is comparable to that of Promega.

A number of studies have suggested that the occurrence of MSI-H varies cross different populations (3); therefore, microsatellite marker selection needs to be supported by the clinical data from Chinese population.

The present study has some limitations. First, as it was a single-arm meta-analysis, we were not able to evaluate statistical significance. Second, the inclusion of only published studies might be a potential source of publication bias. Third, grey literature may have reported negative findings. Therefore, our results should be interpreted with caution.

The present meta-analysis demonstrated that the 2B3D NCI panel can detect 27.4% more MSI-H cancers than mononucleotide panels in the Chinese population. Therefore, using the 2B3D NCI panel for MSI detection can avoid the underestimation of the incidence of colorectal cancer and can be considered the most suitable panel for MSI detection in the Chinese population. Future studies with larger sample sizes are needed to confirm this result.

Reporting Checklist: The authors have completed the PRISMA reporting checklist. Available at http://dx.doi.org/10.21037/jgo-20-487

Conflicts of Interest: All authors have completed the ICMJE uniform disclosure form (available at http://dx.doi.org/10.21037/jgo-20-487). The authors have no conflicts of interest to declare.