Understanding epidemiological trends is crucial in combating a global scourge as pancreatic cancer. Among cancers of various organ systems, pancreatic cancer is extremely aggressive with more than 400,000 new cases globally that are diagnosed every year with almost an equal number of deaths annually. Global trends of incidence and mortality due to pancreatic cancer is higher in developed economies with a high human development index (HDI >0.8) than those in developing economies with a low HDI (HDI <0.5) (1). People in countries with higher HDI have better life expectancy; pancreatic cancer being more common in the older age group, incidence of pancreatic cancer is higher in countries with high HDI as shown by Wong et al. (2) (Figure 1). Over the last two decades there has been a substantial reduction in poverty, changes in life-style, improved healthcare literacy in Asian countries leading to improving life expectancy (3). Reporting of health care data has improved as well. Pancreatic cancer has seen a rise in incidence, with 46% of new cases coming from Asia and Australia. 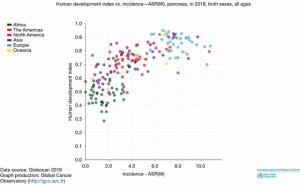 Majority of the pancreatic cancers are adenocarcinomas, with less than 10% being neuroendocrine tumors (4). Most patients with pancreatic adenocarcinomas present with advanced stage due to paucity or non-specificity of symptoms (5). Cure is possible with definitive surgery though it may not be an option for the majority of patients who generally present with advanced disease. Consequently, the observed mortality associated with pancreatic cancer is high (6,7).

We performed a comprehensive search in PubMed and Google Scholar from January 2000 to October 2019, restricting articles that are published in the English language.

Scope of the problem in Asia-Pacific population 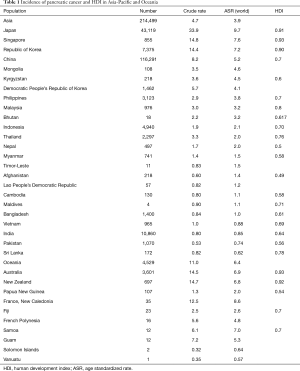 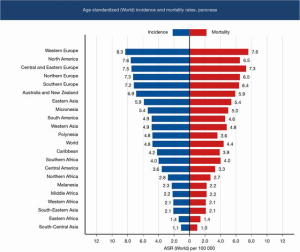 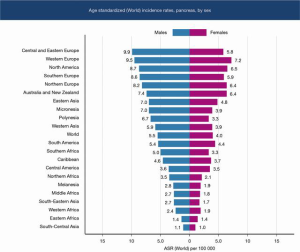 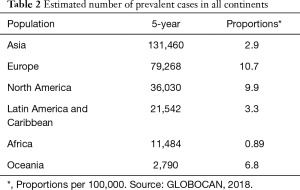 Results from the Asia-Pacific region

Asia is the earth’s largest and most populated continent. With more than 4.5 billion people, it is home to 60% of the population of the world. The Asia-Pacific region includes East Asia, South Asia, Southeast Asia, and Oceania. It has multiple races and ethnicities with a high population density. There is variation in the pancreatic cancer incidence and mortality in the various countries in the continent. There are gaps in the published data as the registries in the Asia-Pacific regions are not comprehensive. In China, the present cancer registries are estimated to cover less than 15% of the country’s population (11,12).

China, followed by Japan and India, accounts for the majority of the new cases of pancreatic cancer (Figure 4). However, when adjusted for population and age standardized rates (ASRs), the incidence, prevalence and mortality in Japan and other advanced economies in the region with high HDI like Singapore and South Korea do worse than China (Table 3). 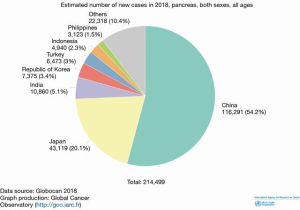 Oceania, which accounts for 40 million people, follows a similar theme for distribution of pancreatic cancer as countries with a high HDI in the western world, having worse incidence, prevalence and mortality rates. The overall crude incidence rate and mortality for Oceania is 11/100,000 and 9/100,000, respectively. Australia and New Zealand having similar crude incidence rate of 14.5/100,000. The mortality rates in Australia and New Zealand are 14.7/100,000 and 12.8/100,000 respectively (Table 4). 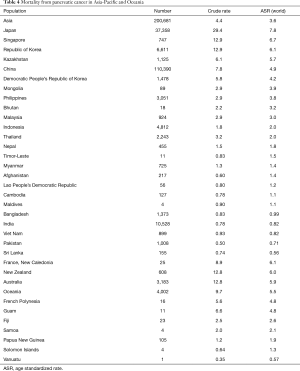 The incidence and mortality of pancreatic cancer has increased over the last five decades in the developed economies (13). Improvement in access to health care and adoption of imaging technologies like magnetic resonance cholangiopancreatography (MRCP) and endoscopic ultrasound have removed hurdles in diagnosing pancreatic cancer and aided preoperative decision making. Unfortunately, there are no early symptoms or signs and no cost-effective screening tools for an early diagnosis. This may partly explain the rise in incidence of pancreatic cancer, without a decline in the mortality. Therefore, a good understanding of the risk factors contributing to the development of pancreatic cancer is warranted.

The RR of pancreatic cancer is highest (RR >2) for those with a history of chronic pancreatitis, idiopathic thrombosis and those with germ line mutations.

Factors like tobacco smoking, diabetes mellitus, family history of pancreatic cancer, and metabolic syndrome confer a moderate risk (RR: 1.5–1.9). The rising prevalence of diabetics coupled with a rise in smoking has been an important factor contributing to the rise of pancreatic cancer in the Asia-Pacific population (8). Obesity, hepatitis B infection, heavy alcohol intake, helicobacter pylori infection, red and processed meat consumption. and history of cholecystectomy and gastrectomy fall in the category of low risk (RR: 1.1–1.4) (15,16).

Ethnicity and genetic factors seem to play a strong role in pancreatic cancer. In the U.S., Asian-Americans and Pacific Islanders seem to have a lower incidence of pancreatic cancer and better survival compared to African Americans and Caucasians (17). Differential expression of Kras and p53 in the Chinese, Japanese and Caucasian population may contribute to the difference in aggressiveness of the tumor. However, dietary habits, smoking and environmental exposure may be the confounding factors (18).

The risk is elevated two-fold if two or more first degree relatives have a history of pancreatic cancer, even after controlling for smoking. However the RRs vary across studies (20). Considering the RRs across various studies, screening people with a family history of pancreatic cancer may be a cost-effective intervention. Unfortunately, the available data on genetic syndromes and familial association in the Asia-Pacific population is limited with some data coming from Japan (21). Targeted screening of individuals with a strong family history or a germline mutation is worth implementing.

The strong association between obesity and cancer is evident through prior data. Pancreatic cancer is no exception (34). Obesity is associated with increased risk of various cancers which is driven by the following mechanisms:

Direct and indirect effects on other cell growth regulators, including mammalian target of rapamycin (mTOR) and AMP-activated protein kinase;

A recent animal study has demonstrated that obesity promotes pancreatic cancer by altering the nitrogen metabolism (35).

Being overweight and being obese in early adulthood independently increases the risk of pancreatic cancer compared to people with normal body weight, as demonstrated by pooled cohort and meta-analysis (14,36-39). Central obesity increased pancreatic cancer risk in the Asia-Pacific population in one study (8).

Diabetes mellitus is extensively studied as a risk factor for pancreatic cancer. Various meta-analysis have demonstrated a strong link between the two, with a greater than 50% risk of pancreatic cancer in people with long term diabetes associated with obesity and poor glycemic control. The postulated mechanisms are the tumorigenic effect of hyperglycemia and growth promoting effects of hyperinsulinemia. In patients with diabetes for greater than 10 years, the RR (95% CI) of PC was 1.50 (1.28–1.75) (46). With a large population of diabetics and undiagnosed diabetics living in South Asia, coupled with increasing obesity, an uptick in cases of pancreatic cancer should be expected (47). A recent meta-analysis in China has reported a > two-fold risk of pancreatic cancer in people who have had diabetes for less than 2 years (48). Metformin when used to manage diabetes is shown to decrease the risk of developing pancreatic cancer.

Prior surgery and pancreatic cancer

Cholecystectomy is one of the most commonly performed general surgical procedures, worldwide. Meta-analyses have demonstrated that it confers a greater than 20% excess risk of developing pancreatic cancer [standardized rate ratio (SRR): 1.23; 95% CI: 1.12–1.35]. This may be due to increase in the secondary bile salt concentration post-surgery as well as an increase in the cholecystokinin levels which may promote the growth of pancreatic cancer (15).

Gastrectomy may increase the risk of developing pancreatic cancer by 50%, especially when the procedure was performed within 2 years of the pancreatic cancer diagnosis. The postulated mechanism is increased H. pylori colonization and N-nitroso amine compound formation, due to the reduced gastric acid production secondary to the procedure (49).

Australia, Japan and China are predicted to see large increases in the pancreatic cancer incidence burden between now and 2040 with Australia slated to have an increase of more than 60% from the current levels (13).

The presence of modifiable risk factors makes policy and interventions feasible in preventing pancreatic cancer. Smoking is a risk factor that is implicated as an agent in several cancers. Unlike lung cancer, where a single factor like smoking is strong implicated, causation of pancreatic cancer is multifactorial. Government policy that is focused on education, financial incentives for a healthy lifestyle, taxation of tobacco products at a reasonable level and adequate support to people who are motivated to quit smoking is likely to help in reducing the risks, although a total elimination may not be possible. With vaping gaining popularity in the younger age group and people trying to quit conventional cigarette smoking, the association between vaping and pancreatic cancer needs to be studied (50,51).

The data on Helicobacter pylori infection as a possible risk factor for pancreatic cancer is not clear (52). Therapy to eradicate infection through antibiotics is likely to eliminate this risk factor and may be useful when the patients undergo an upper gastrointestinal endoscopy for other reasons.

Diet, exercise and awareness about obesity as a risk factor for cancer has the potential to effect change globally, more than any other intervention. Limiting red meat and animal based protein, limiting processed foods and sugar intake by decreasing consumption of carbonated beverages can decrease the prevalence of obesity (53). Obesity which was primarily a problem with developed economies is now a concern in developing middle income countries. With the economic progress in China and India lifting people out of poverty at unprecedented rates, incidence and prevalence of obesity and cancer is likely to follow a similar trajectory.

A concerted effort by governments to put policies in place to decrease or eliminate risk factors will have a meaningful, cost-effective but high impact in the fight against pancreatic cancer. Advances in medical technology and delivering care for patients in high volume centers in these countries will assure good outcome in patients who are able to receive definitive care for pancreatic cancer.

Provenance and Peer Review: This article was commissioned by the editorial office, Journal of Gastrointestinal Oncology for the series “Global GI Malignancies”. The article has undergone external peer review.

Conflicts of Interest: Both authors have completed the ICMJE uniform disclosure form (available at http://dx.doi.org/10.21037/jgo-20-118). The series “Global GI Malignancies” was commissioned by the editorial office without any funding or sponsorship. QC served as the unpaid Guest Editor of the series. The authors have no other conflicts of interest to declare.