In 2013, there were an estimated 142,820 new cases and 50,830 deaths due to colorectal cancer (CRC) in the United States (1). Liver metastases are common among patients with metastatic CRC (mCRC), and while surgical resection of these tumors is the treatment of choice, anatomical factors (such as location or extent of metastatic lesions), inadequate hepatic functional reserve, or comorbidities render approximately 75-90% of patients ineligible for resection (1). For patients with unresectable liver metastases, there are several locoregional liver-directed treatment options available.

One such liver-directed treatment is radioembolization [RE; also termed selective internal radiation therapy (SIRT)] with yttrium-90-labeled (90Y) microspheres (2). This treatment modality utilizes the well-characterized dual vasculature of the liver to selectively deliver radioactive isotopes to liver tumors via the hepatic artery. The feasibility of transarterial 90Y-RE to treat liver metastases was first described in 1965 (3), and since then, there have been numerous published studies of its effectiveness in both primary and metastatic liver tumors (4). In prospective clinical studies, RE with 90Y resin microspheres improved response rates in the liver and extended time to progression and overall survival (OS), relative to chemotherapy alone, in both the first-line and refractory setting (5-8) among patients with mCRC. Metastatic colorectal cancer liver metastases Outcomes after RadioEmbolization (MORE) was a retrospective study designed to evaluate the safety and OS associated with 90Y-RE in patients with mCRC, based on the collective experience of centers in the United States.

This was an investigator-initiated study (clinicaltrials.gov identifier: NCT01815879). Fifteen of the most experienced radioembolization centers using 90Y-resin microspheres in the United States were invited by the principal investigator to participate in this retrospective review, and 11 of these centers accepted. Institution review board exemptions were granted prior to the collection of data at each site. All patients with a diagnosis of mCRC who received at least one radioembolization procedure were followed-up and included in the analyses. Data were collected from source documentation at each site by an independent contract research organization. All patient identifiers were replaced with a unique study number.

Centers were guided by the published consensus from the Radioembolization Brachytherapy Oncology Consortium (REBOC) and other earlier reviews in the selection of patients, pre-treatment work-up and dosimetry (2,9,10). In summary, 90Y-RE was considered for those patients with advanced liver-dominant mCRC who were not suitable for surgery, ablation or systemic therapy, and had progressed or become intolerant to at least one line of systemic therapy (11,12).

The technique and rationale for the various procedures involved with delivering radioactive 90Y resin microspheres (SIR-Spheres; Sirtex Medical Ltd, Sydney, Australia) into the hepatic artery are well described elsewhere (2). It was the treating physician’s preference whether to treat lobar or bilobar disease in a single session. All activity calculations for 90Y were planned using the body surface area methodology as per consensus guidelines. Clinical judgment was used to assess the appropriateness of RE in patients presenting with relative contraindications including compromised pulmonary function, ascites or inadequate liver reserve.

Safety data were collated from the medical records at baseline, on the day of the first 90Y-RE procedure (day 0), and at all subsequent visits or until death. All results from hematologic, liver function and blood biochemistry tests and physical examination were recorded. The nature and severity of all adverse events (AEs) were graded using the National Cancer Institute Common Toxicity Criteria Adverse Events version 3.0 (13). Data were reported on the time and highest grade across each of the following time-points: days 0, 1-7, 8-90 and 91-184 and any time-point. Survival was calculated from the day of the first 90Y-RE procedure to the day of death or last follow-up. Patients were censored at the time of last follow up if their status could not be established.

Summary statistics for continuous variables include the mean, median, standard deviation, interquartile range (IQR), minimum and maximum, and 95% confidence intervals (CI), as appropriate. Categorical data are summarized by frequency distributions with percentage based on non-missing data. Descriptive summaries are provided for baseline patient characteristics, prior chemotherapy history, 90Y treatments and AEs. The association of Grade 3+ AEs or death and lines of prior chemotherapy (1,2,3-6) utilized Fisher’s exact test. Overall and stratified survival were estimated by the method of Kaplan and Meier (14) and the Log rank test was used to assess statistical significance. Univariate Cox proportional hazards models were applied to identify univariate prognostic factors associated with survival and a multivariate proportional hazards model was applied to the statistically significant univariate variables by either Kaplan-Meier or Cox proportional hazards models. The analysis model was constructed based on the maximum number of statistically significant variables. Statistical significance was determined at 2-sided alpha 0.05, and no adjustments were made for multiple comparisons. All statistical analyses were conducted using SAS (SAS, Cary, NC, USA) version 9.2 XP Pro statistical analysis software.

Patient characteristics and prior treatment 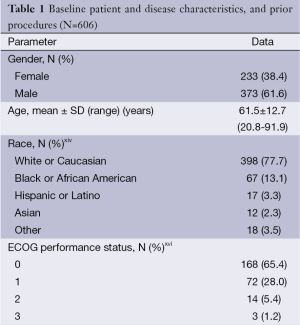 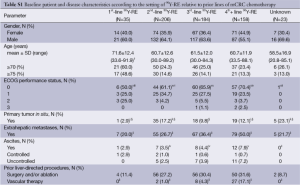 A median of two 90Y-RE procedures (IQR: 1.0) were conducted for each patient. Hospital stay was <24 hours in 97.8% of cases. The treatment volume (whole-liver, lobar or segmental) and design (i.e., sequence of treatments) are outlined in Table S3. Most patients (93.2%) received 90Y-RE as either 1 (49.7%) or 2 (43.6%) procedures, mainly targeting either the whole liver (65.7%) or right lobe (27.7%). For 219 (36.1%) patients who received whole-liver treatment using a sequential lobar approach, 90Y-RE of both lobes occurred within a 10-week timeframe in 84.5% of cases; the right lobe was determined to be the dominant diseased lobe and was treated before the left lobe in 86.7% of cases (see Table S3). Of 179 (29.5%) patients who received initial whole-liver treatment, retreatment of partial or whole liver occurred in 26.8%. The median tumor-to-target-liver ratio for the first 90Y-RE therapy was 15% (IQR: 18%) (see Table S4), while the median overall tumor-to-target-liver ratio considering sequential treatment of bilobar disease and/or subsequent 90Y-RE was 15% (IQR: 21%). Patients received a median of 1.17 GBq (IQR: 0.49) of 90Y activity for the first procedure, which was greater than for any subsequent 90Y-RE procedure. A median of 1.46 (range, 0.11-5.51) GBq of total 90Y activity was delivered to patients across all treatments. Correspondingly, compared to the initial procedure, the median treated liver and tumor volumes were approximately halved (46.8% and 57.3%, respectively) during the second procedure, reflecting the predominant technique of treating whole-liver or right lobe in the first session, and left lobe subsequently. Post-90Y-RE only a minority of patients continued to receive chemotherapy, based on the available data (see Table S5). 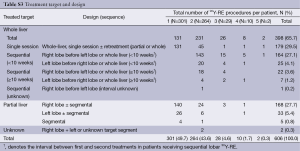 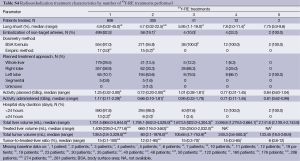 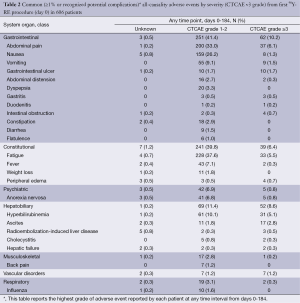 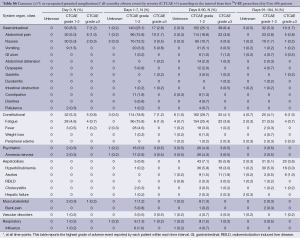 Gastrointestinal ulcerations (all grades: 3.5%) was severe (grade ≥3) in 1.7% of patients and may have contributed to the death of one (0.2%) patient. There were 3 recorded cases among 606 (0.5%) patients of grade ≥3 radioembolization-induced liver disease (REILD) and 2 further cases of grade ≥3 hepatic failure (total 5/606; 0.8%); all events occurred between 8-90 days following the first treatment and all patients subsequently died. More detailed analysis of these patients found that all were Caucasians; none had prior surgery or other liver-directed treatment. 90Y-RE was administered as a single whole-liver treatment (1 patient) or sequential lobar treatment (1 patient); or only to the right lobe (2 of 3 patients with reported REILD). Four of the five patients (including all three patients with REILD) had disease which had advanced beyond the liver to the lungs, as well as one other site (lymph, spleen or bone) in three patients; two patients had ascites at baseline and therefore were outside of the normally accepted eligibility criteria.

Analyses of baseline laboratory parameters revealed that a high proportion of patients had mild-to-moderate (mostly grade 1 or 2) changes before 90Y-RE including: alkaline phosphatase (all grades: 59.3%; grade 3: 3.0%); AST (49.8%; 1.5%), albumin (33.7%; 1.4%) and hemoglobin (40.1%; 0.7%). The proportion of patients with mild asymptomatic increases in hepatic enzymes level rose during the 90 days post-treatment, but these changes were mostly transient. The incidence of any clinically significant grade ≥3 change in liver function tests is recorded in the Table S7. Raised total bilirubin (all grades; all causality including liver progression) was recorded in 6.2% of patients at baseline, increasing to 22.6% of patients by day 90 following the first treatment, with a minority experiencing grade 3 (4.9%) or 4 (2.7%) events at day 90.

Analyses found no correlation between the number of lines of prior chemotherapy and the reporting of severe (grade ≥3) AEs over the 90 days after the first 90Y-RE procedure (P>0.05 by Fisher’s Exact Test). The incidence of all grade ≥3 hepatobiliary events was similar regardless of whether patients had received prior chemotherapy or not (P=1.00). Grade ≥3 events such as fatigue (5.6% vs. 2.9%), abdominal pain (6.5% vs. 0%) and hyperbilirubinemia (5.3% vs. 2.9%) were more frequently reported in patients who had received prior chemotherapy compared to the chemotherapy-naïve sub-group, although the difference was not statistically significant. 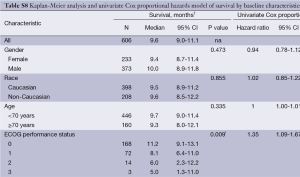 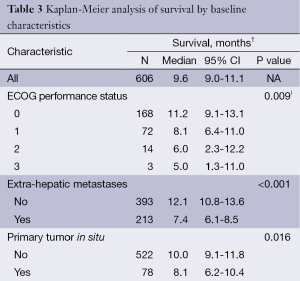 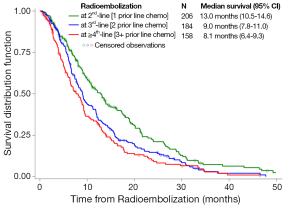 Survival was similar in patients who had received prior liver-directed surgery or ablation compared to those who had not (P=0.067). Survival was also significantly determined by the severity of liver dysfunction before 90Y-RE (Table 3,S8). 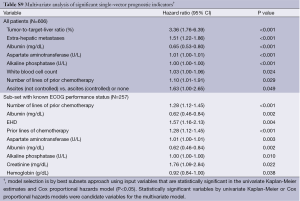 This study describes the risks and benefits of RE using 90Y-resin microspheres in the largest analysis ever conducted in patients receiving RE for any tumor type. The data paint a picture of a cohort of patients who, despite a wide-ranging intensity and duration of prior chemotherapy for mCRC, had a similar stage of disease (i.e., predominately localized to the liver) at the point when treatment with 90Y-RE was initiated. Despite this, we found that differences in the extent of disease in the liver (tumor-to-treated-liver ratio) and beyond (EHD), as well as baseline liver function (as measured by ascites and liver function tests) and extent of prior chemotherapy, all were significant predictors of survival.

Radiation damage (REILD) to normal liver reserve is always a concern and guides careful 90Y activity selection and catheter placement. The incidence of REILD in this cohort is the lowest of any study of mCRC patients to date (5,8,15,16). In the majority of patients, REILD is transient and not fatal; however a few deaths have been reported in patients with progressive liver failure attributed to REILD and not tumor progression (5,8,15,16). The etiology of REILD is not known, with contradictory evidence published regarding increased risk related to: volume of liver irradiated, total activity of radiation delivered, prior partial hepatectomy, prior ablative liver therapy, and amount of prior chemotherapy exposure. The Pamplona group have shown that multiple lines of prior chemotherapy is a risk factor for REILD; however, analyses of our data found no correlation between the number of lines of prior chemotherapy (nor any one chemotherapy regimen) and the incidence of severe (grade ≥3) AEs after 90Y-RE (17,18).

Median survival following 90Y-RE was 13.0 months in the 2nd-line setting after chemotherapy which compares well to similar patients receiving 2nd-line chemotherapy combined with aflibercept (median 13.5 months) (19), and bevacizumab beyond progression (median 11.2 months) (20). The median survival of 9.0 and 8.1 months following 90Y-RE in patients with 2 or ≥3 prior lines of chemotherapy, respectively, in this study compares favorably with patients treated in a similar setting using regorafenib or placebo (median 6.4 vs. 5.0 months) (21). The data also point to a sub-cohort of long-term survivors who had already survived a median of 25.6 months (and had received a median of ≥3 lines of chemotherapy) since diagnosis of mCRC and were still eligible for 90Y-RE. Although twice as likely to have metastases beyond the liver and adverse prognostic clinical markers such as ascites and elevated alkaline phosphatase, these patients remarkably survived a median of 8.1 months after 90Y-RE (i.e., a median OS of 34 months since diagnosis of mCRC compared with a median survival of 24 months since diagnosis of mCRC in patients who were at a similar stage of disease after one line of chemotherapy). These differences can be attributed in part to the tumor biology of the patients selected as candidates for this treatment.

In conclusion, the evidence from this study show that even among patients who were heavily pre-treated, 90Y-RE appears to have a favorable risk/benefit profile and offer clinicians a more targeted approach for the management of liver-dominant mCRC.

We would like to thank Mark Van Buskirk for his outstanding statistical work and advice; and Rae Hobbs for her editorial assistance.