A 53-year-old male with multiple myeloma was admitted to Duke University Medical Center in December 2013 with worsening diarrhea, fatigue, nausea and anorexia. He had previously undergone autologous stem cell transplant a year and a half prior to presentation, with subsequent allogeneic stem cell transplant 14 months prior to presentation. His post stem-cell transplant course had been complicated by graft versus host disease affecting the skin, gastrointestinal tract, and liver. Three weeks prior to presentation, he underwent a skin biopsy that was interpreted as favoring graft versus host disease. Because of the skin biopsy results, he was placed on prednisone 100 mg twice daily, which was tapered to 80 mg twice daily one week prior to admission. Shortly thereafter he developed the above symptoms of diarrhea, fatigue, nausea and anorexia that prompted his admission. Admission labs were notable for a mild thrombocytopenia (110×109/L) and mild leukocytosis (13×109/L) with a mild hyponatremia (131 mmol/L) and abnormal liver chemistries of ALT 630 U/L, AST 195 U/L, alkaline phosphatase 252 U/L, bilirubin 2.1 mg/dL, and albumin 2.1 g/dL. He and was started on total parenteral nutrition and intravenous solumedrol for presumed graft versus host disease. Admission chest radiograph showed new hazy bilateral pulmonary opacities. The chest radiograph findings prompted a CT scan of his chest that incidentally demonstrated a new mass in the gallbladder (Figure 1). Surgical consultation recommended observation and treatment of his graft versus host disease with possible interval cholecystectomy due to his acute illness. Subsequently an abdominal MRI was obtained and again demonstrated a 1.9 cm thick circumferential enhancing mass involving the neck and body of the gallbladder. Eleven days following admission, he underwent an EUS, which showed an irregular heterogeneous mass that appeared to fill the entire gallbladder and measured 37 mm × 23 mm in maximal cross sectional diameter. There was sonographic evidence suggesting invasion into the gallbladder wall as manifested by intraluminal growth (Figure 2). FNA was performed using a transduodenal approach with a 25 gauge Wilson-Cook Echotip Procore ultrasound biopsy needle. The cytopathology specimen was diagnostic of a plasma cell neoplasm, showing morphologically atypical plasma cells (Figure 3). These cells were positive by immunohistochemistry for CD138 (Figure 4), MUM-1, and kappa light chain (weak), and negative for CD56, CD79a, CD20, CD3, lambda, and CD5. 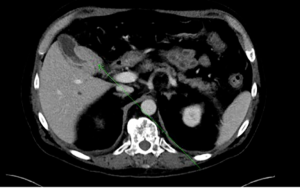 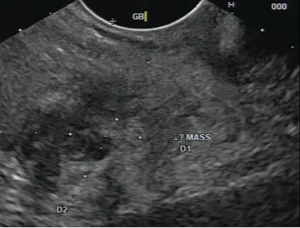 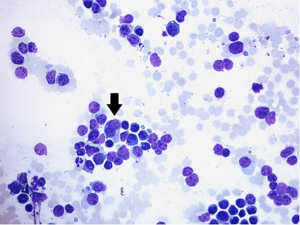 Figure 3 The smears performed on the EUS-FNA specimen were composed of a monotonous population of dyscohesive atypical plasmacytoid cells (arrow) (Diff-Quik stain, 400×). 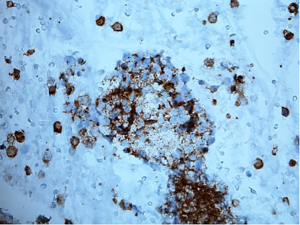 Figure 4 The plasmacytoid cells were reactive with an immunoperoxidase stain for CD138, which is a plasma cell marker (400×).

The decision was made to start radiation therapy (2,400 cGy in 8 fractions) since the patient had developed cholangitis and was not a surgical candidate. Follow up imaging with MRI and EUS demonstrated a decrease in size of the mass following radiation.

Extramedullary spread of PCM is traditionally a rare occurrence, but is becoming increasingly more common due to increased imaging and improved survival in myeloma patients (2). Nevertheless, involvement of the gallbladder is quite uncommon, and limited to sporadic case reports only. Heckmann et al. describe a 70-year-old man with PCM who underwent abdominal ultrasound and had multiple hypodense liver lesions and hyperdense polypoid masses of the gallbladder that developed into concentric wall thickening 5 weeks later on abdominal CT; histologic diagnosis was confirmed by liver biopsy, but tissue was not obtained from the gallbladder mass (5). Schuster et al. report a 66-year-old man with a history of solitary plasmacytoma who presented with acute cholecystitis and was found to have metastatic infiltration of the gallbladder by an extramedullary plasmacytoma (EMP) on cholecystectomy specimen (6). Hwang et al. describe a 63-year-old woman with CBD obstruction who underwent cholecystectomy with lymph node dissection and was found to have gallbladder plasmacytoma, but no evidence of underlying PCM on bone marrow biopsy; she received six cycles of CHOP and was disease free at 8 years (7). Likewise, Majerović et al. and Kondo et al. report cases of gallbladder plasmacytoma that were treated surgically and showed no evidence of recurrent disease or of underlying PCM (8,9). The association, or lack thereof, with underlying PCM is important, for while PCM complicated by EMP carries a poor prognosis, EMP that does not occur in conjunction with underlying myeloma is a biologically different disease with indolent clinical course (2).

In conclusion, we have described a case of EMP of the gallbladder associated with underlying PCM. This is the first case of which we are aware to have been diagnosed using EUS and the first to be confirmed by cytopathologic analysis. The disease can manifest as acute cholecystitis, biliary obstruction, or be asymptomatic as is the case in our patient. While treatment of EMP is traditionally surgical, we demonstrated successful disease control using localized radiation therapy. In patients with better functional status, surgical resection plus adjuvant chemotherapy or autologous stem cell transplant also seem to be reasonable options.