Cervical esophageal carcinoma (CEC) is an uncommon malignancy (1). Few studies have independently examined CEC patients owing to their rarity, often grouping these patients with hypopharyngeal or more distal esophageal tumors. In spite of this scarcity, the medical literature supports the use of definitive chemoradiotherapy (CRT) for these lesions (2-5), providing similar survival rates to primary surgery without the associated morbidity and mortality of concomitant laryngeal and esophageal resection with reconstruction (6,7).

While contemporary studies have demonstrated the positive prognostic impact of human papillomavirus (HPV) infection in oropharyngeal cancer patients, few studies have examined the impact of HPV infection in esophageal carcinoma (8). HPV infection appears to increase the risk of esophageal squamous cell carcinoma (SCC) (9), although some evidence suggests that HPV infection in esophageal tumors is uncommon and may not correlate with anatomical location within the esophagus (i.e., upper versus lower esophagus) (10). To our knowledge, no study has specifically examined the association of cervical esophagus to HPV status, where infection risk may be higher than distal esophageal cancer lesions. Similarly, no study has examined the prognostic importance of tumor HPV infection on long-term outcomes in esophageal cancer at any tumor location. This study focuses on long-term outcomes for patients treated with definitive CRT for CEC, the incidence of tumor HPV status in CEC, and its potential impact on patient outcomes.

Institutional Review Board (IRB) approval was obtained to identify patients with carcinoma of the cervical esophagus treated with curative-intent CRT at Duke University Medical Center (DUMC) between 1987 and 2013. Radiographic and endoscopic data were independently reviewed by two authors (EBL and BGC) to select those patients with tumors whose epicenter was in the cervical esophagus (between the upper esophageal sphincter and the thoracic inlet). Consensus identified 63 patients with CEC (Figure 1). Of these, eight patients (12.7%) presented with metastatic (M1) disease at diagnosis and were excluded from this study; similarly excluded was one patient (1.6%) who presented with a synchronous metastatic malignancy from a primary breast adenocarcinoma. Also excluded were 13 patients (20.6%) who underwent definitive surgical treatment (esophagectomy), and 2 patients (3.2%) who were treated with palliative chemotherapy alone. Of the 39 patients (61.9%) treated with CRT, 2 patients (3.2%) were treated with palliative intent and were excluded, leaving 37 patients (58.7%) treated with curative-intent CRT included in this study (Figure 1). 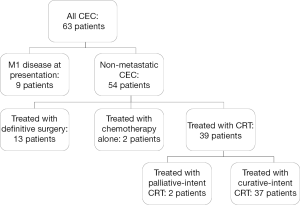 Staging was performed using the 2010 AJCC staging criteria based on radiographic and endoscopic data (esophagoscopy, accompanied by biopsy, endoscopic ultrasound, and bronchoscopy in most cases) (12). Radiographic studies usually included a combination of neck/chest CT, PET/CT, and barium swallow studies.

Loco-regional failure was defined as recurrence at the primary tumor site or regional lymph nodes, including cervical and supraclavicular basins. For loco-regional control (LRC) and distant control (DC), patients were censored for death or at last follow-up. Disease-free survival (DFS) was calculated from the end-date of definitive CRT to the date of first failure or death. Overall survival (OS) was calculated from date of initial diagnosis to date of death.

Immunohistochemistry and chromogenic in situ hybridization (ISH) were performed on available, formalin-fixed, paraffin-embedded tissue samples obtained from the pathology archives. Immunohistochemical staining (IHC) for p16 was performed using the Bond III autostainer (Leica). The pre-dilute antibody (clone 9517, MTM Labs) was used with epitope retrieval for 10 minutes in a citrate buffer. Detection was accomplished with the Leica Refine® polymer system and visualization of the immune complex utilized diaminobenzidine as the chromogen. In the ISH assay, the GenPoint Tyramide Signal Amplification Kit (Dako) was used as specified by the manufacturer in conjunction with the HPV 16/18 oligonucleotide DNA probe (Dako). Pathological studies (p16 IHC and HPV 16/18 ISH) were evaluated and graded as positive or negative by a pathologist specializing in gastrointestinal oncology. Equivocal cases were graded based on consensus of two pathologists.

Two patients were identified with a primary lesion in the cervical esophagus synchronous with another smaller lesion in the proximal thoracic esophagus. In both cases, clinical, endoscopic, and pathological judgment suggested the smaller lesions represented skip lesions from the primary lesion, and both patients were staged as having T3(m) disease; the distance between the two lesions in both cases was less than 4 cm.

All patients received definitive CRT; total radiation dose ranged from 14.4 to 71 Gy, with a median radiation dose of 54 Gy (Table 1). All chemotherapy regimens were platinum-based, but varied with regards to the addition of other agents including 5-FU, paclitaxel, and etoposide (VP-16) in the treatment regimen (Table 1). No patients received brachytherapy. Of note, one patient expired during treatment secondary to CVA, after receiving 14.4 Gy and one cycle of CDDP/VP-16; this patient was included in outcomes analysis below unless otherwise specified.

Although no patients underwent definitive surgery, four patients had surgery related to their esophageal cancer. One patient, diagnosed at age 27, initially underwent local excision for suspected leiomyoma, which was then followed by definitive CRT when pathology demonstrated the lesion to be SCC. Three patients underwent surgery following completion of definitive CRT for enlarging neck masses (suspected recurrence), with only one revealing carcinoma.

Tumor samples were available for HPV analysis in 19/37 (51.4%) of patients; all samples were from patients with SCC, and characteristics of patients undergoing HPV pathological analysis are shown in Table 2. High-risk HPV (types 16 and 18) ISH revealed positive HPV tumor infection in one patient (1/19, 5.3%). All but one of the tumor samples tested for high-risk HPV were also tested for p16 overexpression (n=18); p16 overexpression is a positive prognostic factor in oropharyngeal cancers and has been correlated with tumor HPV positivity (14,15). Tumor samples from three patients (3/18, 16.7%) were positive for p16, including the sole HPV-positive case. Log-rank tests revealed no statistically significant effect of p16 status on outcome, although p16-overexpressing tumors trended to better outcomes (p16+ vs. p16– median survival: 80.2 vs. 26.7 months, P=0.37). 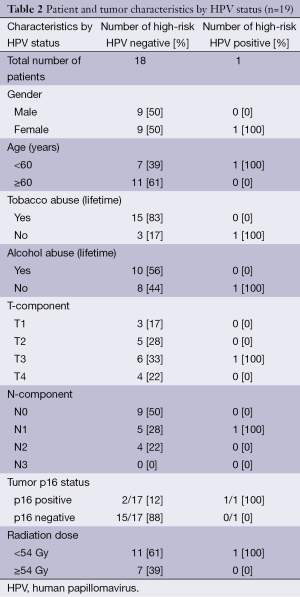 This study provides long-term outcomes data for CEC patients, and represents the first attempt at characterizing the incidence and prognostic impact of HPV tumor infection in a specific anatomical compartment of the esophagus. Given the involvement of HPV in oropharyngeal SCC, investigators have postulated an ‘anatomical gradient’ may exist in the esophagus, such that rates of HPV tumor infection in esophageal SCC would be higher in the proximal esophagus (8,10). This study represents the first attempt at testing this hypothesis by examining HPV infection rates within SCC lesions of the cervical esophagus. While our data are limited by small sample sizes, the CEC HPV infection rate identified here (5.3%) is consistent with several studies showing <10% HPV SCC infection rates throughout the entire esophagus, particularly in geographical areas of low esophageal SCC HPV prevalence including North America (9). Our data add to the growing body of evidence suggesting that an anatomical gradient of HPV infection within the esophagus may not exist (10).

With previously published data from other sites in the upper gastrointestinal tract, our data also serve to enhance anatomically-precise mapping of tumor HPV involvement. Oropharyngeal SCC tumors appear to have high rates of HPV infection (over 50%) (8), whereas hypopharyngeal and cervical esophageal lesions appear to have lower rates of HPV infection (10.9% and 5.3%, respectively) (16). Thus an anatomical map of HPV SCC infection suggests a steep drop in viral infection rates at sites distal to the oropharynx, including the cervical esophagus.

The conclusions with respect to the impact of HPV tumor infection in CEC are taken with caution, given the limitations in sample size. However, the literature from head and neck (H&N) SCC lesions provides some guidance with respect to our data. The positive prognostic role of HPV in H&N SCC lesions is established, and ongoing randomized clinical trials are now underway to evaluate the role of therapy de-escalation in HPV-positive H&N SCC lesions owing to their increased treatment responsiveness (17). With these data in mind, our study provides initial evidence regarding the incidence and prognostic impact of HPV infection in CEC SCC; however, larger studies are required to more definitively address etiological questions of HPV infection in CEC.

Our study represents one of the largest CEC studies with long-term follow-up to date and adds to a growing literature supporting the use of definitive CRT to treat CEC. Primary surgical treatment of CEC confers 5-year OS rates from 14% to 31% (18-22), while definitive CRT for CEC tends to provide similar if not improved outcomes based on a number of studies, without the associated surgical morbidity. Of note, we chose not to include the 13 patients treated with definitive surgery for CEC at our institution (Figure 1) for any comparative analyses. The basis for this decision was that this group of patients is quite heterogeneous, and might not be directly representative of surgically-treated CEC patients for a number of reasons: (I) treatment strategies among these patients varied including adjuvant chemotherapy, induction CRT, and other therapies; (II) surgical technique for esophagectomy varied between patients; and (III) most of these patients were treated >15 years ago. The 5-year OS rate for these patients was 7.7%, well below the range of 5-year OS rates cited above for surgically-treated CEC patients.

Regarding the potential limitations of definitive CRT versus surgery, Tong et al. (19) suggested that salvage surgery might be required in a substantial fraction of CEC patients treated with definitive CRT. This claim was based on their experience, where 5/21 CRT-treated patients (23.8%) required salvage pharyngo-laryngo-esophagectomy (PLE). Our study, however, points toward a more limited role for surgical salvage in this population. Three patients (8.1%) underwent regional surgery for presumed neck failure, with only one demonstrating local failure; none required PLE with associated permanent tracheostomy. Other late effects of CRT were also fairly limited, with three patients (8.1%) developing chronic esophageal strictures (two requiring regular esophageal dilation and one requiring PEG placement). While the role of salvage PLE for loco-regional failure requires further study, the present series demonstrated outcomes comparable, if not improved, to those achieved by primary PLE, without high rates of late effects such as esophageal stricture.

Another proposed approach for primary CEC treatment is definitive radiotherapy alone, as recently published by Cao et al. (18). In this study, the majority (69.6%) of patients was treated with definitive radiotherapy and the remainder treated with combined CRT. The authors concluded that higher radiation doses (≥66 Gy) provided significantly improved 2-year survival. By contrast, both the present study and a recently-published analysis on definitive CRT for CEC found no significant differences in outcomes based on radiation dose (6). These data are consistent with the RTOG 94-05 study, wherein no improvements in outcomes were identified in esophageal cancer patients treated with 64.8 vs. 50.4 Gy (23). The value of definitive radiotherapy alone remains unproven; it is possible that higher radiation doses in the absence of concurrent chemotherapy result in improved outcomes. However, given that a prior randomized trial demonstrated the superiority of CRT over radiation alone in treatment of esophageal cancer (24), we recommend definitive CRT as the most appropriate treatment option in selected CEC patients.

In summary, our study supports existing evidence for the use of CRT for CEC. Given the rarity of this lesion and the limited patient numbers along with poor overall outcomes, further investigation of novel therapeutic approaches is warranted. While our study provides an initial glimpse into the role of HPV tumor infection in CEC, larger studies are required to determine the etiological role of HPV infection in subsets of CEC cases. Further understanding of the therapeutic implications of CEC HPV tumor status may allow treatment personalization for this uncommon malignancy.

The authors thank David N. Howell for assistance in grading equivocal pathological cases, Robert W. Clough for assistance with data collection, and the Department of Radiation Oncology, Duke University Medical Center, for support of this work.

Funding: This work was supported by the Department of Radiation Oncology, Duke University Medical Center.