The impact of the open-access status on journal indices: oncology journals

It is almost a fact that number of publications in a field represents the main part of a research process, and when combined with the number of citations, it will represent the best indicator of the scientific performance (1). During the last decades, advancement of technology in recent years and the emergence of indexing services eased the way of measuring the productivity of a country, an institution, or a discipline, in terms of journal publications (2). Currently, the most commonly used literature databases are the Scopus and Web of Science for almost all disciplines (3). Scopus is the database that covers more journals than the other services (4).

Open access (OA) journals mean the removal of barriers (such as cost of subscription barriers) from accessing scholarly work, where journals make published articles immediately freely available on their website, a model mostly funded by charges paid by the author (5). In the past years, the publishing of OA journals was extensively studied in many fields. Previous studies found that the OA proportion of increased from 27% in 2006 to 50% in 2010, and they found that open-access journals were the most common source of OA articles throughout this period (6,7). There is a clear evidence that publishing openly without cost for readers is associated with higher impact, through number of reads and citation rates (8,9).

The field of oncology is among the highest productive fields in medicine (10), and its journals being among the highest-impact in all journals (11). An example would be the Ca-Cancer Journal, the journal with the highest impact in all journals according to journal citation report (12). Another advantage for the field of oncology is the presence of major funding bodies that support its research (13), an advantage that allowed the emergence OA publishing to be easily accessible, through funding the cost of OA publishing. In this study, we aim to study the open-access status of oncology journals and the impact of the open-access status on journal indices. Moreover, we will assess the research output and journal metrics among oncology journals.

For each journal, we extracted the following variables for the 2017 report:

We used SPSS version 22.0 (Chicago, USA) in our analysis. We used mean (± standard deviation) to describe continuous variables (i.e., journal indices). We used count (frequency) to describe other nominal variables (i.e., publishers and OA journals). We performed Mann-Whitney to analyze the difference between measurements and OA status, and we presented data in median (25% to 75% quartiles). To analyze OA journals between oncology and medicine, we used weighting cases function in SPSS and we analyzed them using Chi-square test. All underlying assumptions were met, unless otherwise indicated. We adopted a P value of 0.05 as a significant threshold. 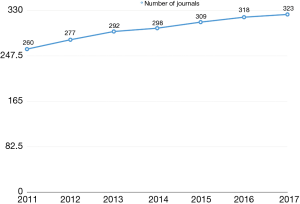 Upon analyzing the difference between oncology OA and non-OA journals, we found significant differences in three main indices (Figure 2):

Figure 2 The difference in percent of articles cited (A), scholarly output (B), and source normalized impact per paper (SNIP) (C) between open access (OA) and non-OA oncology journals. 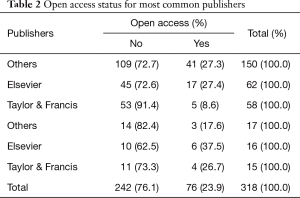 Table 3 A comparison between the five highest-ranked OA and non-OA journals according to SJR index. Impact factors were taken from 2016–2017 journal citation report (JCR 2017)
Full table 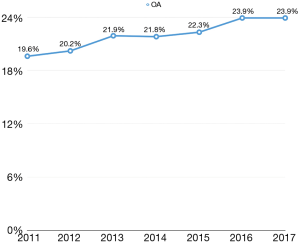 Figure 3 The percentage of open access (OA) oncology journals between 2011 and 2017.

A study that analyzed the most-cited research papers in oncology revealed that the 5 journals that published most of these most-cited papers (around 47%) were non-OA journals (18). These findings are consistent with ours, as we found that the 5 highest rank journals in oncology were non-OA journals. On the other hand, we found that OA oncology journals have higher proportion of the documents that have received at least 1 citation (i.e., percent cited), and higher SNIP, a sophisticated metric that intrinsically accounts for field-specific differences in citation practices, compared to oncology non-OA journals. The exact effect of OA on citations in general is previously discussed, where several authors concluded that the relation of OA status of a journal and the citation it receives varies between disciplines (19), and that the effect of publishing as an OA in healthcare discipline resulted in more citations than other disciplines (16). A journal level analysis also revealed a strong association between downloads and citations for each journal, a relation that is expected to be more prominent in OA journals (20). Gargouri et al. study confirms the fact that OA independently and significantly correlate with increase in citations, even when we control the independent contributions of many other salient variables (article age, journal impact factor, number of authors, number of pages, number of references cited, Review, Science, USA author) (21). Schloegl and Gorraiz found a strong acceleration in the use and downloaded from oncology journals between 2001 and 2006, which is also correlated with an increase in citations for oncology journals (20). An analysis of the representation of oncology articles in general medical journals revealed a high representation in prestigious medical journals, with almost 25% of all publications in the 20 most prestigious medical journals were oncology publications, most of which were non-OA journals (22), which is also an indicator of fast paced development in oncology compared to other specialties.

We believe this study has several limitations. The publishing model discussed here is the gold OA, where the journal makes the article openly available at its website, and the author has only the option of publishing in an OA model. The other form of publishing known as hybrid model, where journals provide the option for author to publish in either OA or not (23), was not discussed here.

We believe that the advancement of science is the responsibility of scientist who should publish their work as open as possible, however funding bodies should be encouraged to support the cost of OA publishing, and the publishers should lower the article processing charges to attract authors toward OA publishing. Elsevier as one of the major publishers should increase the number of its OA journals, especially in the field of oncology, as two of the top five non-OA journals (i.e., The Lancet Oncology and Cancer Cell) are Elsevier journals.