At the beginning of the modern BT era most BT implants have been carried out manually. At first catheters, hollow needles or applicators were inserted into the palpable tumor. Later on, BT sources were manually introduced into the previously implanted applicator. Up-to-date remote afterloading machines are now in use. A single miniaturized source connected to a steel wire moves step by step through the applicator, steered by an individual computer program to achieve the calculated volume dose distribution. An advantage as the steep dose fall-off around the source makes it possible to individually increase the tumor dose and to spare the surrounding normal tissue. Short overall treatment time (OTT) also makes BT attractive for patients. The most frequently applied BT methods are high-dose-rate (HDR) BT, low-dose-rate (LDR) or pulsed-dose-rate (PDR) BT. These methods are characterized by the different dose rates delivered by the radiation sources (LDR/PDR: 0.5-1 Gy/h; HDR: >12 Gy/h). The isotope Iridium-192 (Ir192) is commonly used for remote afterloading procedures. Application forms are contact BT, intracavitary-, intraluminal- and endovascular implantations as well interstitial BT. Interstitial BT is an invasive procedure and requires local or general anesthesia. The use of image guided and adapted BT allows a better target volume definition and improves the quality of implants. 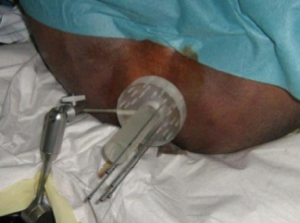 CT or MRI based implants are possible alternatives, but limited by high technical effort, or by MRI-suitable equipment and lack of real time treatment planning (Figure 3).

The Kiel Group published the results of the first 50 pts treated with a TRUS-guided interstitial HDR-boost in 2005. After an EBRT dose of 45 Gy a dose of 2×4 Gy was applied within 6 weeks after EBRT. The 5-year OS was 74% and the disease specific survival DSS was 82%. Ninety two percent of the pts demonstrated a CR after finishing the treatment. Only three pts had an incomplete or absence tumor response (9). An updated analysis from Kiel described 104 pts with a mean follow up of 10 years. Local control was 89% (93/104) and OS was 93% (96/104). In a subgroup analysis the authors analyzed the pts regarding to pre-planned TRUS—guided implants versus real-time—planning implants. The CSS was 91.5% for the real-time planned group and 86% for the pre-planned group (20).

Only a few data are available comparing the acute and late toxicity of EBRT and BT boost. In a subgroup analysis of a retrospective single-institution study, Oehler-Jaenne et al. analyzed pre-planned TRUS—guided implants versus real-time—planning implants (19). Severe diarrhea was seen in two patients treated with BT boost and in three patients treated with EBRT boost. Chronic proctitis grade >2 was seen in 19% (BT boost) vs. 32% (EBRT boost) and incontinence grades I, II in 18% (BT boost) vs. 28% (EBRT boost). The analysis of Saarilathi et al. compared IMRT verus 3D CRT. Thirteen of twenty-two patients in the IMRT group experienced grade II GI toxicity. In the 3D CRT group, 22/39 had a grade II and 12/39 had a grade III GI toxicity. For the perineal mucosa and skin 4/20 in the IMRT group and 7/39 in the 3D CRT group had a grade I reaction and 16/20 and 32/39 respectively compared to those having received it by HDR BT (n=20). Nine cases of grade II proctitis (23% overall) were observed, seven in the external radiotherapy group and two in the HDR group respectively (21). The long term results from Oblak et al. showed in the majority of the cases (58.2% of patients) grades III, IV radio dermatitis was the predominant acute toxicity. Grades III, IV late toxicity included late anal stenosis in 3.8%, chronic ulceration in 2.5% and incontinence in 8.8%. Those patients treated with a BT boost instead of an EBRT Boost had less toxicity; however, the difference was statistically non-significant (22). Doniec et al. reported three pts (6%) with a late incontinence as the only late radiotherapy related toxicity. Two of them underwent colostomy (12).