Colorectal cancer is the third most common cancer and the third leading cause of cancer deaths in both men and women in the United States (1). Within the rectum, over 90% of malignancies are adenocarcinomas (2). In contrast, rectal squamous cell carcinomas (SCC) represent only 0.1% to 0.3% of all colorectal cancers, with approximately 200 cases reported to date (3-5). The first case of SCC in the rectum was described by Raiford in 1933 (6), and Williams later proposed the following criteria for diagnosis (7): (I) metastatic SCC must be excluded; (II) the tumor must not have a squamous lined fistulous tract; (III) the tumor cannot represent proximal extension of SCC of the anus, and (IV) histologic confirmation. Though histologically similar to anal SCC and anatomically identical to rectal adenocarcinomas, rectal SCC is a rare and unique malignancy for which evidence and clinical consensus surrounding treatment are lacking.

Treatment for rectal SCC has evolved over time, from a surgical approach as used in rectal adenocarcinomas and transitioning to primary chemoradiotherapy (CRT) similar to current management of anal SCC. Although more recent data support favorable outcomes with high-dose CRT as the primary intervention for rectal SCC, evidence is still limited and derived primarily from case reports, case series, one large population-based study (1), and one meta-analysis (3). As large randomized prospective trials are unrealistic in the setting of this rare malignancy, this study evaluates an institutional experience in eight patients and reviews the existing literature to help guide future management approaches.

This retrospective study compared various treatments for patients with rectal SCC treated at Duke University Medical Center from January 1, 1980 through December 31, 2016. Patients were identified through Duke Enterprise Data Unified Content Explorer (DEDUCE) as well as paper and electronic medical records in the Department of Radiation Oncology. Forty-seven charts were identified based on ICD codes (ICD-9: 154, 154.0, 154.1, 153.3, 153.8, and 153.9; ICD-10: C20.0), histology, and keywords (rectal SCC) within the study time period, anticipating that many of these charts included patients with rectal adenocarcinoma as well as SCC of non-rectal origin. This protocol did not involve prospective enrollment of subjects, and consent was obtained through a Waiver or Alteration of Consent and HIPAA Authorization and Decedent Research Notification.

Due to small sample size, all statistical analyses are descriptive. For our systematic review, a comprehensive search of PubMed was performed (search terms: squamous cell carcinoma and rectal cancer), along with the reference list of selected articles reviewed to ensure all relevant publications were reviewed. The search spanned from 1933 to March 2018. A qualitative analysis was performed to examine patient diagnosis, treatment, and outcome.

Treatment characteristics are summarized in Table 2. Three patients underwent initial, curative attempt surgery followed by adjuvant RT, CT, or CRT. There were a range of surgical approaches, including endoscopic resection, Hartmann’s procedure, and low anterior resection (LAR). Two of the three surgical patients required colostomy. Adjuvant RT dose ranged from 3,000 to 4,000 cGy. Adjuvant CT regimens varied and were not adequately documented in one of the cases. Of the reported cases, none used a 5-fluorouracil (FU)/mitomycin C (MMC) regimen. With follow-up ranging from 7.1 to 31.5 months, one patient was alive with no evidence of disease and two patients developed local/regional recurrence (one developed and expired from liver metastases). These two patients received additional treatment: one received CRT and the other received additional RT. Both ultimately progressed and expired. 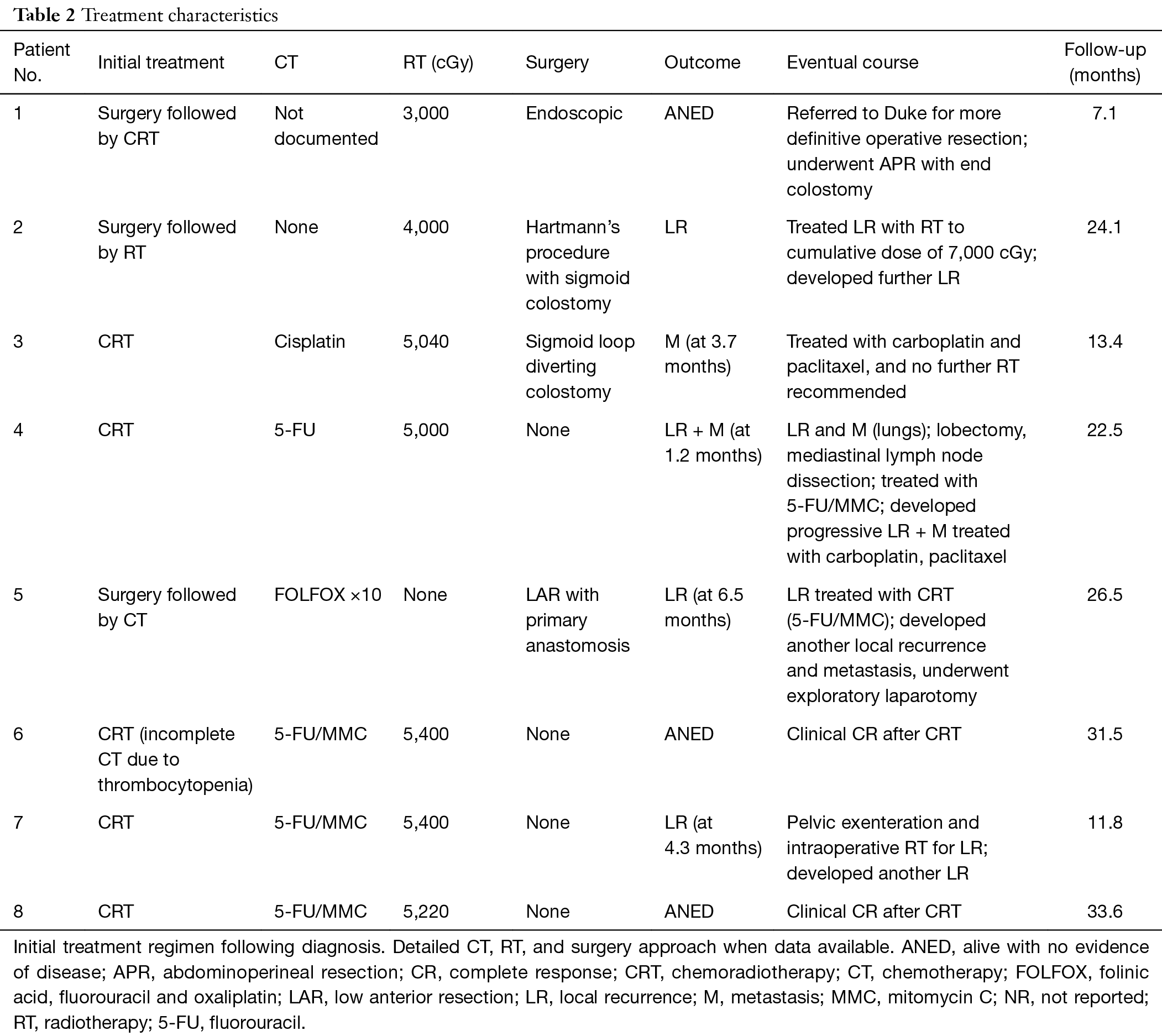 Five patients were initially managed nonoperatively with definitive CRT (one had initial diverting colostomy). One patient received 5-FU, one cisplatin and three 5-FU/MMC. One patient received 5,000 cGy, another 5,040 cGy, another 5,220 cGy, and two patients 5,400 cGy. Of these, one experienced grade 2 acute dermatitis related to radiation. With follow-up duration in these patients ranging from 11.8 to 33.6 months, one patient experienced local recurrence, one developed liver metastases and another both local recurrence and distant metastases. Of these, two patients were treated with surgery, with additional CT in one and intraoperative RT in another. The other received palliative chemotherapy. The fourth and fifth patients achieved complete response on imaging following initial management with CRT (follow-up of 31.5 and 33.6 months) and currently both remain disease-free.

Although histologically similar to anal SCC and anatomically identical to rectal adenocarcinomas, rectal SCC represents a unique malignancy that is distinct in pathogenesis and epidemiology. While the pathogenesis of rectal SCC still requires further characterization, several hypotheses and associations have been proposed, including proliferation of stem cells capable of multidirectional differentiation, chronic inflammatory processes such as ulcerative colitis, infections ranging from schistosomiasis to human papillomavirus, radiation exposure, and squamous differentiation from an underlying adenoma or adenocarcinoma (5,8). Despite the lack of robust epidemiological data, several retrospective series have described trends and suggest that rectal SCC tends to occur more frequently in women (5), as was the case in the present analysis, and is more often presents with advanced disease (9) when compared with rectal adenocarcinomas.

Given its rarity, evidence and clinical consensus on the optimal treatment of rectal SCC are lacking. Despite the differences in anal SCC and rectal adenocarcinoma, both staging and management of rectal SCC have been derived from treatment approaches of these better-characterized malignancies. The standard of care for locally advanced rectal adenocarcinomas is neoadjuvant, short-course RT or long-course, fluoropyrimidine-based CRT, followed by surgical resection (10,11). The surgical approach depends on tumor characteristics (including staging, location, depth of invasion, local and distant metastases) as well as patient factors (including comorbidities and body habitus) (10,12). Historically, rectal SCC patients were managed similarly to rectal adenocarcinomas, primarily relying on LAR or abdominoperineal resection (APR), which are associated significant morbidity (13–46%) (13) and mortality (1–7%) (13,14).

In the present analysis, most patients treated initially with surgery had suboptimal disease control. Although most patients in our series treated with combined CRT also experienced disease progression, two patients had a complete tumor response to treatment without need for salvage surgery or additional treatment. Though our analysis is limited by small numbers, this analysis and others suggest definitive CRT is the preferred treatment approach to rectal SCC.

This conclusion is supported by other reports in the literature. We summarize the largest case series comparing primary CRT vs. surgery in Tables 3,4. In the largest case series to date of rectal SCC by Loganadane et al. in France (4), 23 patients were treated at two institutions from 1992 to 2013. Twenty-one received CRT while two patients received pre-operative CRT followed by planned surgery. Radiation dose ranged from 3,600 to 4,500 cGy, with a boost dose of 1,500 to 2,300 cGy. With a median follow-up of 85 months, the clinical complete response rate was 83% and the 5-year disease-free, colostomy-free and overall survival rates were 81%, 65% and 86%, respectively. Based on the high local control rate and prolonged survival in these patients, the authors recommended rectal SCC be treated similarly to anal SCC. The authors also raised the issue of the best method of evaluating residual disease, including imaging modality and optimal timing of surgery, if indicated.

Table 3 Reported case series to date with ≥ seven patients, in which chemoradiotherapy was the primary treatment approach
Full table 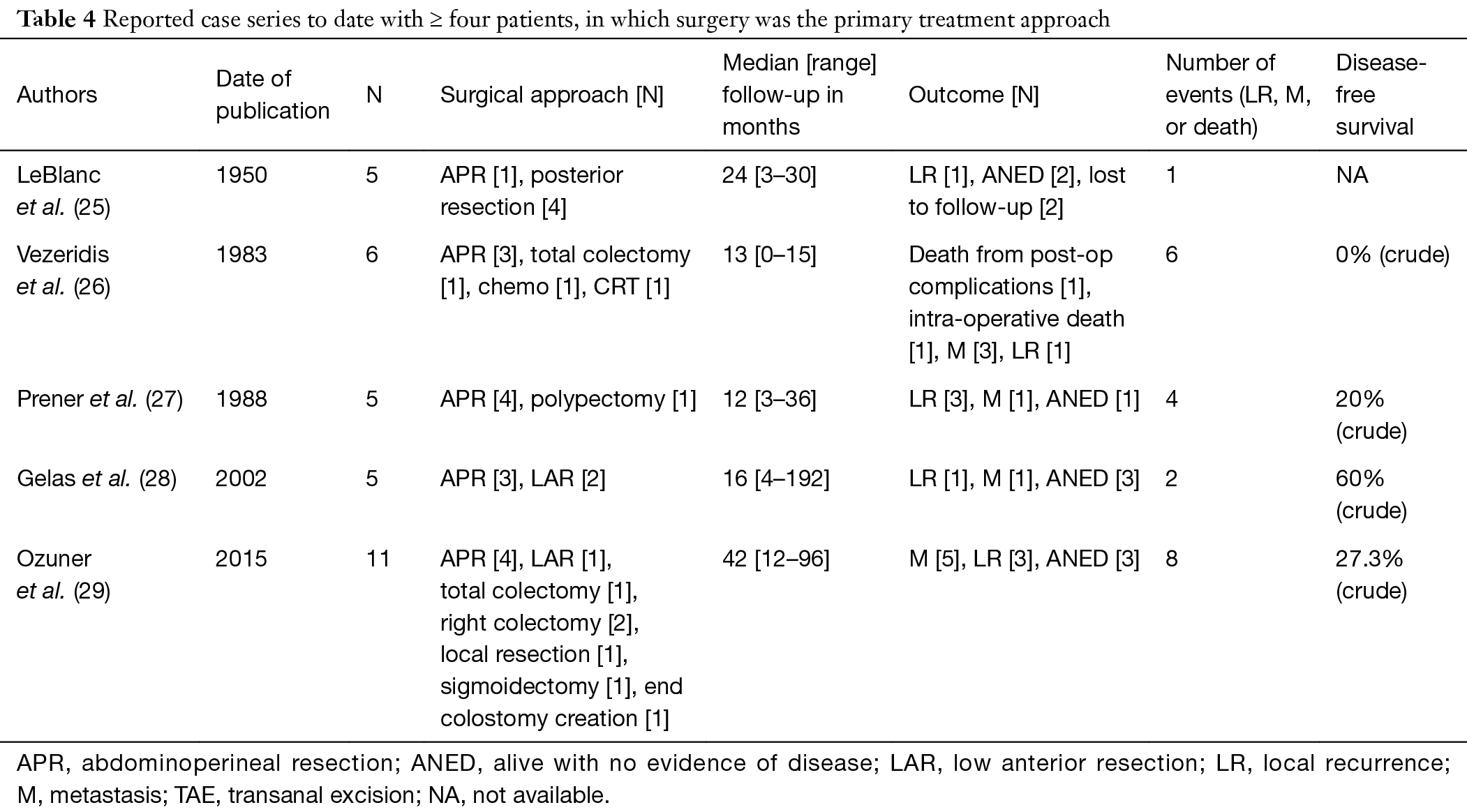 Table 4 Reported case series to date with ≥ four patients, in which surgery was the primary treatment approach
Full table

A Surveillance, Epidemiology, and End Results (SEER) registry population-based analysis of 999 rectal SCC patients treated from 1998 to 2011 was performed (1). Their analysis demonstrated that rectal SCC patients, as compared to rectal adenocarcinoma patients over the same time period, were more commonly female, were associated with larger tumors of higher grade, and were more often treated with radiotherapy than surgery. Surgery did not appear to improve survival, and RT had proportionally greater benefits in rectal SCC as compared to adenocarcinoma patients. These authors recommended non-surgical, RT-based treatment in these patients. Interestingly, this study also notes that the number of rectal SCC diagnoses are increasing over time and that the evidence regarding optimal treatment protocols is limited, highlighting the need for further research. This type of study is limited by its retrospective nature, lack of chemotherapy records, potential selection bias, and potential misdiagnosis of anal SCC with extension into the rectum.

The largest literature review to date by Guerra et al. in 2016 (3) consists of a systematic review of Ovid MEDLINE articles spanning from 1946 to 2015, which identified 487 articles. Of these, 79 were included in the qualitative review and 63 in the quantitative analysis. In this review, pooled overall survival was 86% in patients with initial CRT, compared to 48% in patients treated with surgery initially. The authors summarize that while there is no consensus on the optimal treatment approach, there has been a recent shift from surgery towards CRT as primary therapy, with resultant improved local control. Limitations of this study include heterogeneity of case reports.

Given our limited sample sizes and literature primarily limited to smaller case studies and series, it is difficult to reach a definitive conclusion from this data. However, it raises important questions about the role of initial surgery in this disease, given the high rates of local failure and generally poor outcomes. It also raises questions for how to optimize CRT as the initial treatment approach for rectal SCC, including CT regimen, RT approach and targets, optimal evaluation of residual tumor status, and appropriate monitoring of treatment response, particularly when some candidates will require salvage surgery.

In summary, the optimal management and evaluation of tumor response for rectal SCC remains unknown. As randomized trials are challenging given the rarity of this malignancy, evidence based on case reports and case series contribute to our understanding of the epidemiology and therapeutic management. Treatment of rectal SCC has evolved from upfront surgery to definitive CRT as initial therapy. However, there is a perception that treatment for rectal SCC should involve primary surgery even in contemporary series, despite the growing evidence of improved outcomes achieved with CRT alone (20). Despite this, the available data, including the present series as well as a review of the existing literature, indicate definitive CRT is preferred to surgery based on improved clinical outcomes, sphincter preservation and morbidity profile. Figure 1 shows a proposed treatment algorithm for these patients.

Conflicts of Interest:All authors have completed the ICMJE uniform disclosure form (available at http://dx.doi.org/10.21037/jgo.2018.11.02). CGW serves as an unpaid editorial board member of Journal of Gastrointestinal Oncology from Jan 2019 to Dec 2020. The other authors have no conflicts of interest to declare.

Ethical Statement: The authors are accountable for all aspects of the work in ensuring that questions related to the accuracy or integrity of any part of the work are appropriately investigated and resolved. The study was approved by Duke University IRB (No. 00083063). This protocol did not involve prospective enrollment of subjects, and consent was obtained through a Waiver or Alteration of Consent and HIPAA Authorization and Decedent Research Notification.