Gastric outlet obstruction (GOO) is a recognised complication of malignancies of the upper gastrointestinal (UGI) tract. The most common causes are pancreatic and gastric malignancies, with lymphomas, ampullary carcinomas, biliary tract cancers and metastases also contributing. In patients with pancreatic cancer, it is estimated that 15-20% of patients develop GOO (1). The majority of patients have locally advanced or metastatic cancer with dismal prognosis and median survival of only  3-6 months (2). The aim in palliating patients with malignant GOO is to re-establish an oral intake by restoring gastrointestinal continuity. This ultimately improves patients’ quality of life in the advanced stages of cancer. Traditionally, surgical gastrojejunostomy (GJ) has been the standard treatment approach for these patients. Although GJ relieves symptoms in almost all patients, the procedure is associated with morbidity of 10-16% and mortality of up to 7% (3-5). Also, post-operatively, most patients suffer delayed gastric emptying that is often associated with longer hospital stay (6). Although laparoscopic GJ has been introduced as a less invasive alternative to open GJ, the technique still carries substantial risk and is not widely available (7-10).

Endoscopic placement of self-expandable metal stents (SEMSs) has emerged as an alternative means for palliation of GOO. Multiple uncontrolled case-series studies have demonstrated SEMSs to be safe and effective with technical success of 90-100% and clinical success of 67-100% (11-17). Randomized trials have shown mixed results, with two trials favouring endoscopic SEMS (18,19) and one favouring surgical GJ (20). Therefore, it is currently unknown whether patients with GOO are best palliated with endoscopic SEMS placement or GJ. Also, SEMS are expensive and it is unclear whether their use is less costly when compared with surgical GJ. Although direct cost studies have shown that SEMS placement is less costly than surgery, the general applicability of the data is debatable given the small number of patients enrolled in each of these single-institution trials (7,21,22).

Hence we performed this meta-analysis to compare outcomes of endoscopic stenting (ES) with GJ. The primary goal of this study is to the compare the overall complication rate and effectiveness (ability to tolerate oral intake) of SEMS and GJ in patients with GOO. The secondary objective is to identify predictors of clinical outcomes [reintervention rate, length of hospital stay (LOHS), hospitalization charges, and complications].

We followed the Preferred Reporting Items for Systematic reviews and Meta-Analyses PRISMA guidelines where possible in performing our systematic review (23). We performed a systematic search through MEDLINE (from 1950), PubMed (from 1946), EMBASE (from 1949), Current Contents Connect (from 1998), Cochrane library, Google scholar, Science Direct, and Web of Science to January 2013. The search terms included “gastric outlet, gastroduodenal or duodenal obstruction’’, ‘‘gastrojejunostomy, gastroenterostomy or surgical bypass’’, and ‘‘endoscopic and stent”, which were searched as text word and as exploded medical subject headings where possible. No language restrictions were used in either the search or study selection. The reference lists of relevant articles were also searched for appropriate studies. A search for unpublished literature was not performed.

We included studies that met the following inclusion criteria:

• Studies identifying the population of patients with GOO who underwent GJ or SEMS.

Pooled event rate and 95% CI were calculated using a random effects model (24). We tested heterogeneity with Cochran’s Q statistic, with P<0.10 indicating heterogeneity, and quantified the degree of heterogeneity using the I2 statistic, which represents the percentage of the total variability across studies which is due to heterogeneity. I2 values of 25%, 50% and 75% corresponded to low, moderate and high degrees of heterogeneity respectively (25). The quantified publication bias using the Egger’s regression model (26), with the effect of bias assessed using the fail-safe number method. The fail-safe number was the number of studies that we would need to have missed for our observed result to be nullified to statistical non-significance at the P<0.05 level. Publication bias is generally regarded as a concern if the fail-safe number is less than 5n+10, with n being the number of studies included in the meta-analysis (27). All analyses were performed with Comprehensive Meta-analysis (version 2.0).

The original search strategy retrieved studies (Figure 1). The abstracts were reviewed and after applying the inclusion and exclusion criteria, articles were selected for full-text evaluation. Of the articles selected, only 20 met full criteria for analysis and are summarised in Table 1. The years of publication ranged from 2001 to 2013. 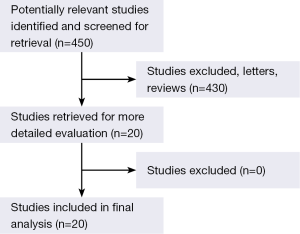 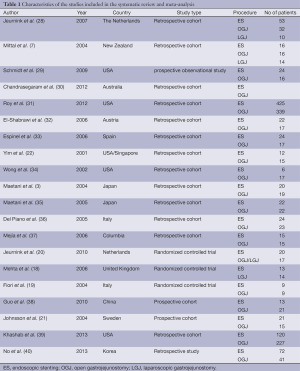 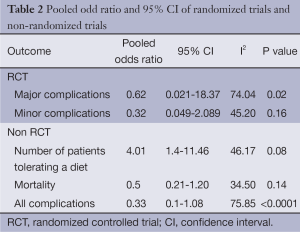 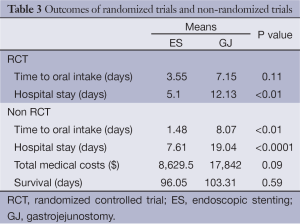 No publication bias was detected using the Egger’s regression model.

GOO secondary to unresectable primary or metastatic malignancy is a challenging aspect of patient care. The main objective of a palliative procedure in patients with malignant GOO is to restore their ability to eat.

A comprehensive review of 32 case series including 606 patients was conducted by Dormann et al. (41) 94% of the patients were unable to take food orally or were mainly ingesting liquids. Stent placement and deployment were successful in 589 of the patients (97%). Clinical success was achieved in 526 patients in the group in which technical success was reported (89%; 87% of the entire group undergoing stenting). Disease-related factors accounted for the majority of clinical failures. Oral intake became possible in all of the patients in whom a successful procedure was carried out, with 87% taking soft solids or a full diet, with final resolution of symptoms occurring after a mean of 4 days. There was no procedure-related mortality. Severe complications (bleeding and perforation) were observed in seven patients (1.2%). Stent migration was reported in 31 patients (5%). Stent obstruction occurred in 104 cases (18%), mainly due to tumor infiltration. The mean survival period was 12.1 weeks.

Current literature included three RCTs that compared ES with GJ (18-20). These three trials combined consist of a total of 84 patients. Confounding variables could not be studied in most of the published trials to avoid overfitting. However, if factors, such as chemoradiation therapy, carcinomatosis, age, comorbidities, etc., are not accounted for, results may be biased.

Memorial Sloan-Kettering Cancer Center (29) performed a prospective observational study examining quality of life in patients with malignant GOO. Median overall survival was 64 days. A shorter hospital stay and trend to lower mortality were observed after stent placement; solid food intake and rates of secondary intervention were comparable. Both stent and surgical bypass were associated with acceptable QOL outcomes. Fifteen patients refused participation at 1 month and 28 died of disease before 3 months, so ten patients completed all surveys.

In conclusion, while the technical and clinical outcomes of GJ and stent placement appear comparable in relieving obstruction, stent placement is associated with shorter LOS. This endoscopic approach is also in line with the minimally invasive goals of palliation, namely minimizing pain, hospitalization, and physiologic stress to the patient.