In the United States alone nearly 18,000 new esophageal cancers are diagnosed and more than 15,000 deaths occur each year, illustrating the high mortality of this disease and the ongoing need for improved treatment strategies (1). Randomized controlled trials comparing neoadjuvant chemoradiotherapy (NAC) with surgery alone have demonstrated statistically significant improvements in overall survival (OS) (2-5). More recently, the CROSS trial modified traditional chemotherapy protocols, introducing weekly administration of carboplatin and paclitaxel with concomitant radiotherapy. This resulted in a clear OS benefit for NAC versus surgery alone, with a median OS of 49.3 versus 24 months, respectively (5). These studies are consistent with several meta-analyses, which demonstrate that NAC significantly increases OS compared to surgery alone (6-9). Taken together, these studies highlight the utility of NAC in the treatment of esophageal cancer.

In addition to providing a clear survival benefit, NAC increases the likelihood of an R0 resection (6), which is associated with significantly improved OS in patients with esophageal cancer (10). Importantly, the pathologic stage following esophagectomy in patients treated with NAC is a strong predictor of OS, and in particular, downstaging by NAC is associated with improved disease-free survival (DFS) and OS (11). Additional studies have demonstrated that patients with a pathologic complete response (pCR) following NAC and esophagectomy have high long-term OS rates (12,13).

Based on these and other data, multimodality treatment including NAC followed by esophagectomy has been established as standard of care for early stage (II-III), resectable esophageal cancer and that patients treated with NAC are more likely to have an R0 resection and pCR, more likely to be downstaged, and have improved DFS and OS. Therefore, the specific aim of the current study was to analyze OS outcomes of NAC at a single, tertiary care academic medical center. Additional objectives were to quantify the downstaging secondary to NAC, analyze the impact of downstaging on OS, and determine to what extent histologic subtype affects OS.

The study was approved by the Institutional Review Board at Oregon Health & Science University (OHSU) and patient informed consent was waived. Medical records from patients with esophageal malignancies treated with NAC followed by esophagectomy at OHSU from September 1996 to May 2011 were selected from a prospective esophageal registry and retrospectively reviewed. Eligible patients included those with stage I-III esophageal cancer deemed medically operable by an experienced general or thoracic surgeon or medically inoperable who went on to receive NAC and were subsequently deemed operable. Patients with recurrent or metastatic disease, a history of previous malignancy, and as those unable to undergo chemoradiotherapy were excluded from the study. A cohort of 106 consecutive patients formed the basis of this selection.

Patients who underwent NAC were treated with platinum-based chemotherapy (including cisplatin, oxaliplatin, or carboplatin) together with 5-fluorouracil (5-FU) or capecitabine concurrently with radiation. Additionally, 17 patients received a mitotic inhibitor (paclitaxel or docetaxel) in their regimen. Notable exceptions include six patients who received platinum-based therapy but did not receive 5-FU or capecitabine and a single patient who received paclitaxel and 5-FU but did not tolerate a platinum-based agent. The majority of patients received 50.4 Gy radiation by standard fractionation, although cumulative dose ranged from 36-63 Gy. Surgical resection was performed via a transhiatal, Ivor-Lewis, or 3-field approach as previously described (14,15). Eligible patients underwent chemoradiotherapy at OHSU as well as local community hospitals, however all surgical resections were performed at OHSU by experienced general, thoracic, and/or oncologic surgeons.

Prior to administering NAC, all patients were staged by endoscopic ultrasound (EUS), computed tomography (CT), or positron emission tomography (PET). Following NAC and esophagectomy, post-operative pathological staging was compared to initial staging to analyze the effect of NAC and subsequent down- or upstaging. In this study, an R0 resection is defined as a curative resection, with microscopic examination of margins demonstrating absence of tumor cells while a R1 resection demonstrates the presence of tumors cells at the margin of resection. A pCR is defined as the absence of any residual tumor cells during histologic examination.

Clinical follow up and the Social Security Death Index were used to determine length of survival for each patient. OS was analyzed by the Kaplan Meier method and survival curves were generated using R statistical software (version 2.13.1, R Development Core Team, Vienna, Austria). Inter-group comparisons were analyzed using a log-rank test and statistical significance was determined by P value <0.05. 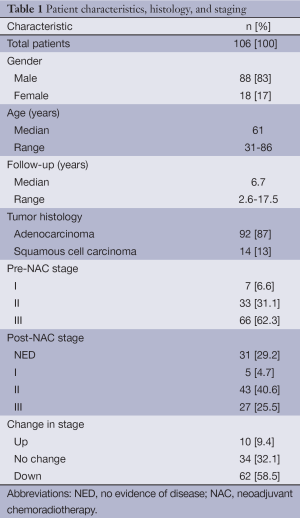 Following NAC and esophagectomy, a pCR with no evidence of disease histologically was achieved in 31 patients (29%) of the cohort. Moreover, the majority of patients had an R0 resection with negative margins microscopically (n=98, 92.5%). Grossly, 14 patients (13.2%) had an R1 resection with confirmed positive margins in 8 patients (7.5%). Expectedly, post-operative pathologic staging determined that 62 patients (59%) were downstaged following NAC while 9 patients (8%) were upstaged and 34 patients (32%) remained at the same stage (Table 1). 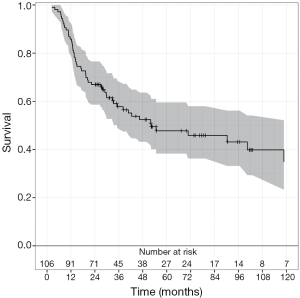 Figure 1 Overall survival for the 106 patients in our cohort. 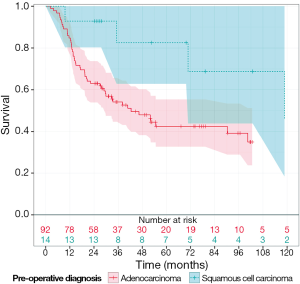 Figure 2 Overall survival (OS) by histological subtype in all 106 patients in our cohort (P=0.06). 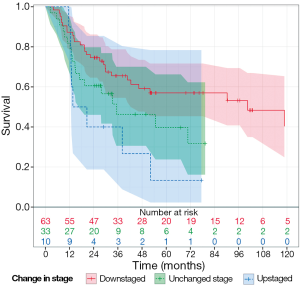 The results in this study demonstrate that NAC was effective in downstaging the majority of patients in this cohort and effectively increased the chance of an R0 resection. These findings are important, as pathologic stage following esophagectomy in patients treated with NAC is a strong predictor of OS. Consequently, downstaging by NAC is associated with improved DFS and OS (11). The patients in this study had improved OS survival compared to the median OS, suggesting patients from this tertiary care academic medical center treated with NAC and esophagectomy had similar outcomes compared to those in recent multi-center clinical trials (5,13). Additional studies have demonstrated that patients with a pCR following NAC and esophagectomy have high long-term OS rates (12,13). Our findings are consistent with these results and patients in our cohort that had a pathological complete response rate had a median OS of 52 months.

Interestingly, our patients with squamous cell carcinoma showed a trend toward more favorable OS compared to those with adenocarcinoma. The relationship between histologic subtype and OS in esophageal cancer is multifactorial and not completely understood at the present time. Indeed, studies in early stage esophageal cancer suggest squamous cell carcinomas are more susceptible to distant lymphatic spread and confer reduced 5-year OS rates (16). Conversely, analysis of patients with esophageal cancer and non-regional nodal metastasis revealed squamous cell histology was an independent positive predictor of long-term survival following esophagectomy (17). Given that the majority of patients in our cohort presented with stage III disease, our results are consistent with those studies in more advanced disease and suggest squamous cell histology confers a more favorable OS. However, as only 13% of patients in our study had squamous cell carcinoma, further characterization of the factors contributing to this observation is not possible within this current study.

While these results have contributed to the understanding of the effectiveness of NAC followed by esophagectomy for esophageal cancer at a single academic medical center, there are particular limitations of this study. Once such limitation was the variation in chemotherapy and radiation regimens used throughout the 15 years for which patients were analyzed in this cohort. These treatment alterations introduced additional variables difficult to account for given the heterogeneity of treatment plans and improvement of surgical techniques over such a lengthy time period. Additionally, while this study identified a trend in improved OS compared to the median OS for downstaged patients following NAC and esophagectomy, this study was underpowered to detect a statistically significant difference.

In conclusion, this study analyzed OS outcomes for patients with esophageal cancer who underwent NAC followed by esophagectomy at a single, tertiary care academic medical center. This study determined that NAC was effective in downstaging the majority of patients and effectively increased the chance for an R0 resection. These patients, in turn, had improved OS compared to the median OS. Together, the results of this study support the rationale for NAC followed by esophagectomy in effectively downstaging patients and increasing the likelihood of an R0 resection and improved OS.

The authors would like to acknowledge the professionalism, expertise and dedication of the radiation therapists at the Oregon Health & Science University Knight Cancer Institute; Dr. Dolan’s authorship in this publication was supported by the Oregon Clinical and Translational Research Institute (OCTRI), and a grant (No. UL1TR000128) from the National Center for Advancing Translational Sciences (NCATS) of the National Institutes of Health (NIH).

Disclosure: The content is solely the responsibility of the authors and does not necessarily represent the official views of the NIH.