Gastrointestinal stromal tumors (GISTs) are rare, yet they are the most common mesenchymal neoplasm in the gastrointestinal tract with an annual incidence in the United States of 3,300–6,000 new cases a year (1). Postulated to arise from the interstitial cell of Cajal, 75–80% of cases have mutations in the C-KIT proto-oncogene in exons 9, 11, 13, or 17, while an additional 10% possess platelet-derived growth factor receptor (PDGFR) mutations (2-4). A clear understanding of the tumor biology has led to improved treatment of these sarcomatous neoplasms of the gastrointestinal tract. In particular, knowledge of these genetic abnormalities led to the use of multi-targeted tyrosine kinase inhibitors (imatinib, sunitinib, regorafenib), which have revolutionized the treatment of solid tumors (5-8).

Up to 90% of these tumors arise from the stomach and small intestine while the remaining arise from the esophagus, colon, and rectum (9-12). Nearly all treatment decisions in patients with GISTs are predicated on the study of gastric and small bowel GISTs. Based on several randomized controlled trials of GISTs, the majority of which are of gastric and small bowel origin, the most important factors that have been shown to impact clinical outcome are organ of origin, tumor size in largest dimensions, and mitotic rate (10,11,13,14).

There is a paucity of medical literature describing GISTs that arise from uncommon locations of the gastrointestinal tract. Thus, there is a need for a better characterization of this histologic type of tumor by primary organ site to improve patient care. The purpose of this study was to provide a comprehensive, detailed description of colon and rectal GISTs and to compare their behavior to that of the more commonly described gastric GIST.

This study was reviewed by the Yale Institutional Review Board and deemed exempt from review as a secondary data analysis. The American College of Surgeons (ACS) National Cancer Data Base (NCDB) was reviewed to identify patients from 2006–2013 with gastric, colon (including rectosigmoid junction), or rectal primary tumors with histologically defined GIST by ICD-O-3 code 8936. 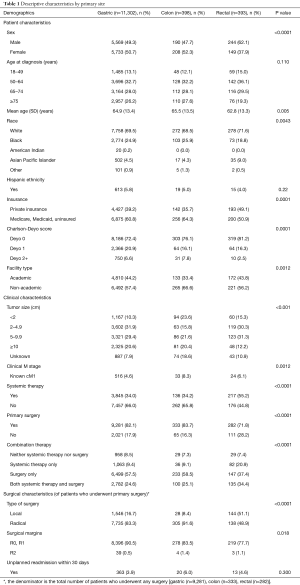 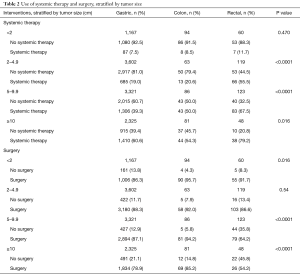 Table 2 Use of systemic therapy and surgery, stratified by tumor size
Full table 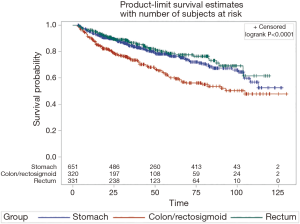 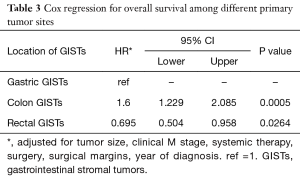 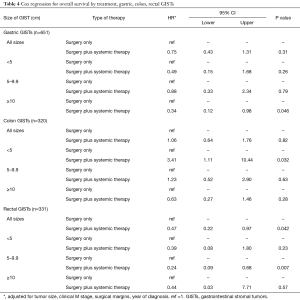 GISTs which arise in the colon and rectum are rare, collectively accounting for only 7% and 5% of all histologic cases, respectively (12). In this retrospective study utilizing the NCDB, we compare 11,302 gastric GISTs to 791 colon and rectal GISTs to perform the largest study to date that characterizes these rare anatomic variants of GISTs. We demonstrate unique tumor biology and patterns of care for gastric, rectal, and colon GISTs, with improved survival and response to adjuvant systemic therapy for tumors of rectal origin.

There are multiple clinical characteristics that distinguish colon and rectal GISTs from gastric GISTs. With regards to survival, GISTs arising in the colon and rectum show different patterns compared to the paradigms of other cancers. In contradistinction to colorectal adenocarcinoma, rectal GISTs fare better than colon GISTs (16). Our unadjusted survival analyses show that patients with rectal GISTs demonstrated a prolonged overall survival compared to colon GISTs, with a mean survival time of 85.7 vs. 71.3 months, log-rank P<0.0001. And while GISTs arising from the stomach are traditionally considered a favorable prognostic feature, our data shows that tumors of rectal origin fare better than those of gastric origin (17). In multivariate Cox regressions adjusted for clinical M stage, tumor size, surgical margins, and treatment strategy, rectal GISTs further demonstrated improved overall survival compared to gastric GISTs (HR =0.695, P=0.0264). On the contrary, patients with colon GISTs demonstrate worse overall survival compared to gastric GISTs while still receiving comparable frequencies of systemic therapy and adjusted for tumor size, clinical M stage, surgical margins, and treatment strategy (HR =1.6, P=0.0005). This is consistent with previous findings from the Surveillance Epidemiology and End Result (SEER) database, which, in a series of 126 colon and 135 rectal GISTs, demonstrated that colon GISTs have worse disease specific survival compared to rectal GISTs (18). Thus, current standard systemic therapies (i.e., imatinib, sunitinib, regorafenib) for GIST appear less efficacious for tumors arising from the colon as opposed to the stomach suggesting a difference in tumor biology based on organ of origin.

The surgical approach to GISTs varies based on organ of origin. Our study shows that rectal GISTs were less likely to undergo primary resection compared to gastric and colon GISTs (71.8% vs. 82.1% vs. 83.7% respectively, P<0.001), which was consistent when stratified by tumor size except for tumors less than 2 cm. Previous work using the SEER database has demonstrated that there is no significant difference in GIST-specific mortality in patients with <2 cm GISTs who undergo surgical resection versus those who do not (19). Furthermore, we also show that surgical treatment of patients with rectal GIST, in contradistinction to colonic GIST, is more likely to be local excision (51.1% vs. 8.4%, P<0.0001). This is partly explained by the advances in transanal endoscopic surgical approaches by gastrointestinal surgeons where as these are either technically not possible (colon) or not frequently performed (gastric) by a majority of gastrointestinal surgeons. Notably, rectal GISTs were found to have a lower rate of R0 or R1 resection than gastric or colon GISTs (77.7% vs. 90.5% vs. 83.5%, P=0.018).

Taken together, our study reinforces the notion that the underlying biology of GISTs is different across primary sites, which can translate to differences in response to systemic therapy and/or improvements in overall survival. The rarity of these particular tumor types has been an impediment to conducting site-specific investigational studies. Many surgical series and randomized control trials report very few primary colorectal GISTs, and therefore oncologic guidelines address the histologic subtype without consideration to the primary site (7,11). However, our data suggests that not all GISTs behave the same and therefore warrant continued research and individualized therapy.

While the utilization of a large national database has allowed us to assemble the largest study cohort of colorectal GISTs to date, there are still limitations. Most importantly, there are a number of prognostic factors for GISTs that are either not reported in the NCDB or very inconsistently reported. While number of mitoses per high-power field, KIT immunohistochemistry, KIT mutations, PDGFR mutations, and tumor multiplicity have more recently started to be collected in the NCDB, we found that there was an unacceptably high number of cases without these parameters being reported (>50%) and therefore did not include them as covariates. These are likely to be significant factors in understanding the suggested difference in tumor biology and response to systemic therapy, especially if colon GISTs do not demonstrate improvement in overall survival with the use of adjuvant tyrosine kinase inhibitors. Furthermore, GISTs are inconsistently reported to the NCDB due to strict reportability standards. For GISTs to be included in state tumor registries, they must be read pathologically as “malignant” or exhibit strict clinical features that demonstrate malignancy, such as multiple foci, lymph node involvement, metastases, or the administration of systemic therapy. Clinically, however, we do not classify GISTs as benign or malignant and instead stratify their risk by tumor grade and mitotic rate, as in the NIH-Fletcher system (13). Therefore, there is a concern that, not only are GISTs underreported, but there is a bias towards more aggressive GISTs in the NCDB (20). It is unclear if this bias is differently applied based on primary site. Finally, we are unable to assure that the systemic therapy utilized in this analysis represents the standard of care targeted therapy, imatinib or sunitinib or regorafenib, although use of any of these drugs would be captured in the NCDB as “single-agent chemotherapy”. A more comprehensive tracking system to monitor specific patient-level type of systemic therapy is needed to examine effectiveness of specific targeted therapy such as the use of tyrosine kinase inhibitors in these tumors.

This work was supported by the Lampman Research Fund in Yale Surgical Oncology and the Yale University School of Medicine Medical Research Fellowship.

Funding: This publication was made possible by CTSA Grant Number UL1 TR001863 from the National Center for Advancing Translational Science (NCATS), components of the National Institutes of Health (NIH), and NIH roadmap for Medical Research.

Ethical Statement: This study was reviewed by the Yale Institutional Review Board (No. 00000596) and deemed exempt from review as a secondary data analysis.