Management of liver metastases from gastrointestinal stromal tumors: where do we stand?

Gastrointestinal stromal tumors (GISTs) constitute the most frequently encountered mesenchymal tumors of the gastrointestinal tract, accounting for 1–3% of all its malignancies (1,2). Although the most common primary site of GISTs is the stomach and proximal small intestine, they can be found in anywhere along the GI tract (1). It is estimated that 25% of patients with newly diagnosed GISTs present with synchronous metastatic disease, usually in the liver and peritoneum (3). Other locations include the lungs and bones (4).

The management of metastatic GIST disease has evolved dramatically during the last decade as a result of the introduction of tyrosine kinase inhibitors (TKIs) (5). Response to traditionally used chemotherapeutic agents for metastatic GIST lesions until the 00’s was poor. On the contrary, the initial response to imatinib has been demonstrated to be as high as 80% (6). Survival rates before TKI did not exceed 16 months. Post introduction of imatinib, patients enjoy a remarkable overall survival (OS) of approximately 5 years (7). Imatinib has become the base therapy for metastatic GISTs. Indications for surgical resection as recommended by the National Comprehensive Cancer Network (NCCN) guidelines include limited disease, progression refractory to TKI, and locally advanced or previously unresectable tumors that manifest favorable response to neo adjuvant therapy with TKI (8).

The timing, sequence, and effectiveness of imatinib administration and surgical resection have been the subject of debate. In the absence of randomized controlled trials, recommendations and current strategies are based on small volume studies. The aim of our review was to evaluate currently available information on long-term results following resection of liver metastases (LM) from GISTs. 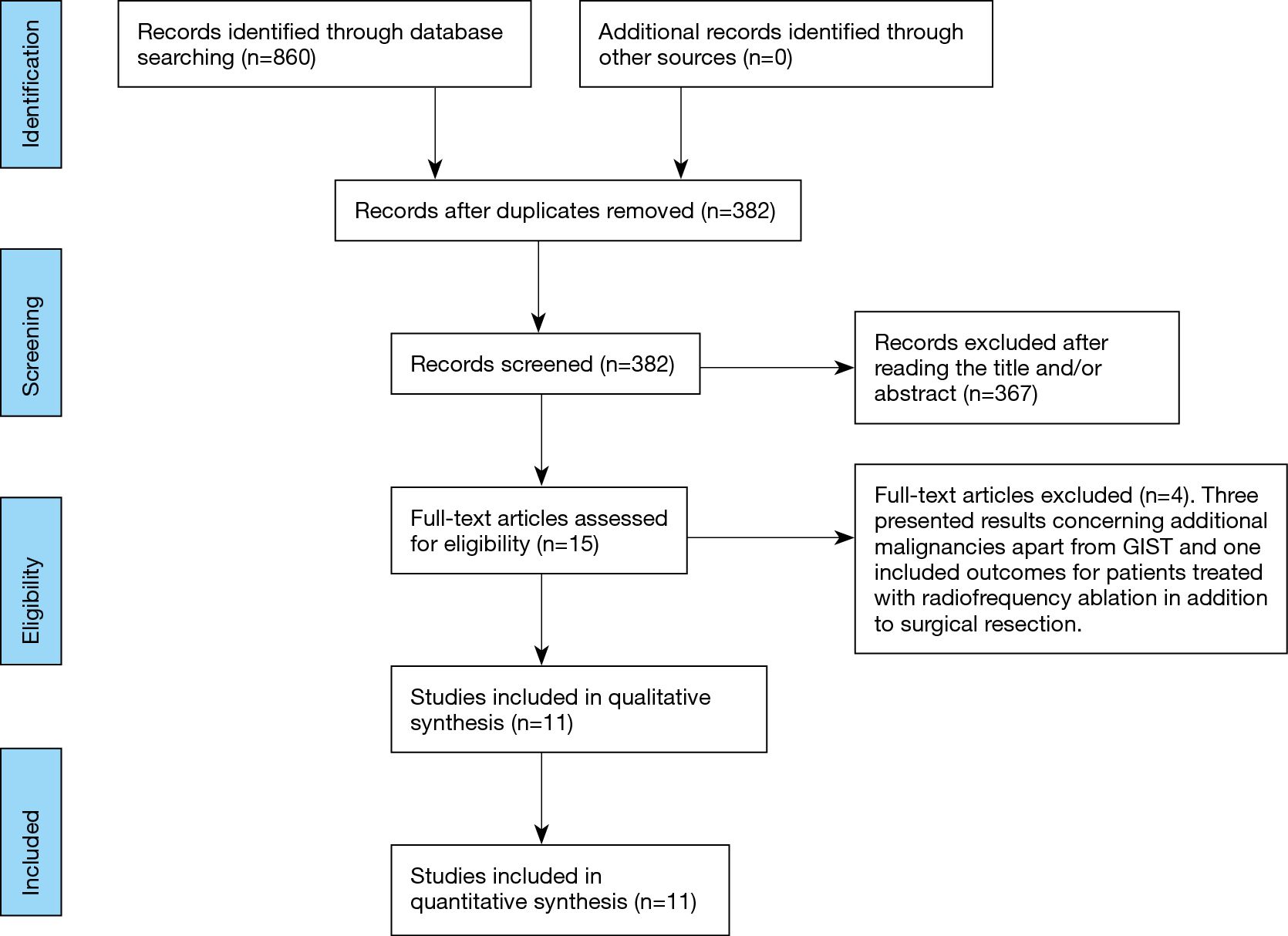 We searched for articles published up to October 2016 using Medline [1966–2016], Scopus [2004–2016], and Google Scholar [2004–2016] databases with the references included in the full text articles retrieved. The following key words were used for the search: “liver metastasis”, “gastrointestinal stromal tumors”, “metastasectomy”, “liver resection”, “metastatic GIST”, “liver surgery”. A minimum number of search keywords were utilized in an attempt to assess an eligible number that could be easily searched while simultaneously minimizing the potential loss of articles. Those articles that fulfilled or were deemed to fulfill the inclusion criteria were retrieved. The PRISMA flow diagram schematically presents the stages of article selection (Figure 1).

Postoperative mortality was defined as the overall number of recorded deaths within 30 days following surgery. The terms DFS and recurrence-free survival (RFS) were considered as identical.

A high heterogeneity in the selection of populations, study characteristics, and discrepancies in the interpretation of statistical analyses of individual studies precluded a meta-analysis of the results. A meticulous systematic review was therefore conducted.

Four studies were excluded from our analysis (10-13). Three of them reported results on additional malignancies and did not fulfill our inclusion criteria (10,11,13). The forth study in addition to including LM from various sarcomas also encompassed radiofrequency ablation as a therapeutic strategy (12). 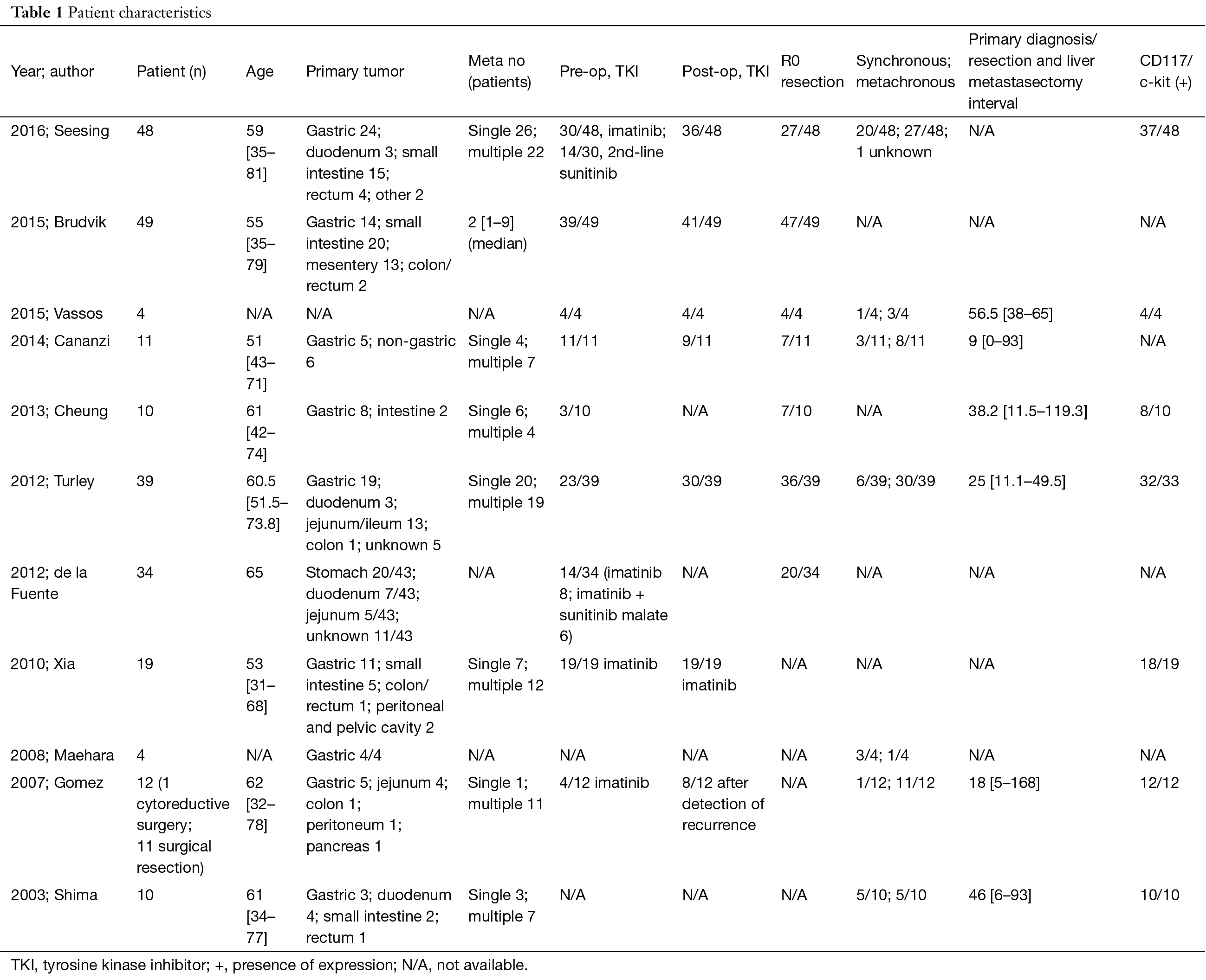 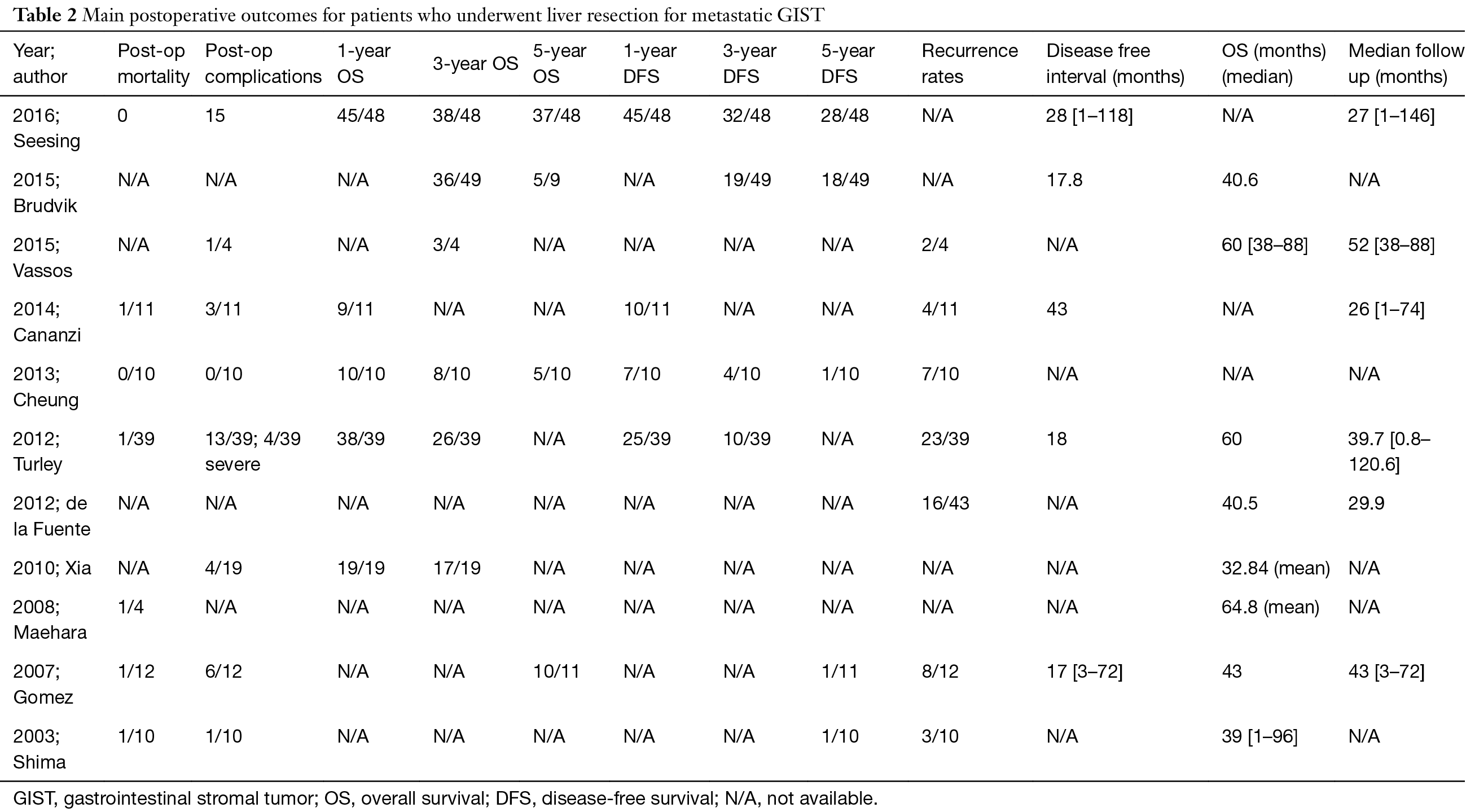 Cananzi et al. included 11 patients with metastatic GIST to the liver who underwent hepatic resections following neoadjuvant TKI therapy (imatinib) in a retrospective study (22). Patients were preoperatively divided into two groups: the ‘progression group’ (where cytoreductive surgery was performed) and the ‘response to TKI group’ (where surgery with curative intent was undertaken). Two individuals did not receive therapy with TKI. R0 resections were reported in seven cases. Survival rates as well as the association between R0 resection and postoperative deaths were recorded.

Brudvik et al. reported results from 146 patients with liver metastasis after GIST or sarcoma (15). In the present review we selectively evaluated 49 patients with GIST LM included in the above mentioned study. A total of 39 received preoperative TKI and 41 postoperative TKI. Apart from reporting OS, relapse-free survival outcomes, and recurrence rates, a subgroup analysis on adjuvant imatinib and relapse free survival was also performed. Univariate analysis revealed prognostic factors of survival.

Turley et al. included 39 patients who underwent GIST liver metastasectomy in a retrospective study (18). Patients with cirrhosis and abnormal liver function tests were excluded. TKI was administered as neoadjuvant therapy prior to surgery in 23 patients; 19 of them were treated with imatinib for a median interval of 18 months; 4 received sunitinib for a median of 8.5 months. Postoperatively, imatinib was administered in 27 patients and sunitinib in 6 (due to imatinib resistance). Uni- and multi-variate analyses were conducted to identify predictive factors of survival and to clarify the association between TKI timing and resection.

de la Fuente et al. included 59 patients in a retrospective comparative study (19). A total of 43 patients with hepatic metastases were compared to 16 with synchronous hepatic metastases and sarcomatosis; 34 patients underwent hepatectomy for single hepatic metastases; 14 of them received preoperative TKI therapy (8 imatinib and imatinib and/or sunitinib). The effectiveness of this study in evaluating the potential benefits of surgery was limited by the lack of survival outcomes of resected patients.

Xia et al. reported 39 patients in a randomized trial (23); 19 of them (the operation group) received a combination of surgical resection with preoperative (6 months) and postoperative (2–4 weeks) oral imatinib. The non-operation group included the remaining 20 who received imatinib as the only treatment. A subgroup analysis based on the extent of response to TKI therapy was conducted to evaluate survival among the two groups.

Gomez et al. included 12 patients aged 32–78 years in a retrospective single center trial (20). Preoperatively four received imatinib for a median period of 13.5 months. Two of them developed recurrences and were treated with TKI (imatinib) postoperatively. Imatinib was also administered to all other patients with recurrences (n=8). Clinico-pathological features of patients with disease free survival greater than and under 2 years were evaluated.

Shima et al. described 10 patients treated with hepatectomy for GIST LM (21). No significant differences were reported for median survival based on timing, number, and size of hepatic metastases. Mortality and survival rates were listed.

Finally, Maehara et al. presented a series of four patients who underwent hepatic resection after gastric GIST (24). In addition to the limited number of enrolled patients, data on survival outcomes were limited to mortality and median survival.

Seven studies included recurrence rates (16-22). A total of 63 out of 129 patients presented with recurrent disease after liver metastasectomy. Vassos et al. and Gomez et al. mentioned that recurrences occurred in two and eight patients respectively and were treated with surgery and/or RFA (16,20). Seven of ten patients in the study of Cheung et al. developed tumor recurrence (17). In the same study, none of the risk factors examined as predictive of recurrence (such as age, mitotic activity and tumor characteristics) reached significance. Shima et al. and Cananzi et al. recorded similar recurrences (three and four patients, respectively) in the peritoneum and/or the liver (21,22). Finally, 23 and 16 patients were diagnosed with recurrent disease after liver metastasectomy by Turley et al. and de la Fuente et al. (18,19).

The treatment strategy for GISTs has undergone a major evolution during the last 15 years as a result of TKIs. The introduction of these targeted agents has remarkably improved survival rates even in the setting of metastatic disease. Surgical resection of LMs from GISTs had historically been considered as a palliative measure (11). In the past, patients with LM from sarcomas treated with surgery alone had median survivals of 37–39 months (10,12). Recent studies however, have highlighted the beneficial effect of surgical resection in the treatment of metastatic GISTs in combination with TKI administration, reporting 5-year survival rates as high as 91% (14,20).

Poor initial response and acquired resistance associated with chronic use constitute important limitations of imatinib (25). Notably, acquired resistance to imatinib has been reported in almost half of patients after 18 months (6). A recent multicentric study demonstrated that patients who underwent surgery for metastatic GIST disease after prolonged preoperative administration of TKIs had worse outcomes than those who received short neoadjuvant TKI treatments (26). Although the authors remarked that such results could be explained by a selection bias of patients with less desirable responses, they reached the conclusion that surgical resection confers maximum benefit only when undertaken within a short “window of opportunity” (26).

The evaluation of predictive factors has also been problematic due to the small volume of patients and the differences in therapeutic approaches used during the years. Reported predictive factors include surgical resection, R0 resection, age <55 years, clinical response to TKIs, pre- and post-operative administration of TKIs (14,15,18,22,23). The most recent study by Seesing et al. reported an R0 resection rate of 56% and its significant prognostic relevance by both uni- and multivariate analyses (14). Brudvik et al. as well as Turley et al. reported R0 resection rates of 96% and 92% respectively, but failed to evaluate the actual influence of R0 resections as a predictor of OS (15,18). Although the study by de la Fuente reported an R0 resection rate of 59% that could have potentially provided valuable information on its prognostic value, the authors did not proceed with a specific analysis (19). Of note, a recently published large series of patients with metastatic disease from large-volume European centers also highlighted the importance of R0 resections. R0/R1 vs. R2 surgeries had a median OS of 8.7 vs. 5.3 years respectively (P=0.001), resulting in a survival benefit of approximately 3 years (25). The results of these studies highlight the importance of a step-wise approach with neo-adjuvant TKIs followed by complete surgical resections. The characteristics of patients who could potentially benefit from a debulking approach based on either poor/no response or from progression of disease still remain to be determined.

A previous review by Zalinski et al. proposed a combination of TKI treatment and hepatic resection, highlighting the importance of neoadjuvant TKI therapy in the selection of patients suitable for resection (27). Similar observations were reported in the review by Ye et al. who described an increased possibility of R0 resections with the introduction of TKI therapy (28). Finally, another recent review reported that patient selection in combination with timing of resection based on the outcomes of TKI treatment constitutes the most crucial factors in the management of GIST patients with liver metastasis (29).

The great heterogeneity in the studies considered, combined with the small number of patient described, prevented us from reaching further conclusions. Surgical resection combined with TKIs in the adjuvant and neo-adjuvant setting seems to constitute the most efficient treatment. Further well-designed prospective randomized controlled studies are needed to determine which patients with metastatic disease from GISTs will benefit from this multidisciplinary approach as well as to define the optimal sequence and duration of treatment.