Primary rectal squamous cell carcinoma (SCC) is a very rare entity making up to 0.1–0.25/1,000 cases of all colorectal cancers. Although rectal SCC is a well-established entity, the pathophysiology and risk factors remain largely unknown. Diagnostic criteria are based on the widely-accepted Williams exclusion criteria. Prompt diagnosis may be delayed due to the subtle and non-specific manifestations such as pelvic discomfort in an elderly or change in bowel movement pattern. There are no biological markers for rectal SCC and definite diagnosis requires tissue biopsy. Fine needle aspiration (FNA) via rectal endoscopic ultra sounds (EUS) is the proposed modality of choice. Chemoradiation with or without surgery (neoadjuvant) are the main treatment options which are offered based the tumor properties and patient’s preference and functional status.

Patient is a 63-year-old otherwise healthy female with a history of uterine fibroids, status post hysterectomy who was initially seen by her PCP for pelvic discomfort. She reported a dull constant pelvic discomfort with no associated symptoms. Her physical exam and basic labs were unremarkable thus she was sent home with conservative treatment. Few weeks later, she developed constipation with a change in the stool caliber. She was started on laxatives, which seemed to help to improve her bowel movements; however, pelvic discomfort persisted. Abdominal ultrasound was ordered which was reportedly normal and fiber supplement and probiotics were added to the regimen. Her pain worsened and she was seen in an urgent clinic for pain control where a CT of abdomen and pelvis was ordered that showed a necrotic 5cm pre-sacral mass, contiguous with the adjacent rectosigmoid colon concerning for an exophytic primary colon cancer. CBC, CMP, CEA and CA19-9 were all within normal limits. She was scheduled for Colonoscopy which showed a submucosal nonbleeding 4 cm mass in the mid rectum (Figure 1). The mass was noted to compress the lumen, but the scope was able to traverse the lesion. Biopsies of the overlying mucosa were not diagnostic. Anal mucosa was completely normal and no suspicious lesion was identified during the procedure. Given diagnostic uncertainty, MRI was ordered and showed a 6.5 cm peripherally enhancing centrally necrotic irregularly marginated mass posterior to the rectum, without sacral invasion, obstruction, adenopathy or free fluid. Endoscopic ultrasound showed a complex mass with central necrosis .Then, fine needle aspiration (EUS-guided FNA) from the solid part of the mass was performed (Figure 2) and revealed clusters of malignant cells with intercellular bridges and focal keratinization (Figure 3). Immunohistochemistry staining showed the tumor cells were positive for p16, p40 (Figure 4) and p63, but negative for CK7, CK20, CDX2 and CD117 which further supported the diagnosis of moderately to poorly differentiated SCC. The presence of p16 positivity indicated that the tumor was likely associated with high risk HPV infection. PET scan showed intense tracer activity solely within the periphery of the presacral mass and no metastatic disease was seen. Oncology and colorectal surgery services were consulted and neoadjuvant chemoradiation with (platinum-based regimen) and tumor resection was recommended. She completed her course of platinum-based neoadjuvant chemoradiation and her tumor was successfully resected. Patient has been asymptomatic since surgery and is following up with oncology clinic for tumor monitoring and further management. 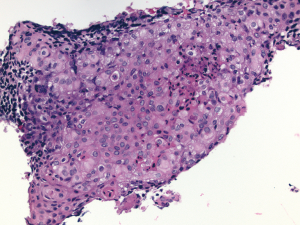 Rectal malignancies make up to 15% of all colon cancers and include carcinoid tumors, gastrointestinal stromal tumors (GIST), primary rectal lymphoma, leiomyosarcoma, and SCC (1). Primary SCC of the rectum is a very rare entity making up to 0.1–0.25/1,000 cases of all colorectal cancers first described by Schmidtmann et al. in 1919 (1). In 1979, Williams et al proposed three criteria that are commonly accepted for the diagnosis of primary SCC of the rectum. First, metastases from other sites must be ruled out. Second, a squamous cell-lined fistula must not involve the affected bowel. Third, a SCC of the anus extending to the rectum must be excluded (2). The etiology of colorectal SCC is still unclear; however, chronic inflammation (infectious or autoimmune) may play a pivotal role. Some experts proposed the idea of stem cells, uncommitted basal cell or even adenomas transformation in to SCC in an inflammatory milieu. Others described an association between SCC and inflammatory bowel disease, HPV infection, helminthic infection (particularly amebiasis and schistosomiasis), prior radiation and immunosuppression (3-7). Rectal SCC is more prevalent in the sixth decade of life and is slightly more predominant in females.

Rectal SCC can clinically present with pelvic discomfort, rectal bleeding, constipation, rarely local or distant metastasis and paraneoplastic syndrome (such as hypercalcemia). The diagnostic work up usually begins with basic labs such as CBC, CMP, tumor markers (CEA, CA 19-9) and imaging studies such as CT or MRI based on the presentation. Definite diagnosis requires tissue. Colonoscopy or sigmoidoscopy often times suffices unless the lesion is submucosal, as in our case. EUS is the modality of choice for diagnosis and staging of submucosal rectal malignancy and adjacent pre-sacral masses. Care must be taken to avoid infecting these lesions and tumor cells seeding along the biopsy track is always a concern. However, in majority of the cases, surgery will be performed and the biopsy track will also be removed.

Treatment of rectal SCC is not well defined and relies on expert opinion. Overall, rectal SCC has a worse prognosis than adenocarcinoma and features associated with poor prognosis are ulcerated or annular carcinomas, node-positivity, and advanced stages (8). While many consider surgical resection the gold standard, some believe that chemotherapy with or without radiation may be curative, and some believe in neoadjuvant chemoradiation prior to tumor resection (9-13). It is best to individualize treatment based on patient functional status, concurrent comorbidities, tumor staging and local invasion.

In summary, primary rectal SCC is a rare entity with unclear etiology that often clinically present with bleeding, constipation and pelvic discomfort. Unfortunately, the prognosis is worse than adenocarcinoma and no consensus exists for treatment. In our case, the right diagnosis was achieved by endoscopic ultrasound and our patient is undergoing neoadjuvant chemoradiation before her potentially curative surgery.

Informed Consent: Informed consent was obtained from the patient in writing for the publication of this case report and the accompanying images. A copy of the written consent is available for review and can be obtained from the Editor-in-Chief of this journal on request.