The abscopal response is a phenomenon in which radiation therapy (RT) can elicit immune responses that mediate regression of metastatic disease distant from the radiation (1-3). This effect has been observed in a variety of cancer types (4), but has not been described in squamous cell carcinoma of the anus (SCCA). Indeed, only one case of the abscopal effect in squamous cell carcinoma has been reported, involving the uterine cervix (5). The incidence of anal cancer is on the rise, with approximately 27,000 incident cases globally (6,7). Distant metastasis has been observed in 5–8% of cases at initial presentation and in 10–20% of cases after curative local treatment (8). Due to the rarity of metastatic SCCA, evidence-based guidelines defining optimal treatment are lacking, and the first randomized trial is likely not to be reported for many years (9). A common feature of SCCA is the presence of human papilloma virus (HPV) infection, seen in 80–90% of patients with SCCA (10). Viral proteins may be expressed by SCCA and contribute to an immune response (11). The mechanisms behind the abscopal effect are thought to involve induction of a systemic anti-tumor immune response which may be mediated by secretion of effector cytokines, immunogenic cell death and release of neoantigens recognized by the adaptive immune system (2,3,12-14). This report will describe the first case of the abscopal effect in anal cancer and discuss potential implications for clinical research. 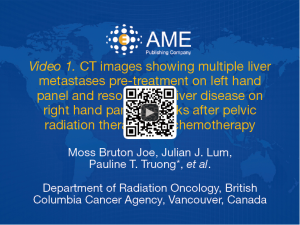 After multidisciplinary review, the patient was offered high dose palliative radiation to the pelvis with concurrent chemotherapy as a radiation sensitizer, with the aim of providing long-term symptom control. Using CT-based 3-D conformal planning, RT encompassed the primary anal tumour, affected pelvic lymph nodes, and iliac bone metastasis. A total dose of 54 Gy in 30 fractions (1.8 Gy/fraction) was delivered to the primary tumor, and 50.4 Gy to the nodal and bone metastases. The liver was not treated with RT. Chemotherapy consisted of capecitabine 750 mg/m2 twice daily on each day of RT, and Mitomycin C 10 mg/m2 on days 1 and 28. All treatment was completed in April 2013 with minimal toxicity.

Follow-up assessment including history, physical examination, and CT scans at 4, 7, and 10 months post therapy, and subsequently every 6–12 months found no evidence of disease. In January 2016, a transient rise in squamous carcinoma antigen to 2.5 µg/L was observed. This was evaluated with PET imaging February 2016 demonstrating no evidence of disease (Figure 1B). The squamous carcinoma antigen subsequently returned to normal levels without intervention. On the last follow-up visit in February 2017, there were no symptoms or signs of recurrent disease. PET scan in March 2017, 4 years after treatment, shows no evidence of disease (Figure 1C). 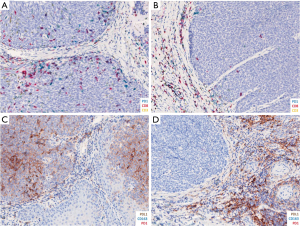 Figure 2 Multi-parametric immunostaining images showing (A) staining of PD1-blue, CD8-red, and CD3-yellow in the tumor; and (B) in the stroma. Expression of PDL1-brown is shown in (C) the tumor; and (D) stromal macrophages. Magnification: 20×.

Treatment for patients with metastatic SCCA is not well defined (8). Depending on symptoms and location of disease, options may include chemotherapy and palliative RT (8). Available data are limited to retrospective studies with small samples reporting short median survival of 8–12 months (7). Patients presenting with small volume distant disease may be eligible for aggressive local treatment of the metastatic lesions, with a median progression free survival of 16 months, compared to 5 months with palliative chemotherapy alone (7). The current case, presenting with multiple liver metastases, treated with pelvic RT and radiosensitizing chemotherapy resulting in long-term complete remission is unique. We hypothesize that the local pelvic RT provoked an abscopal immune response resulting in complete resolution of the liver metastases.

The possibility that the hepatic lesions were metastatic anal carcinoma that responded completely to capecitabine and mitomycin at radiosensitizing doses was also considered. However, a United Kingdom randomized trial of chemoradiotherapy for localized disease used a comparable regimen of 5-fluorouracil (5-FU) and mitomycin plus RT failed to demonstrate a reduction in distant metastasis compared to RT alone (17), suggesting the chemotherapy regimen used in our case was highly unlikely to produce a complete response in the overt metastatic disease. In addition, studies of palliative chemotherapy regimens with dose-intense schedules have reported response rates of approximately 50%, with complete response rates in the range of 6–20% (7,18,19). Typical palliative chemotherapy regimens for metastatic SCCA are cisplatin and 5-FU, or carboplatin and paclitaxel (7,8). In a retrospective study of 77 patients with metastatic SCCA, the median progression free survival and overall survival were 7 and 22 months respectively with chemotherapy alone (7). Our literature search identified only a single report describing complete, prolonged response to palliative chemotherapy in a patient who received six cycles of cisplatin and 5-FU and was cancer-free for seven years after treatment (20).

Local pelvic RT triggering an abscopal immune response resulting in complete regression of the liver metastases is a strong consideration in this case. The dense infiltration of lymphocytes observed within the tumor and the stroma suggests a strong immune response in this patient’s disease. That the tumor cells stained strongly for PDL1 suggests that immune checkpoint inhibition was keeping the host response at bay. The mechanisms responsible for this response may have included an attenuation of the immune checkpoint inhibition through downregulation of PDL1 expression, as well as presentation of viral neoantigens. Although it would have been interesting to have biopsy samples from the metastatic liver lesions before and after pelvic RT, it was not possible to have recognized beforehand that this patient was going to have a dramatic metastatic response.

While the mechanisms behind the abscopal effect are not entirely understood, many hypotheses have been explored. It is generally thought that local RT enhances the ability of the immune system to recognize and respond to a distant cancer (3,14), as though the tumor were induced to become an in-situ vaccine against itself and its related metastases. In addition to spatial anti-tumor effects, temporal immune effects might prevent proliferation of clones emerging from a dormant state. Various mechanisms have been proposed, including alterations of antigen presentation, T-cell activation, cytokine release and alteration in checkpoint inhibition (2,3,10,11,21-24). As the majority of SCCA are related to HPV infection, it is tempting to speculate that viral oncoproteins expressed by the tumor may act as antigens for immunotherapies (10).

A promising avenue to explore in SCCA treatment is the role of immune checkpoint inhibitors, the expression of which may allow cancer to evade immune detection. Checkpoint inhibitors such as cytotoxic T lymphocyte associated antigen 4 (CTLA-4), PD1, and PDL1 may be overexpressed in cancer cells as was seen in this case. Local RT has been reported to decrease the expression of PDL1 thereby modulating the immune inhibition (25). In a retrospective study, Morris et al. reported that 56% of 41 patients with SCCA had PDL1-positive disease (10). A phase II trial of nivolumab, an anti-PD1 antibody which prevents the interaction between PD1 and its ligand PDL1, disrupting the inhibited T-cell immune response, enrolled patients with metastatic SCCA refractory to palliative chemotherapy. Of 37 trial participants, two had complete response and seven had partial response (11).

Interestingly, most of the research on the potentiation of the immune system has focused on hypofractionated RT employing large doses of >2 Gy per fraction (25). While some investigators have suggested that hypofractionation is associated with a stronger immune response (26), others have reported that conventional RT fractionation with 1.8–2 Gy per fraction such as that used in the current case, is associated with higher levels of interactions with the immune system (27). Research evaluating the interactions between different RT regimens and immune potentiation is thus needed.

The case described contributes the first report of the abscopal effect in squamous cell cancer of the anal canal. The observations in this case suggest that the abscopal phenomenon represents an exciting avenue of research that may improve insight into the interactions between RT and the immune response and may lead to the development of new therapeutic strategies that utilize the synergies of these two modalities. Metastatic SCCA may be a promising clinical model for such studies due to its association with viral oncoprotein expression. For patients with metastatic SCCA, an orphan disease with limited treatment options, trials to evaluate the effect of immune checkpoint inhibitors and RT to provoke heightened abscopal response are warranted.

We thank the subject of this case report for providing written informed consent and the Molecular Cancer Immunology Core for help with staining samples.

This work was supported by funds from the Canadian Institute of Health Research (JJ Lum).

Informed Consent: Written informed consent was obtained from the patient for publication of this manuscript and all accompanying images.