A 59-year-old man with diabetes mellitus, prior hepatitis B infection, recently diagnosed cirrhosis and human Babesiosis presented to our institution from an outside hospital with six months of worsening abdominal pain, myalgias and fevers. His medical history revealed a diagnosis of non-insulin dependent diabetes mellitus controlled with oral hypoglycemics. Approximately five months before admission, he presented to an outside hospital with fevers, jaundice and arthralgias. Initial laboratory workup showed abnormal liver-function tests and elevated total bilirubin; other results are shown in Table 1. Serological tests were negative for hepatitis viruses A, C, D and E. He did however have evidence of prior hepatitis B virus infection with negative HBsAg. The patient was negative for human immunodeficiency virus (HIV), herpes simplex virus (HSV) 1 and 2 DNA, Erhlichia chaffeensis/canis/ewingii, cytomegalovirus (CMV) IgM, Epstein-Barr virus (EBV) IgM and Leptospirosis. Babesia microti IgM returned positive at 1:320. Workup for autoimmune disease was negative (ANA, ANCA, Liver-kidney microsome and AMA) except for anti-smooth muscle antibodies, which were positive at 1:20 dilution. Lastly, serum ceruloplasmin and alpha-1-antitrypsin levels were normal. Abdominal MRI showed a normal liver without nodularity or steatosis but marked splenomegaly measuring 20 cm. Given the patient’s hepatitis of unclear etiology, a liver biopsy was performed that revealed extensive active inflammation involving the portal regions and hepatic lobules. No significant iron deposition or fatty change was present. The trichrome stain revealed fibrosis. He was subsequently diagnosed with cirrhosis of unknown etiology. With evidence of active Babesial infection, he was treated with atovaquone and discharged home.

Due to the uncertain source of his cirrhosis and persistent symptoms of anorexia with fatigue, repeat comprehensive laboratory testing was performed two months prior to admission to our institution. These studies were remarkable for prior hepatitis B infection evidenced by negative HBsAg, positive HBsAb, positive HBcAb and subsequent undetectable HBV DNA as well as mildly elevated Babesia microti IgM at 1:40 without detectable Babesial DNA by PCR analysis. Given the patient’s history of diabetes mellitus in the absence of prominent alcohol use, non-alcoholic steatohepatitis (NASH) was considered as a possible etiology of his cirrhosis. Liver biopsy however did not show any evidence of steatosis. He was subsequently referred to outpatient infectious disease clinic given his persistently elevated Babesia titer but was lost to follow-up. 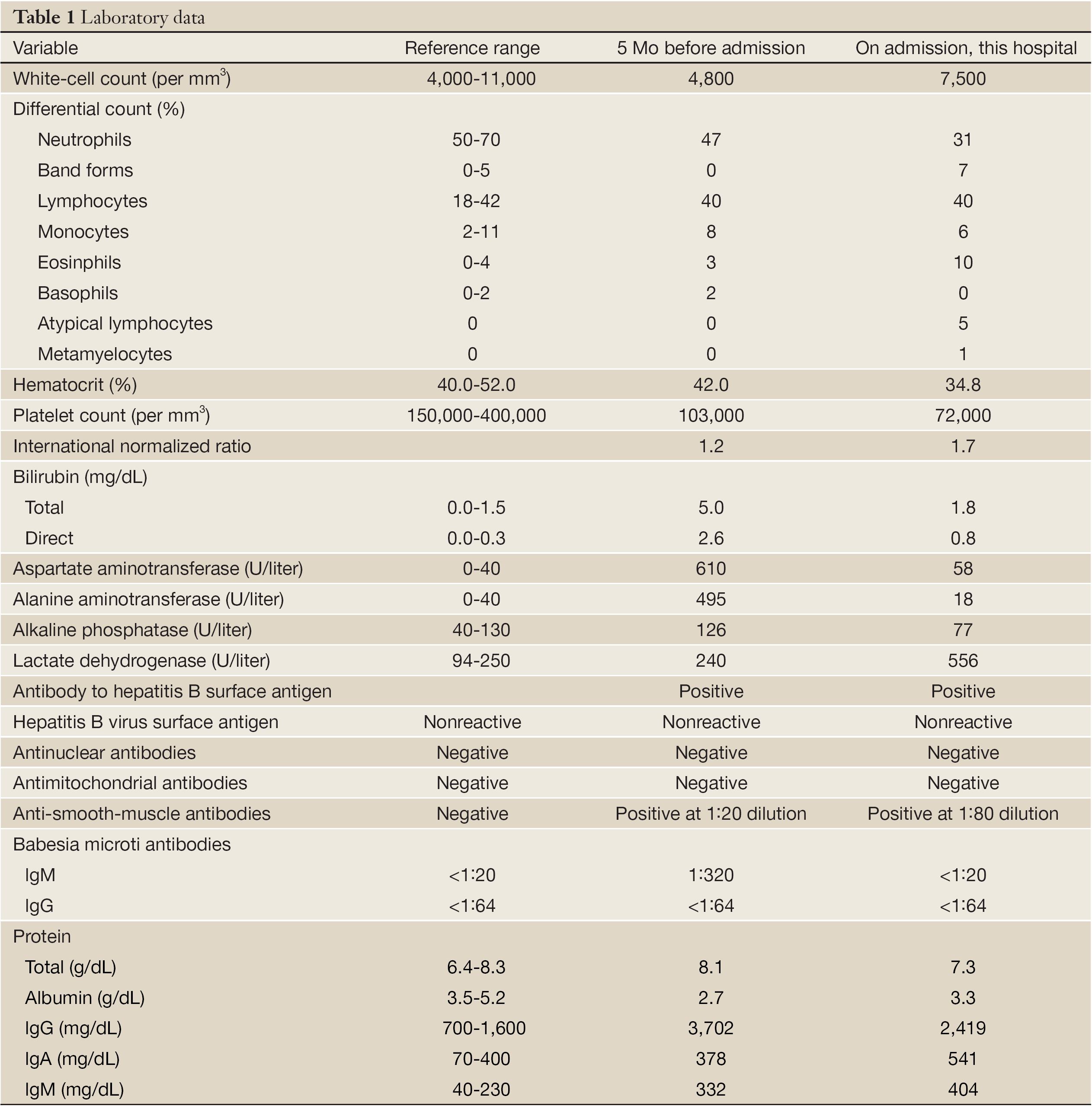 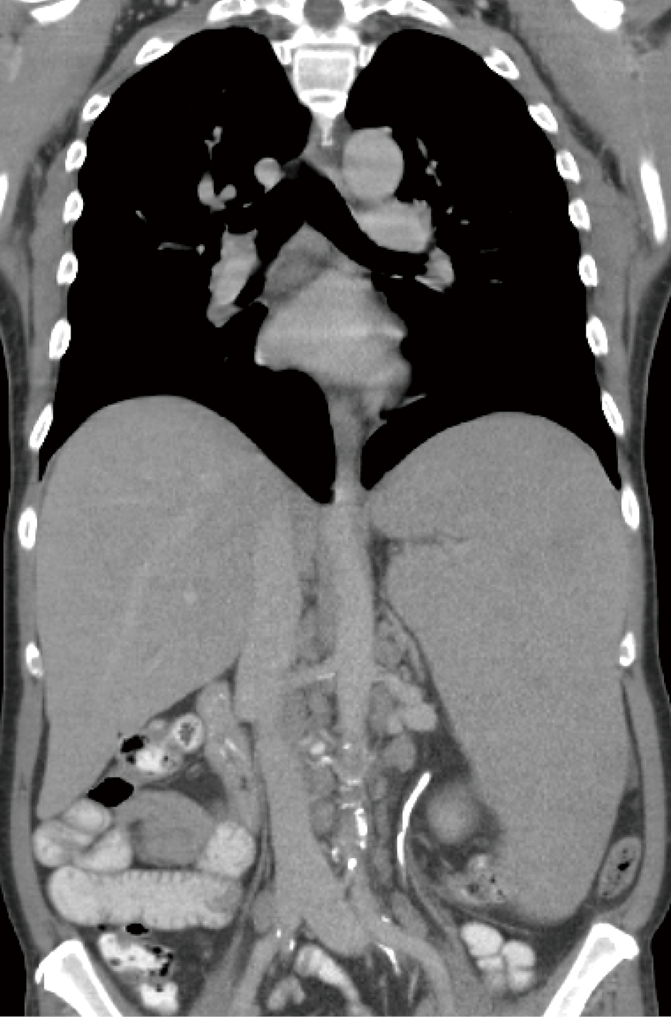 Figure 1 A coronal view of the chest and abdomen obtained with the administration of contrast material, shows a cirrhotic liver with massive splenomegaly

Notably, the patient’s initial liver biopsy from five months prior to presentation was obtained from the outside hospital and re-evaluated by our institution’s pathologists. Histologic analysis showed sinusoidal and portal infiltration with atypical lymphocytes morphologically identical to those present on the more recently excised nodal tissue (Figure 2). The lymphocytes infiltrating the liver were strongly positive for CD2, CD3 and CD5, while CD4 and CD8 stained only small subsets. A fraction of the cells were immunoreactive for granzyme, perforin and TIA1 (Figure 3). Thus, monomorphic, phenotypically aberrant T lymphocytes, were already present in the patient’s liver at the time of his initial diagnosis of cryptogenic cirrhosis. Together, these findings were consistent with a final diagnosis of primary hepatosplenic T-cell lymphoma (HSTCL) of the alpha/beta subtype. 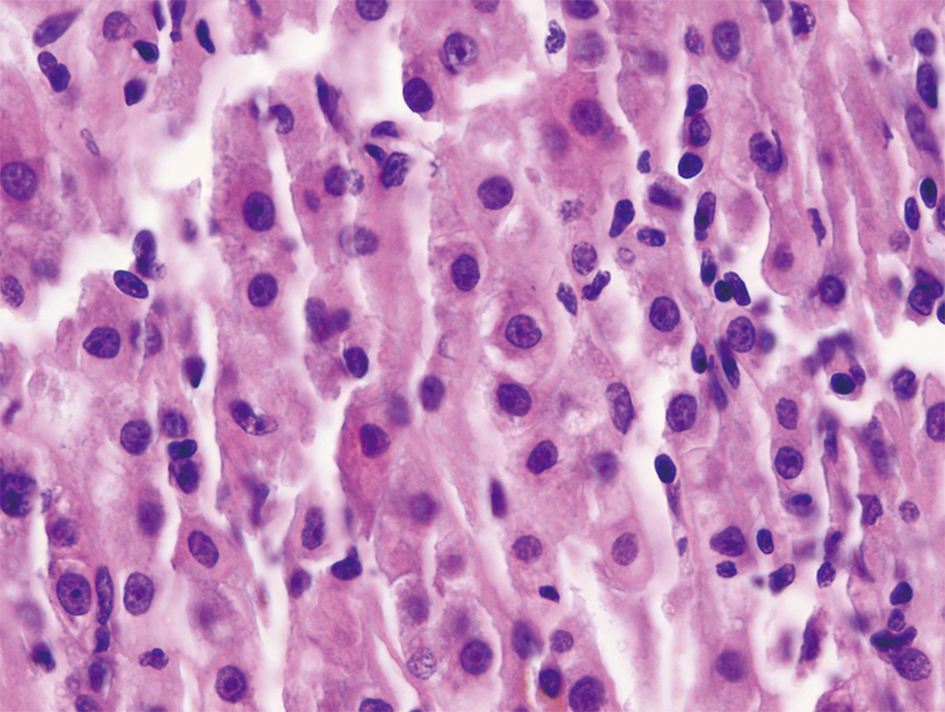 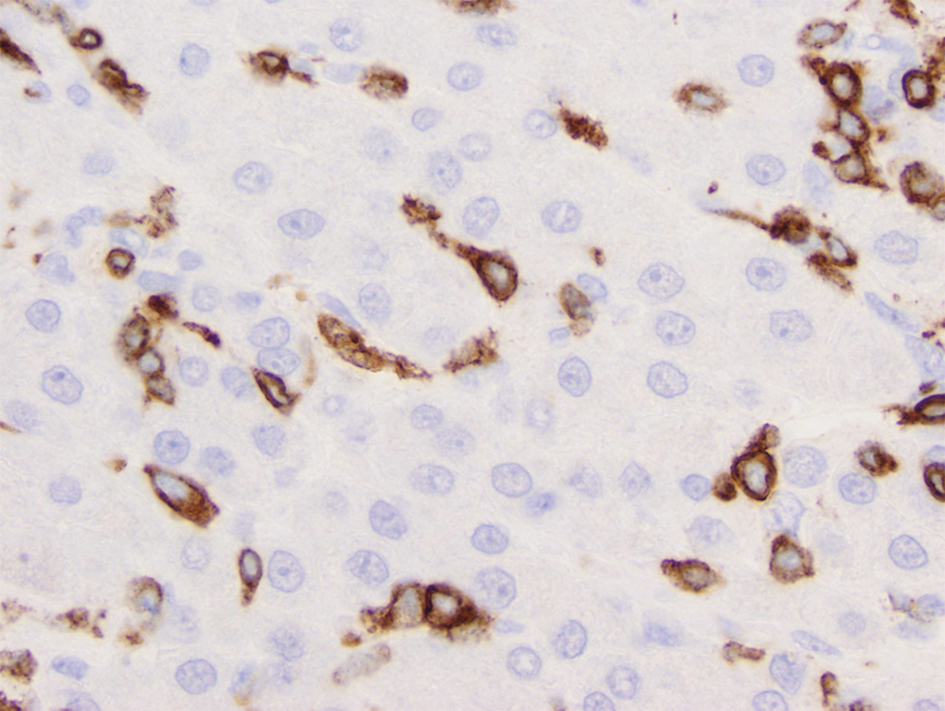 Given bone marrow involvement, he was diagnosed with stage IV disease and treated with two cycles of EPOCH (etoposide, vincristine, doxorubicin, cyclophosphamide and prednisone) followed by two cycles of alemtuzumab/cladribine and pentostatin. His clinical course involved multiple hospitalizations complicated by hyponatremia, neutropenic fevers and pulmonary emboli. Following his fourth cycle of chemotherapy, he developed worsening liver failure and expired approximately three months after diagnosis of HSTCL.

HSTCL was first described in 1990 and is a rare malignancy and accounts for less than 1% of all non-Hodgkin’s lymphomas (1). HSTCL predominantly affects young males with median age at diagnosis of approximately 35 years (2). While the pathogenesis of HSTCL is largely unknown, there is an association with chronic immune suppression, particularly in patients who are on immunosuppressive agents for solid organ transplant, lymphoproliferative disorders, or inflammatory bowel disease. Anti-tumor necrosis factor therapies have been implicated especially in patients with Crohn’s disease (3). However, up to 80% of cases of HSTCL occur in patients without chronic immune suppression. Associations with viral infections such as hepatitis B virus and EBV have only been reported in several cases (4-6). While the clinical presentation of HSTCL is variable, most patients initially present with prominent hepatosplenomegaly and thrombocytopenia in the absence of prominent lymphadenopathy (7). Abnormal liver-function tests as well as constitutional symptoms such as fevers and anorexia are also common. Histologically, HSTCL is characterized by sinusoidal infiltration of T-cells in the liver, spleen and bone marrow. In most cases, tumor cells express CD2 and surface CD3 while CD4, CD8 are absent. Cytogenetics frequently reveal isochromosome 7q or trisomy of chromosome 8 (8). Most tumors exhibit the gamma/delta TCR but few cases such as with our patient express the alpha/beta TCR instead. While HSTCL is already very rare with only several hundred cases reported in the literature to date, less than 30 cases of the alpha/beta subtype have been described (5).

Complicating and perhaps delaying the diagnosis of HSTCL in our patient was the presence of active Babesia microti infection at the time his initial presentation and diagnosis of cirrhosis. Furthermore, diffuse infiltration of liver parenchyma has been described in both hematologic and solid tumors which can mimic cirrhosis clinically as well as radiographically (9,10). This clinical presentation has been described as pseudocirrhosis, and is most commonly seen with hematological malignancies, notably in non-Hodgkin’s lymphoma (11). Reports implicate the desmosplastic response to infiltrating tumor cells as the cause for extensive fibrosis seen in several cases of pseudocirrhosis (12).

In retrospect, our patient’s history of diabetes mellitus was likely a confounding characteristic, which contributed to suspicion of NASH as a potential etiology of his cryptogenic cirrhosis. While absence of steatosis on biopsy strongly challenged metabolic liver disease as an explanatory diagnosis (13), the patient was unfortunately lost to follow-up before further investigations could be conducted. Additionally, invoking prior hepatitis B virus infection as a contributing factor in the development of his malignancy is plausible however only associations with active hepatitis B infection and HSTCL have been reported in the literature (5,14). Of note, the patient’s social history was remarkable for having sex with men in the absence of intravenous drug use or blood transfusions which may explain how he contracted hepatitis B. Alternatively, based on a simplified scoring system for autoimmune hepatitis (incorporating titers of autoantibodies, IgG levels, liver histology, and the exclusion of active viral hepatitis), a diagnosis of autoimmune hepatitis was possible in our patient however infiltrating plasma cells on liver biopsy were notably absent (15). While there are only three previously reported cases of hepatosplenic T-cell lymphoma presenting with autoimmune hepatitis, it is unclear whether the initial diagnosis was correct or whether lymphoma was present all along with incidentally positive autoimmune hepatitis serologies (16-18). Interestingly however, mechanistic links between autoimmunity and tumorigenesis have been described in many other lymphomas (19). Finally, other cases have been reported of hepatosplenic T-cell lymphoma that mimic acute hepatitis in the absence of viral, toxic, autoimmune or metabolic etiologies (20,21).

HSTCL is an aggressive malignancy with a median survival of less than two years (22). While patients often initially respond to chemotherapy, remissions are typically short lived before relapse occurs. If patients achieve a complete remission with chemotherapy, autologous or allogeneic hematopoietic cell transplantation should be considered. Most patients described in the literature undergo induction therapy with EPOCH or CHOP (cyclophosphamide, doxorubicin, vincristine, prednisone) with or without etoposide. One report suggests that patients with HSTCL might respond well to an experimental combination therapy of purine analogue, cladribine, and anti-CD52 antibody, alemtuzumab (23), while another report demonstrated therapeutic benefit of antimetabolite, pentostatin which were all utilized in the treatment of our patient (24). Finally, in some cases splenectomy is performed, however only modest improvement of median survival has been observed (25,26).

HSTCL is a rare malignancy with largely unclear risk factors and heterogeneous clinical presentations. The diagnosis of HSTCL in this patient was challenging given the concomitant presentation of Babesiosis and cirrhosis. In retrospect, recognition of the absence of histologic confirmation of NASH or autoimmune hepatitis on initial liver biopsy could have led to an earlier review of the pathology, which ultimately revealed a sinusoidal pattern of monomorphic lymphoid cells. Given its rapidly progressive clinical course, early detection of this lymphoma is important and should be considered in the evaluation of patients in whom the etiology of cirrhosis remains in question.