Breast cancer is the most common malignancy in women. Its most frequent metastatic sites are lung, bone, liver and brain. Metastasis to gastrointestinal tract is rare but when it happens, the stomach is one of the most frequent sites. The synchronous bilateral breast cancer (SBBC) occurs rarely. Its incidence is estimated to 1% to 3% of all cases of breast cancer. Lobular breast cancer, which represents 4% to 10% of all breast cancer, is more often associated with SBBC and with gastric metastases than other histological types (1-4). To distinguish between primary gastric cancer and gastric metastasis of breast cancer is crucial since the differences in further management.

This study aims to analyze the epidemiological, anatomoclinical and therapeutic particularities of this rare entity.

In this retrospective study, we reviewed the medical records of four patients diagnosed as having gastric metastases from bilateral synchronous breast cancer, treated in the Salah Azaiez Institute from 2000 to 2010. It was considered as SBBC, the occurrence of carcinoma in the two breasts at diagnosis with no time lag. The diagnosis of gastric metastasis of the SBBC was confirmed by a histopathological examination of an endoscopic biopsy. The following information were recorded: age, stage, histological type, grade, hormone receptor status, HER-2/neu status, Ki-67 expression by immunohistochemistry, previous therapies, presenting symptoms, presence of other metastatic sites, endoscopic findings and time lag between the diagnosis of the primary cancer and the gastric metastasis. Treatment and outcome were also analyzed. Overall survival (OS) was defined as the time from the date of diagnosis of gastric metastasis until the date of death from any cause. Surviving patients were censored at the date of last follow up. Kaplan-Meier curves were used to calculate the median OS.

The patient characteristics are shown in Table 1. In one patient, gastric metastasis has been discovered in the initial evaluation, whereas in three patients, it appeared during the course of the disease. Gastric involvement was the only metastatic site in one case. The median age was 46.2 years (range, 36–51 years) and the median time until the gastric involvement was 19 months (range, 0–41 months). Treatment of primary breast cancer consisted on radical mastectomy with lymph node dissection for three patients. Two patients had lobular infiltrant carcinoma (Figure 1), another patient had mixed histology with either intraductular or lobular carcinomas and the last case had a ductal infiltrant carcinoma (Figure 2). Lymph nodes invasion was found in all cases. All patients had positive hormone receptors (hormone receptors to estrogen and/or progesteron expressed in at least 10% of tumoral cells). HER-2/neu was performed in only two cases with a negative status (score =0). All patients with gastric metastases presented non-specific gastrointestinal symptoms such as nausea, vomiting and abdominal pain. For all cases, a gastric endoscopy was undergone at clinical presumption. Endoscopic macroscopic findings were linitis gastric in two cases and gastric ulceration in the other ones. All gastric metastases had been confirmed by a histopathological examination of an endoscopic biopsy. Immunohistochemistry on gastric samples concluded on the positivity of hormonal receptors on all cases. HER-2/neu status was explored in only two cases and it was negative. Cytokeratin 7 and 20 were assessed in two cases: CK-7 was positive in the two patients and CK-20 in only one (Table 2). None patient had a surgical treatment for the gastric location. All patients received at least one line of chemotherapy and radiotherapy. The median survival following the detection of gastric involvement was 22 months (range, 1–56 months). 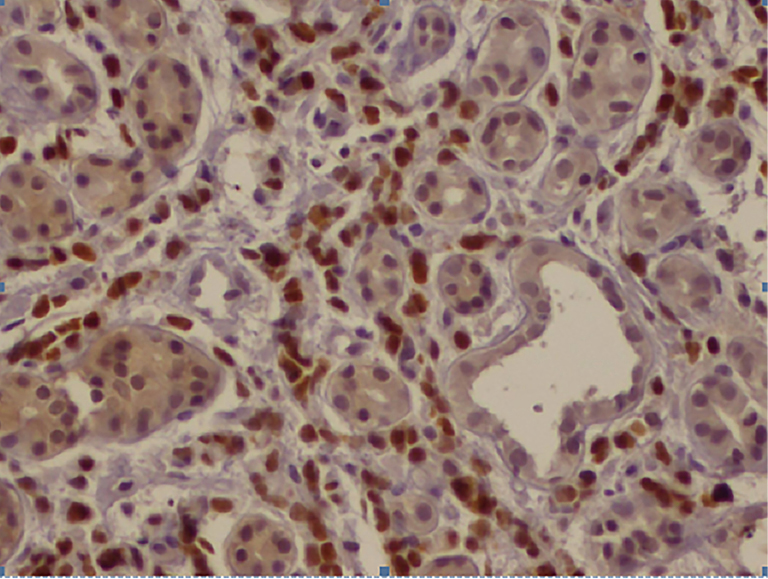 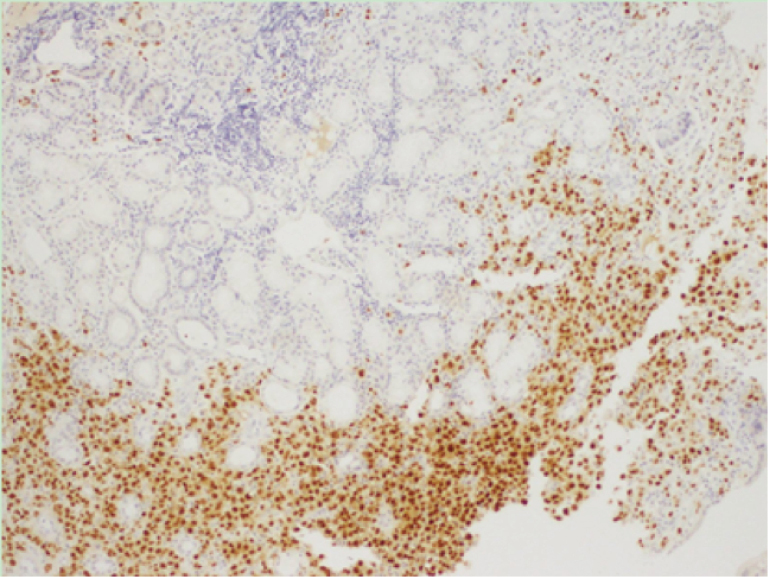 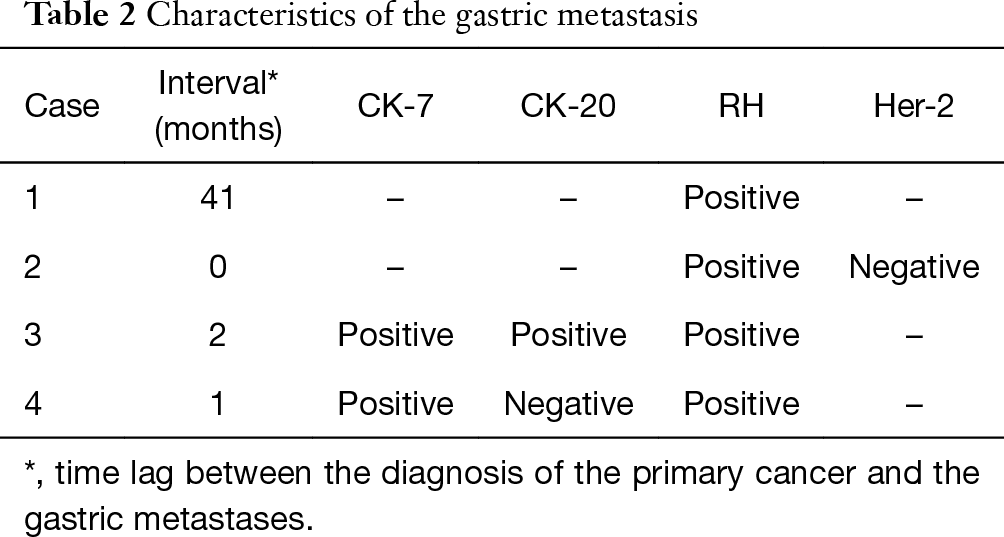 The number of women developing bilateral breast cancer is increasing due to the improvement in diagnosis and treatment modalities. However, the incidence doesn’t exceed 10.2% in most series reported in the literature (5,6).

Lobular infiltrating carcinoma (LIC) represents up to 17% of bilateral breast cancers while it doesn’t exceed 10% for all breast cancers. Several studies suggest that the risk to develop SBBC is more increased with LIC than with invasive ductal carcinoma (10,11).

Lobular infiltrating breast cancer is also known to specifically give rise to gastric metastasis (12,13). Indeed, Borst and Ingold compared metastatic patterns of invasive lobular versus invasive ductal carcinoma of the breast (2). Among 2,605 cases of invasive lobular and invasive ductal breast carcinoma, only 359 (14%) had lobular carcinoma responsible on much higher metastatic rates notably on gastrointestinal tract than other histological subtypes. Besides, this study showed lobular carcinoma metastasizing more frequently to gynecologic organ and peritoneum-retroperitoneum (2). Also, Almubarak et al. series (14), which included 35 patients with gastric metastases of breast cancer, reported a LIC in 97% of patients. In our study, a lobular infiltrating compound was found in three cases.

Stomach is one of the most frequent gastrointestinal metastatic sites. In McLemore et al. study (1), including 12,001 patients with metastatic breast cancer, followed during 15 years, gastric involvement accounted for 28% of gastrointestinal tract’s metastases.

Gastric metastasis is often a part of a disseminated disease. In fact, other metachronous or synchronous metastatic localisations can be found. Mubarak et al. (14) reported 65% of bone metastases, 57% of peritoneal carcinomatosis and 5% of hepatic localisation. In Taal et al. (4), metastases had been previously encountered in bone (48%), skin (7%), lung (3.7%), and other tissues (18%). In our study, metastasis to peritoneum was found in two cases, bone was involved in three cases and one patient had hepatic metastasis.

An endoscopic evaluation has to be done at any gastric symptom with a history of breast cancer. Endoscopic and radiological aspects are nonspecific. Linitis plastica is the most common finding on endoscopy. Nodules, ulceration or external compression can also be found (15), which joins the results of our study. Since endoscopy may not find abnormalities on half of the cases, gastric metastases may be underestimated. The distinction between primary gastric carcinoma and metastatic event must rely on detailed immunohistochemical analysis. CK7, GCDFP-15, carcinoembryonic (CEA), estrogen and progesterone receptors are usually positive on gastric metastases of breast cancer. CK20 is often expressed in gastrointestinal tract primary cancers while it’s usually negative in breast cancers (16). CK7 in contrast is extensively expressed in 90% of breast carcinomas and its expression was also observed in 50–64% of primary gastric adenocarcinoma (17). In our study, hormone receptors were positive in all cases. Cytokeratin was evaluated in two cases, CK7 was constantly positive while CK20 was positive in only one. Breast cancer with gastric metastasis is a systemic disease associated with a poor prognosis. Treatment is based on chemotherapy and/or hormonal therapy. Surgical gastric resection is reserved to patients with obstruction or bleeding or in case of a unique metastatic site.

In McLemore et al. series (1), surgical intervention haven’t been found to improve significantly the survival (28 vs. 26 months). However, patients with exclusive metastases to the gastrointestinal tract who underwent palliative surgical resection tended to have a more prolonged median survival (44 vs. 9 months) but not statistically significant. In our observation, none of patients had a gastric surgery.

Hormone receptors status, prior treatment, presence of visceral crisis, age and performance status are choice criteria for systemic treatment. Three of the present cases received palliative anthracycline based regimens and one patient received hormonal therapy (tamoxifen). In our study, the median survival from the time of diagnosis of gastric metastases was 22 months, similar to those reported by McLemore et al. (1) (28 months) and Ayantunde et al. (18) (20 months). Moreover, in the series of Taal et al. (4), 22% of the patients survived more than 2 years, in ours survival exceeded 2 years in two patients.

Gastric metastases from breast cancer are rare and frequently associated with other distant metastasis. Symptoms are unspecific and endoscopy may not be contributive. Therefore, gastric involvement is underestimated. LIC is the most histological type incriminated in its occurrence. The supply of immunohistochemistry is crucial to distinguish between primary or metastatic gastric cancer.

Informed Consent: According to Tunisian law, patient consent is not mandatory for retrospective studies.