According to the latest data from the National Cancer Registry, approximately 769,000 new cases of gastric cancer (GC) were recorded in China, and approximately 498,000 deaths from GC occurred in 2015; hence, GC is a major disease that seriously harms the health of the Chinese population (1,2). The incidence of diabetes has also gradually increased, and it has become the fifth leading cause of death in the world (3). Sekikawa et al. (4) found that type 2 diabetes mellitus (T2DM) can increase the risk of GC. Moreover, the risk of GC in patients with diabetes in China is higher than that of patients without diabetes (5). Diabetes and GC have a close relationship. Patients with diabetes are hyperglycaemic for a prolonged period, making them unpreventably susceptible to Helicobacter pylori infection (6), thus increasing the incidence of GC turn. Other factors that increase the incidence of GC include hypoglycemic drugs, insulin resistance, and hyperinsulinemia. Studies on diabetes and cancer prognosis have confirmed that diabetes increases the risk of death caused by cancers like colorectal cancer and GC (7,8), but whether diabetes is an indicator of a poor prognosis for GC patients remains unclear. This study used a propensity-matching method to match the clinical features of patients with GC and T2DM, balanced the effects of covariates between groups, performed survival analysis on matched data, objectively evaluated the prognostic effect of diabetes, and explored the difference between GC patients with and without diabetes. We present the following article in accordance with the SRTOBE reporting checklist (available at http://dx.doi.org/10.21037/jgo-20-375).

The clinical and pathological data of patients who had GC and were admitted to our hospital from November 2008 to December 2015 were collected. All were diagnosed through clinical pathology. In all, 84 patients with GC and T2DM (GC + T2DM) were enrolled in the observation group, and 215 patients with normal blood glucose were enrolled in the control group. The diagnostic criteria of T2DM met the T2DM diagnosis and treatment guidelines issued by the American Diabetes Association in 2008. All procedures performed in this study involving human participants were in accordance with the Declaration of Helsinki (as revised in 2013). The study was approved by Scientific Research and New Technology IRB of Wannnan Medical College Yijinshan Hospital. Because of the retrospective nature of the research, the requirement for informed consent was waived.

Patients’ general information, including age, gender, comorbidities, pathological types, tumour stage, tumour markers, treatment modalities, and diabetes-related conditions, and data obtained via telephone surveys, hospitalizations and outpatient visits were collected by reviewing their electronic and paper medical records. The patient’s survival status was followed up. After the treatment, the patients were followed up once every 3–4 months within the first 2 years, every 4–6 months within 3–5 years, and every 6 months to 1 year after 5 years. Follow-up duration was until December 2018. The primary outcome measurement in this study was overall survival (OS), and the OS time was considered to be from the time of diagnosis to the end of a patient’s life or the end of the follow-up period. The secondary outcome measures included 1-, 3-, and 5-year survival.

Statistical analyses were performed using SPSS 20.0 and R version 3.0.1. Differences in categorical variables were compared using a C or Fisher’s test. Differences in continuous variables were compared using a Mann-Whitney U test or a t-test. An OS curve was established with the Kaplan-Meier method. The survival rate was compared via a log-rank test. A Cox proportional hazards regression model was used to analyze single and multiple factors affecting the prognosis of patients. A P value <0.05 indicated a statistically significant difference. The propensity score matching method (PSM) was used to select a 1:1 matched comparison for patients with GC and diabetes mellitus (N=84). The matching factors included age, gender, treatment mode, stage, pathological type, and comorbidity. The PSM was implemented using the MatchIt package (version 4.8.3.4) in R version 3.0.1, and the “nearest” method was used for matching.

Before matching was conducted, a statistically significant difference was observed between the two groups in terms of gender, stage, treatment, and comorbidities (Table 1). After matching was completed, the clinical data and pathological differences between the two groups were not statistically significant (Table 2), and the groups were comparable. This observation could also be observed in the histograms of the scores before and after the matching. Figure 1A,B show the histograms before matching. Significant differences were observed between the two groups. Figure 1C,D illustrate the histograms after matching and present two similar sets of graphs. The value and visual data indicated that the matching was successful and that the two matched sets of patient data could be used for subsequent study analysis (Figure 1). 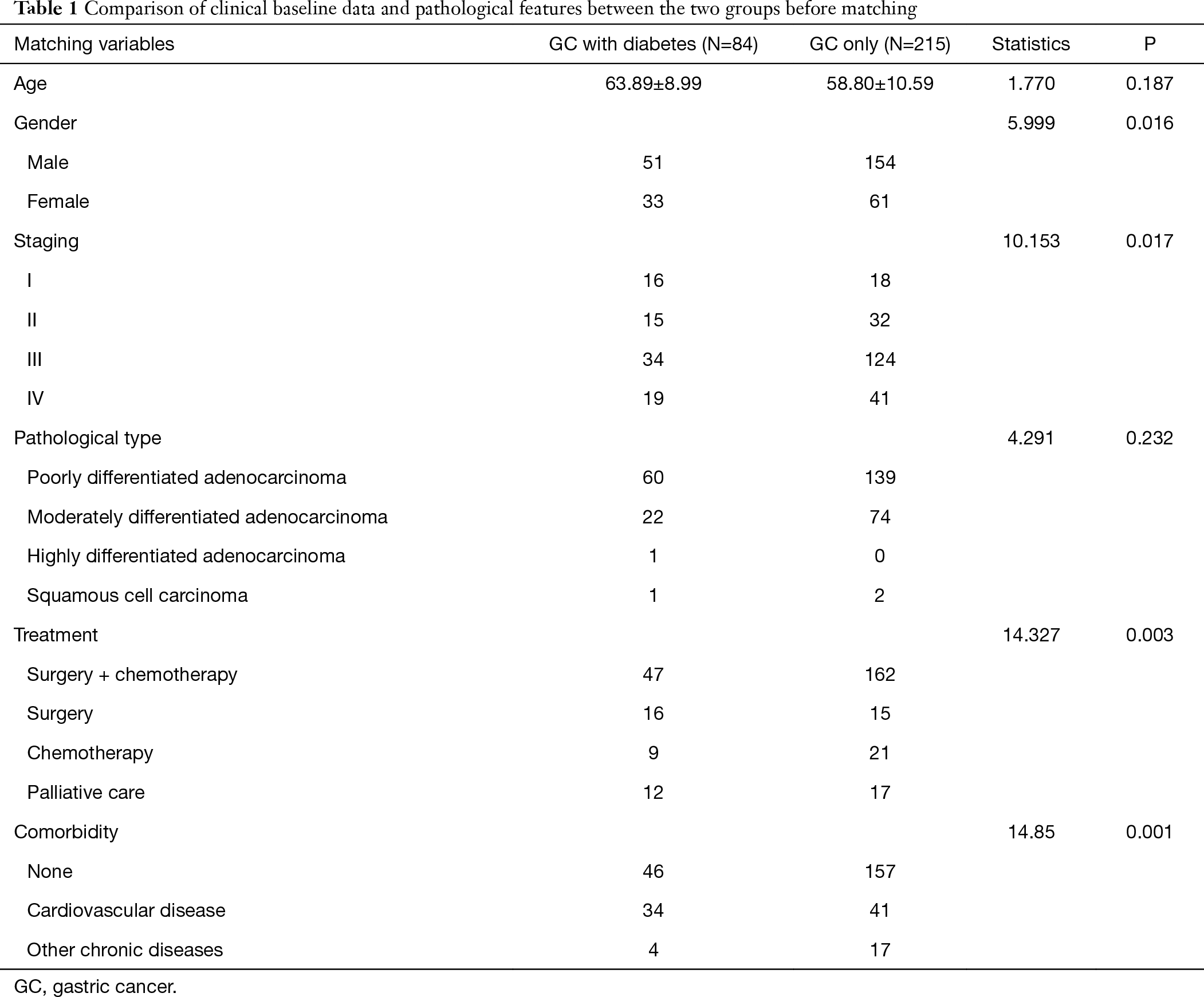 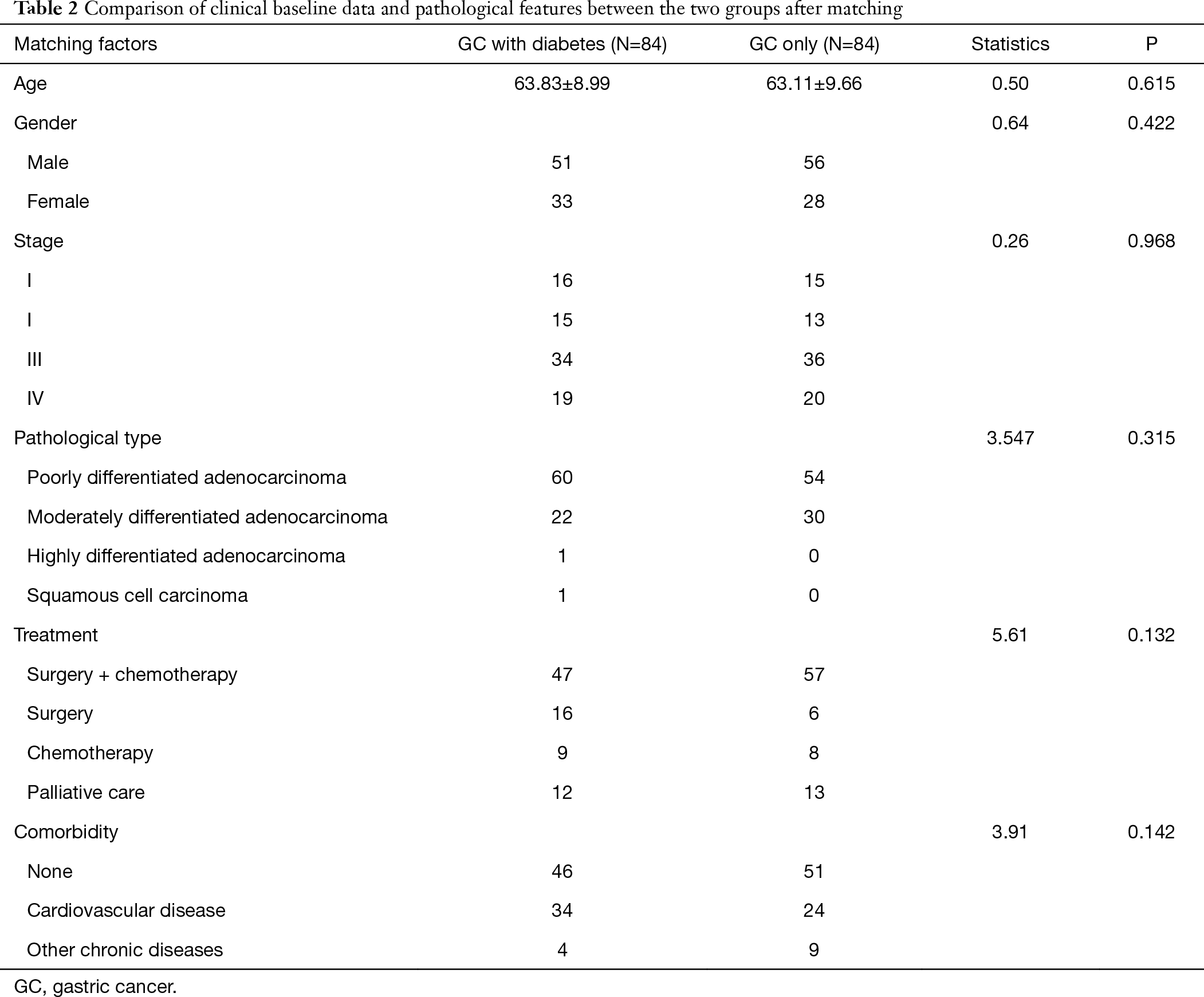 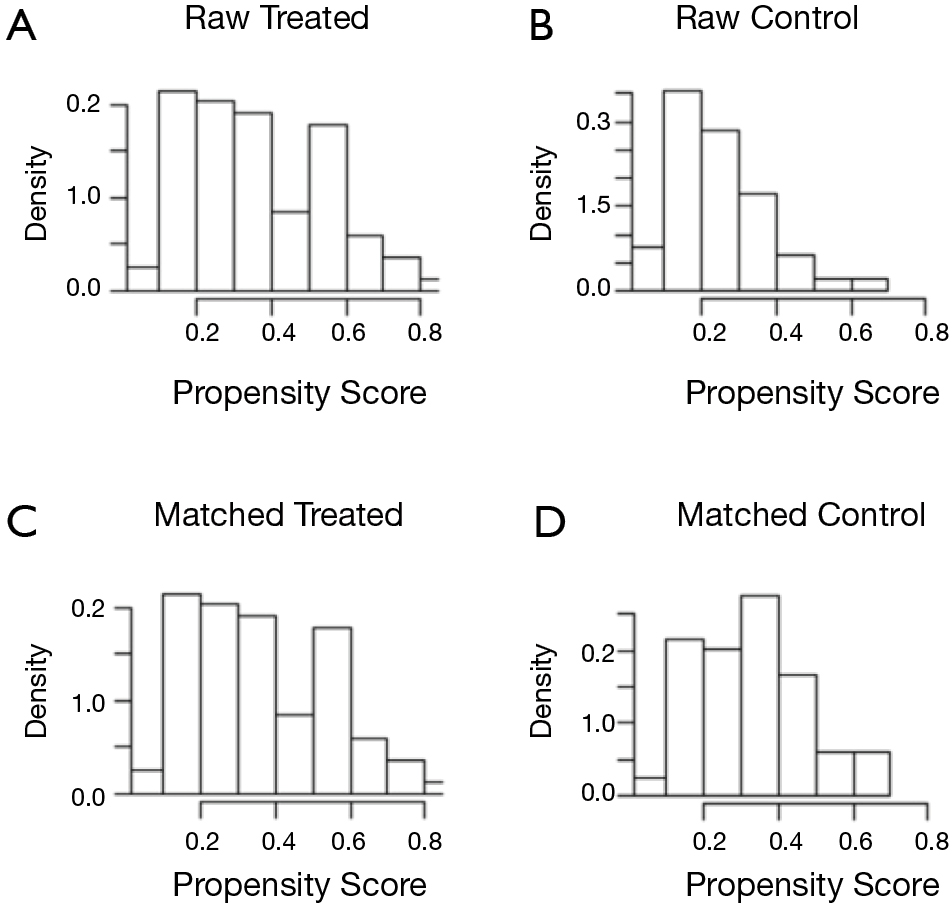 Figure 1 Histograms of propensity scores before and after matching. 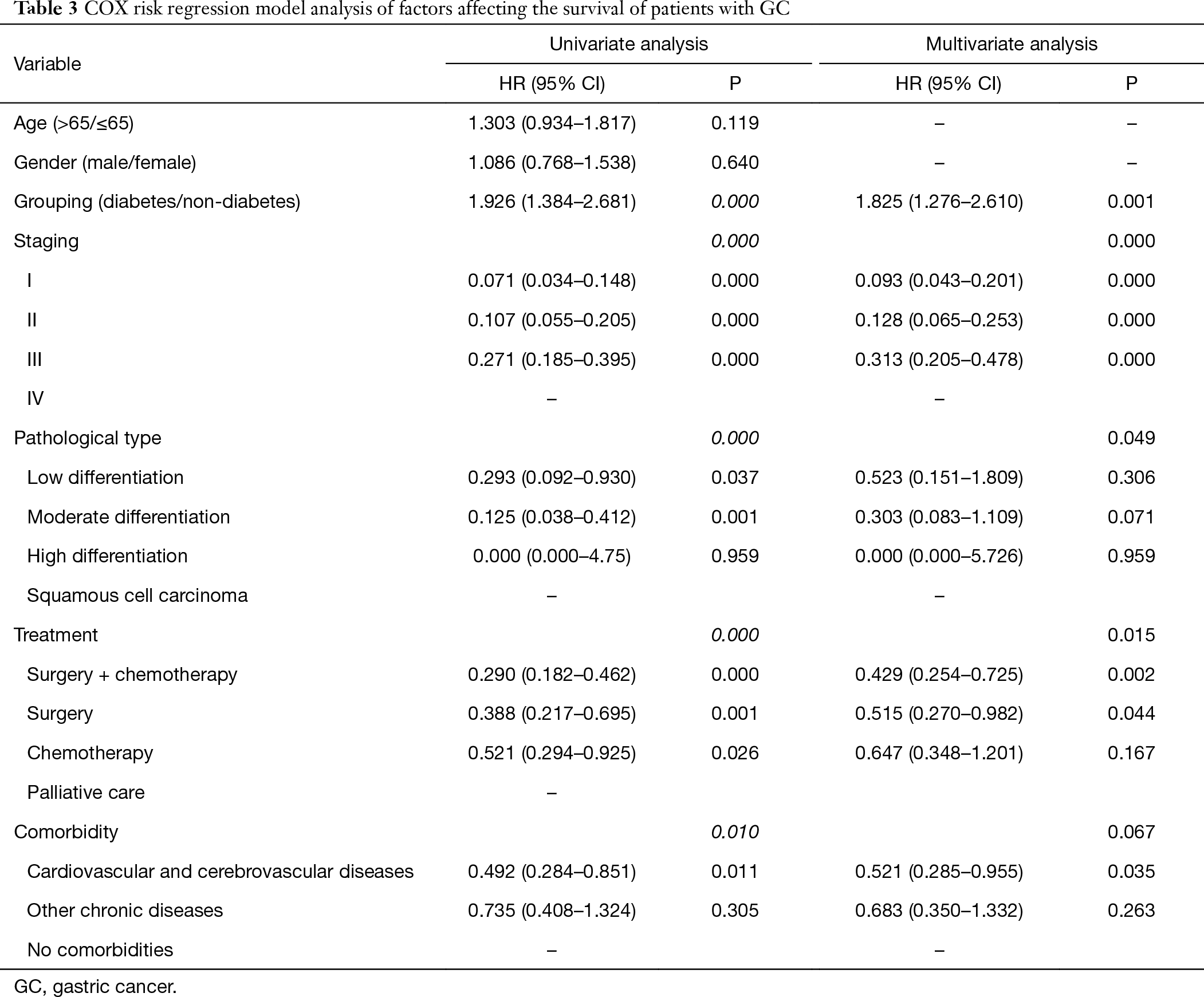 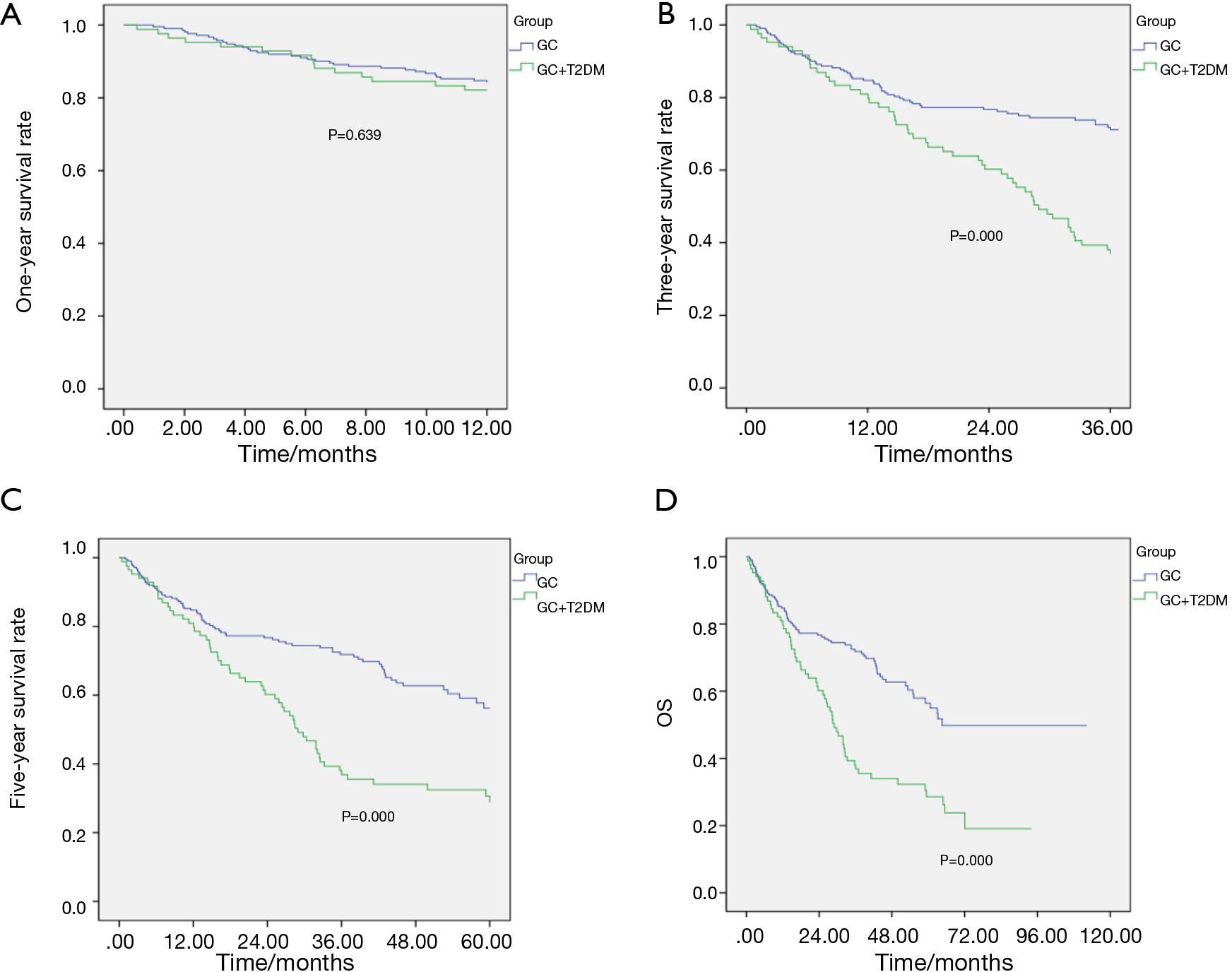 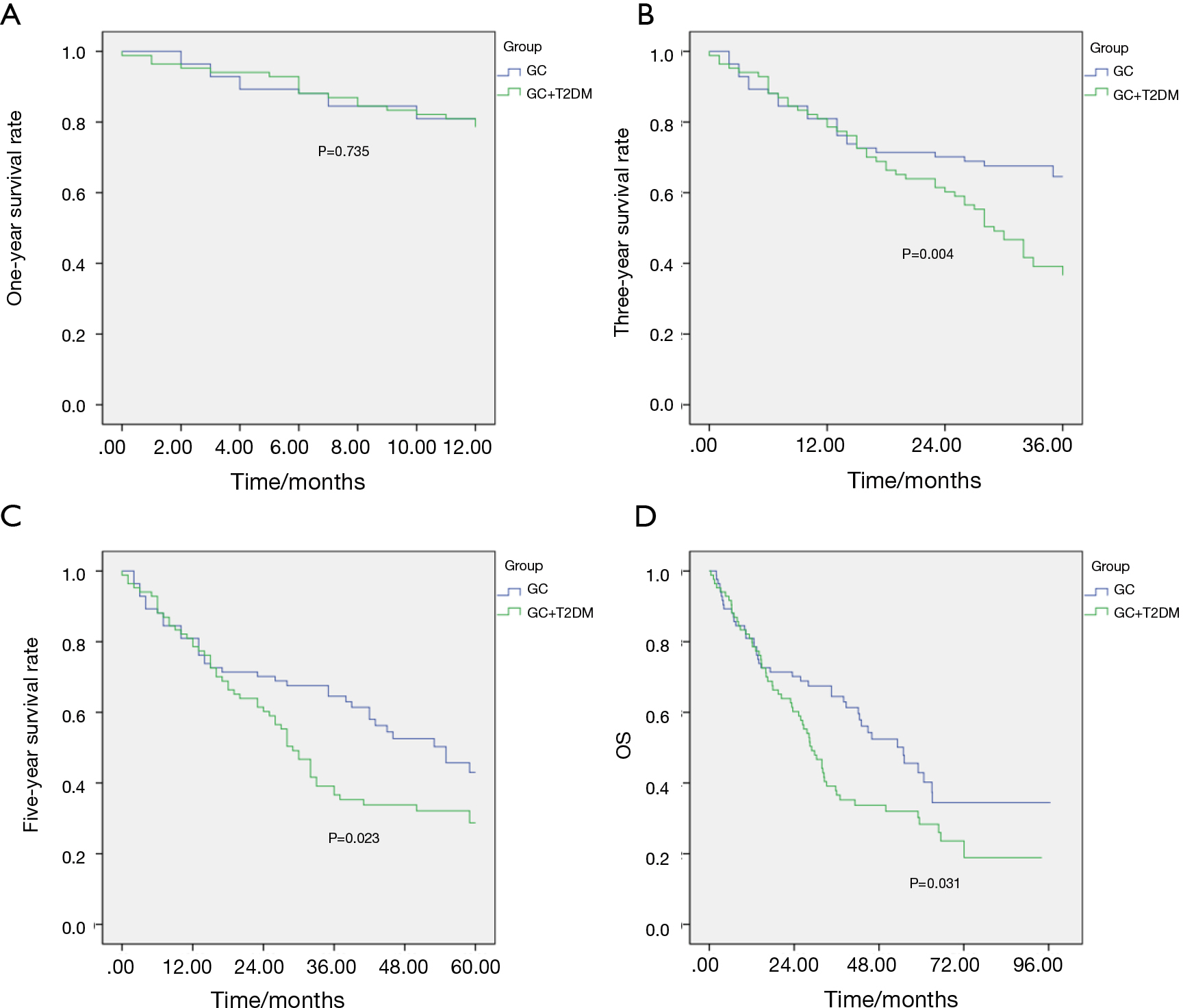 The correlation and interaction mechanisms of diabetes and cancer have been widely explored. A study in China in 2018 showed that T2DM increases the risk of cancer, especially liver cancer, pancreatic cancer and breast cancer, in Chinese people (9). A meta-analysis on 19 Asian cohort studies, including 7 Chinese populations, has shown that T2DM causes a 26% increase in cancer mortality, including in colorectal cancer, liver cancer, cholangiocarcinoma, gallbladder cancer, pancreatic cancer, and breast cancer (10,11). However, the effect of diabetes on the occurrence, development, and prognosis of GC remains unclear, and no definite conclusion has been made. Three meta-analyses (12-14) have also shown that diabetes increases the incidence and mortality of GC, especially in female patients (12,13). However, the results of a meta-analysis in 2017 only revealed slight or no change in the risk of death in patients with diabetes mellitus and GC, and no evidence indicates a difference in the relative risk of GC between males and females (15). Therefore, further research on the development of diabetes in GC should be conducted.

The biological mechanism behind the association between diabetes and cancer is unclear, but several aspects of the possible biological mechanism have been hypothesized. (I) For instance, in hyperinsulinemia, the majority of tumour cells express insulin receptor (INS-R) and IGF-1R on their surface. Insulin reduces liver-producing IGF-binding protein (IGFBP1; IGFBP2) and increases free and active IGF1 in circulating blood. When INS-R and IGF-1R bind to the corresponding ligand, they promote the mitosis and metastasis of tumour cells (16). In patients suffering from diabetes and exhibiting insulin resistance, insulin levels in the body increase, and this condition may promote the development of cancer through this pathway. (II) In hyperglycaemia, many tumour cells rely on glycolysis for energy supply, which is highly dependent on glucose, and uncontrolled hyperglycemia is beneficial to cancer cell proliferation (17). (III) Furthermore, in chronic inflammation, T2DM is a chronic low-grade inflammatory disease. T2DM and related obesity can promote the development of malignant tumours. Adipose tissue is an active endocrine organ that produces free fatty acids, interleukin-6, monocyte chemotactic protein, leptin, and other substances, which promote the proliferation, survival, and invasion of cancer cells and inhibit the hosts’ autoimmune responses (18,19). Most epidemiological studies have inherent limitations, including their research design, sample size, confusion and bias. Therefore, more elaborate studies should be conducted to explore the link between diabetes and GC, and in-depth institutional research should be performed to explain possible connections.

In summary, we were able to confirm that T2DM, which is closely related to the occurrence and development of GC, is one of the factors that can cause the poor prognosis of patients with GC. Clinical treatment should consider whether patients are complicated with T2DM, and timely monitoring should be carried out to avoid disease deterioration.

Reporting Checklist: The authors have completed the STROBE reporting checklist. Available at http://dx.doi.org/10.21037/jgo-20-375

Conflicts of Interest: All authors have completed the ICMJE uniform disclosure form (available at http://dx.doi.org/10.21037/jgo-20-375). The authors have no conflicts of interest to declare.

Ethical Statement: The authors are accountable for all aspects of the work in ensuring that questions related to the accuracy or integrity of any part of the work are appropriately investigated and resolved. All procedures performed in this study involving human participants were in accordance with the Declaration of Helsinki (as revised in 2013). The study was approved by Scientific Research and New Technology IRB of Wannnan Medical College Yijinshan Hospital. Because of the retrospective nature of the research, the requirement for informed consent was waived.