Recent studies have shown that abnormal epigenetic regulation plays an important role in the occurrence and development of gastric cancer (5). Polycomb Repressor Complex 1 (PCR1) is an epigenetic regulatory complex; its main function is to suppress and thereby silence target genes (6). Chromobox (CBX) family proteins are the core members of PCR1; these proteins can regulate the occurrence and development of many types of cancer by promoting the self-renewal of tumor stem cells (7). Eight CBX proteins have been identified in the human genome, with links primarily to heterochromatin, gene expression, apoptosis, and the regulation of development (6).

Members of the CBX family are known to be abnormally overexpressed in tumorigenesis and affect tumor prognosis. For example, overexpression of CBX8 in hepatocellular carcinoma patients is related to short overall survival time (OS) (8). In addition, CBX7 can be activated by the AKT pathway and downregulated by the tumor suppressor protein p16 in gastric cancer, which plays an important role in maintaining the stem cell-like characteristics of gastric cancer cells (9). However, the roles of different CBX family members in the occurrence and development of gastric cancer remain unclear. Therefore, in the present study, we used a range of tools and databases to investigate the relationship between CBX family members and gastric cancer. Specifically, we used Oncomine, Kaplan-Meier plotter, cBioPortal, Metascape, and GEPIA (Gene Expression Profiling Interactive Analysis) to analyze the expression, mutation, and clinical relationships of CBX proteins in gastric cancer patients and to predict their potential functions and prognostic values.

We present the following article in accordance with the REMARK reporting checklist (available at http://dx.doi.org/10.21037/jgo-20-223). 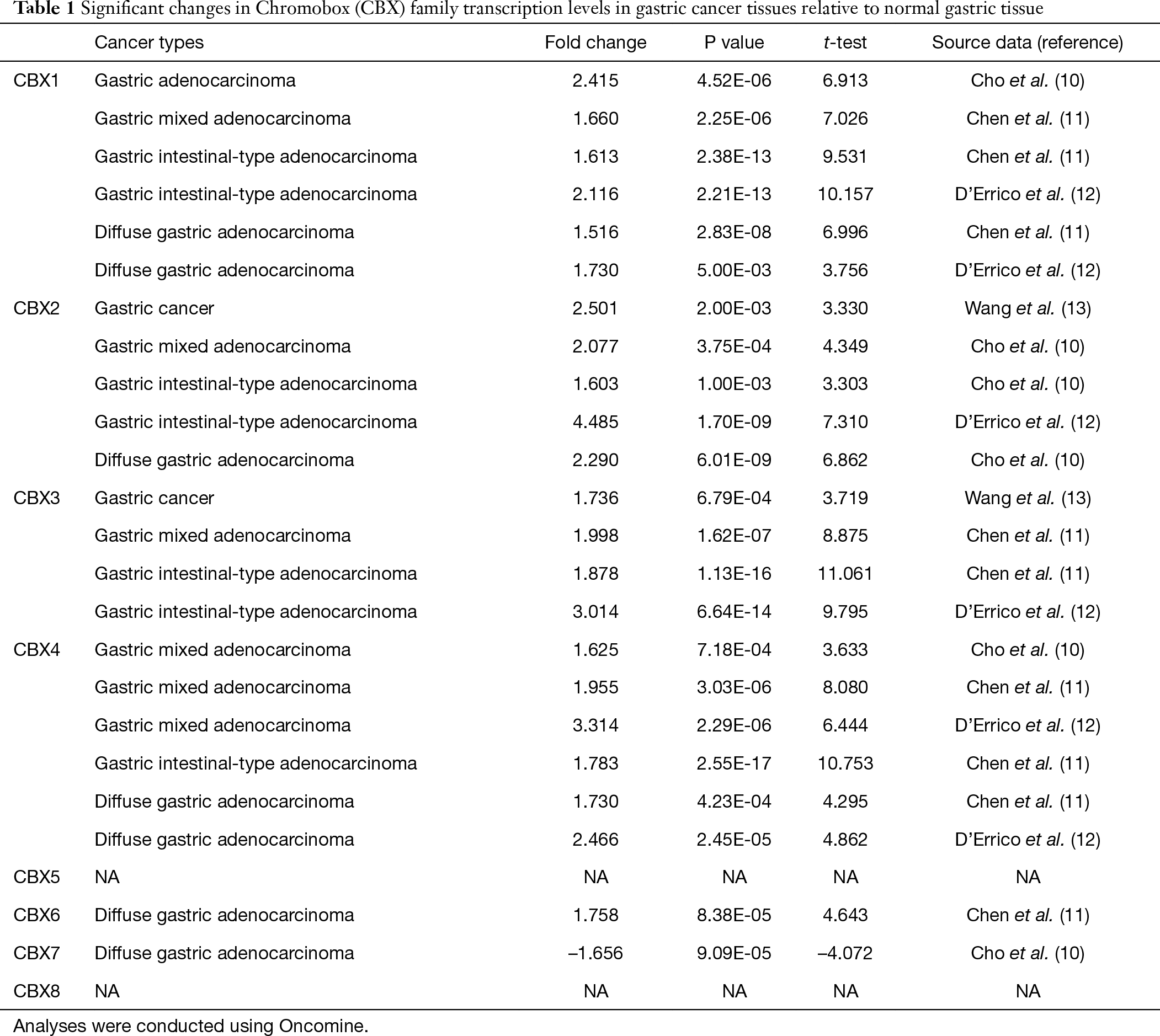 GEPIA (http://gepia.cancer-pku.cn/) is an interactive web server for analyzing the RNA sequencing expression data of 9,736 tumors and 8,587 normal samples, obtained from The Cancer Genome Atlas (TCGA) and the Genotype-Tissue Expression projects, using a standard processing pipeline (15). We used GEPIA to analyze the relationship between the expression of CBX mRNAs and the clinicopathological stage of cancer. We also identified genes that were similar to the CBX family members.

The Kaplan-Meier plotter (http://kmplot.com/analysis/) can be used to assess the effects of 54,000 genes on survival in 21 cancer types; primarily, the tool is used for meta-analysis-based discovery and validation of survival biomarkers (16). The incorporated datasets include gastric cancer data (n=1,440). We used the Kaplan-Meier plotter to analyze the relationship between mRNA expression of CBX family members and OS, including survival associated with various cancer treatments. Differences were considered to be statistically significant when P<0.05.

Metascape (http://metascape.org) is a tool for gene annotation and gene list enrichment analysis (18). We used Metascape to enrich CBX genes and similar genes via the “CustomAnalysis” module.

UALCAN (http://ualcan.path.uab.edu/analysis.html), a comprehensive web resource, provides analyses based on The Cancer Genome Atlas (TCGA) and MET500 cohort data (19). In this study, UALCAN was used to analyze Relationships between mRNA expression levels of 8 Chromobox (CBX) family members and the grades of gastric cancer.

Transcriptional expressions of 8 different CBXs members between different cancer tissues and their corresponding adjacent normal control samples were got from ONCOMINE database. The expression of CBX mRNAs in clinical tumors and normal control tissues was compared by Student’s t-test. Sufficient fold change and significant p values were defined as 1.5 and 0.01. UALCAN and GEPIA were used to analyze the mRNA expressions of 8 CBXs family members in gastric cancer and their association with clinicopathologic parameters. Difference of mRNA expression was compared by students’ t test and P<0.05 was considered as statistically significant. Survival curves were generated by Kaplan-Meier plots. Differences were considered to be statistically significant when P<0.05.

Expression of CBX family members in patients with gastric cancer 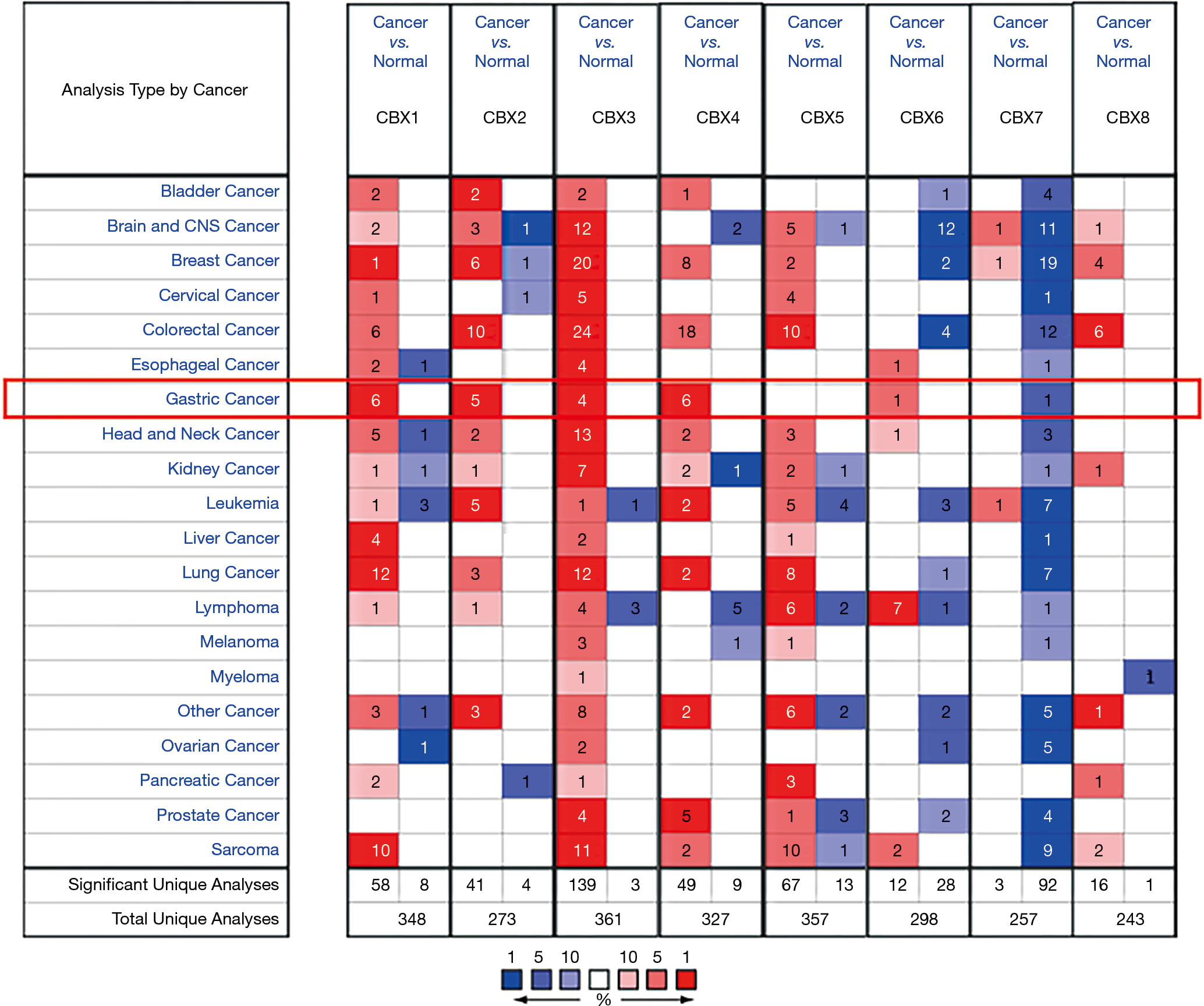 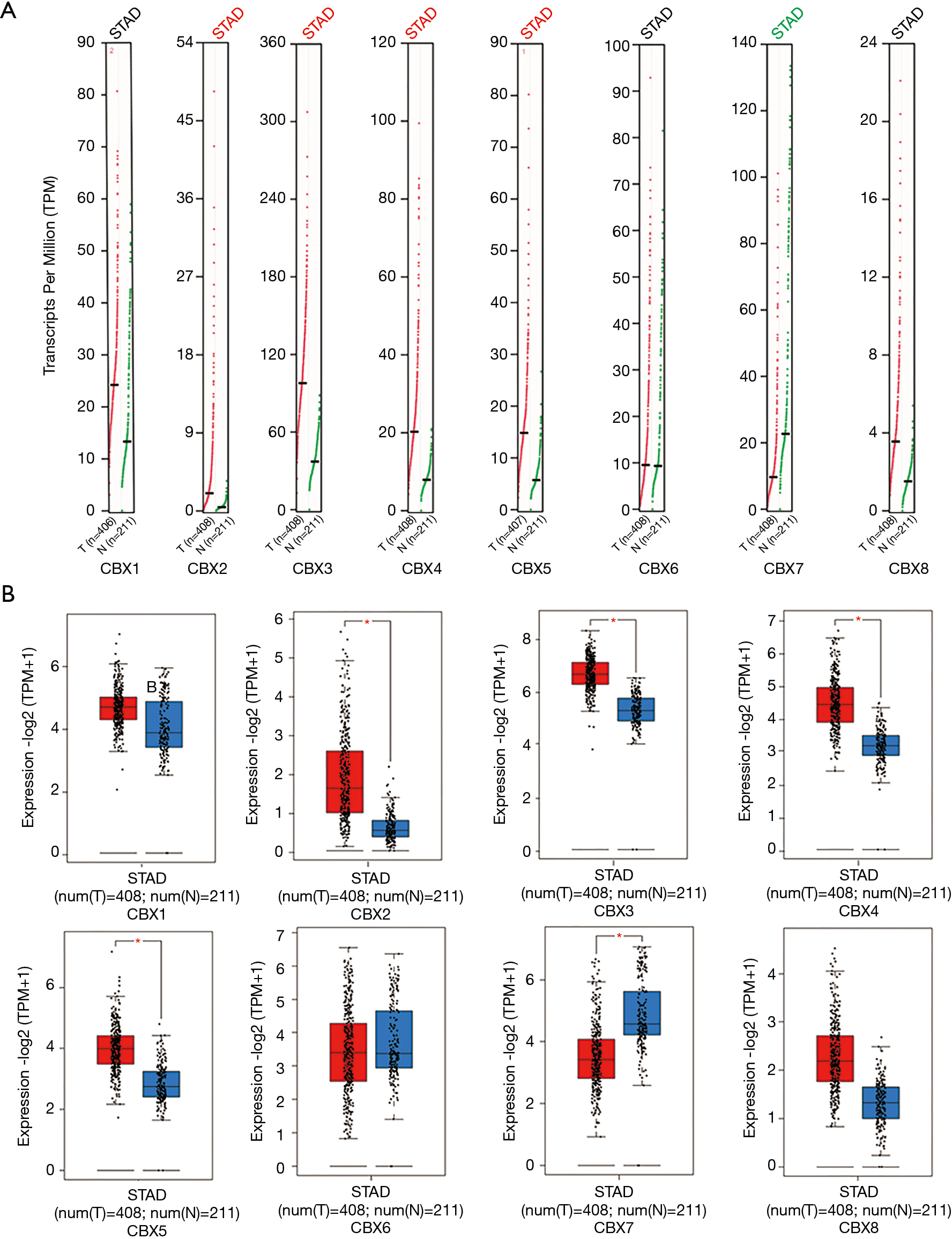 In summary, CBX1-6 are apparently overexpressed in gastric cancer, whereas CBX7 is underexpressed. 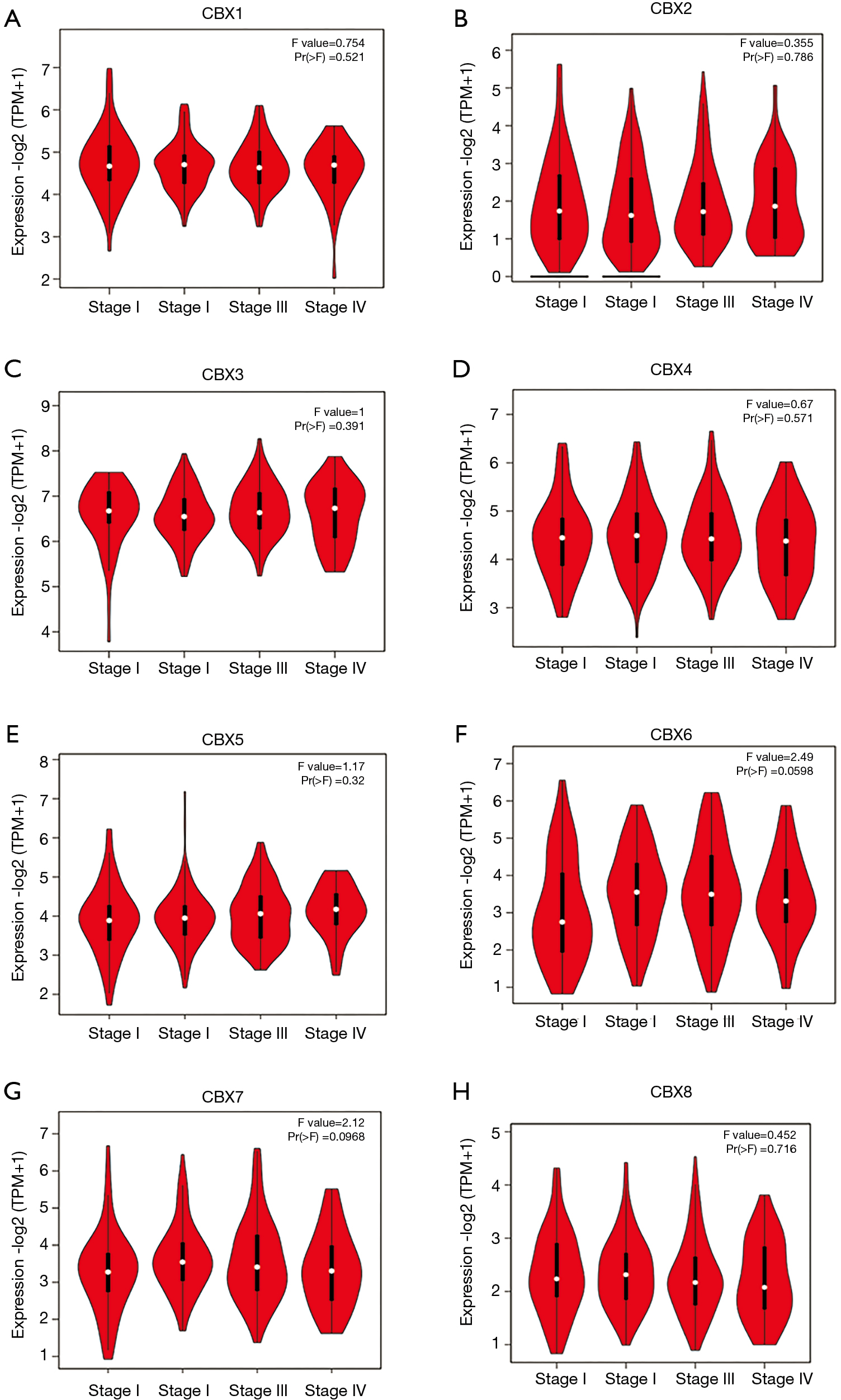 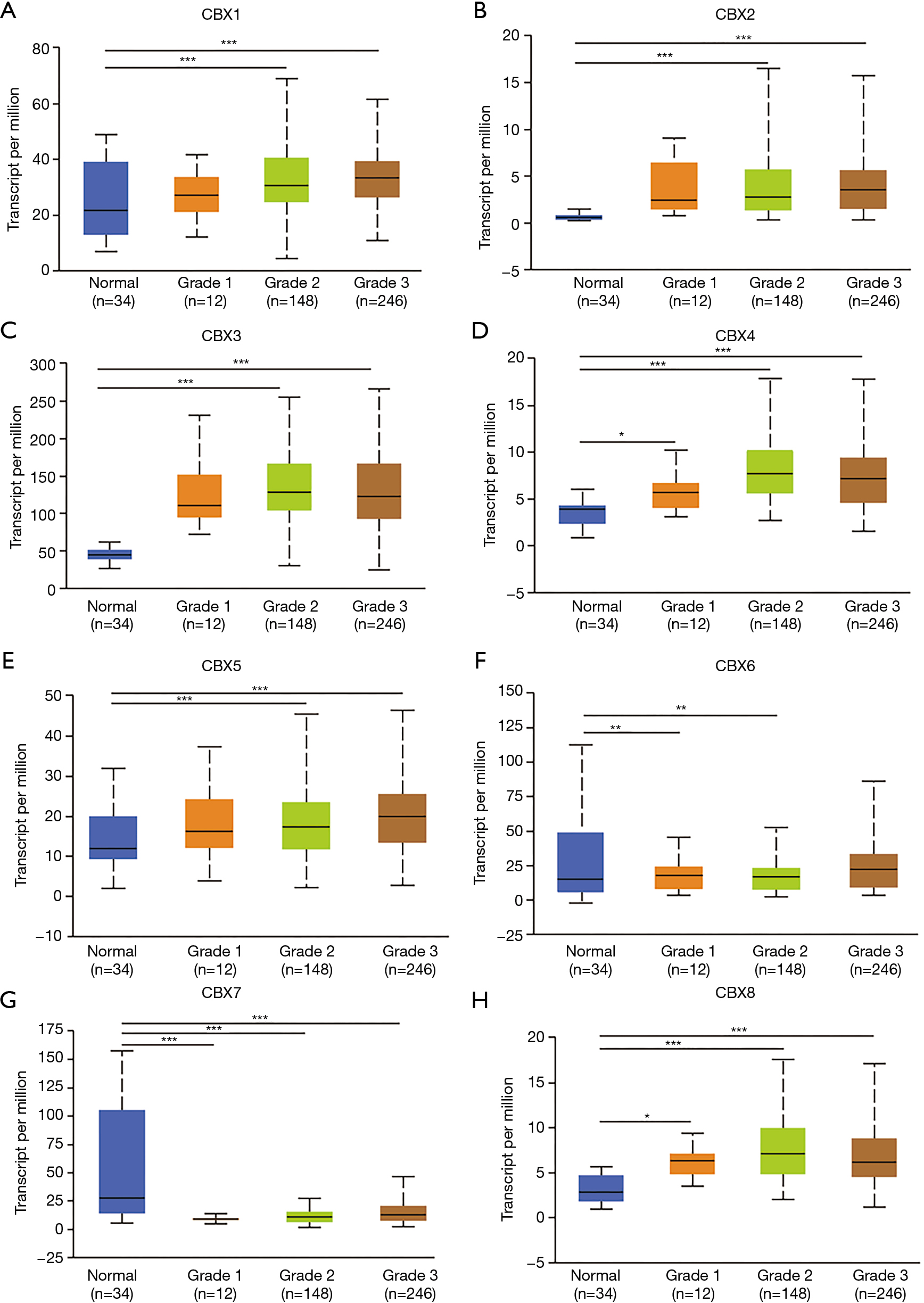 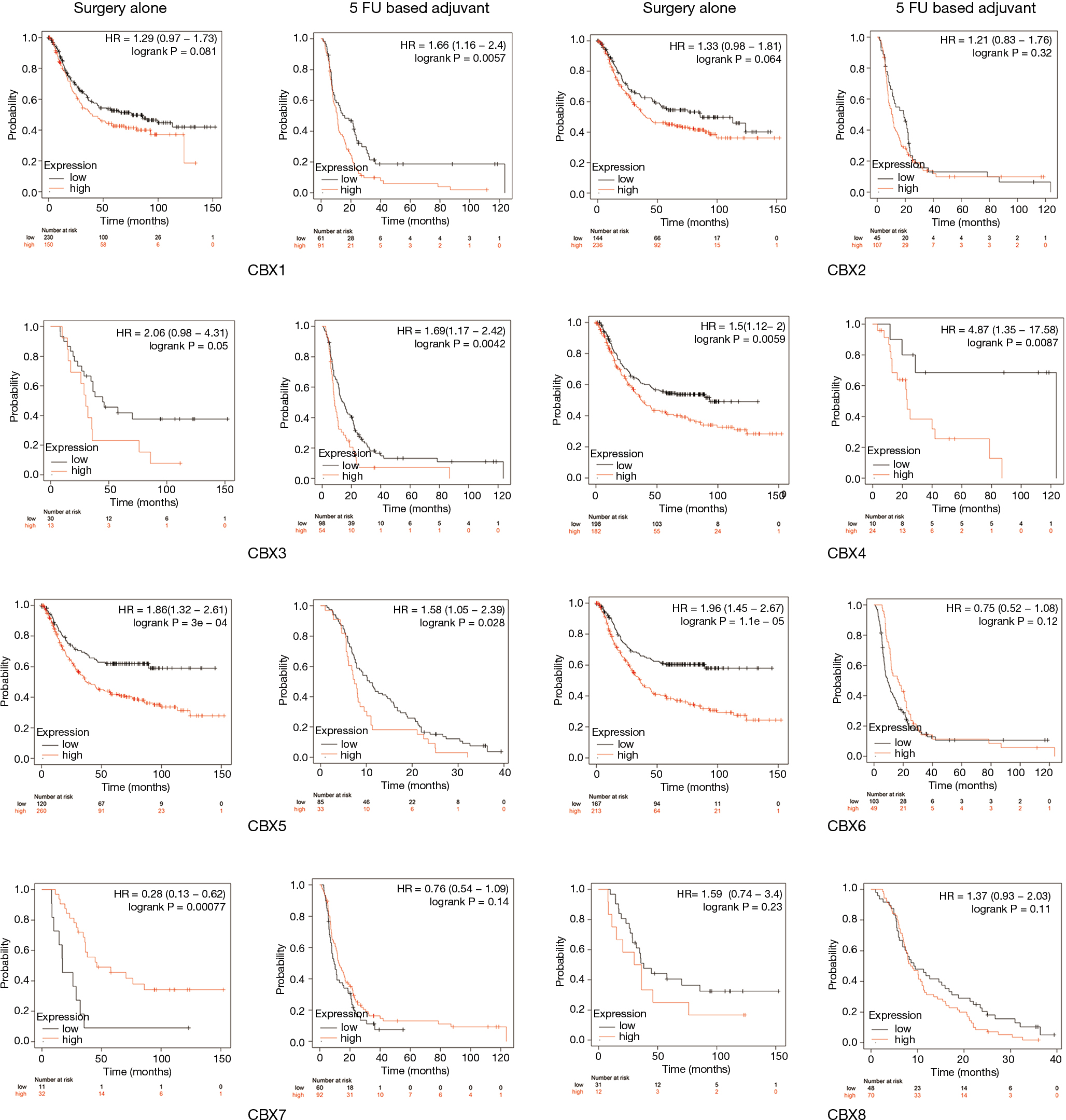 Figure 6 Relationships between the mRNA expression levels of eight Chromobox (CBX) family members and the prognosis of patients given differing treatments. Treatments were surgery (alone, i.e., with no other treatment) or 5-fluorouracil (5 FU)-based adjuvant chemotherapy. Analyses were conducted using the Kaplan-Meier plotter. 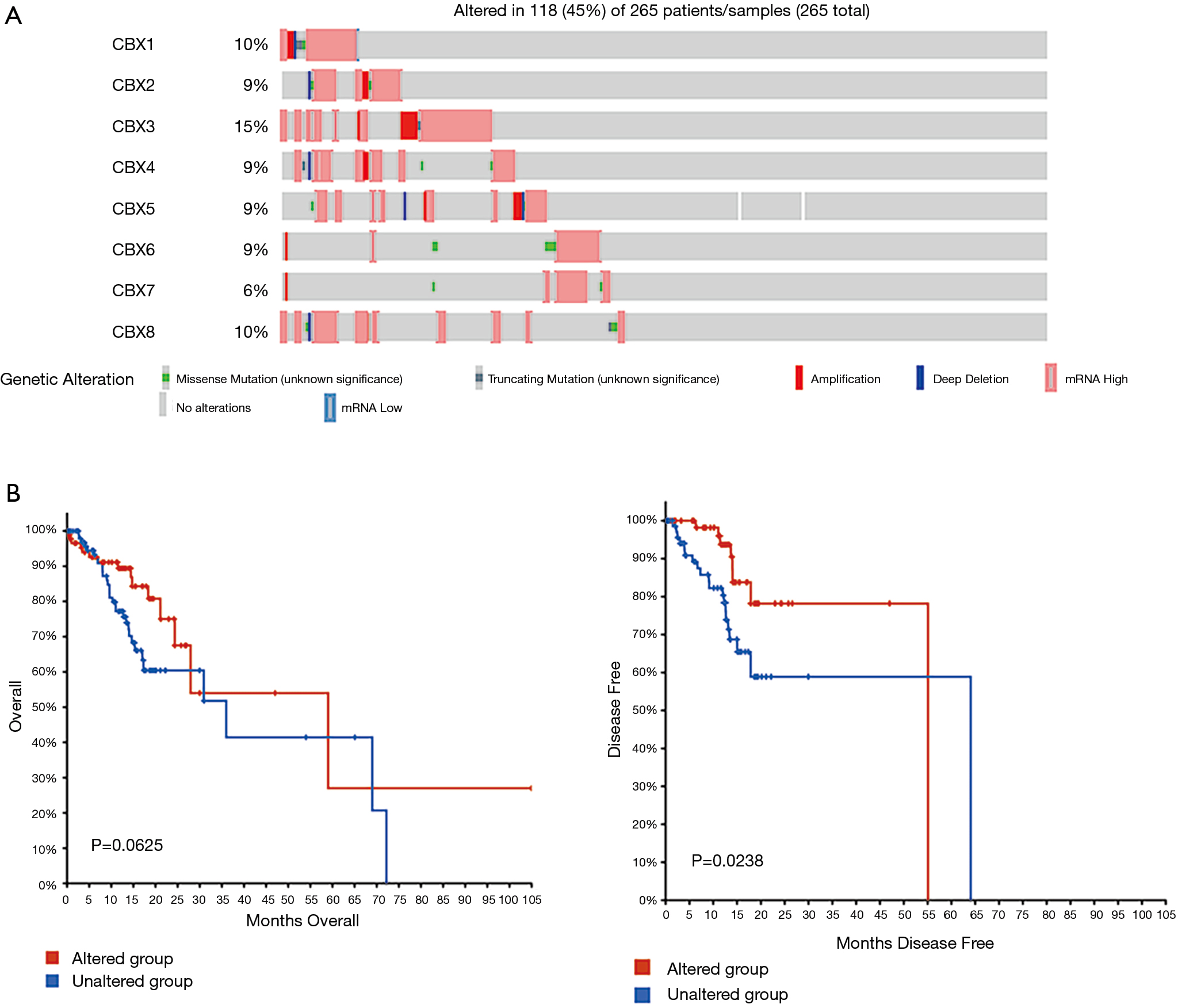 First, we used GEPIA to find CBX-like genes in gastric cancer tissues; we used the first 100 similar genes for each CBX gene. Next, we used Metascape for Gene Ontology (GO), Kyoto Encyclopedia of Genes and Genome (KEGG), and protein-protein interaction (PPI) enrichment analyses. The predicted functions and pathways of CBX genes and similar genes are shown in Figure 8A,B,C. These genes were involved in the range of biological processes (13 GO terms), cellular components (5 terms), and molecular functions (3 terms). Most prominently the genes were enriched with the following GO terms: mitotic nuclear division, spindle, regulation of cell cycle process, chromatin binding, DNA repair, and regulation of chromosome segregation. The genes were related to 12 KEGG pathways, including cell cycle, DNA replication, and transcriptional misregulation in cancer (which is specifically related to the development of cancer). Figure 8D shows the PPI network related to the genes; it was mainly associated with mitotic nuclear division, the Wnt signaling pathway, chromatin silencing, cell division, negative regulation of gene expression, and epigenetics. 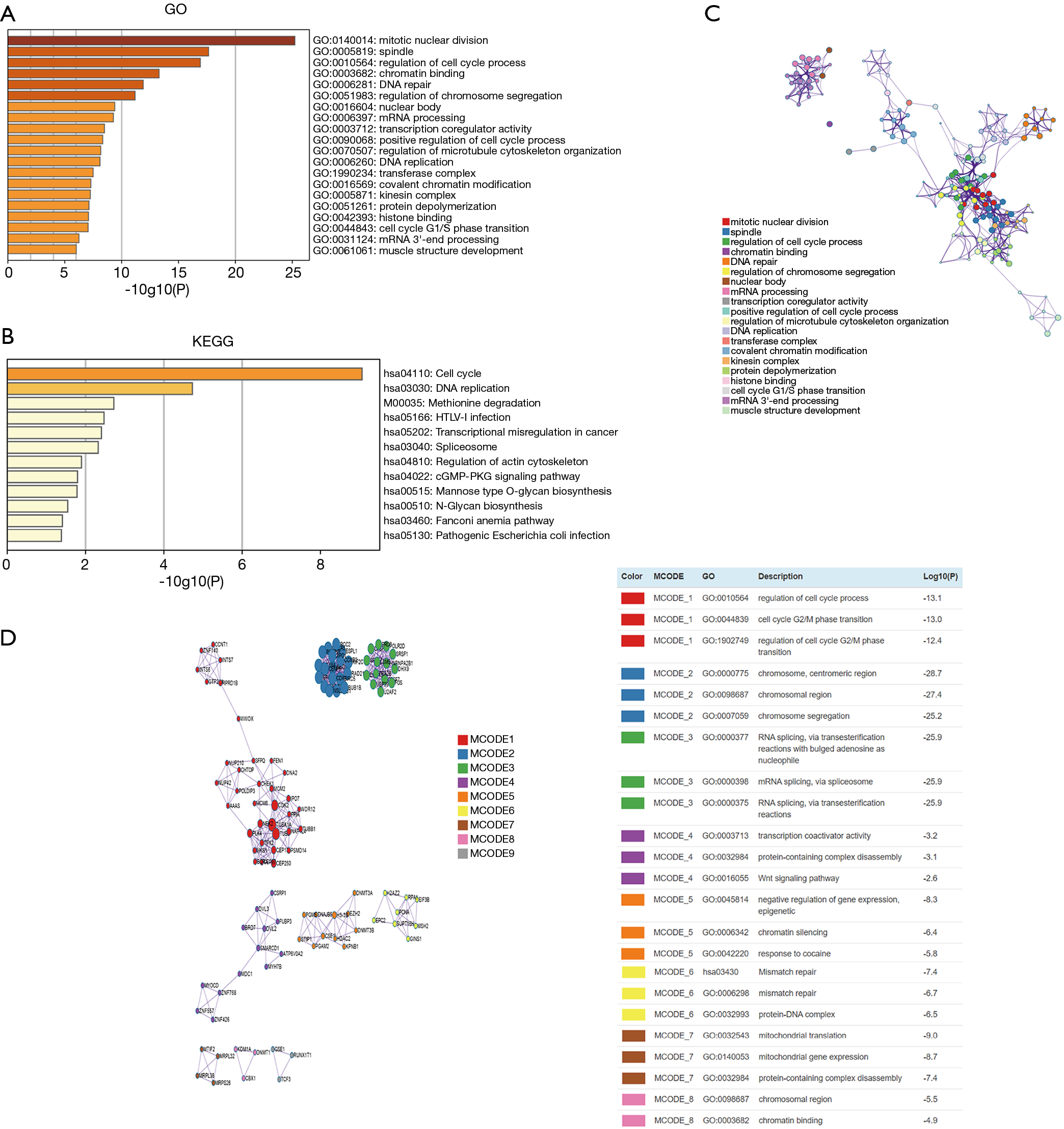 Previously, we found that CBX1 showed carcinogenic activity in hepatocellular carcinoma and predicted poor prognosis (20). In addition, overexpression of CBX1 in prostate cancer and breast cancer are significantly correlated with shorter OS (21,22). The present study showed that the mRNA and protein levels of CBX1 in gastric cancer tissues were significantly higher than those in normal tissues, which is consistent with the results of previous studies. Furthermore, although there was no significant relationship between CBX1 mRNA expression and prognostic OS in gastric cancer patients treated with surgery alone, there was a significant correlation between the overexpression of CBX1 mRNA and shorter prognostic OS in gastric cancer patients treated with 5-fluorouracil-based adjuvant chemotherapy. The expression of heterochromatin protein 1 (HP1) has been shown to enhance the stability of heterochromatin structure and reduce the cytotoxicity of chemotherapeutic drugs (23). Interestingly, CBX1 is one of the core proteins in HP1 (24). Therefore, we speculate that the overexpression of CBX1 leads to the expression of HP1, which reduces the cytotoxicity of chemotherapeutic drugs and thereby reduces the prognosis OS. Moreover, CBX1 may be a novel biomarker for choosing appropriate chemotherapy regimens for gastric cancer patients.

CBX2 is overexpressed in breast cancer and can promote the progression of this disease through the PI3K/AKT signal pathway (25). Furthermore, CBX2 can regulate the proliferation and apoptosis of hepatocellular carcinoma cells in patients by phosphorylating YAP (26). In patients with gastric cancer, overexpression of CBX2 in tumor tissues has previously been related to tumor metastasis but shown to have no significant relationship with OS (27). In the present study, consistent with this previous study, CBX2 mRNA and protein levels were significantly increased in gastric cancer tissues, but these levels were not significantly associated with the prognostic OS of patients.

CBX3 has been found to regulate glycolysis and promote proliferation by inhibiting fructose-1,6-bisphosphatase 1 in pancreatic cancer (28). In glioma patients, CBX3 is overexpressed in tumor tissue, which can stimulate the growth of glioma U87 cells by targeting CDKN1A; CBX3 overexpression also predicts the poor prognosis of glioma patients (29). Moreover, in patients with liver and breast cancers, CBX3 overexpression promotes the proliferation of tumor cells and predicts poor prognoses (21,30). In our results, CBX3 mRNA and protein levels were also significantly increased in gastric cancer tissues, and CBX3 mRNA overexpression was significantly correlated with a short OS prognosis in patients. Thus, CBX3 may be a biomarker of prognosis and survival in gastric cancer patients.

In renal clear cell carcinoma, CBX4 plays a carcinogenic role by inhibiting tumor suppressor KLF6 via an interaction with histone deacetylase (31). CBX4 also promotes the proliferation and metastasis of lung cancer cells by regulating the expression of BMI-1, and it is a prognostic indicator in lung cancer (32). Furthermore, CBX4 promotes the development of breast cancer through the mir137-mediated Notch1 signaling pathway and can be used as a biomarker of prognosis in the disease (33). Additionally, CBX4 is overexpressed in hepatocellular carcinoma and significantly related to the growth and prognosis of tumor cells (34). In the present study, CBX4 mRNA and protein levels increased significantly in gastric cancer tissues, and the overexpression of CBX4 mRNA was significantly correlated with a short OS prognosis in patients. Similar to CBX3, CBX4 may be a biomarker of prognosis and survival in gastric cancer patients.

Many studies have shown that CBX7 may be a tumor suppressor. For example, in ovarian cancer, CBX7 combines with E-box to inhibit TWIST1 function, and thereby inhibits tumor growth and metastatic potential (40). The expression of CBX7 in lung cancer tissue has been shown to be lower than that in normal tissue, and the tumor inhibits the activity of CBX7 (41). In addition, CBX7 expression in gastric cancer, colorectal cancer, and hepatocellular carcinoma is known to lower than that in normal tissues (42). In pancreatic cancer, CBX7 is downregulated in tumor tissue and is an important tumor suppressor, which negatively regulates PTEN/AKT signal transduction during pancreatic tumorigenesis (43). Finally, CBX7 inhibits the occurrence of breast adenocarcinoma by increasing the expression of the Wnt antagonist DKK-1 and thereby inhibiting the Wnt/β-catenin pathway (44). We also found that the expression of CBX7 in tumor tissues was lower than that in normal tissues, and underexpression of CBX7 mRNA was significantly correlated with short OS prognosis. Therefore, as well as being an important tumor suppressor factor in gastric cancer, CBX7 may be a biomarker of patient prognosis and survival in this disease.

CBX8 plays a contradictory role in esophageal squamous cell carcinoma: it inhibits metastasis by inhibiting Snail while also promoting cell proliferation (45). In bladder cancer, CBX8 overexpression promotes the proliferation of bladder transitional cell carcinoma cells by inhibiting the p53 pathway, which plays an important role in the invasiveness of bladder transitional cell cancer cells (46). However, in our study, we did not find a significant difference between CBX8 mRNA and protein levels in gastric cancer and normal tissues.

B11r results, overexpression of CBX3-6 mRNA and underexpression of CBX7 mRNA in gastric cancer could be used as biomarkers of patient prognosis and survival; however, we note the following limitations in our study. First, our data were all taken from databases; thus, further research will be required to verify our results in vivo and in vitro. In addition, we discussed the prognostic value of CBX family members only; our study lacked research on the related mechanisms. Finally, due to the limitations of our data, we did not conduct grouping analysis.

In conclusion, we found that the overexpression and underexpression of CBX3-6 mRNA and CBX7 mRNA, respectively, are significantly related to the poor prognosis and survival of gastric cancer patients. These members of the CBX family can therefore be used as prognosis and survival biomarkers for this disease. Furthermore, the overexpression of CBX1 mRNA is significantly related to the poor prognosis of gastric cancer patients treated with adjuvant 5-fluorouracil-based chemotherapy; thus, CBX1 could be a biomarker for choosing chemo3-1therapy treatments in these patients (47).

Funding: This work was supported by the Science and Technology Planning Project of Guangdong Province (grant number.2017A020215036).

Reporting Checklist: The authors present the study in accordance with the REMARK reporting checklist. Available at http://dx.doi.org/10.21037/jgo-20-223

Conflicts of Interest: All authors have completed the ICMJE uniform disclosure form (available at http://dx.doi.org/10.21037/jgo-20-223). The authors have no conflicts of interest to declare.