Colorectal cancer is one of the most common cancers in the world based on GLOBOCAN 2018 estimates. Approximately 1.8 million new cases of colorectal cancer are diagnosed yearly (1). The increasing incidence of rectal cancer cases have raised huge concerns within the scientific and health experts. Based on the guidelines of the American Joint Committee on Cancer (AJCC) and the National Comprehensive Cancer Network (NCCN), patients diagnosed with locally advanced rectal cancer (T3/4 or N1/2) should receive neoadjuvant chemoradiotherapy (NCRT) follow by total mesorectal excision (TME) thereafter (2,3). These guidelines suggest that a minimum of 12 lymph nodes (LNs) should be examined for rectal cancer patients regardless of neoadjuvant therapy (4,5). However, several studies report that neoadjuvant chemoradiotherapy decrease the number of LNs retrieved in subsequent surgery resections (6-8). This further disputes the optimal number of examined LNs in rectal cancer patients after neoadjuvant therapy (9,10).

In clinical practice, some rectal cancer patients receive preoperative therapy followed by TME are confirmed to have stage IV rectal cancer after postoperative pathological diagnosis. For these patients, the standard number of examined LNs suitable for them remains unclear. As such, this study aimed to explore the impact of the number of resected LNs on the survival of stage IV rectal cancer patients who initially received preoperative therapy. Rectal cancer datasets from the Surveillance, Epidemiology, and End Results (SEER) database were used. We present the following article in accordance with the STROBE reporting checklist (available at http://dx.doi.org/10.21037/jgo-20-175).

Clinical data of patients diagnosed with stage IV rectal cancer after preoperative radiotherapy between 1st January, 2010 and 31st December, 2015 was retrospectively examined. Patients whose TNM stage information was incomplete as well as those whose radiation method was not beam radiation or unknown were excluded from the study. Patients whose data of examined LNs was unclear or incomplete and those with a second cancer or borderline tumor were also excluded. This was also the case for patients less than 18 years old, patients without chemotherapy, non-adenocarcinoma patients, patients with tumor deposit and patients who died within 30 days after surgery. In addition, patients with no surgical procedure of primary site and or the information of surgery was incomplete as well as those died not due to the cancer were also excluded from the study. Finally, 556 patients were enrolled in the study (Figure 1). 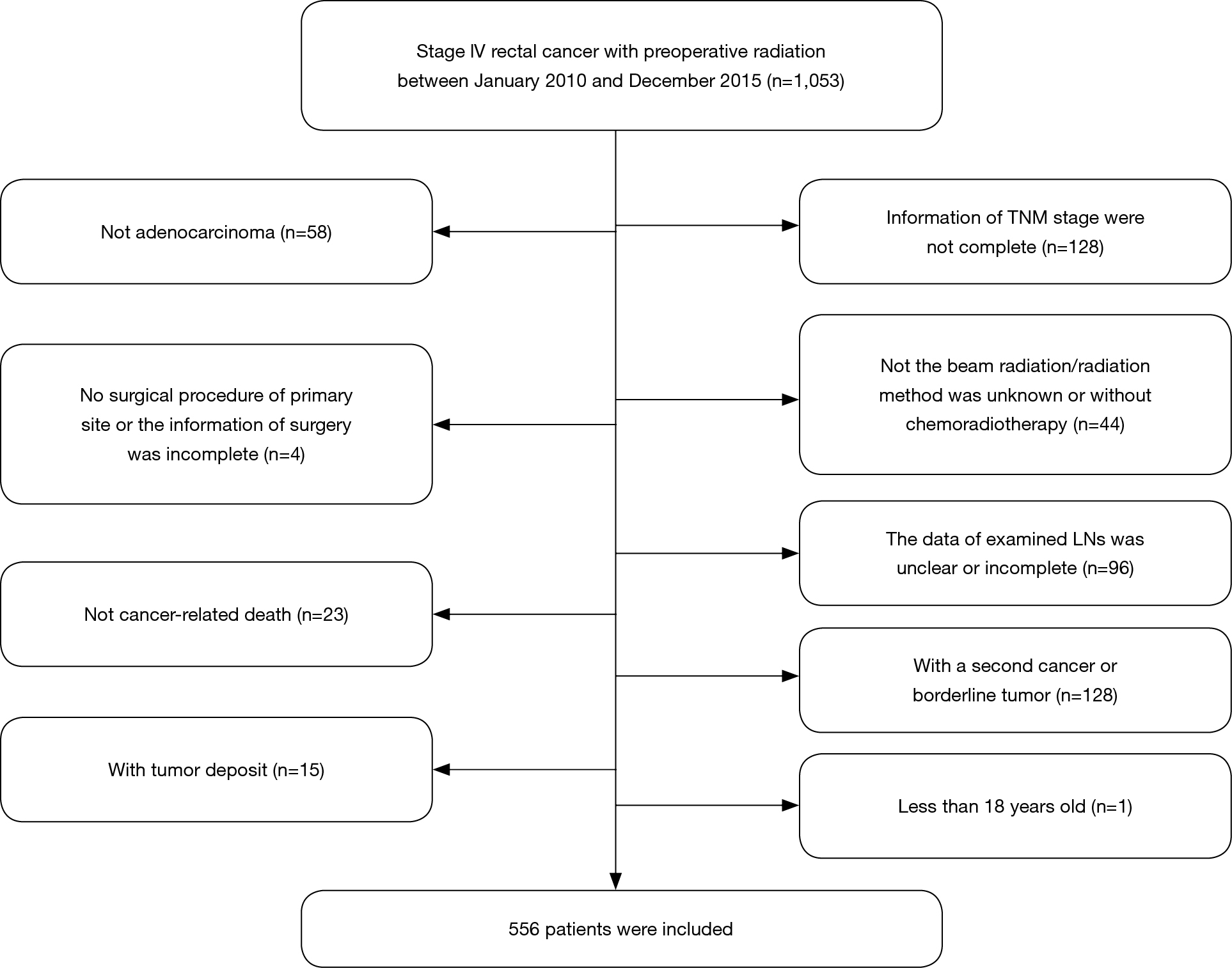 The optimal cutoff points of the number of resected LNs were defined using the X-tile software version 3.6.1 (Copyright Yale University 2003). The chi-square test was used to calculate differences in distribution for categorical variables. Moreover, the Kaplan-Meier method was employed to determine the prognostic factors of cancer-specific survival (CSS) using the log-rank test. In the same line, cox univariate and multivariate analyses were used to identify the most significant prognostic factors of CSS. All the statistical analyses were carried out using SPSS software, v25.0 (SPSS Inc., Chicago, IL, USA). A P value less than 0.05 indicated that there were significant differences between groups.

The study was conducted in accordance with the Declaration of Helsinki (as revised in 2013). The data in the SEER database were publicly available and de-identified thereby no ethics approval was required.

Figure 2 X-tile analysis to determine the cutoff values of the number of resected LNs. 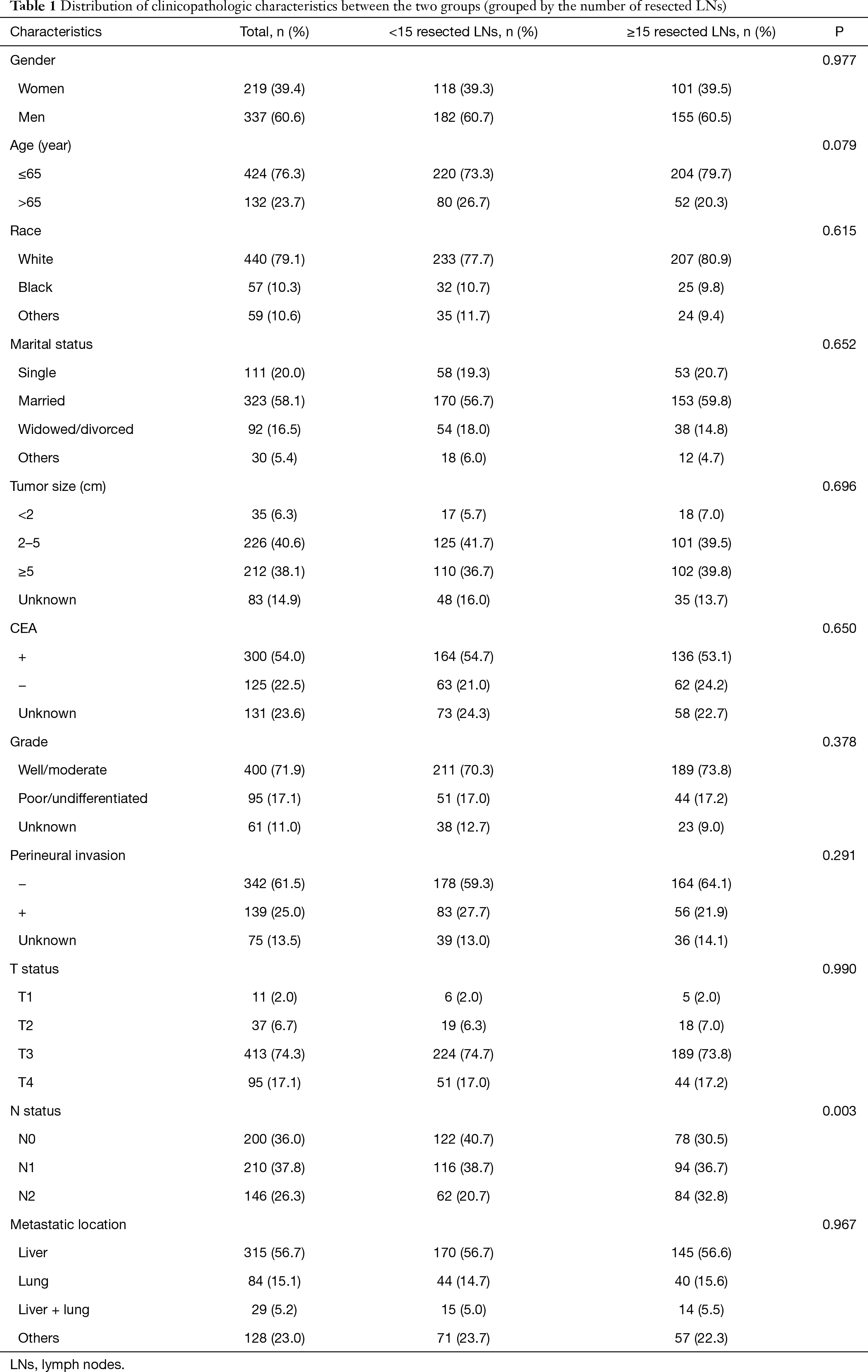 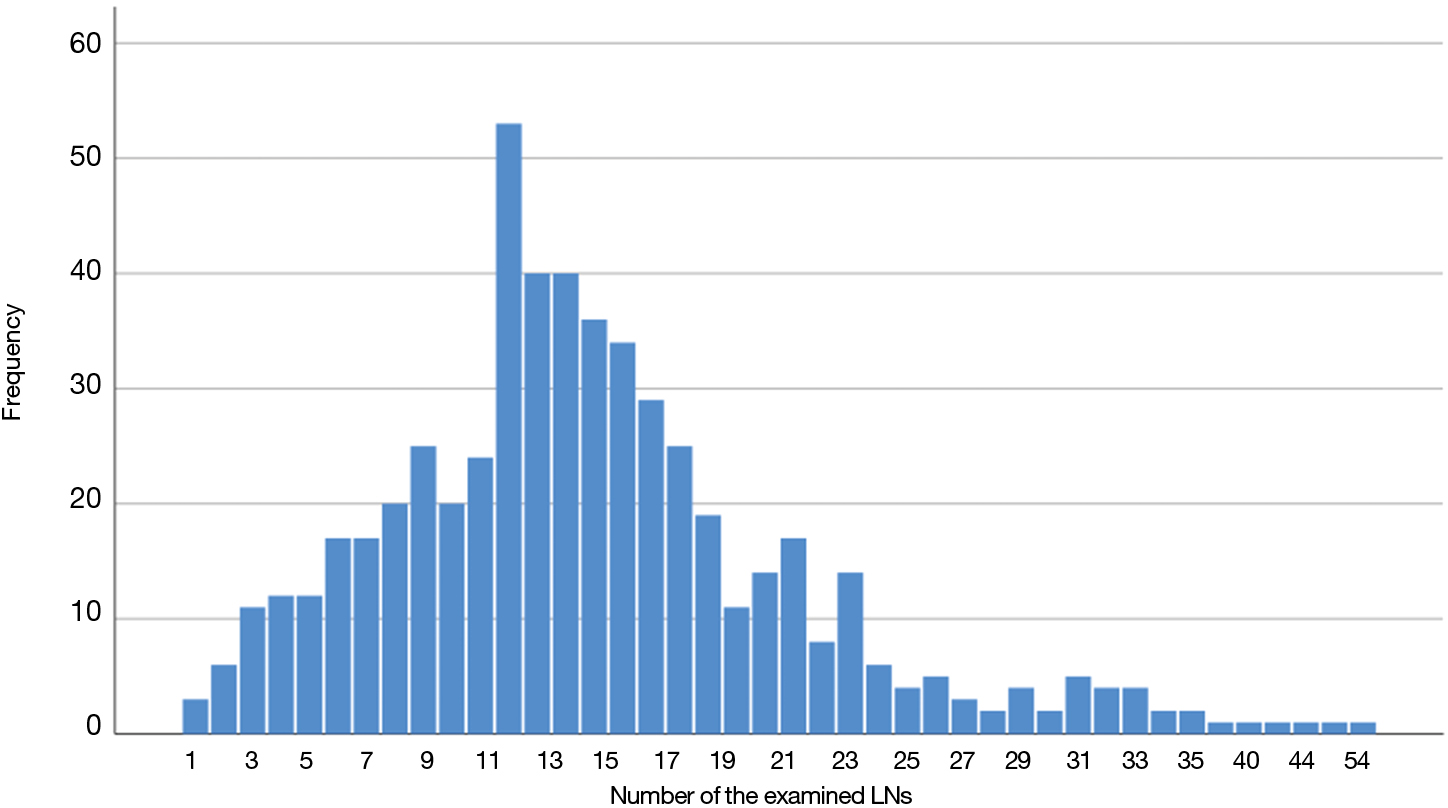 Figure 3 Distribution of the number of resected LNs in 556 patients with stage IV rectal cancer.

Survival outcomes based on the number of resected LNs 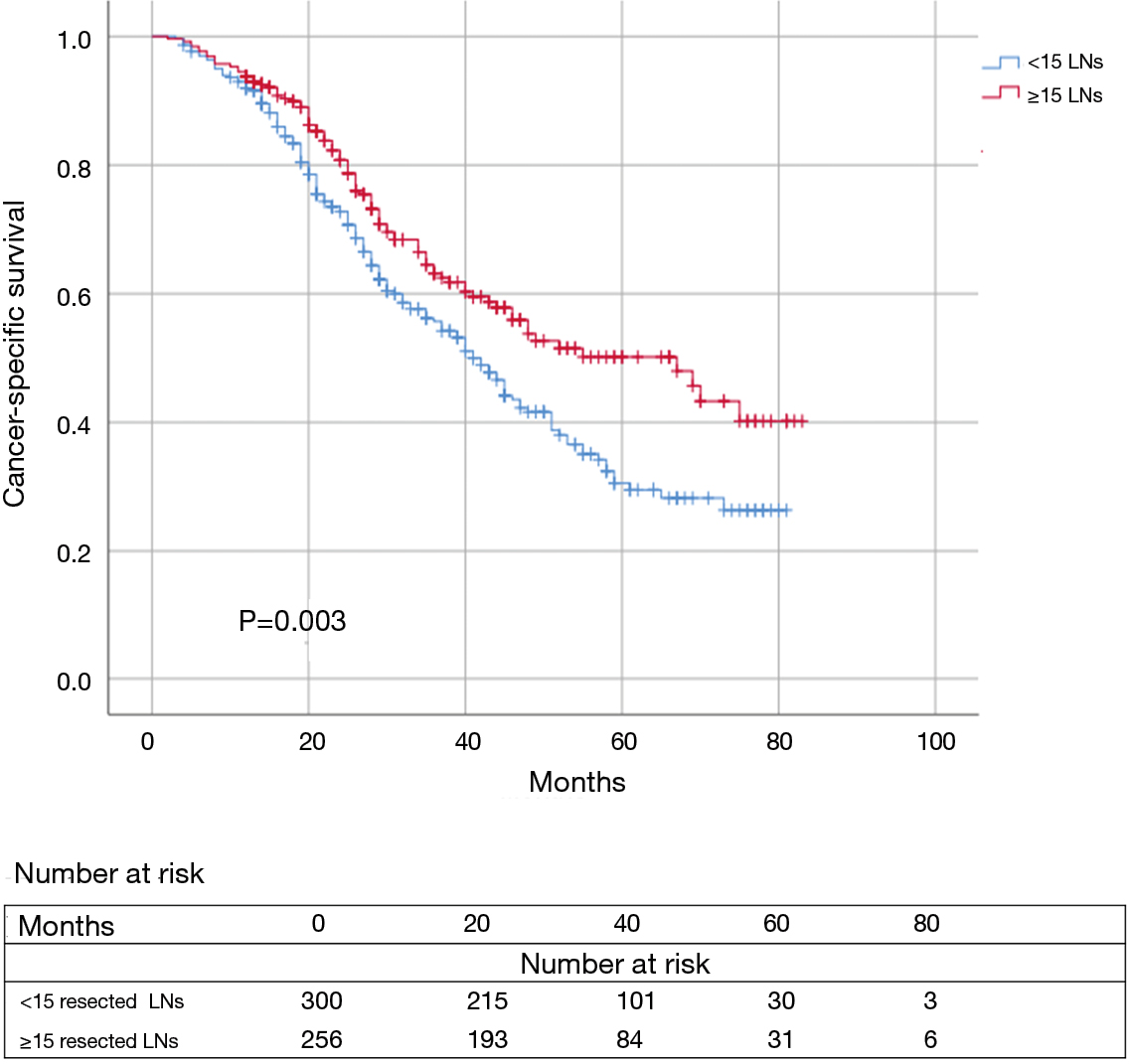 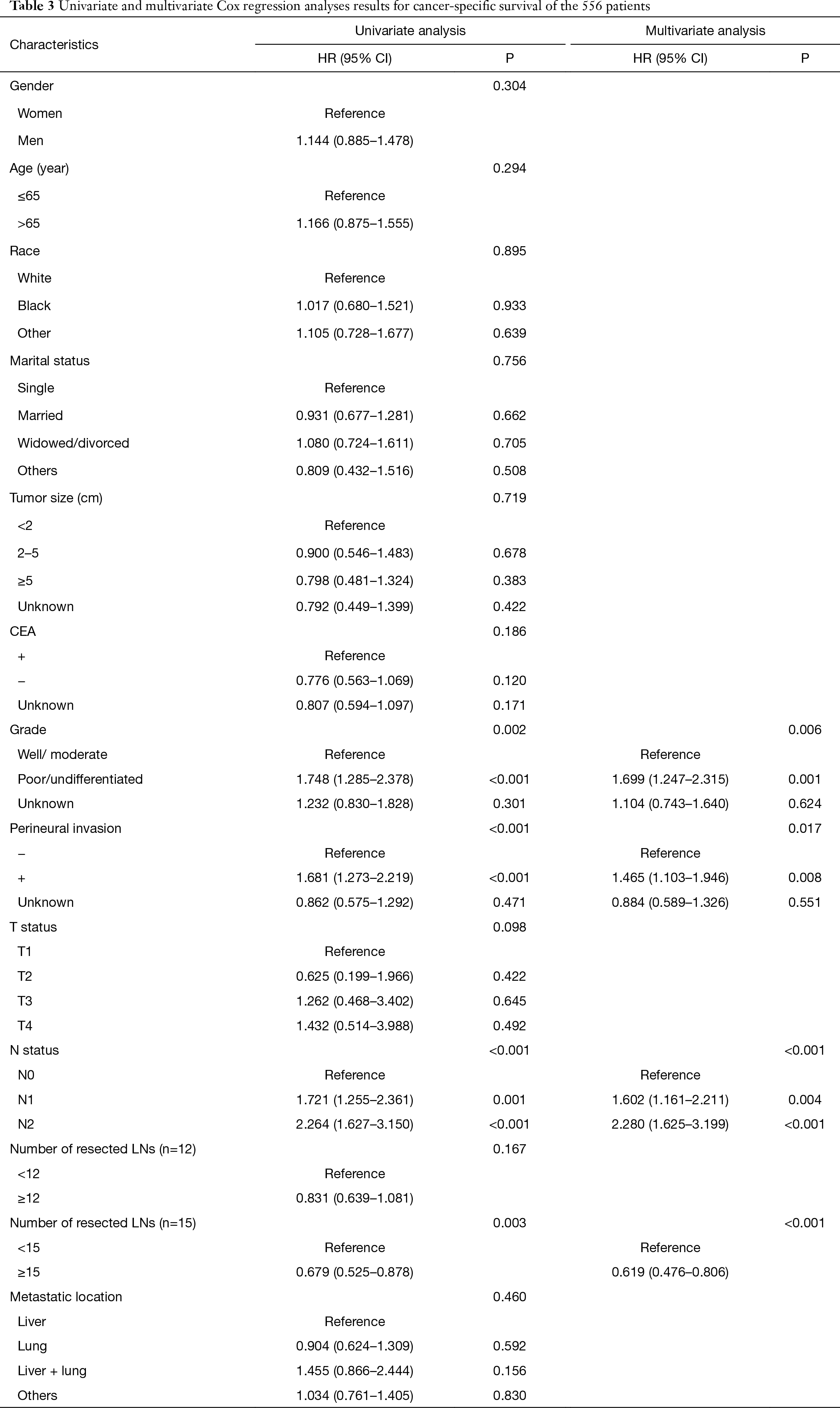 The National Comprehensive Cancer Network (NCCN) recommend that 12 or more LNs should be retrieved for rectal cancer staging. However, many studies have postulated that preoperative chemoradiotherapy reduce the number of LNs examined from the rectal carcinoma specimens (17,18). To date, there is no consensus on an absolute number of LNs that should be recovered for rectal cancer patients with NCRT. Previous studies postulated that the optimal number of LNs to be examined in rectal cancer patients who receive preoperative chemoradiotherapy range between 7 and 30 LNs (19-21).

Cox univariate regression analysis further revealed that there was no association between metastatic location and CSS. This might be attributed to missing or unclear therapy data such as the number and size of metastatic tumors in SEER database thereby leading to bias.

Further to this, lymphadenectomy was found to be still meaningful and necessary for stage IV rectal cancer patients after receiving preoperative therapy based on the number of resected LNs and N status. This finding might be important in developing viable treatment strategies for patients of the special group despite the unfactored effect of the missing and incomplete clinicopathologic information of patients that would ultimately affect their survival. Given that only few previous studies have discussed the role of lymphadenectomy on the survival outcome of stage IV rectal cancer patients after receiving preoperative therapy, this study provided baseline information and direction for future research in this area.

Nevertheless, this study was limited by several factors. Data bias was inevitable because of its retrospective nature. The SEER database did not record surgery treatment details which could have influenced survival outcomes. The radiotherapy field design and dose were unknown which might influence disease recurrence. In addition, the sequence between chemotherapy and surgery was unknown in the SEER database thereby might influence the selection of enrolled patients. Cognizant to this, large prospective studies should be conducted in the future to verify these results.

Indeed, the number of resected LNs is an important independent prognostic factor that influences the survival outcomes of stage IV rectal cancer patients after receiving preoperative therapy. These patients should have 15 or more LNs resected in this study. Nevertheless, large prospective studies should be conducted to further verify the accuracy of this standard.

Reporting Checklist: The authors present the study in accordance with the STROBE reporting checklist. Available at http://dx.doi.org/10.21037/jgo-20-175

Conflicts of Interest: All authors have completed the ICMJE uniform disclosure form (available at http://dx.doi.org/10.21037/jgo-20-175). The authors have no conflicts of interest to declare.

Ethical Statement: The authors are accountable for all aspects of the work in ensuring that questions related to the accuracy or integrity of any part of the work are appropriately investigated and resolved. The study was conducted in accordance with the Declaration of Helsinki (as revised in 2013). The data in the SEER database were publicly available and de-identified thereby no ethics approval was required.