Indolent T-cell lymphoproliferative disorders of the gastrointestinal tract (ITCLD-GTs) are rare lymphoid neoplasms that have been designated as a new disease entity in 2016 by the World Health Organization (1). Histopathological examination of the intestinal mucosa of patients with ITCLD-GT shows a partially preserved mucosa, in addition to chronic inflammation, glandular atrophy, and villous reduction. Small atypical cells of T-lymphocyte origin can also be observed infiltrating the lamina propria or even submucosa. These cells have round or angulated nuclei with indistinct nucleoli. ITCLD-GT lymphoepithelial lesions usually lack necrosis and do not demonstrate vascular invasion (2-4). Patients with this disease usually have a good prognosis although no standardized therapeutic regimen exists. Some patients have prolonged survival even with no drug treatment, with official recommendations calling for a careful ‘watch and wait’ approach (5-11). However, a few reports of ITCLD-GTs showed its possibility of transformation to a higher-grade lymphoma (12-15). In the paper by Perry et al. there were several patients who had enlarged region lymph nodes but little has been establish about whether ITCLD-GTs could infiltrate these lymph nodes because of the lack of pathological examinations (9). In this report we describe a unique, aggressive case of ITCLD-GT that is the first of our knowledge to have confirmed distant lymph node invasion as well as the incidence of a different type of lymphoma, Hodgkin’s lymphoma. We present the following case series in accordance with the CARE-Guideline. Available at http://dx.doi.org/10.21037/jgo-20-54.

The patient was a 42-year-old man who presented a history of dental ulcers, abdominal pain, and diarrhea in September 2017. Bone marrow biopsy showed no abnormal cellular proliferative activity and a colonoscopy showed a rough hyperemic mucosa, multifocal deep ulcers suggestive of inflammatory bowel disease (IBD) changes in the rectum, sigmoid colon, descending colon, transverse colon, ascending colon, and cecum, with no observable masses (Figure 1A,B). A biopsy of these lesions led to a diagnosis of ITCLD-GT. The patient was treated with mesalamine, compound glutamine, and the probiotic cocktail Bifico as a symptomatic and anti-inflammatory therapeutic regimen. However, no chemotherapy was given and the patient’s response was limited. We identified neck lymphadenopathy on MRI during the patient’s one-year ITCLD-GT follow up. A biopsy of the enlarged lymph nodes identified the same pathologic T cells found in the gastrointestinal tract (GIT) as well as classical cells associated with Hodgkin’s lymphoma. Further endoscopic examination reappraised the gastrointestinal condition in October 2018 (Figure 1C,D), with similar inflammatory changes found the year prior. A biopsy showed the same pathological changes in the descending colon and cecum as in 2017, confirming that the diagnosis was still ITCLD-GT, yet there was no evidence of disease progression.

Macroscopic examination showed similar GIT pathological features in 2017 and 2018. In 2017, multiple chronic inflammatory lesions were found in the ascending and sigmoid colon, as well as in the cecum. A predominant group of small to intermediate-sized lymphocytes was also noticed in the lamina propria (Figure 2). These lymphocytic cells were monomorphic and arranged in a nodular pattern with no clear boundary and no normal lymph node structures (e.g., follicles) were present. These cells also demonstrated an irregular nucleus with normally sized, yet pale cytoplasm. Mitotic figures were rare and no evidence of necrosis was present. The tumor cells seemed to be noninvasive and were restricted to the glands or crypts, with no observable lymphoepithelial lesions. Immunohistochemical (IHC) staining showed the pathologic lymphoid cells were positive for CD3, CD8, and TIA-1 and negative for CD20, CD4, CD5, CD56, and TdT. The proliferation index as determined by Ki-67 staining was ~5–10% (Figure 2B,C,D). Molecular testing using a polymerase chain reaction (PCR) showed γ TCR gene rearrangement (Figure 3). No immunoglobulin gene rearrangement was found. Histopathologic analysis in 2018 revealed similar morphological changes with no progression from the initial analysis in 2017 (Figure 2E). Repeat IHC again showed positive staining for CD3, CD8, and CD43 (CD43 was not in the first analysis but was in this analysis) while negative for CD20, CD4 and fluorescence in situ hybridization for EBER (EBER was not in the first analysis but was in this analysis). An 8% Ki-67 proliferation was also similar to earlier analysis (Figure 2F,G,H).

During the 2018 follow-up, we also histologically evaluated the neck lymph nodes biopsy and found lesions consistent with the mixed cellularity type of Hodgkin’s lymphoma. This included typical Hodgkin and Reed-Sternberg cells that were surrounded by lymphocytes, plasma cells, and eosinophilic granulocytes (Figure 4A). IHC of Hodgkin cells showed CD15+ and CD30+ cells that were also weakly positive for Pax-5 and CD20- (Figure 4B,C,D). In situ hybridization for EBER was also positive (Figure 4E). The background of the lesion was rich with small to medium-sized lymphocytes that were either CD4+ or CD8+. The number of the CD8+ cells was much more than the CD4+ cells and the CD8+ cells were little larger than the CD4+ cells, which indicated the CD8+ cells were neoplastic (Figure 4F). The atypical CD8+ lymphocytes were similar to those in the GIT, and PCR testing showed they had overlapping peaks (Figure 3B). Antibodies used for IHC analysis are summarized in Table 1. 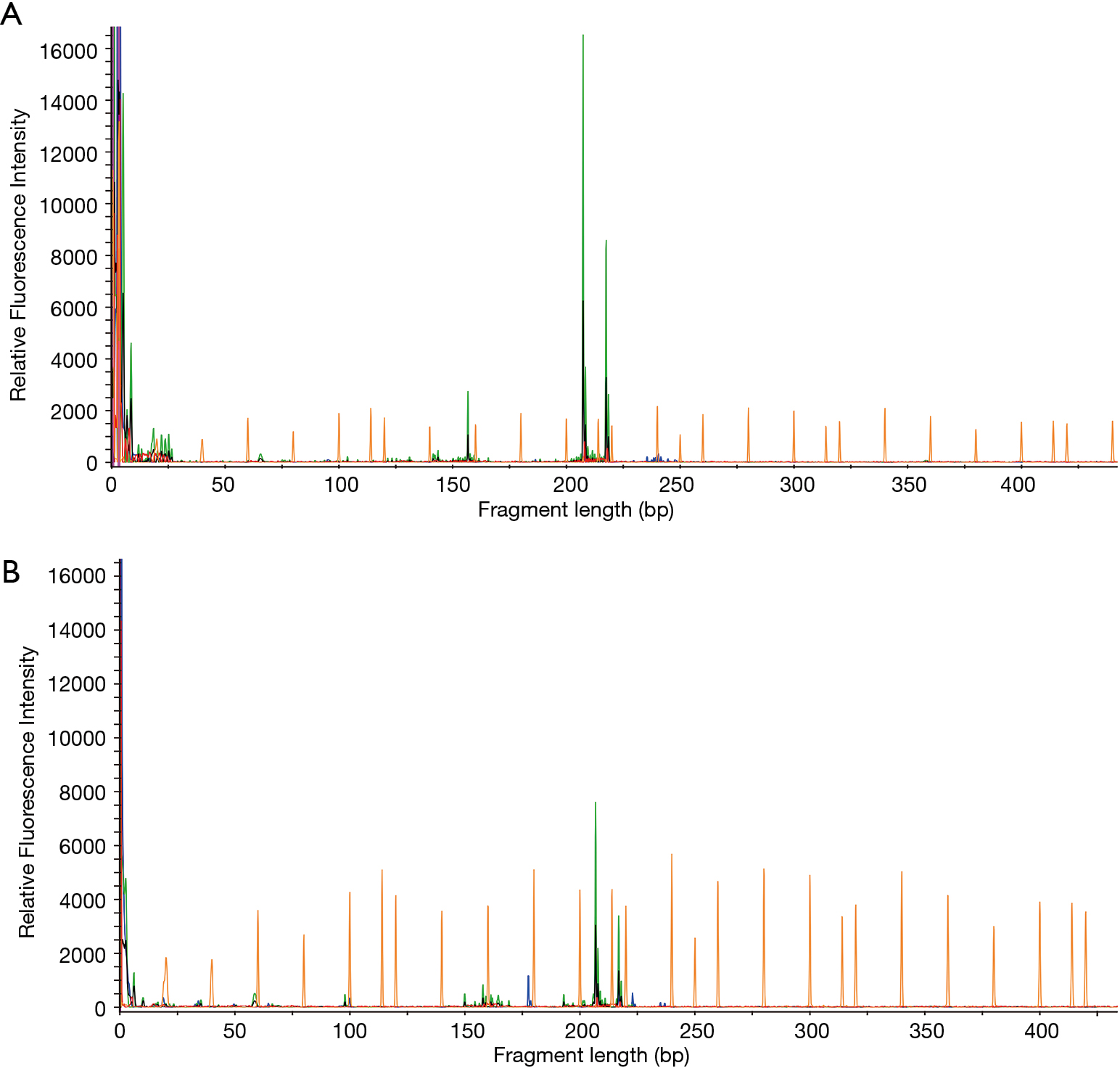 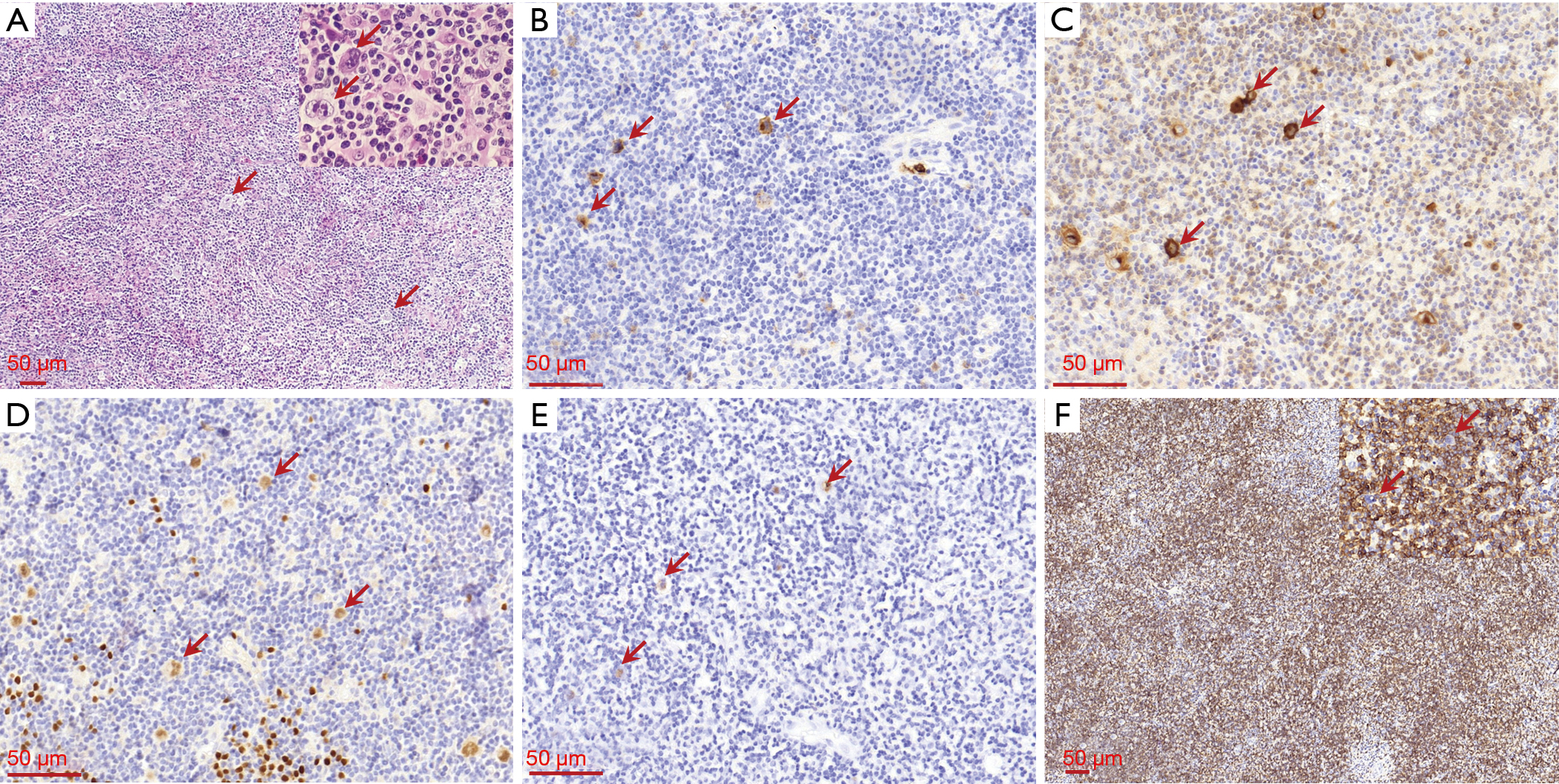 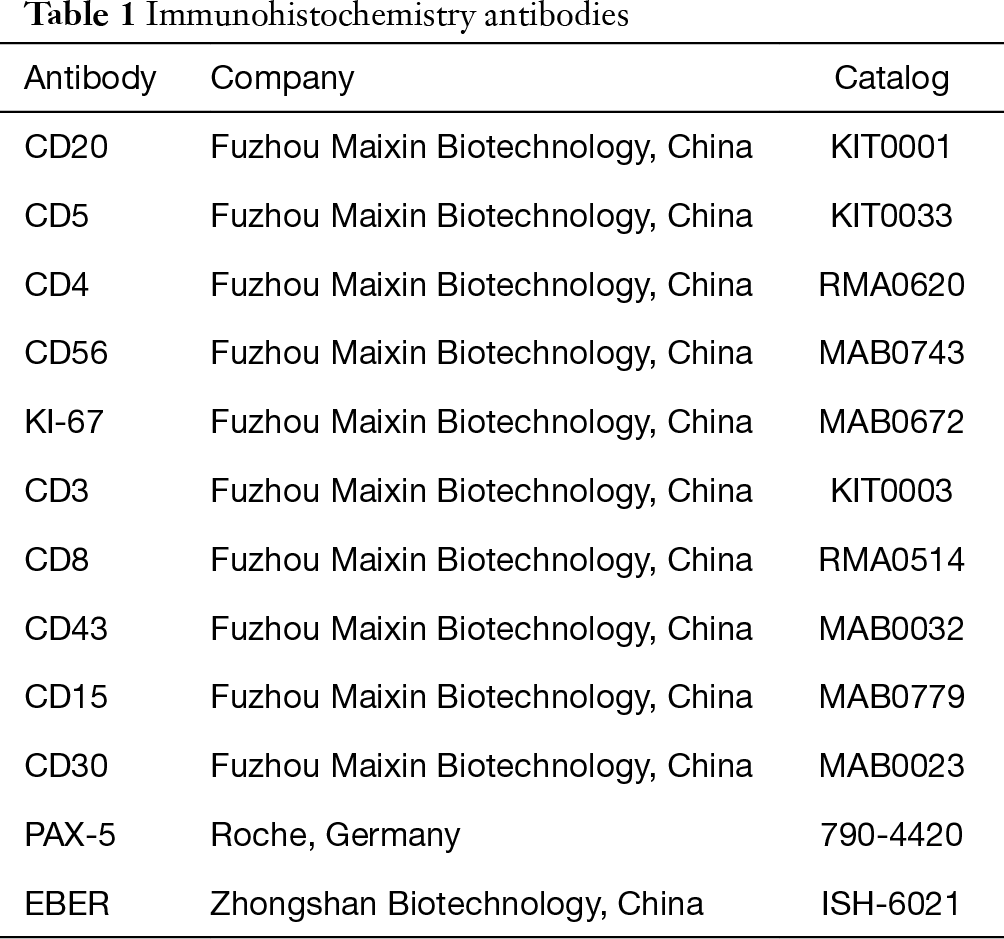 This study was approved by the Medical Ethics Committee of the affiliated hospital of Qingdao university. All procedures performed in this case study were in accordance with the ethical standards of the institutional and/or national research committee(s) and with the Helsinki Declaration (as revised in 2013). Written informed consent was obtained from the patient for publication of this Case report and any accompanying images. A copy of the written consent is available for review by the Editor-in-Chief of this journal.

Mucosal T cells in the GIT are essential for both immunotolerance and immunoreaction (16). Proliferative disorders of these cells can result in diverse, benign or malignant clinical outcomes, necessitating the need for selection of an appropriate treatment modality (17). ITCLD-GT is a rare but newly recognized disease entity, established during the 2016 revision of the World Health Organization’s classification of lymphoid neoplasms (1). Our patient with ITCLD-GT had a clinical history and histopathologic disease features similar to prior reports (5,6). The infiltrated atypical lymphoid cells were small to medium-sized and derived from CD8+ T cells. They also localized between the glands, had a low proliferative index, and showed no substantial disruption of the mucosal architecture. Benign morphologic changes such as the absence of lymphoepithelial lesions and necrosis help distinguish ITCLD-GT diagnosis from other differential diagnoses, including IBD (which has lesions with more inflammatory features and enteropathy-associated T-cell lymphoma (EATL) which is highly invasive. Histopathology from the initial biopsy showed a group of atypical tumor-like cells that could have been easily misdiagnosed as type II EATL (18), however EATL is highly destructive with features of vessel infiltration and lymphoepithelial lesions, which was not found in our analysis (19,20). Type II EATL is also CD56+ and CD43- which is inconsistent with our patient’s tumor. A low Ki-67 proliferation index in the 2017 and 2018 analysis confirmed the indolence of the tumor as well.

The most important characteristic of ITCLD-GT is its indolence, as the most often recommended strategy is a careful “watch and wait” approach. This is because chemotherapy is not recommended, as most patients have a good prognosis even without drug therapy (5-7). Prior reports suggest pathological cells usually remain in the GIT and are not likely to infiltrate distant sites (21). Lesion progression into a higher grade lymphoma has been reported but this conclusion remains controversial (14,22). In our patient, the lesions initially appeared indolent during follow up with no evidence of a disease progression to a higher-grade lymphoma, suggesting the patient did not need to receive excessive medical treatment such as chemotherapy. Later follow up however revealed the new onset of an entirely distinct type and higher-grade lymphoma, at a distant location from the bowel, that was diagnosed as classic Hodgkin’s lymphoma (mixed cellularity Hodgkin lymphoma, MCCHL). Analysis of the Hodgkin lesion in the neck revealed the same pathological lymphoid cells as the GIT. We confirmed the origin of these cells using analysis of cellular morphology, immunostaining, as well as genetic analysis. Our findings support the conclusion that that indolent, pathologic cells can distantly infiltrate other tissues, which is in agreement with a prior report on ITCLD-GT (21).

ITCLD-GT usually are Epstein-Barr virus (EBV) negative (22), most cases of HL are EBV negative too. However, the subtype of MCCHL is frequently associated with EBV (23-25). Our patient was EBV negative in the ITCLD-GT cells but positive in the Hodgkin cells. Prior work has shown that classic Hodgkin’s lymphoma may begin to develop during viral infections, which induce an active immune response (26,27), especially during acute EBV infections. Hodgkin’s lymphoma cells are known to upregulate PD-L1, which can bind to inhibitory PD-1 receptors present on T cells (28). The PD-1/PD-L1 axis is also important in Hodgkin’s lymphoma because genetic alterations such as 9p21.1 chromosomal rearrangement can mediate high PD-L1 expression. PD-L1 upregulation in Hodgkin’s lymphoma following EBV infection is responsible for Hodgkin’s lymphoma sensitivity to PD-1 blockade (29,30). So, CHL genesis is related to immune downregulation of the body. In our case, the co-exist of EBV infection in the lymph node maybe an indispensable factor that trigger the onset of CHL.

In China, CHL is not very common accounting only for about 8% of all lymphomas, which is lower than in western countries. The case we report is quite unique because it covers two rare diseases. These two processes may completely unrelated, for example, given the persistent high burden of ITCLD-GTs in the bowel since 2017, the neoplastic cells are probably circulating in the blood and some are homing into the neck lymph node. As we know, T cell accumulation in the Hodgkin’s lymphoma tumor microenvironment as well as disparate T cell responses confirm that aberrant T cells with abnormal signal transduction may be critical for Hodgkin Lymphoma incident and enhancement (31,32). In our case, a subsequent CHL arising in a lymph node with involvement by ITCLD-GT, a group of aberrant T cells. Maybe, it still could not completely rule out that there is some potential unrevealed relationship between them which to be studied.

In summary, we report an unusual case of a CD8+ ITCLD-GT with TCR γ rearrangement which was accompanied by abenteric distant infiltration into neck lymph nodes and new onset of classic Hodgkin’s lymphoma. To our knowledge, this is the first report of an ITCLD-GT with a newly acquired Hodgkin’s lymphoma distantly. Notably the ITCLD-GT was found at multiple gastrointestinal sites yet no higher-grade lymphoma transformation occurred even though the patient was only given supportive therapy and no anti-neoplastic therapy. However, distant infiltration could happen as well as coexisted with other lesions. Thus, comprehensive evaluation of patients with ITCLD-GT is necessary for evaluation and selection of appropriate clinical treatments.

Reporting Checklist: The authors have completed the CARE reporting checklist. Available at http://dx.doi.org/10.21037/jgo-20-54

Conflicts of Interest: All authors have completed the ICMJE uniform disclosure form (available at: http://dx.doi.org/10.21037/ jgo-20-54). The authors have no conflicts of interest to declare.