Gastric cancer (GC) is currently one of most frequently diagnosed causes of death worldwide (1). Though surgical operation and adjuvant chemotherapy have been confirmed to be effective in improving prognosis of GC, patients with GC often developed post-operative relapse and the 5-year overall survival (OS) of GC remains very poor (2,3). Therefore, Thus, it is urgently need to identify the underlying mechanisms and biomarkers for the progression of GC.

Recent reports showed that alteration of lipid metabolism is a critical metabolic feature for cancer cells and has been reported to be able to contribute to tumor progression (4-8). Cancer cells always showed high rate of fatty acid oxidation (FAO) to produce energy and thus maintaining the rapid growth of cancer cells (9-13). Several enzymes catalyzing FAO have been identified in solid tumors. Carnitine palmitoyltransferase 1 (CPT1), a key enzyme in FAO, is a rate-limiting FAO enzyme that is responsible for transporting fatty acid into mitochondria and has been implicated in regulating cancer development and progression, which makes CPT1 as a potential therapeutic target for the treatment of cancer (10). However, limited studies have been conducted to reveal the prognostic and oncogenic role of CPT1 in GC and no previous studies have investigated carnitine palmitoyltransferase 1C (CPT1C), one of the CPT1 isoforms, in GC.

CPT1A, CPT1B and CPT1C are three isoforms of CPT1 (14). In this present study, we demonstrated that high expression of CPT1C instead of CPT1A and CPT1B was negatively associated with OS and disease free survival (DFS) of GC patients in The Cancer Genome Atlas (TCGA) and Gene Expression Omnibus (GEO) cohorts. Further functional study showed that attenuated CPT1C expression inhibited proliferation in GC cells, while enhanced CPT1C expression exhibited opposite effects. We present the following article in accordance with the STROBE reporting checklist. Available at http://dx.doi.org/10.21037/jgo-20-157.

Microarray data from GSE62254 dataset were downloaded from GEO (http://www.ncbi.nlm.nih.gov/geo/). The raw CEL files were downloaded and Robust Multichip Average (RMA) method was used to conduct background adjust and data normalization (15). And then, Affymetrix HG-U133 Plus 2.0 probe set IDs were mapped to the NetAffx Annotation Files.

The human GC cell lines used in this study were originally obtained from the American.

Type Culture Collection (Manassas, VA, USA). All cells were cultured in 1640 supplemented with 10% fetal bovine serum at 37 °C under a humidified atmosphere containing 5% CO2. Four kinds of GC cell lines with distinct aggressive features including AGS, MGC803, MNK45 and SGC7901 were used in this study.

Assessment of FAO in GC cells was performed using FAO assay kit (Abcam) according to the manufacturer’s instructions.

All statistical analyses were performed using R software (R version 3.5.0, https://www.r-project.org/). Data was presented as mean ± standard deviation. Significant differences between two groups were computed using Wilcoxon rank-sum test for data with skewed distribution or Student’s test for data with normal distribution. Univariate Cox regression analysis was used to detect the prognostic factor for OS and DFS. The median value of CPT1s was used to divided patients into low and high level groups and Kaplan-Meier method was further used to calculate the cumulative survival rate and log-rank test was used to compare survival difference. The Spearman rank correlation test was used to examine the association between HIF1A and CPT1C expression. P value <0.05 was considered significant.

The study was conducted in accordance with the Declaration of Helsinki (as revised in 2013). The study has been examined and approved by the Pujiang People’s Hospital (No. 04073-3-1711A). Informed consent was not available in this study for all the data of patients were derived from public TCGA and GEO databases.

CPT1C was a prognostic biomarker in TCGA dataset

A total of 407 GC patients with RNA-seq expression data and follow-up information were identified from TCGA database. The basic clinical feature was described in Table 1. The distribution of CPT1A, CPT1B and CPT1C expression were demonstrated in Figure S1A and CPT1A showed the highest average expression level. 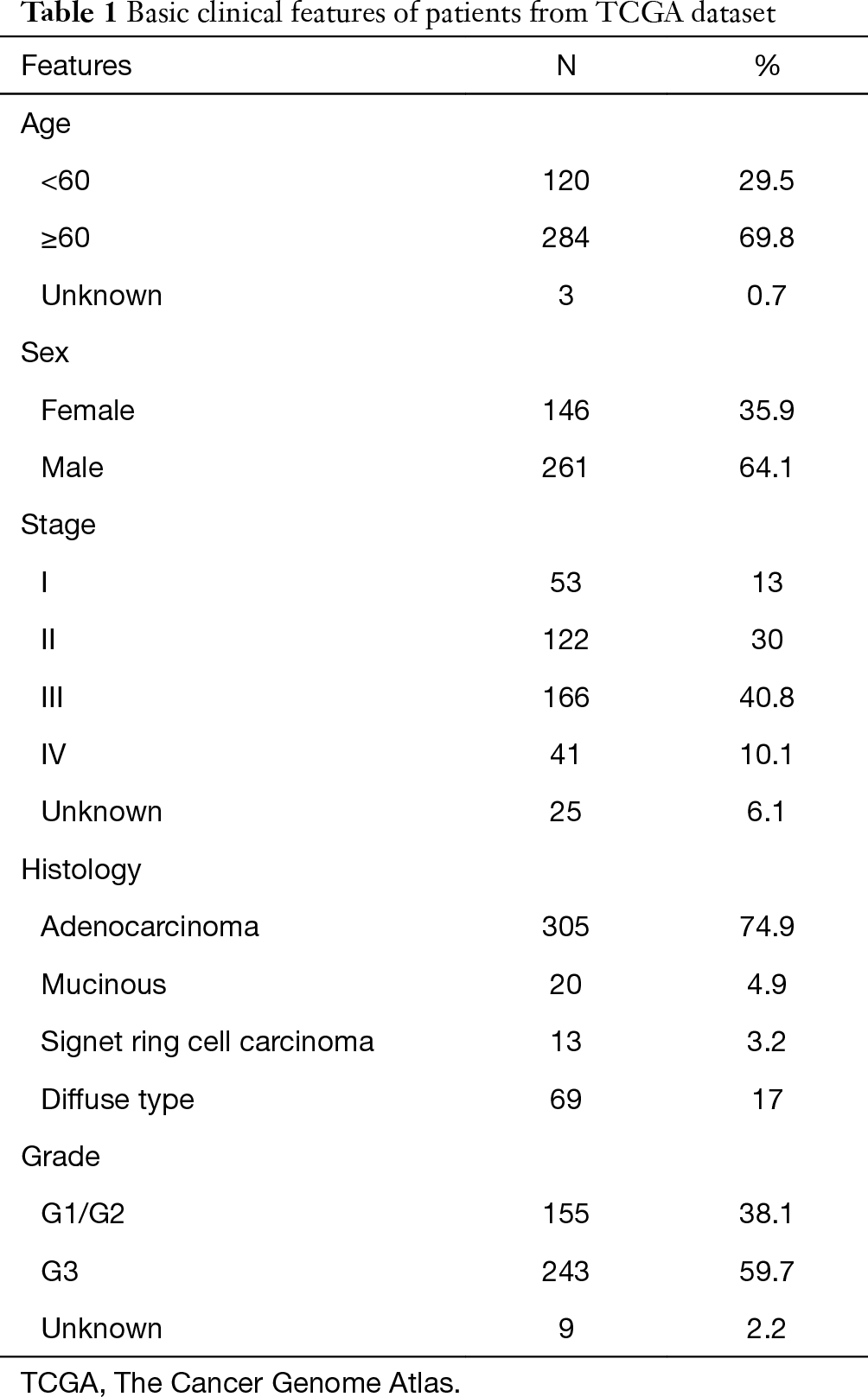 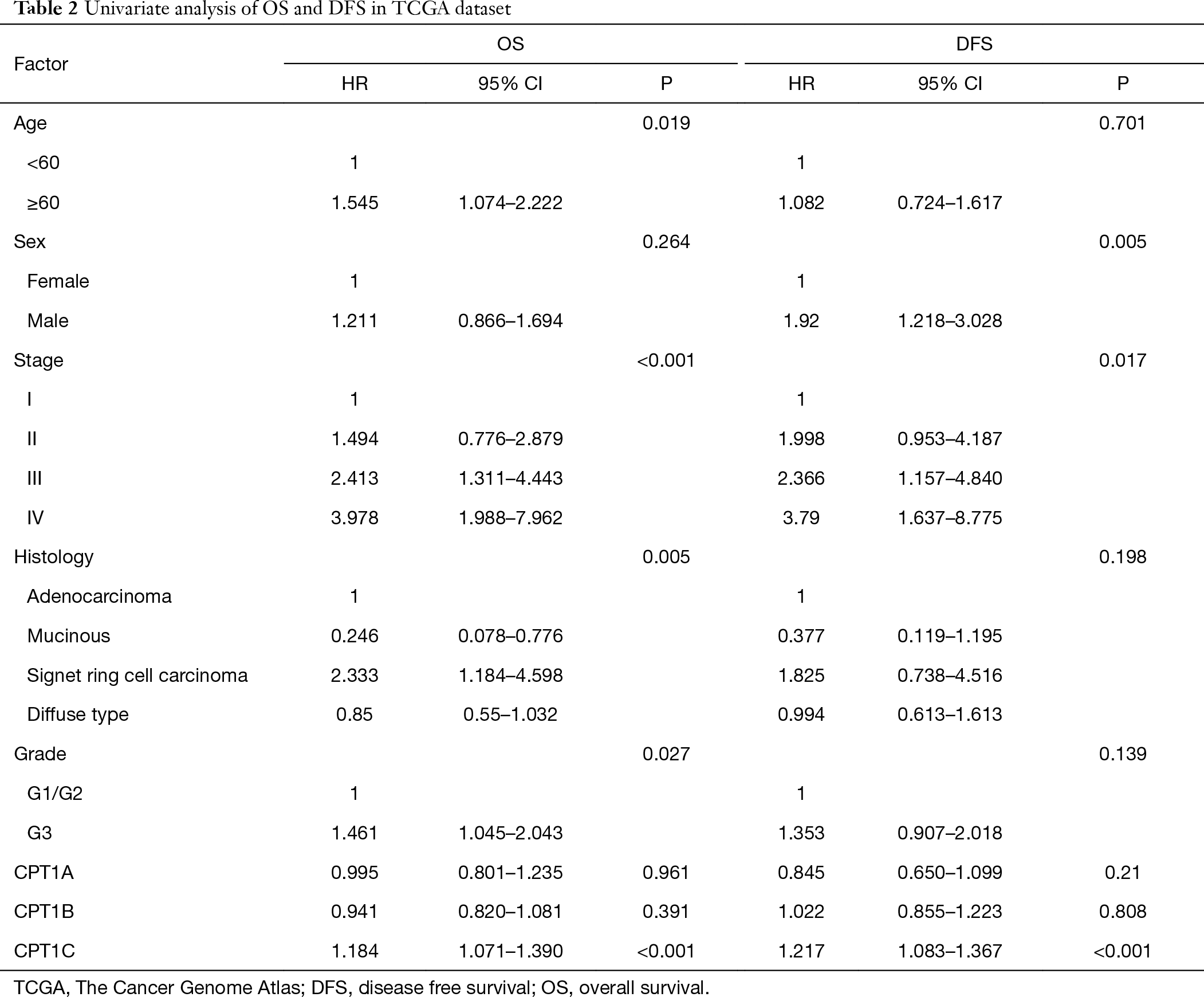 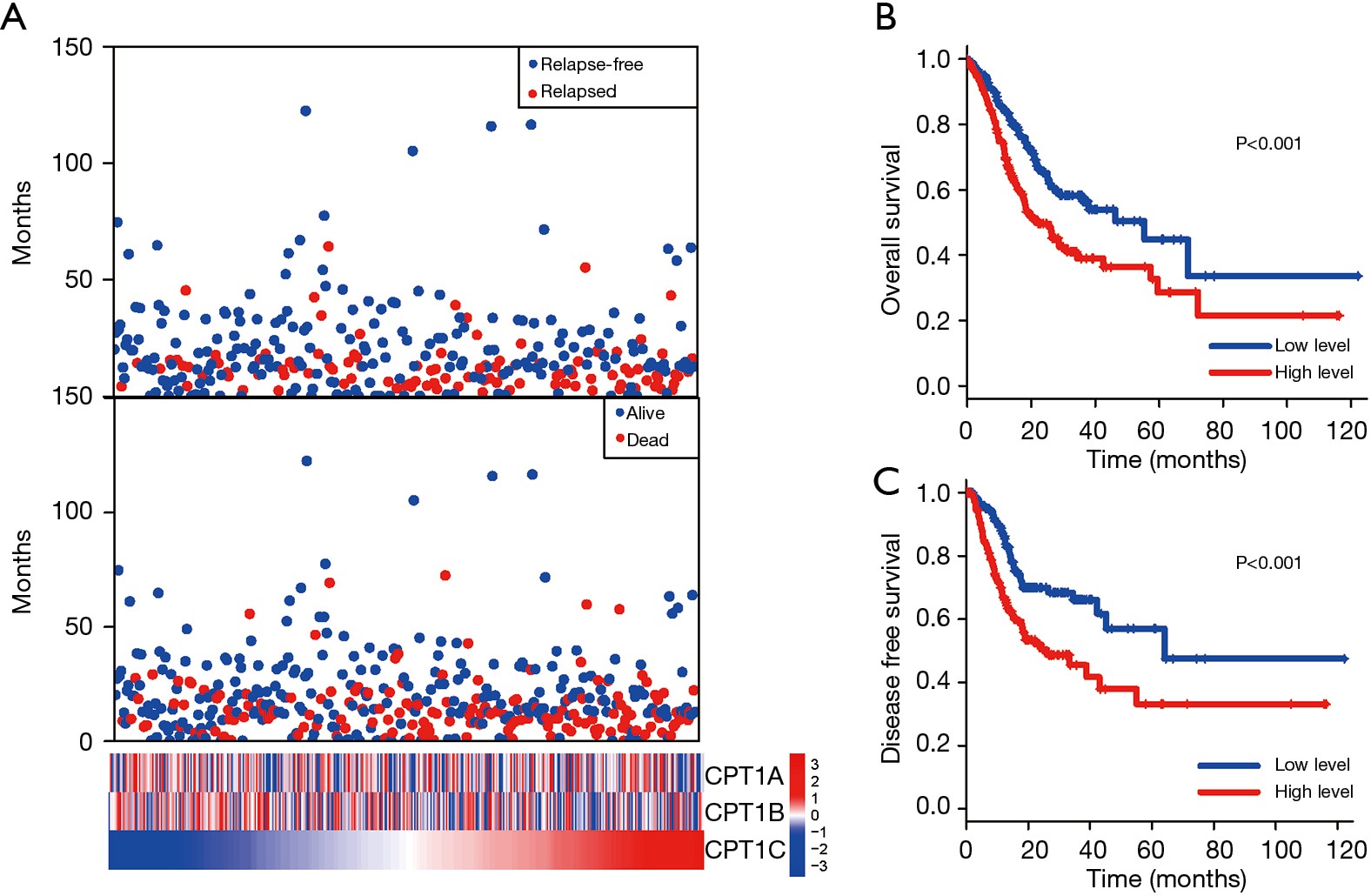 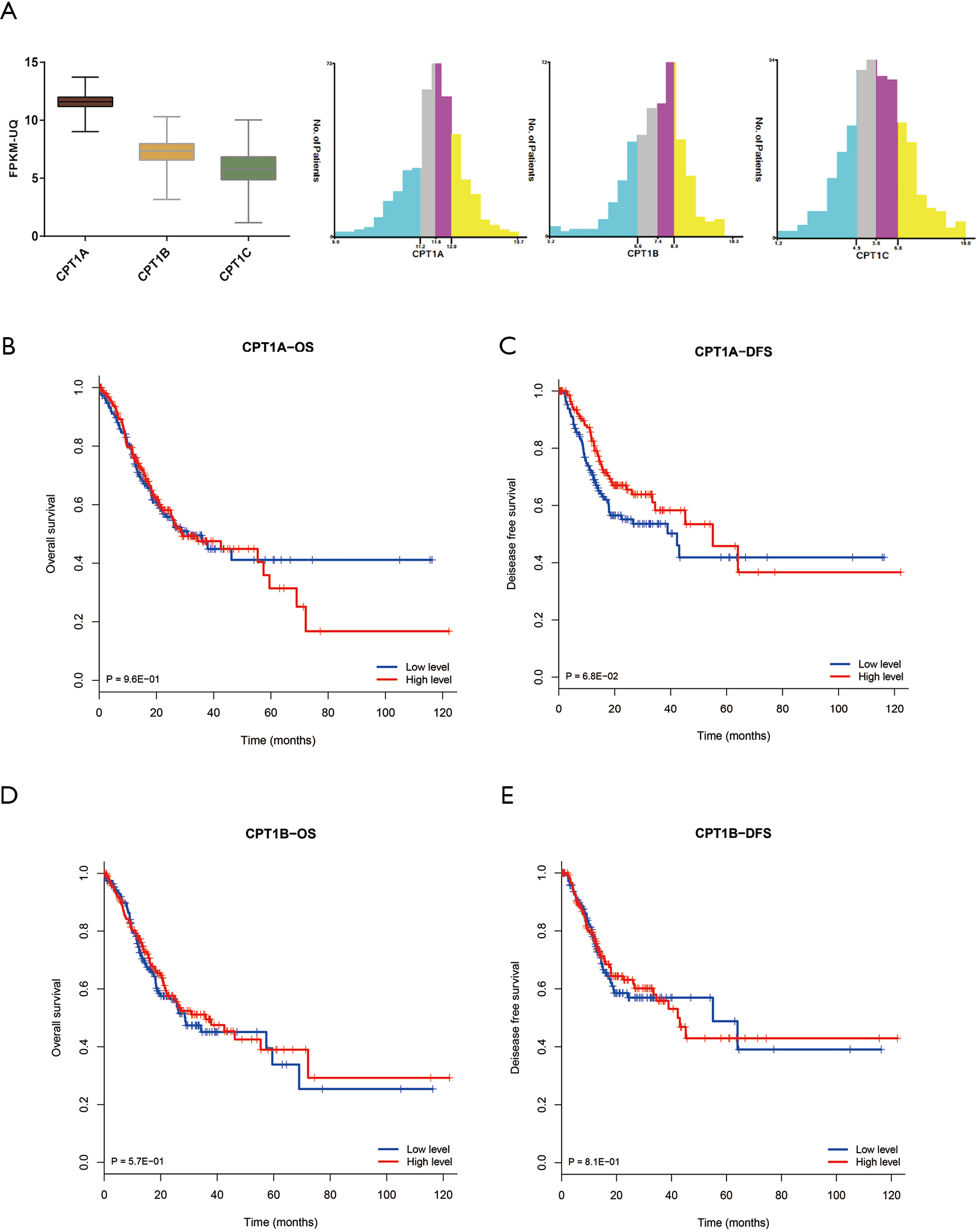 Three hundred GC patients with micro-array data were identified from GSE62254 dataset in GEO database. The baseline clinicopathological features of these patients were showed in Table 4. All the patients in this dataset have complete follow-up information. 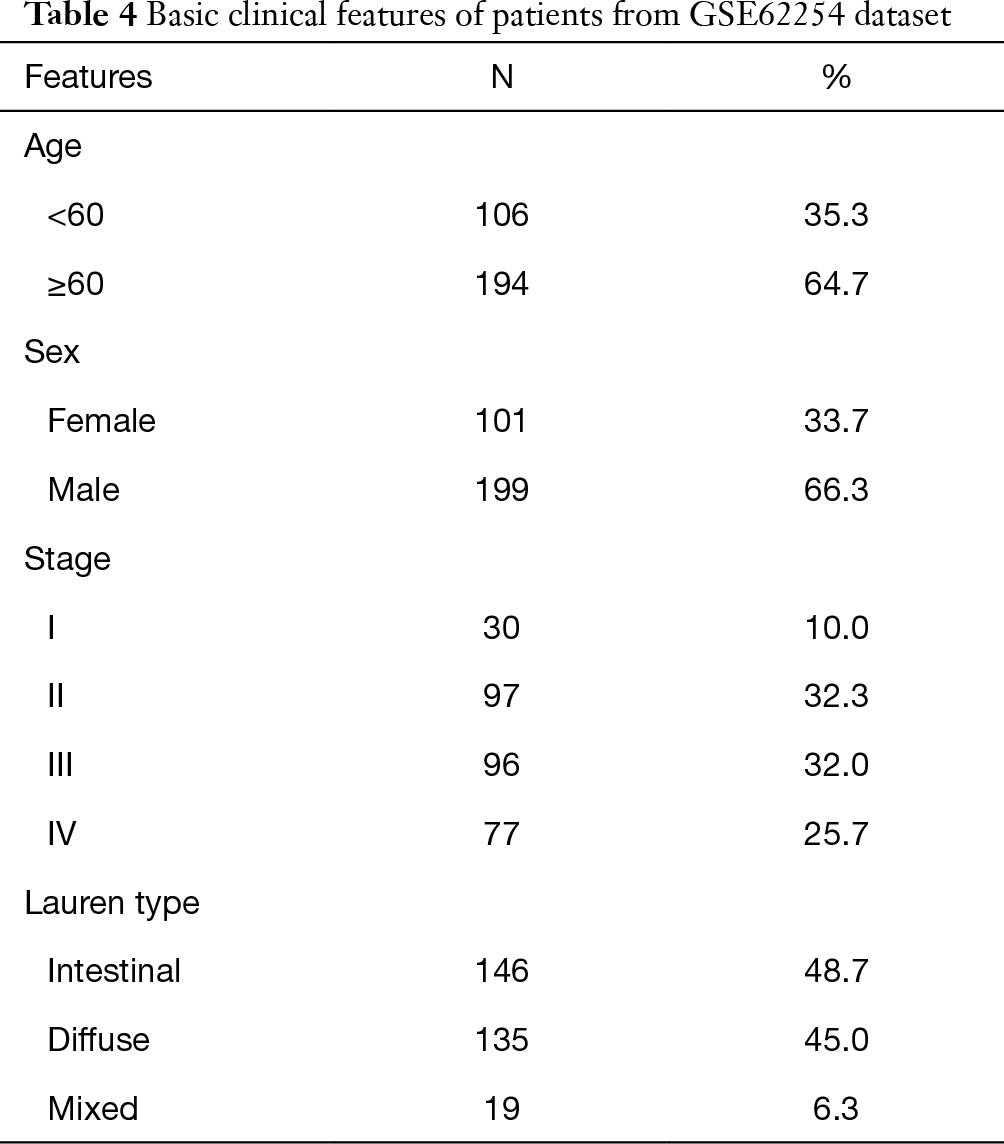 Consistent with results in TCGA cohort, Cox regression analysis showed that CPT1C was the only prognostic gene for OS and DFS among the three isoforms (Tables 5,6). Based on the median value of CPT1C expression, patients were divided into two groups with significantly different death and recurrence risk and high expression of CPT1C was statistically associated with poor OS (Figure 2A) and DFS (Figure 2B). Instead, same as the results in TCGA cohort, no significant difference was observed between survival curves of patients with high or low expression of CPT1A (Figure 2C,D) and CPT1B (Figure 2E,F). 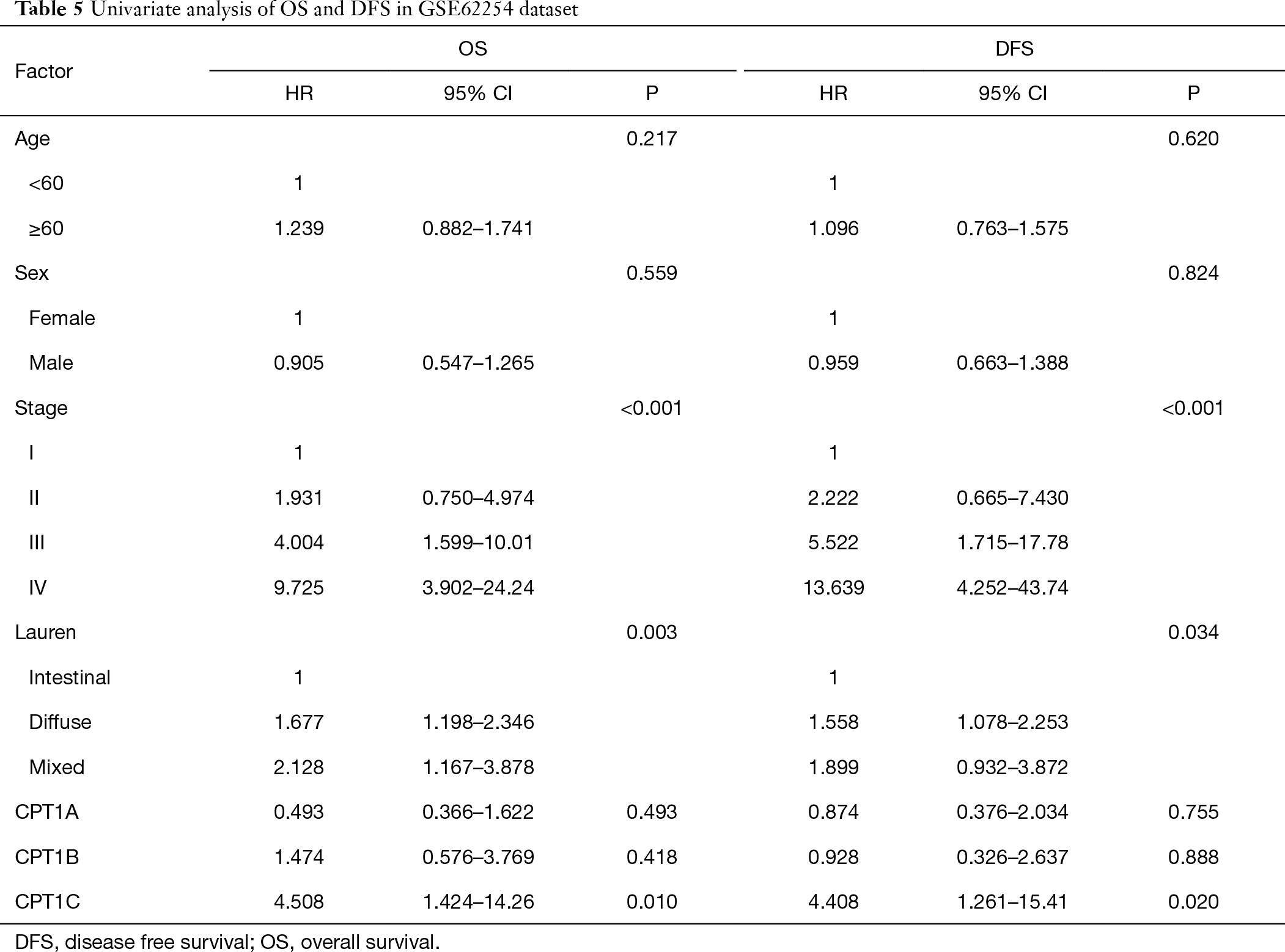 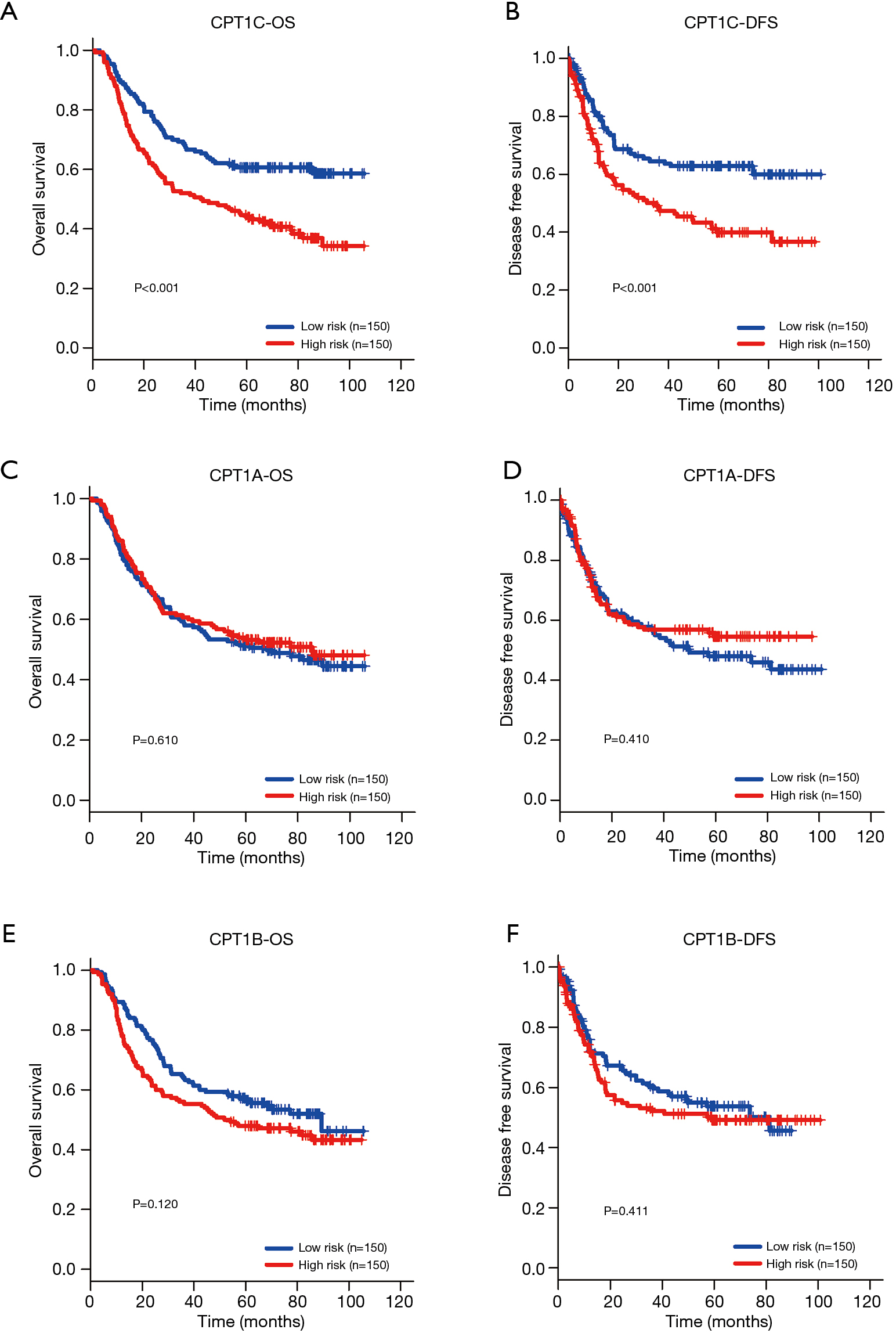 FAO mediated by CPT1C is important for GC cells growth 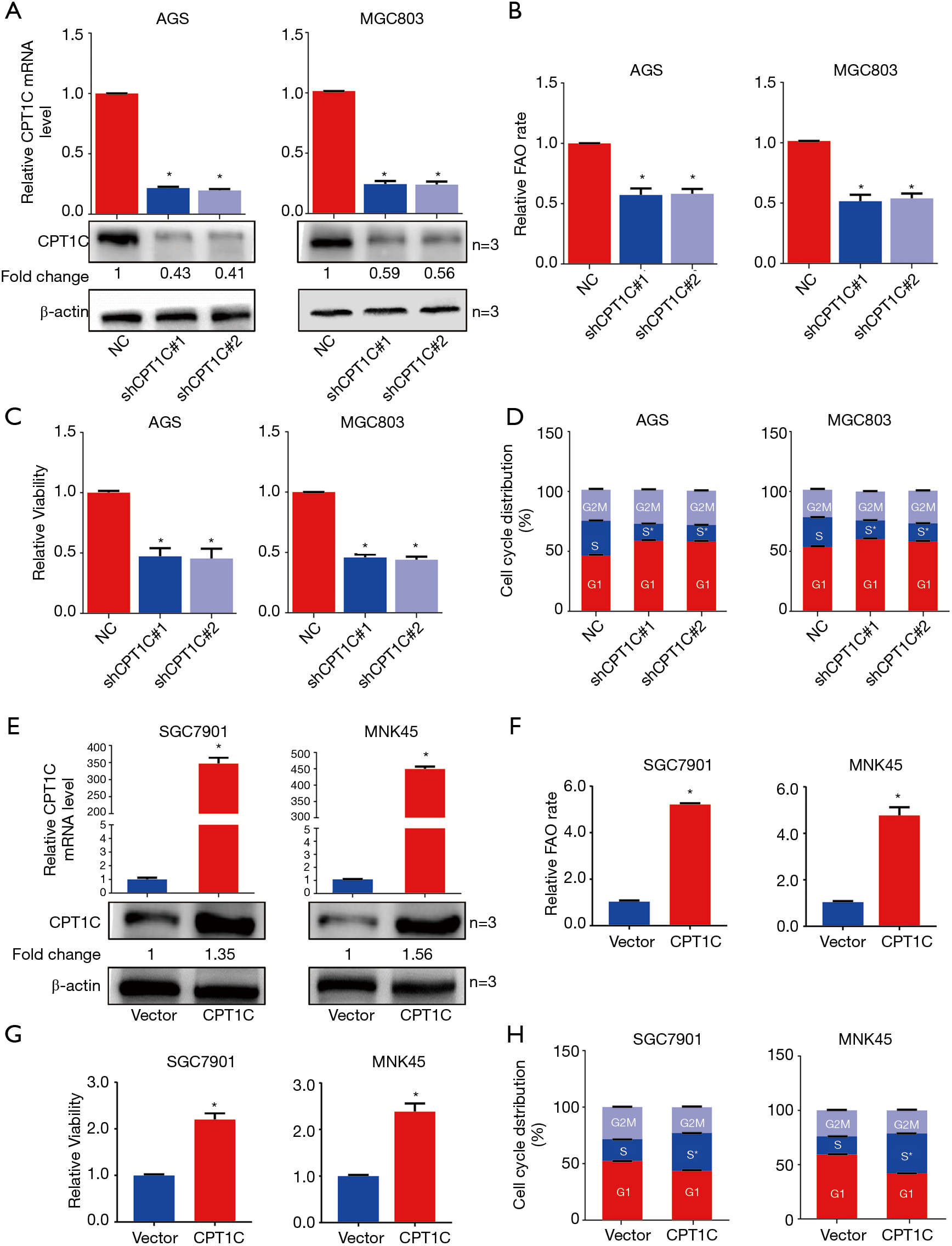 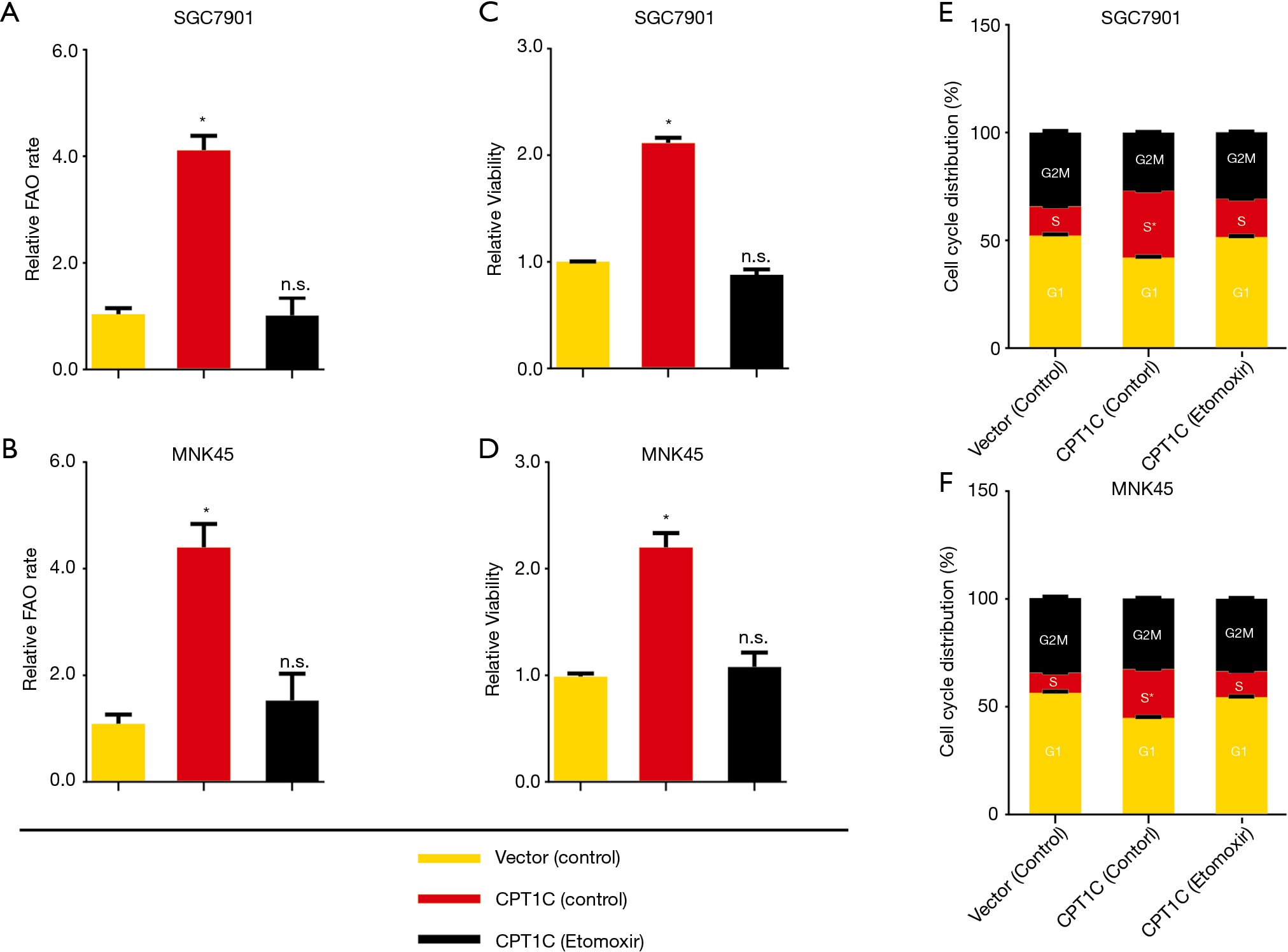 The hypoxia-inducible factor family of transcription factors plays a key role in regulating metabolic gene expression and HIF1α was the most extensively studied factor. Therefore, we hypothesized that HIF1α may transcriptionally regulate CPT1C in GC. To verify this hypothesis, we firstly analyzed the association of gene expression between CPT1C and the HIF1A (encoding HIF1α) and found that HIF1A expression was significantly positively associated with CPT1C (Figure 5A). We then enforced HIF1α expression in GC cells and found that CPT1C expression was notably elevated correspondingly (Figure 5B,C). Additionally, luciferase assay showed that enforced HIF1α expression in GC cells augmented CPT1C promoter transcription in a dose-dependent manner (Figure 5D). In this study, all the original uncropped Western blots of each band were showed in Figure S2. 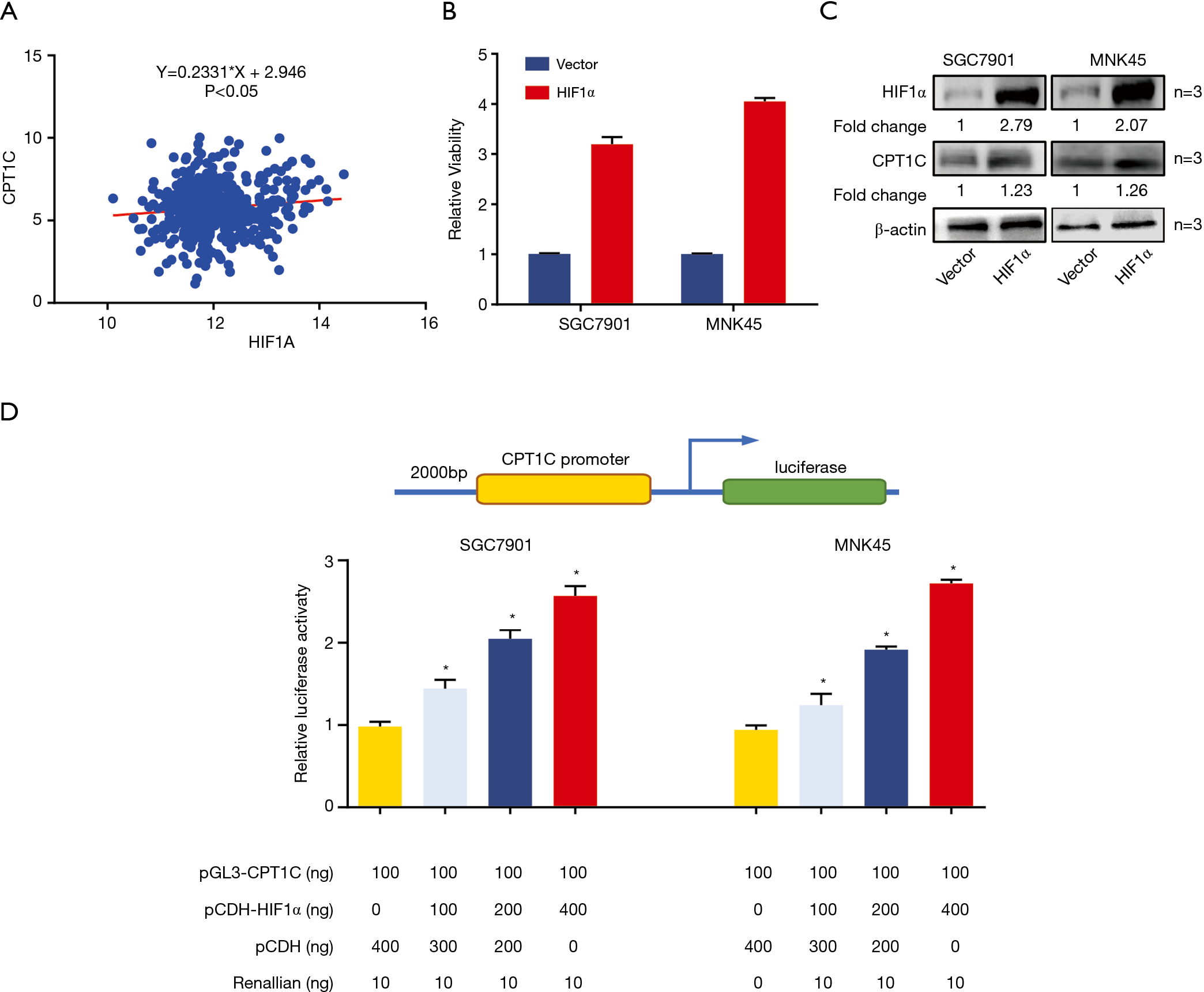 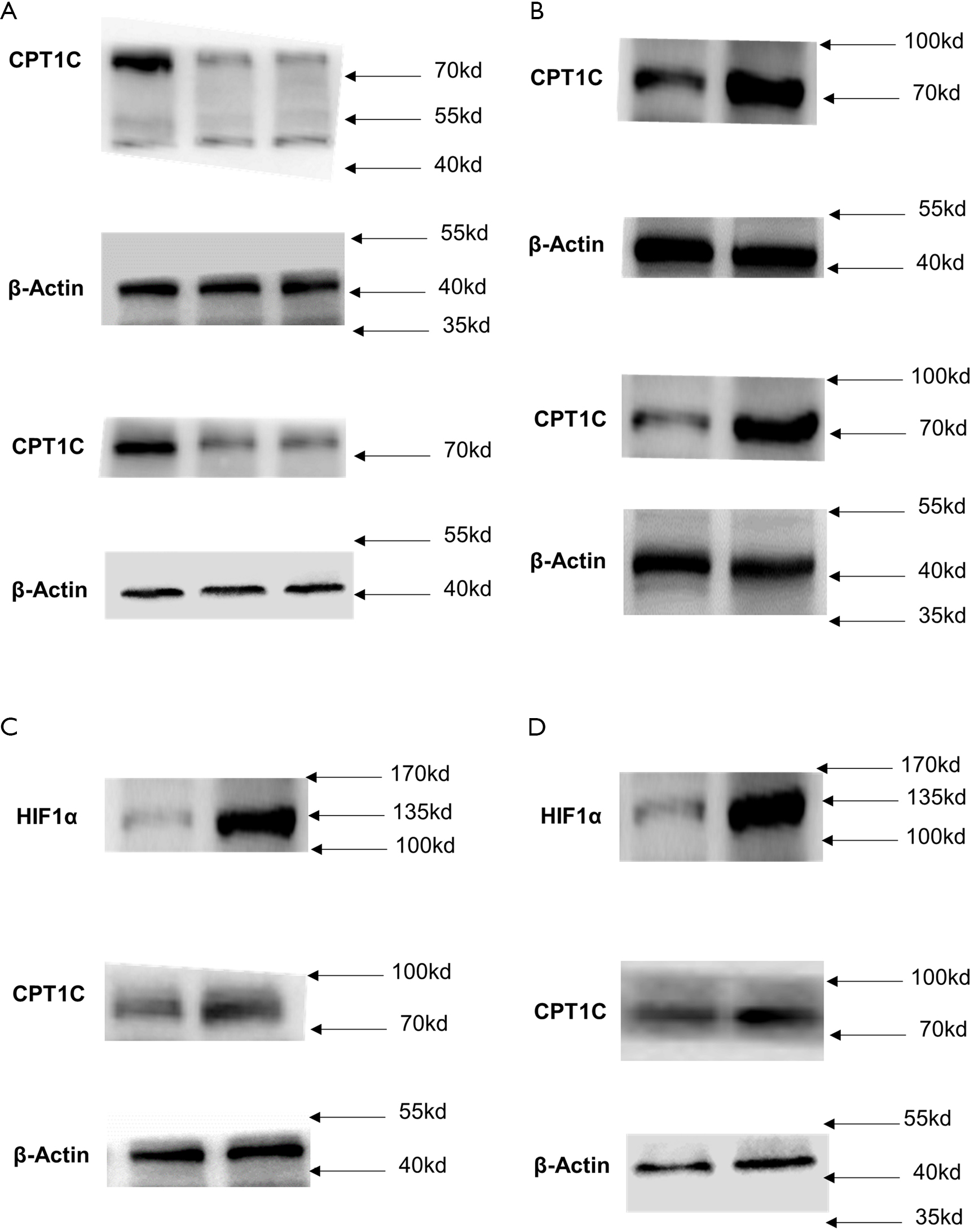 The past decades have witnessed a great progress in field of diagnosis and therapy of GC, the prognosis of GC patients was still very poor. Consequently, the underlying molecular feature contributing GC progression and the determination of potential treatment target are needed to improve the survival of GC patients. Recently, great efforts have been made to study the metabolic reprogramming of malignant cells, which has been verified to be associated with tumor progression (4-8). Enhanced process of FAO is one of the important metabolic feature of tumor cells, which links the Kreb’s cycle and produces ATP, NADPH, NADH, and FADH2. As metabolic stress caused by energy source scarcity is common in solid tumors, the energy production of FAO is extremely important for cancer cells. Thus, the role of FAO in promoting tumor progression is increasingly recognized. More and more studies have found that the dysregulation of FAO rate mediated by several critical enzymes will significantly influenced cell proliferation and metastasis (9-13).

CPT1A, CPT1B and CPT1C are three rare-limiting enzymes in FAO. To date, RNA sequencing has been widely used to identify effective target genes and TCGA database is currently the biggest public database. In this present study, we, for the first time investigated the prognostic role of CPT1A, CPT1B and CPT1C in GC based on TCGA and GEO databases and found that only CPT1C is a prognostic biomarker. Instead, CPT1A and CPT1B were not associated with survival. Limited previous studies have studied CPT1C in cancer and no previous studies investigated the prognostic role of CPT1C in GC. To date, though several previous studies have uncovered that CPT1C expression correlates inversely with mammalian target of rapamycin (mTOR) pathway activation, contributes to rapamycin resistance in murine primary tumors, and is frequently up-regulated in human lung tumors, limited studies focused on the prognostic value of CPT1C. A previous study analyzing >9,000 primary or metastatic tumor samples in TCGA dataset established a gene signature containing CPT1C that is strongly associated with epithelial-mesenchymal transition process (16). Thus, the CPT1C may have a prominent role in contributing tumor progression. Further, we silenced and enforced CPT1C expression to detect its oncogenic role in GC cells and verified that CPT1C will affect cell cycle and promote cell proliferation. In addition, hypoxia environment may exert up-regulating effect on CPT1C expression. Previous studies conducted in other cancer cells have found that high expression of CPT1C can strikingly accelerate tumor growth and even enhance cell viability under metabolic stress (17,18). Like previous report, we confirmed that CPT1C expression was positively associated with hypoxia (19) and we firstly verified that HIF1α will transcriptionally upregulate CPT1C expression.

In this present study, though we firstly revealed the prognostic and oncogenic role of CPT1C in GC, the prognostic effect of CPT1C was not validated in another independent cohort and future studies are needed to conducted to confirm the prognostic value of CPT1C in mRNA and protein level. We next focused our study on CPT1C, but we did not deny that CPT1A and CPT1B may also be able to impact cell function. Previous studies have found that these two enzymes can promote cell invasion and proliferation in different solid tumors including GC (8,20-22). We showed in our study that HIF1α can upregulate CPT1C expression in GC cells, however, the mechanism underlying this effect was not explored and whether HIF1α activate CPT1C expression by directly binding to its promoter region is not clear.

In conclusion, this is the first study to report that CPT1C mediated FAO plays an important role in GC. The present study provides new evidence supporting the prognostic and oncogenic role of CPT1C in the progression of GC and highlights that CPT1C may serve as a potential treatment target for GC patients.

We would like to acknowledge the editors and reviewers for the helpful comments on this paper.

Reporting Checklist: The authors have completed the STROBE reporting checklist. Available at http://dx.doi.org/10.21037/jgo-20-157

Conflicts of Interest: All authors have completed the ICMJE uniform disclosure form (available at: http://dx.doi.org/10.21037/jgo-20-157). The authors have no conflicts of interest to declare.

Ethical Statement: The authors are accountable for all aspects of the work in ensuring that questions related to the accuracy or integrity of any part of the work are appropriately investigated and resolved. The study was conducted in accordance with the Declaration of Helsinki (as revised in 2013). The study has been examined and approved by the Ethics Committee of the Pujiang People’s hospital (No. 04073-3-1711A). Informed consent was not available in this study for all the data of patients were derived from public TCGA and GEO databases.