Pancreatic cancer (PC) is one of the most lethal malignancies and is the seventh leading cause of cancer-related death worldwide, with approximately 432,242 related deaths in 2018 (1,2). So far, surgical resection remains the only potential curative treatment strategy, but the overall prognosis remains dismal for patients with resected PC, with an estimated 5-year overall survival (OS) of approximately 20% (3).

Lymph node (LN) status is considered an important prognostic factor for resected PC patients. Those with LN metastases have poor survival and higher risks of disease recurrence (4). Therefore, sufficient lymphadenectomy may play an important role in improving the survival of resected PC patients. Recently, the number of examined lymph nodes (ELNs) was found to reflect survival after resection of PC; that is, patients with more ELNs had better prognosis (5-11). However, the minimum number of ELN to be resected remains controversial and varies from 12 to 15 in different guidelines (6,12,13). Moreover, the optimal number of ELNs to adequately stratify survival has not yet been established.

In the current literature, most of the data about the number of ELNs are limited to resection of the entire pancreas or the pancreatic head, and few studies have considered the relationship between ELN count and survival in patients with pancreatic body/tail ductal adenocarcinoma. Therefore, we performed a population-based retrospective analysis based on the Surveillance, Epidemiology, and End Results (SEER) database to investigate the prognostic value of ELN count for LN-negative pancreatic body/tail ductal adenocarcinoma. We present the following article in accordance with the STROBE reporting checklist (available at http://dx.doi.org/10.21037/jgo-20-158).

The SEER database is a program of the National Cancer Institute that has been updated annually since 1973 and accounts for approximately 30% of the United States’ population. The present study cohort was derived from the database using SEER*Stat software (version 8.3.6). Patients diagnosed between 2004 and 2015 who underwent surgery of the primary tumor were included. Records were retrieved according to the International Classification of Disease for Oncology (3rd edition) (ICD-O-3) code for the pancreas (C25.0–C25.9). Only patients with positive histological confirmation of primary pancreatic adenocarcinoma or infiltrating ductal carcinoma (ICD-O-3 histology/behavior code 8500/3 or 8140/3) located in the body/tail of the pancreas with pathologically negative LNs were involved. Patients were excluded if they had distant metastasis, unknown TNM information, or incomplete follow-up data. The study was conducted in accordance with the Declaration of Helsinki (as revised in 2013). Institutional review board approval and informed consent were not required because the SEER database is publicly available, and the patient information is anonymous.

The following information was exacted from the SEER database: year at diagnosis, age at diagnosis, sex, race, marital status, histologic grade, TNM information, the number of ELNs, radiotherapy, chemotherapy, survival, and follow-up. Patients were reviewed and restaged according to the 8th edition of the American Joint Committee on Cancer staging system (13). ELN count was abstracted according to the total number of ELNs. Only patients with one or more LN examined were included. Patients with an unknown number of ELNs were also excluded. OS was defined as the time from diagnosis to death from any cause. Patients still alive were censored. Cancer-specific survival (CSS) was defined as the time from diagnosis to death from PC. Patients still alive or who died from other causes were censored. The last follow-up in the present study was on 31 December 2016.

X-tile software (version 3.6.1) was used to determine the optimal cutoff number of ELNs (14). Survival curves were created using the Kaplan-Meier method, and differences between the curves were compared by the log-rank test. Cox proportional hazards regression models were used to assess potential risk factors for survival outcomes. Risk factors with a P value <0.1 in the univariable analysis were entered into the multivariable analysis. The hazard ratio (HR) and 95% confidence interval (CI) were calculated. All P values were two-tailed, and P<0.05 was considered statistically significant. All statistical analyses were performed using SPSS for Windows, version 19 (SPSS Inc., Chicago, IL, USA).

A total of 700 pancreatic body/tail ductal adenocarcinoma patients who underwent resection between 2004 and 2015 were enrolled in the present study cohort. Their clinicopathologic features are shown in Table 1. The median age at diagnosis was 67 [interquartile range (IQR): 60–75] years, and 363 (51.9%) patients were female. The median number of ELNs was 11 (IQR: 5–16). The ELN distribution of the entire cohort is shown in Figure 1, and exact number of patients in ELN column is shown in Table S1. 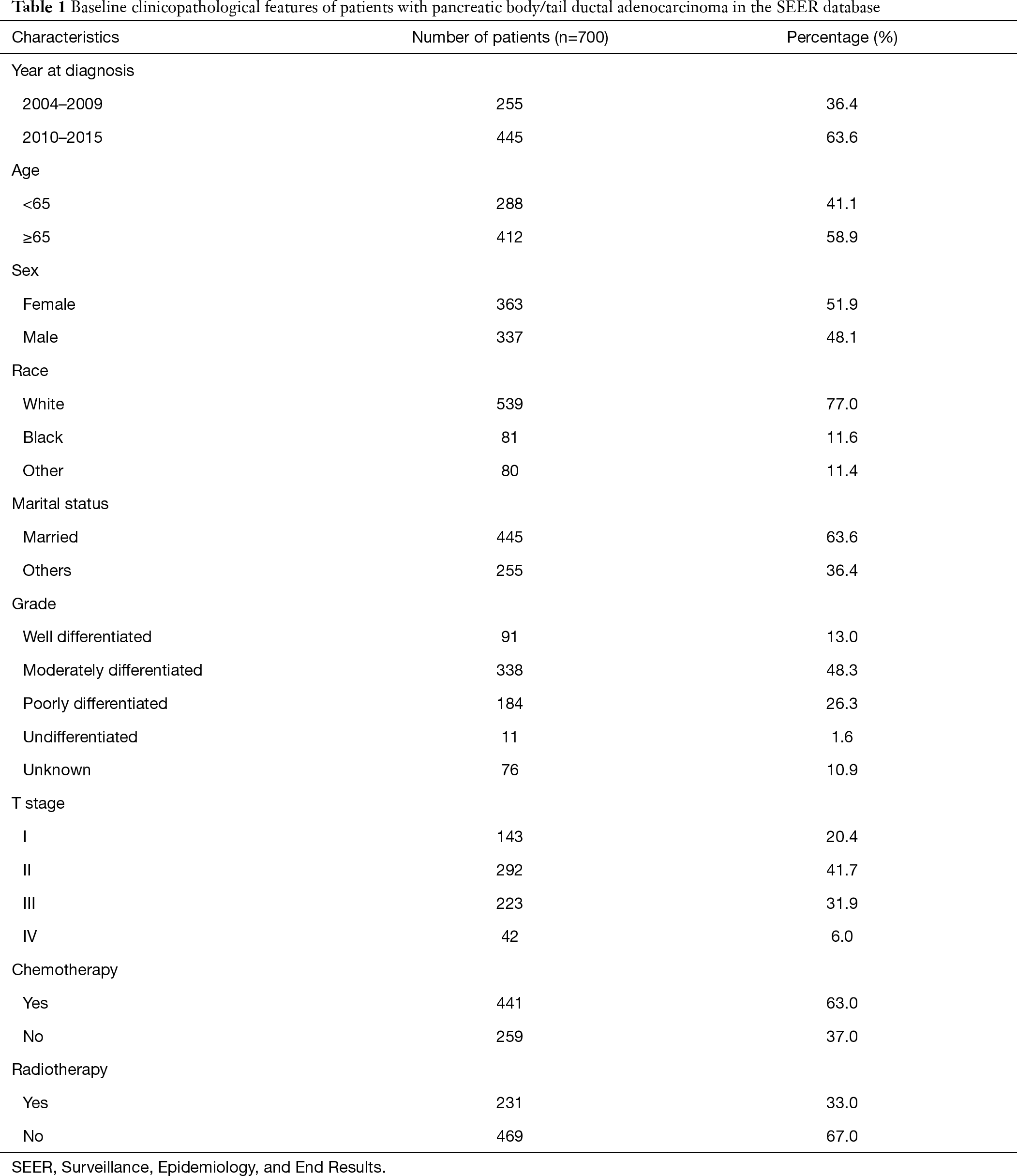 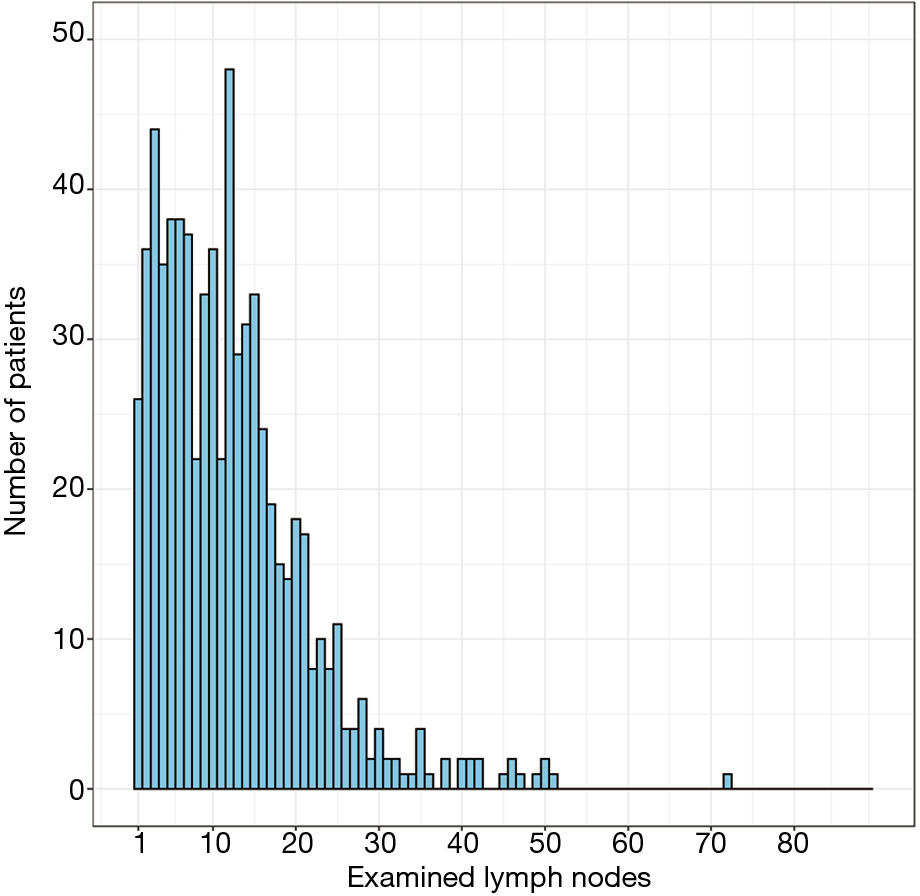 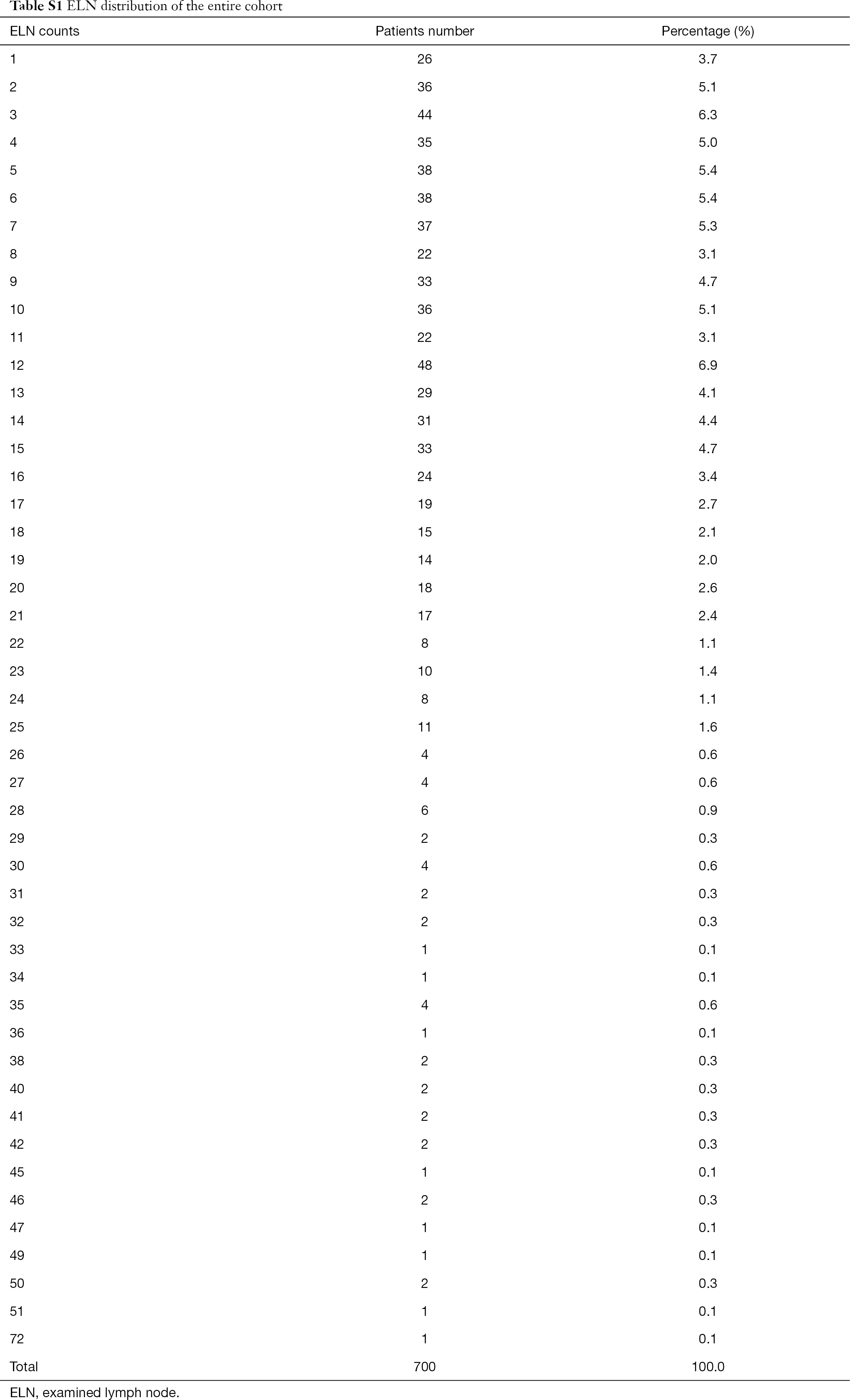 Identification of the optimal cutoff value for ELN count

X-tile analysis to identify the cutoff for the optimal number of ELNs revealed 14 as the optimal cutoff for both OS and CSS (Figure S1). Kaplan-Meier survival analysis showed that patients with ELNs >14 had better OS and CSS than those with ELNs ≤14 (Figure 3). Multivariate Cox analysis was performed after adjusting for available variables, and ELNs ≤14 was found to be an independent risk factor for both OS (HR, 1.357; 95% CI, 1.080–1.704; P=0.009) and CSS (HR, 1.394; 95% CI, 1.092–1.778; P=0.008) (Tables 2,3). Other independent prognostic factors identified in both the OS and CSS multivariate analyses included histologic grade, T stage, and receipt of chemotherapy. 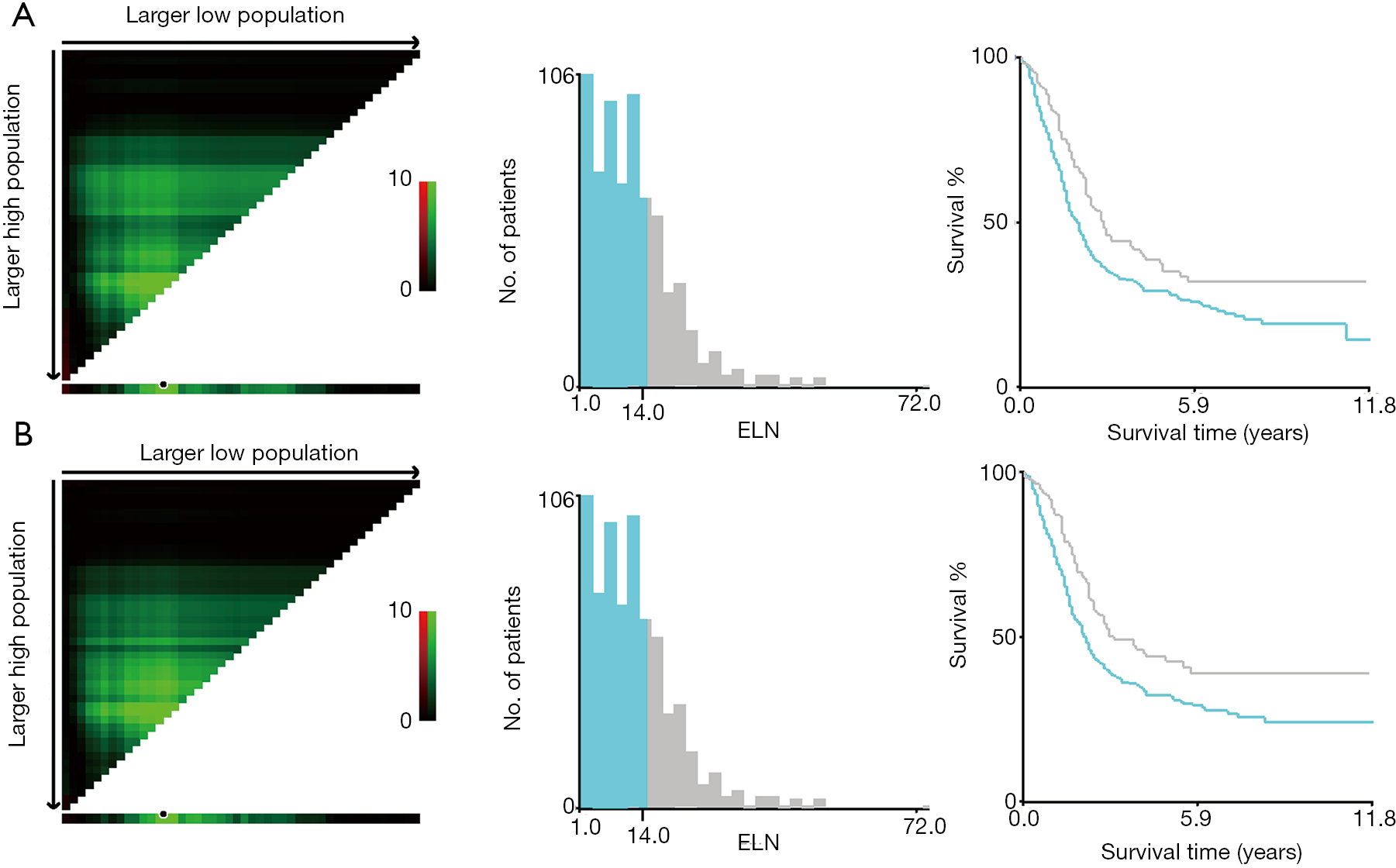 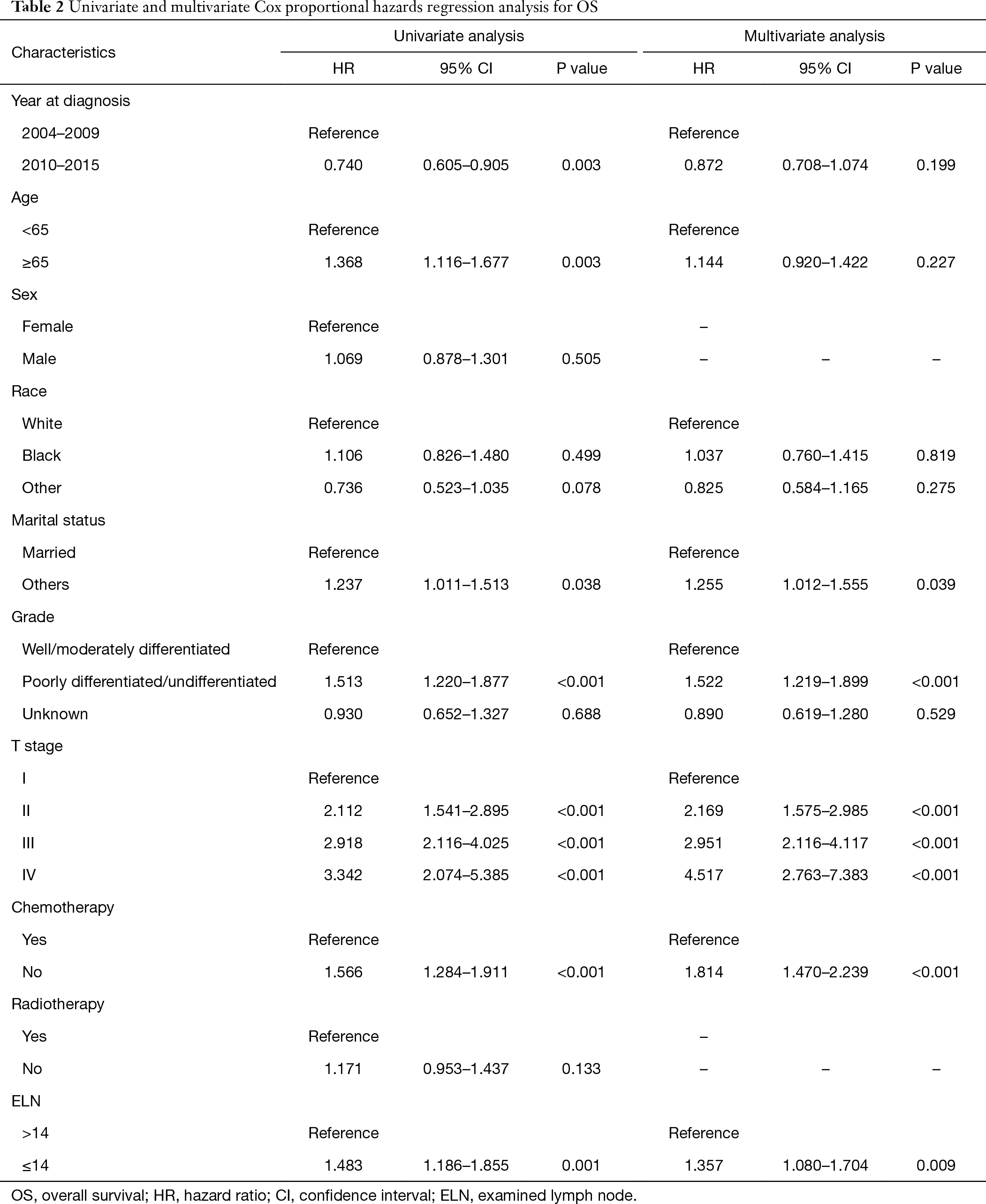 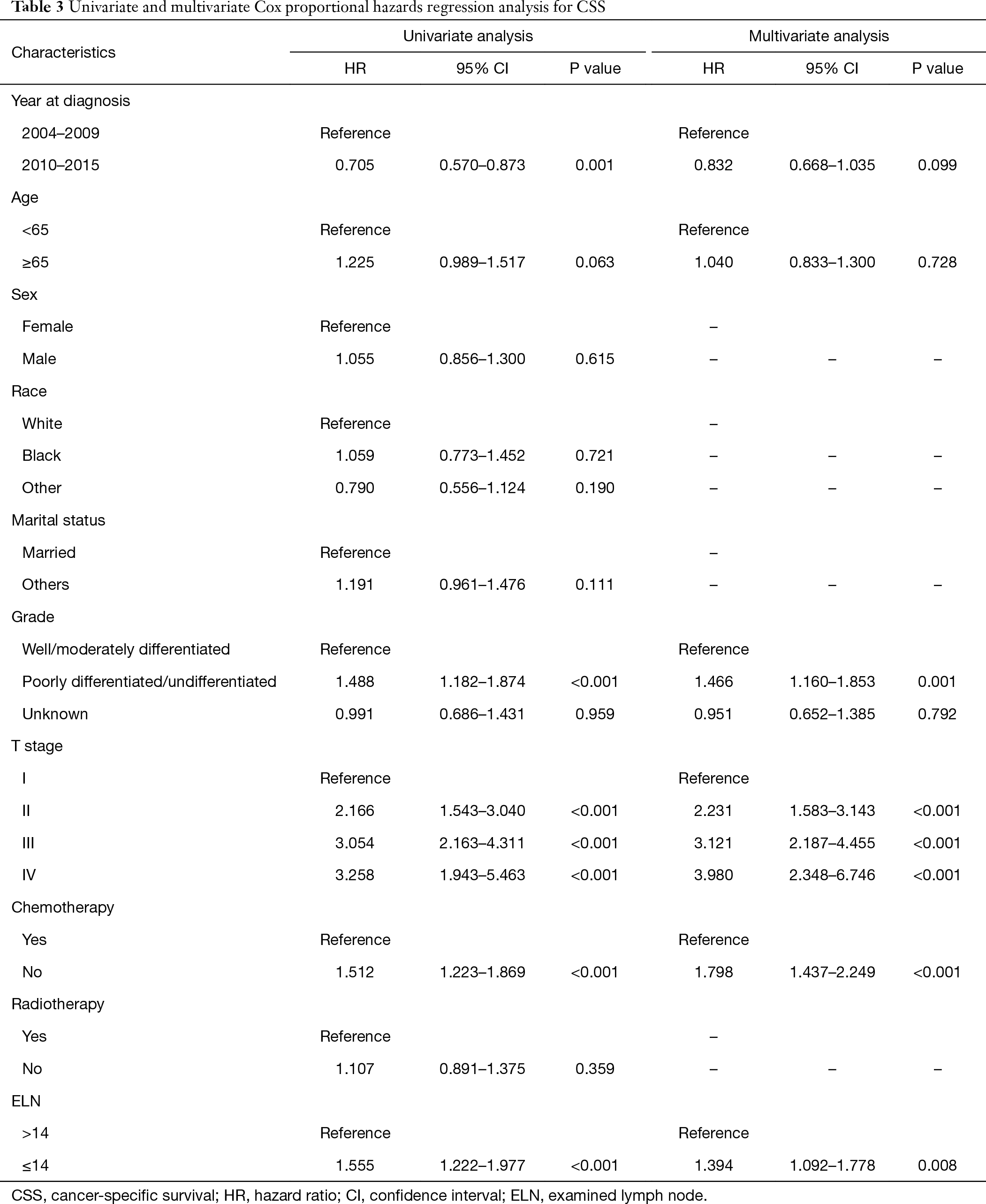 LN metastasis is regarded as an important prognostic factor in cancer survival. Cancer patients with LN metastasis have a poorer prognosis and higher risk of recurrence after surgical resection. Complete lymphadenectomy plays an important role in precise nodal staging and the appropriate delivery of adjuvant therapies. The number of ELNs is a well-known determinant factor for nodal staging. Previous studies have found that the number of ELNs has a close relationship with survival in PC (5-11). Patients with a higher number of ELNs might have better survival, especially in node-negative disease. Huebner et al. reported that pancreaticoduodenectomy patients with >11 ELNs had better OS compared with those with <11 ELNs (HR, 1.33, 95% CI, 1.1–1.7; P=0.001) (5). Slidell et al. reported that patients undergoing pancreatectomy for pancreatic adenocarcinoma should have at least 12 LNs evaluated (7). A recent analysis from the Netherlands suggested 11 ELNs as the minimum and 19 ELNs as the optimal cutoff points for evaluating the quality of LN examination and possibly for stratifying postoperative prognosis (8). Based on these studies, the number of ELNs needed to be resected varies in different guidelines. The American Joint Committee on Cancer and Union for International Cancer Control recommends a minimum of 12 LNs to be analyzed for nodal staging in PC (13). In contrast, the European Society for Medical Oncology recommends removal of at least 15 LNs to obtain adequate staging (12). Moreover, the National Comprehensive Cancer Network has not suggested an optimal number of ELNs for PC.

Most PCs are located in the head of the pancreas, and only 20–25% in the body/tail (15). Tumor biology (16,17), as well as surgical strategy, differs between the PC of the head and that of the body/tail. The resection of the head of the pancreas usually involves a pancreaticoduodenectomy, whereas resection of the body/tail involves a distal pancreatectomy (18,19). However, for pancreatic body/tail ductal adenocarcinoma, the optimal number of ELNs remains undetermined. Only two studies in the current literature have focused on this issue. Ashfaq et al. (9) found that 11 was the optimal ELN count for pancreatic adenocarcinoma patients undergoing distal pancreatectomy. Patients with 1–10 ELNs had a worse survival than those with >10 ELNs. Another study conducted by Malleo et al. in a series of 240 patients with pancreatic body/tail ductal adenocarcinoma found the optimal ELN count was 20, and this was an independent prognostic factor in LN-negative patients (20).

In this study, we used the SEER database to explore the relationship between ELNs and survival in LN-negative pancreatic body/tail ductal adenocarcinoma. We found ELN was an independent prognostic factor for LN-negative pancreatic body/tail cancer patients. Moreover, we recommend that the number of ELNs should be >14 for these patients, which is compatible with the findings of previous studies.

The correlation of increased ELN count and improved survival can be explained by several potential reasons. First, a higher number of ELNs is associated with improved detection of positive LNs and more accurate staging. Patients with an inadequate number of ELNs and diagnosed node-negative may be node-positive. Second, more positive LNs will be detected with increasing ELN count, and a node-positive diagnosis will affect the delivery of adjuvant therapy after resection, which may improve survival. Third, more dissection of LNs may reflect the quality of surgery and pathological examination. A previous study has indicated that high-volume medical centers have higher ELN counts and better survival (21). However, another key issue requires attention: the role of extended lymphadenectomy. The extent of lymphadenectomy needs to be considered against the risks of potential postoperative complications (3). Several previous studies have shown no survival difference between extended lymphadenectomy and standard lymphadenectomy (22-26). Therefore, more prospective studies need to focus on the extent of lymphadenectomy with the optimal number of ELNs.

There are several study limitations that should be mentioned. First, we could not avoid some bias because of the retrospective nature of the study. Second, the LNs removed and counted may have varied among different institutions in the SEER program. The number of ELNs depends on both the extent of the surgeon’s lymphadenectomy and the pathologist’s examination (27). Moreover, LN station and location could not be analyzed. Third, detailed information on surgery, margin status, postoperative complications, and recurrence status, as well as the receipt of systemic therapy, could not be assessed from the SEER database. We could not analyze the relationship between recurrence and ELN count. Moreover, for some patients (especially T4N0), surgery may not require the first standard treatment according to present guidelines, and they may have received neoadjuvant treatment or palliative surgical treatment, which could result in insufficient or absent nodal sampling and positive surgical margins, leading to inaccurate ELN count. Because of these inherent limitations, further prospective studies are required to confirm our findings.

Our study revealed that ELN count was an independent prognostic factor for patients with LN-negative pancreatic body/tail ductal adenocarcinoma. More than 14 ELNs are recommended for accurate nodal staging in these patients. Further prospective research is required to confirm our findings.

Funding: This work was supported by the National Natural Science Foundation of China (Nos. 81572307 and 81773096) and the Major Project of Medical and Health Technology Development Program in Zhejiang Province (No. 7211902).

Reporting Checklist: The authors have completed the STROBE reporting checklist. Available at: http://dx.doi.org/10.21037/jgo-20-158

Conflicts of Interest: All authors have completed the ICMJE uniform disclosure form (available at http://dx.doi.org/10.21037/jgo-20-158). The authors have no conflicts of interest to declare.

Ethical Statement: The authors are accountable for all aspects of the work in ensuring that questions related to the accuracy or integrity of any part of the work are appropriately investigated and resolved. The study was conducted in accordance with the Declaration of Helsinki (as revised in 2013). Institutional review board approval and informed consent were not required because the SEER database is publicly available and the patient information is anonymous.