In the United States this year, the American Cancer Society projects an estimated 21,600 new diagnoses of gastric adenocarcinoma (GAC) and 10,990 deaths caused by the disease. Although overall incidence has declined over the years, the relative 5-year survival rate remains below 30% (1,2).

Surgical resection remains a prerequisite for curative treatment of localized gastric cancer, but prognosis remains poor due to high risk of both locoregional and distant recurrence (3,4). Since 2001, two landmark randomized controlled trials have demonstrated a survival benefit for adjuvant therapy over surgery alone. The Intergroup 0116 (INT-0116) trial demonstrated that adjuvant chemoradiotherapy (aCRT) after resection significantly improves relapse-free survival (RFS) and overall survival (OS). Limitations of the INT-0116 trial, however, include treatment noncompliance due to significant grade 3 and 4 toxic effects and lack of standardized surgical procedure in most cases. D2 lymph node dissection was recommended but only performed in 10% of cases—likely contributing to the inferior survival in the surgery alone arm (5). An updated report of the INT-0116 trial in 2012 showed that the aCRT arm had an absolute 10-year OS benefit of 10% relative to the control arm providing the study with the added strength of long follow-up (6). The Medical Research Council Adjuvant Gastric Infusional Chemotherapy (MAGIC) study demonstrated that a perioperative chemotherapy (PC) regimen of epirubicin, cisplatin, fluorouracil (ECF) decreased tumor size and stage and significantly improved OS following resection. The MAGIC trial was limited in that only 42% completed all six courses of pre- and post-operative chemotherapy due to early progressive disease or death, patient’s request, and postoperative complications. Additionally, the study was unable to attribute the favorable outcome to either preoperative or postoperative chemotherapy (7).

In addition to aCRT and PC, studies have also explored treating GAC with adjuvant chemotherapy alone. The Japanese ACTS-GC demonstrated a 33% improvement in OS for patients receiving 1 year of postoperative adjuvant S-1 (8). The CLASSIC study in South Korean, Japanese, and Taiwanese patients showed a 44% improvement in disease-free survival (DFS) for patients treated with postoperative capecitabine and oxaliplatin compared to observation (9). These large randomized trials have established adjuvant chemotherapy alone, either with S-1 or capecitabine/oxaliplatin, following D2 gastrectomy as standards of care in Asian countries. In the Western countries, the debate continues to focus on the use of postoperative chemoradiation vs. PC (8). Not only do the Asian studies highlight the more widespread D0 and D1 dissections in the United States, but the epidemiologic and prognostic differences in GAC between Asian and Western populations limit the application of the Asian trials to Western patient populations.

With the INT-0116 study only including patients with an R0 resection and adequate postoperative recovery and the MAGIC study including all patients who were eligible for curative surgery, the studies are difficult to compare with regards to treatment adherence and survival. These studies stress the obstacles encountered when determining an optimal treatment for GAC. In an effort to examine how the largest aCRT and PC trials have influenced practices at our institution and how adjuvant therapy impacts recurrence patterns and survival, we performed a retrospective review of all patients treated for GAC at Emory University Hospital from 2000-2013.

A prospectively-maintained institutional database was used to identify 150 patients with GAC who had resection with curative intent between December 2000 and June 2013 at Emory University in Atlanta, Georgia. Patients who underwent palliative resection of advanced metastatic disease were excluded from this analysis. Staging is reported per the 7th edition of the American Joint Commission on Cancer (AJCC) Cancer Staging Manual.

In order to examine whether patterns of care have shifted since the MAGIC trial, patients were further divided into two cohorts depending on the years they were treated at Emory. The Early cohort included patients treated from 2000-2006, and the Late cohort included patients treated from 2007-2013. These two cohorts were examined for demographic and clinicopathologic variations and also examined for changes in patterns of care at Emory University since 2000.

Data analysis was conducted with Statistical Package for the Social Sciences 19.0 software (IBM Inc., Armonk, USA). The clinicopathologic features of the two cohorts were assessed by the chi-square test for categorical variables and the t-test for continuous variables. Kaplan-Meier log-rank survival analysis was performed to evaluate association of the two cohorts with patient survival. Statistical significance was defined as P<0.05. 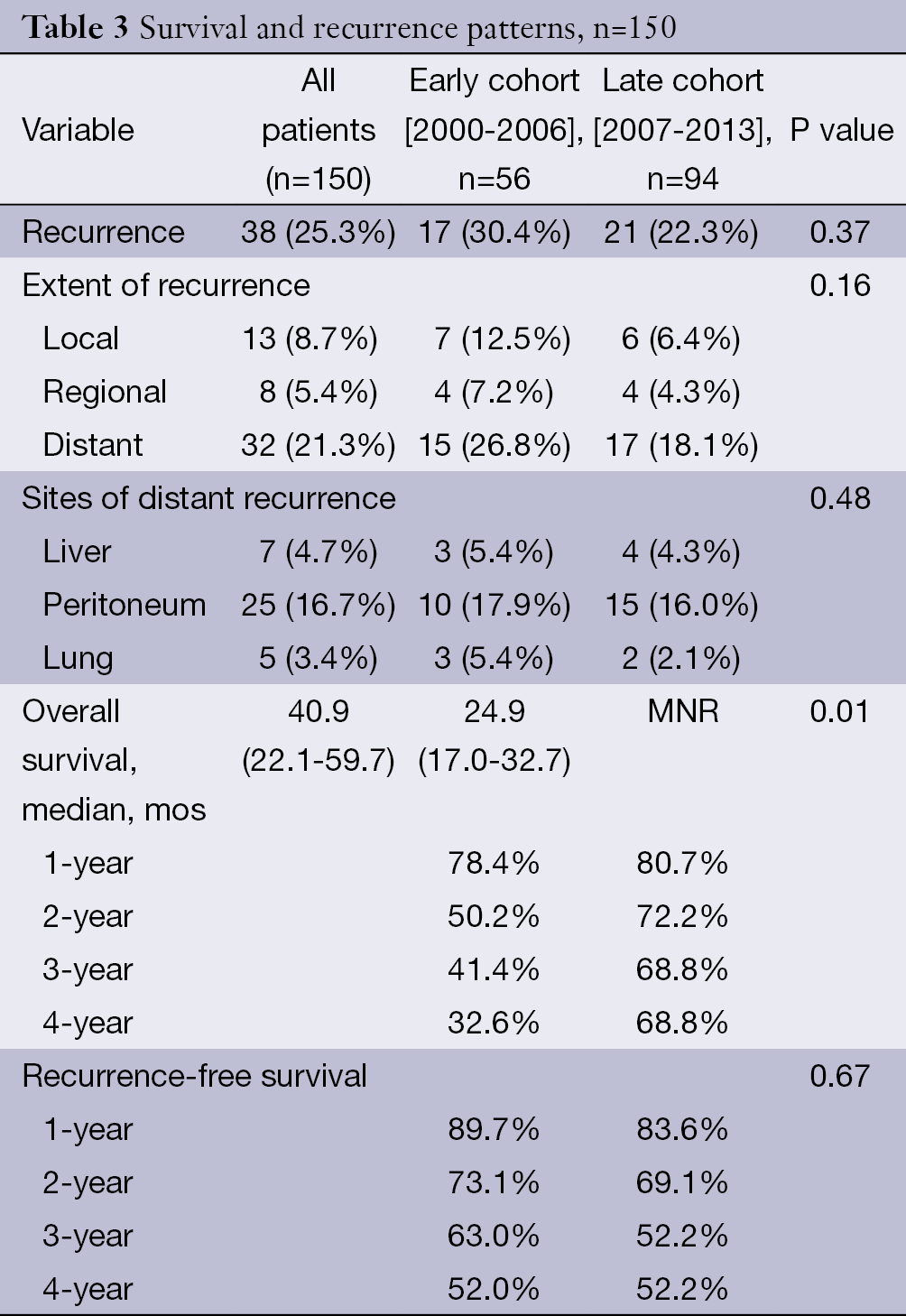 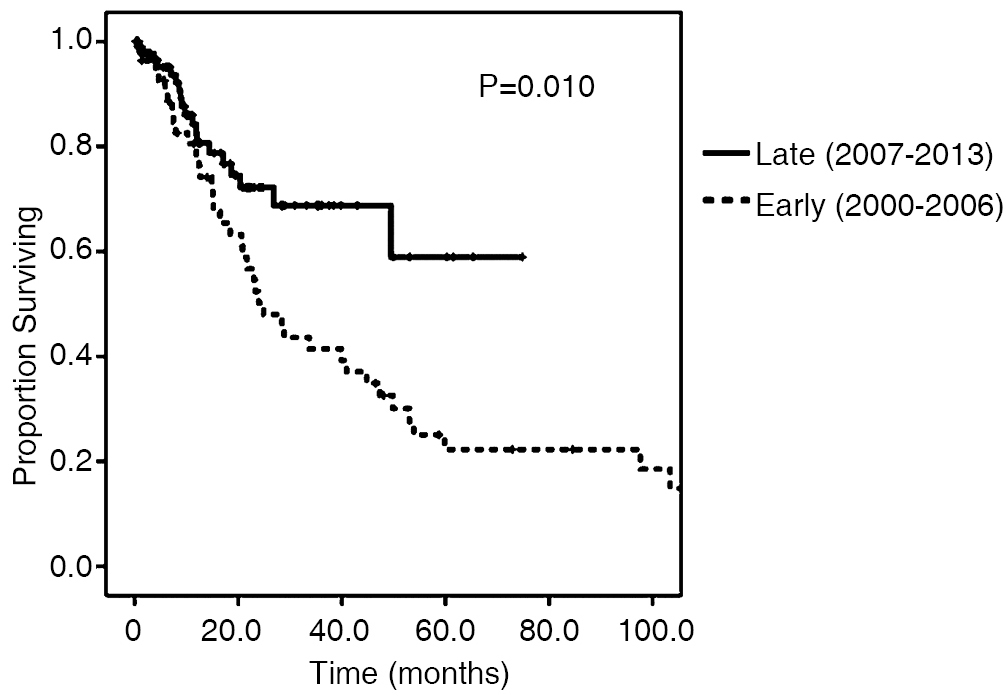 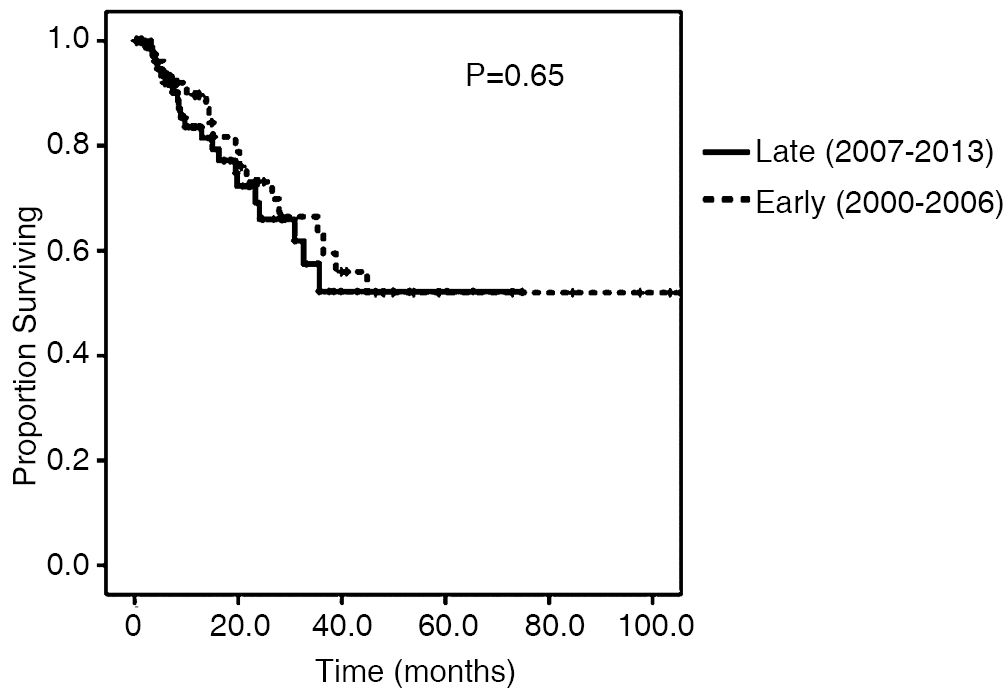 Distant failure was the most common site of first recurrence (32 patients, 21.3%). There were a total of 13 local failures (8.7%) and 8 regional failures (5.4%). There was no significant difference in the rate of local, regional, or distant recurrence between the Early and Late cohorts (P=0.16, Table 3).

Given the multitude of evidence-based trials influencing new practices and redefining the standards of care for GAC patients, a retrospective analysis of patients treated at Emory University provides the opportunity to evaluate changes in our patterns of treatment and the effect of these changes on patient outcomes. Our analysis reveals that the use of PC has increased significantly since the publication of the MAGIC trial while the use of aCRT has remained relatively stable. Over the same time period, OS for all patients treated for GAC has improved, but recurrence rates have remained stable. This adoption of PC into clinical practice is well-supported by the MAGIC trial, but an approach using aCRT similar to that studied in the Intergroup trial remains supported as well. Given the lack of randomized comparisons between these two competing treatment paradigms, the question of optimal treatment strategy remains open.

The reasons guiding the choice of PC over aCRT at our institution remain unclear. Most clinicopathologic features and patient demographics considered in the study were similar between the Early and Late cohorts. We did observe significant differences between the two cohorts with regards to mean BMI, cardiac disease, D2 lymph node dissection, and tumor size. A BMI greater than 25 kg/m2 may be a predictor of increased postoperative complications, but it has not been demonstrated to be a predictor of OS in gastric cancer (10). The reduced tumor size seen in the Late cohort may be a result of earlier detection, increased use of neoadjuvant chemotherapy, or a combination of both. Small tumor size has been shown to be a good prognostic factor in patients with gastric cancer (11,12). It is possible that the increased prevalence of PC and the consequent reduction in average tumor size could contribute to the improved OS of the Late cohort.

Along with a decrease in tumor size, our study demonstrates a dramatic rise in patients receiving D2 lymph node dissection. A study of GAC patients in the Surveillance Epidemiology and End Results (SEER) database, showed that patients who had more than 15 or 20 nodes examined had improved long-term survival outcomes (13). D2 lymphadenectomy has been part of standard surgical management of resectable GAC in Asia, and has become the standard of care United States as well, as seen in our Late cohort (14,15). Less extensive lymphadenectomy may result in increased loco-regional recurrence and understaging of patients. A retrospective study analyzing data from the Netherlands Cancer Registry showed that in their data, more extensive nodal dissection has become more common and that, combined with increased use of neoadjuvant chemotherapy, increased nodal clearance has been seen (16). The benefits of D2 lymphadenectomy and its correlation with OS need to be examined on a larger scale, but increased rates of D2 dissection may have contributed to the increased OS seen in our Late cohort.

The increase in the use of PC at our institution has come at the expense of aCRT. Choice of PC over aCRT may be guided by multiple factors, including the potential for surgical downstaging possibly afforded by neoadjuvant chemotherapy, concern for toxicity associated with aCRT, and referral patterns. PC is not without drawbacks, however, including the significant toxicity of the ECF regimen as well as poor compliance with both the neoadjuvant and the adjuvant portion of chemotherapy. In the MAGIC trial, only 41.6% of patients completed all planned cycles of chemotherapy (7). Results of a retrospective study from the Netherlands demonstrated no significant change in the percentage of patients receiving PC despite a Dutch evidence-based recommendation for PC with ECF released in 2009. Their analysis showed 10% of patients discontinued preoperative cycles and 50% discontinued postoperative cycles. Severe toxicity (≥ grade 3) was observed in 34% of those undergoing at least the preoperative chemotherapy and 50% in those receiving postoperative chemotherapy (16). Grades III and IV toxicities observed during the neoadjuvant phase have been identified as an independent predictor of post-operative mortality, suggesting poor tolerance increases patient risk (17). The potential toxicity profile of PC, particularly the neoadjuvant component, should be considered when deciding on a treatment strategy for GAC.

Although the median OS has not been reached for the Late cohort, the 4-year OS shows very encouraging data with 68.8% of the patients in the Late cohort surviving compared to the 32.6% patients in the Early cohort. This may be due to a variety of reasons including more extensive lymph node dissection, rise in PC resulting in smaller primary tumors at time of surgery, and more variety in chemoradiotherapy regimens.

The overall recurrence rate, as well as the rates of local, regional, and distant failure has remained stable between the Early and Late cohorts, suggesting that the adoption of more extensive lymph node dissections and PC have not changed recurrence patterns. This suggests that our patients may be receiving better supportive care throughout their treatments or due to improved staging procedures, patients with worse prognoses and metastatic disease at presentation are not being treated with these standard approaches. Future studies may reveal which patients may benefit from PC vs. aCRT and may lead to more personalized treatment approaches. Studies are already underway to uncover biomarkers that may be used to select the optimal treatment approach to improve survival and decrease recurrence for individual patients.

Our analysis does carry some important limitations. The retrospective design of the study limits the quality and completeness of the data set and introduces the potential for bias. Our data lacks information regarding PC compliance, as many patients received all or part of their chemotherapy at outside institutions. Given the marginal compliance with the PC regimen reported by the Dutch and the original MAGIC study group, it remains important to understand how well our patients are able to comply with the PC regimen. Furthermore, we lack comprehensive data about treatment-related mortality and toxicity, which would have aided us in interpreting survival differences between our Early and Late cohort.

The results of a few major adjuvant therapy trials have changed the standard of care in the US for resectable GAC. As evidence of the benefits of D2 lymph node dissection and PC continue to emerge, the standard of care for Emory patients will continue to evolve. A recent RTOG trial has introduced a regimen of neoadjuvant chemotherapy followed by neoadjuvant chemoradiation, which yielded a substantial pathologic response rate and increased the possibility both of D2 lymphadenectomy and R0 resection in patients treated per this protocol (18). These studies indicate the complexity of treatment approaches and the evolving role of radiotherapy. The optimal regimen for patients has not been established, but our next step in treating GAC patients is to determine how radiotherapy and chemotherapy can best complement curative intent resection. As we begin to redefine treatment for GAC patients and integrate different treatment modalities, we hope to continue to improve the OS of our patients and lower recurrence rates.

Funding: This work was supported by the National Center for Advancing Translational Sciences of the National Institutes of Health under Award Numbers ULl TR000454 to LEC and SBF and TLlTR000456 to LEC.