Hepatopancreatic resections constitute a field of surgery prone to complications (1-3). These procedures demand high acuity from the surgeons, as well as from the entire process, from administration to discharge and during the following weeks. Benefits of high annual center and surgeon volume have led to centralization of major surgical operations to achieve the best possible results (2,4,5).

The Postoperative morbidity index (PMI) is a quantitative severity weighting system; it uses the modified Accordion Severity System (MASGS) to grade the severity of complications gathered from American College of Surgeons National Surgical Quality Improvement Program (ACS-NSQIP) complication data, and then weights each complication (6). This quantitative measure was first applied to several surgical procedures such as appendectomy, laparoscopic colectomy, and hepatectomy in 2011 (7), and to distal pancreatectomies in 2013 (8). In 2015, a quantitative benchmark for morbidity in pancreaticoduodenectomy (PD) was established using PMI (1), and the complication burden of 64 total pancreatectomies was described using the same methods (9). The established scoring system enables the assessment and comparison of surgical results between institutions, highlights targets for improvement, and may further determine benchmark complication cut-offs for results to be achieved (1,2).

Pancreatic and hepatic surgery, especially major procedures including PD (1) or major (≥3 segments) resection, carry high complication burden even in low-risk patients (1-3,10). Distal pancreatic resection and minor (≤2 segments) hepatic resection are less prone to severe complication (3). There is high variability in the number of complications and survival between the best and worst performing major surgical hospitals (1-3), indicating the need for routine quantitative benchmarking in all hospitals in which major surgery is performed in order to improve performance and reduce variation in outcomes.

The aim of this study was to compare different hepatopancreatic procedures by means of a quantitative scoring system in a medium-volume center. The complication profile and burden were compared with benchmark studies published earlier (1,2,9). The secondary aim was to critically evaluate the rationale of major surgery performed in our center and targets for improvement.

This was a retrospective cohort study. Included patients had received either pancreatic or liver resection in 2000–2017 at Central Finland Central Hospital. Data about complications were collected prospectively and re-reviewed retrospectively by another researcher. The histopathological diagnoses included mainly malignant diseases, such as ductal adenocarcinoma of pancreas, colorectal liver metastases, and hepatocellular carcinoma. 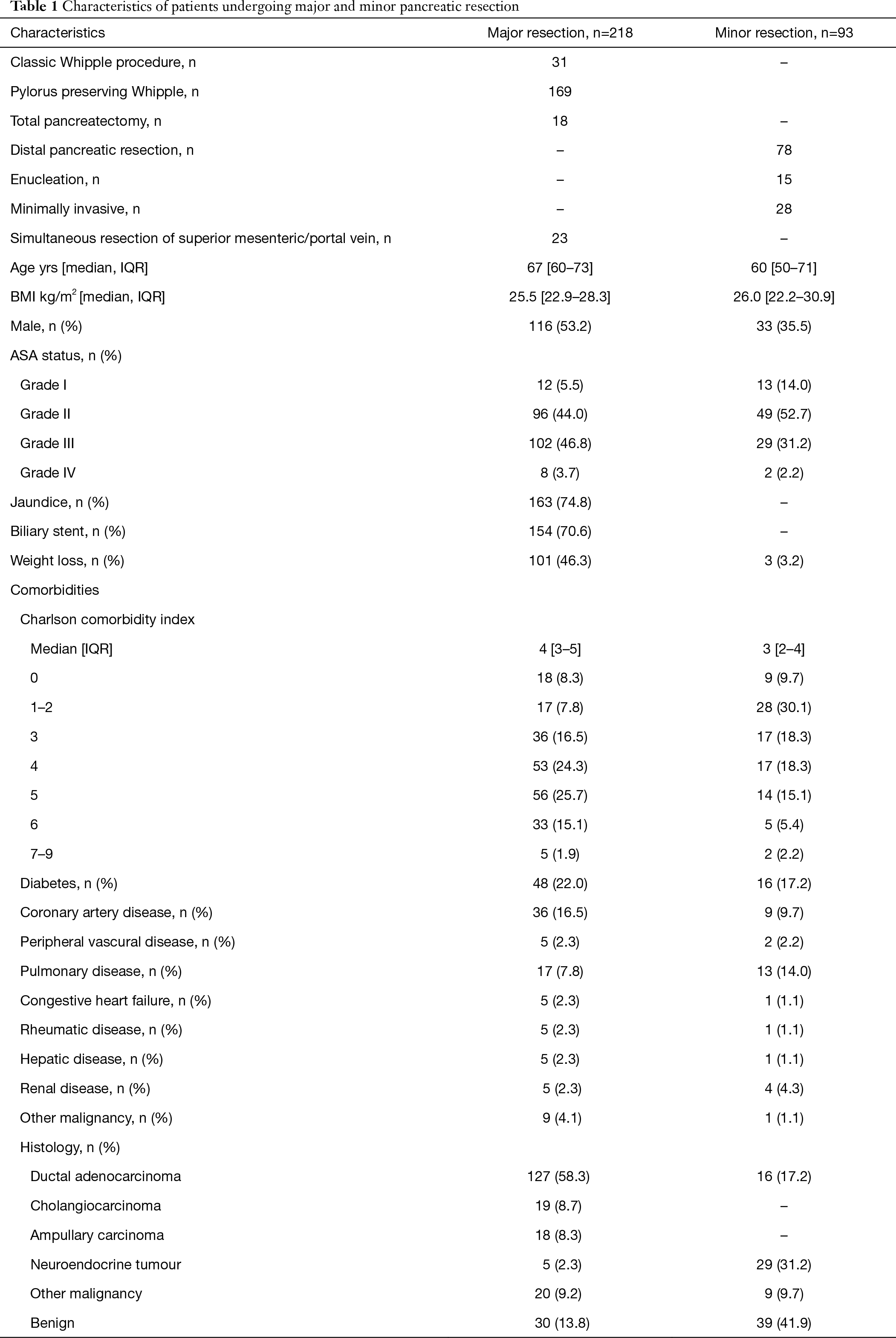 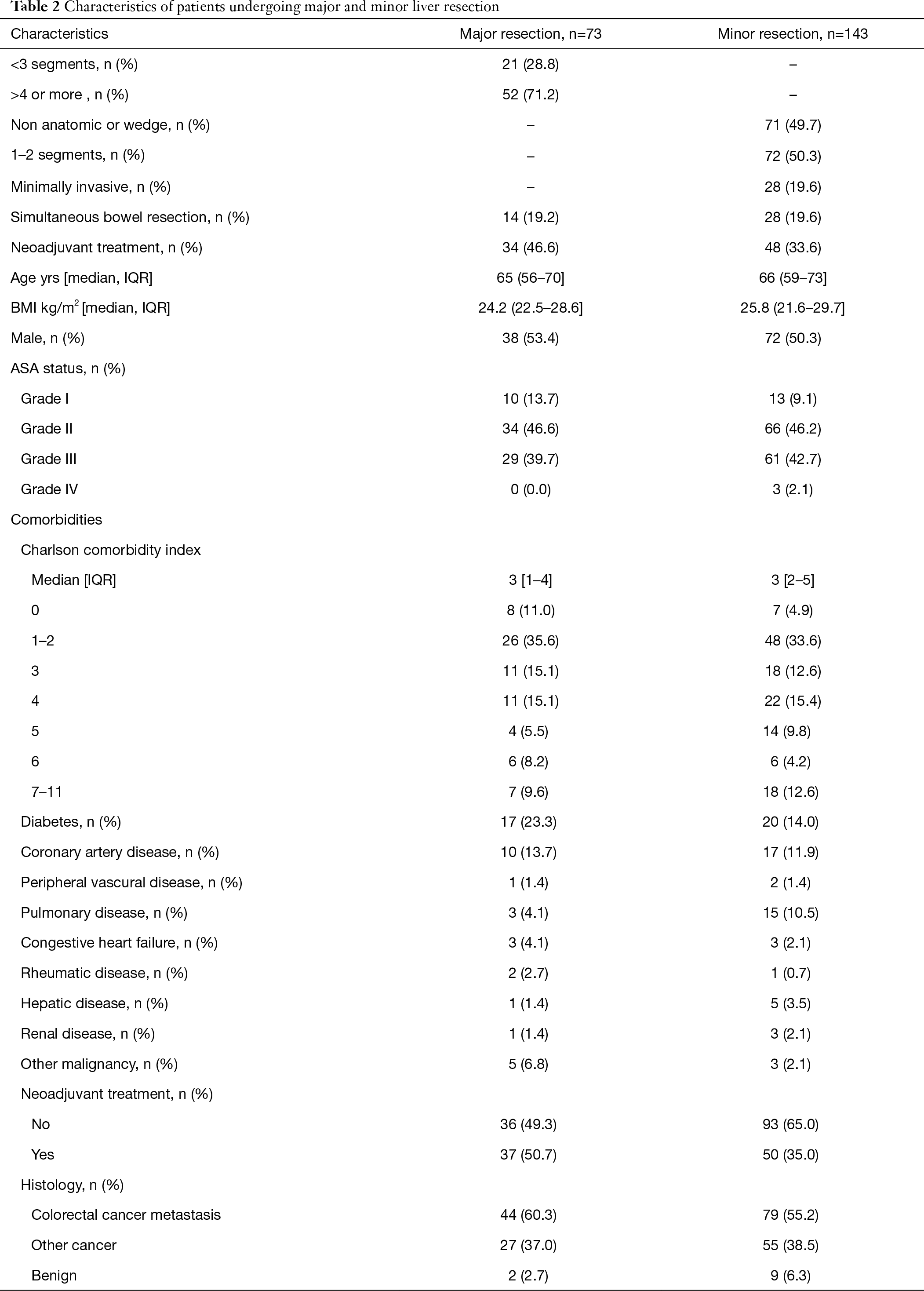 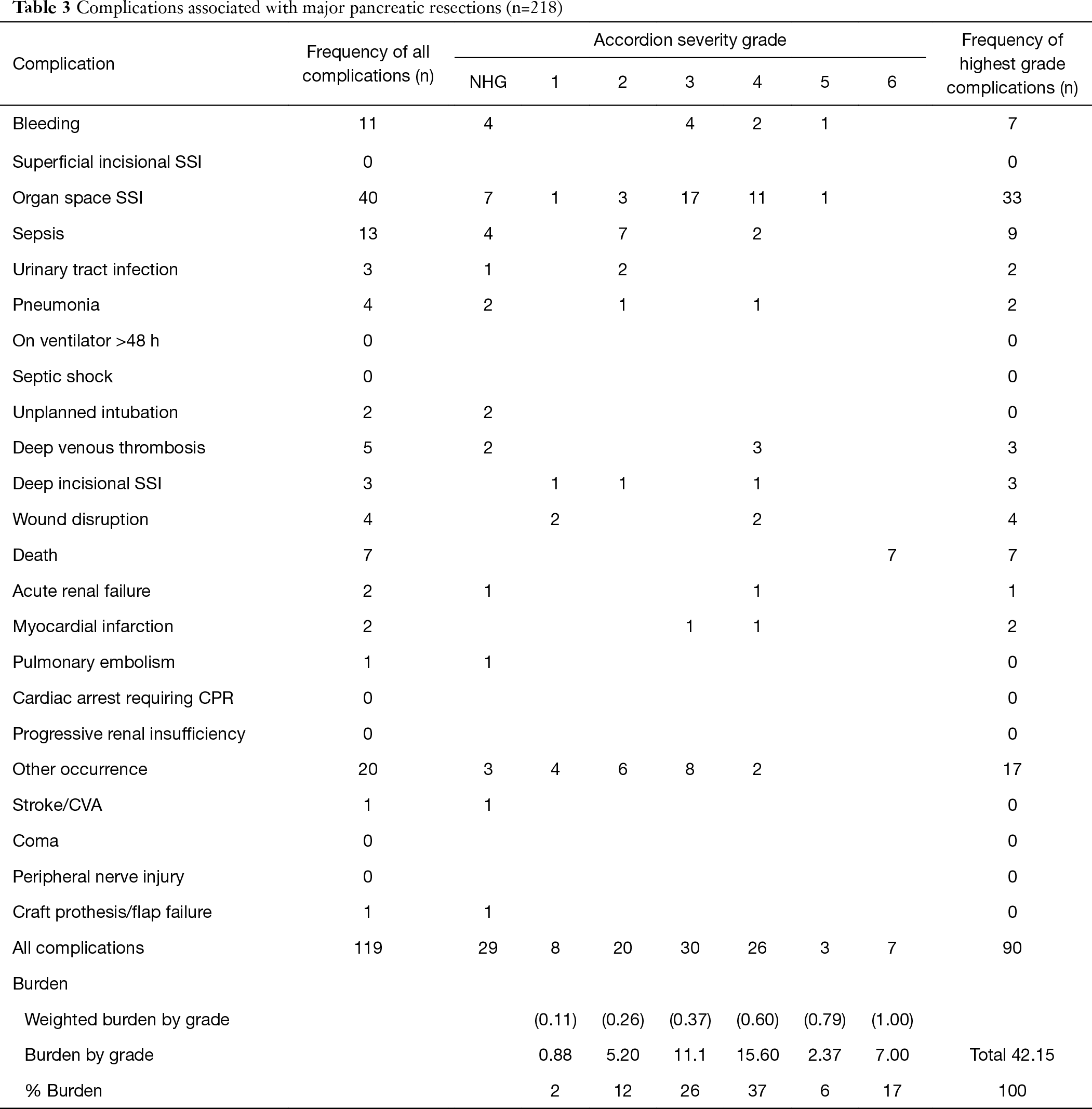 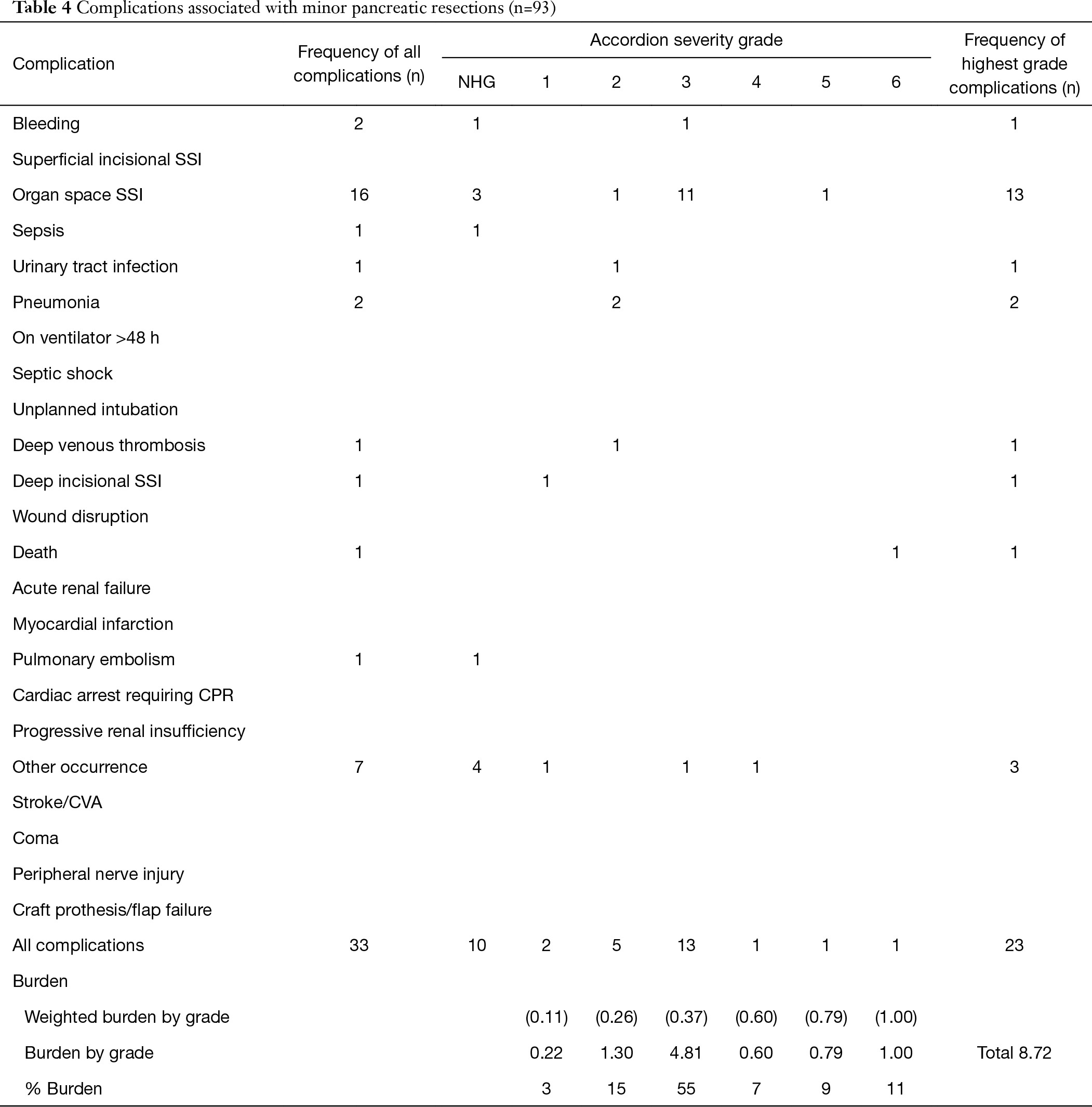 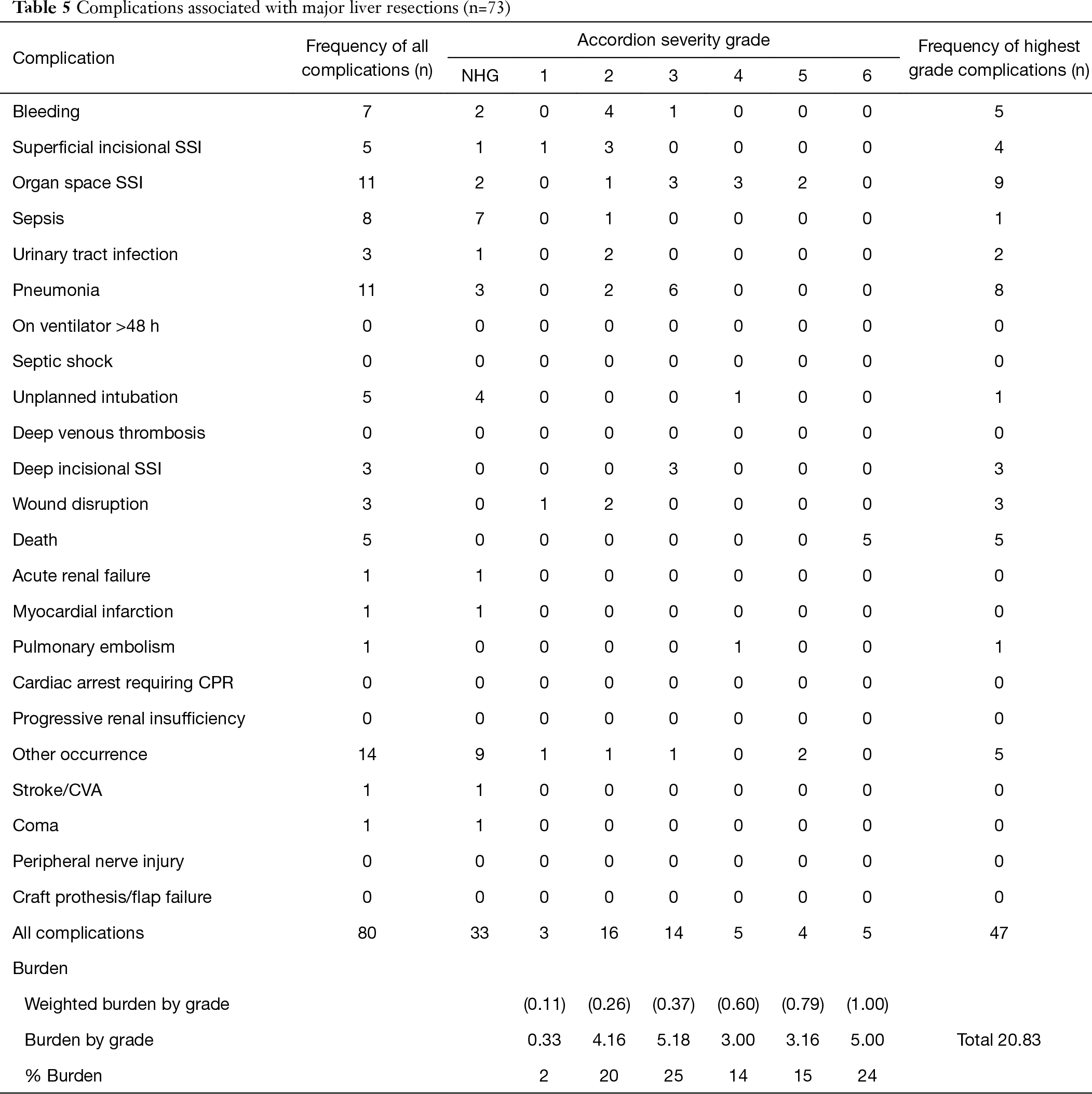 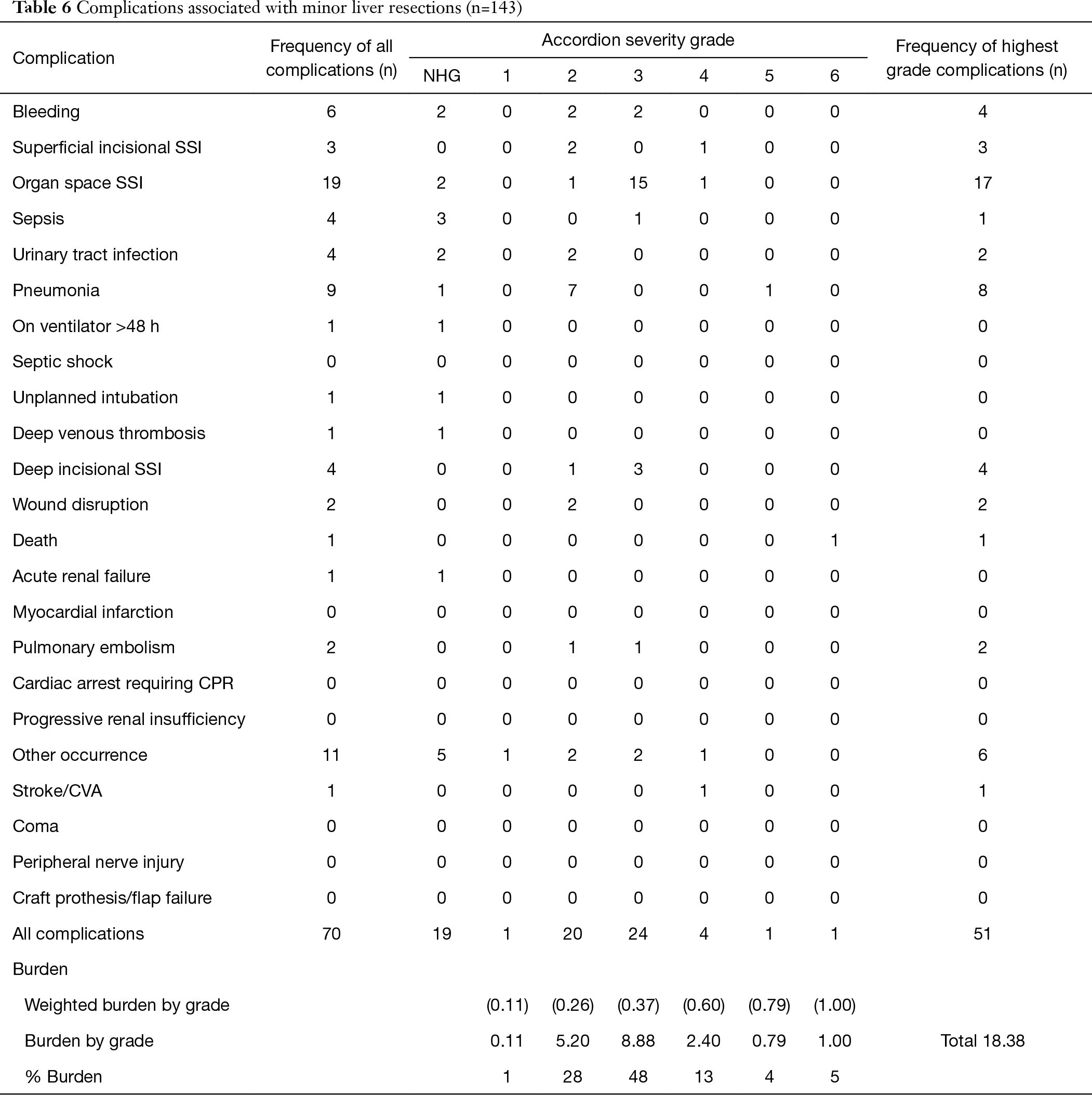 The study was approved by the Central Finland Hospital District. Because of the observational nature of the study, patient informant consent was not required.

Baseline characteristics of the study population

The mean annual number of pancreatic resections was 11 between 2000–2007 and increased to 22 from 2008–2017. Respective figures in liver surgery were 6 and 17. Patient characteristics, including comorbidities using the Charlson Comorbidity Index (CCI), are presented in Tables 1,2.

We also collected procedure-specific outcomes, not accrued by NSQIP methodology, to enable comparison of our results with those of other hospitals.

Particularly, the PMI of 0.192 for major pancreatic resections was relatively high compared with the results of the institutions involved in Vollmer’s benchmark study (1) or the results Strasberg et al. reported in 2011 (7). Vollmer et al. reported PMI varying between 0.097–0.239 depending on institution, whereas Strasberg et al. reported PMI 0.150 for a small sample of patients who underwent PD. In the present study, the proportion of complications “other occurrence” was significantly higher (16.8%) compared to papers mentioned earlier. “Other occurrence” consisted of complications like chylus leak, arterial thrombosis, arrythmia, and ileus in the present study. The low proportion of “other occurrence” (0.2%) in the benchmark study by Vollmer et al. indicates the possibility that such complications were ignored when focusing on NSQIP. Moreover, 5% of pancreaticoduodenectomies in the present study were performed with extended lymphadenectomy, a procedure that is known to be associated with higher complication rates (20). Nevertheless, the rate of pancreatic-specific non-NSQIP complications were congruent with rates reported earlier in the literature (1,21). Similarly, the overall morbidity of 41.1% in our study is equal to or lower than rates reported earlier in literature (10,16). The postoperative morbidity of patients who underwent minor pancreatic resection was low or equal when compared with the results reported earlier (8,22,23).

Strasberg et al. reported PMI 0.145 in 52 major hepatic resections (7), which is significantly lower than PMI 0.285 in our study. However, simultaneous bowel resection was performed in 19% of patients in our study, which is associated with higher complication rates and more serious complications (7,24). Furthermore, variations have been reported in complication rates after liver surgery in liver donors and recipients of liver transplant, with overall complications ranging from 27% to 80% and major complications ranging from 6% to 42% (2,25). Liver donors are, however, young and healthy people; in contrast, patients undergoing liver resection for malignant disease tend to be older, have comorbid conditions, and are often receiving neoadjuvant chemotherapy. Our postoperative mortality rate (2.8%) after liver surgery was in agreement with the range of 1.8–5.6% reported in population-based studies from Sweden and the United States, with ratios of major and minor resections very similar to our study (26). Furthermore, population-based studies (such as ours) tend to have higher morbidity and mortality rates than single-center reports, possibly due to selective reporting (26).

Our results should be interpreted with some caution, however. The major weakness of this study is the relatively small number of patients compared to large international patient series. The quantitative complication scoring system enables comparison between different operations and centers with exact thresholds for what actually constitutes a complication, but it also lacks data on procedure-specific complications (such as POPF and DGE after pancreatic surgery, and biloma formation and liver failure after hepatic surgery). These limitations have been recognized previously (28). For this reason, we reported procedure-specific complications separately as non-NSQIP complications, according to Vollmer et al. (1). The strengths of this study include prospective data collection, double checking of the hospital records by another researcher not responsible of treating these patients, and complete follow-up data. Moreover, all patients from a single geographic area were included in the study, making selection bias unlikely and illustrating the real-life situation. Treatment of late complications is conducted in our center, which is the only hospital in the area.

In conclusion, PMI appears to be an informative method to monitor outcomes in pancreatic and hepatic surgery enabling demonstrative comparison between various procedures and institutions. Our results are comparable with previous population- and registry-based results, but improvements are needed to achieve reported benchmark levels.

Conflicts of Interest: All authors have completed the ICMJE uniform disclosure form (available at http://dx.doi.org/10.21037/jgo.2020.04.03). The authors have no conflicts of interest to declare.

Ethical Statement: The authors are accountable for all aspects of the work in ensuring that questions related to the accuracy or integrity of any part of the work are appropriately investigated and resolved. The research was conducted in accordance with the Declaration of Helsinki (as revised in 2013). The study was approved by the Central Finland Hospital District. Because of the observational nature of the study, patient informant consent was not required.