Laparoscopic techniques were adopted by general surgeons in the 1980s with subsequent adaptation to colorectal surgery in 1991 (1). The robotic approach was introduced to colorectal surgery in 2002 (2,3) and upgrades in the robotic platform have resulted in recent increased adoption by colorectal surgeons. Subsequent studies demonstrated improved minimally invasive short-term post-operative outcomes, with earlier return of bowel function, lower analgesia requirements, and shorter hospital length of stay (4,5). Data have also demonstrated equivalent oncologic outcomes for patients undergoing minimally invasive colon resections when compared to open operations, with associated decreased post-operative morbidity (6,7). Recent data suggest a continued increase in the use of minimally invasive approaches for both benign and malignant colorectal disease (8).

How to restore intestinal continuity and create a superior anastomosis is still a topic for consideration in colorectal surgery. Minimizing infectious complications that include anastomotic leak, post-operative abscess, and surgical site infection is imperative, but decreasing time to discharge and quicker recovery are also key outcomes. Minimally invasive ileocolic and colorectal anastomoses may be performed using intracorporeal (or total laparoscopic/robotic) or extracorporeal (or laparoscopic/robot assisted) techniques. This article is a review of operative techniques for both intracorporeal anastomosis (IA) and extracorporeal anastomosis (EA), and an examination of published data comparing each approach.

Descriptions and critiques of anastomotic techniques

For right colectomies, after complete mobilization of the terminal ileum, cecum, ascending colon, and proximal transverse colon, an upper midline incision is typically made by extending the camera port incision along the midline. The mobilized ileum and colon are then exteriorized after insertion of a wound protector. The terminal ileum and transverse colon are divided and the ileocolic anastomosis is constructed using standard open techniques. Some surgeons divide the mesentery and vessels laparoscopically or robotically prior to exteriorizing the specimen and performing the extracorporeal resection and anastomosis. Others perform various parts of mesenteric and vessel division after exteriorization of the specimen and prior to bowel division and anastomosis.

After division of the specimen, an extracorporeal functional end-to-end anastomosis is then constructed by aligning the ileum and transverse colon in an isoperistaltic or antiperistaltic fashion. Enterotomies are made in the ileum and transverse colon and a linear cutter 55 or 75 mm blue load stapler is placed through these enterotomies and fired, thereby creating the anastomosis. The common enterotomy is then sutured closed in one or two layers.

For left colectomies, after adequate mobilization, the upper rectum is transected using a laparoscopic or robotic linear stapler. A midline or Pfannenstiel incision is made, a wound protector is placed, and the proximal end of the transected bowel is delivered through the incision thereby exteriorizing the specimen still attached to the proximal colon. The specimen is resected using standard open techniques. A circular stapler anvil is secured in the open proximal end of soft and pliable colon using a purse string suture. The colon with secured anvil is returned to the abdominal cavity and pneumoperitoneum reinstituted. The circular stapler is passed through the anus and coupled with the anvil in the proximal colon, and an end-to-end anastomosis is created either laparoscopically or with robotic assistance. The anastomosis is tested for leaks using endoscopic air insufflation with saline in the pelvis, and endoscopic viability is confirmed on both sides of the anastomosis.

Exteriorization of the proximal and distal bowel with attached specimen allows for visual inspection and palpation prior to resection and anastomosis. Some surgeons think this may help confirm healthy, soft and viable bowel for anastomosis and confirm appropriate margins for oncologic resections. Since bowel transection and creation of the anastomosis occur outside of the abdominal cavity, there is potentially a decrease in risk of intra-abdominal spillage of colonic contents related to this technique.

Because of the need to exteriorize the bowel for resection and anastomosis, significantly more bowel and mesentery must be mobilized to obtain adequate reach for specimen resection and anastomosis, especially in obese patients with thick abdominal walls. For right hemicolectomies, exteriorizing the transverse colon to a small midline specimen extraction site may be challenging with risk of traction injury to bowel or mesentery. This may result in serosal injuries, mesenteric bleeding, and devascularization of bowel and mesentery that may potentially contribute to post-operative ileus (9). The transverse colon may not reach the extraction site easily and the midline incision may need to be lengthened to accommodate. Many surgeons use a midline extraction site for extracorporeal right colectomies. The midline site is associated with a significantly higher rate of incisional hernias (8–12%) with associated long-term morbidity when compared to off-midline extraction sites (10,11).

For right colectomies, an intracorporeal ileo-transverse colon anastomosis is typically chosen for the minimally invasive approach (see Figure 1). Following complete medial-to-lateral and lateral-to medial mobilization of the ileum and colon, and complete detachment of the mesentery from the retroperitoneum, the terminal ileum and transverse colon are transected using a laparoscopic or robotic linear cutter stapler. The ileum and transverse colon are aligned in either an isoperistaltic or antiperistaltic configuration. A seromuscular stay suture is placed between the ileum and transverse colon and retracted toward the right side of the abdomen to optimize alignment. A colotomy and enterotomy are then made and the linear cutter stapler is placed and fired, creating the anastomosis. The common enterotomy is then closed with suture in one or two layers. The specimen is then removed via a small Pfannenstiel or other off-midline incision.

Figure 1 Intracorporeal anastomosis for right hemicolectomy. The ileum and colon are aligned with a seromuscular stitch and retracted toward the right side of the abdomen (upper left). A colotomy and enterotomy are then made and the linear cutter stapler is placed (upper middle) and fired, creating the anastomosis (upper right). The common enterotomy (lower left) is then closed with suture in two layers (lower middle and right). 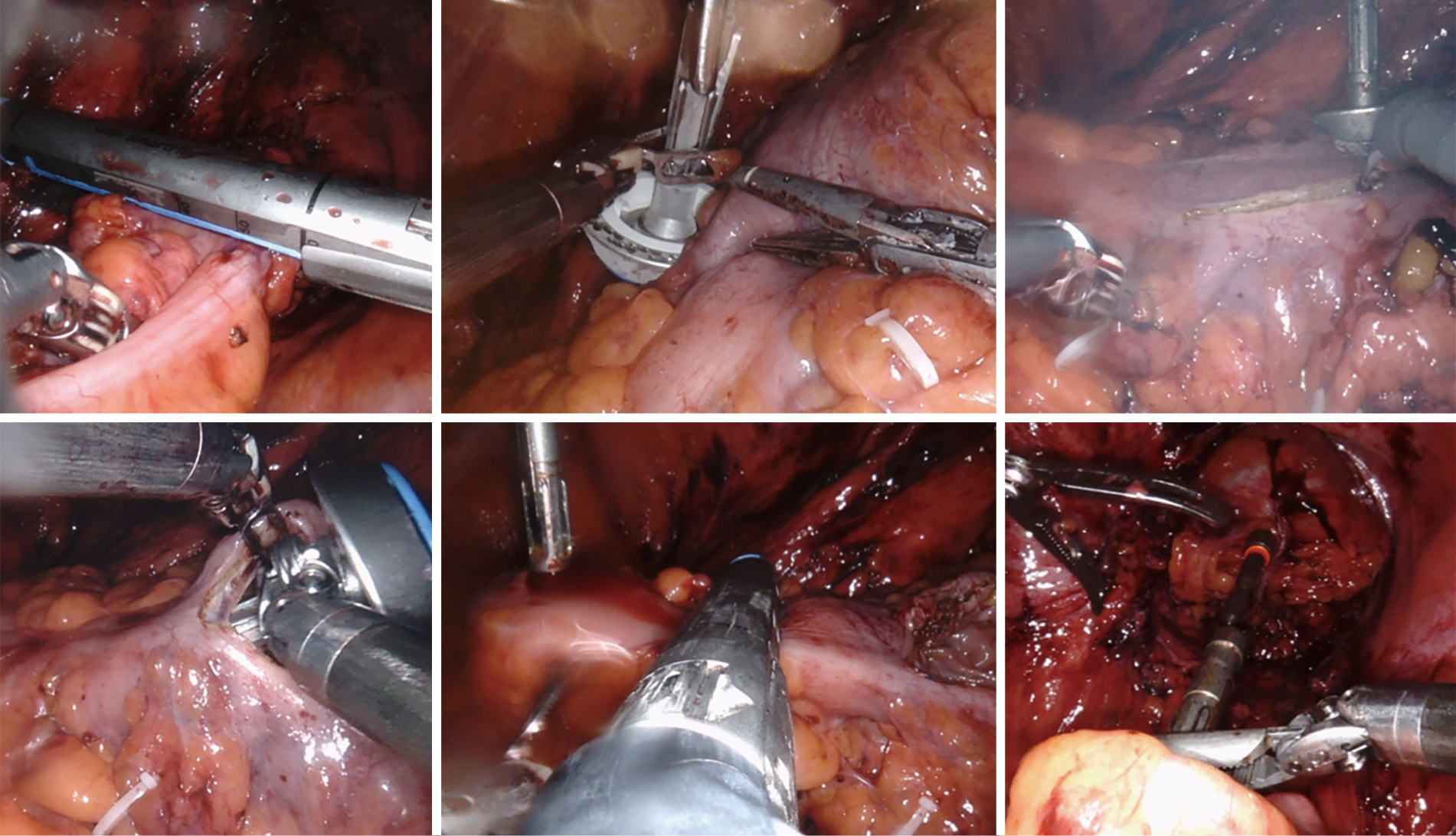 Figure 2 Intracorporeal anastomosis for left hemicolectomy. The rectum is divided using a linear cutter stapler (upper left). The anvil is then passed into the abdomen through the extraction site incision (upper middle). A 3–4 cm colotomy is made distal and a 6 mm colotomy is made proximal to the proposed point of transection (upper right). The anvil is passed through the long colotomy and the anvil shaft routed through the small colotomy (lower left). The colon is divided at the proposed transection site (lower middle). The circular stapler is passed per anum and coupled with the anvil to create a side-of-colon to end-of-rectum anastomosis (lower right).

Since the specimen transection is intracorporeal, palpation of the bowel prior to transection is not performed and some consider this a disadvantage. Additionally, the enterotomies for the anastomosis are created intra-abdominally, exposing the peritoneum to potential intraluminal contamination. However, no studies have demonstrated an increase in surgical site infections and sepsis when comparing IA and EA groups (9,12).

Table 1 displays single and multi-institution studies that compare outcomes for minimally invasive IA and EA right colectomies. Many studies show favorable outcomes for IA, demonstrating decreased conversion-to-open operations, shorter gastrointestinal recovery time, shorter hospital length of stay, and decreased postoperative complications, including both short-term (surgical site infection, anastomotic leak, and ileus) and long term (incisional hernia and small bowel obstruction) complications (9,13,15-18) when compared to EA. Operative times in the IA group were longer than in the EA group in most of these studies (9,15,17).

Literature describing the intracorporeal technique for left sided colorectal resections has recently emerged and is the standard technique taught at the national colon and rectal surgery residency robotics course sponsored by the Association of Program Directors for Colon and Rectal Surgery (12,20). Table 2 displays studies that compare IA and EA for minimally invasive left colectomies. These retrospective studies demonstrated faster recovery of bowel function, decreased post-operative complications, and shorter length of stay in the IA group vs. the EA group for patients who underwent minimally invasive left colectomies (21-24). Further, a propensity score-matched comparison of 57 intracorporeal and 57 extracorporeal sigmoid resections showed that there were fewer conversions in the intracorporeal group (5.26% vs. 19.3%, P=0.029). In addition, there were fewer extraction site hernias in the intracorporeal group (0% vs. 10.53%, P=0.027), likely because there were fewer midline extraction site incisions (8.77% vs. 38.6%, P<0.001) in the IA group (12). The authors suggest that the greater number of midline extraction sites in the EA group may be related to the difficulty mobilizing colon with attached specimen to a Pfannenstiel or other off-midline extraction site incision. In addition, extraction sites for conversion-to-open cases are typically midline and there was a higher conversion rate in the EA group (12).

The technical difficulties encountered with traction injury and mesenteric bleeding while attempting to make the transverse colon reach the extraction site during an extracorporeal right colectomy may also be relevant for extracorporeal sigmoid resections when struggling to mobilize the left colon to an extracorporeal location at the extraction site incision. In contrast to the right colectomy studies comparing IA vs. EA, however, there were no consistent significant differences in time to gastrointestinal recovery, hospital length of stay, 30-day complications, and readmissions between groups in the studies comparing these anastomotic techniques in left colectomies (12,21-24). Additionally, operative time was significantly longer in the IA group (12,22). These studies suggest that the IA approach for sigmoid resection is safe, has some outcomes advantages, and warrants further analysis.

Meta-analysis of right and left colectomies

There is a paucity of literature comparing robotic and laparoscopic minimally invasive approaches for IA and EA. Studies comparing robotic IA with laparoscopic EA showed favorable outcomes for the robotic approach but it may have been the IA technique rather than the robotic approach responsible for the favorable outcomes (26,27). IA advantages are demonstrated by surgeons capable of minimally invasive suturing techniques. IA with the robotic platform is likely available to more surgeon skill sets than laparoscopic IA because of robotic articulating instruments and ergonomic advantages (9).

Conflicts of Interest: Both authors have completed the ICMJE uniform disclosure form (available at http://dx.doi.org/10.21037/jgo.2019.12.02). The series “Current Strategies in Colon Cancer Management” was commissioned by the editorial office without any funding or sponsorship. Robert K. Cleary has received honoraria from Intuitive Surgical, Inc. for educational speaking. Rebecca F. Brown has no other conflicts of interest to declare.